“RURAL AMERICA DESERVES ART, it deserves to be heard,” says Natalie Binder, founder of a new glamping hub-meets-artists haven outside the tiny town of Naturita, Colorado.

Binder is on a mission to bring engaging art installations and world-class hospitality to rural western Colorado. Her new glamping resort Camp V opened to travelers in April, 2021. Its name is taken from the old mining site that the area was named for — Vancorum. Nowadays visitors discover large-scale artworks combined with live performances, campfires, and on the best nights, inspiring stories bellowing from intrepid travelers who somehow, someway, have made their way to “the middle of nowhere.”

Most stay overnight in the property’s cabins and glamping tents. Some are curious road trippers interested in the art. Others are mountain bikers, hikers, or yogis, attracted by nearby trail systems and the tranquil vibes of an artsy riverfront property. Quirky events include the aptly named Burning Van festival, which took place in early September. The property has become known for hosting multiple pieces of art from Burning Man.

The property is a combination lodging art hotel for “spirited wanderers,” as its site proclaims, and a gallery of vagabond art. Some of this art debuted at Burning Man. Others are created especially for Camp V. 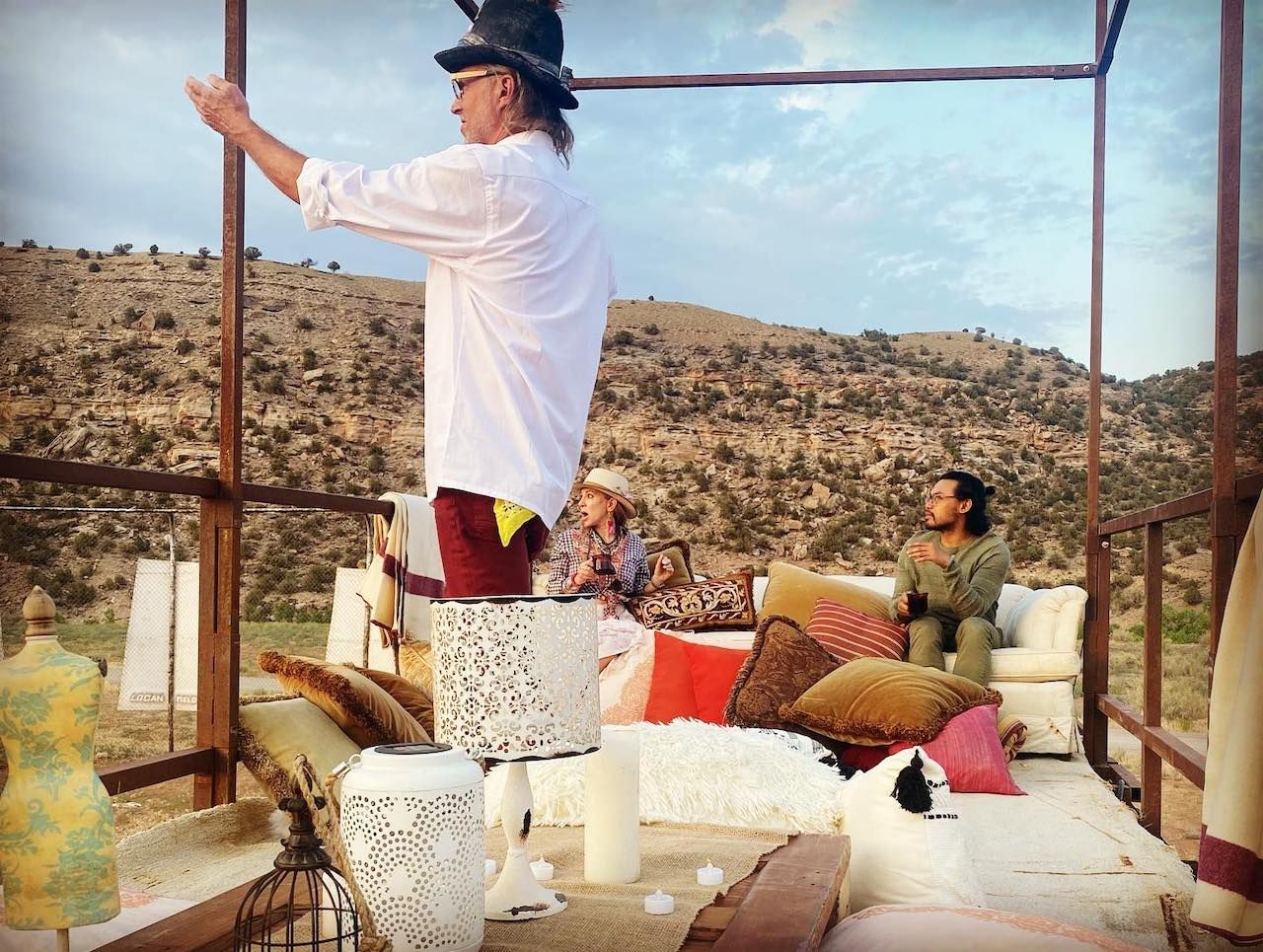 For Binder, creating a scene for artists, musicians, and outdoors-people here seemed like the best way for her to give back to a place she cares about deeply. Binder’s family have owned businesses and land in the area for multiple generations. Upon first arrival some 27 years ago, there was no place to stay in Naturita itself. Binder instead spent a lot of time in the nearby resort town of Telluride.

“That was really the last employer in the area,” Binder says, acknowledging the tough transition the town is currently undergoing from an extraction economy to a recreation-based one. “I grew up in an extraction economy, and I very much understand both sides. My family was in the mining business. But in a community like this, they don’t have a choice — the decision is made.”

As regional discourse had it, Naturita was over. Telluride had the big-money hustlers and Durango had the Texas crowd, and what was left sure wasn’t going to head north onto the no man’s land of Wright’s Mesa. But Binder knew there was something to be done here in rural western Colorado. She drew from her family’s long run of entrepreneurialism in the area and her own background in hospitality — she had spent years managing high-end vacation properties — and identified a piece of land she felt could work for a lodging concept.

“It was rough, like really rough,” Binder says of both the property and the town following the coal plant’s closure. “There was a lot of drugs, a lot of junk sitting around. I called my family to tell them I’d found a piece of property and they were like, ‘Good luck!’”

Binder bought the property anyway. The concept of Camp V had an actual, physical home. Binder capitalized on the Opportunity Zone investment fund from the state of Colorado, launched to provide funding to start-ups in rural areas. With this money, she was able to retrofit the run-down cabins and clean up the property.

“We started a non-profit for the area called West End Art,” Binder says. “That’s where the Burning Man vibe comes from. I’ve been to Burning Man, and have friends that had art. The concept was, how do we start supporting artists and also bring in cool art?” 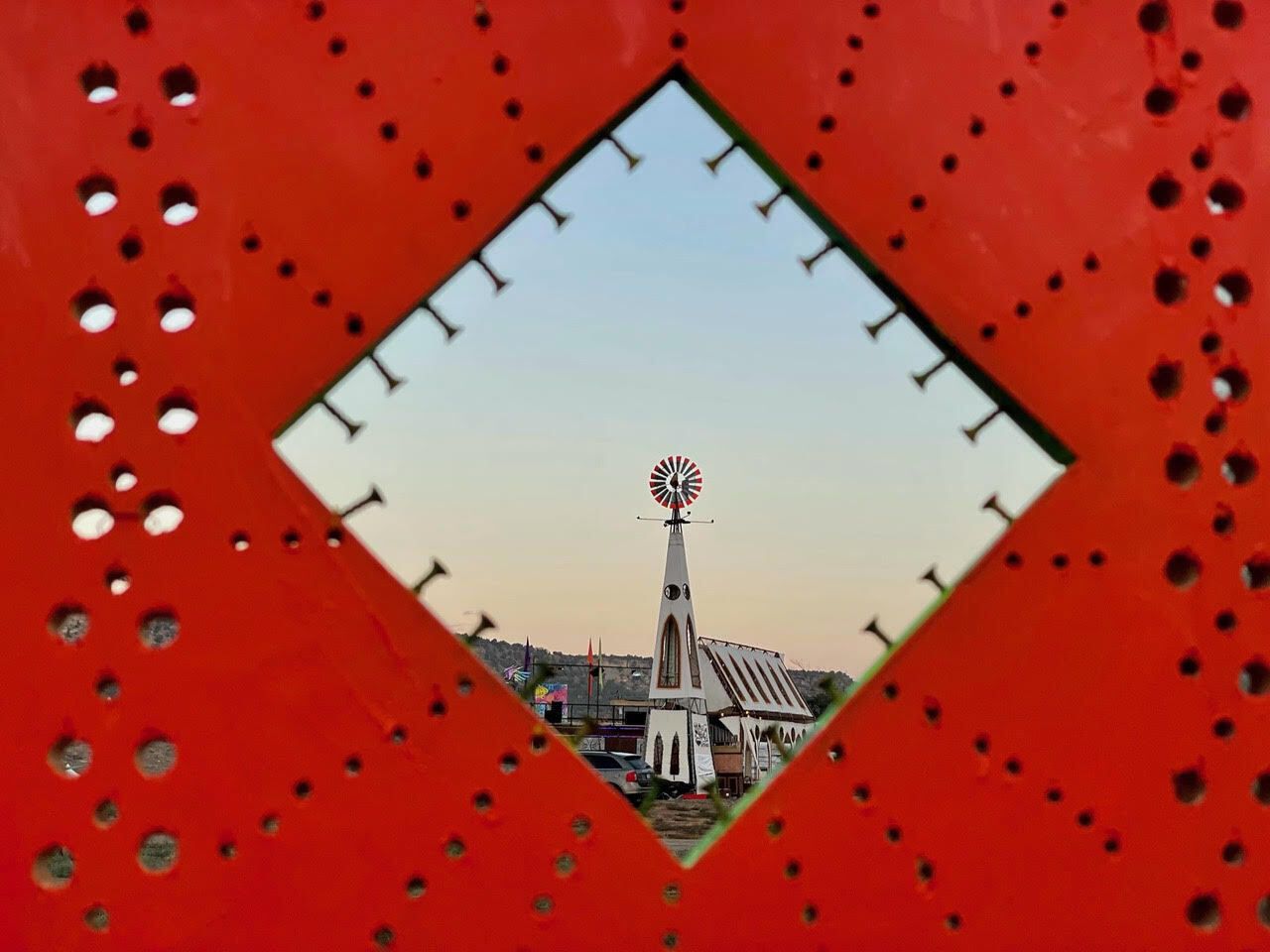 Binder’s community of artists jumped on board, excited at the prospect of using their art to stimulate the economy of a place in need. Finding a home for large artworks during the 51 weeks per year when Burning Man isn’t happening surely appeals to a few of the artists, as well. Three pieces of art now at Camp V have been to at least one Burning Man. The Wind Chapel has been to two Burning Mans before being welded to its permanent home at Camp V. The Pariah Art Car is another popular attraction and one whose owner plans to bring it back to Burning Man when the festival returns to the Nevada desert. Visit during a special event and you may actually get to enjoy dinner on the car. A second piece by the same artist, The Wind Harps, has also been to Burning Man.

Camp V also hosts a number of reclaimed pieces of material from the coal mine and power plant that have been turned into art. This was Binder’s way to weave the area’s history into the area and pay homage to the locals and to her family’s roots in Naturita.

Visitors to this varied art hotel can hook up an RV and camp for as little as $45 per night. Studio rooms in a cabin run about $165 per night, and a campsite buyout for up to 20 people runs $450. In-between options include wilderness camping an Airstream trailer, and a two-bedroom cabin. Guests have access to a swimming pond and glamping tents. There’s plenty of space to barbecue and lounge over beers. Binder frequently hosts live music and other performances. And, of course, there’s the art. The overall experience falls somewhere between a cozy mountain retreat and actually being at a festival.

“People who come here, they understand our mission,” Binder says. “They want to further this transition to a recreation-based economy.”

There’s now a bike shop and an adventure rental company in town. Hunters make their way to western Colorado each fall, packing local pubs and restaurants as well as campsites and hotels. Increasingly, Binder finds others like her with the forward vision to recognize the area’s future as a recreation hub. Up the road in Norwood, a new mountain bike trail system is drawing visitors and the entire region has acquired Dark Sky Sanctuary status via the International Dark Sky Association.

The future looks bright for Camp V and the artists and travelers who make it here. The property just opened a new exhibit called “The Unknown Zone” from an artist called Mindbender, and plans to debut and host several exhibits in the coming months.

11 Scottsdale Airbnbs With Pools for a Southwestern Escape