Colorado IS AMONG the top destinations in the country to experience the great outdoors. Thing is, most of the common activities — camping aside — typically take place during the day, and center around the state’s mountains or desert canyons. One of the best things to do here, though, is to grab a blanket, park somewhere remote, and gaze up at the sky.

A collection of small towns in southern and western Colorado have banded together to make this experience more epic than ever, creating an astronomical road trip called “Colorado Stargazing: Experience the Night.”

Fourteen areas across the state — five colorado towns and nine remote areas — have earned Dark Sky Sanctuary status from the International Dark Sky Association. This road trip takes you to the best places to stargaze in Colorado, beginning in the western Colorado town of Norwood and ending further east in Westcliffe. How long you spend en route is up to you — but we recommend taking it nice and slow. Few road trips are so easy to access while taking you so far away from big-city life.

“There’s not a whole lot of civilization here,” John Metzger, President of the Norwood Chamber of Commerce, tells me. “And the skies are about as dark as anywhere on earth, because of the altitude combined with the dryness. There’s nothing in the way — a lot of clear skies.” 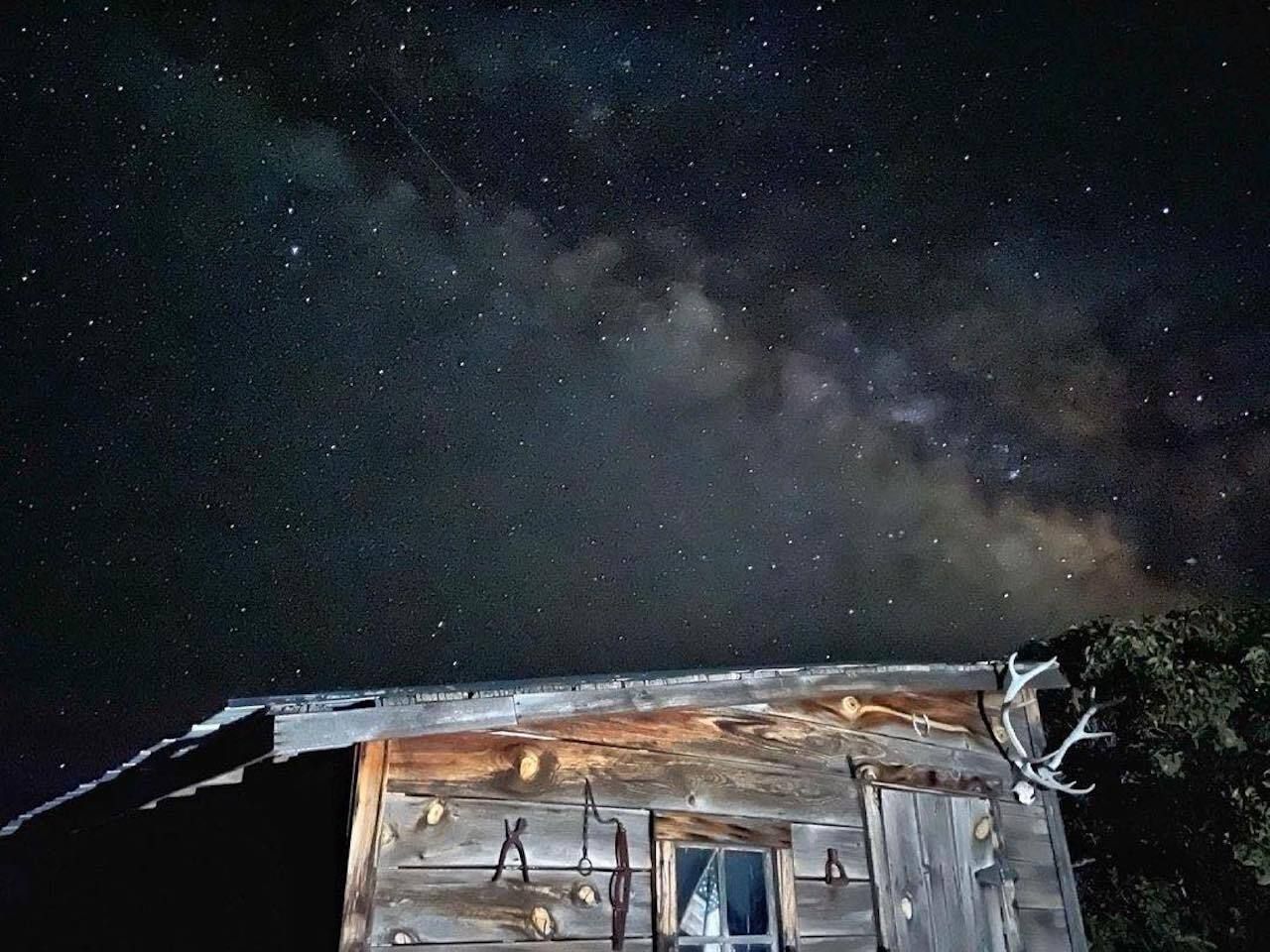 On Wright’s Mesa, along the western end of the San Juan Mountains, three small towns have banded together to form a Dark Sky mega-spot. Norwood became a Dark Sky Sanctuary in 2019 and is the primary hub in the area, home to some 800 residents. Along with its IDA designation, the town has developed hiking and mountain biking trails to attract outdoor enthusiasts looking for a more affordable place to visit than nearby Telluride. But it’s the IDA certification that has bonded this town with other remote locations across Colorado — although you could combine two interests and look up during a nighttime hike.

People come here who “have never even seen the Milky Way,” Metzger says. “And their reaction is always, ‘Wow.’ It just sort of complements everything you do around here.”

Just past Highway 145’s merger with Highway 141, the town of Naturita and neighboring Nucla received their IDA designation this year. The high alpine environment of the San Juan and Sangre de Cristo Mountains along with the San Luis Valley that separates them, and you have the recipe for an unforgettable Colorado stargazing road trip. Here’s how to make it happen, from Norwood to Westcliffe

Following the above map, our Colorado stargazing road trip kicks off in Norwood, about 45 miles from Telluride.

“There’s so much vastness and expanse of territory, and above it all is this unbelievable sky,” Metzger says. “It sort of turns into something bigger, into a sort of Colorado Dark Sky corridor.”

The Unaweep-Tabeguache Byway, Highway 141, connects Norwood to Gateway and eventually Grand Junction, a beautiful stretch of Slickrock canyon reminiscent of Moab and its surrounding national parks. The stars are viewable anywhere en route.

The Thunder Trails have designated dispersed campsites that make for a great place to stargaze, with the bonus of taking a morning hike or bike ride on the trails. Lone Cone Peak is visible in the distance, with Miramonte Reservoir offering camping closer to the peak. Or opt for an artsy, Burning Man-esque vibe at the recently refurbished glamping resort, Camp V. 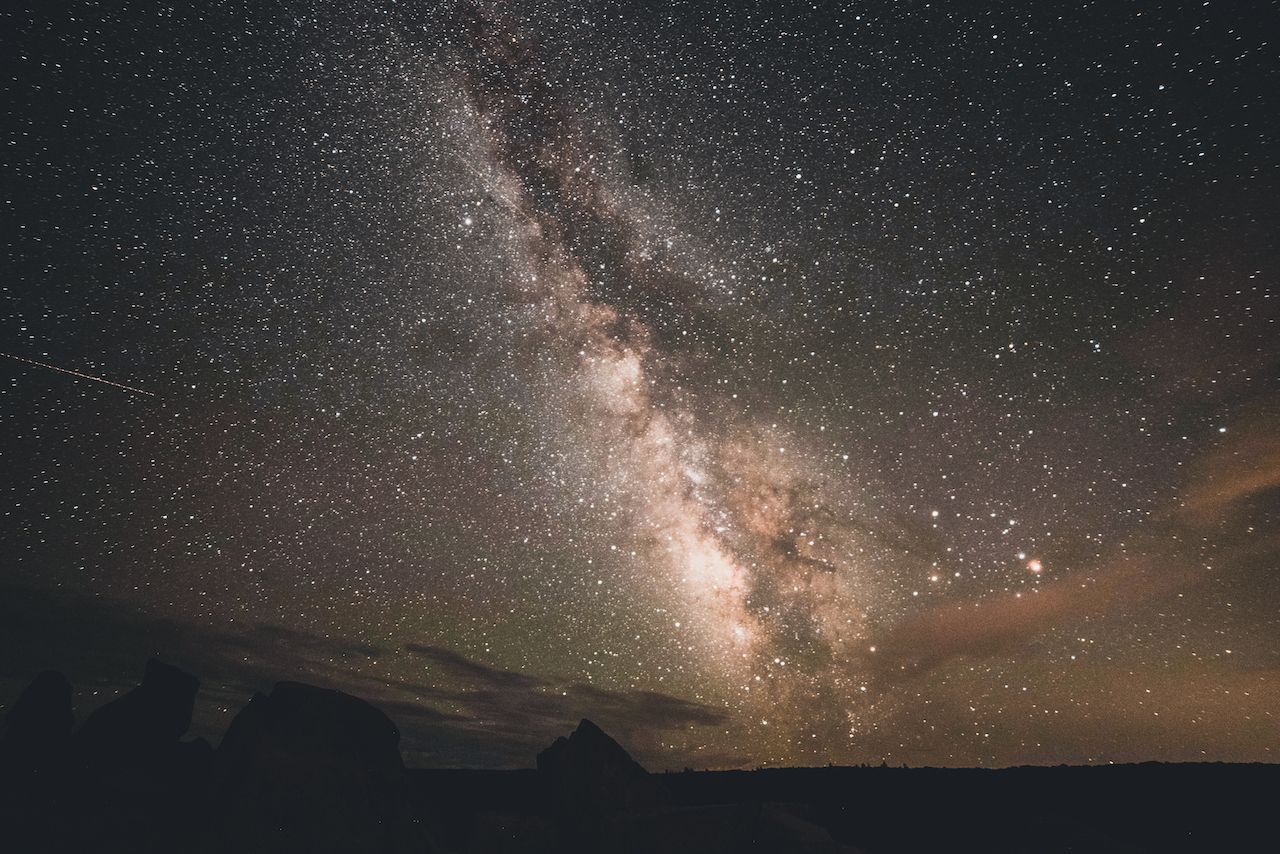 Gunnison is the biggest town on this route, the hub of the Gunnison Valley and the gateway to the ski town of Crested Butte. Hartman Rocks Recreation Area is the best place to stargaze near Gunnison. This desert scape features numerous trails at which to get away from any present crowds, but you can also just pop the hatch on your vehicle and gaze at the stars from the parking lot. Gunnison stargazers also head to Taylor Canyon and Blue Mesa Reservoir. If visiting on a Friday or Saturday night in summer, “Carpe Noctem” (seize the night) at the Gunnison Valley Observatory’s public viewing hours. Black Canyon of the Gunnison National Park, known for its steep and narrow Precambrian rock canyon carved by the Gunnison River, is a recent addition to the certified parks list, and certainly worth a stop and an overnight camp as well.

Creede is just over two hours south of Gunnison via CO 149. Knock back a brew at the town’s iconic Tommyknocker Tavern before heading up to camp and observe the stars from the Marshall Park Campground. Other popular stargazing spots include Love Lake and Pool Table Road.

Taking a Colorado stargazing road trip? Check out Matador’s guide to the best places to stay across the state: 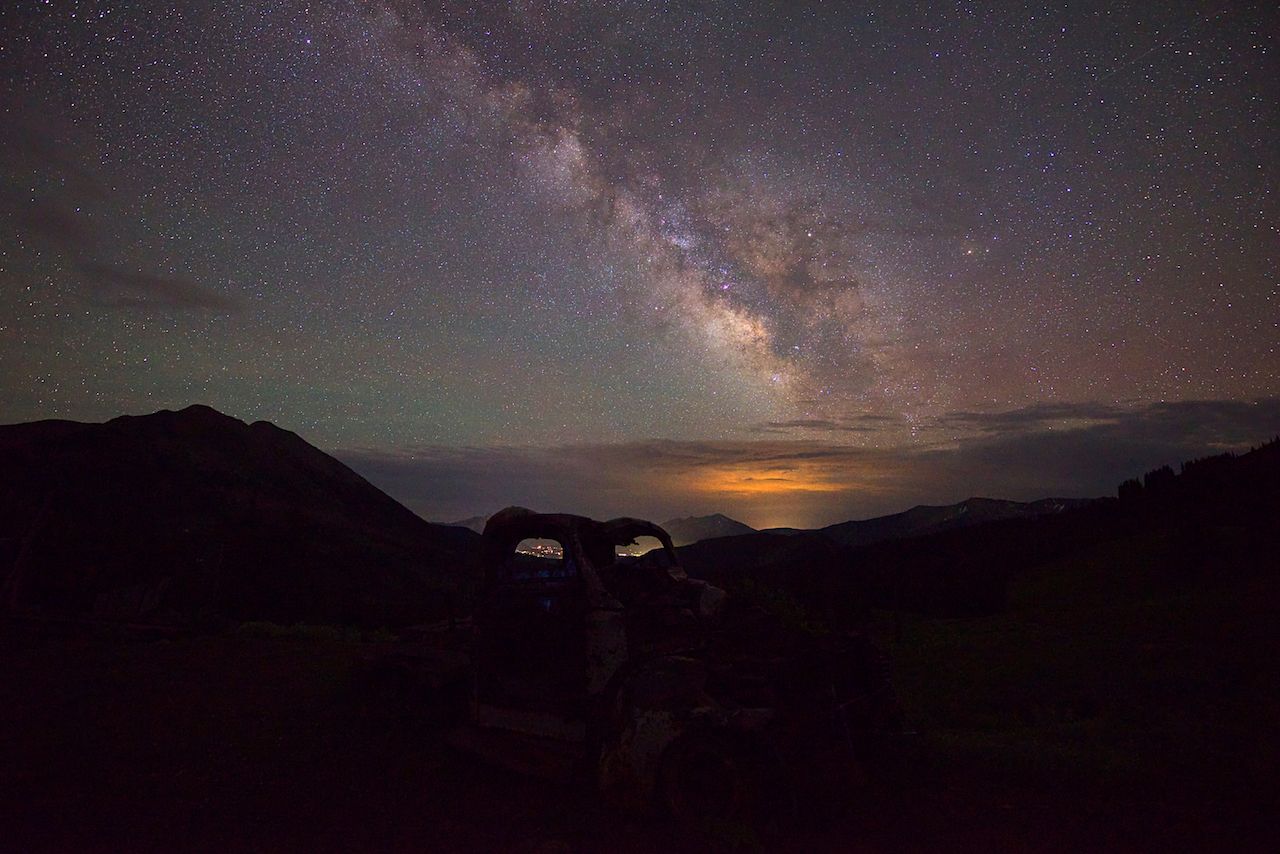 “Since 96 percent of our county is public lands, there are a lot of areas to go for high-quality stargazing,” says Philip Virden, owner of the Mountaineer Movie Theatre in Lake City and the head of the effort to bring Dark Sky Sanctuary status to the town.

Virden recommends the Windy Point overlook, seven miles south of Lake City, for the best viewing on most nights. Virden also notes that ss the town continues to gain traction as a stargazing destination, it plans to establish an official observatory site near Slumgullion Pass, which runs a tight course through the jagged San Juan peaks between Lake City and Creede, in the next year or two.

One thing Lake City has going for it is ample spots to camp. Public campgrounds range from well-heeled (by camping standards) private areas including Henson Creek and Highlander to dispersed wilderness campsites in the mountains surrounding town. In between are public campgrounds at Williams Creek, Mill Creek, and Deer Lakes, among others. 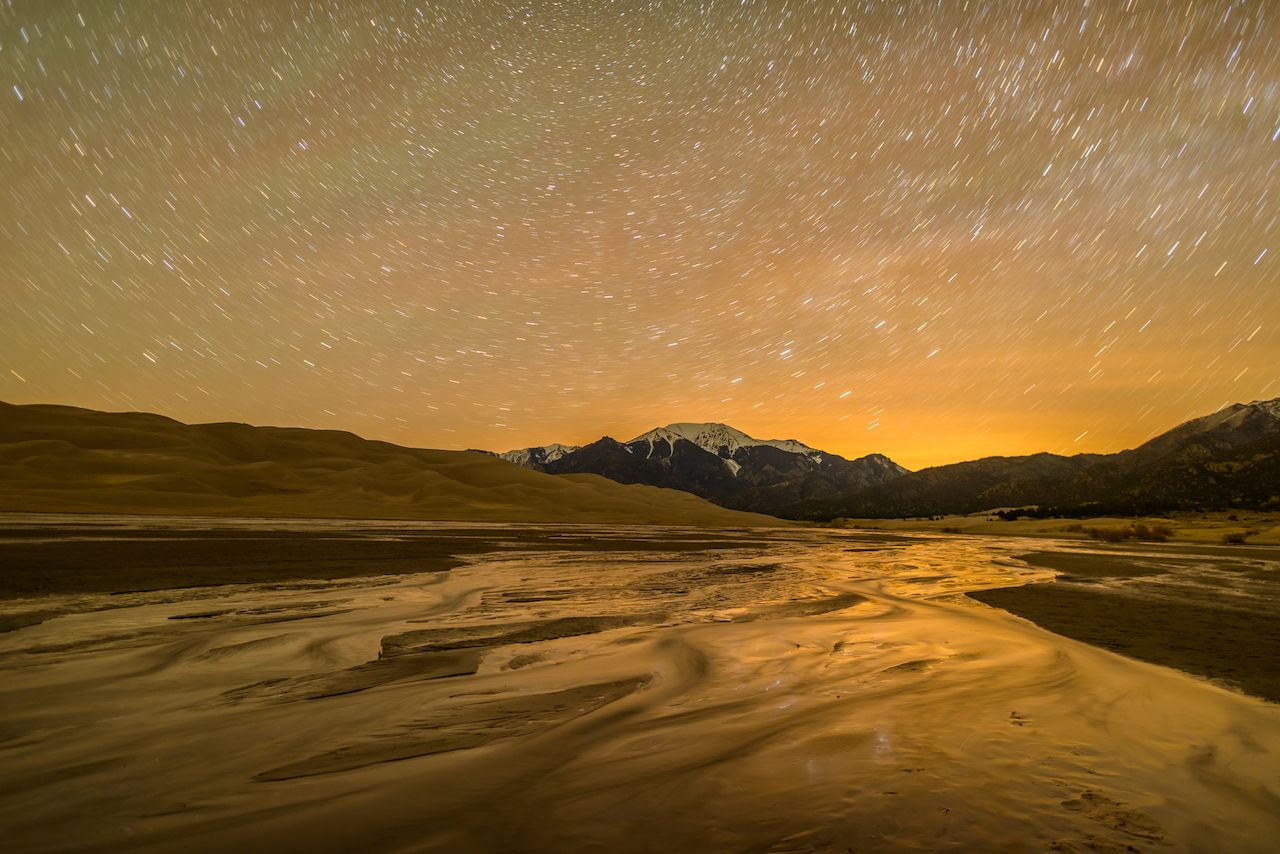 The Southern Colorado Astronomical Park, one mile outside of La Veta, is Colorado’s premiere place to learn about astronomical evolution and the practice of observing it. From here, you can watch the stars through telescopes from two domed observatories. You can also look at an ancient stone calendar and learn how the area’s original inhabitants learned to follow everything from time to the seasons based on the sun and stars.

Further afield in the Spanish Peaks Wilderness is Cuchara, where you can observe the stars from your campsite at either the Bear Lake or Blue Lake campgrounds. Stick around for an extra night and gaze from Cuchara Mountain Park. Or head to Great Sand Dunes National Park to embark on an evening hike up the dunes to watch the stars after the sun sets over the San Luis Valley to the west. 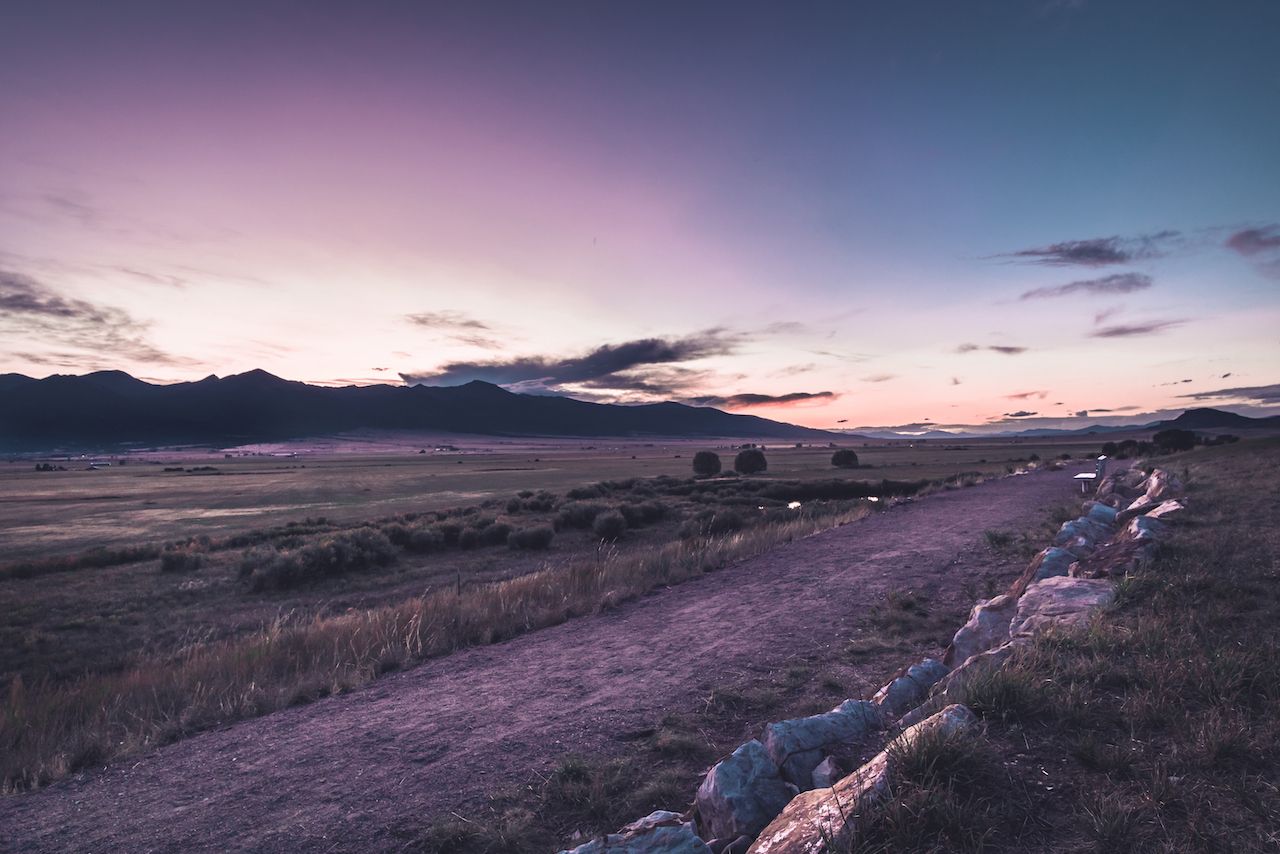 The Colorado Dark Sky Sanctuary road trip tour concludes with an arbiter of the divine. Crestone, a tiny hamlet north of Great Sand Dunes National Park, occupies a few football fields worth of space at the base of the Sangre de Cristo Mountains. The area is a popular pilgrimage for spiritualists, yogis, and the occasional UFO theorist, largely because of a route of spiritual sites known as the Camino Baca Grande. Before the sun goes down, you can visit a Tibetan prayer site called a Stupa, several Buddhist monasteries, Hindu ashrams, Catholic temples, and various other religious relics honoring nearly every major theological perspective prevalent in the world today.

It’s after dark, though, when this town of 86 permanent residents really lights up. From the Baca National Wildlife Refuge, gaze upward for uninterrupted views of the constellations lighting up the Sangre de Cristo Wilderness. The local’s hack is to book a room at Joyful Journey Hot Springs and then settle into a tub to watch the stars as you soak.

On the other side of the Sangre de Cristos, conclude your Colorado stargazing road trip at the state’s first Dark Sky Sanctuary, Westcliffe & Silver Cliff. The Smoky Jack Observatory is named for Suzanne B. Jack, who founded the group Dark Skys of the Wet Mountain Valley to lead the area’s IDA certification effort and found the observatory.

“Visitors can pretty much go anywhere in the county to enjoy the best stargazing,” says Custer County Tourism Board Chairperson Deb Adams. “Getting away from town and driving on any dirt road in any direction will have dark skies.” Adams particularly recommends Grape Creek Campground. Camping is free on the land surrounding Deweese Reservoir, or head into the Sangres to gaze upwards from the Alvarado Campground.

CyclingTake a Colorado Road Trip To the Rockies’ Most Overlooked Recreation Destination
Tagged
Astronomy Camping Road Trips Colorado, United States
What did you think of this story?
Meh
Good
Awesome