The Scenic Highway of Legends — known as the SHOL — is a 70-mile stretch of State Highway 12 between the southern Colorado towns of Trinidad and La Veta that serves as an exemplary demonstration of why visitors come to Colorado. Its rugged beauty earned it an official spot earlier this year in the National Scenic Byway system.

Running adjacent to the Spanish Peaks Wilderness, the SHOL crosses the pine-tree-lined Cuchara Pass and passes the clear waters of Monument Lake. Views extend across the billowing high country to the 13,626-foot West Spanish Peak and even higher mountains beyond. Various pull-off points lead to trailheads popular with local hikers and bikers that meander into the dense forest, and off the main highway to the jagged 11,248-foot summit of Cordova Pass. In winter, many of these trailheads offer access to backcountry skiing and snowshoeing.

Spanish Peaks Country — named for the two tall peaks that have also been called Indigenous names and Twin Peaks in years past — is the type of place families love to seclude themselves in for a week, and that alpine adventurers could disappear to for a lifetime (a handful have.) The thing is, the average traveler is stuck in traffic on the I-70 corridor and never makes it down here. The mellow mountain waters of the Purgatoire River are often the role of sole accomplices to those stopping en route to experience one of Colorado’s remaining truly wild places.

The time has come to break the mold. You don’t need to stay in Spanish Peaks Country forever. But you should stay long enough to scuff up a good pair of hiking boots. Here’s how to do so. 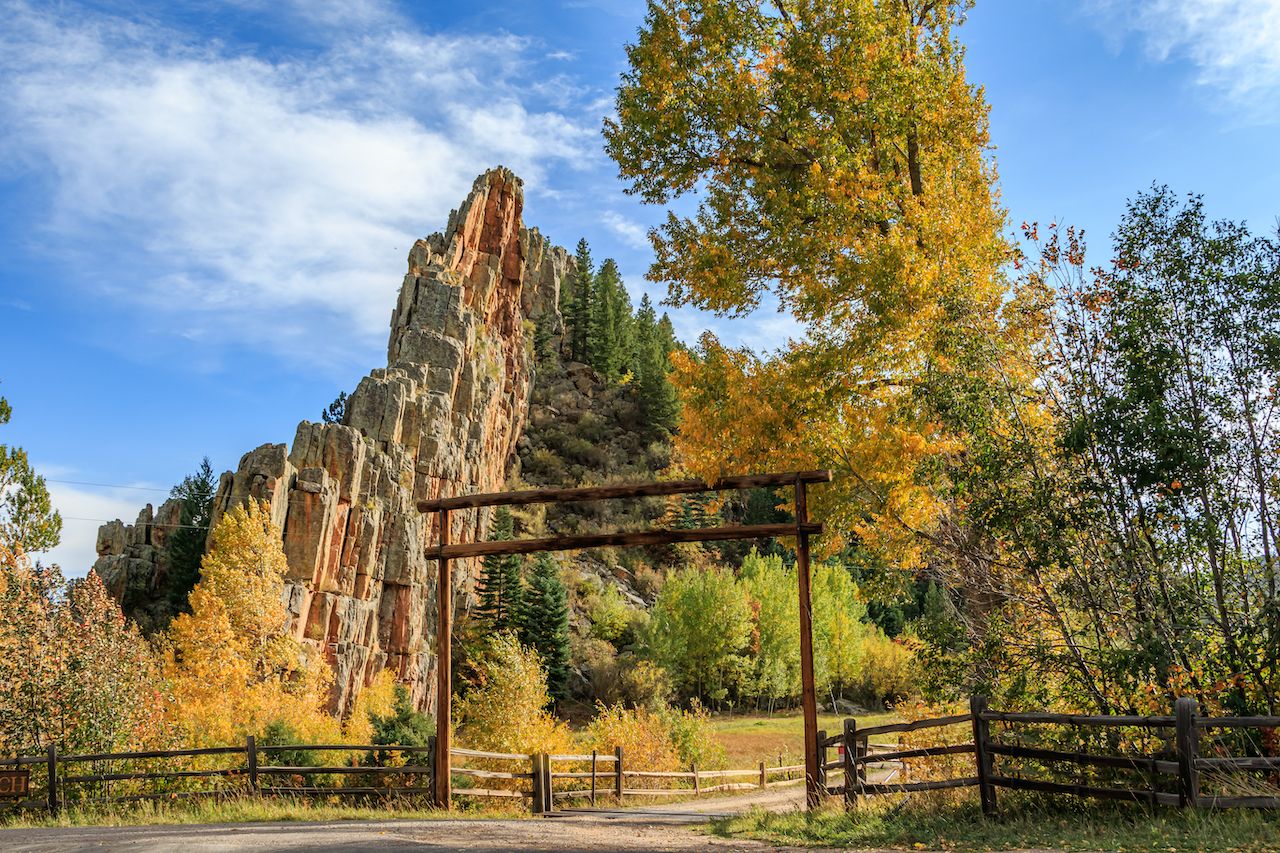 Just over two hours south of Denver, where Interstate 25 meets US Highway 160, the entrance to Spanish Peaks Country passes through the town of Walsenburg and heads west, turning onto Highway 12 toward La Veta just past Lathrop State Park. The Sangre de Cristo and Wet Mountains traverse the region with multiple 13,000 and 14,000-foot peaks.

Bob Kennemer is among the handful of hardy outdoors types who came to the area once, felt its magnetic pull, and couldn’t resist the urge to pack up a few pieces of gear and establish a permanent presence. He moved to the area in the 1980s and now lives in a passive solar home in La Veta.

“Spanish Peaks Country (SPC) has a primary asset that very few, if any, places in Colorado can still honestly boast that being; we are still very unknown and untouched,“ Kennemer says. “Like most of Colorado, tourism makes up close to half of our local economy, with Ag being right up there neck in neck.”

Kennemer, a Regional Disaster Recovery Planner with the Southern Colorado Economic Development District and chair of the local tourism organization, noted that the region’s tourism economy is growing but remains far below the levels of the resort towns farther north — a fact the local population whole-heartedly embraces.

“One can still hike trails here, climb peaks, [mountain] bike, ski/snowshoe and see few people or even no one at all,” Kennemer says. “But because we don’t have crowds we lack a lot of big city/tourist town amenities.” 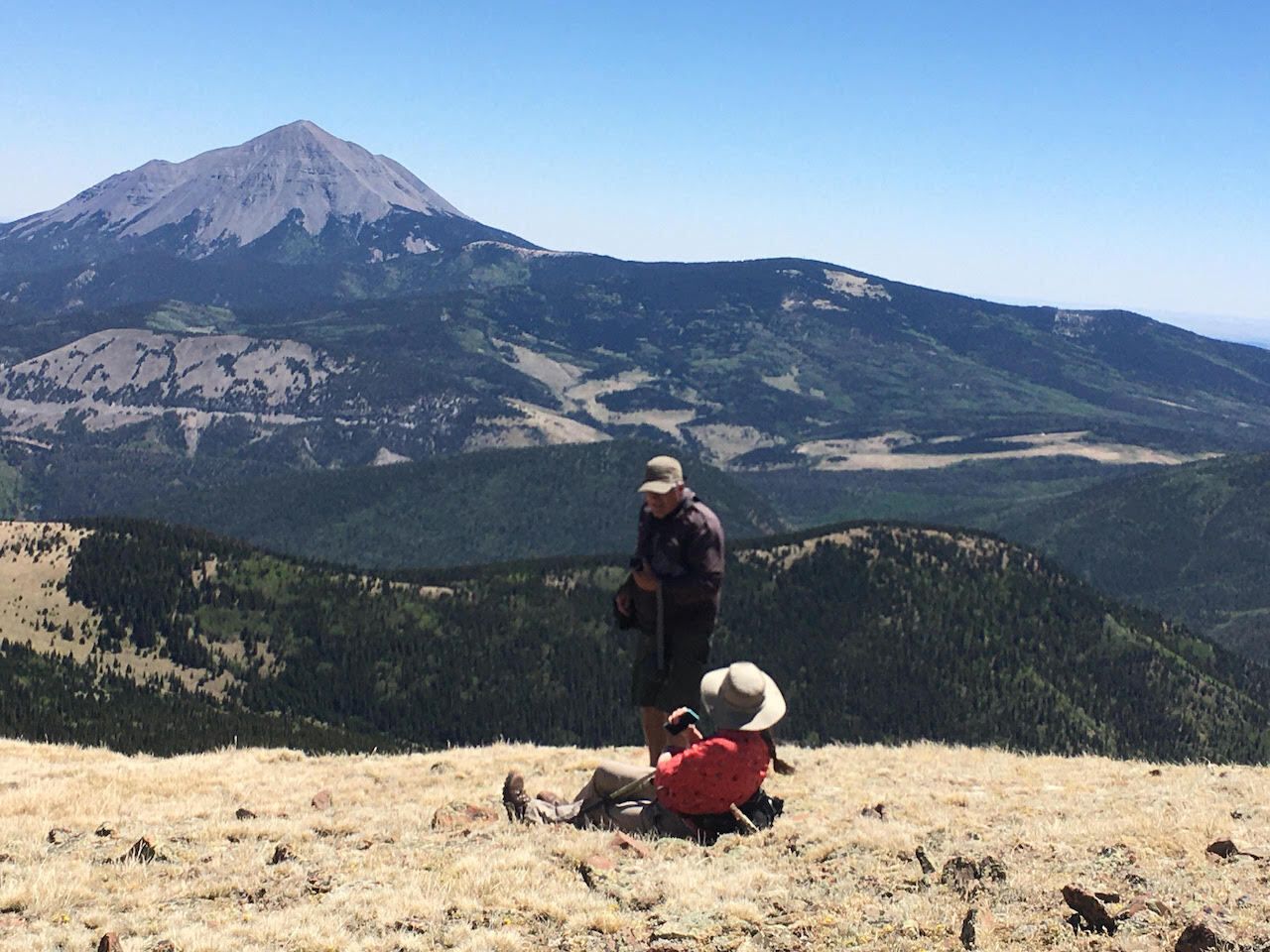 The SHOL and the wild offerings along its route are the primary draw. When the route was added to the National Scenic Byway system in February 2021, it noted its “outstanding scenic and historic attributes.” Drive the scenic byway to stop to sightsee frequently.

Download the TravelStorysGPS app and follow along on a two-hour guided tour of the SHOL. This is the best option to hit the highlights, including ghost towns, old mines, and scenic viewpoints, and get the story behind them. Be sure to stop and catch a view of the Great Dikes, the largest of the region’s granite dikes that look like long, jagged walls of rock stretching across the landscape.

These also include the former Cuchara ski area, which ceased operations in 2001 and has been continually plagued by budget woes and mismanagement. There’s hope among locals that the ski area will reopen at least in part in the next season or two, as much of the area’s intermediate terrain is owned by Huerfano County. A local volunteer group works with the county-run Cuchara Mountain Park to create a small operation serving lessons and a safe space for families to learn and progress on skis or a snowboard. The day lodge at the base is currently open for events and on select weekends.

The areas within the park’s boundaries and the surrounding mountains are regularly explored on day trips by backcountry skiers and snowboarders. The best way to find a good route is to post up at the Mission Deli Mesa Bar in La Veta and chat with locals. If you visit in winter and plan to backcountry ski, check avalanche conditions via the Colorado Avalanche Information Center and be sure you have the proper equipment and a partner to tour with. 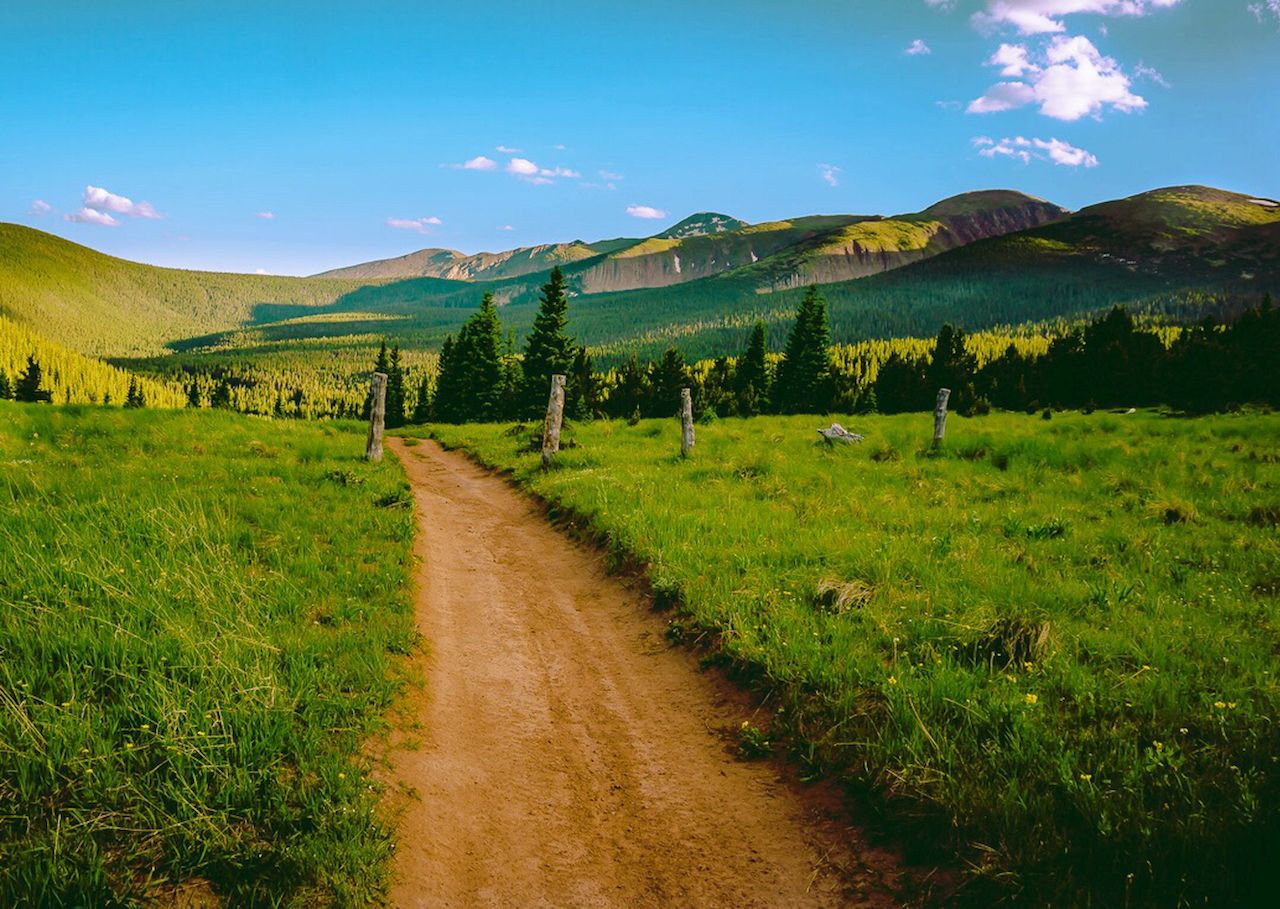 Hiking is extensive in Spanish Peaks Country, as it is across the entire Rocky Mountain west region. The two-mile Hogback Loop in Lathrop State Park is a great introductory hike to the area to get accustomed to elevation gain. After that, you can turn your attention to the Spanish Peaks Wilderness.

At Cuchara, the Spring Creek Trailhead is a great family hike that lets you boot in as far as you’d like to go, even if that’s only partly up the .6-mile lower trail. Connections can be made to the Baker Creek Trail, Dodgeton Creek Trail, and Indian Creek Trail for longer hikes. The 4.8-mile Coal Creek Trail and its adjacent 2.8-mile Wildcat Trail, both easily accessed off Highway 12 near Cuchara Pass, make ideal day hikes into the San Isabel National Forest with moderate elevation gain and plenty of incredible viewpoints. 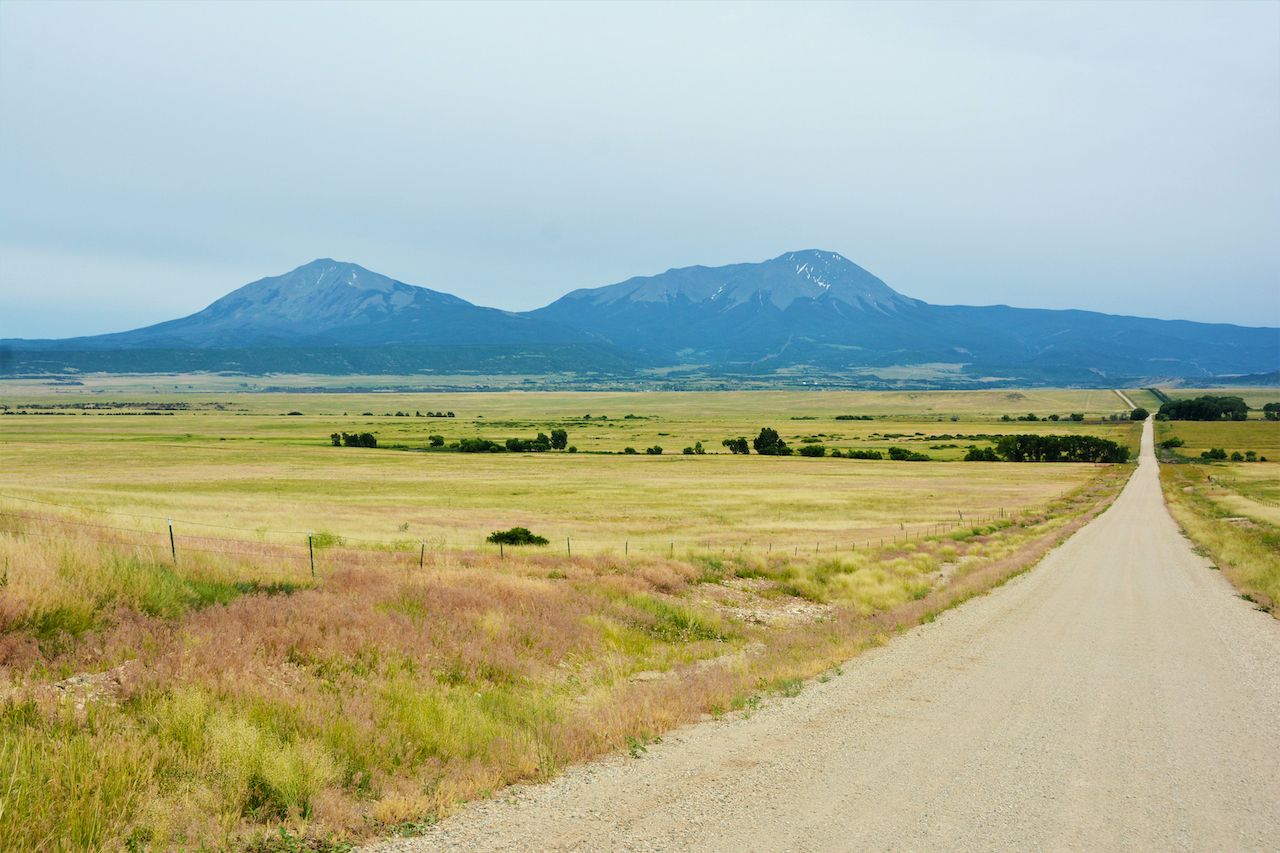 In December 2019, an environmental study was released by the Colorado Department of Transportation and the South Central Council of Governments to analyze the impact and costs of developing a pedestrian and bicycle trail along the entire route, covering a total of 82 miles, and improving current infrastructure. If and when this route comes to fruition, it would include signage to guide cyclists along the route along with new pullouts and EV charging stations, visitors centers, and bike repair stations along the way.

Cyclists currently must ride along Highway 12, a beautiful but challenging journey that makes for a more engaging experience than simply driving it. Multiple destination rides attract cyclists from around the country each year, including the Ride the Rockies and Stonewall Century Ride.

The county roads outside La Veta and Walsenburg also make for some of the best gravel biking in Colorado, right from town. A must-do ride for first-timers in the area is the Lover’s Leap route from La Veta. From Highway 12, turn east onto Cuchara Street and take a right on County Road 360. You’ll pass two reservoirs and hit Wayatola Valley.

From here, you can see what’s known as the Big Wall, the area’s largest volcanic dike. Continue on County Road 360 through what remains of a collection of old hippie communes from the 1960s and 70s. After seven miles and about 1,400 feet of elevation gain, you’ll reach Lover’s Leap, which offers an incredible view of the Spanish Peaks themselves and the surrounding wilderness area.

Another moderately challenging ride is to pedal west out of La Veta to Tracy Canyon. The roads pass the charred remains of the 2018 Spring Creek Fire, a grim reminder of the high country’s vulnerability to climate change and the elements, but also for frequent spotting of wild turkeys, deer, and elk en route. 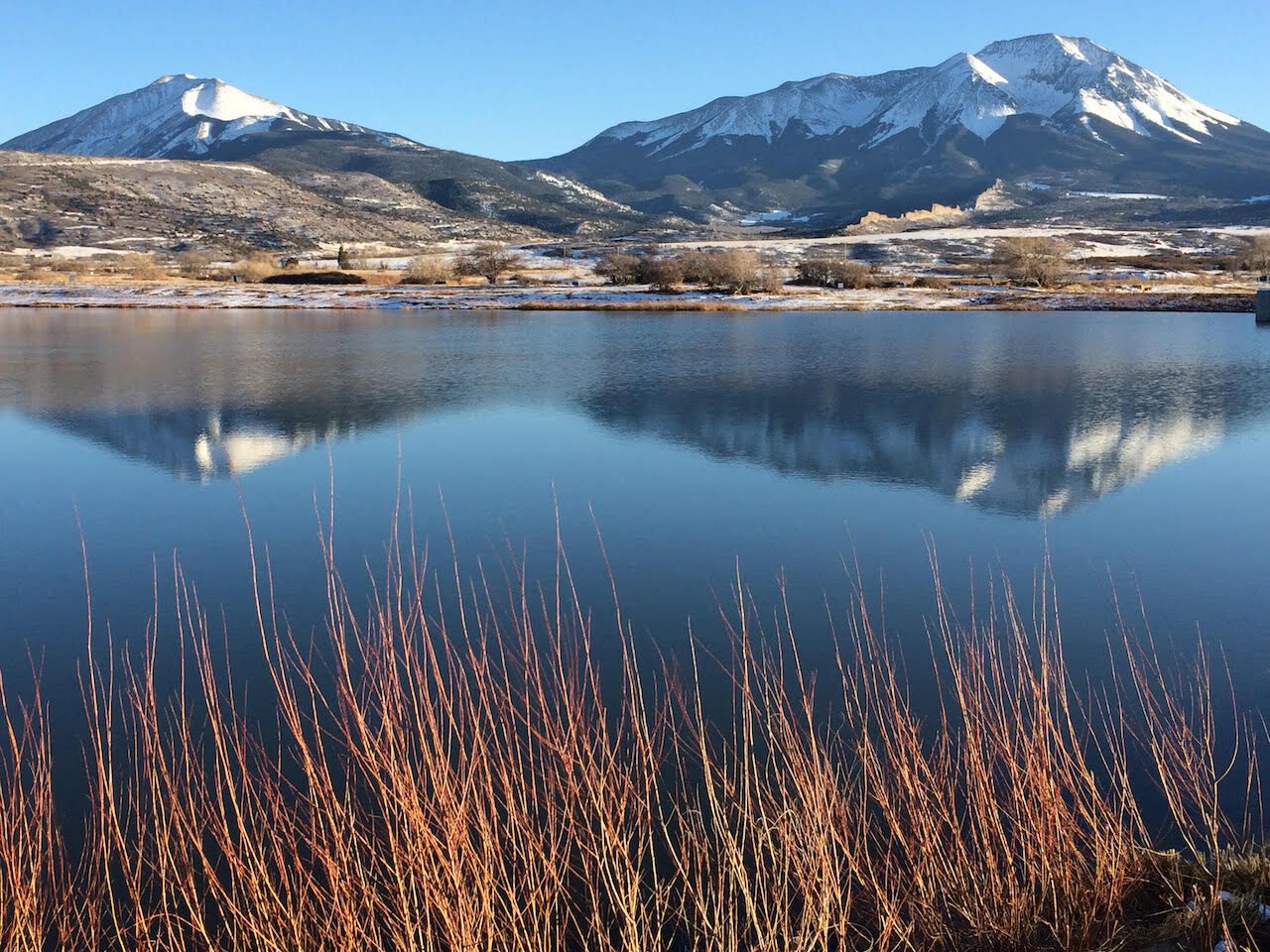 Both metaphorically and realistically, the Spring Creek Fire was a reminder to those who live here of how unique this region is and the need to protect it from overdevelopment and over-tourism. The Spanish Peaks tourism board and local businesses are committed to promoting responsible recreation outdoors and keeping their towns’ character intact.

“We have adopted the LNT (Leave No Trace) and Care for Colorado models to protect our open spaces and we will educate our visitors as part of our sustainable tourism goals,” Kennemer said.

How to get to Spanish Peaks Country, and where to stay when you arrive 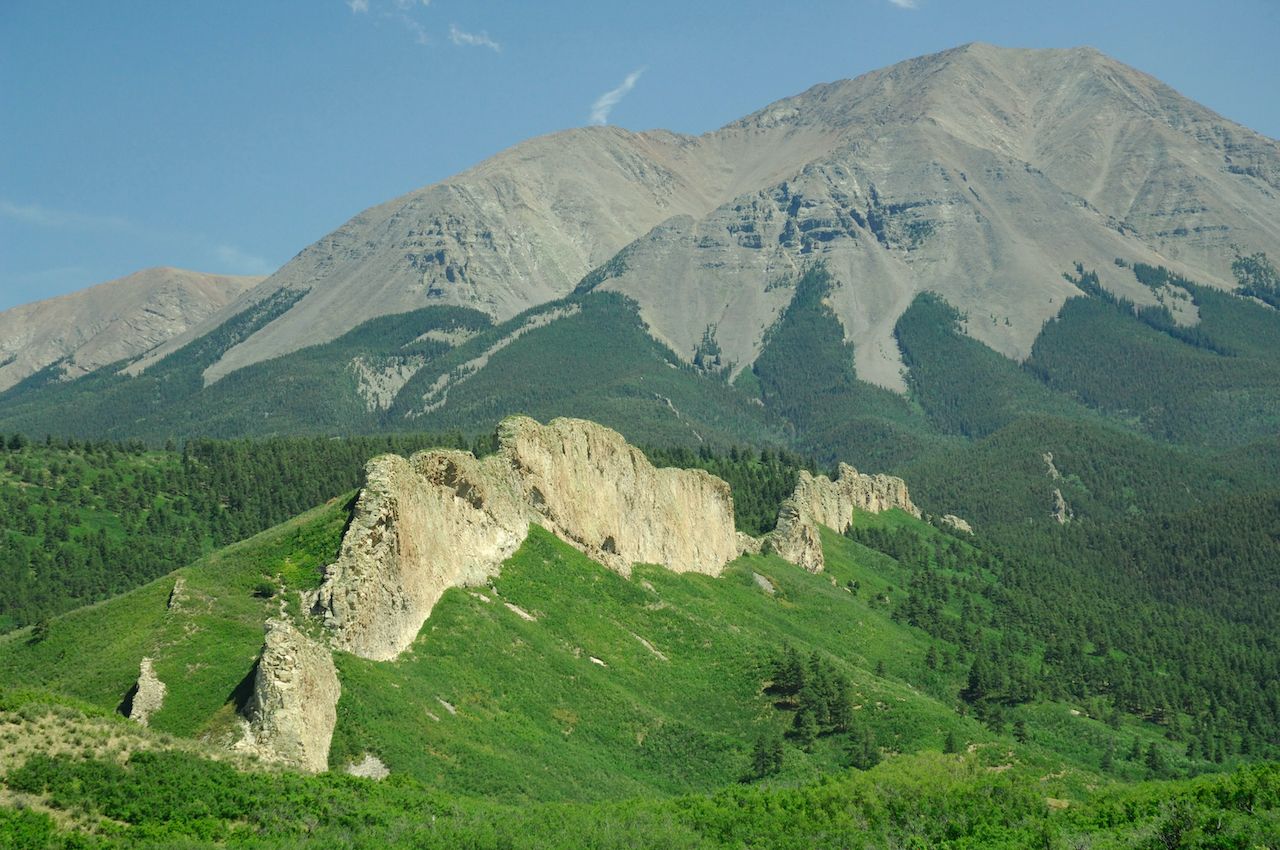 Interstate 25 and US Highway 160 are the main roads to reach Spanish Peaks Country by car. Amtrak’s Southwest Chief line services Trinidad, as does Greyhound from Denver or Colorado Springs, from $25. High-speed internet connections aren’t always guaranteed in the area, so if you need to work while here, head to My One Hour Office in Walsenburg, a quirky take on a modern coworking space crossed with a classic 1990s cyber-cafe. Rent a desk by the hour for $6, internet included, and take advantage of the conference room and printing services if necessary.

Resort-style hotels are in short supply in Spanish Peaks Country. La Veta has a few roadside motels, while Trinidad has the same. Walsenburg is home to the historic La Plaza Hotel and Restaurant and a few chain hotels near the interstate. If you’re here for adventure, your best bet is to do one of two things: Camp, or book the Spanish Peaks Guesthouse through Airbnb. The guesthouse, located just south of Walsenburg, puts you in the hills with easy access to some of the area’s best gravel riding. The views of the Spanish Peaks from the patio are themselves worth spending a night here.

If you choose to camp, the easiest option is to reserve a spot at one end of the SHOL at either Lathrop or Trinidad Lake State Park. Mid-route, opt for a spot at the Blue Lakes or Purgatoire Campgrounds. Remember that shopping amenities are limited here, so bring the gear and clothing you’ll need for your trip.