A kayaker rips through a stretch of whitewater, using a rapid to invert herself into a twist before realigning and paddling downstream. On the side of the river, a small group of onlookers cheers the move. Some are locals stopping for a mid-ride rest while pedaling their bicycles across Colorado’s Vail Valley. Others are visitors from Denver, witnessing freestyle kayaking for the first time.

This sounds like any summer Saturday in the popular resort towns of Vail or Breckenridge — but it’s actually the small town of Eagle, 30 miles west of Vail. There, Eagle River Park is a new whitewater park developed as a destination for river runners and spectators on a stretch of the Eagle River. Eagle, a town of 7,000 residents, has long been a bedroom community for retirees, resort workers, and others wanting to live in the mountains but not within the often over-fabricated — and very expensive — grasp of resort communities.

Mountain towns like Eagle become destinations of their own 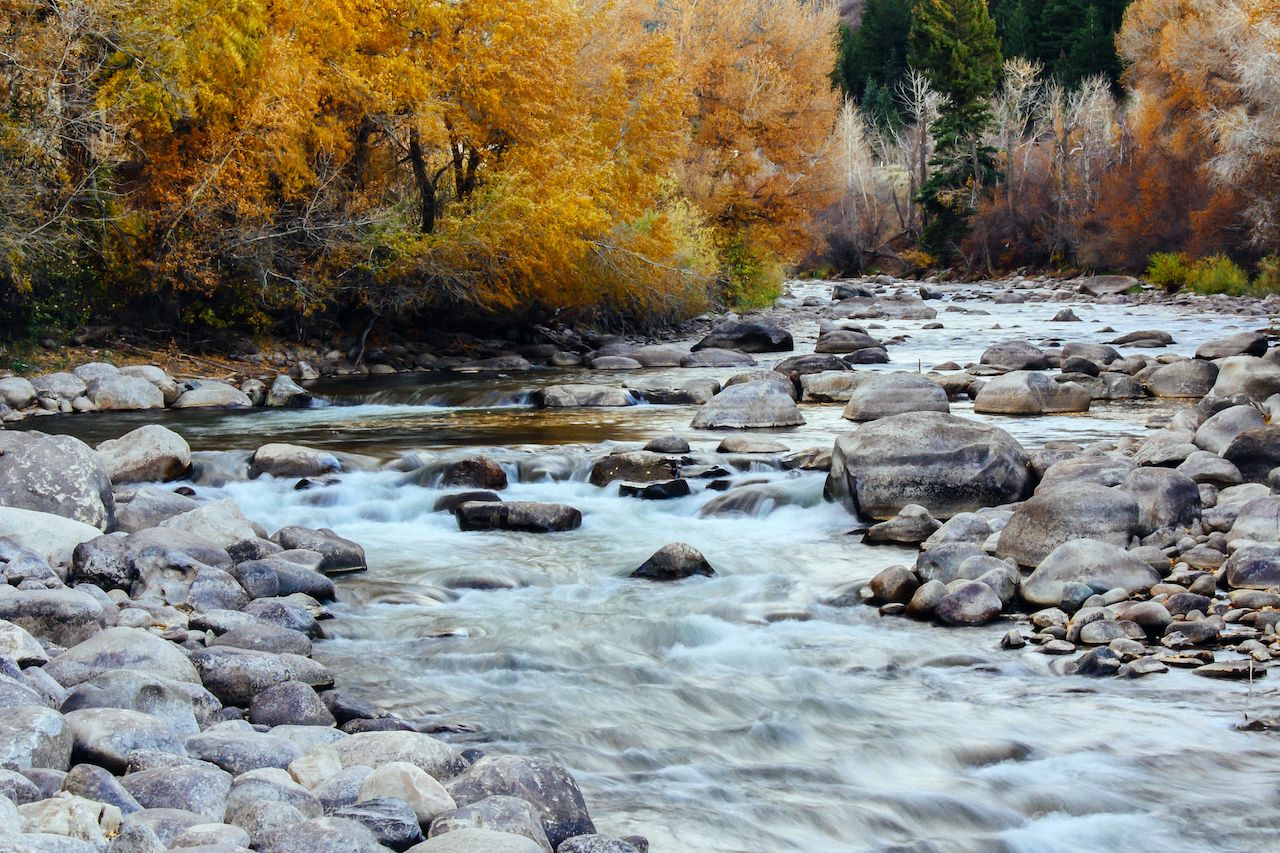 In recent years, mountain towns across Colorado’s I-70 corridor have seen major public and private investment in their recreation offerings and hospitality. The goal, ultimately, is to lure visitors from Denver and out of state who care more about seeing the mountains than being seen in them. Certainly, wealthy families seeking a chic mountain getaway will be better served in Aspen or Vail since the downtowns of Eagle, Avon, and Fruita don’t have Patagonia storefronts or restaurants run by celebrity chefs. But those places are where the locals live and, increasingly, where the diehard outdoor recreators go for destination trips.

The Eagle River Park is a competition-ready whitewater kayak course created by whitewater design firm S20 Design & Engineering. It features man-made rapids placed in strategic locations to create features for kayakers, stand-up paddleboards, tubers, and other water users. The park is built for both water users and the spectators who come to watch them, with seating and a fire pit area.

“What we’ve created here is something here for everybody that paddles, whether you’re a beginner at the downstream end or an expert who wants to try those upper features,” Scott Shipley, President of the S20 Design & Engineering, said about the development in a YouTube video.

The park is part of a larger trend, the newest highlight of Eagle’s easy access to outdoor recreation that includes hiking, backcountry skiing, camping, and more than 100 miles of mountain bike trails in the recently updated Hardscrabble Mountain trail system. All of this combines to give tourists to the Vail Valley an option for a quieter, more authentic mountain town experience than they’d find in the resorts of Vail proper. It also helps the town grow its own economy around outdoor recreation without full dependence on the larger resorts.

Avon is a ski town with local charm 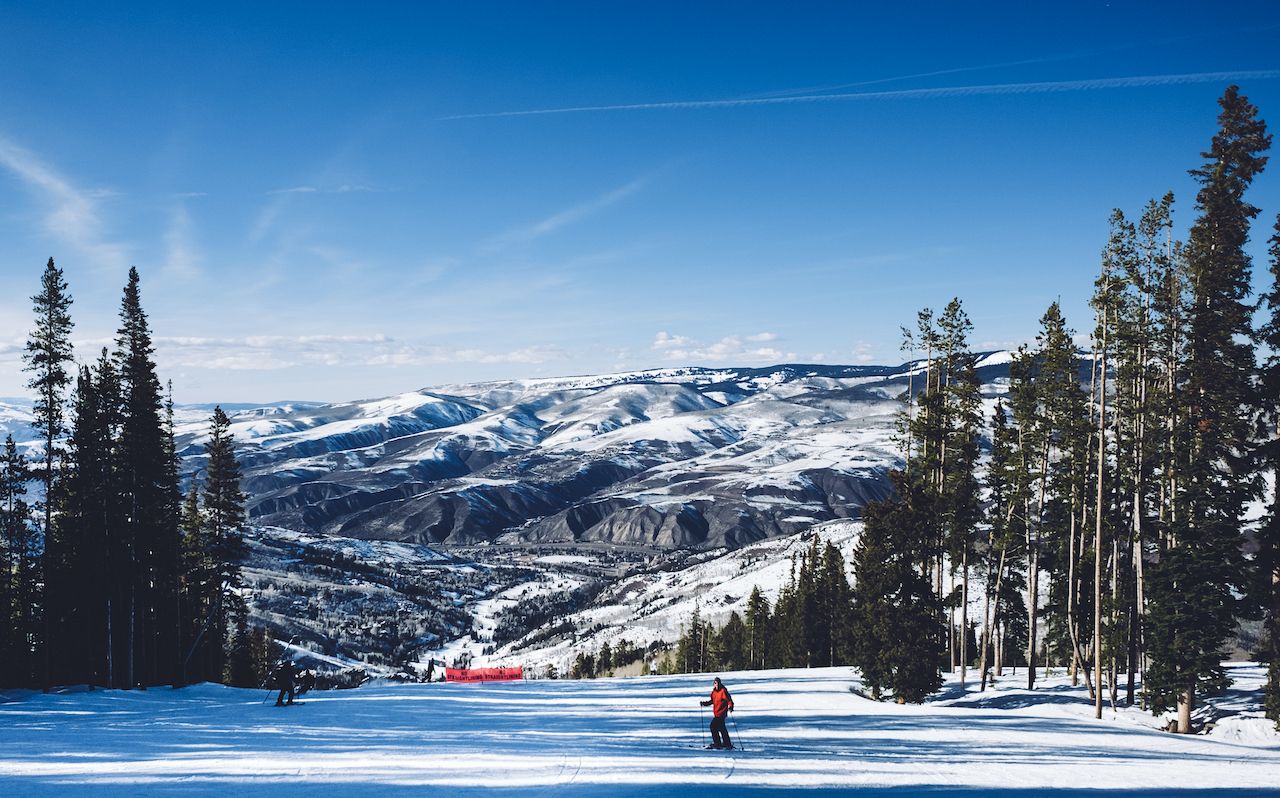 Closer to Vail even than Eagle, the mountain bike and hiking trails of the West Avon Preserve stretch above the town of Avon, providing bird’s eye views of the valley below and the ski trails of the luxurious Beaver Creek Mountain Resort further in the distance. Despite being in between two high-end resort towns, Avon retains a local charm — and is using it to bring in travelers who want the best outdoor experience. Cyclists clad in jerseys and spandex sit over pints of beer at Ein Prosit, a German-themed beer cafe in the heart of town.

Across the street is a new take on mountain lodging opened in the summer of 2020: the Cohabit Pod Hotel. “We offer guests a unique and affordable alternative to traditionally overpriced hotels,” the hotel says via its website. “We merge the relaxed, social elements of a hostel with the privacy of a boutique hotel.” 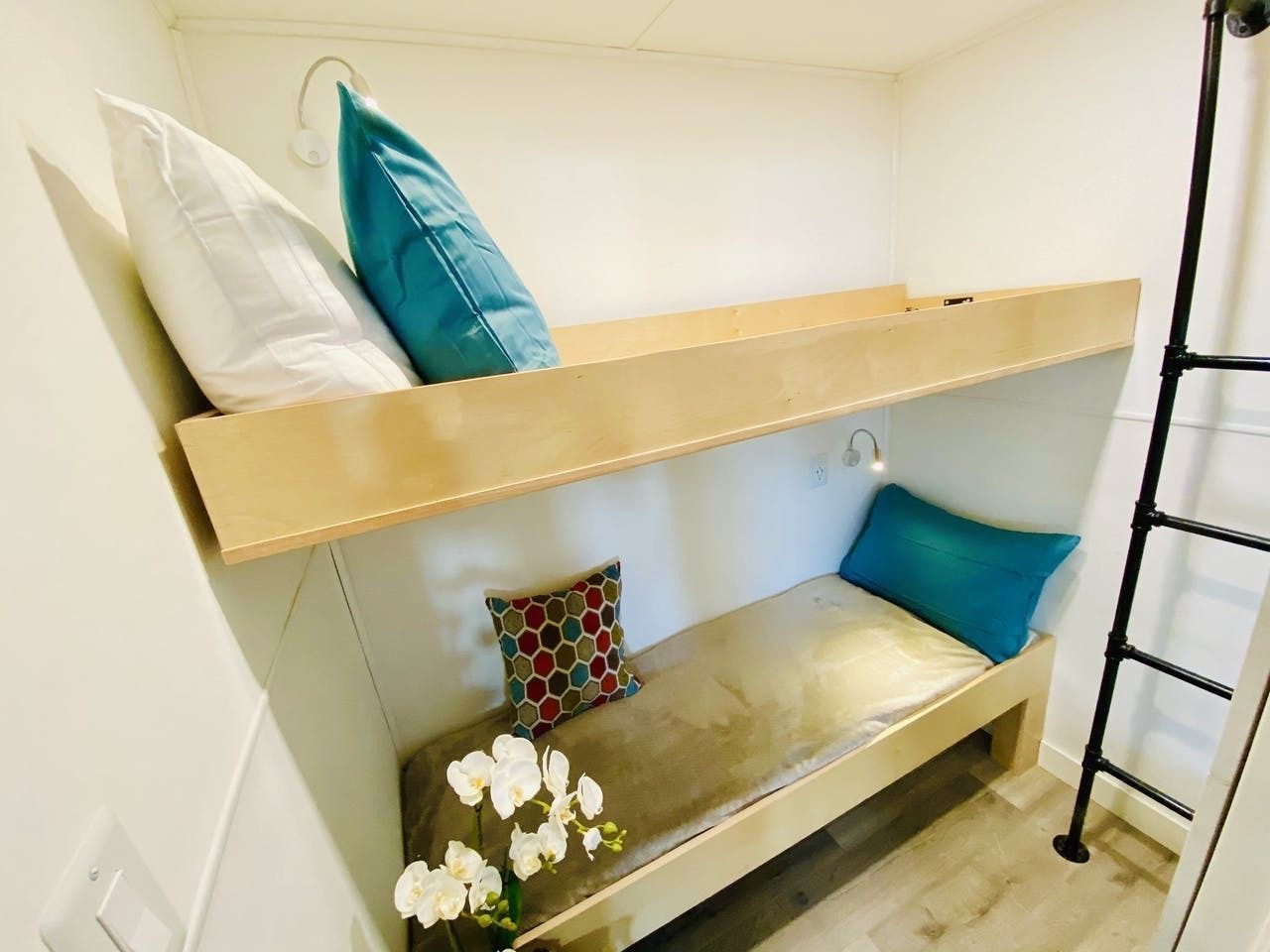 Cohabit is small and cozy by definition. Its rooms, called “pods,” are less than 50 square feet in size. Rather than a king-size bed, they feature a bunk set up with two single mattresses and nearly everything in the room lies within an arm’s reach. Rates around $135 per night in mid-winter are a fraction of what you’d find in a resort town, and though there’s no ski-in, ski-out access, you can hop on the free Vail Valley Eco Transit a short walk away; the bus drops off at multiple points within a moment’s walk of the resort’s chairlifts.

“Cohabit’s minimalist lodging is for the experiential traveler who values connection and community over pricey hotel amenities,” the company says. 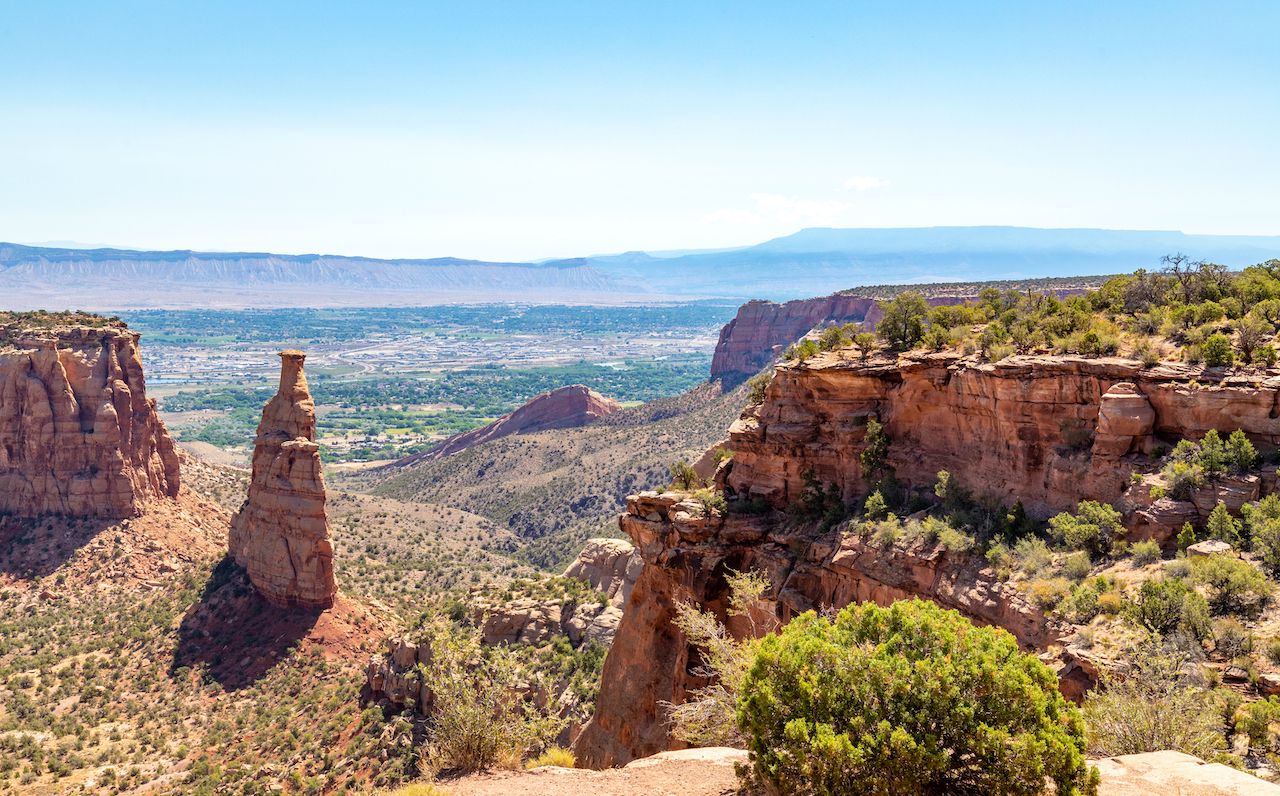 In addition to diverse recreation and lodging offerings, the diversity of Colorado’s natural landscape itself is helping small towns along I-70 bring see increased visitor numbers. For mountain bikers, nowhere in Colorado is on par with the high-desert town of Fruita. A further two hours west of Eagle and 90 miles east of Moab, Utah, the Slickrock mountain biking hotspot and national parks hub that draws more than three million tourists annually, Fruita had historically been an agricultural community.

In the 1990s, close work between the Bureau of Land Management, which manages most of the terrain open to mountain biking around the town, local riders, and city officials brought to life two biking trail systems that have slowly earned their place as a top destination among America’s dedicated mountain bikers. The 18 Road Trails wind through the North Fruita Desert just minutes from town, including the 28-mile Edge Loop, an EPIC Ride, as certified by the International Mountain Bicycling Association. The Kokopelli Loops circle the McInnis Canyon National Conservation Area, overlooking the Colorado River. This trail system is the starting point of the 150-mile Kokopelli Trail, which passes from Fruita to Moab.

“Fruita is rad because visitors feel like locals,” City Manager Mike Bennett told Matador via email. “The reason being — Fruita is not an overpriced, overcrowded destination. It is a community first, surrounded by world-class outdoor adventure and genuine, welcoming locals. There is so much surrounding terrain that guests of all skill levels have many options.”

Fruita is also the put-in point for rafting the Ruby Horsethief Canyon stretch of the Colorado River and offers in-town paddling on the river as well. Dispersed camping and reservable campgrounds surround the town, including within the Colorado National Monument, a popular tourist draw even before the recent mountain biking boom. For those not wishing to camp, Bennett says, “We have a variety of hotels and short-term rentals.” 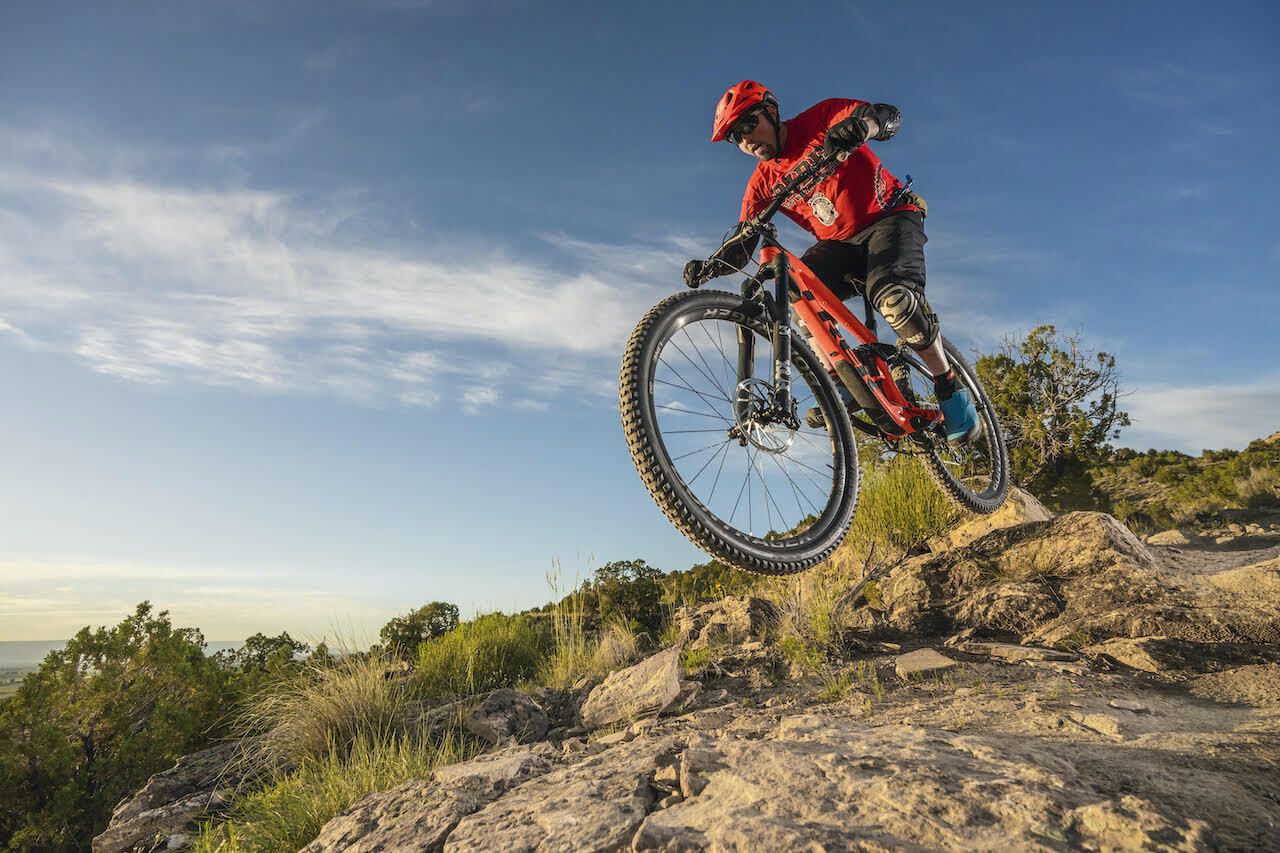 Two local businesses serve as hubs for the town’s mountain bike community for visitors and locals. The Hot Tomato is a pizzeria and taproom run by Jen Zeuner and Anne Keller, both diehard cyclists themselves. The joint was the subject of the documentary film Life of Pie, which chronicles the journey of Zeuner and Keller alongside the town’s growth as a mountain bike destination.

The second is Over The Edge Sports, a local bike shop that has advocated for, worked to develop, and promoted the area’s singletrack trails since it opened its first location here in 1996. There’s no better place to stop for local knowledge on either of the two prominent trail systems. “The Bookcliffs are our quintessential flow trails with ridgeline descents that you’ll tell stories about for years,” says Landon Monholland of Over The Edge Sports. “[The] Kokopelli Loops are technical and flowing singletrack on cliffs above the Colorado River.”

No matter which system you ride, the local trails are, “Some of the most scenic singletrack on the planet,” says Monholland. “Good trails create good stories, and Fruita and the Grand Valley’s trail systems each have a lot to tell.”

For these three towns — Eagle, Avon, and Fruita — and so many more across the Intermountain West, outdoor recreation is playing a key role in developing long-term economic stability. While Fruita’s visitor numbers are a fraction of nearby Moab, city data showed more than 375,000 visitors to the town in 2017. As Monhalland says, “Mountain biking saved [Fruita] from bankruptcy and put it on the international map. It’s a bucket list place with amazing riding, great food, and ‘locals’ who actually live here and don’t mind sharing what we have.”

These Denver Airport Bathrooms Have Massive Windows Pilots and Passengers Can See Into
I Stayed at Yelp’s #1 Hotel in the US. Here’s What It’s Really Like To Visit.
Relax and Rejuvenate at These 7 Alpine Colorado Hot Springs
13 of the Most Underrated UNESCO Sites You Need To Visit
7 Vintage Train Rides in the US That Will Take You Where No Cars Can Go