The first time I ate snails in Europe was not in France, where golfball-sized escargot are famously sauteed in garlic-parsley butter and served as an hors d’oeuvre year-round, but in Portugal, where snails closer in size to the head of a golf tee are stewed in garlic-oregano broth and served as a summertime snack called caracóis.

My introduction to caracóis was more like an initiation. It was a scorching August afternoon in Lisbon’s South Bay. I’d spent the day nursing Sagres beers on the Costa da Caparica with my friend Filipe, who was hosting me for the week, and his friends Sara and Beatrix, who insisted I try the dish before the week was up, the contents of which they also insisted remain a surprise.

On the drive back from the beach, we pulled over at a small grocery store to stock up on the necessary ingredients: another sixpack of Sagres, a sleeve of sliced white bread, and a plastic bag filled with what looked like seashells, half suspended in an amber liquid.

“Do you know what these are?” Sara asked me, smirking, as she emptied the plastic bag into a saucepan in Filipe’s kitchen. Upon closer inspection, I realized that the shells I’d imagined might have belonged to hermit crabs belonged to another creature altogether: tiny land snails.

They only took a few minutes to prepare. Sara brought the liquid to a simmer, Beatrix toasted a few slices of bread, and Filipe rooted around his drawers for a box of toothpicks, which I learned were used to pry the snails from their shells while the toast was there to sop up the broth.

This is a familiar ritual in greater Lisbon, Portugal’s south-central Alentejo region, and the Algarve region south of that. Between May and August, or any month not containing the letter “r” as the local saying goes, countless cafes and homestyle restaurants called tascas put out signs reading “Ha caracóis!” or “Temos caracóis!” to let passersby know they have snails on offer. 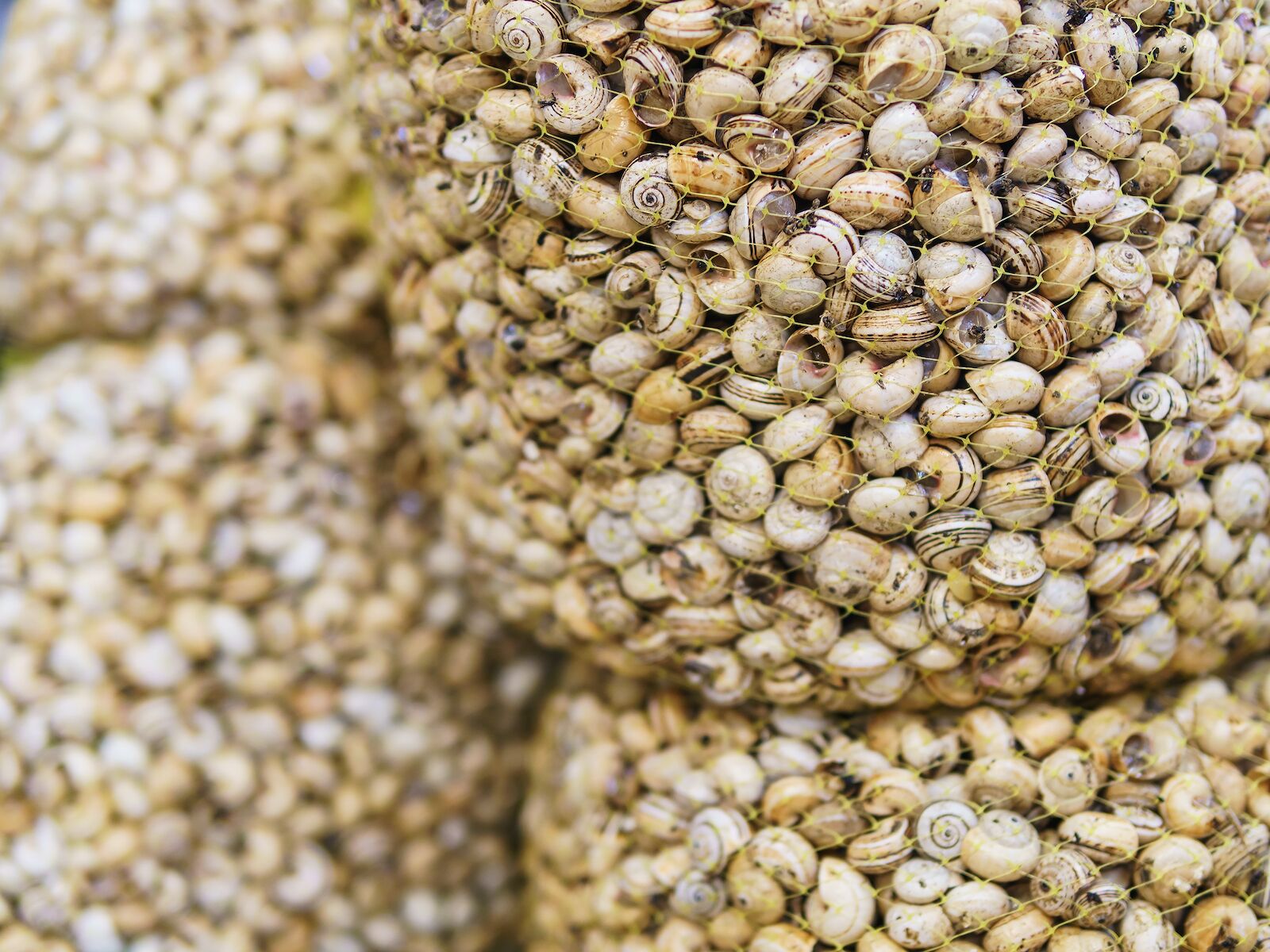 The snack is so popular that the Portuguese eat an estimated 4,000 tons of snails each year, which translates to millions of individual snails if only a fraction of the 30,000 tons that are consumed annually in France. (The prevalence of snails in Western European cuisines can be traced back to the Roman Empire when they were considered a delicacy.) Escargot-sized land snails called carcoletas are also eaten in mainland Portugal, as are sea snails called lapas in the Azores islands, but neither is gobbled up as ubiquitously or joyously as caracóis.

As delicious as the dish itself is the way caracóis is eaten in Portugal: one toothpickful at a time, in a motion that quickly becomes as compulsive as cracking open pistachios or slurping oysters from the half shelf. (With enough practice, caracóis can also be sucked out of their shells without the aid of a toothpick.) It’s an inherently social snack, one that’s typically served as a shared appetizer or a happy hour nibble alongside half-pints of beer known as imperials.

Even Filipe, who never developed a taste for caracóis, relished the activity of sharing a bowl with friends — and on that particular day exposing an American to a time-honored Portuguese tradition.

Of the many meals I’ve since had in Portugal, it’d be impossible to declare any one dish my favorite. But without a doubt, some of my most precious mealtime memories have begun by walking the streets of Lisbon on a summer day, scanning chalkboard menus in search of those two magic words: “Ha caracóis!”

Food + DrinkWhere To Try the Most Buttery, Succulent Escargots in France
Tagged
Food + Drink Portugal
What did you think of this story?
Meh
Good
Awesome

Portugal Is Reopening To Tourists From These Countries, Without a Two-Week Quarantine

Everything You Need To Know About Visiting Portugal This Summer