Over the past few years, Lisbon has taken center stage in the European travel scene. Portugal’s up-all-night capital has caught the eye of every type of traveler under the sun, whether they’re on party patrol, in search of amazing food, or eager to dig into Portuguese art and culture. Everyone gathers en masse on the banks of the Tagus, but shockingly few visitors actually think to cross the river, missing out on the many charms of the South Bay.

Smaller and more suburban than Lisbon, the South Bay lacks eclectic speakeasies and concept boutiques, but it shares much of what makes the capital city so compelling. It’s laid-back and beautiful, filled with good people, great food, and more than a few sights. Here’s why you can’t leave Lisbon without dedicating a day to the South Bay.

The ferry from Cais do Sodré to Cacilhas only takes 10 minutes. 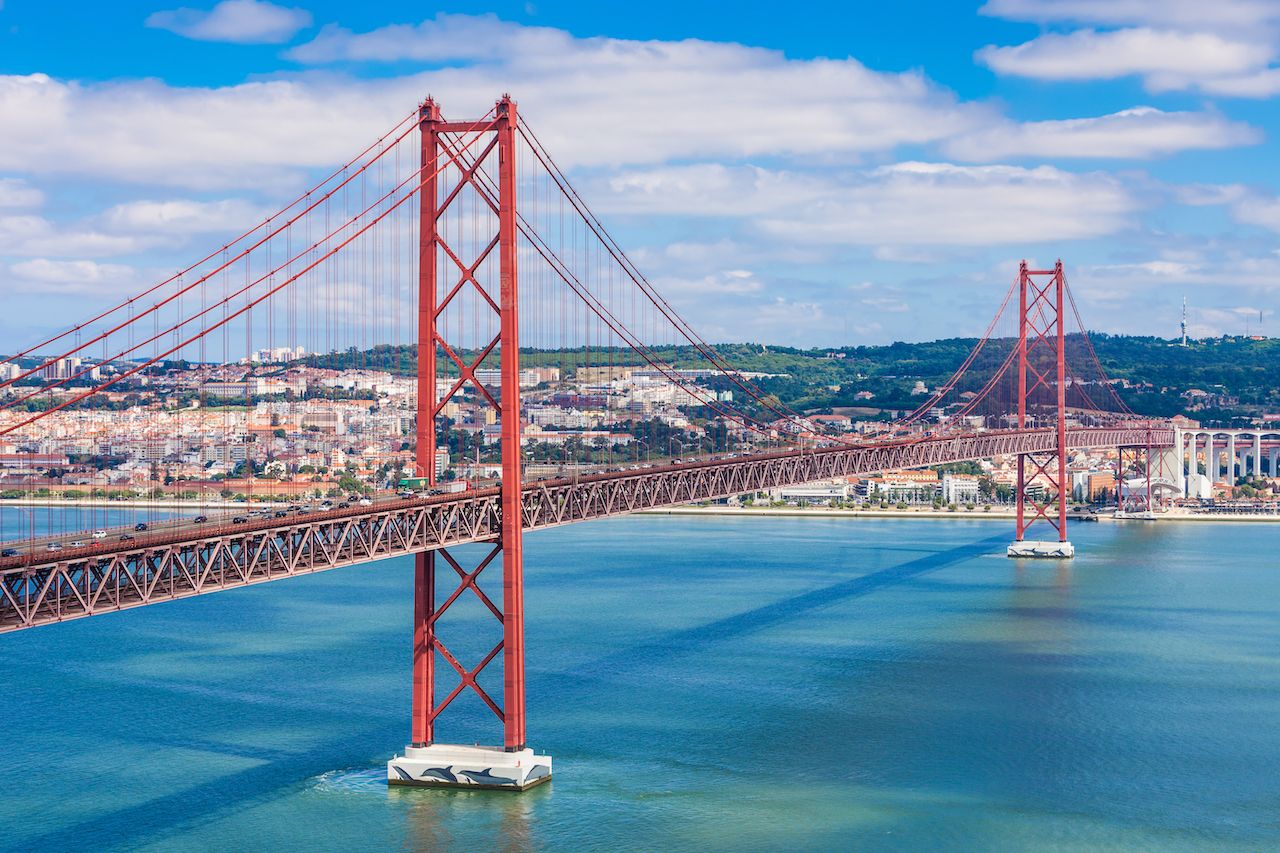 Convenience is a major selling point for prospective day trippers. All it takes to get to the South Bay is a 10-minute ferry ride that doubles as a photo op for the Ponte 25 de Abril, the Golden Gate lookalike that connects Lisbon to the municipality of Almada, and the giant Cristo Rei statue overlooking the water.

Depart from the Cais do Sodré ferry terminal behind the Green Line metro station of the same name. You might already be familiar with the neighborhood from an outing to the Time Out Market or the trendy bars lining Instagram-famous Pink Street. On the left bank, you’ll arrive in Cacilhas, with its several restaurants serving delicious but slightly overpriced seafood. Cacilhas is about as touristy as it gets here outside of the beach, so while it’s worth stopping for a beer along the water, you’ll get a better impression of the South Bay if you venture farther out. Bus and metro connections are available across the street from the Cacilhas terminal.

Pretty much everyone who lives there is actually Portuguese.

It’s not only trendy young travelers who’ve discovered Lisbon but also digital nomads and startup founders from across Europe and the world. The first wave of long-term renters was drawn to the city’s low cost of living, and the ensuing housing demand has hiked up rent prices beyond what many locals can afford. Between the sightseers and tech transplants, Lisbon feels a little less Portuguese than it did a decade ago.

While some long-stay visitors have started looking to the South Bay as an alternative to the increasingly expensive capital, pretty much everyone who lives there is actually from there. Enjoy mellowing into the easygoing local pace, and take the opportunity to brush up on your Portuguese. English may be pretty standard in Lisbon, but you won’t hear much on this side of the river.

There are great beaches — and beach clubs — along the Costa da Caparica. 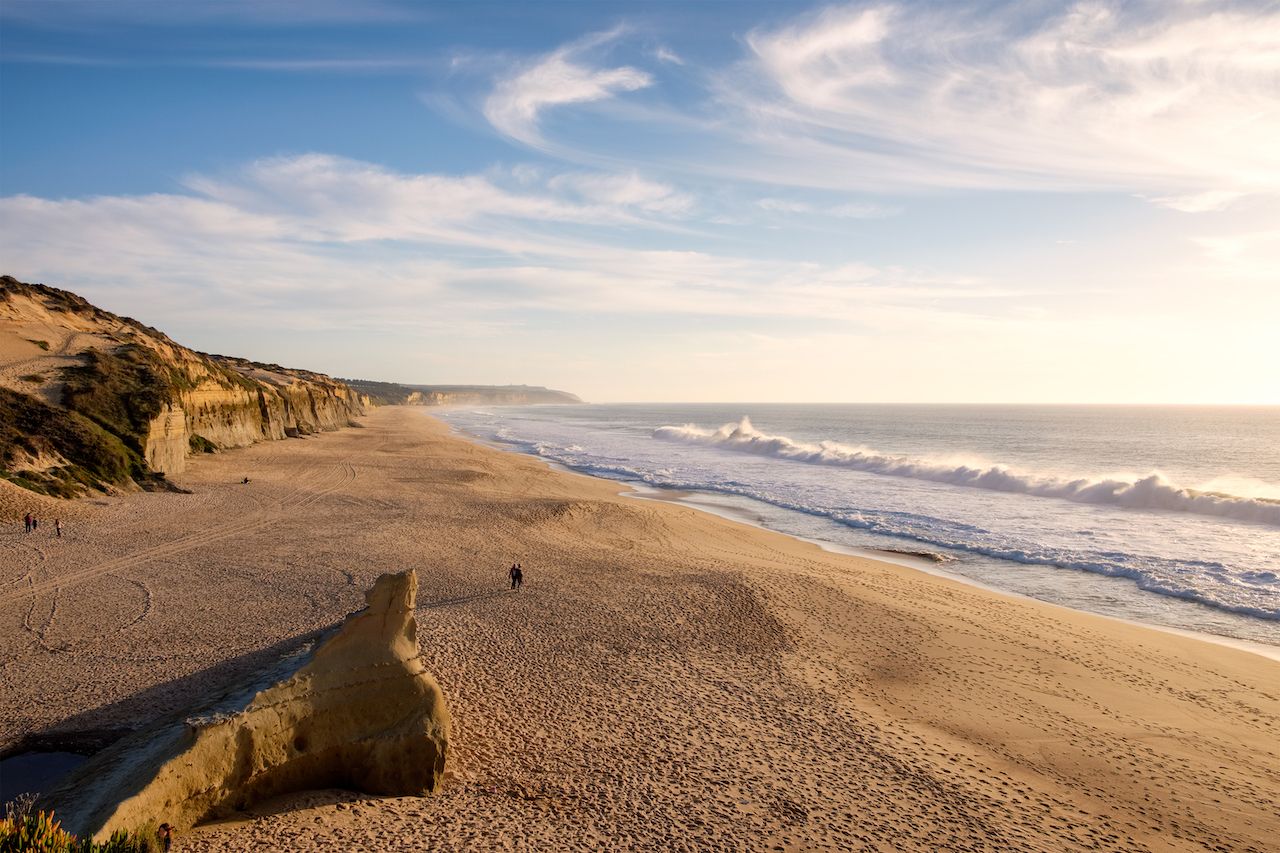 Some of the best and easiest to reach are located along the Costa da Caparica, where you’ll find every Lisboêta and their brother when it’s hot out but shockingly few tourists. The beach here is as popular with sunbathers as it is surfers, and although the main area is pretty built up, you can find secluded spots if you’re willing to walk. The upside to all that development: There’s no shortage of restaurants, bars, cafes, clubs, and other amenities near the beach, even hotels should you decide to stay a little longer. 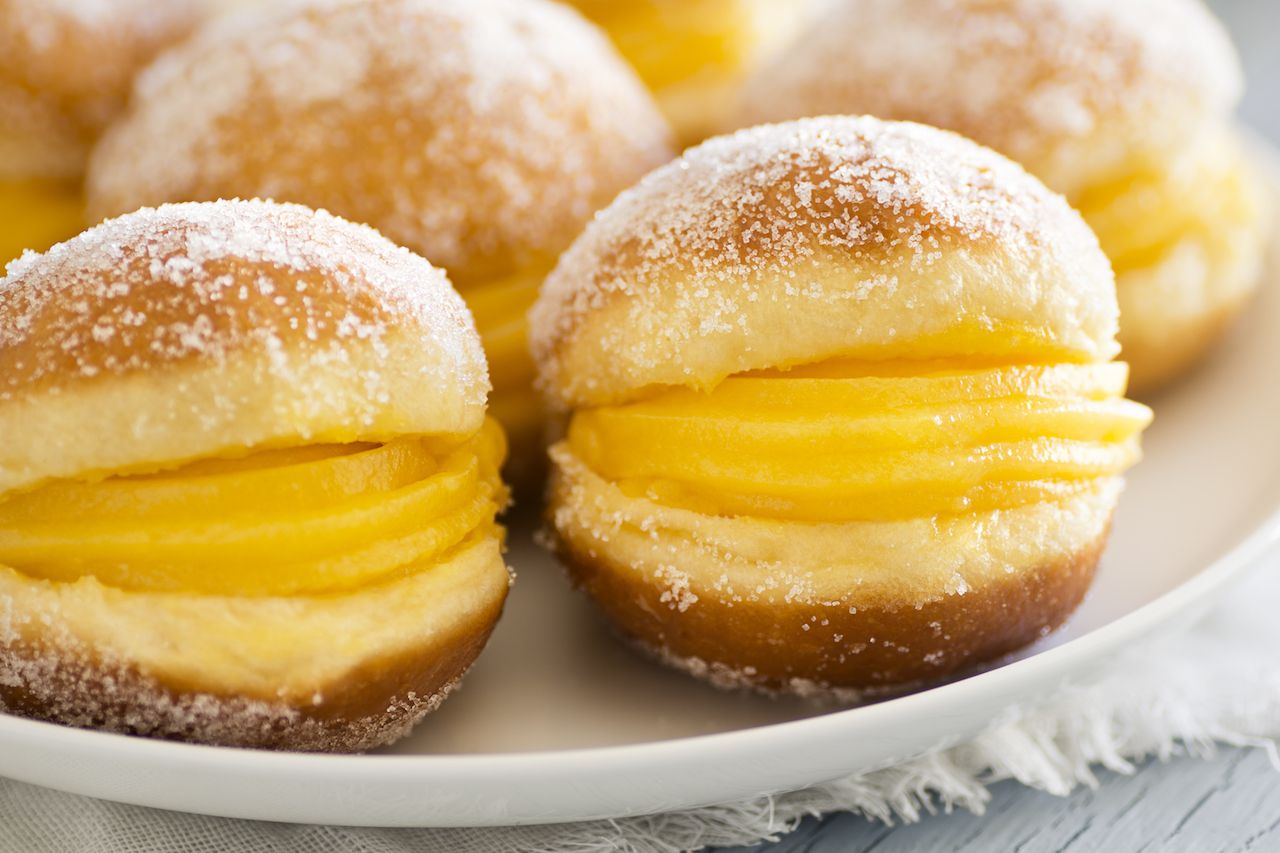 You can get tasty seafood right by the water in the South Bay, be it a few minute’s walk from the ferry or farther out in Sesimbra, a fishing village turned weekend haunt for Lisbon locals. But it’s not all seafood around here. Featured just as heavily on menus are gooey, salty Azeitão cheeses and cured meats; thin steaks topped with fried eggs and served with rice; and assorted petiscos, similar to Spanish tapas.

During summer — or any month that doesn’t end in “R” as they say in the South Bay — we recommend stopping by a beach club or seaside cafe for caracóis, small snails served in a savory broth with toast for dipping. If sweets are more your thing, load up on amazing pastries.

You can leave the city behind at Arrábida Nature Park. 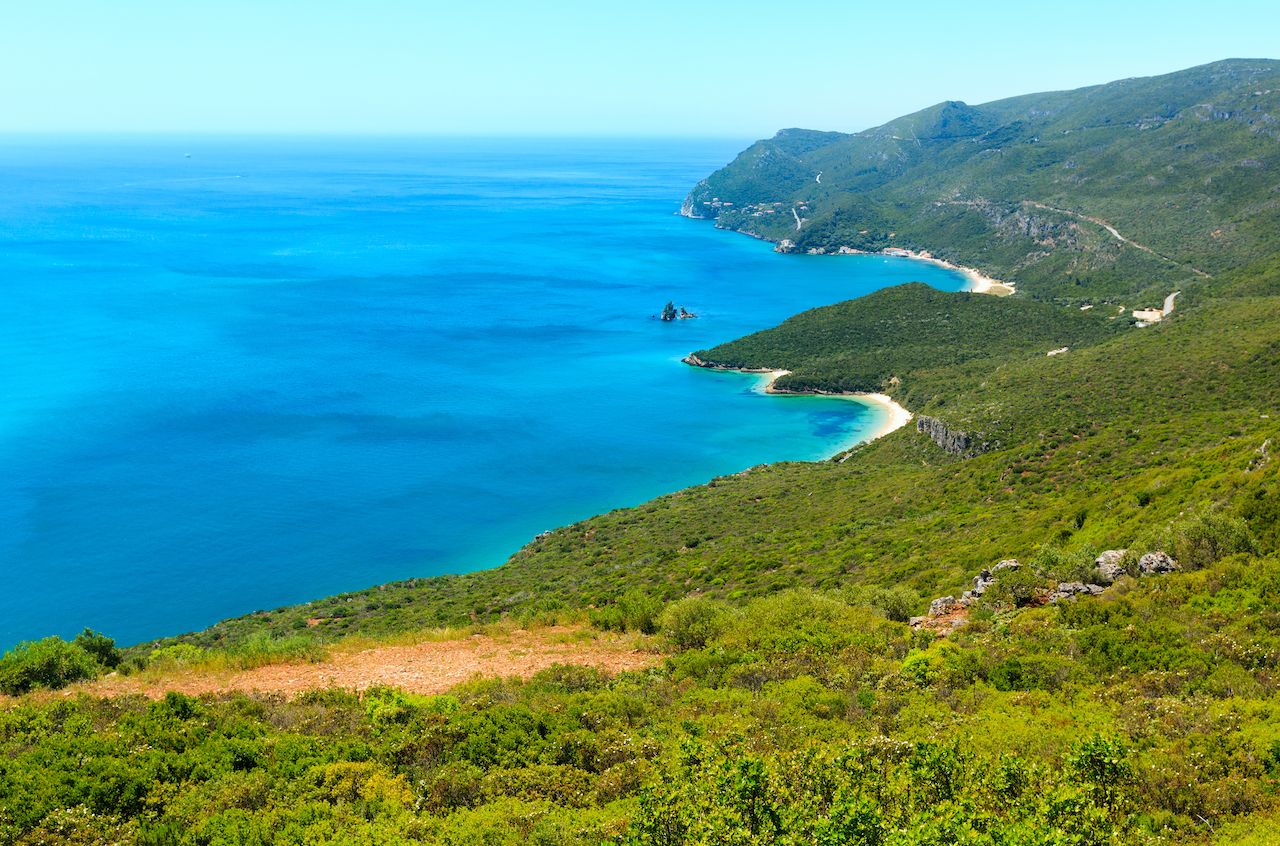 Outside the South Bay municipalities of Almada, Barreiro, and Seixal is one of the most picturesque nature retreats in Portugal, Arrábida Nature Park. Getting there can be a pain as there’s no public transport within the park. It is possible to catch a bus, train, or combination of the two to Sesimbra or Setúbal on either side of the park, but you’re better off renting or hiring a car for the day.

The drive is an experience in and of itself, a vision of green hills and limestone cliffs sloping toward perfect, sheltered bays. Beachgoers flock to Figueirinha Beach, as well as the beach in Portinho da Arrábida, a former fishing village. Farther up in the mountains, visitors can hike or cycle around the Serra da Arrábida, taking in the views from a higher vantage point. Whether you explore by car, bike, or on foot, keep an eye out for the 16th-century convent set amid the hills.

Or check out the lighthouse and Santuário de Nossa Senhora do Cabo at Cabo Espichel. 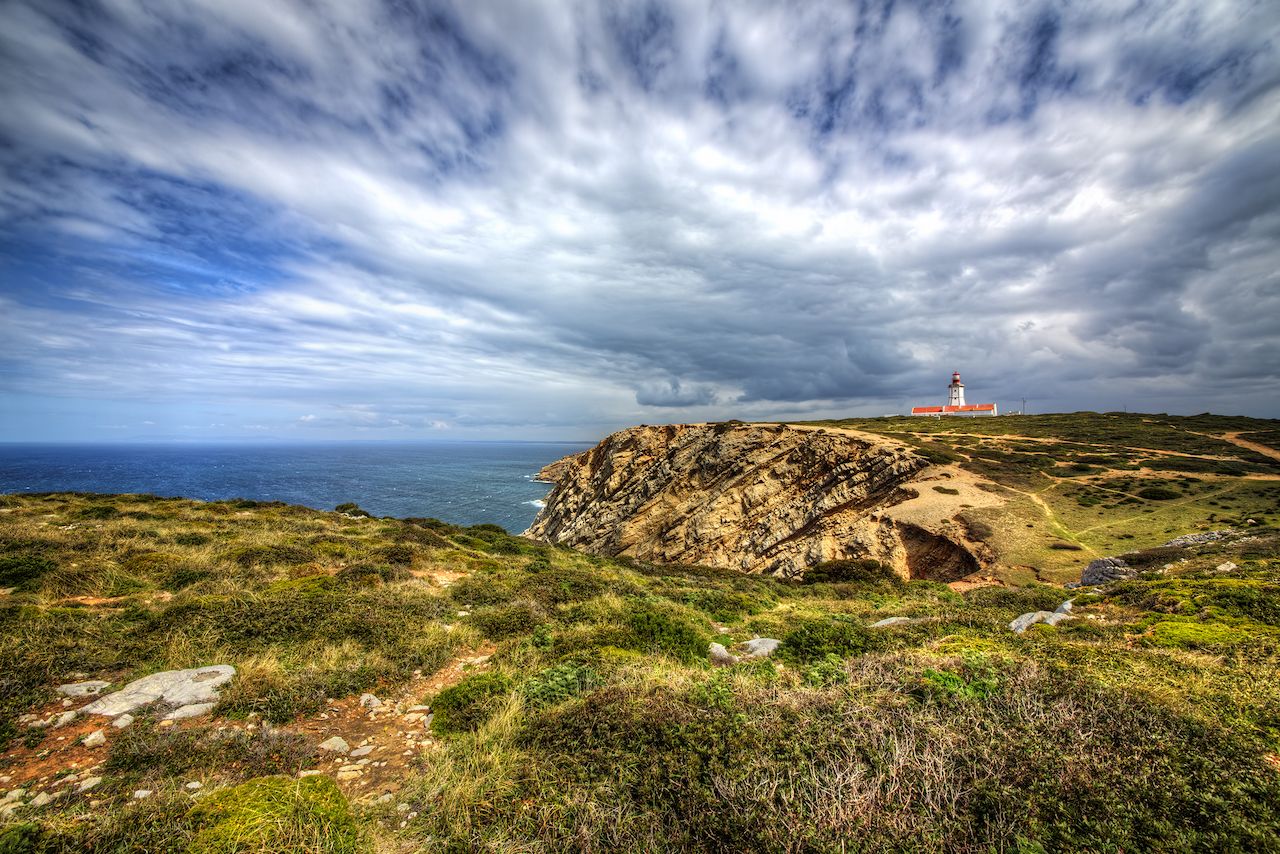 Cabo Espichel sits on the southwestern tip of the Setúbal Peninsula about 15 minutes by car from Arrábida Nature Park. The scenery is reason enough to visit, but you can also add a cultural stop to your itinerary with a visit to the cape’s 18th-century church, pilgrim’s accommodation, and lighthouse, all perched on cliffs above the Atlantic. There’s a small cafe near the church where you can stop for a drink or snack, but the better option is to top off your tour with lunch and a swim in Sesimbra.

And see dinosaur footprints on the way back. 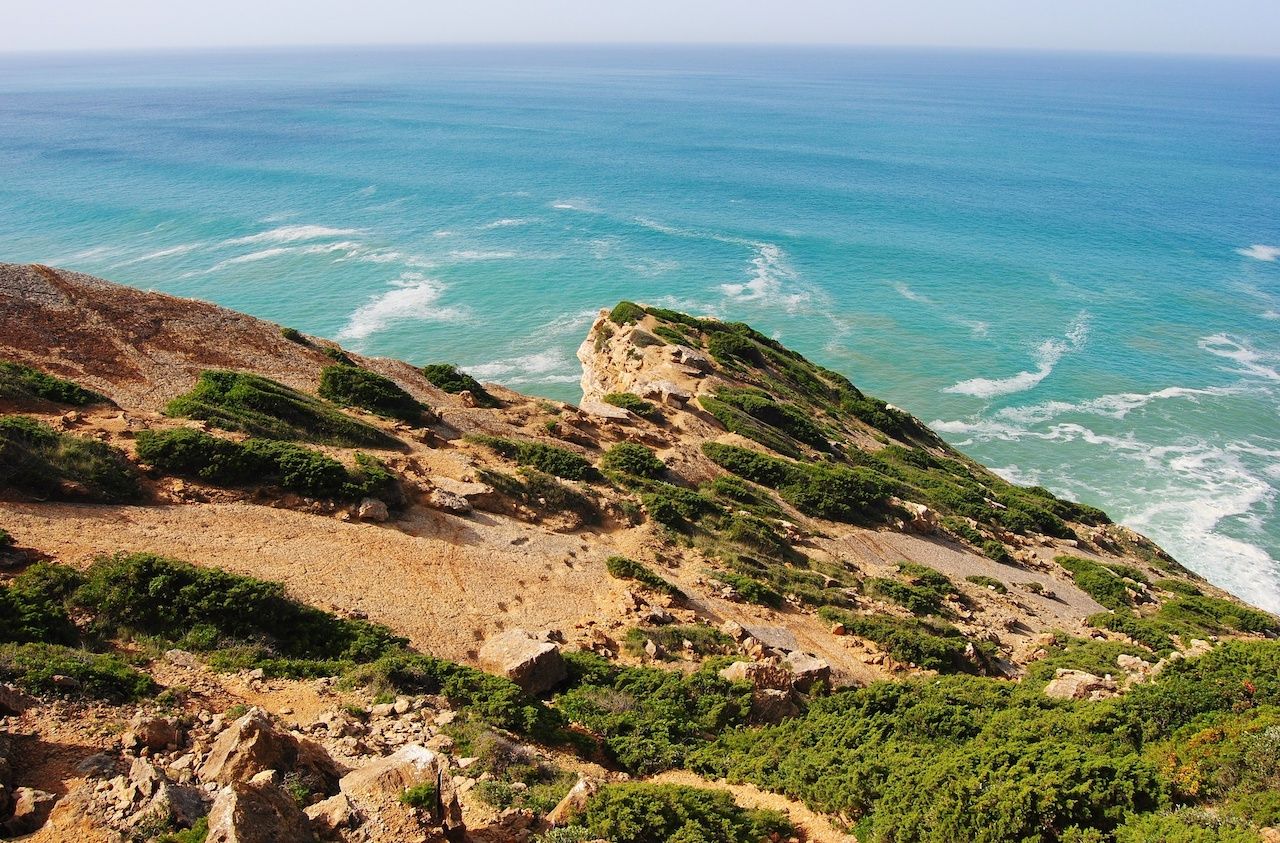 You can actually spot dinosaur footprints in the cliffs around Cabo Espichel. It isn’t the most groundbreaking paleontological discovery of all time, but it’s a fun bonus if you’re touring the area. It just goes to show that there really is something for everyone in the South Bay and the beautiful landscapes beyond — even dinosaur tracks.

Coffee + TeaIn the Azores Islands, You Can Drink Tea Straight From a Volcano
Tagged
Trip Planning Portugal
What did you think of this story?
Meh
Good
Awesome