2020 has made a lot of outdoor gear scarce, and a 25-year-old invention designed for surfers and snowboarders is no exception. Unfortunately, this year’s shortage of carveboards wasn’t entirely for the reasons you’d expect.

Ask a surfer or a snowboarder for a pet peeve of their sport, and the response is likely to include at least one of the following: flat days where the conditions aren’t rideable or overcrowding at their favorite spots.

This was the inspiration behind a new type of land board. In 1996, Brad Gerlach and his father Joe, two longtime California surfers, were tired of not being able to practice their passions on down days and developed an idea to fill the void. Their creative new take on the skateboard more closely emulated the feeling of turning on a surfboard or snowboard, allowing boardriders to practice their turns even when wave or snow conditions didn’t allow.

Their invention led to the evolution of a new take on the increasingly popular sport of skateboarding — dubbed carveboarding and headlined by the company Carveboard USA, founded by Brad Gerlach and fellow California rider David Colley.

Feeling stoked on the street

“You’re like Bambi,” says Ryan Franz, who has been with the Carveboard brand since 1999 and on a board for even longer, describing the feeling of making turns on one of its boards. “You’re walking away and your legs are completely jello, and everyone’s got a smile on their face from ear to ear, you know?”

It was this feeling of stoke that hooked riders on the boards during the skateboarding boom of the late ‘90s and early 2000s. Pro riders like Tony Hawk, Shaun White, and Kelly Slater became household names in this era, and interest in board sports was through the roof. Careveboard developed a way to bring the three most popular boardsports — skateboarding, snowboarding, and surfing — together into one. The kicker was that Carveboard’s product gave its customers the ability to shred every day of the year.

“There is nothing on the street that so closely emulates the feeling and ‘stoke’ of surfing or snowboarding,” founders Brad Gerlach and David Colley say on the company’s website. “There are so many down days when you just can’t get a surf or snowboard session and you’re just itching to get in some turns. With a little imagination and one of our boards, there is always a couple feet of fresh powder or [six to eight] foot and glassy sets coming in right outside your door.” 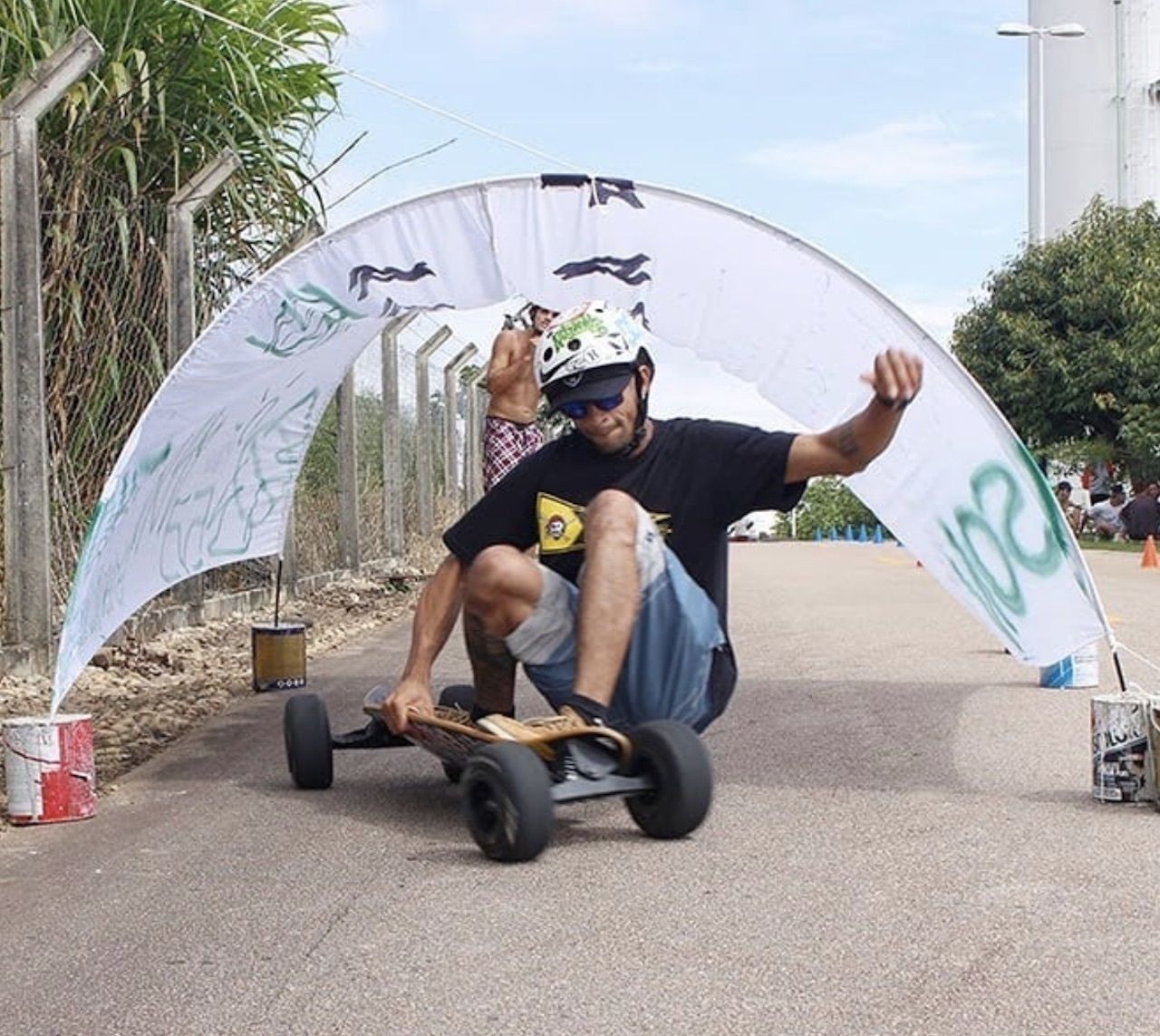 Carveboarding became part of the skateboarding lexicon for nearly a quarter-century, and the company’s products became established staples at skate shops not just across the country but also in some other places around the world. Carveboarding has a huge following, particularly among surf-crazy Brazilians.

Then 2020 happened. This year, interest in carveboarding and other longboarding offshoots exploded among athletes unable to practice their favorite sport, as ski resorts turned off their chair lifts early and many beaches were closed off for a time; searches for the sport of carveboarding and buying Carveboards have exploded in the last few months on Google.

But in early fall, the sport’s pioneer Joe Gerlach suffered a stroke and was forced to step away from the company he’d helped found. As a result, Carveboards are now in tight supply — many online skate shops including Warehouse Skateboards and Salty Peaks are out of stock.

Although tough to come by, Carveboards are available in limited quantity through the brand directly by emailing them. The company hopes to restock shelves soon, though you’ll have to shell out a few bucks in order to give one of these boards a whirl. Carveboard offers multiple models of its patented design, with its traditional carveboard running $365 to $385 and its entry-level “Surfstik” running $215 to $235.

With the setback and the pandemic, the Carveboard brand is “regrouping” and developing its path for going forward, beginning with a fresh stock of boards, says Franz. He adds that Joe’s son Brad and his daughter Corinne are both engaged in the effort. 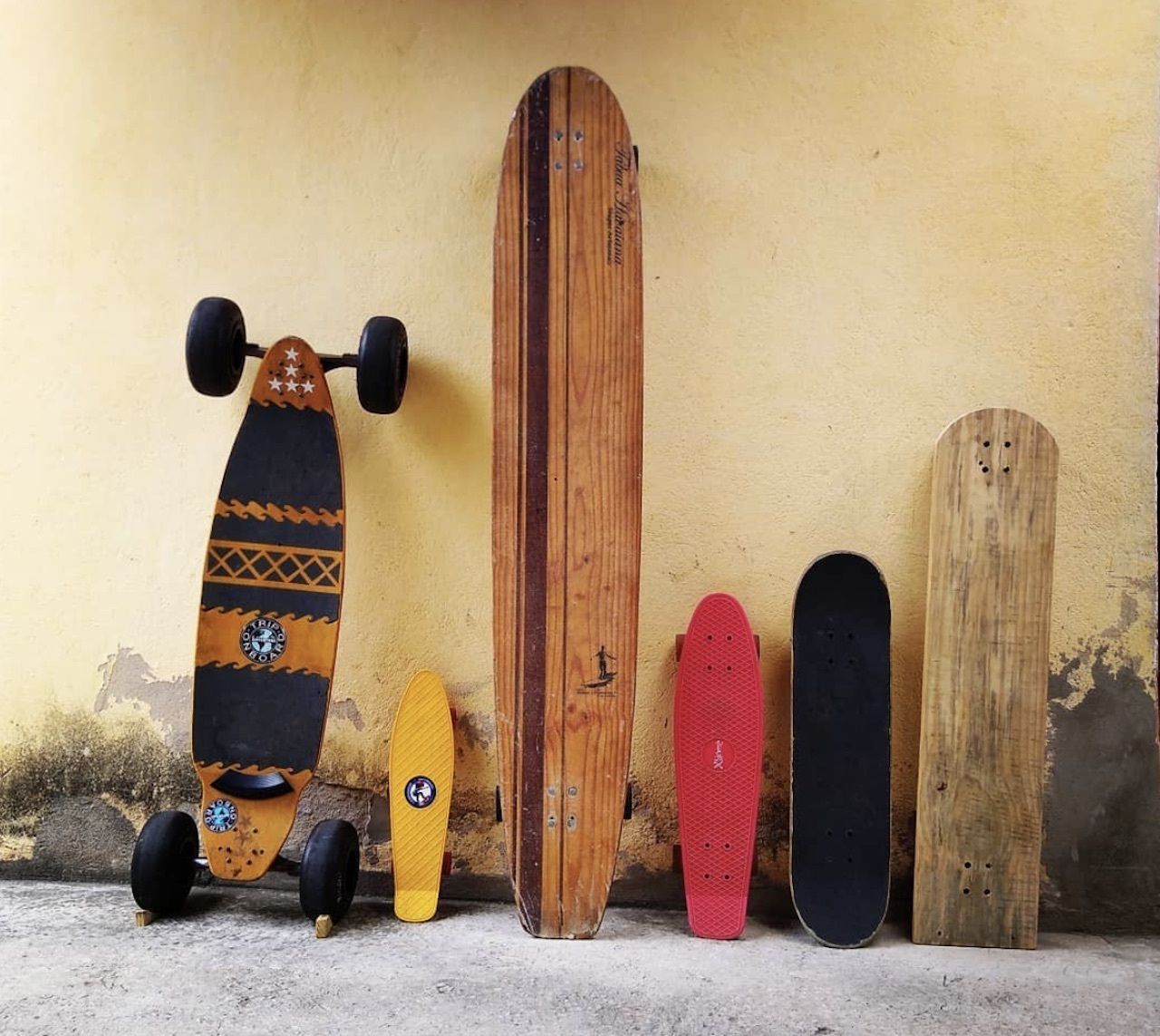 Though the sport most closely resembles longboarding — that is, using a specific “longboard” skateboard — the ability to “carve” takes the equipment and its riders to the next level. One of the tougher aspects to master on a longboard is the powerslide, the quick push of the board into a direction perpendicular to the pavement that allows the rider to slow down or stop.

Carveboarding solves this issue by incorporating the “carve” used by surfers and snowboarders to cut their way through a wave or slope. Unlike the trucks — the metal t-shaped underside pieces that connect the skateboard deck to its bearings and wheels — on a traditional longboard, which are fixed, those on a carveboard actually rotate on a joint connected to the top.

In addition, Carveboards have large wheels placed outside of the skateboard deck, rather than underneath it. The truck rotation and this design provide much greater maneuverability — allowing the rider to lean into the “carves” of each turn in a manner more similar to surfing or snowboarding than to traditional skateboarding.

“The cool thing is that if you are serious about whatever board sport you’re in, it allows you to work on technique and style,” Franz says. “So not only are you getting your workout in, but if you’re a moderate to experienced boardrider you’re working on the things you want to work on. It’s mind and body.”

Looking at a Carveboard, its evolution from skateboarding seems natural. Gerlach and his father increased the point-to-point turning radius of traditional longboard trucks to 45 degrees. The wide turning radius and a board length of at least 34 inches allow the trucks to operate independently of each other in a manner similar to a 4-wheel-drive automobile. This flexibility allows the rider to more closely emulate the carve of surfing and snowboarding.

While Joe Gerlach’s kids are planning a fresh stock of Carveboards, their plans don’t stop there.

“Joe’s ultimate dream is to create a park that’s designed for the board, and other boards that are spring-loaded and pivoting-truck,” Franz says. “Kind of like a pump park. It’s going to take a team of some engineers and architects to create a calculated ‘snake run.’”

To help get the project off the ground, Franz says they hope to “create a prototype of some sort, whether that’s out of plexiglass in a parking lot or whatever, to get the concept to reality.”

Franz is optimistic, saying “People’s minds will be completely blown.”

The good news in the meantime is that Joe is recovering, and the team behind Carveboard is dedicated to carrying on the legacy he’s created.

I’m a Professional Road Tripper. Here’s What I Never Leave Home Without.
Hilton’s Vallarta Riviera Will Change Your Mind About Booking All-Inclusives
Touring Hawaii by Train Is an Unexpected and Fun Way To See the Rainbow State
These Stunning Cabins Are the Ultimate Zion National Park Basecamp
How To Make the Most of a Weekend Trip To the Catskills on a Budget

The 8 Best Neck Pillows for Falling Asleep on Any Trip, According To a Sleep Science Coach