If you ever played the video game Excitebike as a kid, picture a never-ending run through your favorite course. If that course were real, it might resemble a pump track, a type of action sports practice facility increasingly common in the United States and around the world. Sometimes called a skills course, the pump track evolved out of traditional BMX courses and made the concept accessible to other sports, including mountain biking and skateboarding.

In a BMX course, the rider begins on top of a “drop-in” — a hill or incline where they can gain initial speed — and proceeds across a set of obstacles toward a finish line. The pump track closed the course into a loop. Here we cover a variety of pump track styles and formats, providing a basic idea of what to expect at each and helping you identify a format that works for you.

What exactly is a pump track? 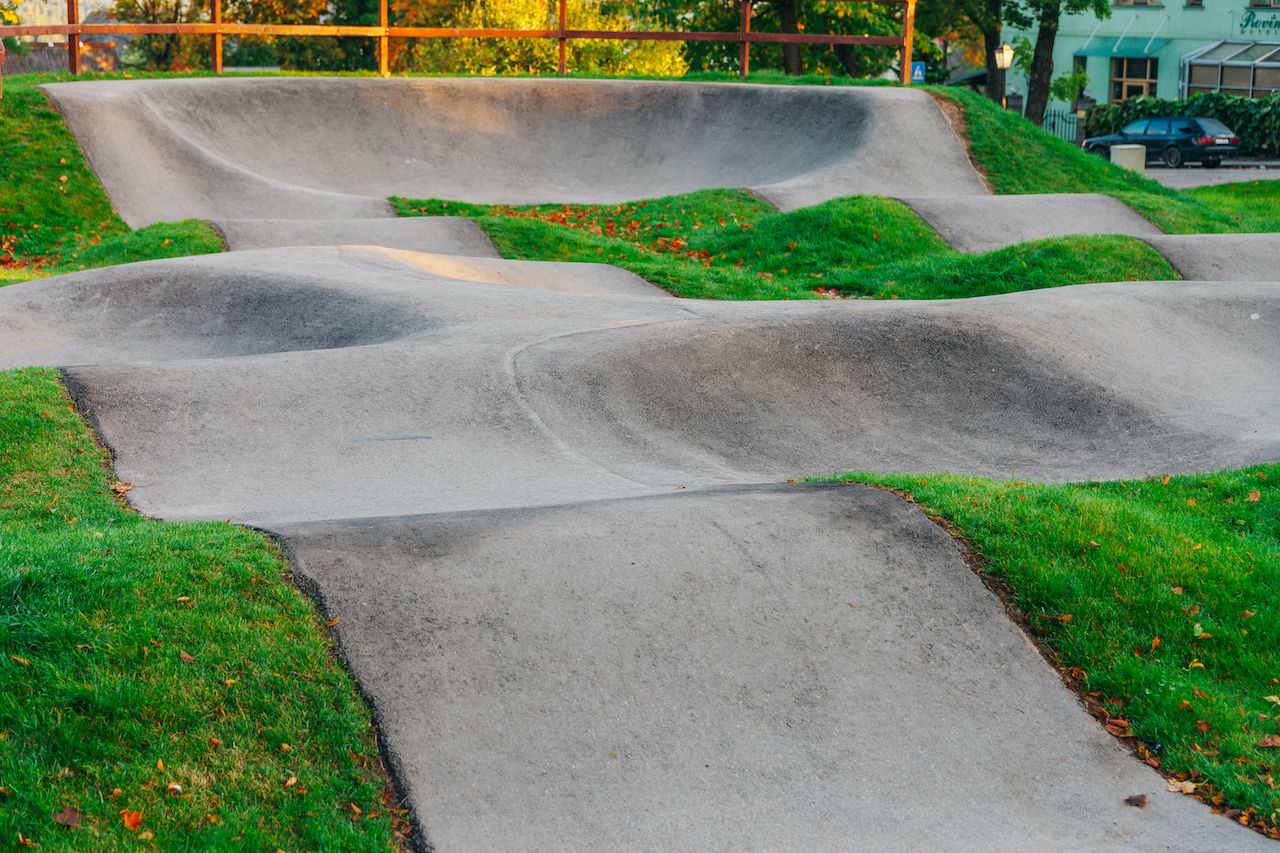 A pump track is a closed-loop practice track consisting of berms, jumps, rollers, and quarter-pipes, usually connected by banked turns. The rider “pumps” their way through in a continuous loop for as long as they wish, without having to pedal, skate, or throttle after dropping in. The “pump” itself signifies the rider’s ability to harness the momentum gained from crossing each of the park’s features, which is how they make it through without additional manual effort.

Tracks are generally designed for one specific action sport, often mountain biking, BMX, or skateboarding. Skateboard-specific pump tracks are typically made of concrete or asphalt and are found at, or in place of, traditional skateparks. Pump tracks built for bikers are typically made of dirt. You’ll often find them near mountain bike trailheads and at designated bike parks.

Riding a pump track is a great way to practice your sport because it allows you to slowly progress your movement and style as you gain confidence on the features. The tracks are designed for riders to flow through the course at a consistent speed, slowly getting faster as they get better.

How can I find a pump track near me? 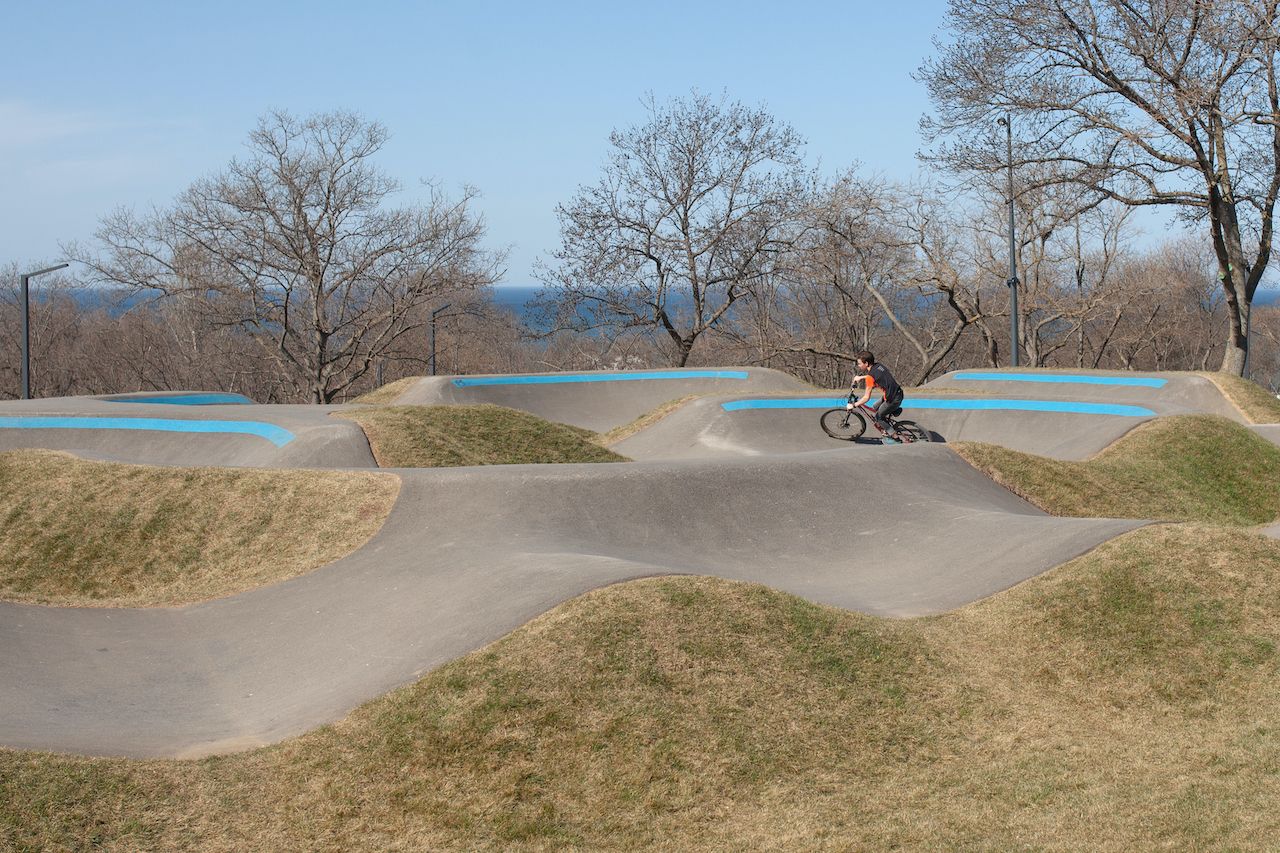 The top resource for finding pump tracks is Pumptrack. The website has a regularly updated map of courses all over the world, and since it’s far from complete, users can register tracks they find that aren’t listed to help the effort. World of BMX has a thorough index of tracks, but many are not registered or listed much beyond the websites of Parks and Recreation departments, if at all. Some diehard riders build them in their backyards, while others work with officials where they live to build tracks in open spaces or parks. These often become well-known in their community but can be hard to locate or even hear about. Therefore, a good way to find one near you, or near to where you are traveling, is to stop into a local bike shop or Google “pump track in (place name).”

The best pump tracks in the United States

Velosolutions Pump Track — multiple locations around the US 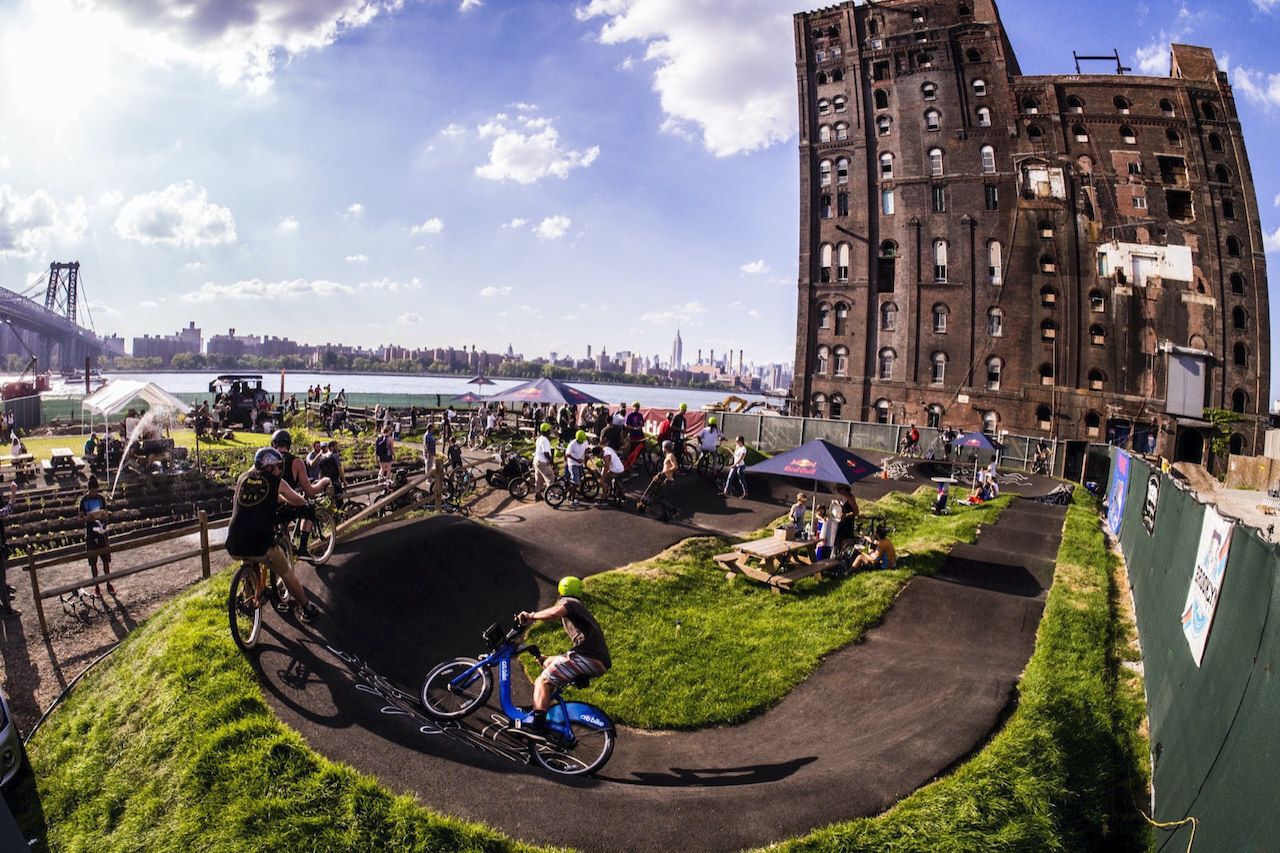 Velosolutions builds pump tracks around the world, including many in the US: New York City; Oklahoma City; Broomfield, Colorado; and Leavenworth, Washington, among others. The track in Williamsburg, Brooklyn, is a fine example of how versatile Vesolutions’ work is. Its tracks are made of asphalt, which makes them accessible to skateboarders and scooter riders, but you’ll also see plenty of bikers pushing their way through. The tracks feature multiple lines riders can choose from, including lines with smaller features for kids and beginners. Once on the advanced section, riders can choose to flow the entire course or ride around features they aren’t comfortable with yet. The only downside of the New York track is distraction — the track offers an incredible view of the Manhattan skyline across the water. 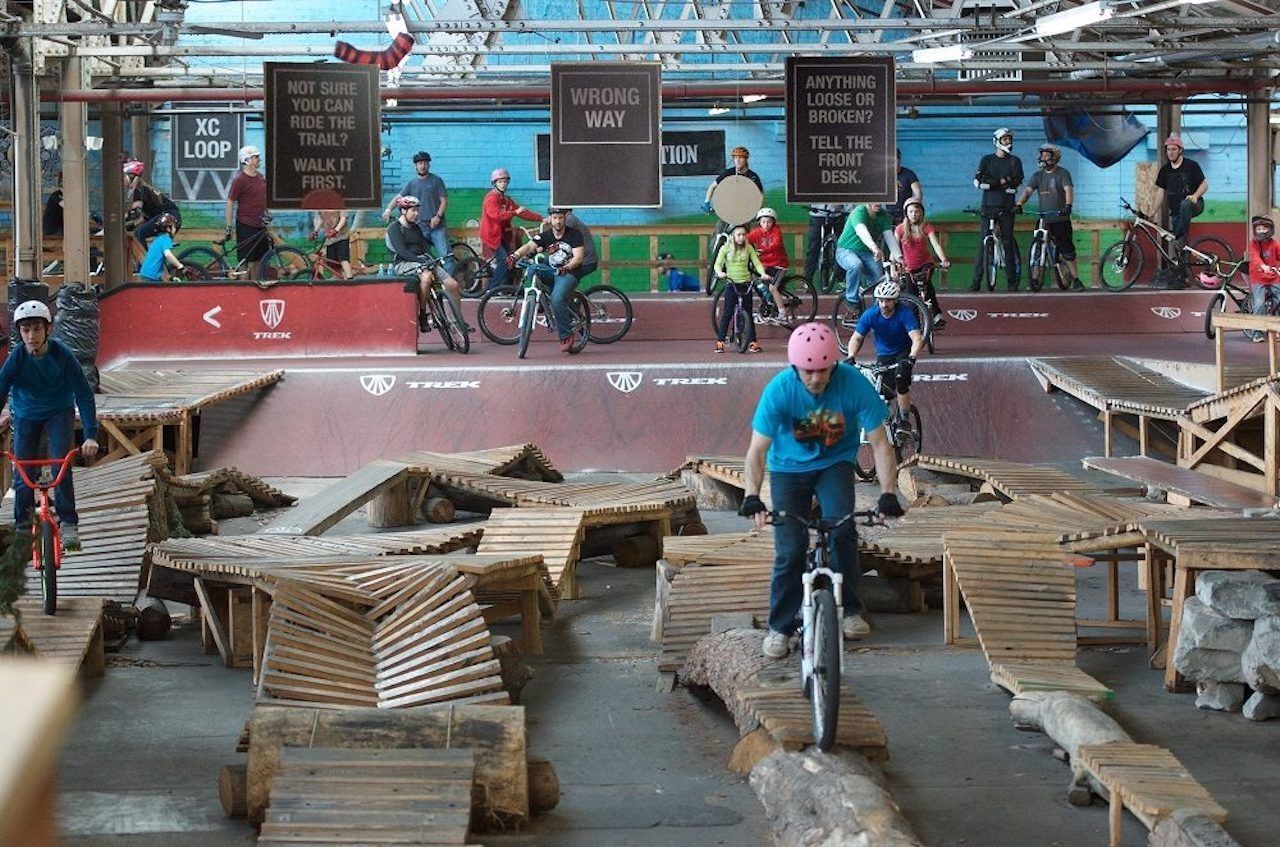 Most pump tracks are outdoors, but Ray’s Indoor Bike Park in Cleveland brings the concept inside, making it accessible during the Midwest’s often brutal winters. It’s huge. The park operates in a massive warehouse and is broken down into multiple sections and runs, including a beginner’s area, a jumps area, and a few specialty areas for different styles of biking like cross-country and supersport. Many are intertwined via connector trails, so covering the entire facility is doable for advanced-level riders. It’s an ideal place to both practice the style you’re good at and to gain ability in other styles in a casual setting — so much so that the park has become a “destination” for bikers across the country. Because this is a maintained indoor facility, it’s not free — a day pass starts at $23 and a season pass is available for $378. Kids under 18 must have a parent with them to sign a waiver. The park is open from October to April. 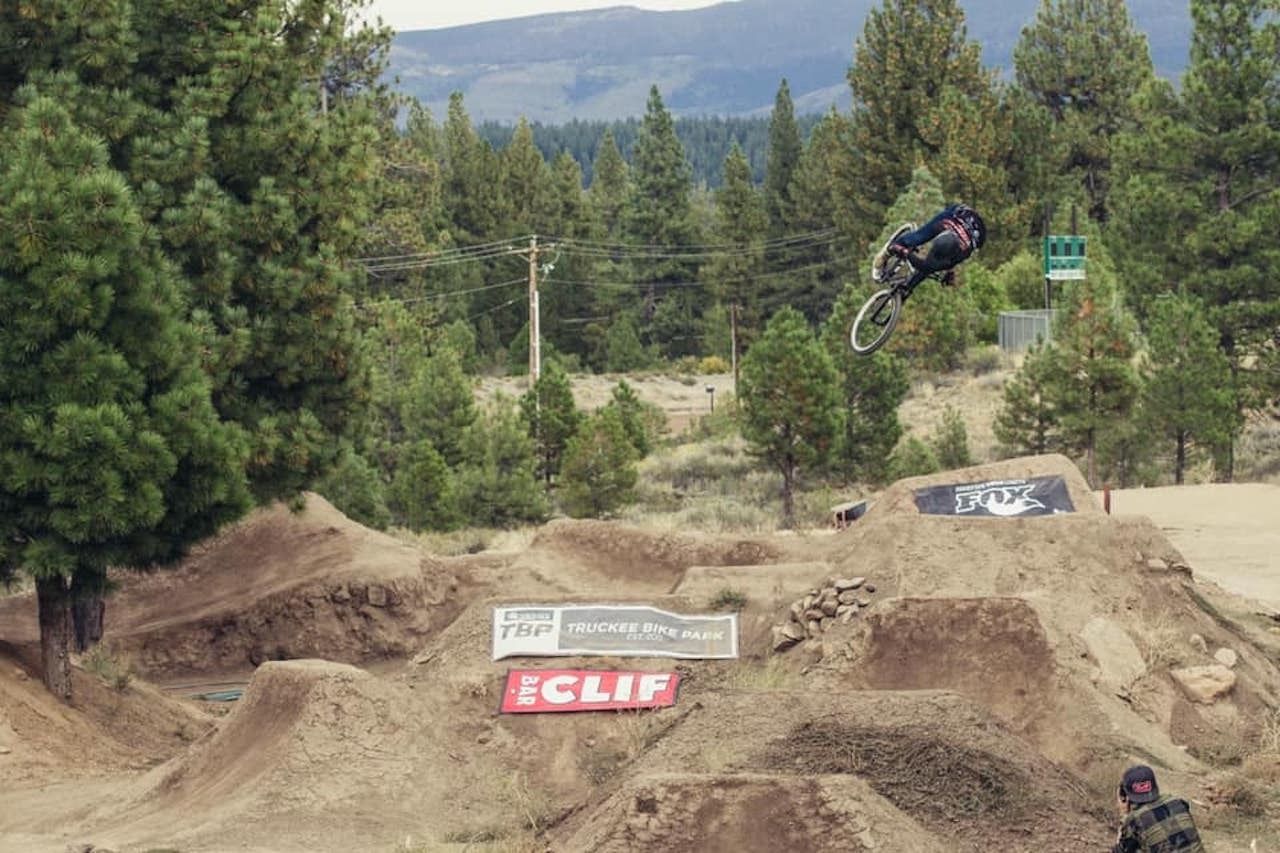 Truckee Bike Park takes the “pump” concept and diversifies it to include multiple tracks which each offer a unique experience. The three “flow lines” are broken down into a beginner, intermediate, and advanced line in which the rider drops in and progresses over a series of berms and jumps. The rider can loop around to do the same track again, or continue on to the next one if feeling confident. The Dual Pump track is a side-by-side trail that provides two options for riders to pump alongside a friend over berms and jumps. The Straight Rhythm track is similar, but instead of looping around, it’s a start-to-finish ride. 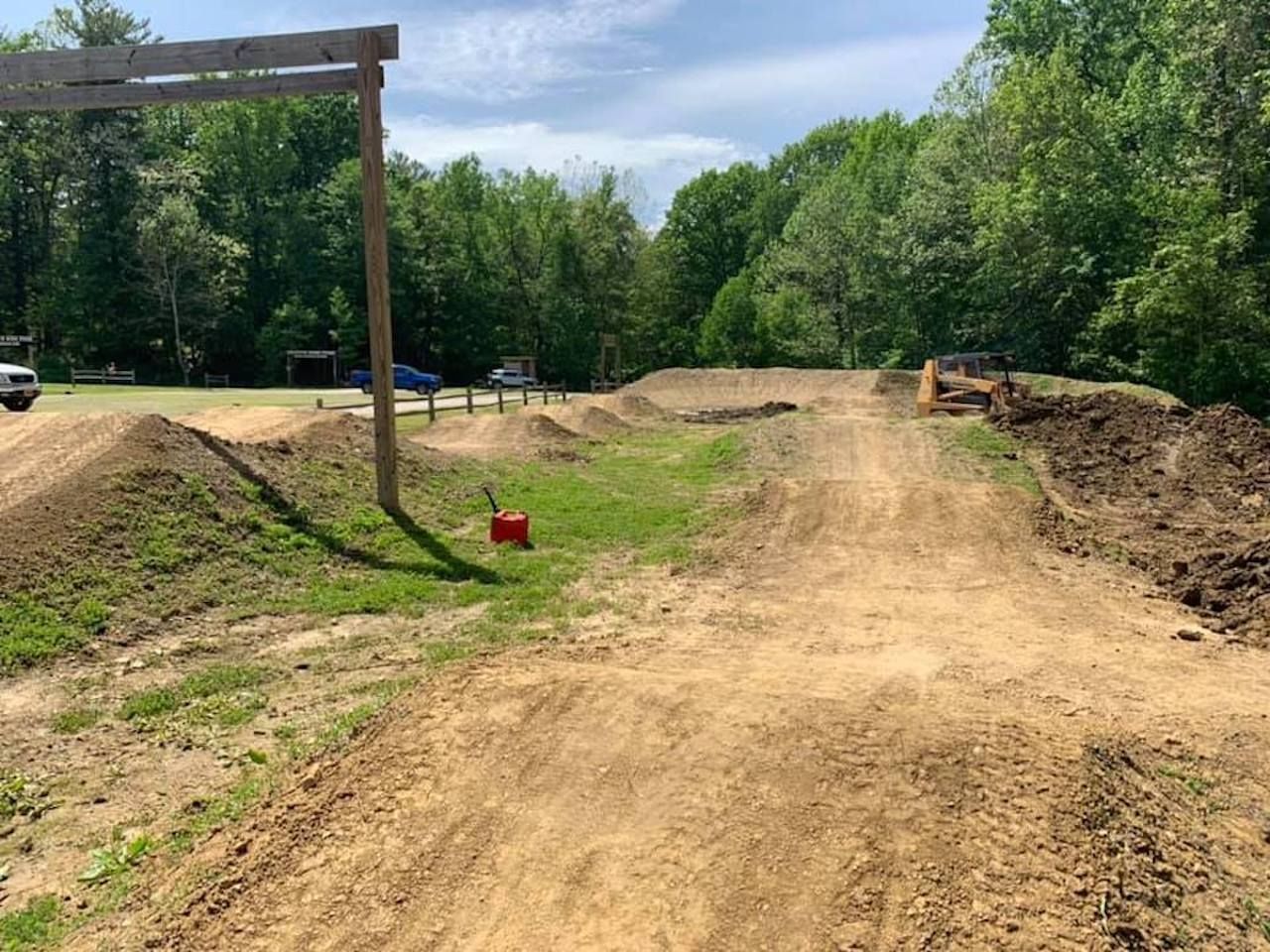 Spread across 300 acres, Griffin Bike Park is a hub of bicycle and pump culture in the midwest. More than two dozen lines are available for riders of all levels, but it’s the pro-level tracks that make this a destination park. The skills park features beginner tracks as well as the all-ability Basic Training Skills Loop that pushes riders through berms and hips over the course of one mile. Some pedaling is involved, but with properly harnessed speed the trail is primarily a cruiser. The Mega Pump is the expert-level, 0.6-mile extreme pump trail with three big jumps and steep descents. 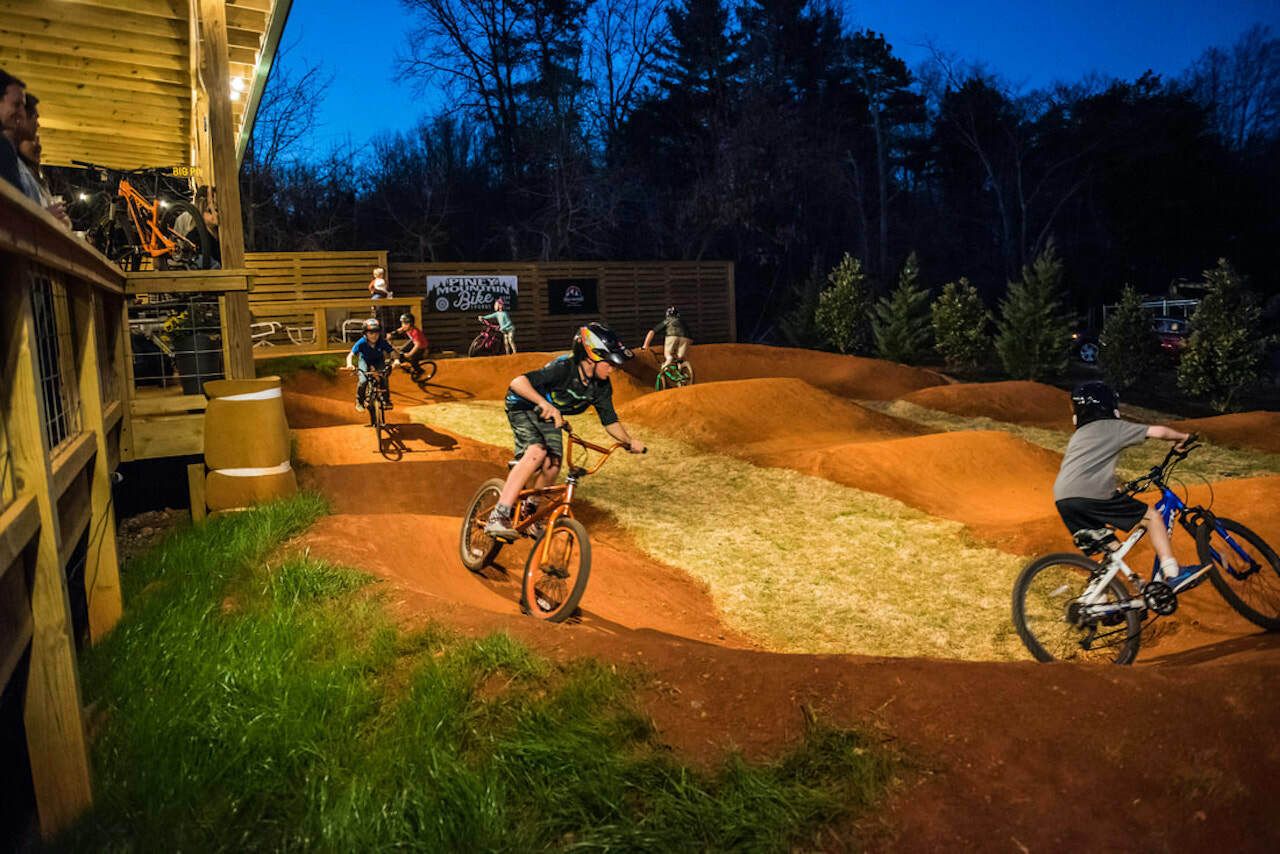 To perfectly hone the practice of pumping, there’s nowhere better than Piney Mountain Bike Lounge. The track is mellow and perfectly suited to cruising, pedal-free, across the plenty of ollers and berms. Lights keep the track open after dark, provided that the facility is open, and staff is on site (and probably out on the track) to provide tips and tricks of the trade. Plus, a visit to Piney is a full-service experience — it has beer and food trucks on site.