While there’s no official count, it’s estimated that there are around 2,000 caves in Puerto Rico – quite a lot for one island. However, just a small fraction of them – around 415 – have been explored. Fortunately, several are open to the public and provide adventure opportunities, including spelunking, rock climbing, swimming, rappelling, and rafting. Some are fairly accessible and welcoming to visitors of all ages, while others require special skills or equipment.

If you’re planning a trip to Puerto Rico, check out these six caves throughout the island, where tours range from gentle walks to group cliff-jumping adventures 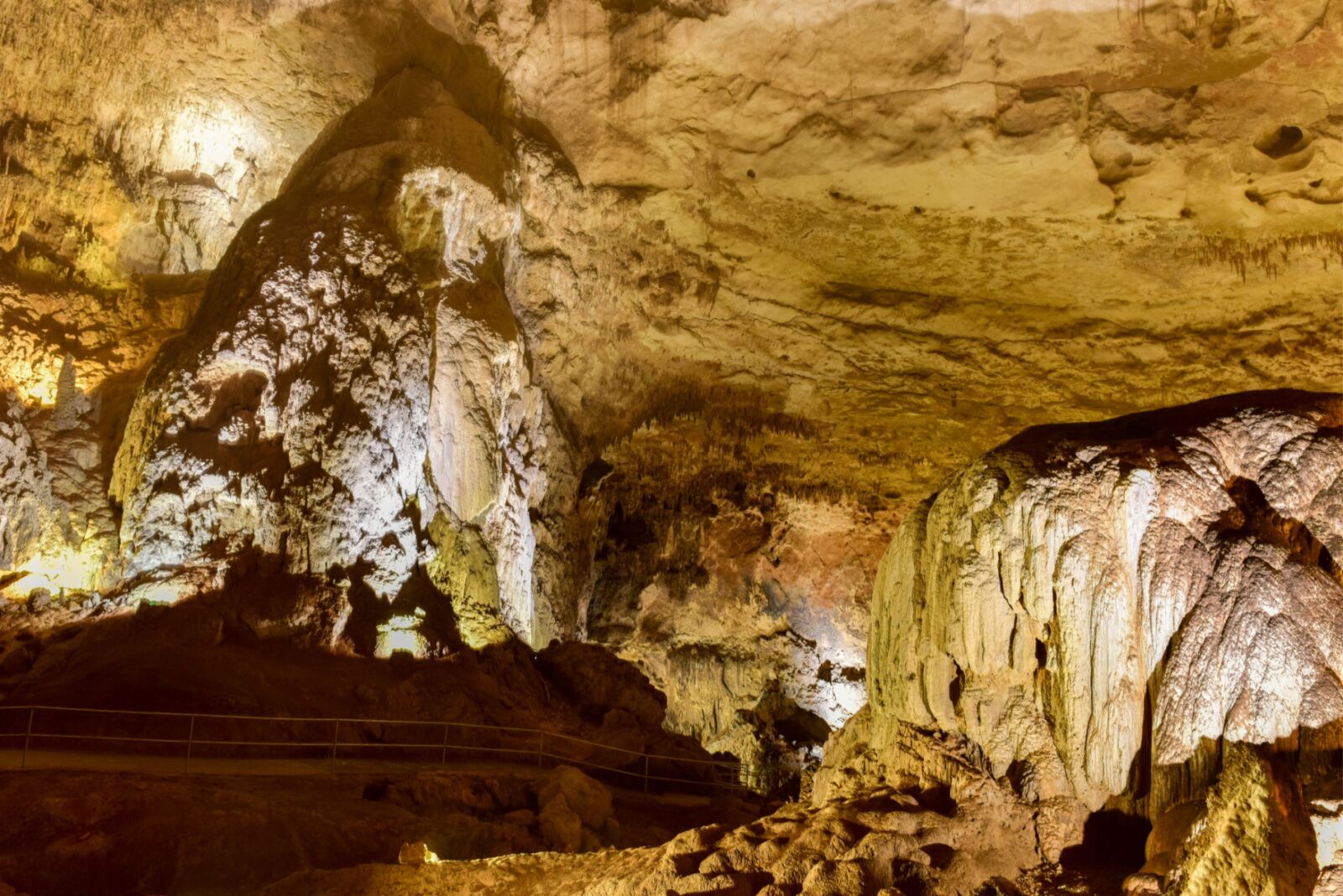 As the largest system of caves in Puerto Rico and the third-largest in the world, Río Camuy Caves is a top attraction for locals and visitors. Vast parts of this system are still unexplored, but to date, 220 caves and 10 miles of caverns have been identified. (A cavern has multiple openings while a cave has just one).

Río Camuy Cave Park is in the northwest region of Puerto Rico, about an hour and a half outside of Puerto Rico’s capital city, San Juan. Tours are offered daily and ideal for most ages and fitness levels since the paths into and through the caves are paved. Visitors can choose from an audio tour or a live guide, both of which provide information on the history and geology of the area.

A tour begins with a downhill walk to the cave’s entrance, then heads inside where hundreds of stalactites and stalagmites come into sight, some as wide as thirty feet. After weaving through the caverns for a while, visitors will see sunlight in the distance; a prelude to the enormous opening soon to appear in the limestone walls. Looking through it from within the cave is beautiful, offering a peek of the jungle’s bright green ferns and chirping birds. After enjoying the picturesque scene, tours retrace their steps back to the cave entrance to make the short return walk uphill. 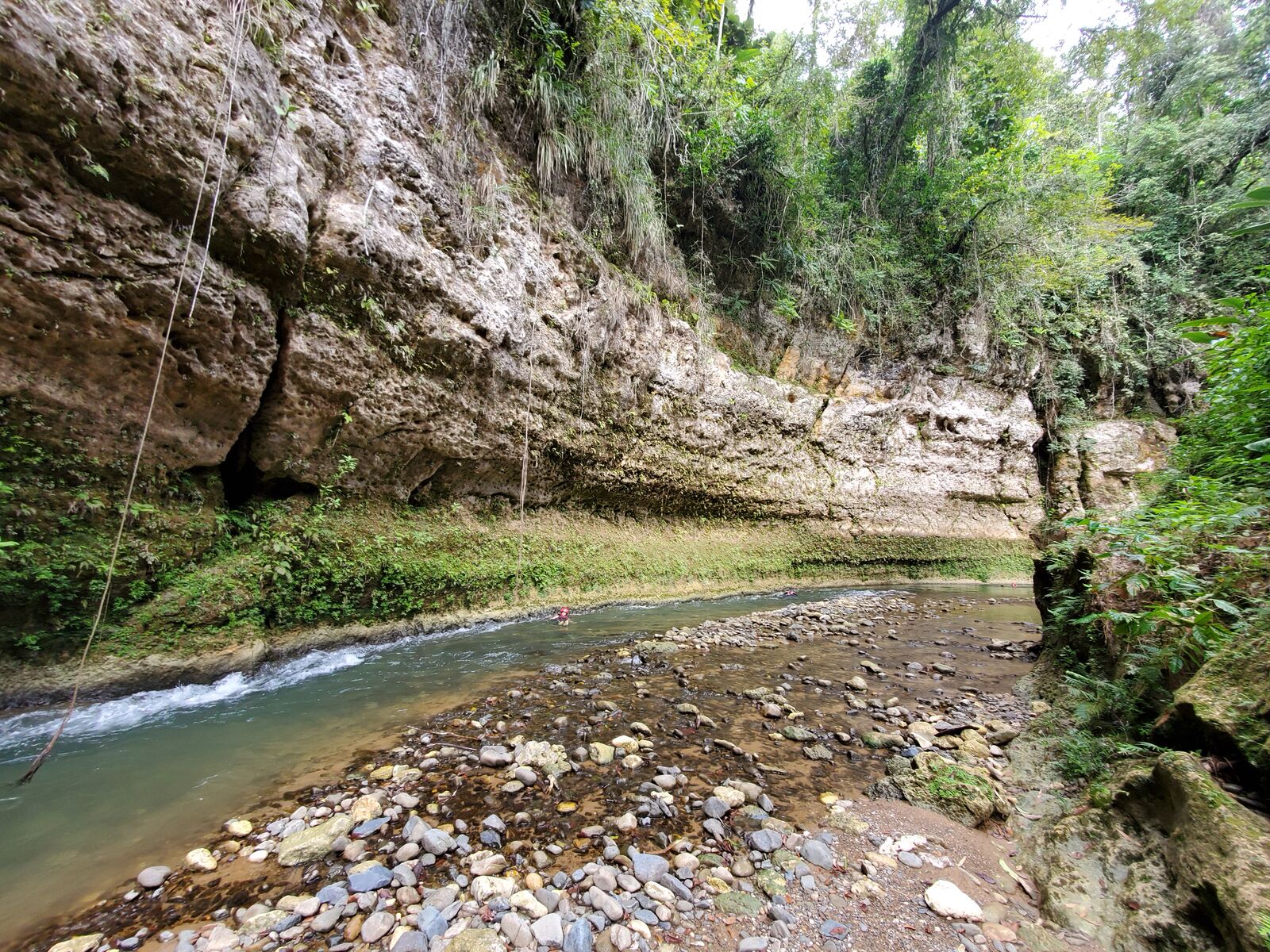 Travelers keen on a slightly more active adventure should visit Cañon de Tanamá, a network of canyons, caverns, and tunnels carved by the ancient Tanamá River. A highlight of this network of caves in Puerto Rico is a 1,000-foot-long tunnel formed by the river over thousands of years and takes up to thirty minutes to float on a rubber tube. Other caves feature giant stalactites and stalagmites along with cave-dwelling wildlife like tiny bats, interesting insects, and endemic tropical frogs,

Most visitors to Cañon de Tanamá begin in Utuado, a small town in the mountainous region of Puerto Rico, about one and a half hours from San Juan. The most popular way to explore this natural wonder is on a half-day tour with companies like Tanamá River Adventures or Explora PR. ON tours, travelers start with a short hike through the forest before traversing through caves, canyons, and waterfalls. Most tours end with tubing, body rafting, or rappelling along the river; adrenaline junkies will want to book a tour that includes the chance to jump from cliffs into the cool waters below. Since this experience includes hiking, climbing, and swimming, it’s best suited for those of average fitness and health.

Longer and more challenging tours, including rappelling into caves and caverns, are also available for adults and teens. 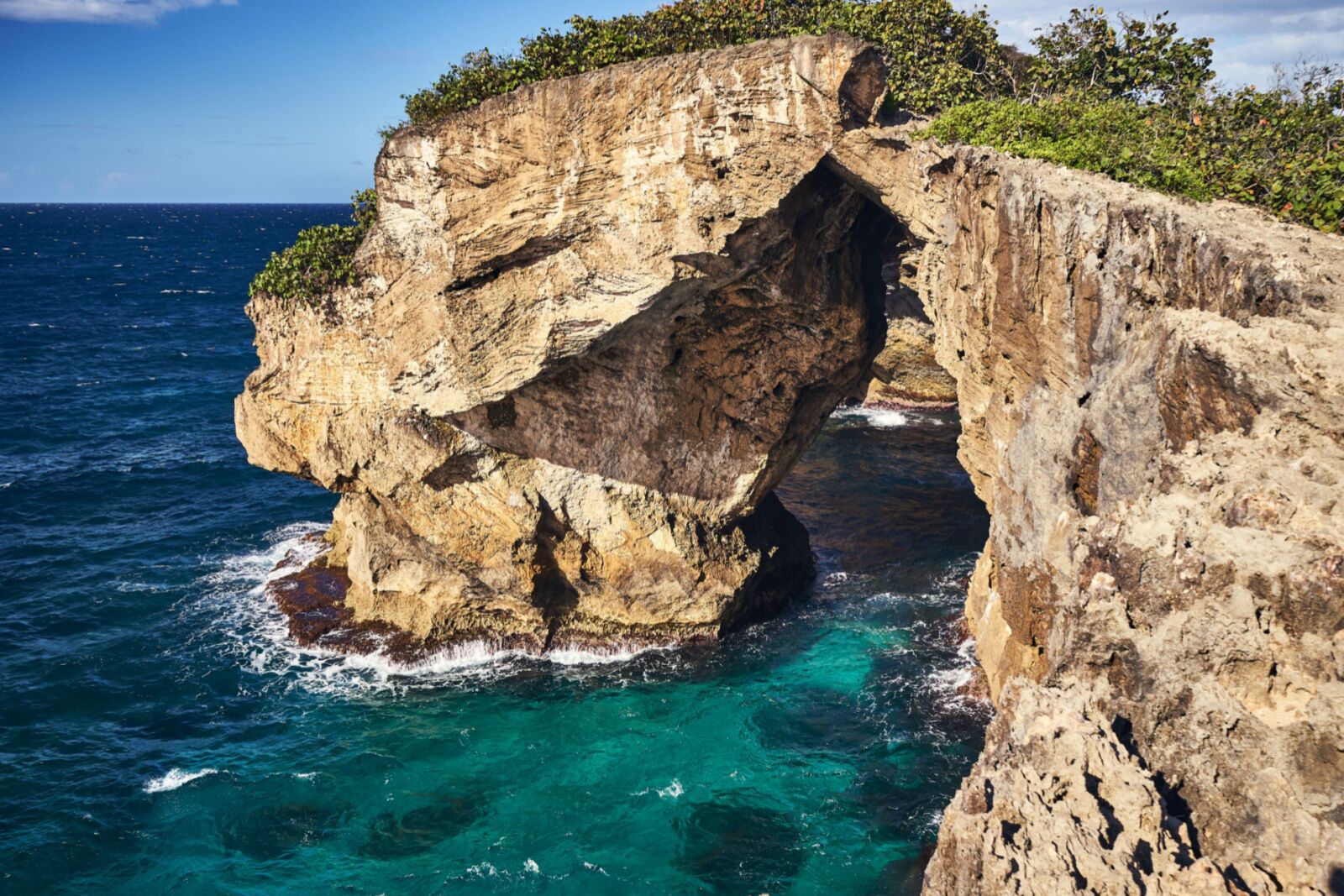 Cueva del Indio is not only a geological wonder and an important cultural site, but also a popular Hollywood filming location for blockbuster movies – the most well-known of which may be 2011’s Pirates of the Caribbean: On Stranger Tides.

On the Atlantic Coast, this cave offers views of crashing waves, a natural rock bridge, and the opportunity to see hieroglyphs carved by the indigenous people of Puerto Rico: the Taino. Because of these carvings, Cueva del Indio was added to the National Register of Historic Places in 2003.

Cueva del Indio is in the town of caves, just an hour outside of San Juan. After parking, it’s a one-mile, moderately easy trail to the top of the cave. You’ll need to climb down into the cave to see the petroglyphs and there’s no longer a ladder — likely to reduce foot traffic into the cave. It’s not recommended, but it is possible to enter the cave through a small gap if you have grippy footwear and long pants. But if you decide you’d rather not climb into the cave, you’ll still enjoy the trip as the views of the dramatic rock formations and crashing waves are quite impressive.

You can visit on your own or take a half-day tour from San Juan with companies like Access Tours PR or Airbnb Experiences. 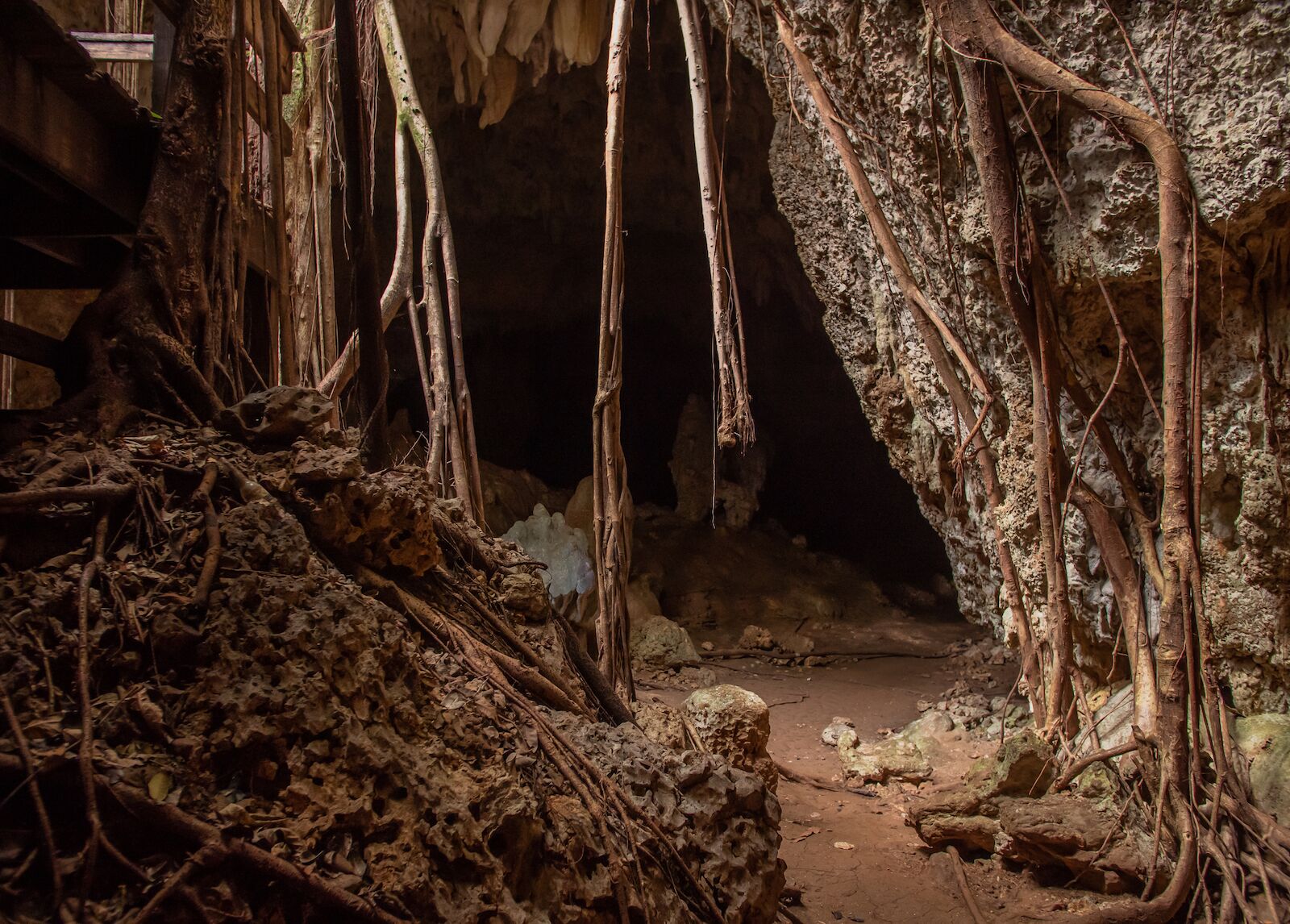 Cueva del Viento is a limestone cave inside Guajataca National Forest filled with fascinating stalactites and stalagmite formations. It’s also home to a sizable colony of bats, so be prepared to see and hear plenty of these flying creatures.

The cave is in the northwestern town of Isabela, about two hours from San Juan. There’s a 2.7- mile, out-and-back trail to the entrance, so come prepared with proper footwear and plenty of water. The wooden steps into the cave aren’t in great shape, so proceed cautiously. And since there’s no lighting, bringing a flashlight is advised – the light from a cell phone may not be enough. Don’t shine the light directly at the bats to avoid upsetting them. The cave is easy to visit on your own and there’s plenty of parking near the trailhead. 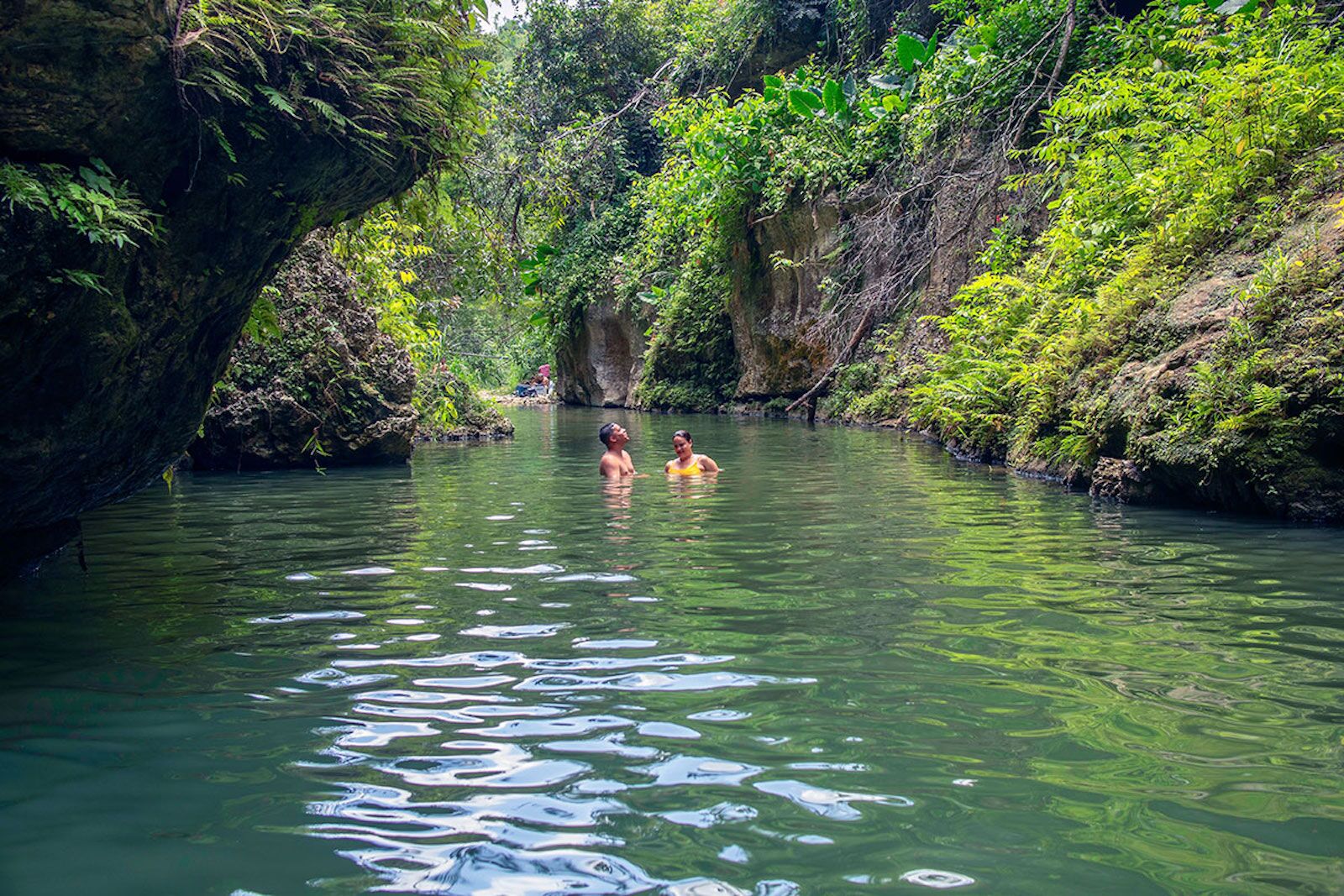 Photo: Puerto Rico as a Local

If you like the idea of swimming, not hiking, through caves in Puerto Rico, Cuevas Arenales and Charco Azul (“sand cave and blue pool”) should top your list. The actual cave is underground, but it’s surrounded by a collection of tunnels, cliffs, and slot canyons formed by water and erosion over millions of years. It’s a natural playground for adventurers and the perfect way to spend half a day.

It’s in Vega Baja, just an hour from San Juan. A visit to Cuevas Arenales will involve some hiking, rock scrambling, wading, and, ultimately, swimming. You will definitely get wet, so wear a swimsuit and dress accordingly. While it’s certainly possible to explore Cuevas Arenales on your own, a full-day guided tour is also a good option. Local guides can help navigate the cave’s dark and underground portions and point out the best places to cliff jump into the deeper pools. Look at options from tour companies like NaturHabitat Eco Tours or Puerto Rico as a Local. 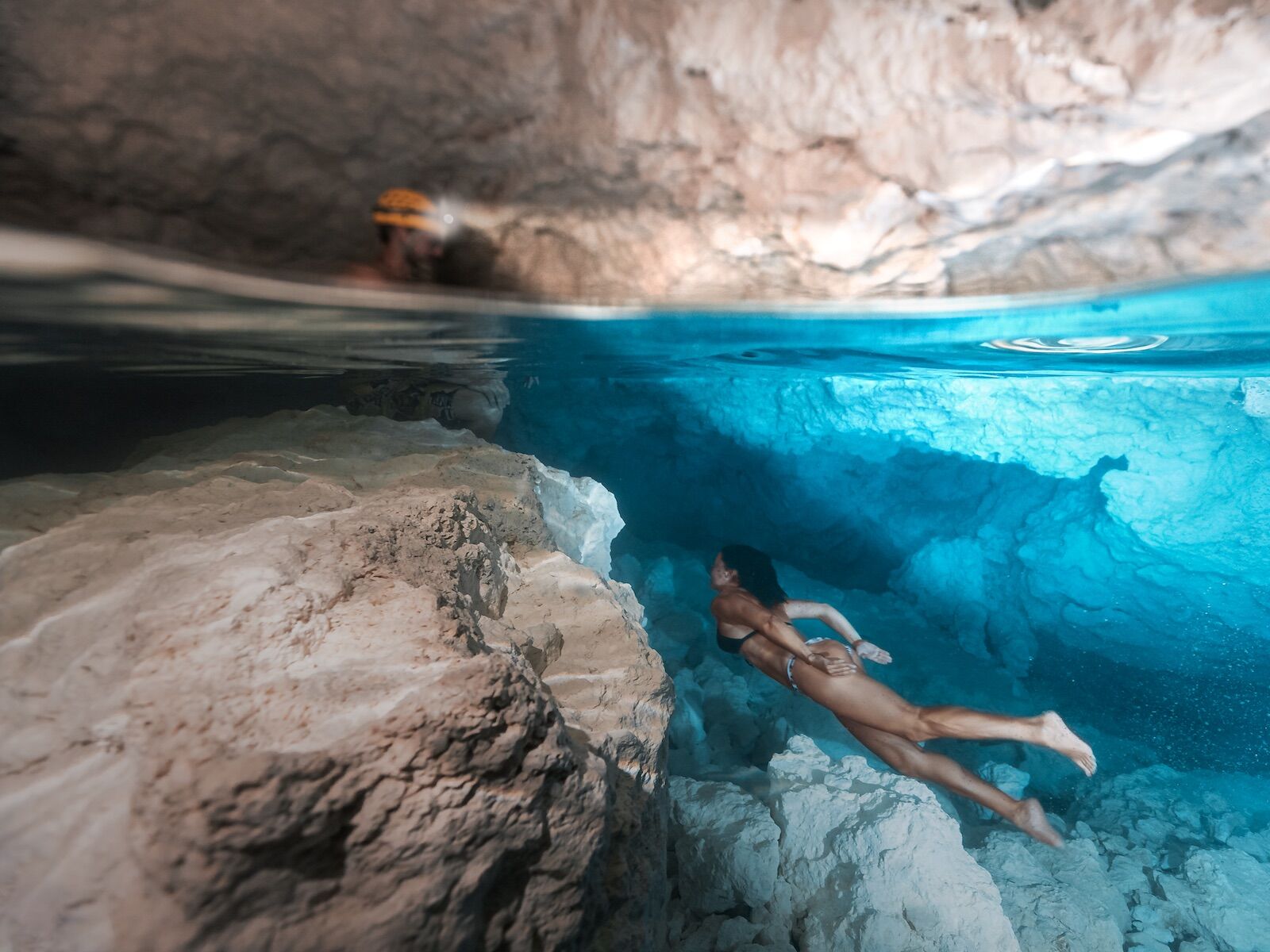 Cueva del Agua is the hardest of the caves in Puerto Rico to reach as it’s on Mona Island — a nature reserve off Puerto Rico’s western coast. There are no hotels or facilities — just a few campsites — and the boat ride to get there takes about four hours. You need a permit from the Department of Natural Resources of Puerto Rico to land on the island, so if you want to see the cave and the rest of the island’s trails and activities, you’ll need to book a tour. Contact Acampa Puerto Rico or Adventures TourMarine to inquire about having them arrange trips. Both companies can land on the island and arrange private hiking and camping trips from the mainland.

As you’d expect from a tropical island, rain and storms are frequent events in Puerto Rico. Access to caves may be restricted during bad weather, so check on the conditions before visiting.

Only Río Camuy Cave Park is a developed attraction. The other caves in Puerto Rico on this list have little infrastructure for visitors, so come prepared with everything you’ll need for the day – don’t expect bathrooms, gift shops, or visitors centers. Nearby parking lots are typically privately owned and fees vary from $2 to $10. You likely won’t have much cell service once you get into the jungles and natural parks, so be sure to download your trail map if you’re using an App like AllTrails or Gaia GPS.

Hiking7 Epic Caves You Can Hike Through in the US
Tagged
Adventure Travel Outdoor Puerto Rico
What did you think of this story?
Meh
Good
Awesome