Many of us have heard some version of the same Halloween origin story: The traditions in the United States, such as dressing up in costumes and going trick-or-treating, actually stem from a pagan festival called Samhain (pronounced sah-win). It was likely heard in grade school, and — content with creepy masks, demanding candy from our neighbors, and haunted houses — most people probably never bothered to explore the issue further. Yet today, Samhain traditions live on, including in the US.

The spread of Christianity squashed most pagan rituals, leaving behind just a shadow of what the original Gaelic (peoples native to Ireland and Scotland) revelers celebrated. Modern Halloween celebrations and Samhain have very little in common — though both occasions call for big parties.

Some 2,000 years ago, Samhain marked the end of harvest and the beginning of winter. It was a time of spiritual importance to the ancient Celts, who were attuned to the mysticism and faerie realm. During Samhain, they believed that the veil between the world of mortals (our world) and that of the spirits, or aos si, became thin. This allowed the living to communicate with their dearly departed, and people held feasts in their honor, sometimes setting a place for them at the family dinner table. According to historian Ronald Hutton, author of Stations of the Sun, groups of revelers donned costumes (meant to either imitate the aos si, or provide protection from them), reciting songs and acting out plays in exchange for food from their neighbors — one possible origin of modern trick-or-treating.

Though many of the customs associated with the original Samhain have been distorted, appropriated, or lost to memory, Samhain is far from forgotten. Modern Wiccans and other pagans (Wicca is a subset of paganism; Druids are another example) of all stripes have kept the tradition alive, adapting their Samhain festivities to suit the contemporary pagan community. These days, Samhain is celebrated with less much mischief but it remains a holiday imbued with spiritual power.

Observed primarily in Wiccan covens (a gathering of witches), modern Samhain celebrations call for a ritual that’s sometimes accompanied by a feast or potluck. Many covens throughout the country — which are often legally classified as churches and presided over by a high priestess — offer non-practicing people a chance to experience Samhain through a public ritual. 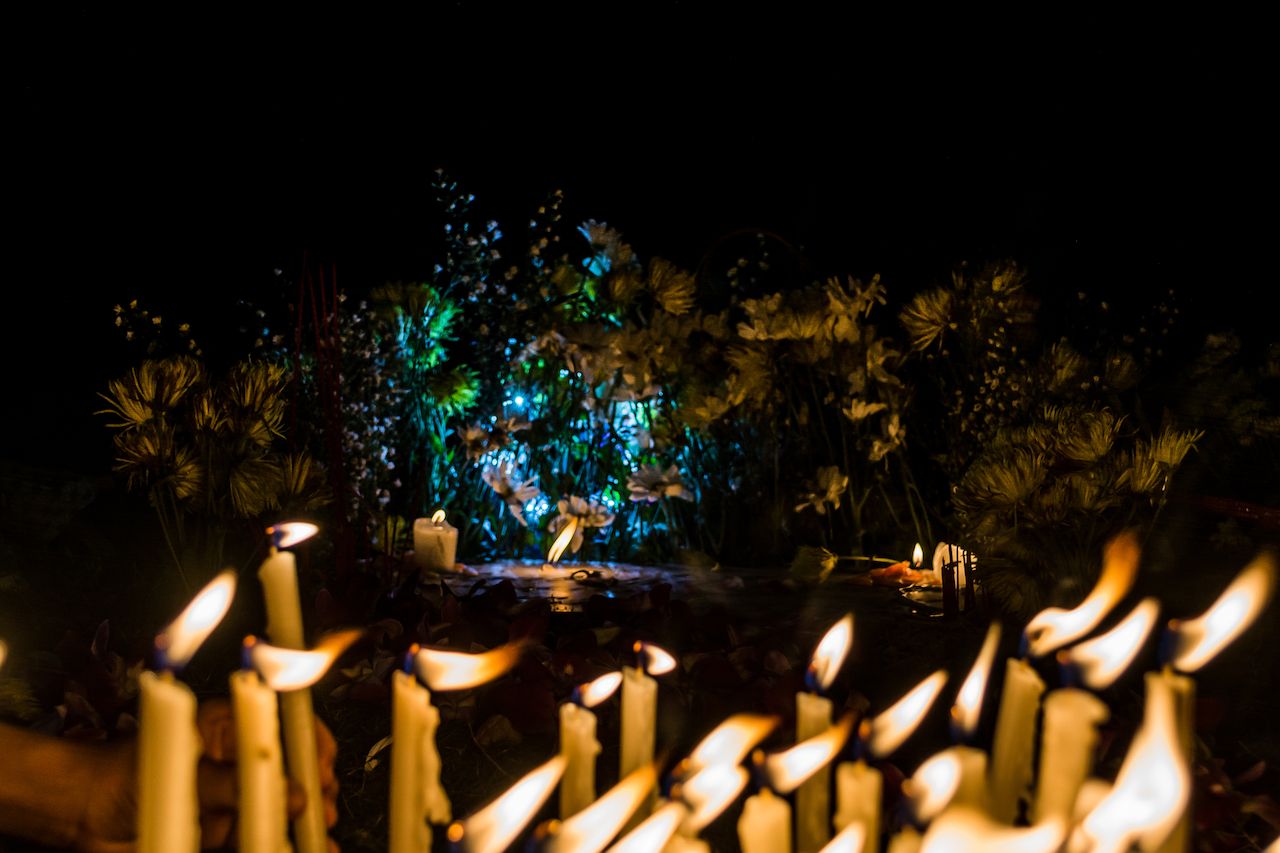 “We hold church services for the eight sabbats throughout the wheel of the year [a cycle of annual celebrations observed by modern pagans, including Yule and Beltane] and some of our celebration days are also held publicly,” says Rev. Debra Jeffreys, high priestess and founder of Bee Hive Coven in Metairie, Louisiana. “Samhain is one of those sabbats.”

Jeffreys explains that Samhain is sometimes known as the Witch’s New Year. Samhain is the darkest period of the wheel of the year, coming just before Yule, when the light returns and the days get longer. “While we’re in the dark, we need to think about, what did you do last year? Did your plans come to fruition? Or maybe you have new plans? It’s a time of contemplation,” she says.

The Bee Hive Coven Samhain ritual is a free event open to anyone — initiated church members, amateur Wiccans, and curious members of the community alike. It’s intended to “honor those who have died and crossed over the veil, because it’s easier to communicate at this time of the year,” Jeffreys says. 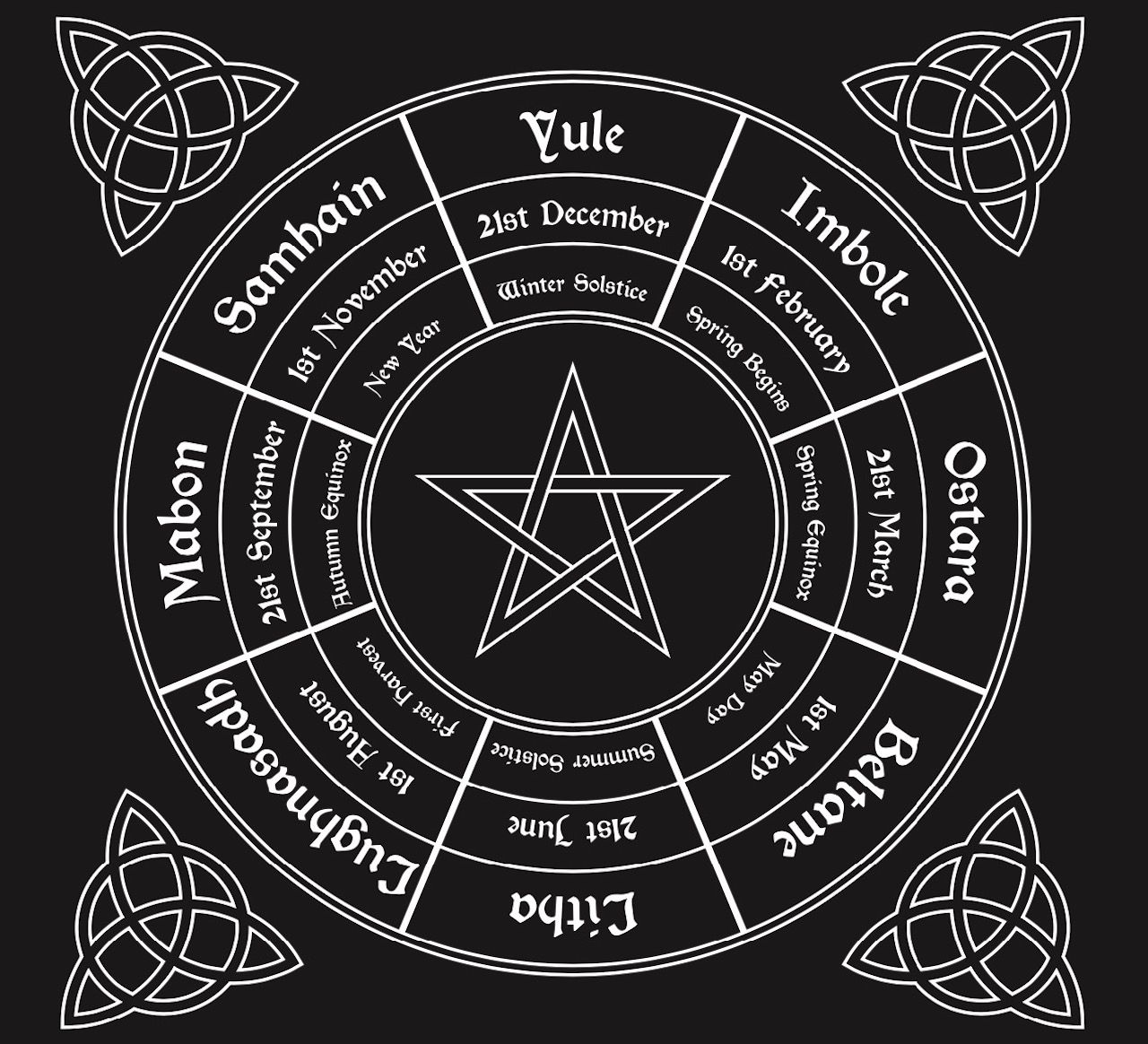 Jeffreys and Ronnie Murphy, the coven’s high priest, lead the ritual. Guests must be “cleansed and blessed” before they can enter the sacred circle. “Usually they’re anointed with oil and smudged with incense that represents the elements and cleanses you from your day to day life and negativity, so you’re entering fresh,” Jeffreys says. “We always ask how do you come to circle? [We say,] ‘You come to circle of your own free will and you enter circle in perfect love and perfect trust’.”

Participants in the ritual typically stand in a circle, holding hands, and will have the chance to name the loved ones they’ve lost during the year. Part of the Wiccan belief system dictates that those who are remembered by the living can never really die, according to Jeffreys. An altar, which holds objects like candles and incense, as well the communion-like offering of cakes and ale, is the focal point of the ritual. Once all of this in place, the ritual can begin.

“We call in the four elements to help build our circle and then we’ll call in Deity to be with us during the ritual,” Jeffreys says. “Usually Samhain will be on a somber note, remembering the people that we’ve lost, looking forward to the new year and things that we want to try to accomplish.”

During Samhain, you remember the past and plan for the future.

Another element of Samhain is the silent supper (traditionally known as the “dumb supper”) which Jeffreys holds privately in her home with friends and church members. During the potluck dinner, guests bring a dish representing their family heritage, as well as mementos for the ancestor altar that represents their departed loved ones. A place is set at the table to honor the dead. The meal itself is held in complete silence.

“We give up our voice for those that have crossed the veil so that we can eat in silence and hopefully hear from them and honor them and acknowledge them,” says Jeffreys.

A chance to learn about Wiccan culture 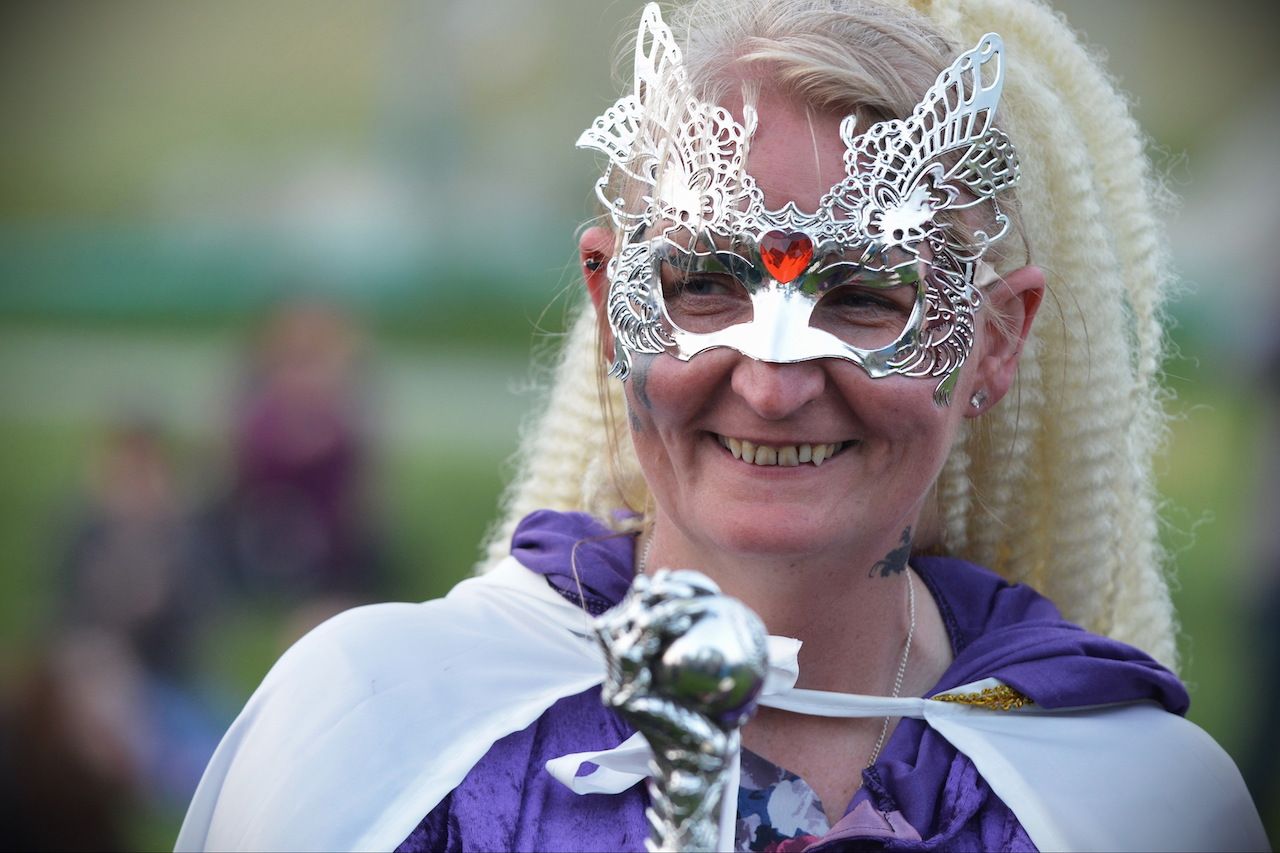 In Asheville, North Carolina, high priestess Queen Lady Passion holds public Samhain rituals for teens and adults. This year’s theme is “Witch Bling,” but she’s never held the same Samhain celebration twice. Past events have included mass handfasting (or wedding) rites, “creepy” music, costumed characters, traditional dancing, and a (metaphorical) journey through the underworld concluding with reincarnation. She doesn’t pick the theme herself, but rather waits “for God/desses to tell me what They want theme-wise.” Then she spends months constructing their vision.

“When I wanted to create a fairy realm, I bought dozens of Barbies and dressed them in diverse natural things like leather, feathers, tinsel, lamé, and posed them atop glowing ‘toadstools’ I made from upside down glow-in-the-dark bowls and painted stems,” the high priestess explains. “I had folk swoop down from treetops, live drummers, and flutists.”

Queen Lady Passion doesn’t outline much etiquette or set strict rules for the participants, but she does want them to do more than just stare.

“We just demand physical participation and reverence,” she explains. “I’ll politely kick out anyone who demurs or radiates a negative vibe. Participants feel wiped out, having given it their all, but also changed, heartened in difficult to articulate ways.”

Queen Lady Passion began holding public rituals in order “to disabuse bigots of their negative notions and assumptions, and to show parents and children the joy of circling and dancing hand-in-hand.”

Bee Hive Coven’s reasons for inviting the public to celebrate Samhain are much the same. They want to provide a safe space for curious people to ask questions and hopefully dispel stereotypes about Wiccans. Murphy laughs recounting the number of times he’s encountered people asking if witches fly or sacrifice babies.

“Our purpose is education and mainstreaming,” Jeffreys says. “We are the people next door, we are your normal everyday person. We just happen to see deities differently than the mainstream. Being a witch, or a pagan, or a wiccan — it’s not a bad word.”

Public Samhain celebrations you can join

You can find almost every Samhain celebration around the country listed at Witch Vox. Here are five to get started.

Pittsburgh Witches Ball: The longest running witch’s ball takes place in Pittsburgh on November 9. Here, pagan-minded people gather for a night of live music, dancing, tarot card readings, and a buffet. Guests can bring items to honor any loved ones who passed away in the past year to add to the altar. This year’s theme is River Styx. Tickets are $35 ahead of time, and $45 at the door.

Spirit’s Edge Samhain: The Spirit’s Edge Shamonial Temple in Missouri holds public rituals throughout the year. This year’s Samhain celebration will take place on November 2, and includes “A Seeker’s Salon” before the ritual where guests can discuss and learn more about Wiccan traditions. The ritual will be followed by a potluck and a chance to get to know the other participants. Anyone is welcome and the event is free.

Michigan Witches’ Ball: The 23rd annual Michigan Witches’ Ball welcomes goths, pagans, druids, and witches to celebrate Samhain and “promote religious tolerance.” This year’s party takes place on October 19, and the theme is “Wondrous Tales.” Tickets are $50 and the event is for ages 21 and over. A raffle will also be held to benefit the Michigan Pagan Scholarship Fund.

Samhain Ball: This Samhain celebration in upstate New York is hosted by Pagans in the Pub, a monthly meetup open to the public’s pagan community. The Samhain Ball takes place at the local Unitarian church. The ball holds a ritual and a costume contest, and snacks and mead will be served. Admission is $20.

Seattle Reclaiming Samhain: Seattle’s Samhain ritual takes place on ancestral Duwamish land, and part of the proceeds go to Real Rent Duwamish. This “clean and sober” ritual requires that participants bring pillows, mats, or chairs for the “90 minutes of magic” that includes a trance as well as a spiritual dance accompanied by drumming. Tickets are anywhere from $20 to $13 dollars, but no one will be turned away for a lack of money.

More like this: 7 fascinating Halloween traditions around the world
What did you think of this article?
Meh
Good
Awesome
Bookmark
Posted In
Religion Events + Festivals Holidays