Death is a universal experience, but how people acknowledge it is different around the world. Some mourn the passing of life while others celebrate their loved ones’ new journeys. In many cases, food is an important aspect of these rituals and traditions — whether it’s enjoyed by the living or offered to the dead.

This is how different cultures honor the dead with food and drinks. 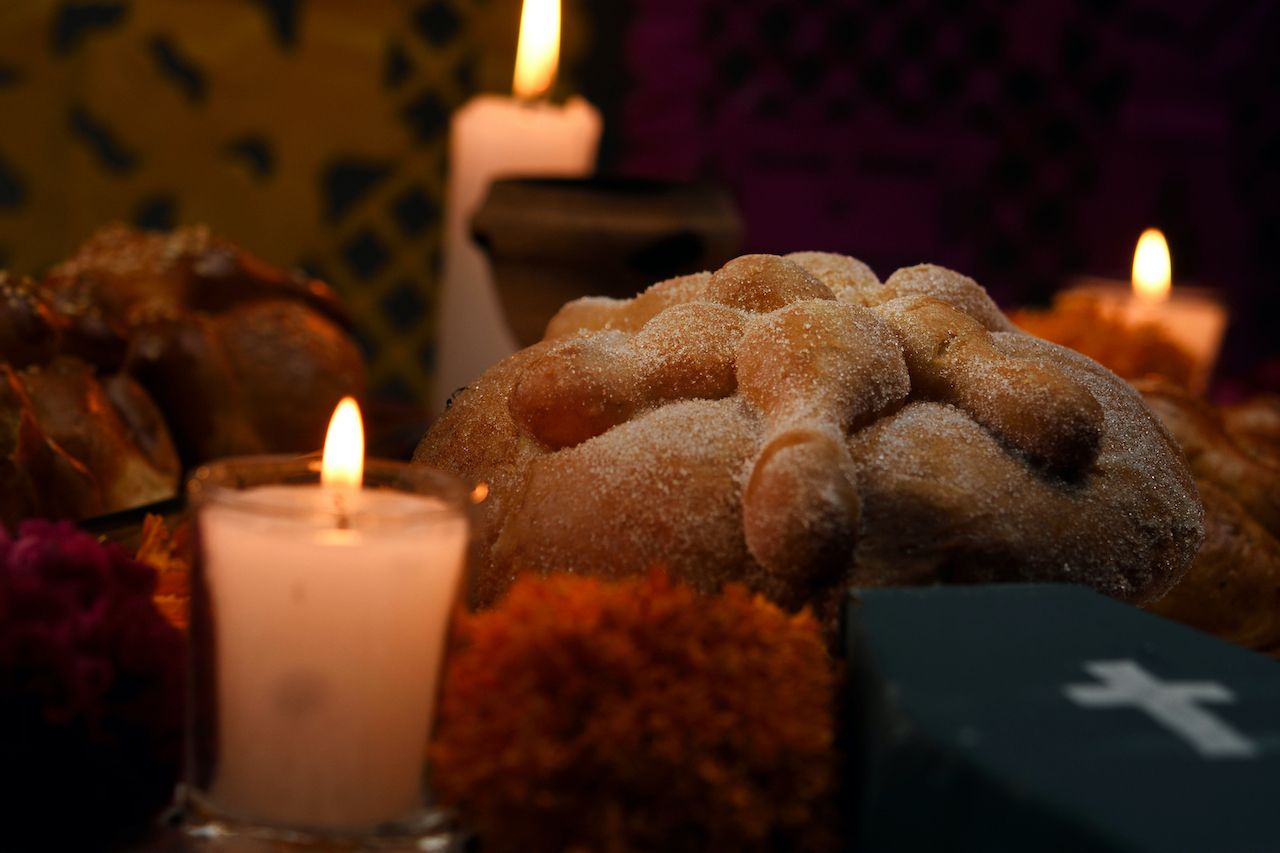 From October 31 to November 2, families in Mexico celebrate Dia de los Muertos, or Day of the Dead. The celebration honors those that have passed with ofrendas during what is traditionally believed to be the time of year when the veil between the living world and the spirit world is at its thinnest. Dia de los Muertos dates can be traced back to Aztec traditions that are thousands of years old and have since blended with Catholic influences over time. Among the tributes left on altars for family members is a number of different food and drinks.

Calaveras de azúcar, or sugar skulls, are some of the most famous, and represent both sweetness and nostalgia (though it’s important to note the shaped and painted sugar skull is not typically eaten). The deceased ancestor’s favorite food is typically offered up as well as is pan de muertos (bread of the dead), which is a semi-sweet bread shaped like bones and dusted with sugar, according to NPR. Pumpkin or amaranth seeds are also common and were used to make skulls before Europeans brought sugarcane to the region. Finally, there’s alcohol. Pulque, a lightly alcoholic drink made from fermented agave sap, was the drink of choice in the pre-Columbian era, though tequila, mezcal, whiskey or any other beverage is left today. 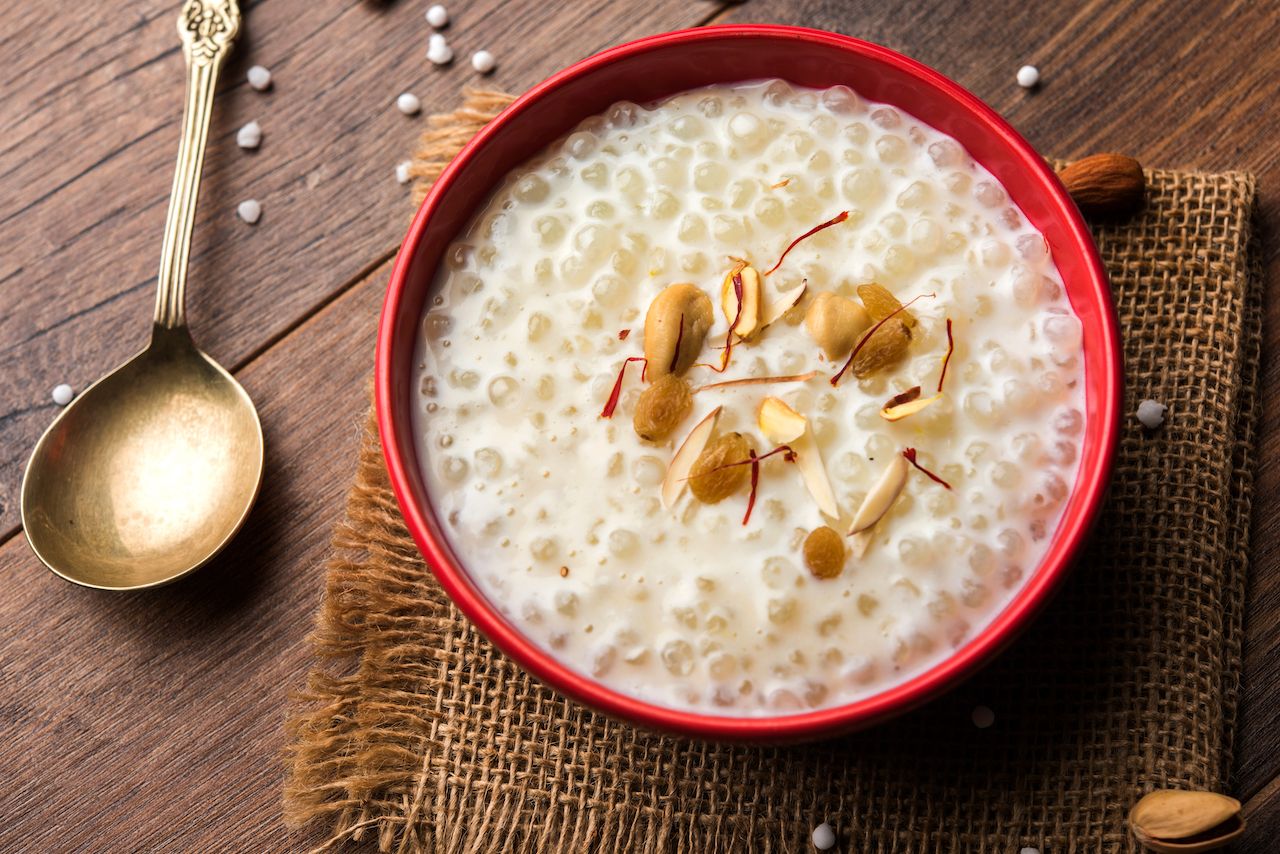 Hindus in India and elsewhere celebrate Pitru Paksha, a 15-day period when food offerings are given to pay homage to ancestors. It dates back to the story of Karna, a demi-god in the story of Mahābhārata who questioned why people offered jewelry and flowers to the dead but no food.

People celebrate in different ways, the Times of India notes, but one important aspect is to avoid any meat or fish products, onions, garlic, and junk food. Offerings of rice, black sesame seeds, barley flour balls, and water are left for those that have passed. Other foods include basundi (condensed milk), kheer (a rice and milk dessert), lapsi (wheat grain porridge), rice, dal, and a vegetable curry. Traditionally, the food offerings are first given to cows, dogs, and birds, which deliver it to the pitrs (ancestor spirits). 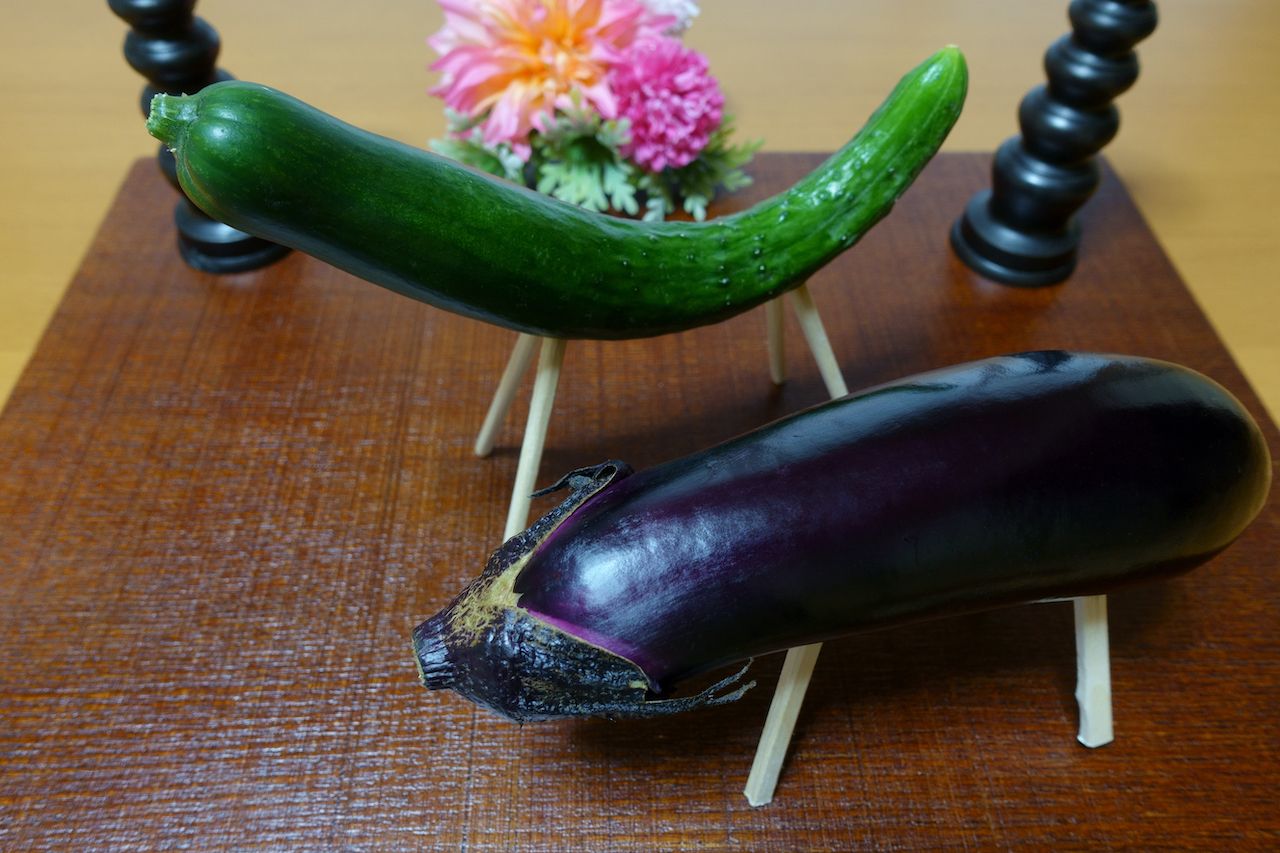 One of Japan’s largest festivals is the three-day Obon, also called Bon, festival, which takes place August 13-15 (though some parts of Japan celebrate in July). Obon dates back 500 years. One origin theory is that a Buddha disciple saw the spirit of his mother, who was in the Realm of Hungry Ghosts, and the Buddha said food offerings help the spirits.

Today, food remains an important part of the celebration. Japanese Buddhists leave seasonal fruits and vegetables on their butsudan (the Buddhist family altar) along with flowers. Cucumbers are carved into horses and eggplants into cows to serve as spirit animals to help guide ancestors back from the other side.

Obon is one of the three largest celebrations in Japan after New Year and Golden Week, and celebrations aren’t limited to the home. Food like takoyaki (octopus balls), yakitori (barbecue chicken skewers), and dango (sweet dumplings) also take center stage during parades and events. 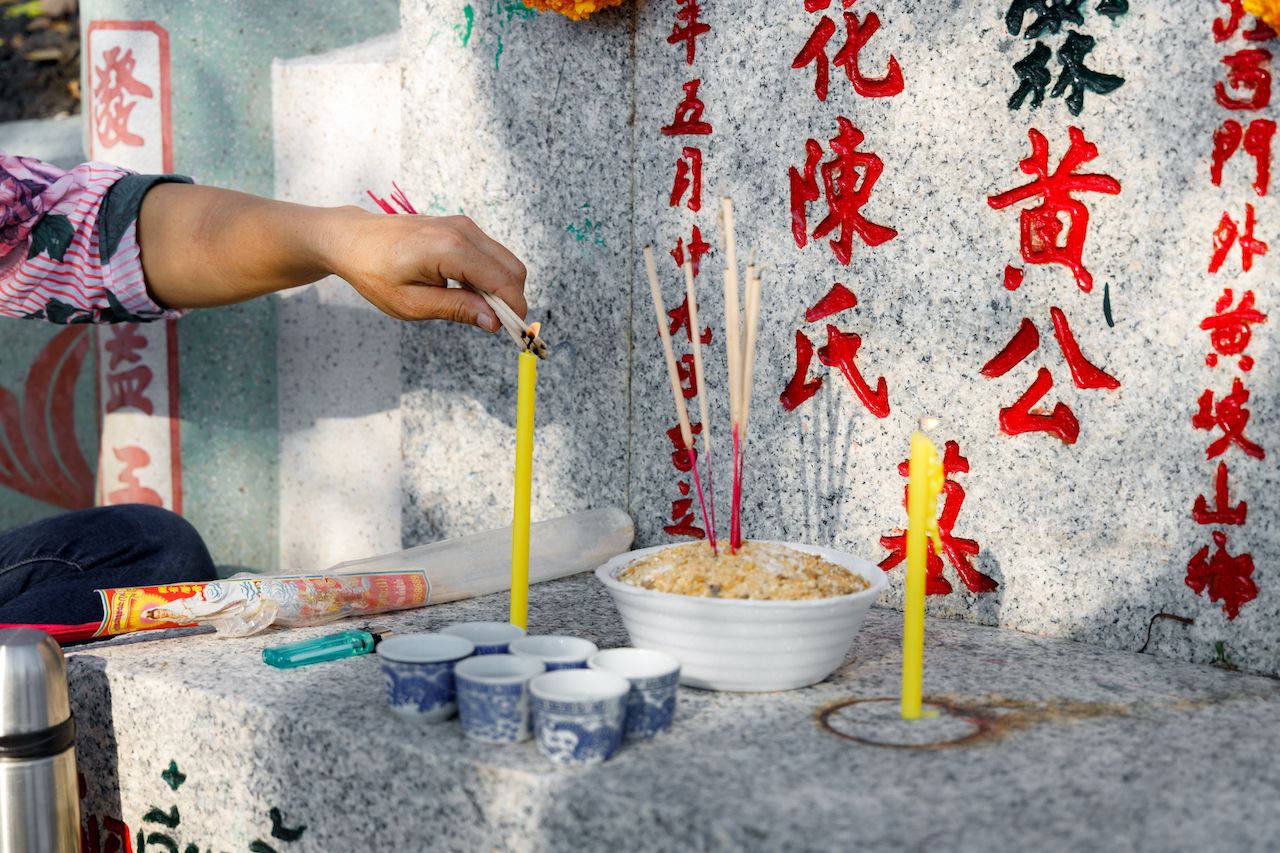 In China, Qingming Festival, which typically falls on April 4 or 5, has been celebrated for more than 2,500 years. It’s celebrated by Han Chinese as well as many of the country’s ethnic minorities, and it’s a designated day to demonstrate respect for ancestors. Sweeping an ancestor’s tomb is the central observance (the day is also called Tomb Sweeping Day in English), but food offerings and fire crackers are also common.

Traditionally, the day before the Qingming Festival was Chinese Cold Food Day. As the name suggests, only cold foods are eaten, and the practice spans each day of the Qingming Festival. Foods that are eaten and presented as offerings are cooked beforehand, like sweet green rice balls (made with rice flour and bean paste), sazi (Qingming cakes of fried flour, egg, sesame, and onion), peach blossom porridge, and Qingming snails.

5. Ireland and other Celtic regions 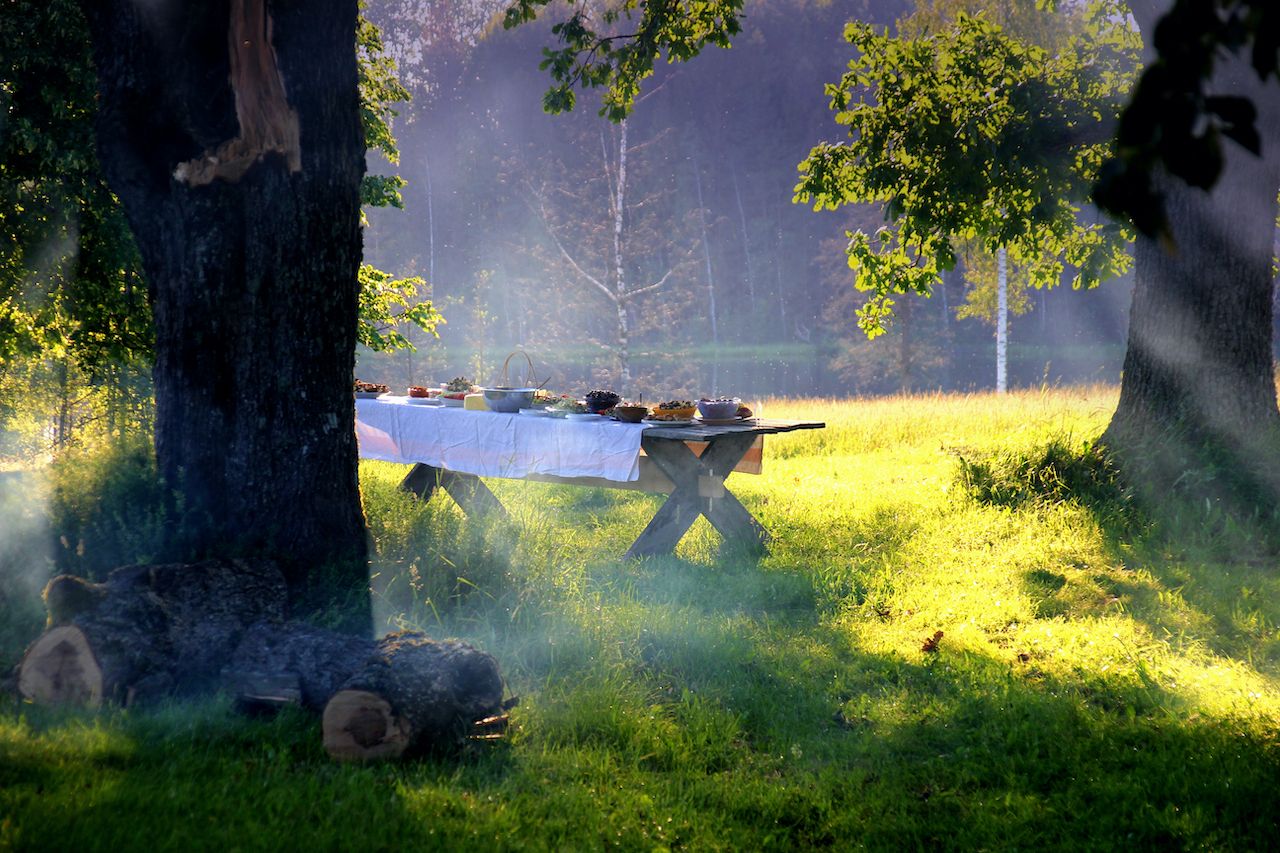 About 2,000 years ago in what is now Ireland and northern England, the Celtic people practiced Samhain around October 31 to November 1. It was believed to be the time when the border between the living world and spiritual world dissolved, and it marked the time to celebrate ancestors, harvest, and the changing of the seasons. It was originally celebrated for three days and three nights, and Druid priests would light community fires with a wheel and make animal sacrifices. Costumes were commonplace, and feasts were held where people would heartily drink beer and mead. In the United States, many Halloween traditions can be traced back to Samhain.

In the Medieval Ages, people added a dumb supper to the celebration. Families set the table for themselves and their ancestors, and ate a seasonal meal in complete silence (“dumb” in this case refers to not speaking). After dinner, doors and windows stayed open so the dead could come and go as they pleased to eat cakes left out on the table.

ReligionFrom Modern Mummies To Fantasy Coffins, 9 Death Rituals From Around the World
Tagged
Food + Drink Holidays Religion
What did you think of this story?
Meh
Good
Awesome