Death is one of the common denominators of the human race, but the ways that we respond to it are vastly different.

Four thousand years ago, the early Dilmun civilization buried their dead in thousands of low, cylindrical towers, the remnants of which can still be seen dotting the landscape of Bahrain to this day. The Mayans would bury the deceased with corn in their mouths to feed their souls during their journey to the afterlife. And the Chachapoya people of modern-day Peru placed corpses in a purunmachu — a sarcophagus made from clay — which was then balanced on the ledge of a high cliff face, standing sentinel over their ancestral lands.

We don’t have to turn to the history books to uncover unbelievably diverse examples of burial practices. Many have endured for centuries and are still common today; others are relatively new traditions, shaped by environmental challenges. Here are nine of the most fascinating and intriguing ways cultures around the world handle death. 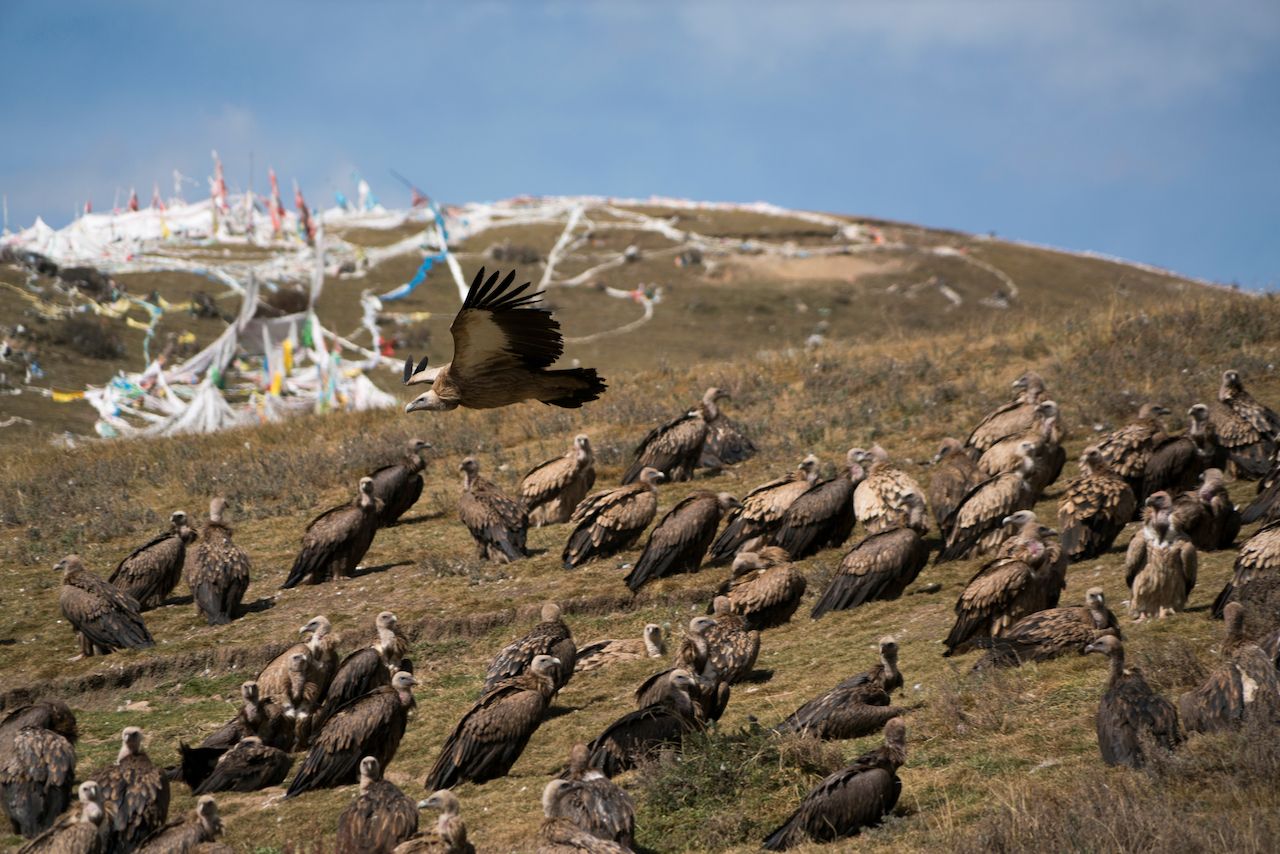 The ancient practice of Tibetan sky burials sees the corpse of a deceased placed atop a high peak, to be eaten by vultures and other birds of prey. It might sound macabre to foreign ears, but it’s both sustainable and serves a symbolic purpose, representing the impermanence of life for followers of the Buddhist faith. The corpse is no more than a discarded shell; the soul has already moved on toward reincarnation. Interestingly, it’s considered a good sign if the entire body is consumed, as Tibetan custom holds that even vultures — unfussy as they are — wouldn’t eat the body of a person who committed evil deeds. 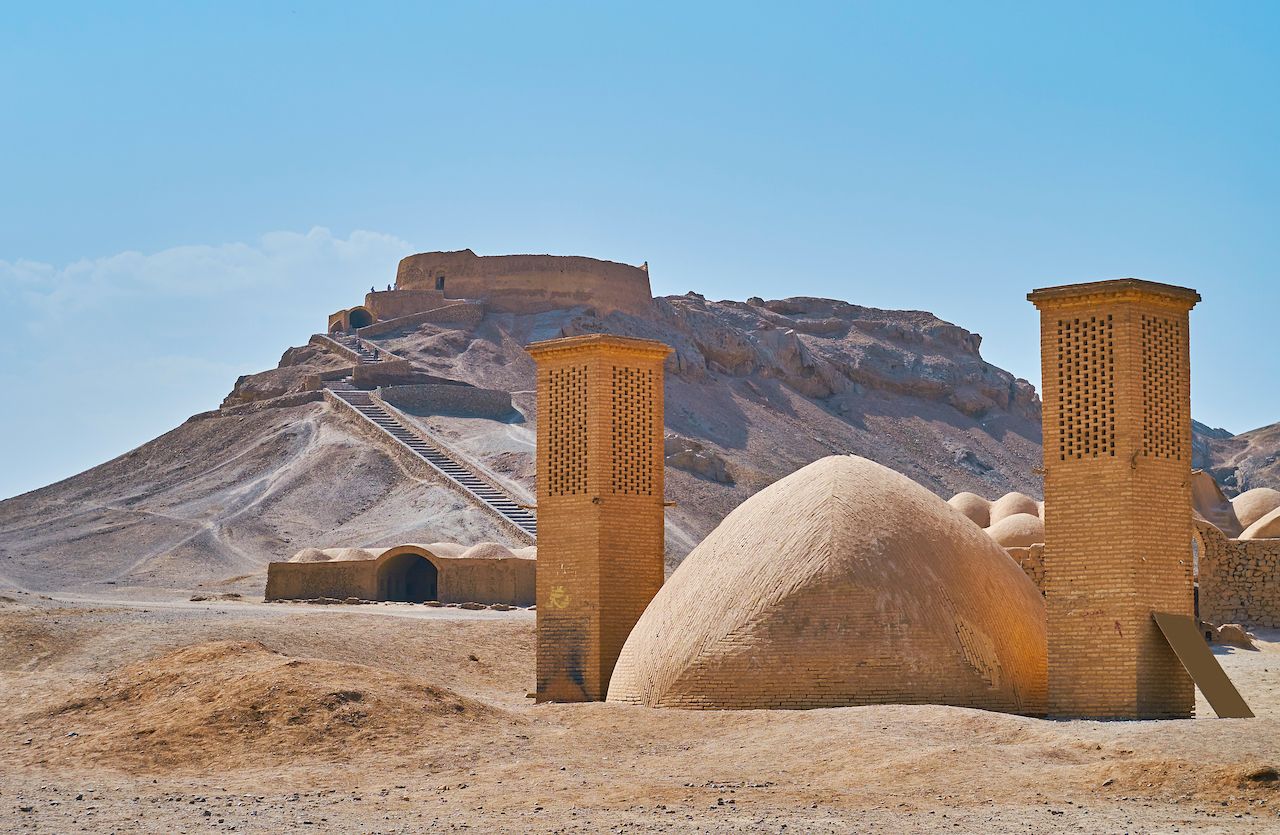 The concept of sky burials isn’t unique to Tibetan Buddhists. It’s also a key Zoroastrian tradition, in which followers lay out the dead on top of a purpose-built “Tower of Silence,” also known as a dakhma. In Zoroastrian belief, death is considered evil, and polluting the pure earth with decaying matter is seen as sacrilegious. Instead, bodies are exposed to the elements and left to be eaten by scavenger birds. Zoroastrianism was born in ancient Iran around 3,500 years ago, and Towers of Silence can still be seen dotting the country’s landscape — particularly in the area surrounding the historic city of Yazd. The use of these towers for funerary purposes was outlawed in Iran in the 1970s, although it continues to this day — albeit in ever-decreasing numbers — in the Indian city of Mumbai, another hub of Zoroastrianism.

3. Cremation on the pyres of Varanasi 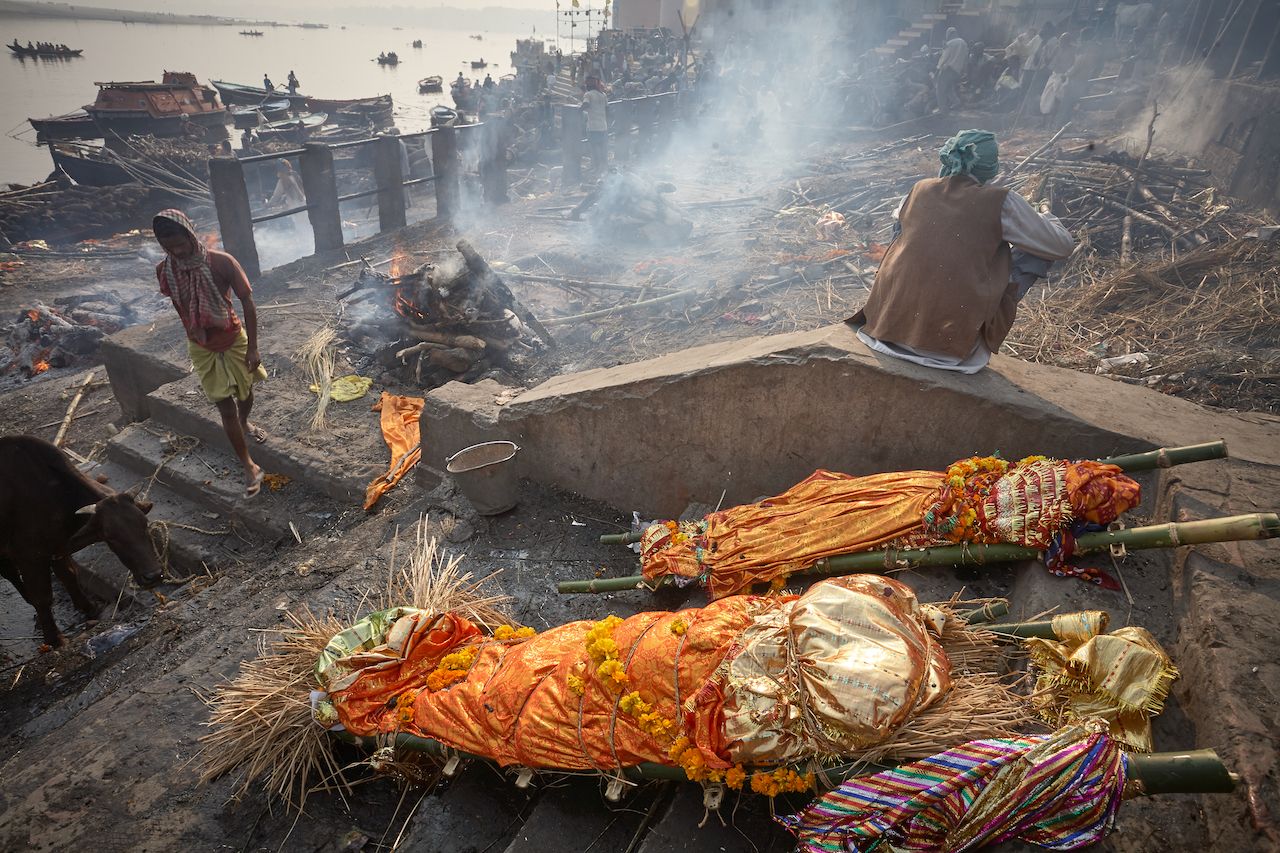 Perched on the banks of the Ganges River in the northern state of Uttar Pradesh, Varanasi draws visitors — both pilgrims and tourists — from around the world. Varanasi’s main attraction is the funerary ghats of Manikarnika and Harishchandra. These sprawling riverside cremation grounds are big business for Varanasi, as Hindus believe that those cremated in the holy city will be freed from the cycle of life, death, and reincarnation. In fact, demand is so high that Varanasi is the only city in India in which the funeral pyres burn 24 hours a day, seven days a week. On average, nearly 200 bodies are burned every day within the city. Before being taken to the pyres, bodies are swathed in colorful cloths and carried down to the Ganges on a bamboo stretcher by male family members to be briefly immersed in the river’s waters. After being left to dry on the steps of the ghat, the corpse is taken to a burning pit and covered with mango wood or sandalwood by the family. Joss sticks, incense, and sandalwood powder are used to mask the pungent smell of burning hair and flesh. Finally, the ashes, and any other remains that didn’t crumble in the intense heat, are collected and scattered on the Ganges. 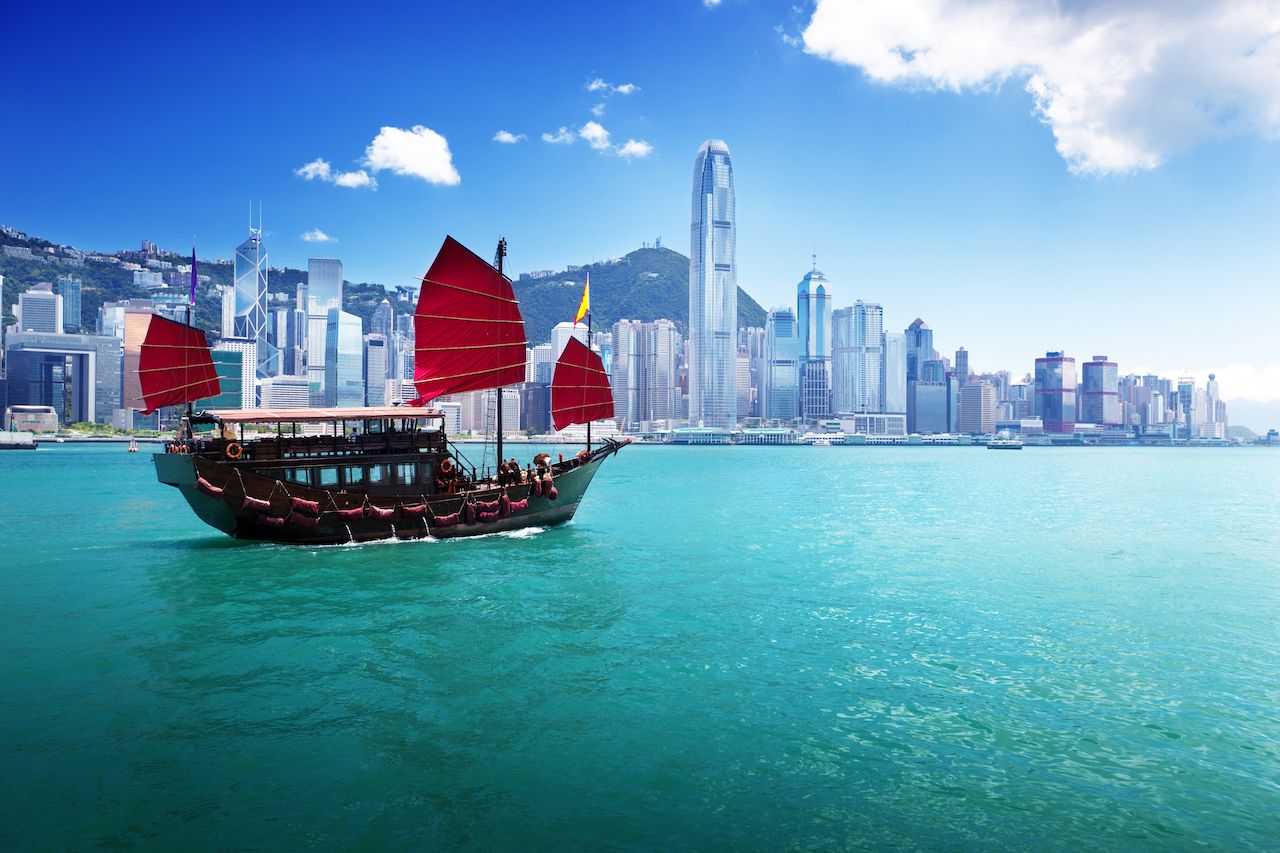 With almost 7.4 million residents packed into an area of less than 430 square miles, Hong Kong would be the fourth most densely populated country on the planet (were it actually a country, rather than a Chinese special administrative region). Before it was torn down in the 1990s, the old Hong Kong neighborhood of Kowloon Walled City — an almost physics-defying maze of interconnected towers crammed full of tiny apartments — was considered to be the most densely populated place on Earth, with more than 33,000 people squeezed into just 6.4 acres. That’s roughly 119 times as dense as New York City.

Unsurprisingly, ground burial plots are at something of a premium in Hong Kong, with the few that are available costing anywhere between $380,000 and $640,000. Of the 48,000 people who die in Hong Kong each year, 90 percent are cremated. But in a city so crowded, even a simple niche to store an urn comes with a four-year waiting list and a mind-boggling price tag. To make matters worse, to Chinese people, the idea of taking the urn home — in effect, combining the worlds of the living and the dead — has traditionally been a taboo. So in 2005, the Hong Kong government began promoting “green burials.” Families are encouraged to scatter the ashes of the deceased in one of 11 gardens of remembrance, or at sea. Three areas of sea have been designated for the scattering of human remains; a government-operated free ferry service capable of holding up to 300 people shuttles mourners to and from these dedicated spots, where the remains are cast overboard.

According to the traditions of the Igbo tribe, an ethnic group native to parts of southern Nigeria, death doesn’t represent the end of life, but instead the transition to a new world. Until a ceremony called ikwa ozu — loosely translated as “celebrating the dead” — has been performed, the deceased is believed to be unable to take their place among their ancestors. While the specifics of these ceremonies differ from one community to another, one common factor is that they take place after the body has been buried, leading to the tradition being referred to as a “second burial.” On these typically lavish occasions, which last anywhere from a few days to several weeks, the family of the deceased spends a small fortune on alcohol, livestock, and entertainment. Sometimes, a mock trial is carried out to establish who, if anyone, was responsible for the death. In a rite known as ino uno akwa, a person known as an ada eats the deceased’s favorite meals, in complete silence, from dawn to dusk to provide the deceased with food in the afterlife. These ceremonies are so expensive that the family often waits for several months after the original burial to hold them, sometimes combining the occasion with a grand memorial service.

6. Dancing with the dead in Madagascar 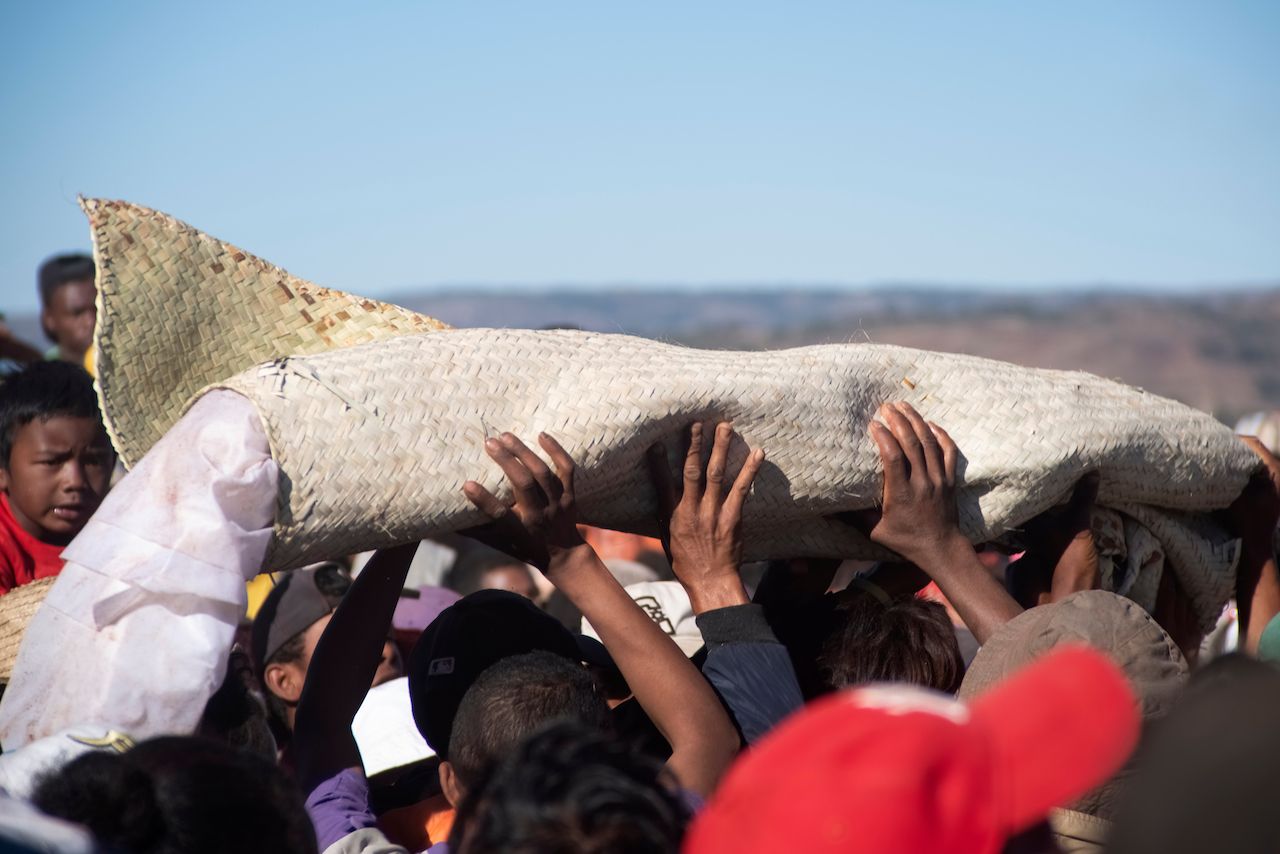 On Madagascar, the world’s second-largest island country, the dead continue to play an important part in family life even after they have been buried, thanks to a ceremony called famadihana, or “the turning of the bones.” Every five to seven years, bodies are exhumed from ancestral crypts. Family members carefully strip them of their burial garments and wrap them in fresh shrouds, after which the guests drink, talk, and dance with the departed. Just before the sun sets, the bodies are reinterred, turned upside down, and the crypt sealed for another five to seven years. The ceremony — seen as a joyous occasion — stems from the belief that the dead only move on to the next life after their bones have completely decomposed. Bodies that have never been exhumed exist in a kind of limbo; not part of the living world or that of the ancestors.

In Ga culture, the dead are believed to be much more powerful than the living, with the ability to influence their relatives, so families do all that they can to ensure the deceased will be sympathetic toward them rather than vengeful. Additionally, the dead are said to continue their living profession in the afterlife and must be buried in something that represents their job. Families commission dedicated manufacturers to create elaborate coffins (known as “fantasy coffins”) in any number of shapes and sizes, from sneakers to boats to Coca-Cola bottles. The tradition has garnered international attention, with the likes of former UN secretary general Kofi Annan and former US president Bill Clinton both reportedly visiting the workshop of internationally renowned fantasy coffin maker Paa Joe. One of Clinton’s predecessors, Jimmy Carter, is even believed to have purchased two fantasy coffins. 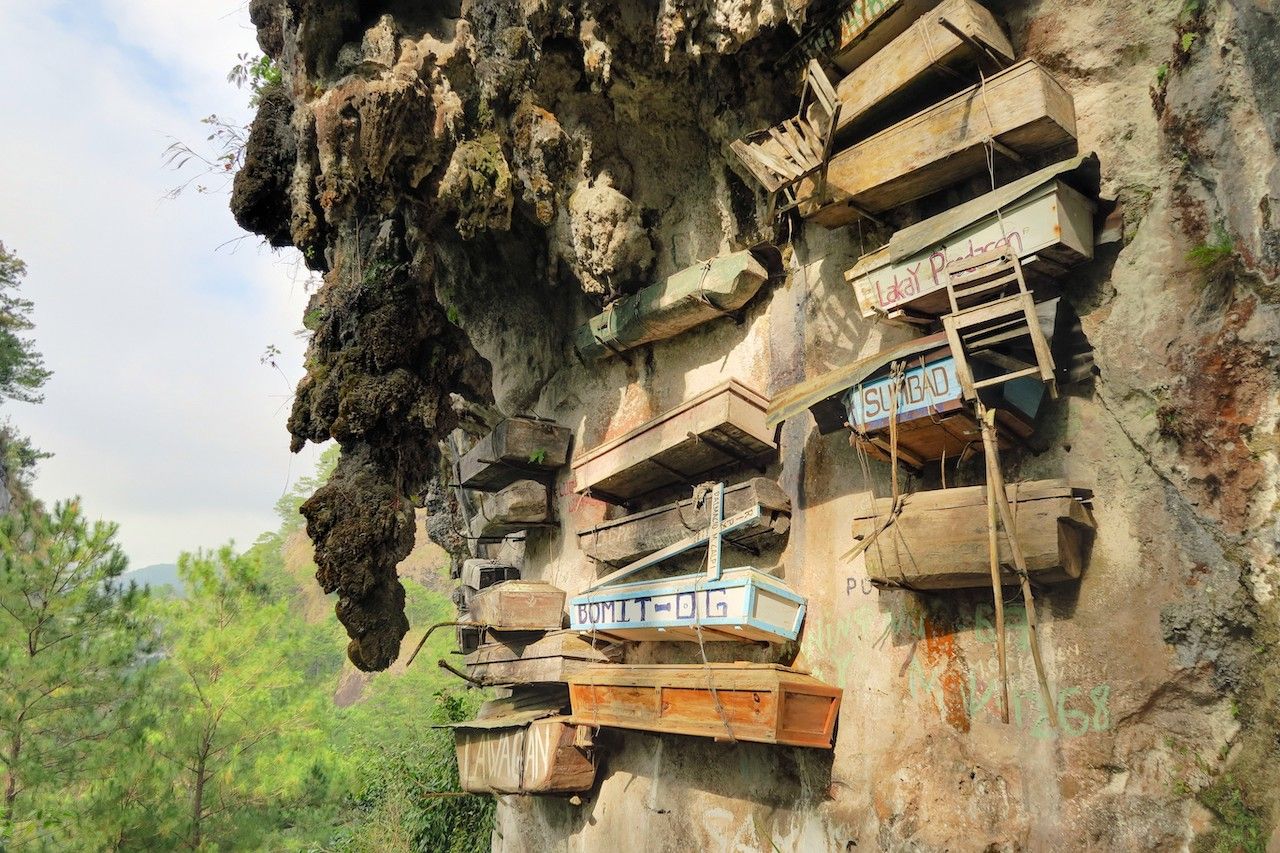 Originating from the northern provinces of the island of Luzon in the Philippines, the Igorot people practice an ancient funerary custom in which the elderly carve their own coffins, which are then tied or nailed to the side of a cliff when they die. The tradition, believed to date back 2,000 years, is said to lessen the distance between the deceased and their ancestral spirits. Before being placed in the coffin, the corpse is seated on a “death chair,” bound with leaves and vines, then covered with a blanket. The body is smoked to prevent decomposition, allowing relatives to pay their respects over several days. Before the casket is hoisted up the cliff-face to its final resting place, mourners allow fluids from the rotting body to drip over them in the belief that it will bring good luck. 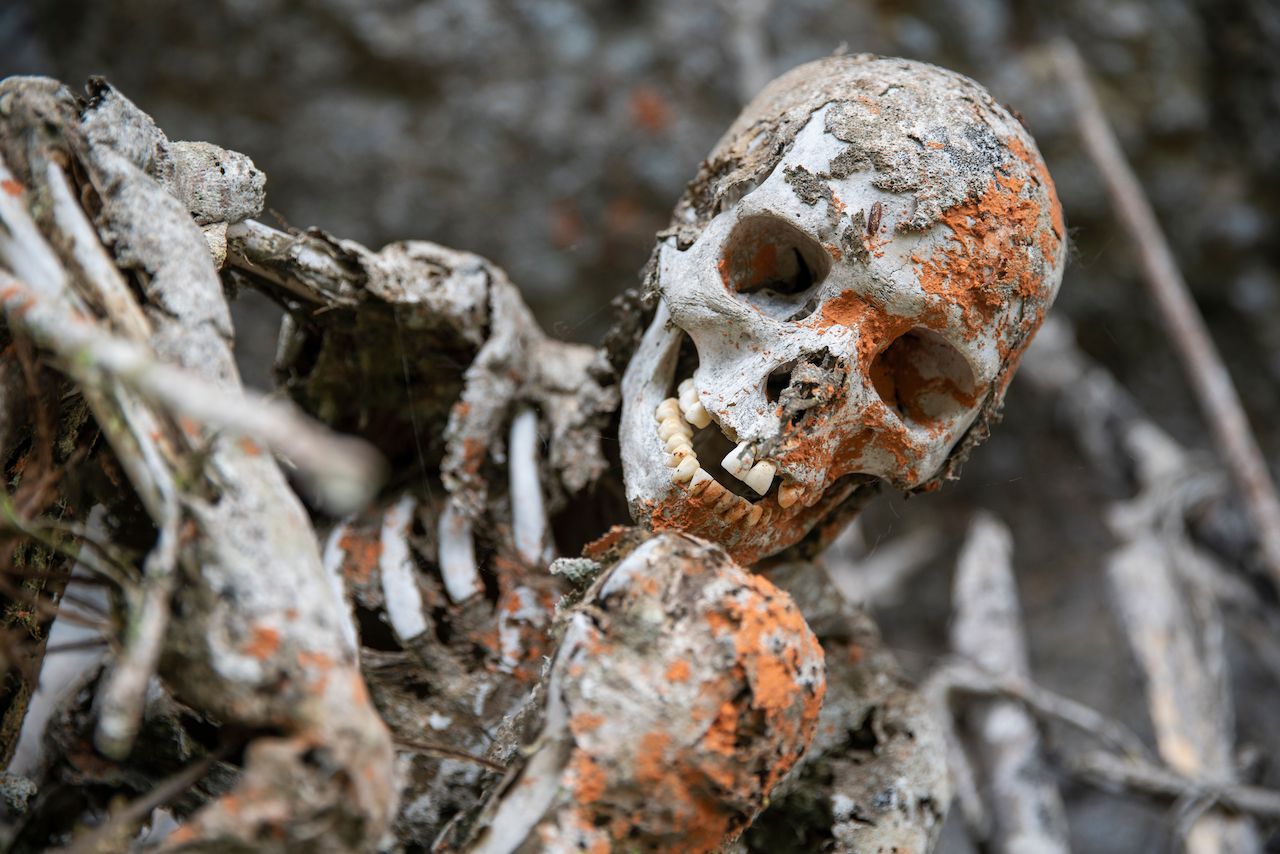 In Egypt, mummification died out between the fourth and seventh centuries AD, but the ancient tradition is alive and well among the Anga people of Papua New Guinea. By mummifying their remains, the departed can be more easily remembered than if they were buried underground, and can continue to protect their families after death. Although less prevalent now than before the arrival of Christian missionaries in the mid-20th century, mummification still happens in the remote, mountainous Morobe Province. Very different to ancient Egyptian techniques, the process involves the seated corpse being smoked over roaring flames for three months to prevent decomposition. When it bloats, the body is poked with sticks to drain the fluids. Throughout, no part of the body — including the fluids and internal organs — is allowed to touch the ground. Once the mummification is complete, the deceased is strapped to a chair and carried to a cliff-top perch, where they sit alongside their elders looking out over the village.

Art + ArchitectureThis Is the Happiest Cemetery in the World
Tagged
Religion
What did you think of this story?
Meh
Good
Awesome

May 2, 2022 Morgane Croissant
✖
travelstoke
Download the mobile app
stoked by