With more than 400,000 square feet of exhibit space, the Chicago Museum of Science Industry (MSI) is the largest science museum in the Western Hemisphere. Housed in the iconic 1893 Palace of Fine Arts structure, the museum is filled with wonders at every turn. You can browse 35,000 artifacts, view the majestic landscapes of Antarctica at Chicago’s only five-story, domed theater, climb through the hatch of a WWII submarine, and literally stand in the eye of a storm — at the Chicago Museum of Science Industry, the possibilities are endless.

With such an overwhelming range of experiences, we turned to MSI curator and historian of science and technology, Dr. Voula Saridakis for advice on how travelers can make the most out of a one-day visit to the Chicago Museum of Science Industry. 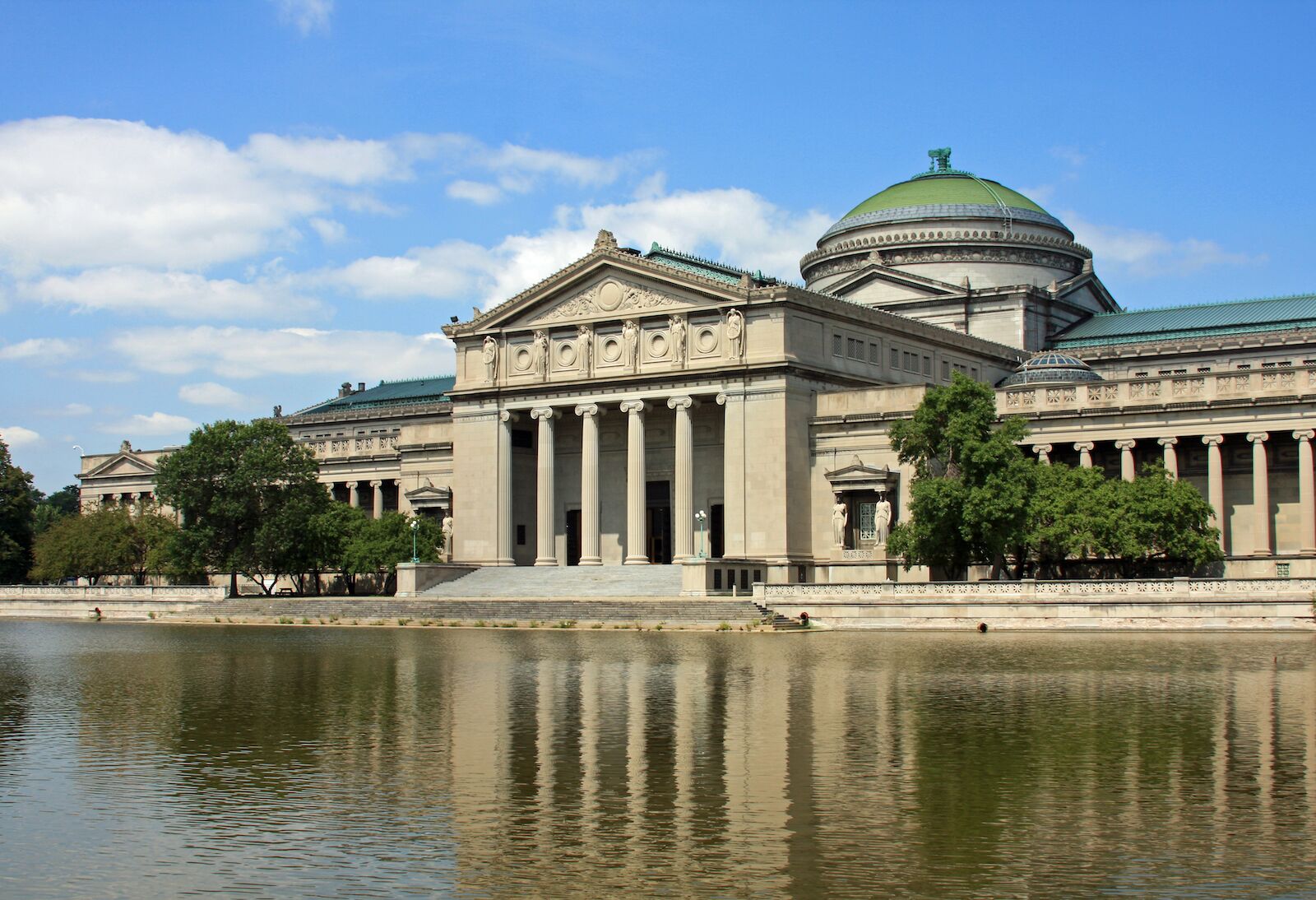 Since the museum is so large, Dr. Saridakis recommends checking out the museum’s website before your visit. “We have a half million square feet of space and it takes a minimum of two days just to casually stroll through the exhibits without really immersing yourself,” she says. “I encourage visitors to explore the website, look at the experiences, permanent exhibits, and tours, and think about what you want to see. Consider age groups and the types of science that interests you and plan the day that way.”

With such a diversity of exhibits, it’s easy to wander around the museum aimlessly and get side-tracked. Studying the website and targeting the experiences that most interest you is the best way to maximize your time. There’s even a visit planning tool that allows you to create a personalized itinerary with the time you have to spend at the MSI.

Although MSI is open daily from 9:30 AM until 4 PM, the pandemic has affected the capacity of visitors allowed at one time. Advance, timed tickets are now required to limit crowding, as well as masks and vaccinations for visitors over five years old.

Historically, spring break — March and April — and the holiday season — November and December — are the busiest times. Dr. Saridakis recommends visiting during January and February for the lightest crowds. Morning arrivals are also better because more groups arrive in the afternoon.

How to get to the Chicago Museum of Science Industry

There are several public transportation options available to get to the Chicago Museum of Science Industry directly from downtown, including with the CTA bus (#2-Hyde Park Express, and #6-Jackson Park Express) and with the Metra Electric Line trains.

If you choose to drive, note that the parking at the Chicago Museum of Science Industry is located in an underground garage and costs a whopping $22.

Even if you know which exhibits that you want to see, Dr. Saridikis suggests a handy strategy for beginning your visit. “Go up the escalator to the rotunda level, stand beneath the copper dome, and look around. You can see 360 degrees around, you’ll see some of what we have on display. We have so many nooks and crannies tucked away. Spend a few minutes at the center of it all, grab a map, and start from there.”

Five must-see exhibits at the Chicago Museum of Science Industry 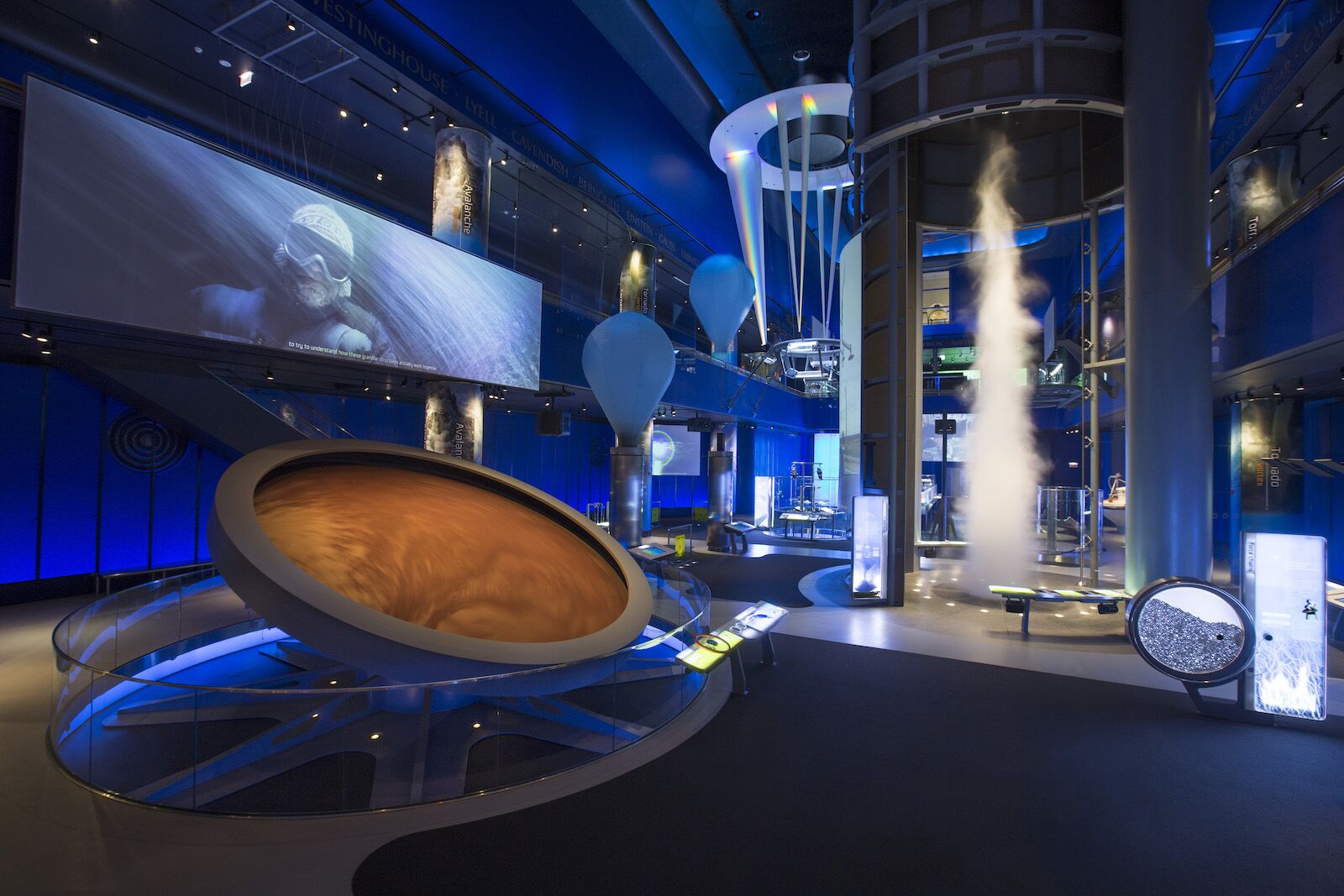 MSI is the only place where stepping into a tornado is a good idea. One of the museum’s most popular exhibits, Science Storms replicates the forces of nature so that visitors can interact with and observe the natural phenomena. You can stand in the middle of a 40-foot vortex of vapor and air and manipulate its force thanks to a control panel. You can also join storm chasers virtually as they follow severe weather patterns or walk into a wind tunnel with the wind blowing at 80 miles per hour. This immersive exhibit also allows guests to learn more about avalanches, lightning, tsunamis, fire, atoms, and sunlight. 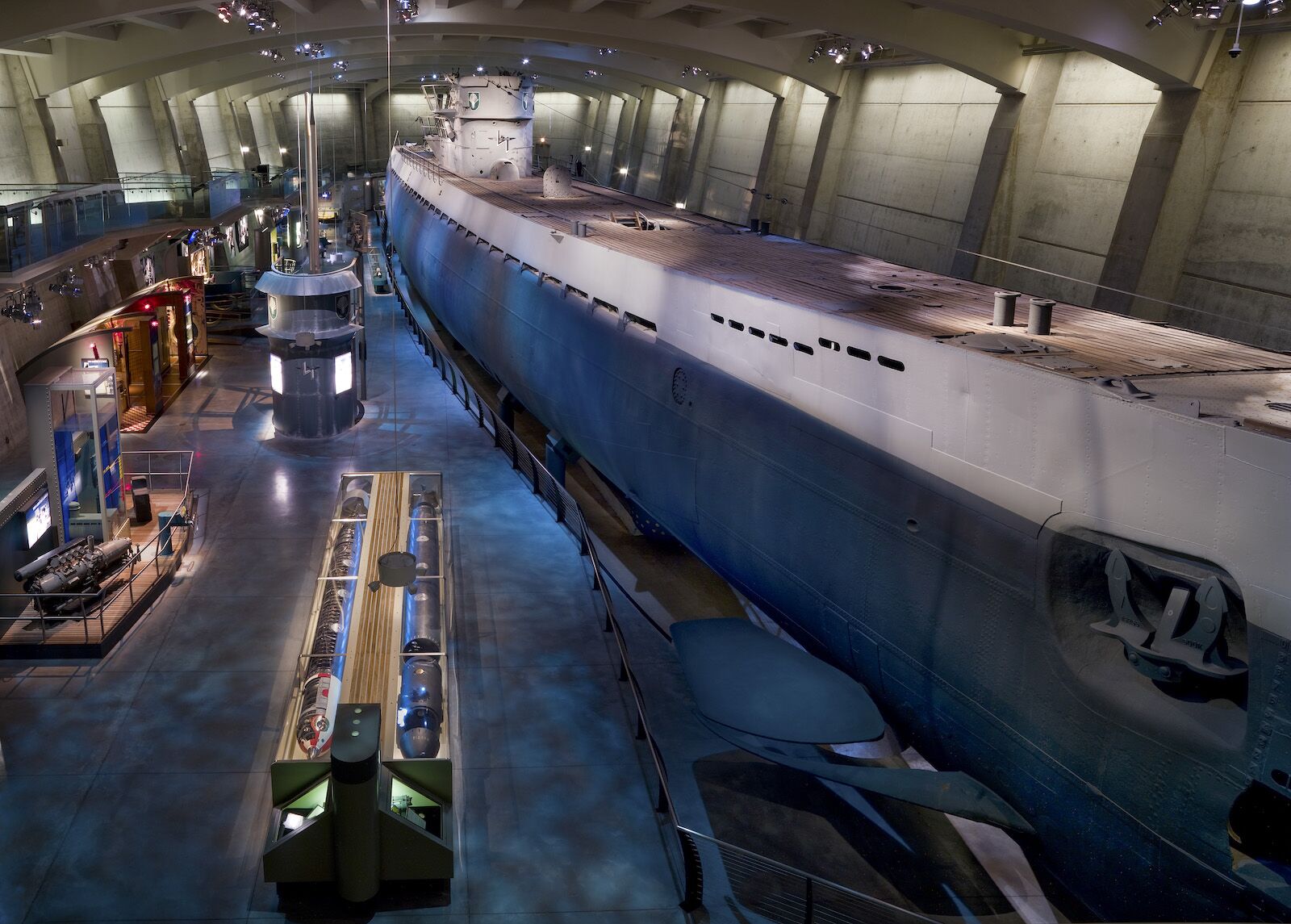 Walk through the interior of the only German submarine in the US — it spans the length of a city block! The U-505 submarine sailed through the Atlantic Ocean during WWII, hunting for American and allied ships. The riveting story of how a US Navy task force captured the German sub and tricked German forces into believing that the vessel had sunk, is just part of this exhibit’s appeal. You can also hop aboard and squeeze into the tiny galley, try out a bunk bed, and learn what life was like for the crew. Take control of the periscope, locate enemy ships, and launch torpedoes or discover the 200 artifacts on board that help make the submarine a National Historic Landmark.

Climb into an assortment of trains, planes, and ships at MSI’s Transportation Gallery. “The transportation gallery features a restored Boeing 727 plane, which is part of the 727 Take Flight exhibit. [The exhibit] explains how airplanes take people around the world, aviation history, and how the body experiences flight,” says Dr. Saridikis. Suspended from the ceiling, you can enter the 1960s Boeing 727, sit on the orange seats, see the electronic and hydraulic systems, and talk to United Airlines pilots who volunteer at the exhibit. Guests can also climb into a 999 Steam Locomotive, a barnstorming biplane, or take the helm of a life-sized ship replica. 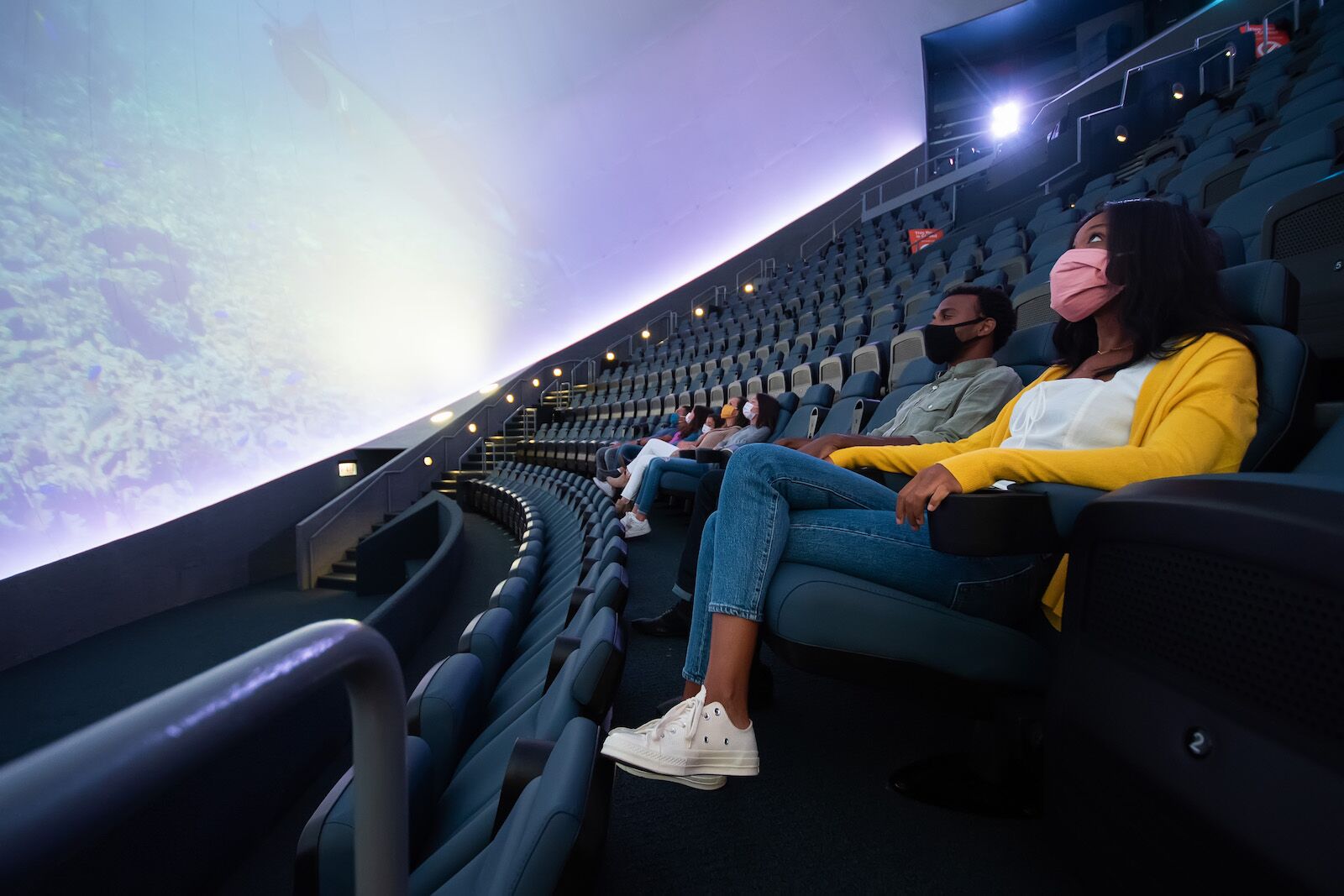 Visit the coldest, most remote place on Earth with the state-of-the-art laser projection system, one of only two in the world, at MSI’s Giant Dome Theater. Learn about the landscape and wildlife of Antarctica through never-before-seen footage. View glaciers, flocks of penguins scampering over ice, and sea lions in this thrilling presentation. Visitors can also see Dark Universe, a thrilling exploration of dark matter and dark energy. Giant Dome Theater tickets are not included with the regular museum entrance fee and require an additional timed-entry ticket.

5. Genetics and the Baby Chick Hatchery

An incubator filled with fuzzy chicks may appear to be just a high-level petting zoo but Genetics and the Baby Chick Hatchery supplies a complex and interactive lesson on DNA and genetics. Discover how genetic variations and genetic engineering create differences between humans and animals and watch baby chicks emerge from their shells. 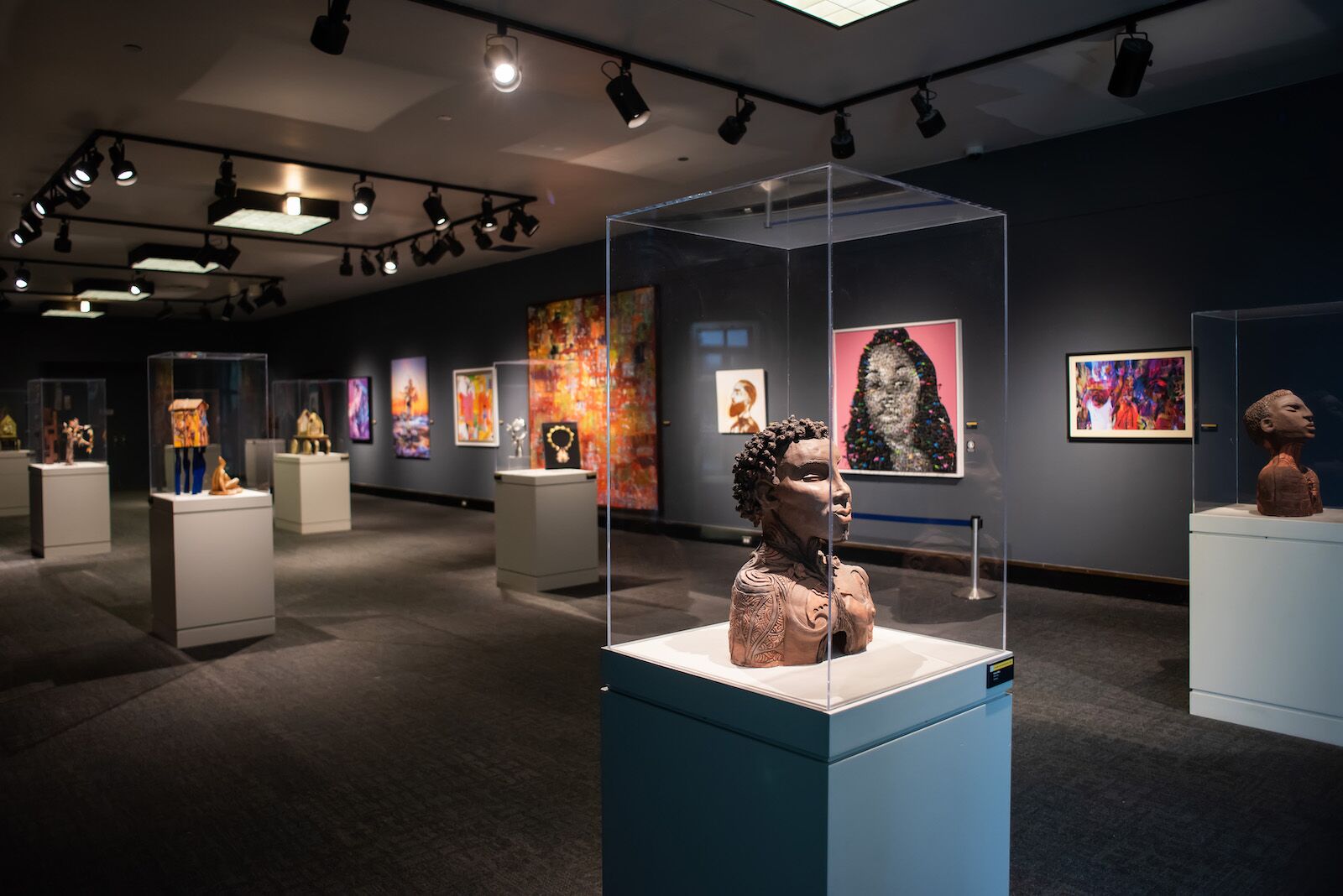 With so many fascinating experiences and displays, it’s easy to overlook the less fancy exhibits — but they hold just as much excitement.

Head to the lower level for the hidden joys of the Swiss Jolly Ball exhibit. At over seven feet high and 15 feet wide, this huge pinball machine features a large silver ball rolling through miniature Swiss ski lifts, smiling cows, and even a giant Toblerone bar. Declared the world’s largest flipper machine by Guinness World Records, the Swiss Jolly Ball puts on a lively show of movement and sound.

Make sure to carve out some time to see the 1890 “safety” bicycle that transformed cycling (located on the main level), as well as experimental model gliders designed by aviation pioneer and Wright Brother mentor, Octave Chanute (in the Transportation Gallery on the main level in the East Court).

MSI’s treasures aren’t just inside of the museum. Behind the museum just west of the entrance, the Garden of the Phoenix. Originally part of Japan’s pavilion during the 1893 World’s Columbian Exposition, the Japanese garden includes over 120 cherry blossom trees, a moon bridge, and the Skylanding permanent installation by Yoko Ono. As part of the Chicago Park District’s Jackson Park, the garden is free and open to the public.

The 7 best museums in Chicago
Tagged
Museums Chicago, IL, United States
What did you think of this story?
Meh
Good
Awesome