As soon as the sun set on Christmas Eve, Aleks, a second-year MFA student from New Jersey, sat down at the dinner table for the traditional Polish Wigilia feast with his parents and older brother. His dad, who was wheelchair-bound for most of his life, was a deacon at their local Polish church, and he created individual pray booklets for each member of the family so that they could pray together throughout the meal. Before they could eat, the family shared oplatek — a thin wafer similar to one you might eat at communion — and offered each other a message of “peace and hope for the new year.” In his family, there was no alternative to celebrating Christmas this way.

“Christmas Eve was Wigilia — to not partake in these traditions would be to not have Christmas at all,” Aleks wrote to me in an email.

Fish is the star of this meal, a custom which stems from the fact that, according to Roman Catholic tradition, observers can’t eat meat on days of fasting — though seafood is acceptable. In many Eastern European countries, this tradition is still upheld. Accordingly, the first course in Aleks’s family meal was always pickled herring in cream sauce and pumpernickel bread, followed by flounder or sole, served alongside pickled beets, latkes, and pierogi.

Aleks’s father passed away in 1998, but his mother still prepared the Wigilia feast every Christmas “as a way of keeping his memory alive,” and though Aleks has long since left home and married, he still honors his Polish heritage with a Wigilia feast of his own. No longer an observant Catholic, he makes chapbooks similar to those his father designed, except his version is filled with poetry. His wife, a professional chef, prepares red snapper, butter-poached branzino, arctic char in a chicory chili rub, or salmon in a dill chimichurri. In past years, they’ve even added crab legs and platters of shrimp to the meal.

“Wigilia is a way of feeling connected to things that can sometimes feel a little fragmented,” Aleks says. His father passed away more than two decades ago, he’s no longer on speaking terms with his brother, and he doesn’t go to church anymore. But the Wigilia feast endures. “When we sit down together at our Wigilia dinner, I feel somewhat whole again.”

In many other countries where seafood is an abundant resource, eating fish on Christmas is a beloved tradition that brings families together in celebration and reverence. It’s a way to honor their heritage, to express gratitude for the blessings of the coming year, and to practice customs passed down through many generations.

Here are nine countries that eat fish for Christmas dinner. 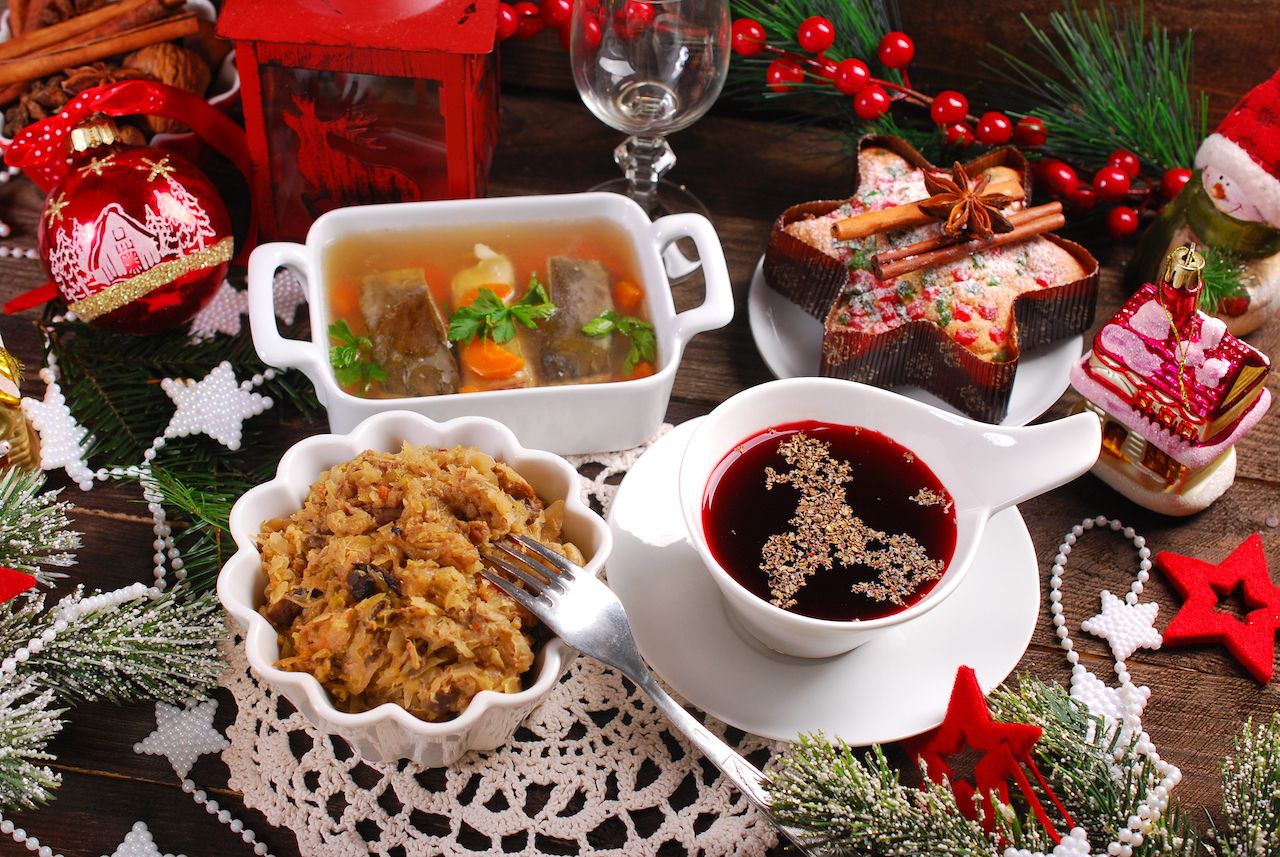 The Wigilia is a traditional Christmas Eve supper that many Polish families serve. Quite poetically, the name Wigilia is derived from the Latin word for vigil, so the meal is sometimes colloquially known as the Star Supper. Accordingly, dinner starts when the first star appears in the sky. Fish is the star of this meal, especially carp, which is thought to bring good luck. The fish is traditionally fried in breadcrumbs and then baked. Herring fillets and pickled herring rollmops are also popular choices. Twelve dishes are traditionally served over the course of the meal (one dish for each apostle in the Bible), so you’ll also find fish elsewhere on the table like in perogies and mushroom soup.

A couple of other traditions accompany the Wigilia dinner that are worth mentioning. Some families lay hay under the table as a reminder that Jesus was born in a manger. Aleks’s family placed straw on the table on which they laid a figurine of baby Jesus. Another notable custom involves setting an extra seat at the table in case there’s an unexpected guest.

“The idea is that if someone should knock on your door during the Wigilia dinner, you should invite that person to eat with you,” Aleks says. “If a fellow human being came to you on this holiest of holy days asking for your generosity, it would be especially wrong to refuse them.” 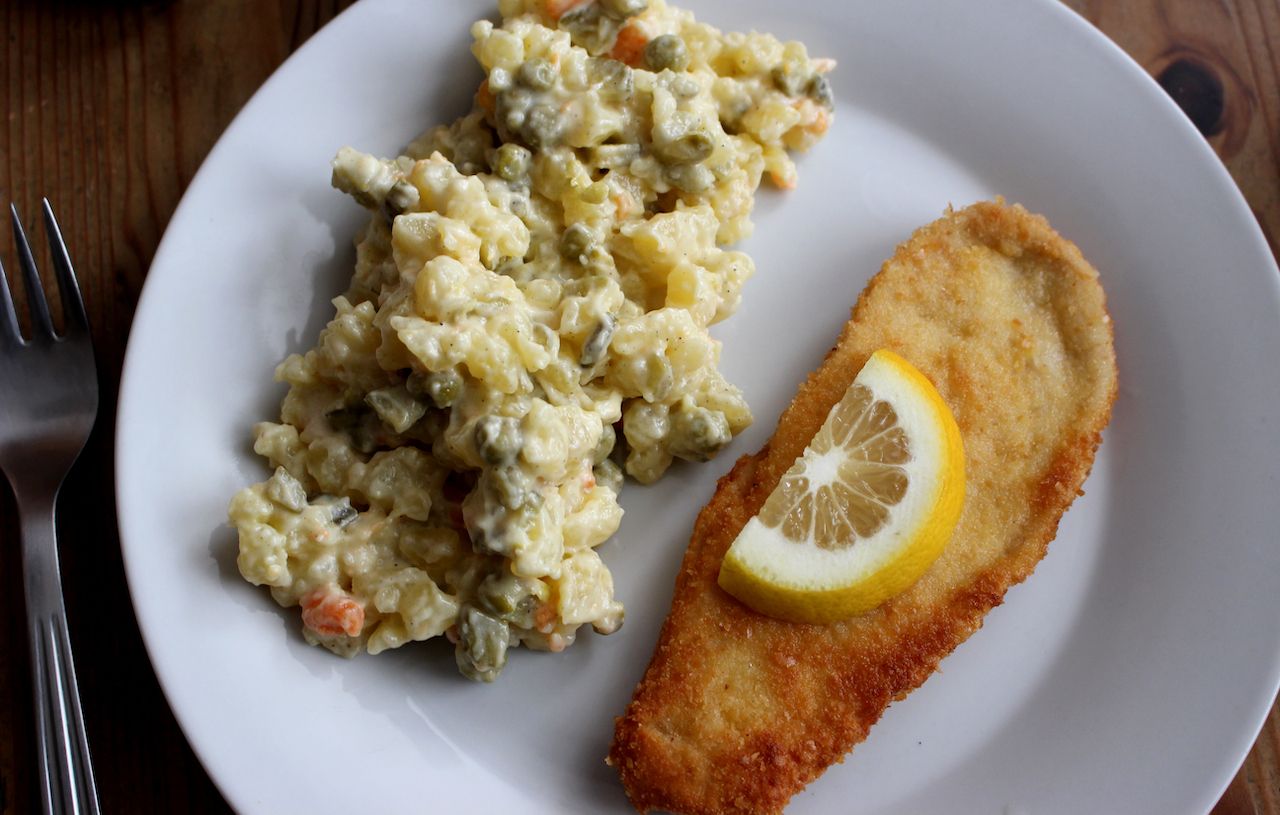 In the Czech Republic, Christmas Eve is known as Generous Day, an event filled with cooking, feasting, and celebration. Soup plays an important role in the festivities: Those who are able to subsist on fish and cabbage soup during the day might be rewarded with a vision of the golden pig in the evening — a sign of prosperity for the year to come.

At dinner, fried carp is the main course (a common theme among many of the countries on this list), served with potato salad. One perhaps now antiquated custom is to place fish scales under the plates, as it’s thought to bring wealth to the household. 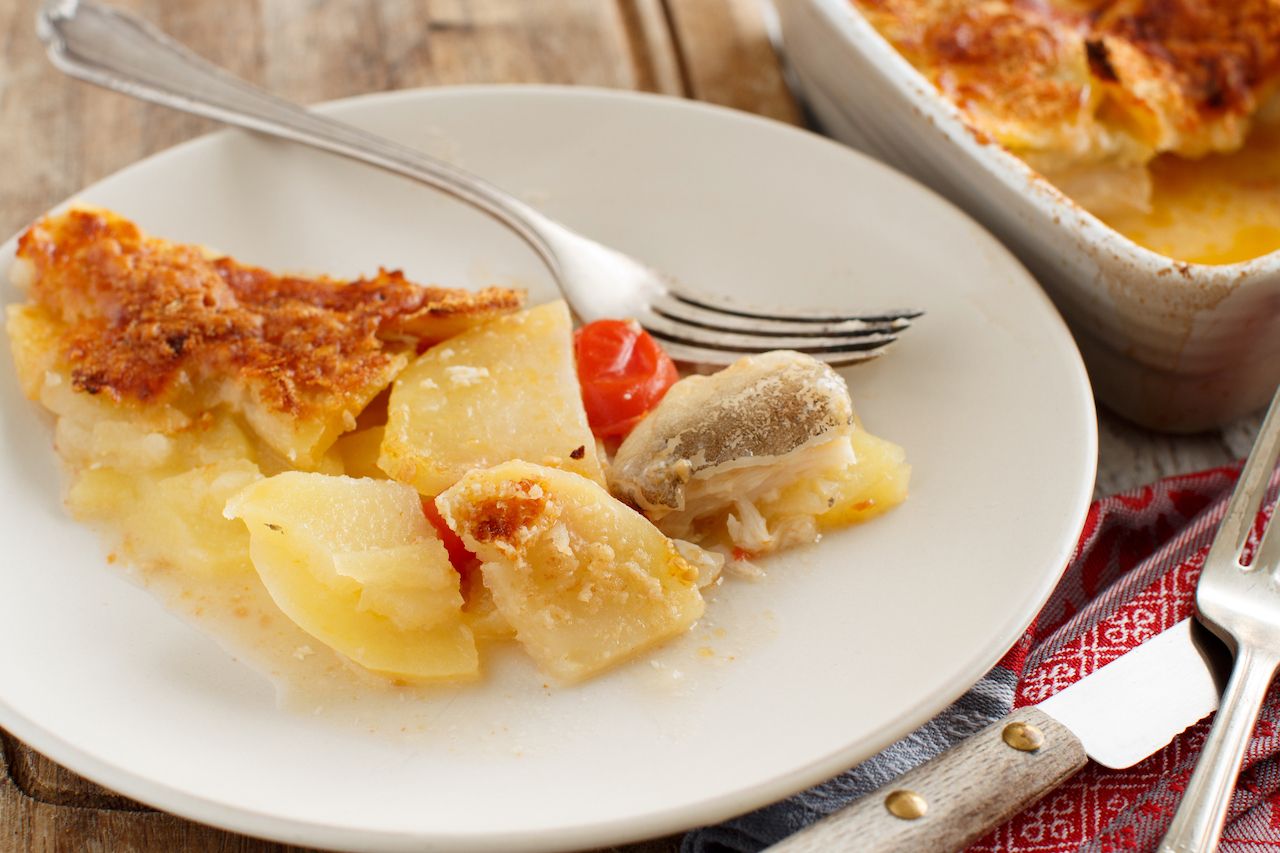 Badnji Dan (Christmas Eve Day) and Badnja Večer (Christmas Eve Night) are the major celebrations during the Croatian holiday season; the names are derived from Slavic word badar, meaning to stay awake, a reference to the fact that some families like to stay awake all night partying before greeting Christmas Day.

Croatians fast during the day on Christmas Eve and then enjoy a meal in the evening. Dried and salted cod, called bakalar, is the main dish. The cod is soaked for two days to remove the excess salt before cooking, then prepared as a stew with potatoes, parsley, and garlic. 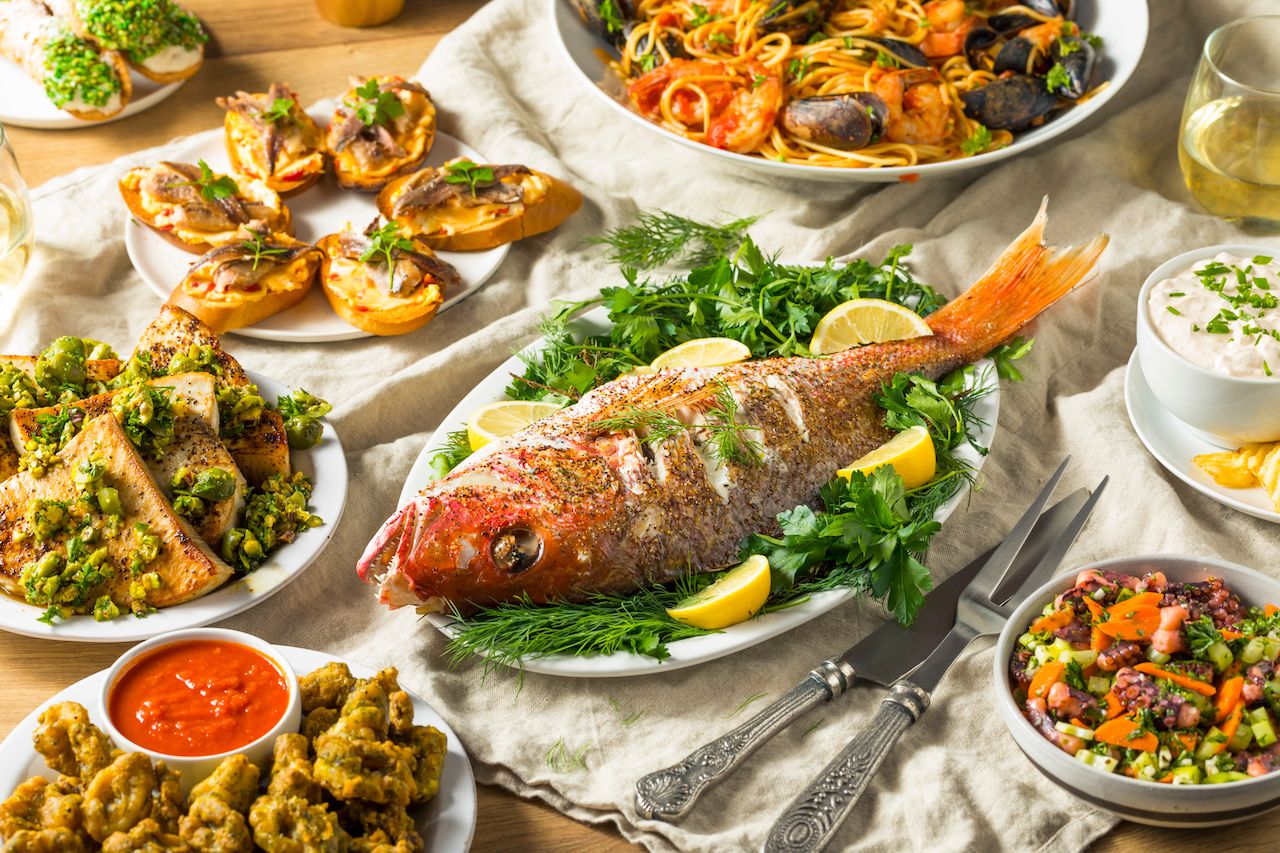 Though the Feast of the Seven Fishes is an Italian-American tradition celebration in the United States, this sumptuous meal has its roots in Italy, where this seafood-heavy dinner is known as la cena della vigilia — the midnight vigil awaiting the birth of Christ.

Food writer Mark Cirillo explains that the fish dishes served at this meal vary depending on the region: In Rome, for example, arzilla fish soup is a popular choice, while cod fritters are more commonplace in Naples. Seafood of all kinds, not just fish, is also served, including clams and calamari.

One of the most illustrative stories that shows just how important it is to carry on traditions from the old country in America comes from the book Italian Family Christmas by Molly Totoro. When she and her Italian husband moved to Kansas City from Connecticut in 1990, they left behind a close family friend named Cora, who hailed from Cassano Irpino, near Naples. Determined to carry on the traditional la cena della vigilia usually hosted by Cora, Totoro searched her new hometown for baccala, the salted cod served as the dinner’s main course. Unable to track down a suitable fish (tilapia was the closest option but not good enough), Totoro was devastated. Then, Cora, back home in Bridgeport, came to the rescue. She went to her local Italian grocer, picked up a whole frozen fish in butcher paper and plastic wrap, and mailed it to Totoro in Kansas City so that she could honor her family’s heritage at the Christmas dinner table for another year. 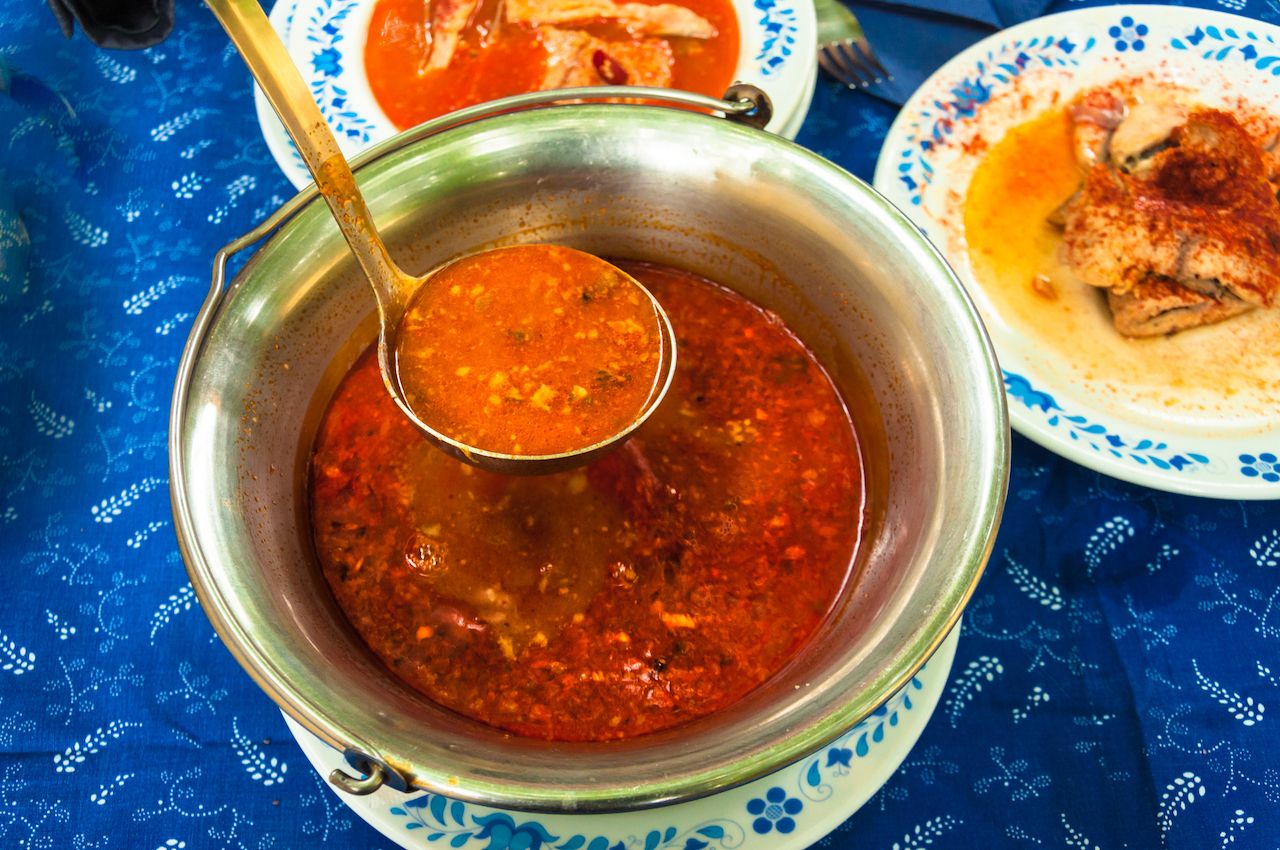 On Christmas Eve, known as Szent-este or Holy Evening, Hungarians eat halászlé, a spicy “fisherman’s stew” made with some combination of carp, catfish, and fogas (perch). The key ingredient is paprika, which lends this soup its rich red color and signature kick. As in Poland, carp is considered good luck in Hungary. Halászlé is often served with stuffed cabbage and a poppy seed roll called beigli. After dinner, some families attend Midnight Mass. 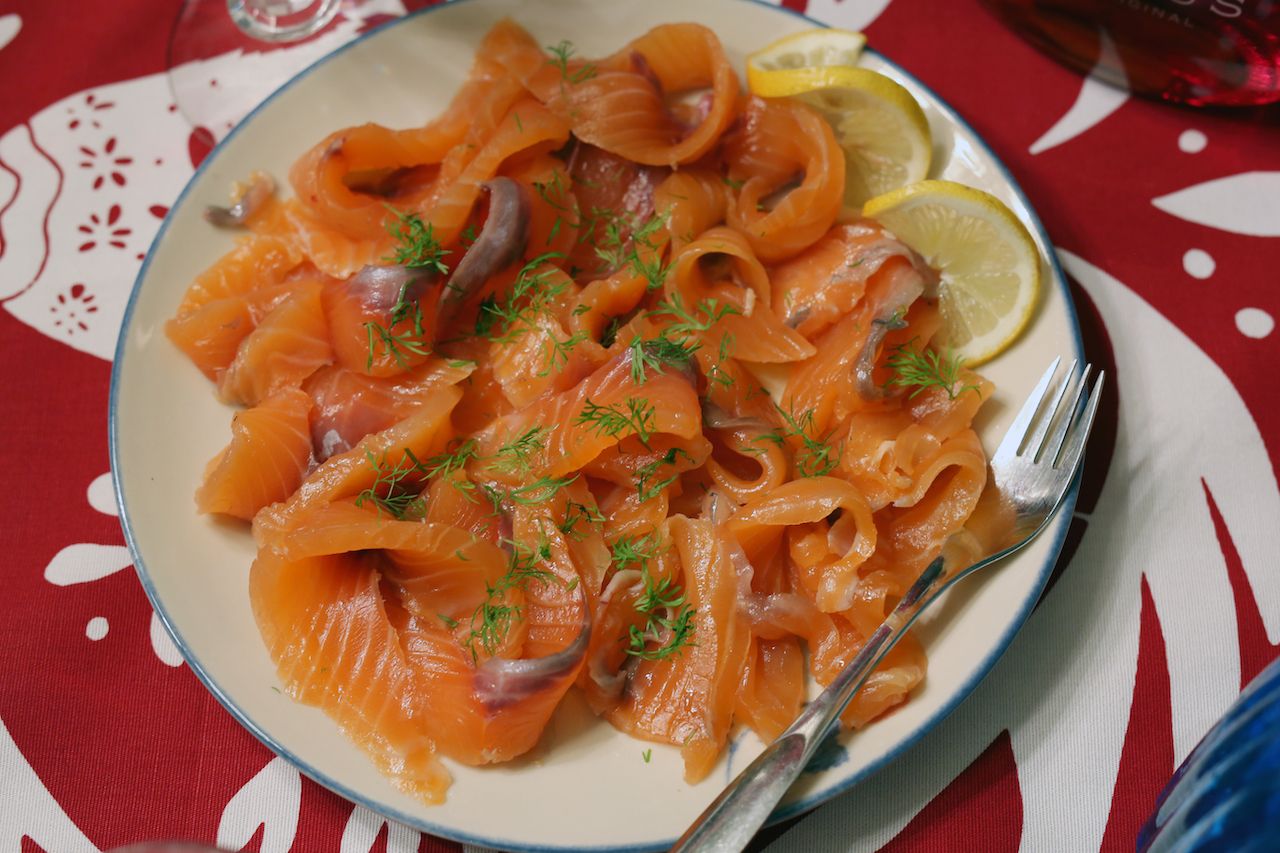 Baked ham, rutabaga casserole, and beet salad are usually the centerpiece of the Christmas dinner, called the Joulupöytä or the Yule Table in Finland. However, the meal often begins with a spread of fish-centric cold cuts, including smoked salmon and gravlax, lutefisk, fish roe, and pickled herring, all served with a side of boiled potatoes. 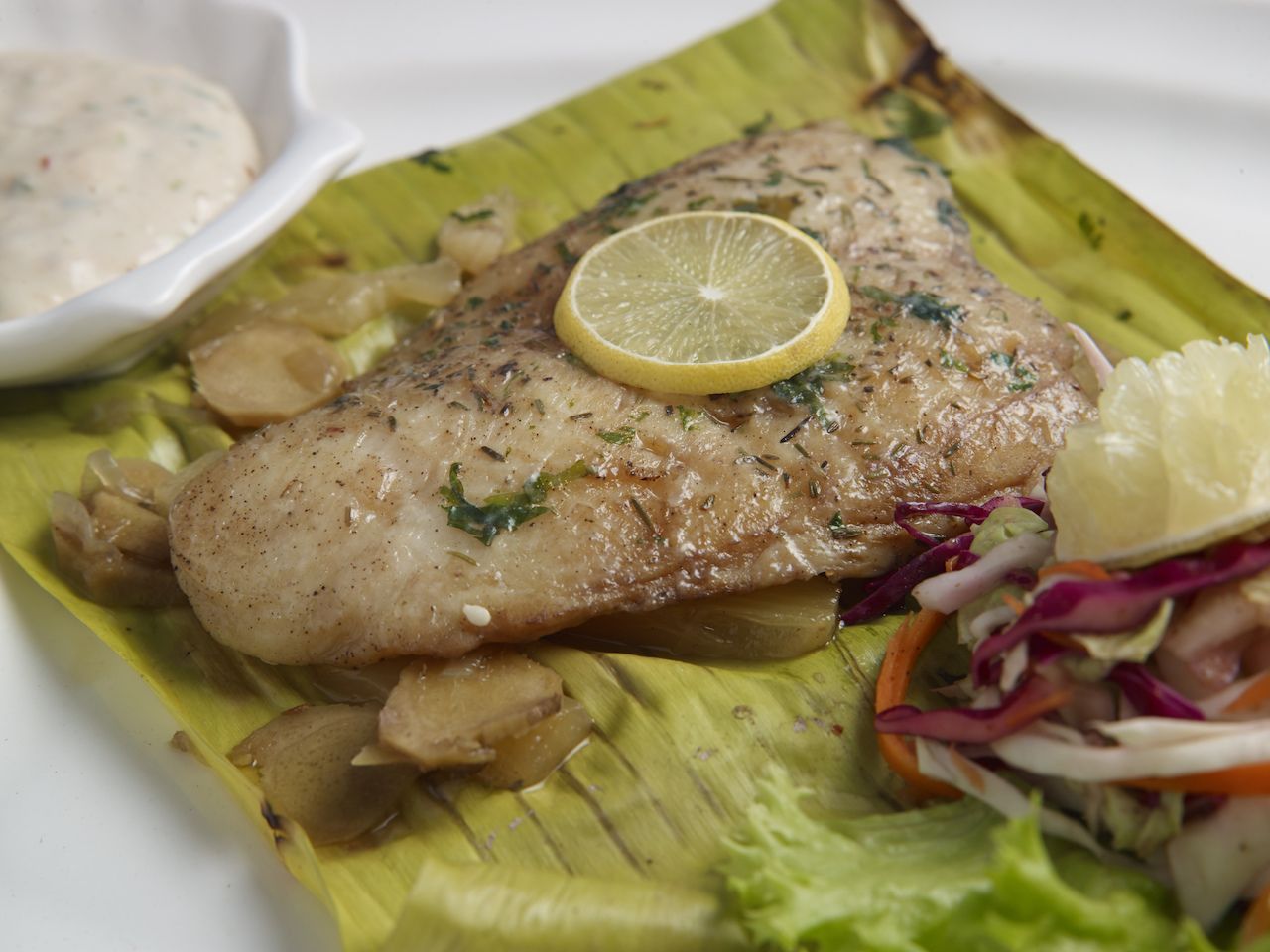 Here’s one country where Catholic traditions have nothing to do with the Christmas seafood feast. In Fiji, Christmas is celebrated with a lovo feast consisting of chicken seasoned with garlic, cassava, dalo root (also known as taro), pork, and, of course, fish (which might include mahi-mahi, tuna, and other seafood like octopus) — all marinated in tropical flavors like lime, ginger, and coconut cream. The lovo is a pit dug into the ground, into which stones are piled and a fire lit to heat the stones. Once the meat and fish are added to the pot, it’s covered with coconut stalks, large leaves, and damp fabric, then buried under a layer of soil until the food is cooked. To some people the flavor might be reminiscent of a smoky barbecue. 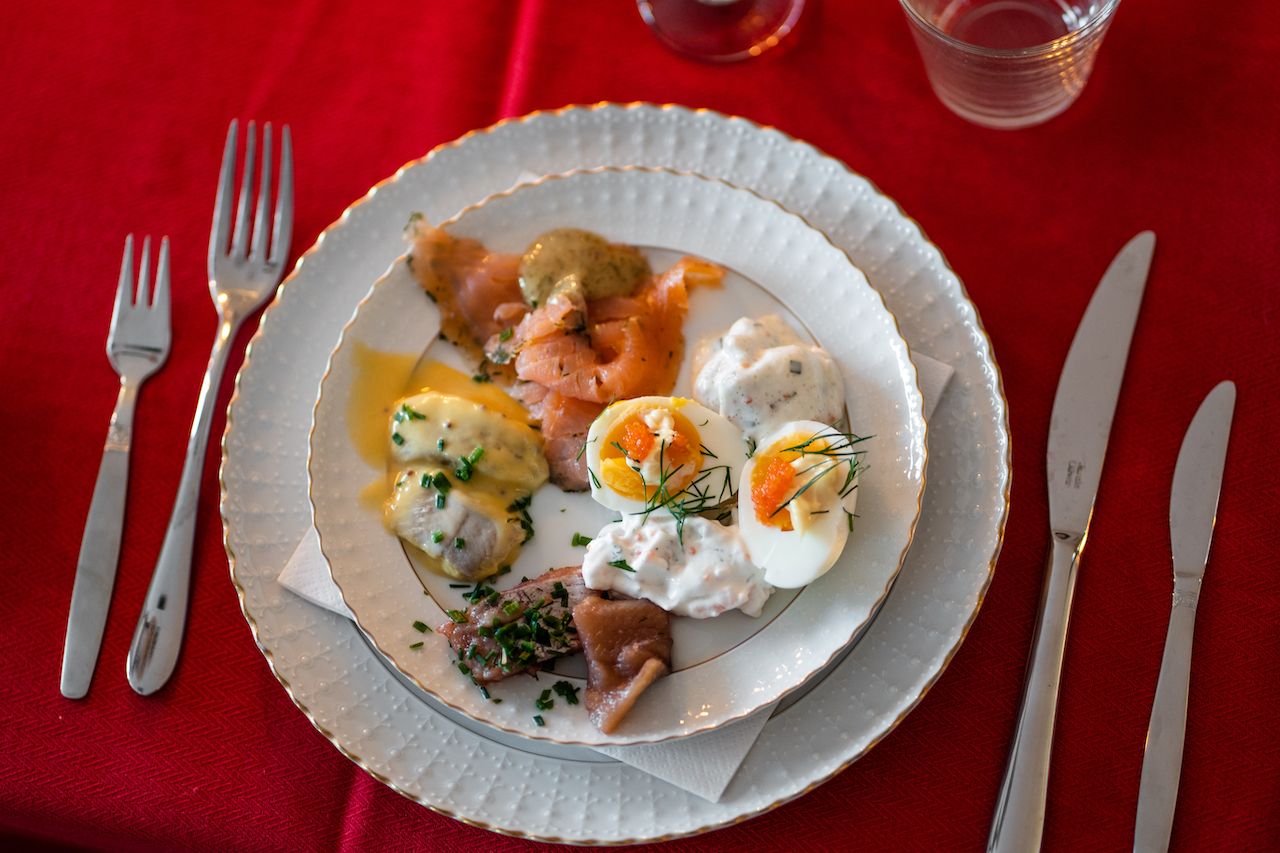 Christmas dinner is called Julbord in Sweden. The meal starts with cold fish and meats before moving on to hot dishes. There’s an abundance of herring at the dinner table, served both pickled and in herring salad. As in Finland, you might also encounter lutfisk. Small bites, like hard-boiled eggs topped with a scoop of fish roe, get guests excited about the meal to come. Salmon, whether it’s cured or smoked, is another popular appetizer, sometimes served on toast and topped with dill or mustard. One classic side dish is called gubbröra, a mixture of chopped hard-boiled eggs and anchovies. 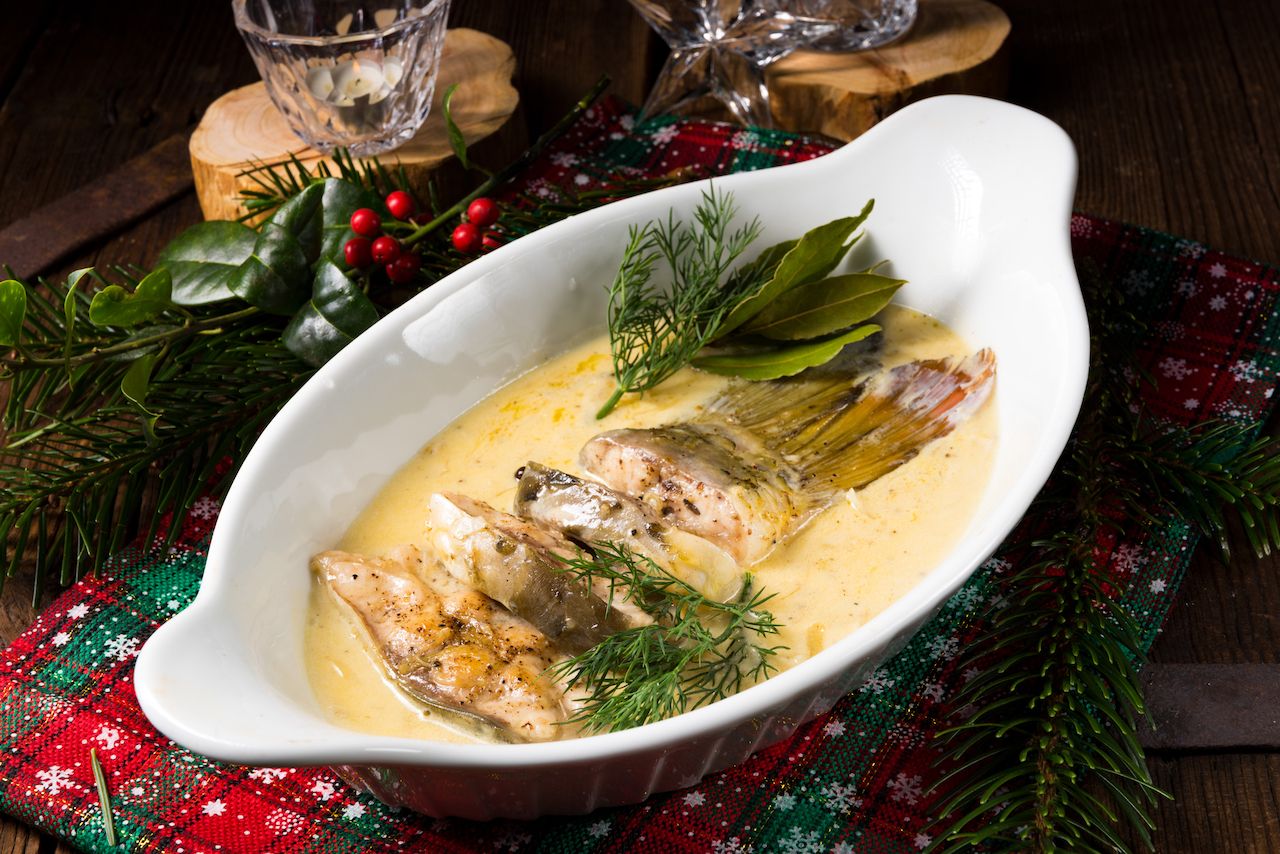 Some Catholic Germans prepare a light, meatless dinner on Christmas Eve. Red herring salad — a mix of pickled cucumbers, beets, and apples — is a classic side dish. The weihnachtskarpfen (Christmas carp) is prepared in a variety of ways. Blue carp, so named because hot vinegar is poured over the fish until it takes on a blueish tint, is simmered in a herbaceous broth until cooked through and served with a side of horseradish sauce. It can also be breaded and fried and served with potato salad. Salmon or even hake (a member of the cod family) might also be served with sauerkraut.

In Germany, fish scales are sometimes carried in the wallet as a charm to attract wealth, based on the superstition that the scales resemble coins. Another old custom calls for burying the fish bones under a tree on Christmas so that it bears fruit in the coming year.

What Christmas dinner looks like around the world
Tagged
Food + Drink Holidays
What did you think of this story?
Meh
Good
Awesome