Green tea is connected to Japan in more ways than its cuisine: The beverage has its roots in the nation’s history, spiritual practices, art, and architecture. One gateway into understanding the importance of green tea in the country is to experience a traditional tea ceremony, which is a centuries old practice that emphasizes a strict set of guidelines and an elegant choreography all centered around preparing, pouring, and drinking matcha.

The Japanese word for tea is cha, while the tea ceremony is known as chanoyu (“hot water for tea”) or chado (“the way of tea”). According to historian Anna Willman, the highly stylized tea ceremony first emerged in 16th century Japan and was originally performed in the realm of aristocrats, from royalty to merchants to high-ranking military figures, as a way to facilitate political and social interactions.

The tea master Sen no Rikyū is likely responsible for shaping the tea ceremony as it is practiced in Japan today. He introduced the guiding principles behind the ceremony known as wabi-sabi. An organization called Wabi-Sabi Japan, which aims to educate tourists on how these principles fit into Japanese culture, defines the term as a celebration of “rustic elegance, quiet taste, refined beauty and the belief that objects gain value through use and age.”

By the 17th century, the tea ceremony had become entrenched in Japan, and by then had come to represent four essential ideals meant to guide Japanese life: wa (harmony), kei (respect), sei (purity), and jaku (tranquility).

“The Japanese tea ceremony can be said to cater to the five senses: beautiful surroundings, the fresh scent of matcha, warmth from the tea bowl, the smooth taste of the tea, and the joyful moment of connection to an event that has been performed regularly for many hundreds of years,” explains Mori Atsuko, the director of Camellia Tea Ceremony in Kyoto, a venue which offers private and group tea ceremonies to tourists in English. In the past several years, she says that organizations like hers have popped up across Japan to offer traditional tea ceremony experiences to tourists.

The tea ceremony is an ancient tradition that embodies the spiritual and artistic principles that guide Japanese culture. The practice is — while not entirely common — still flourishing in some corners of Japan. Visitors to the country sometimes have the opportunity to experience a less formal version of the tea ceremony, and it’s even possible to hold one yourself.

“The tea ceremony is still very much alive in modern Japan, perhaps more than it has been in a long time,” Atsuko says. “To become a master of tea ceremony takes more than 10 years of training, but it is not necessary to be a master to host your own tea ceremony.”

From the arrangement and decorations of the tea room to the proper equipment, the tea ceremony is a complex ritual that takes focus and precision. Here’s what you need to know before conducting your own tea ceremony. 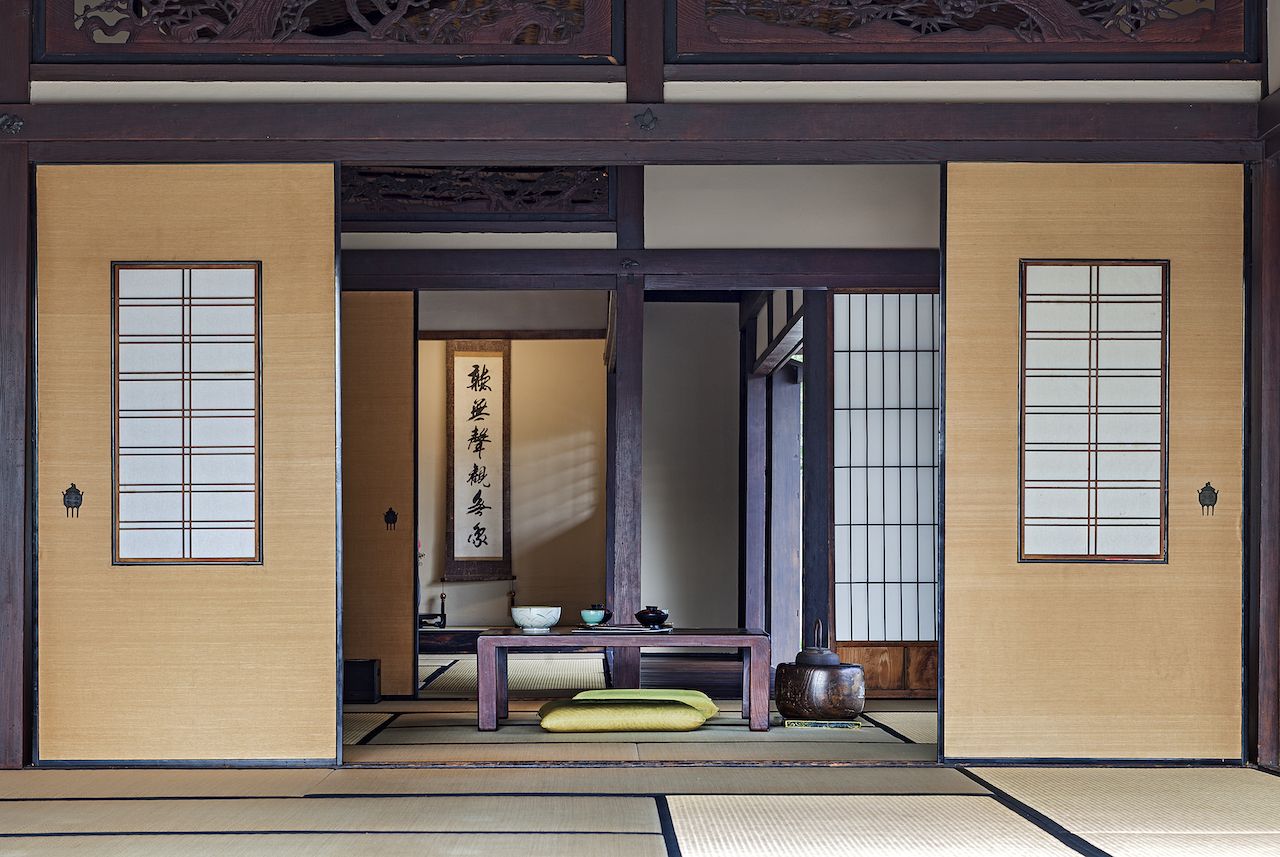 The tea ceremony begins in the chashitsu (tea room). Willman wrote for the Metropolitan Museum of Art that the tea room was originally “modeled on hermit’s hut” and surrounded by a garden. It was designed to focus on the interaction between guests, which was usually around four or five people, the tools used to prepare the tea, and the host, known as the teishu. One important aspect of the tea ceremony is appreciating the space itself.

Before entering the tea room, guests are usually asked to remove their shoes and to wash their hands in a stone basin called a chozubachi.

The chashitsu has a few distinctive features to keep in mind, even if you can’t implement them yourself for an at-home tea ceremony. First, the door inside is short enough that it requires stooping to enter the room, which signifies that in the realm of the tea ceremony, all guests are equal. The room will always display ikebana, traditional flower arrangements, and a jiku, a silk scroll decorated with calligraphy.

The tools and tea 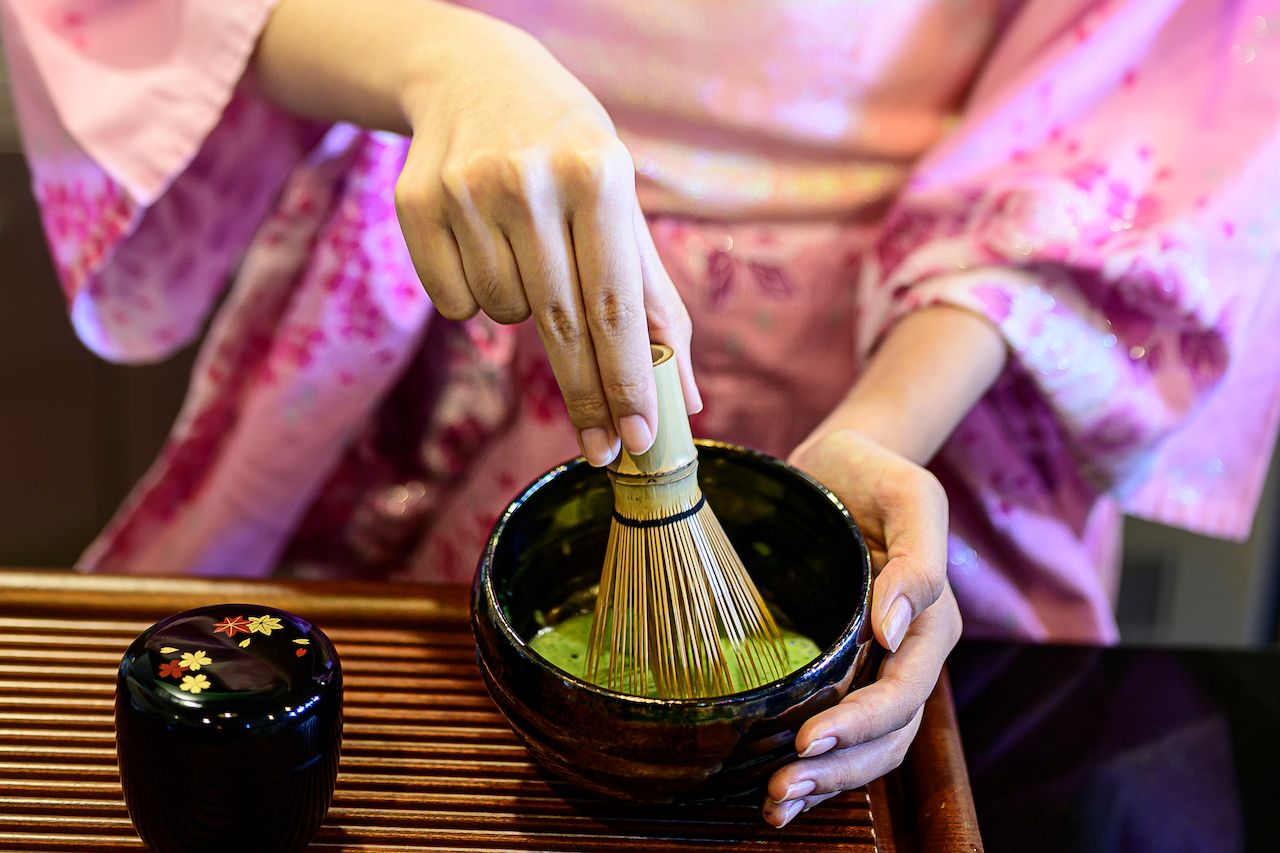 A well-executed tea ceremony requires a specific set of tools called dōgu. Masters of the tea ceremony spend a lifetime collecting a customized set of these tools that reflects their own aesthetic, but in general if you have a set of ceramic cups and a whisk, you can conduct a basic tea ceremony. However, if you want to elevate your tea ceremony to an expert level, there are a few tools you might want to make sure you have on hand. The first, and perhaps most important, aspect of the ceremony to consider is the tea.

“Traditional tea ceremony focuses solely on matcha,” Atsuko says. “There are actually two types of matcha: one is called koi-cha (thick-tea) and the other is usu-cha (light-tea). Generally speaking, koi-cha is for formal tea ceremonies, and usu-cha is for casual ones, though both can be used for longer ceremonies.”

Next, turn your attention to the essential equipment. Most tea ceremonies need a kama (kettle), which is used only to heat the water, not to hold tea; a chakin (tea cloth) used to clean equipment like the bowls, ladle, and whisk; a chaire or natsume (tea caddy) used to house thick or light tea respectively; a chasen (bamboo tea whisk); a chasaku (tea scoop); and finally the chawan (tea bowls), which come in different designs, shapes, and sizes, but generally reflect the personal taste of the host. 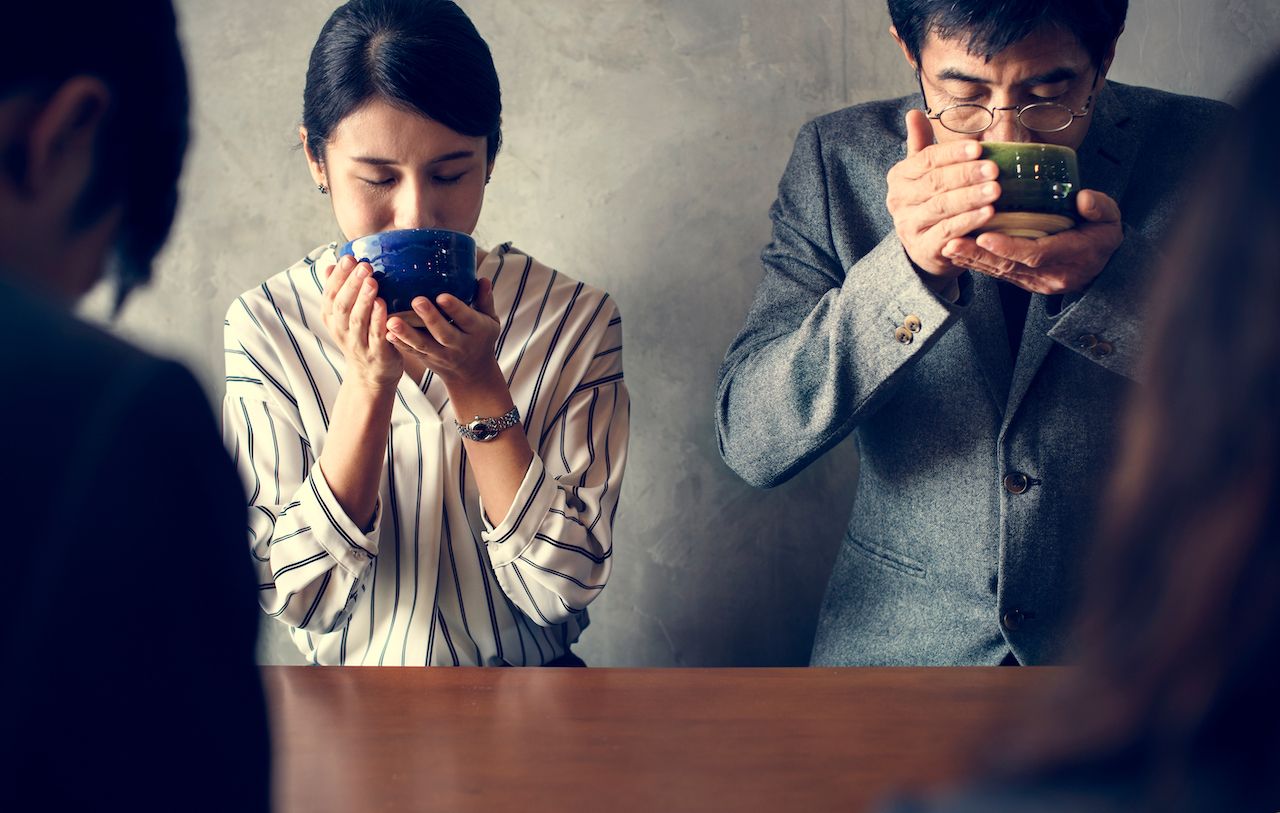 Traditionally, tea ceremonies are private, invite-only events. Atsuko says that temples and shrines will sometimes host abbreviated tea ceremonies that are open to the public, but the purpose of these events is “to introduce people to the tea ceremony.”

“The intimacy, intricacy, and peace of a more authentic tea ceremony is often lost,” she adds.

Tea ceremonies don’t always have to be formal affairs, and can be attended by co-workers or friends. Atsuko says that the main purpose of the ceremony is to “form bonds, or simply to enjoy a particular season,” so that should be your focus. Nevertheless, it is important to follow the proper etiquette when preparing and serving the tea.

According to historian Mark Cartwright, the movements of the host should be “precise, graceful, and restrained.” While preparing the tea, the host should be silent, first cleaning the tea caddy that holds the powdered tea and bamboo ladle with the chakin. Water heated in the kama is poured in the cups, the ladle is used to add a scoop of matcha to the cups. Two components are then mixed together using the bamboo whisk.

While the tea is being prepared, the host might offer a small selection of sweet treats, which cut the bitterness of the tea; these should be eaten immediately. However, guests of the tea ceremony should be sure to not eat or drink anything that is not offered; it would be impolite to demand food or to sip the tea before it has been prepared. Once the tea is served it should be sipped slowly, not gulped down. Conversation usually revolves around the beauty of the equipment or the flavor or origins of the matcha, but it’s up to the host to decide how strictly to uphold those guidelines.

“It is easy to look for deeper meaning behind the tea ceremony,” Atsuko says, “but for guests it is very much about the here and now, enjoying the tea and sweets surrounded by beautiful things.”

Coffee + TeaThe 5 Major Tea Regions of Asia You Need To Know About
Tagged
Coffee + Tea Culture Japan
What did you think of this story?
Meh
Good
Awesome