In a country that doesn’t have the most shining culinary reputation, the full English breakfast stands out. The contents of the English breakfast platter is a laundry list of decadent, nourishing ingredients and hearty food that becomes fuel for your day: salty, greasy sausage and bacon; toast; a couple spoonfuls of beans and mushrooms; sliced tomatoes and blood sausage; and a shiny pair of sunny-side-up eggs.

Affectionately known as a fry-up in England, the English breakfast is what food writer Ellen Castelow called a “national institution” in a story for Historic UK — one that’s intertwined with the country’s political and economic history. To understand how the English breakfast became so entrenched in English society, you have to travel back to the 13th century and the rise of a social class called the gentry. These country-dwelling aristocrats considered themselves the cultural inheritors of Anglo-Saxons — the group of Germanic people who, up until the Norman Conquest in 1066 when the French essentially took over, ruled the British Isles.

This might all sound like dense and unnecessary history, but it’s actually quite important because the gentry considered themselves the stewards of original English culture. Their embrace of the English breakfast signaled that it was an essential element of an authentic English lifestyle. At their grand houses in the country, the gentry ate a full English breakfast before hunting, and proudly offered the hearty meal to guests who traveled long distances to visit — a tradition that extended to both the Georgian and Victorian eras.

By the time the Victorian era arrived, the gentry had been replaced by a new class of wealthy merchants, industrialists, and businessmen — England’s aristocracy. According to the English Breakfast Society, which is based in Hertford, England, the Victorians elevated the English breakfast to an “art form,” organizing “elegant and refined” social events centered on breakfast that “demonstrate your wealth, good taste and social upbringing.”

You’ll find a few different variations of the English breakfast. The full Irish breakfast, for instance, includes all the same elements of the English equivalent but it’s typically served with Irish soda bread, boxty (an Irish potato pancake), or bubble and squeak — the fanciful term for hash of fried bits of bacon or sausage and cabbage, so named for the term it makes as it’s cooked over a fire.

In Scotland, a full breakfast sometimes includes haggis and Lorne sausage — a type of breakfast meat that has no sausage casing, but is rather formed into a block and served in squares or a tattie scone, otherwise known as a potato scone. In both Ireland and Scotland, it’s also common to find black or white pudding (sausage made with pork blood, pork fat or suet, and oatmeal; the latter contains no blood).

However, the standard elements of the English breakfast have remained consistent and the methods and flavors of their preparation mostly unchanged. Remember, the key to English breakfast is that (nearly) each element is fried (hence the nickname “fry up”) so if you’re skipping a step and not cooking the ingredients in the same frying pan or skillet, you’re missing the point. Here are the main ingredients you’ll encounter in a full English breakfast. 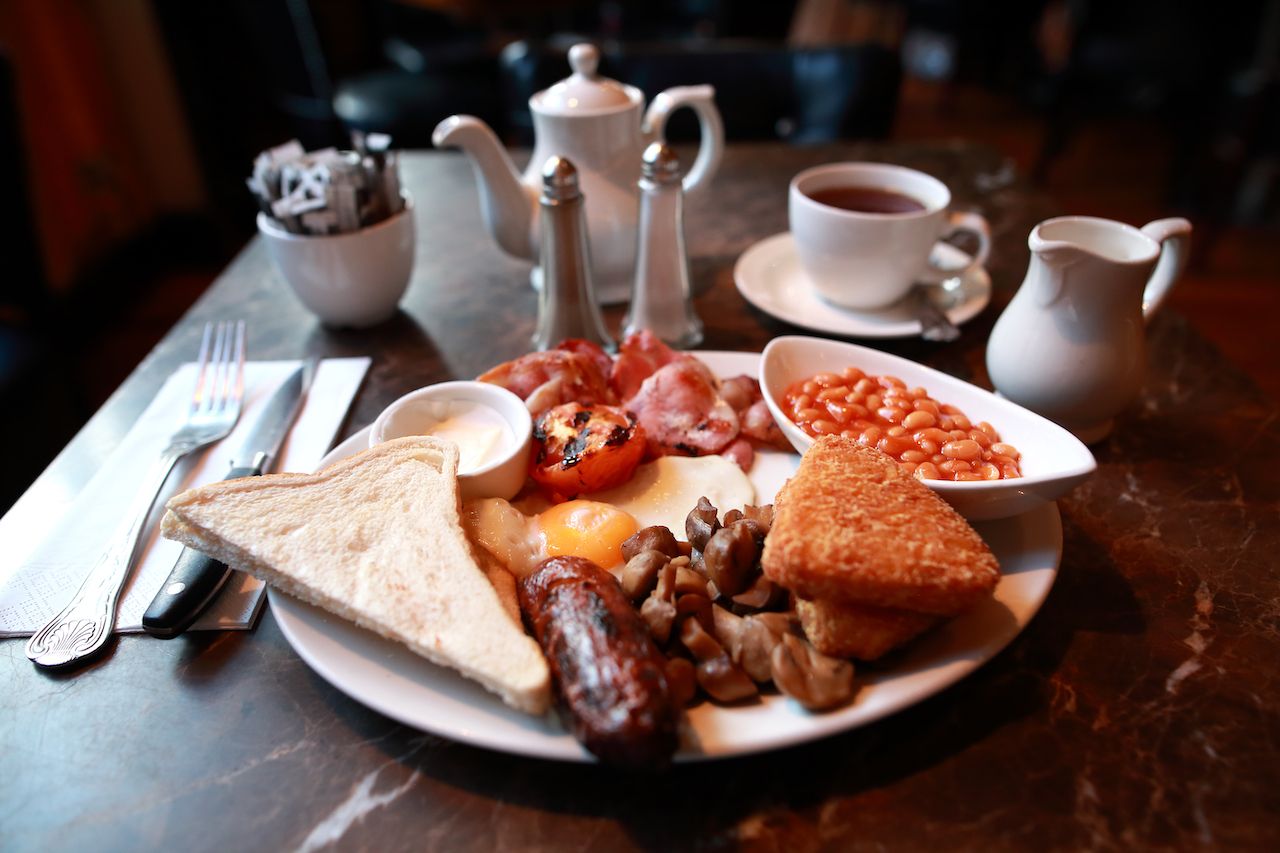 The place to start might be with famous English pork sausages, which are historically (and famously) made in Cumberland, Lincolnshire, and Yorkshire, among other counties. Also known as bangers, the recipes vary based on the region where the sausage originated. Lincolnshire sausages, for instance, are seasoned with sage and are coarsely ground, while those from Oxford are mixed with veal. Glamorgan sausage from Wales is a vegetarian combination of breadcrumbs, leeks, and cheese.

While the typical American bacon comes from pork belly, British back bacon is cut in one elegant strip from both the belly and the loin. A rasher (or slice) of back bacon has more meat than American bacon, but it’s still marbled with thin stripes of fat for extra flavor, and it tends to be thicker and rounder in shape.

This classic breakfast ingredient should be cooked the traditional way to pass the full English breakfast muster. That means frying the eggs sunny-side-up so there is plenty of yolk to soak up with your toast. However, you’ll also find that some restaurants serve English breakfast eggs scrambled or poached. If you’re making your English breakfast at home, it’s crucial to fry the bread after the bacon and sausage so that the bread soaks up the delicious grease leftover from the meat. Resist the temptation to pop the bread in the toaster.

A whole tomato cut in half should be seasoned with salt and pepper and then cooked until it becomes tender, crispy around the edges, and slightly blackened on the side facing the skillet. A cup of mushrooms — like chanterelles or portobellos — should be fried in butter.

The seasoned gourmand might balk, but a true English breakfast calls for canned baked beans. The beans are probably the only element you’re not going to want to cook in the frying pan. Although the English Breakfast Society includes baked beans on its list of must-have full English breakfast ingredients, there’s actually some debate among connoisseurs of English cuisine over whether or not they actually belong there, the most common argument against them being that they are a soggy, mushy, wet mess to an otherwise harmonious platter of buttery, greasy, salty goodness. If you do choose to include them, the English Breakfast Society suggests serving them in a small ramekin on the side so they don’t spread across the plate.

Dessert11 Creamy, Decadent English Desserts That Will Make You Wish You Were British
Tagged
Food + Drink England
What did you think of this story?
Meh
Good
Awesome