In 1987, at age 15, a crappy movie changed my life. The skateboarding in Police Academy IV inspired me to grab a board and practice the tricks I’d seen on the theater’s screen. My passion for skateboarding developed from there, and I soon started my own zine about the local skate/art/music scene in Denton, Texas, where I moved from Anchorage, Alaska, to skate year-round. My dream was to get sponsored and skate the world.

While my skills were better than some of the bros but not quite on par with the pros, my literary aspirations would end up picking up the slack in making my dream a reality. After getting a piece on skateboarding published in Sacramento’s now-defunct Heckler Magazine, I became a professional writing teacher and traveled the world that way, skateboard in hand, of course.

Being an itinerant teacher for the last 20 years, I’ve had the opportunity to visit and practice my skills on some of the most beautiful skateparks on the planet. This is my selection of cool skateparks that every skate amateur or wannabe pro should take the time to visit. 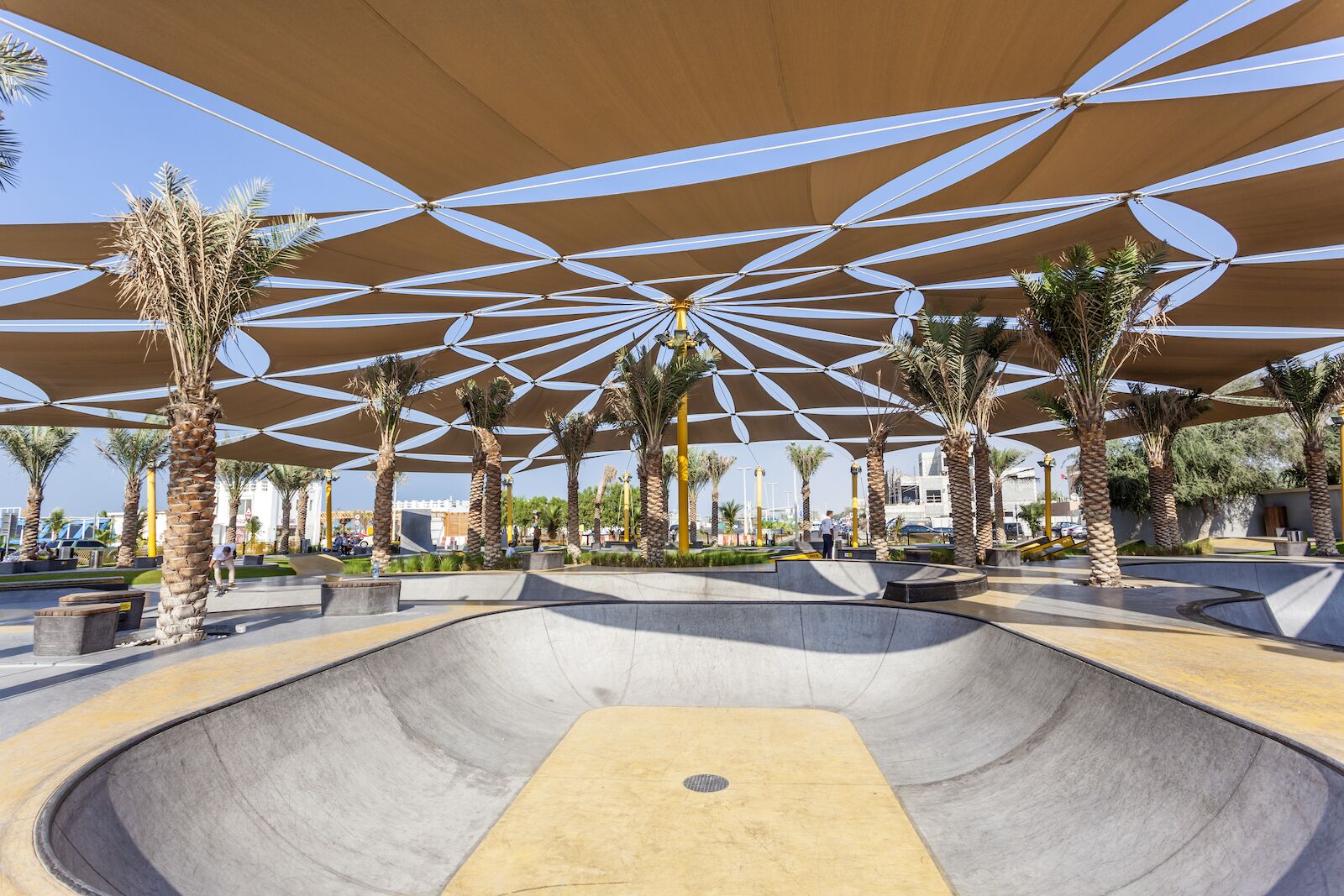 In a city obsessed with superlatives, how could the local skatepark disappoint? By combining the Kite Beach setting of date palms, white sand, and the clear Arabian Sea with Australian skatepark design knowhow, the designers at Convic have created not only the largest skatepark in the UAE at 34,444 square feet but also its most stunning. Under the big shade structure, there’s a seamless flow from the low-profile skate plaza to a 10.88 foot-deep bowl of polished concrete with gaps, ledges, and rails in between. You’ll be treated to the call to prayer ringing out from a nearby minaret more than once while performing tricks at X-Dubai. 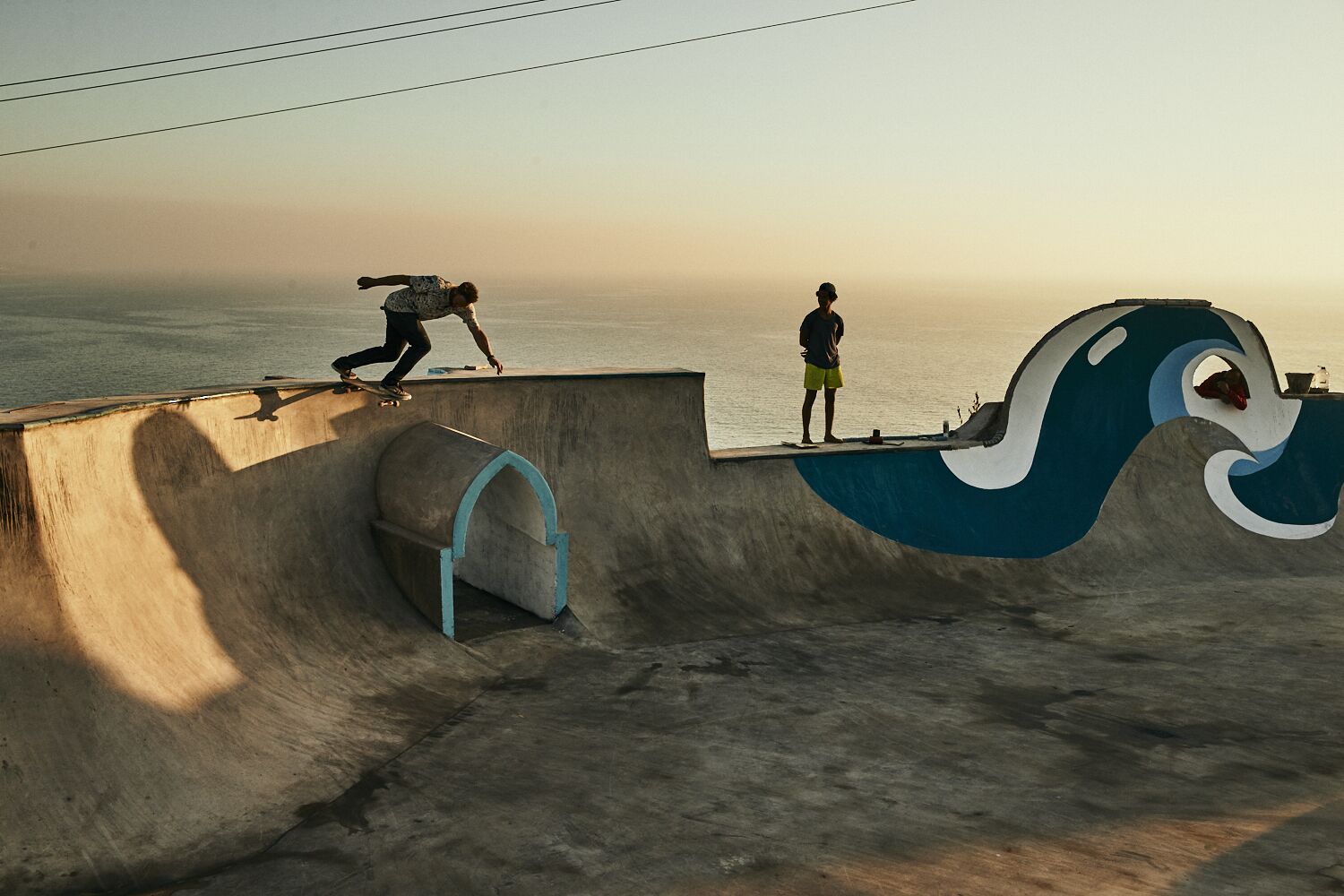 On Morocco’s Atlantic Coast, just north of the city of Agadir, is Taghazout — a sleepy fishing village known for its killer surf and its cool panoramic skatepark. Built in partnership with local skaters and international volunteers from the Make Life Skate Life Foundation, the park draws inspiration from the North African surf scene and Islamic architecture while creating a unique, creative space for cultural exchange. The Taghazout Skatepark Association not only hooks up young local surfers who can’t afford gear with skateboards and protective accessories but also organizes skate classes three days per week (or whenever the waves aren’t pumping). 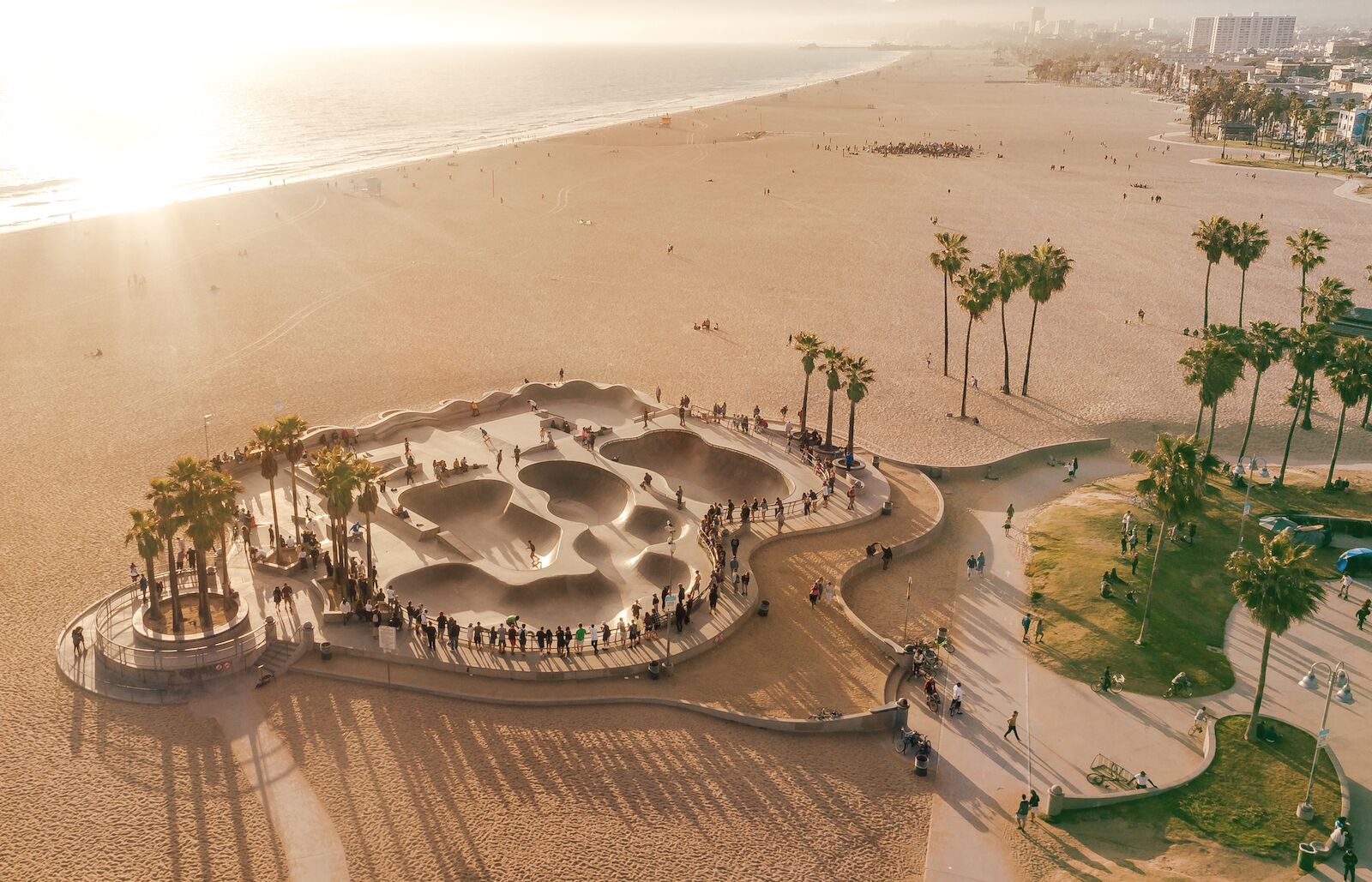 In skateboarding culture, Venice Beach is hallowed ground. In the 1970s, the local DogTown crew and Z-Boys ushered in the vertical era of skating by being the first to perform aerial maneuvers in backyard pools. California Skateparks Designer Zach Wormhoudt (a Mavericks big wave surfer, no less) helped ensure that hometown hero Jesse Martinez’s 20-year battle to get a cool skatepark built in Venice would be done right, with help from technical design consultants Christian Hosoi and Pat Ngoho (skateboarding legends in their own right). The 2009 result is awe-inspiring. You can see the evolution from surfing to skating and the rich cultural history represented in the smooth flow of the concrete bowls, pool tiles, and snake run. 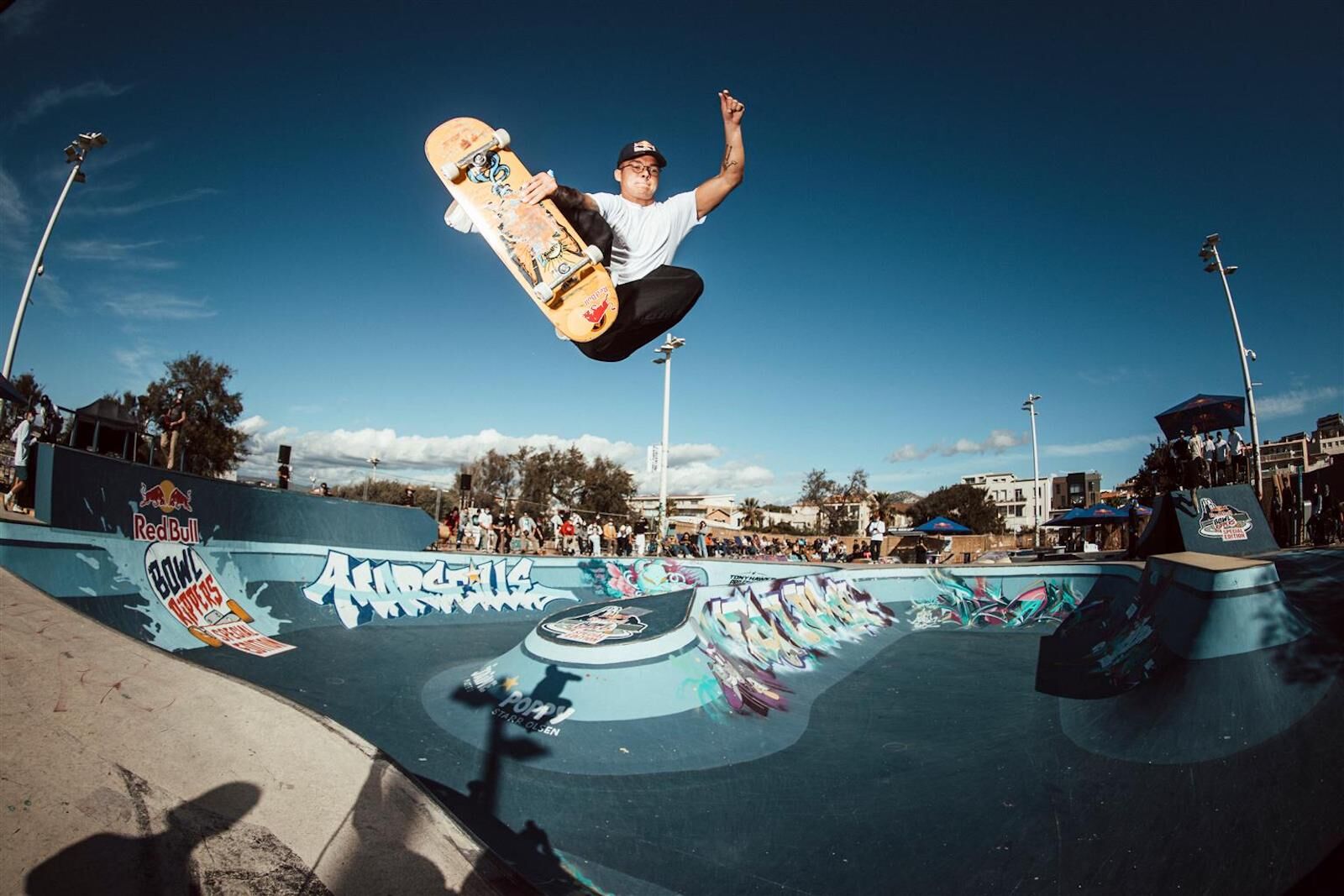 If you’ve ever played the video game Tony Hawk’s Pro Skater, the Skatepark Du Prado (AKA Marseille Skatepark) will be very familiar. In the skate world, it’s that famous and was once even touted as the best skatepark in the world. With its clover-shaped pool, endless lines, and primo location on a topless beach in the south of France, I wouldn’t argue that Jean-Pierre’s urban masterpiece is anything less than perfect. 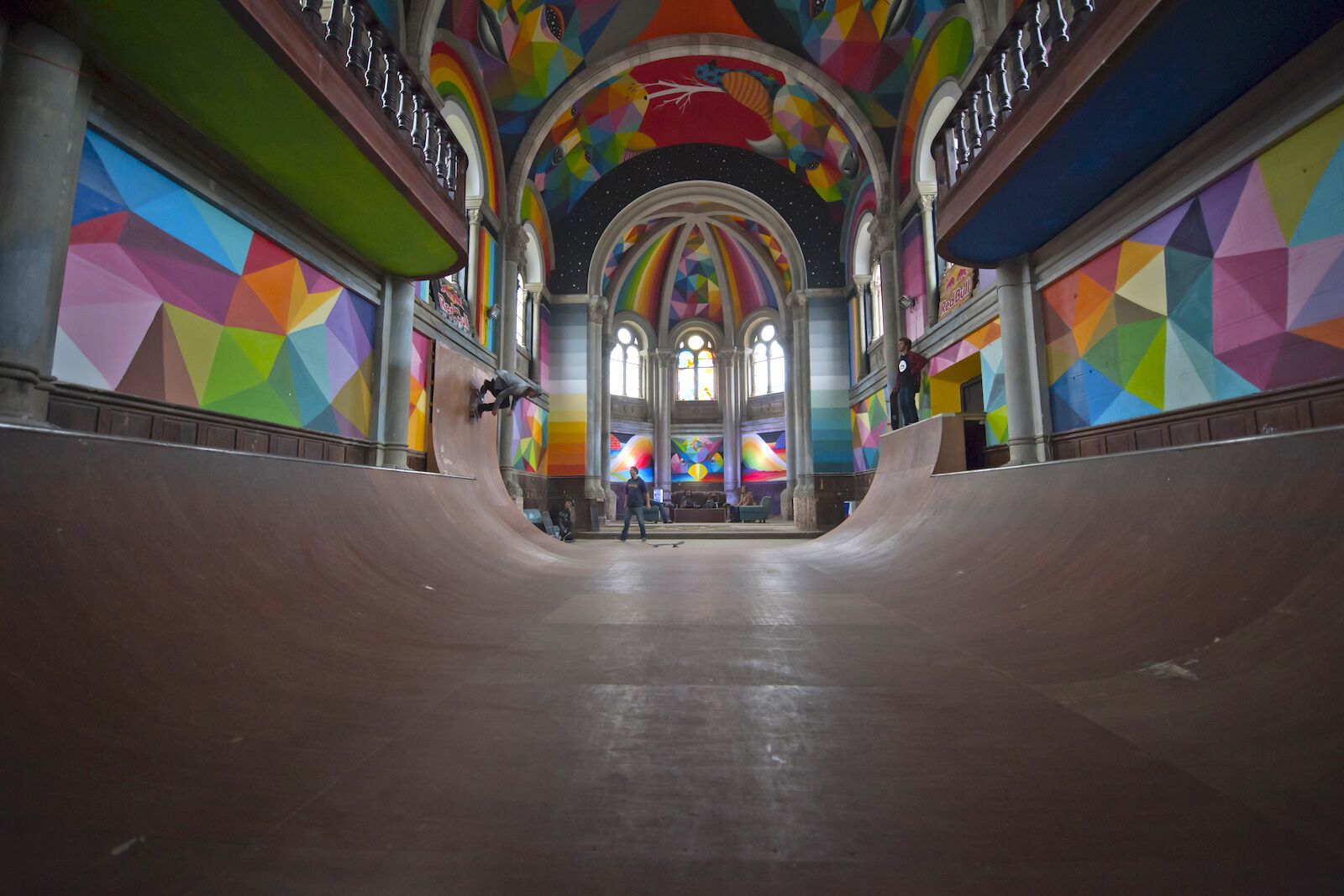 If Venice Beach is skateboarding’s hallowed ground, then the Kaos Temple in Llanera, Spain, is its Sistine Chapel. Transforming an abandoned 100-year-old church into something beautiful took a group of local skaters with a vision. Calling themselves the Church Brigade, they collaborated with urban artist Okuda San Miguel and his team at Ink & Movement to repurpose the dilapidated building into a psychedelic skate sanctuary. The resulting kaleidoscope of geometric faces and animal motifs painted inside play with the light from the stained-glass windows in much the same way the skaters play with gravity and physics on the halfpipe — creating a mystical atmosphere unlike any other skatepark in the world. 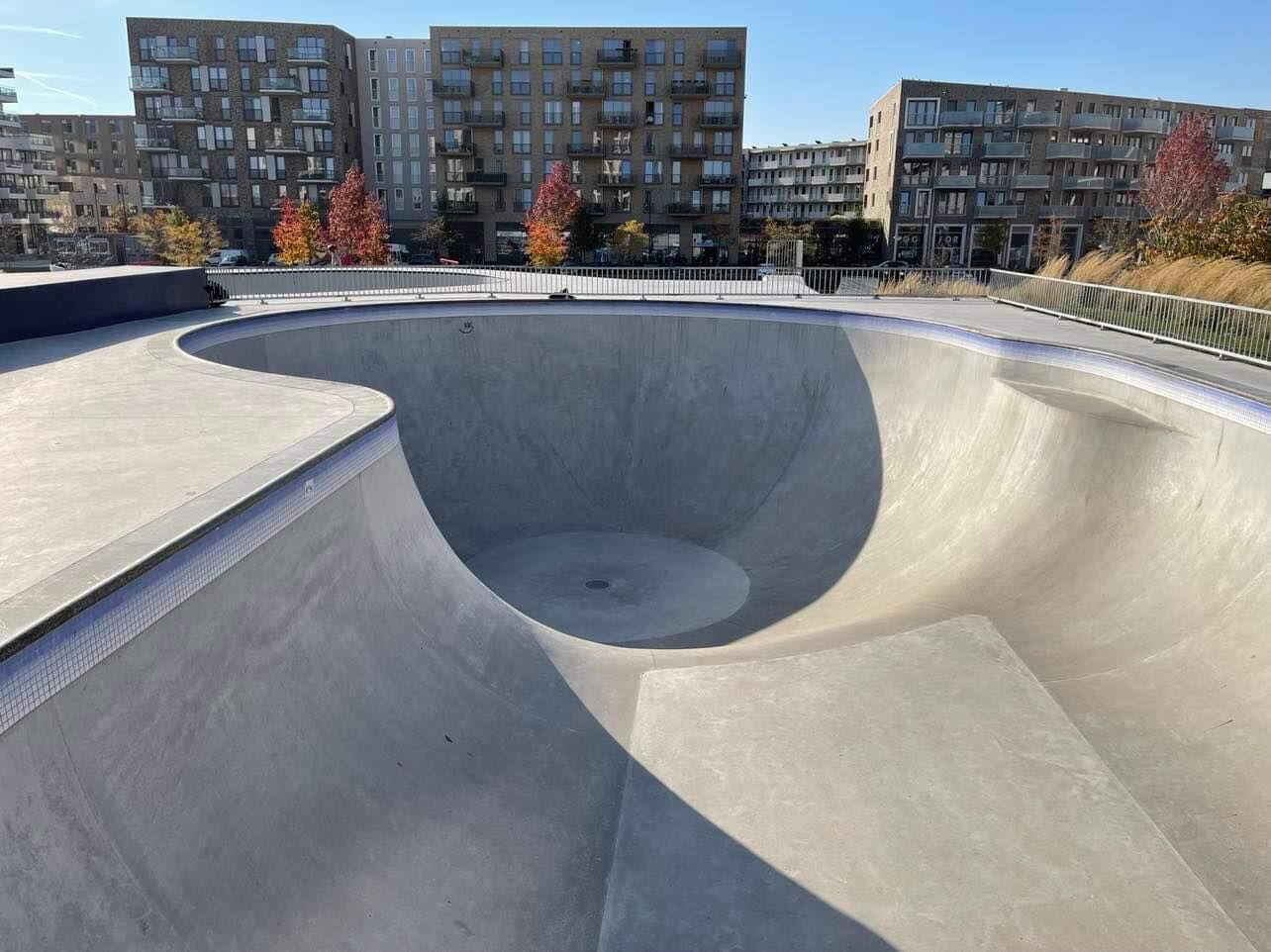 Leave it to Amsterdam to mash up tradition, aesthetics, and function into a beautiful love triangle. By building this skatepark up rather than down (the Amstel riverbed upon which it stands would have it no other way), the Danish Agency Glifberg & Lykke has embraced the challenges of the typography while honoring the traditional land reclamation techniques that have spread the city far and wide. The typically Dutch Delft Blue tile, sprinkled throughout this cool skatepark, gives it a unique sense of place and local flavor. 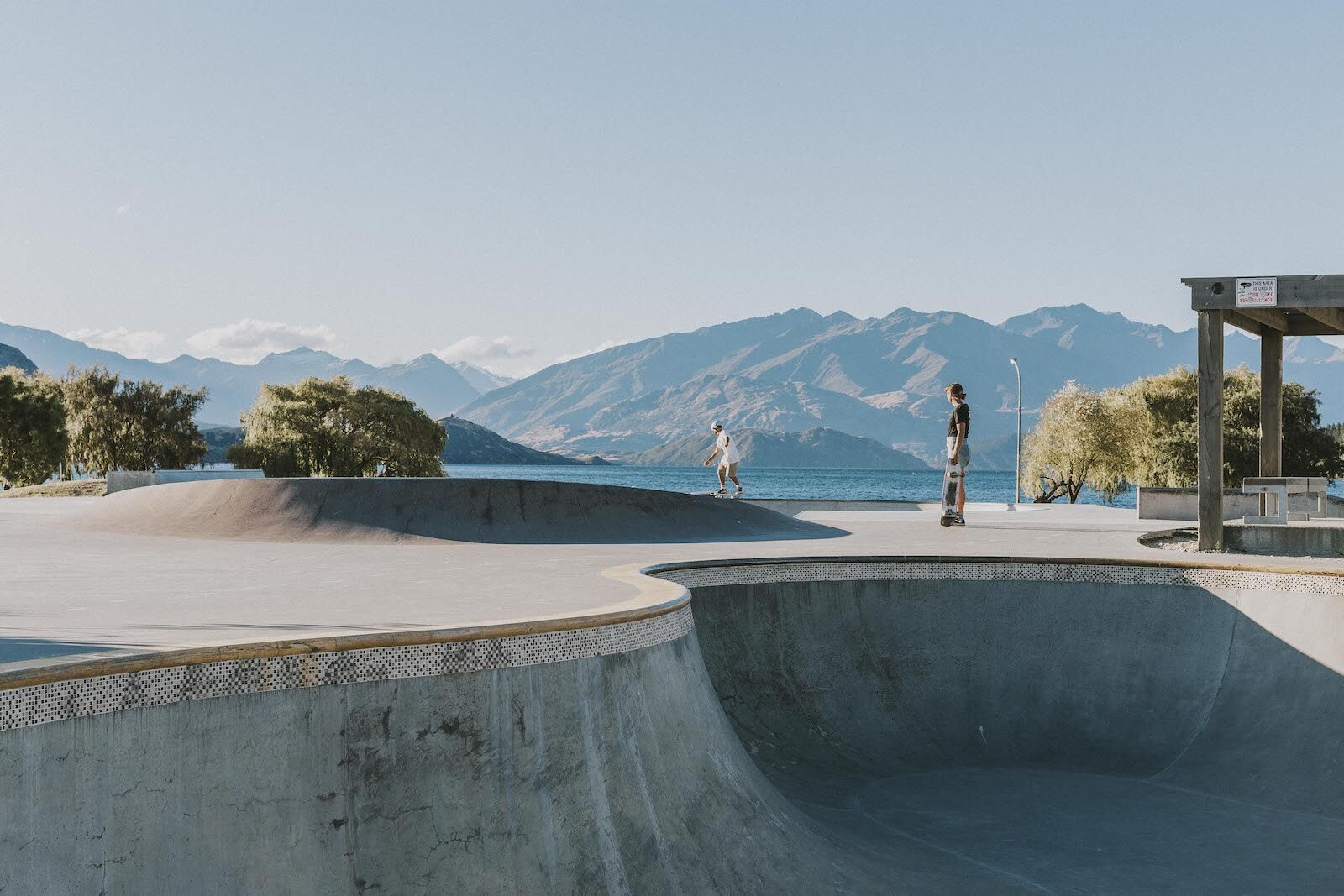 Towards the southern end of New Zealand’s South Island, in the mountainous Otago Region, amidst beech forests, glaciers, and alpine lakes, you’ll find the burgeoning resort town of Wanaka. There on the glacial plain, on the shores of the town’s namesake lake is a cool skatepark designed by Jason Parkes of Premium Skatepark Designs. Standing on the edge of the 12-foot-deep clover-shaped bowl with snow-capped mountains in the background, you’ll aspire to greatness yourself and understand why this park has also become an attraction for snowboarders and free skiers alike — it’s so pristine and beautifully laid out that even in the summertime, you’ll feel like you’re carving through fresh powder at one of the nearby ski resorts. 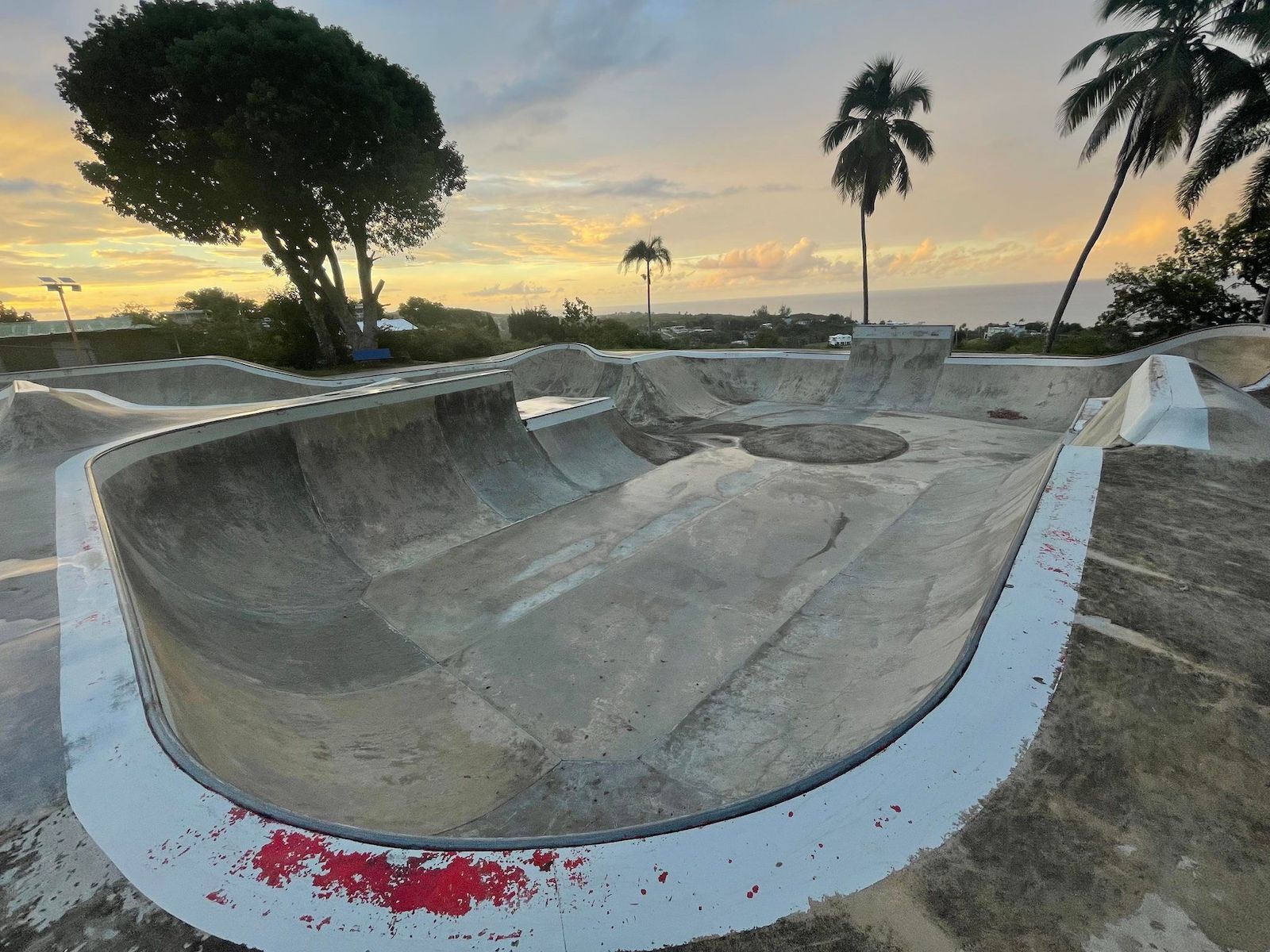 It’s hard to beat a skatepark with an ocean view. Quebradillas Roller Vertical Exploration (RVE) Skatepark in San Jose, Puerto Rico, has a view of the Caribbean Sea framed by coconut trees, no less. What started as Miguel Ramos’s DIY lovechild back in 1988 has since blossomed, thanks to skatepark designer Stefan Houser, into a Boricua beauty that has it all — a silky surface, beautiful curves and vertical extensions that keeps skaters coming back for more. 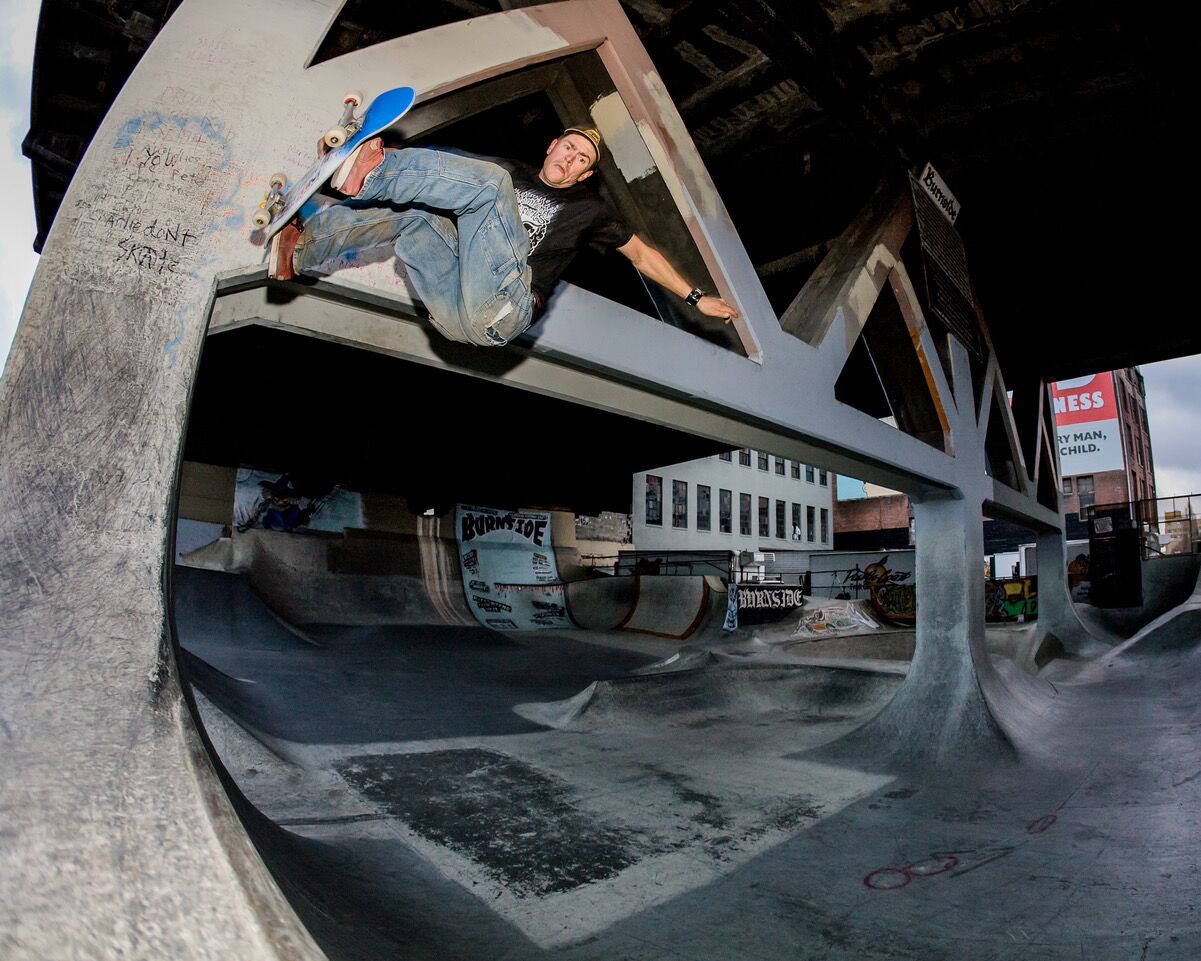 What makes the original DIY skatepark under the east end of the Burnside Bridge in Portland, Oregon, so beautiful is that it epitomizes the rebellious nature of skateboard architecture. Like most of the DIYs it has inspired since its inception in 1990, Burnside was built without permission in an urban wasteland. It has since become an icon of the skateboarding world, a concrete testament to the belief in the freedom of personal expression and a legitimate stop on the Portland Walking Tour. 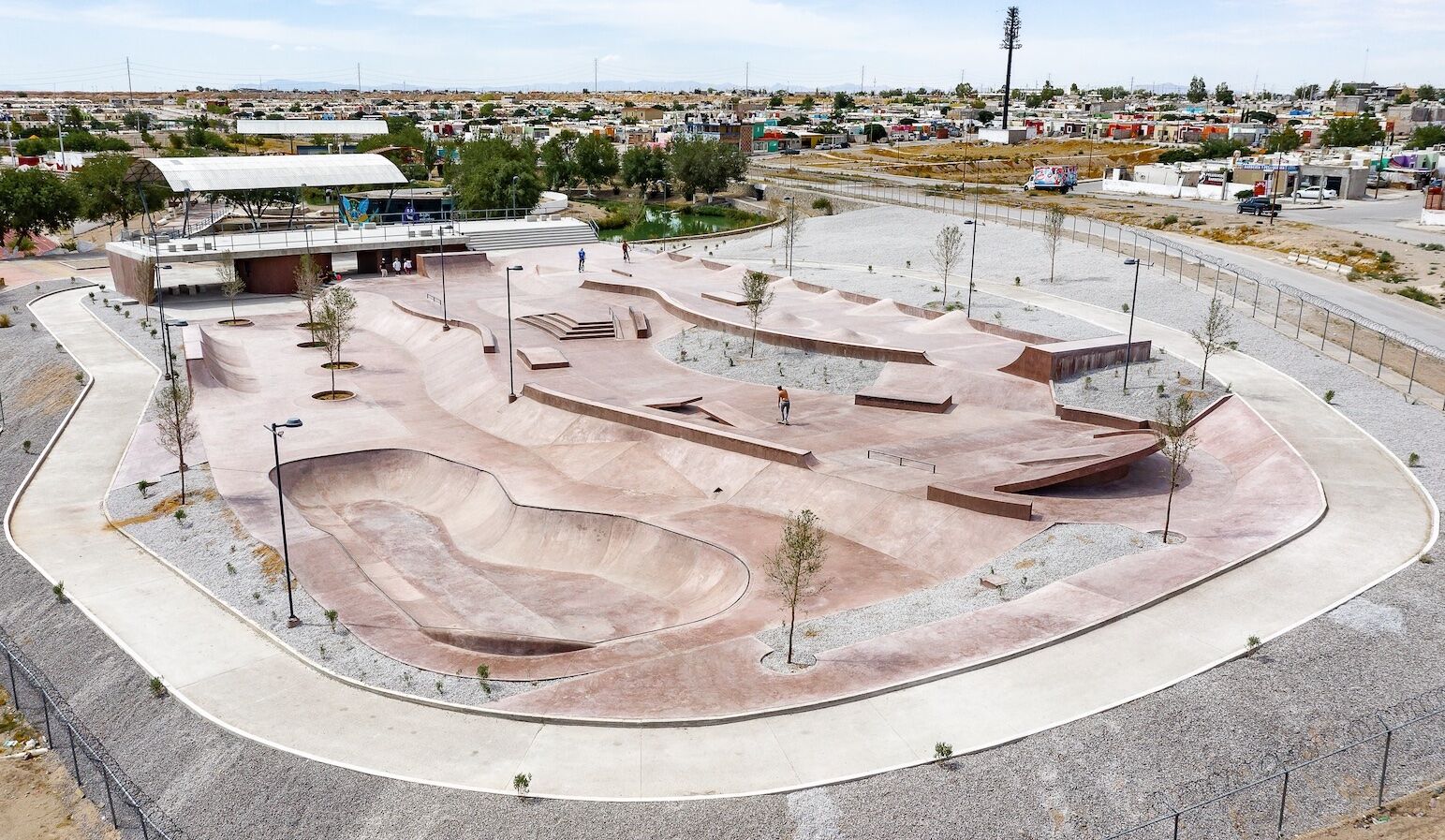 With an undulant pink concrete landscape that’s reminiscent of the Samalayuca Dune Fields in the Chihuahuan Desert, La Duna beautifully embodies the next generation’s way of thinking about the role cool skateparks can play in an urban environment. The local municipality commissioned the Elias Group to design a skatepark that would draw the community together to improve marginalized barrios. By wrapping a cycle track around the skatepark’s three zones — a bowl, street, and beginner’s area (separated by endemic trees and desert flora) — and building a viewing deck with a classroom/office combo underneath, the skatepark has been integrated into the existing recreational area and connected to the surrounding neighborhood, encouraging youth and adults alike to engage with the space. 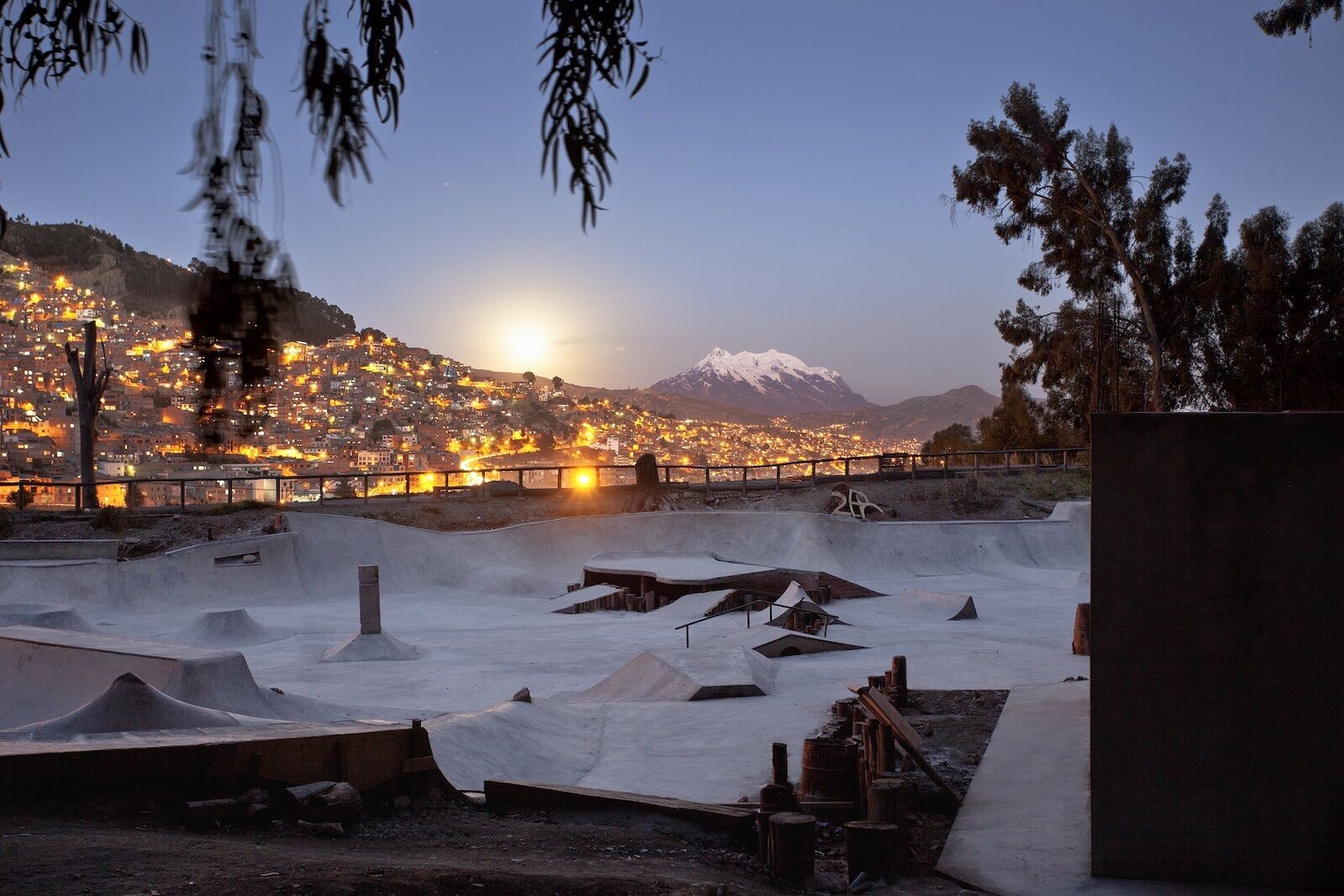 At 13,000 feet above sea level, Pura Pura is the highest skatepark in the world. What’s so beautiful about this place, aside from the swaying eucalyptus trees all around and the stunning view of snow-capped Mt. Huayna Potosi in the distance, is that it embodies the collaborative yet anarchistic spirit of skateboarding. Pura Pura Skatepark was a global DIY collab with over a hundred volunteer skatepark builders from 17 different countries camping out on site for a month to give youth an outlet for their energies. 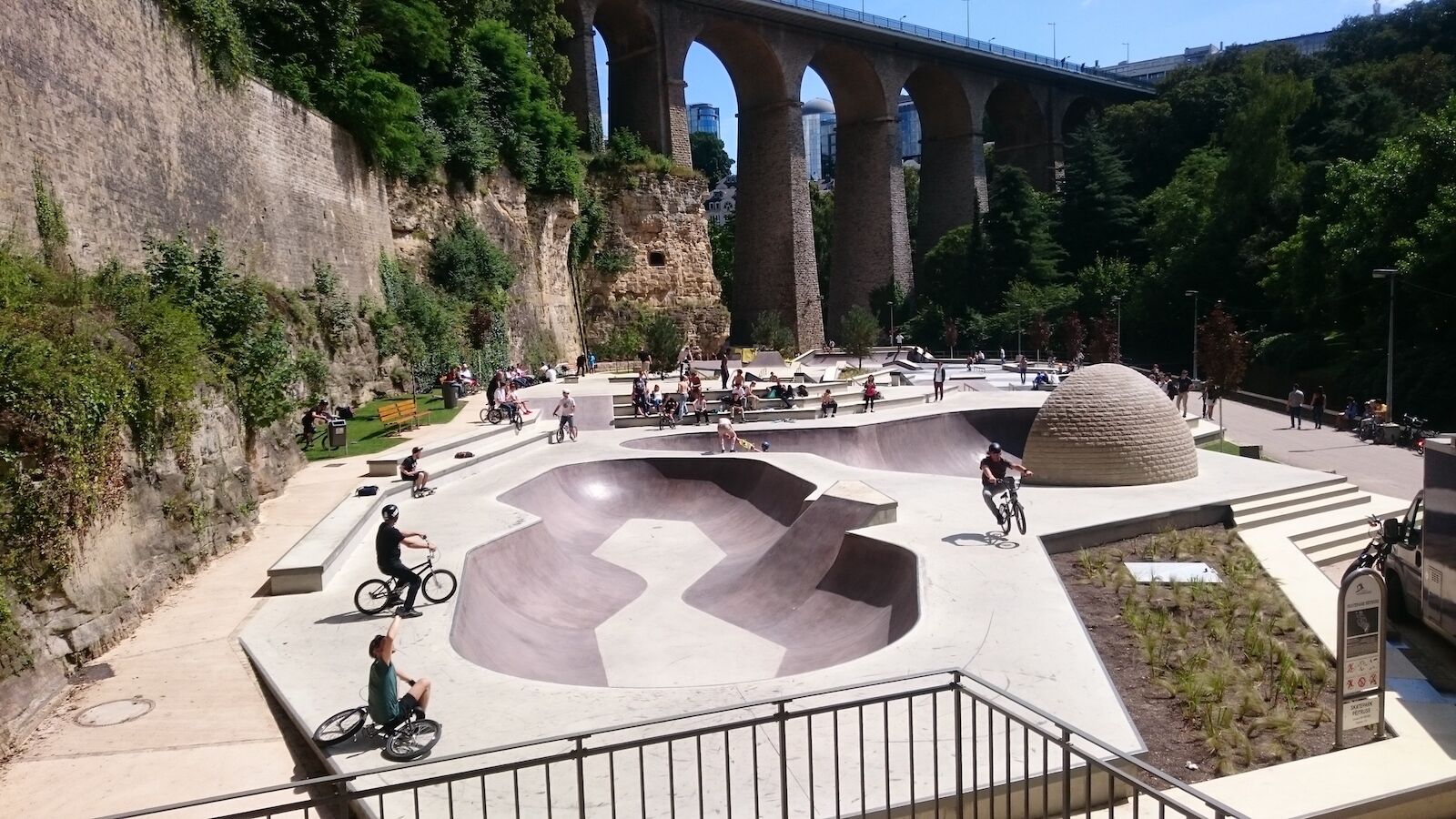 A cool skatepark inspired by a 16th-century impregnable fortress? Just on the outside wall of the medieval city of Luxembourg, you’ll find just such a park next to the bridge leading into the old city. By incorporating the same hexagonal patterns from the town’s Vauban Fortress and coloring the skatepark with a palette of maroon, gray, and white concrete, the designers at Constructo Skatepark Architecture have created a thoughtful and fun homage to the site’s heritage. By integrating levels that separate the sections of the park (bowl, flow, plaza), they’ve blended it into the patchwork parkland of the Péitruss Valley — popular for its playgrounds, fitness parks, pathways and picnic areas. 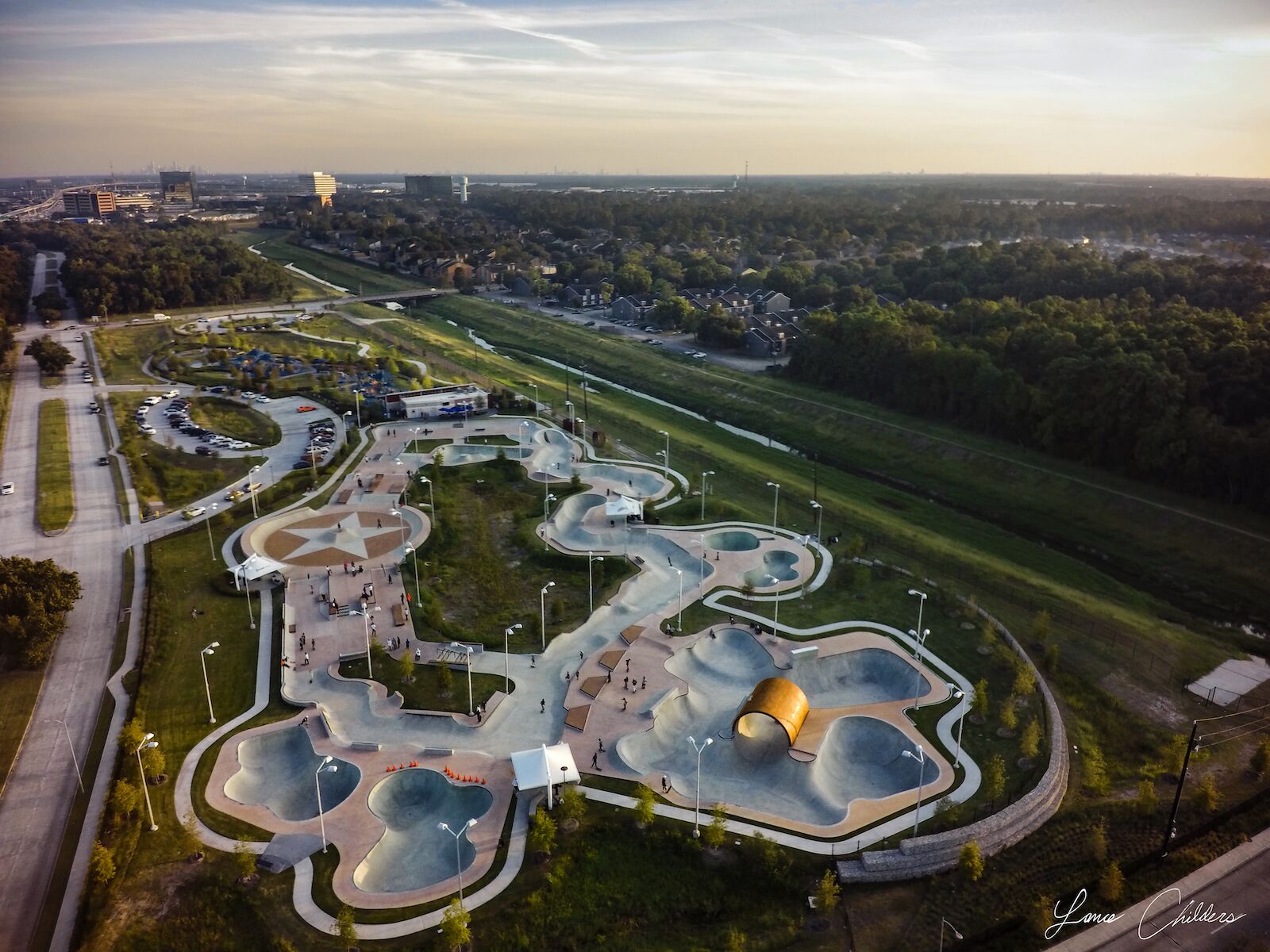 With its smooth lines and seemingly endless curves, the North Houston Skatepark is not only one of the most beautiful, but at 78,000 square feet, it is also one of the biggest in North America and the second-largest in the world. The folks at Grindline took the maxim, “bigger is better” to the extreme with a 10-foot-deep bowl made in the shape of Texas and a 20-foot-tall full pipe right in the heart of it. For those leery of riding such a huge tube, there’s a gigantic (yet mellow) Lone Star at the heart of the street section that will send you careening towards an endless array of ledges, rails, benches, banks and quarter pipes. And there’s also a 12-foot vertical ramp, backyard-style pools, three flow bowls, and a snake run. 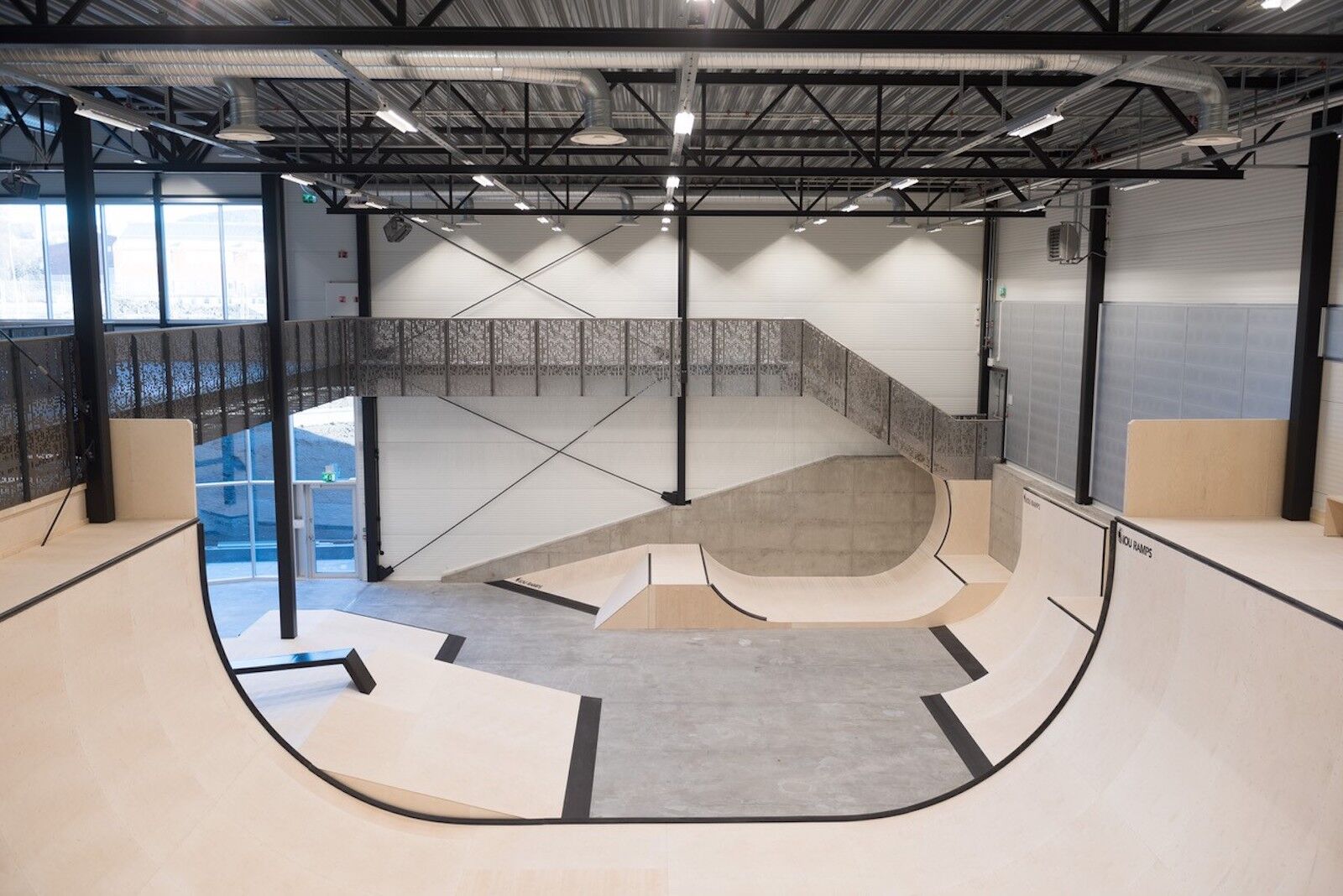 The Scandinavian aesthetic is in full effect in this cool skatepark designed by Dark Arkitekter, Glifberg-Lykke, and IOU Ramps. Skatehall is sheathed in aluminum panels pierced with a pattern derived from a Morse code translation of the 1978 law that banned skateboarding in the entire country. While industrial on the outside, it’s decidedly organic on the inside thanks to its centerpiece – the mezzanine floor wooden bowl. With its tree-like columns stretching out and supporting the bean shaped bowl overhead, it feels like skating under a canopy of white spruce and birchwood in a Norwegian forest. The adjacent cafe and upper walkways ensure spectators can take in the scene from all angles without disrupting the flow of the skaters. 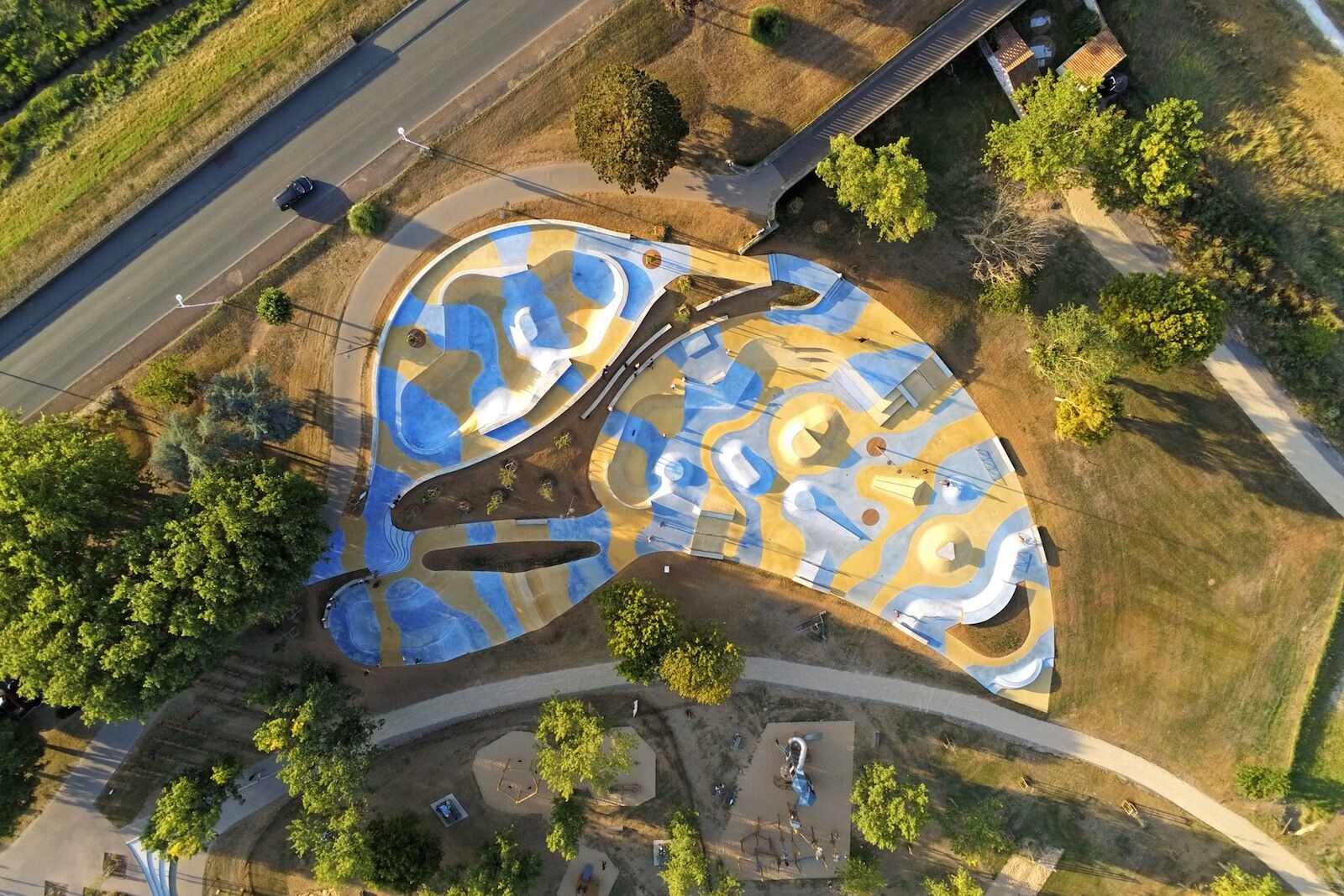 On France’s Atlantic coast, between the Lay River and the Bay of Biscay, you’ll find a super cool skatepark. Basing the concept on sand and sea, the guys at Constructo Skatepark Architecture used blue and yellow concrete to reflect the local environment and to help revitalize the area that was submerged in 2010 by Storm Xynthia. Besides the color scheme in the bowls, street area, and snake run, what makes this park unique is that it marks a new era in skatepark construction. Skateparks are now seen as an asset — as a way to makeover a city, to create a young and dynamic new image.