National flags often fall victim to an unfair generalization. There’s a tendency to believe that they’re mostly boring rectangles, with stars, stripes, maybe an esoteric crest, and are only worth studying if you’re on a pub trivia team. Vexillophiles, flag enthusiasts and collectors, know better. Flags are more than a patriotic display or a piece of decoration, they’re windows into a nation’s history and identity. Flags come in all colors, and have meanings as varied as the countries they represent, and you don’t have to binge-watch Sheldon Cooper’s Fun With Flags to appreciate them. These are some of the world’s coolest national flags and the stories behind them. 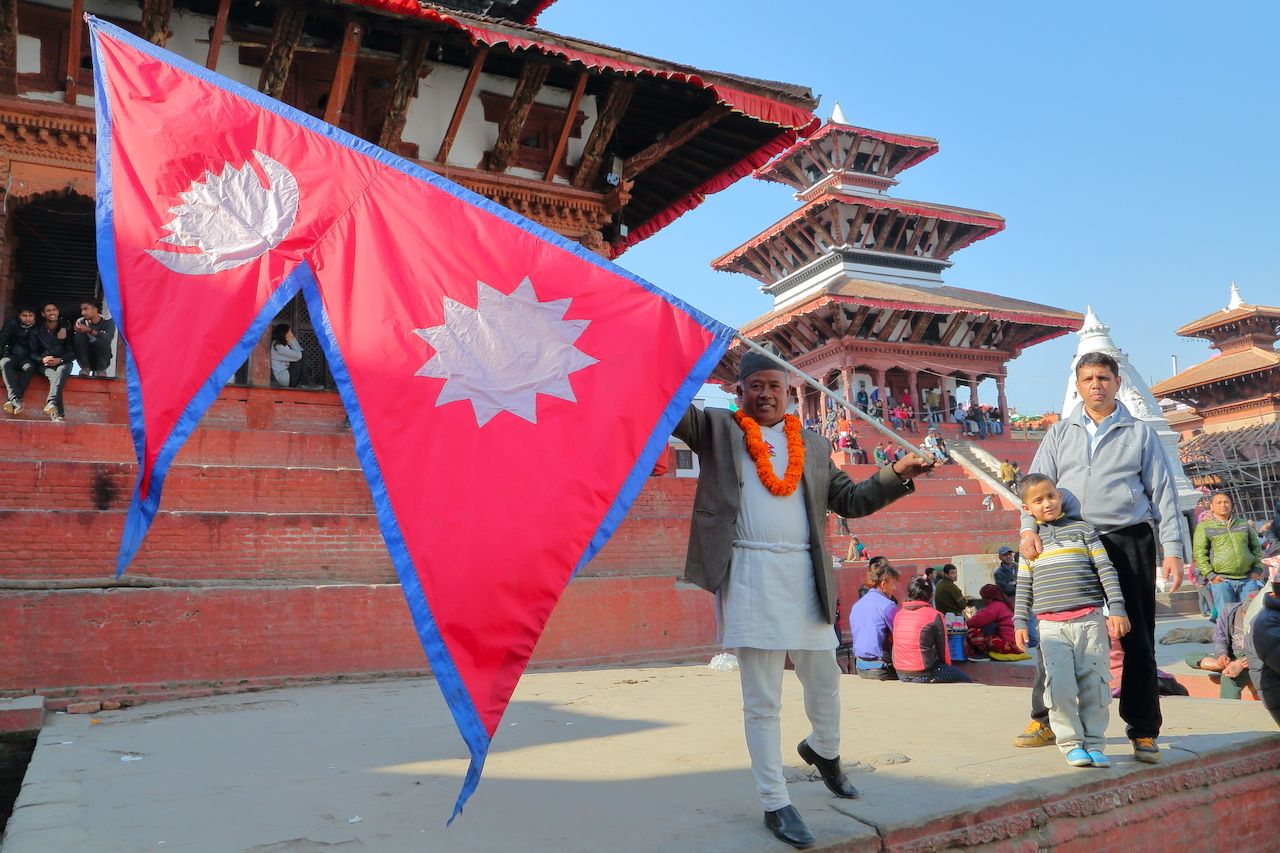 It doesn’t take a magnifying glass to see what makes Nepal’s national flag so unique. The only non-quadrilateral flag in the world, its jagged edges represent the Himalayan Mountains. The flag was adopted after the unification of the smaller principalities of Nepal, with the blue border symbolizing peace and harmony, and the red background — the national color — indicating the brave spirit of the Nepalese people. The sun and moon symbols are an expression of the hope that Nepal will survive as long as the celestial bodies. 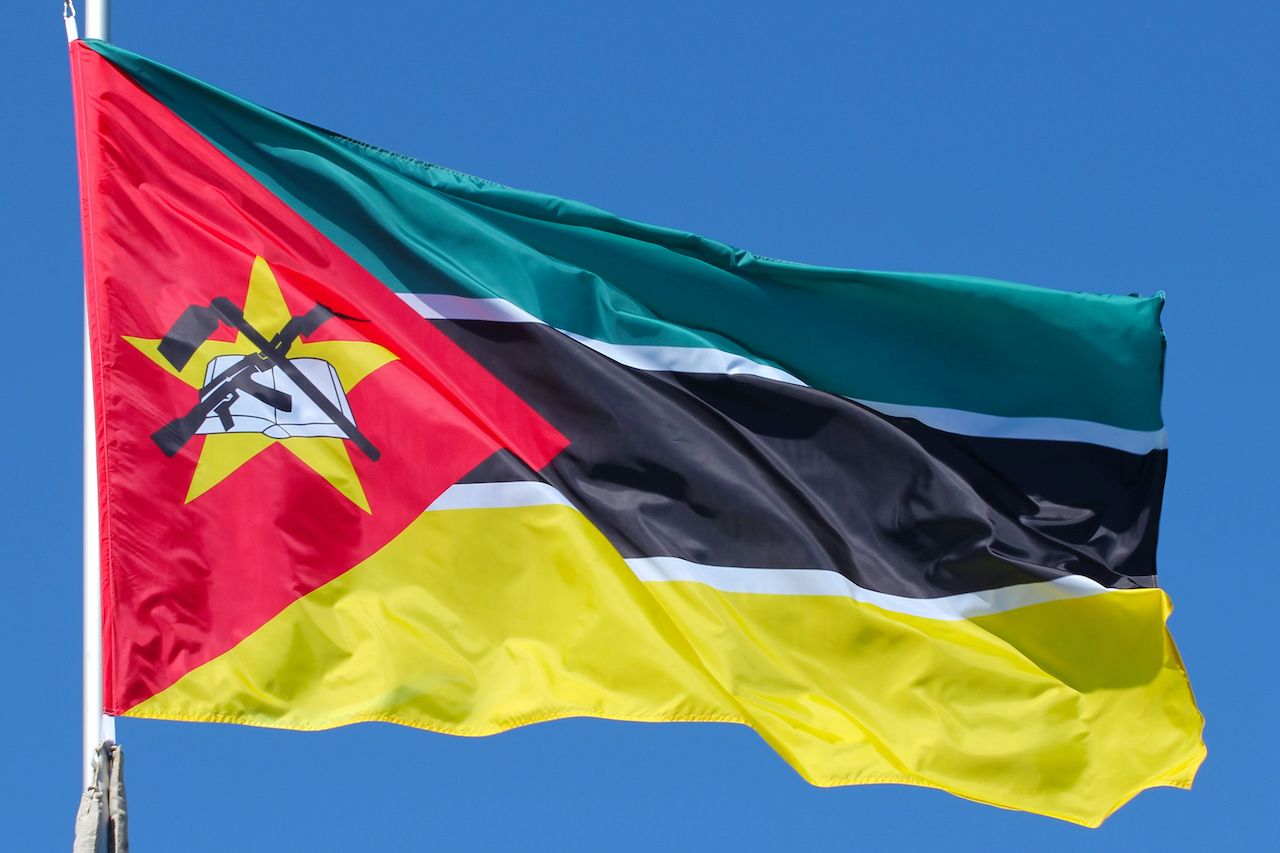 The flag of Mozambique basically says, “Come on, try it. We dare you.” The only flag in the world to feature an automatic weapon, this flag conveys a message of vigilance and a dedication to national defense. In addition to the AK-47, the flag also has a hoe, open book, and a star, symbolizing agriculture, education, and Marxism, respectively. The black stripe represents the African continent and the green represents minerals. Consistent with the prominent appearance of the rifle, the yellow stripe is a nod to Mozambique’s struggle for independence. 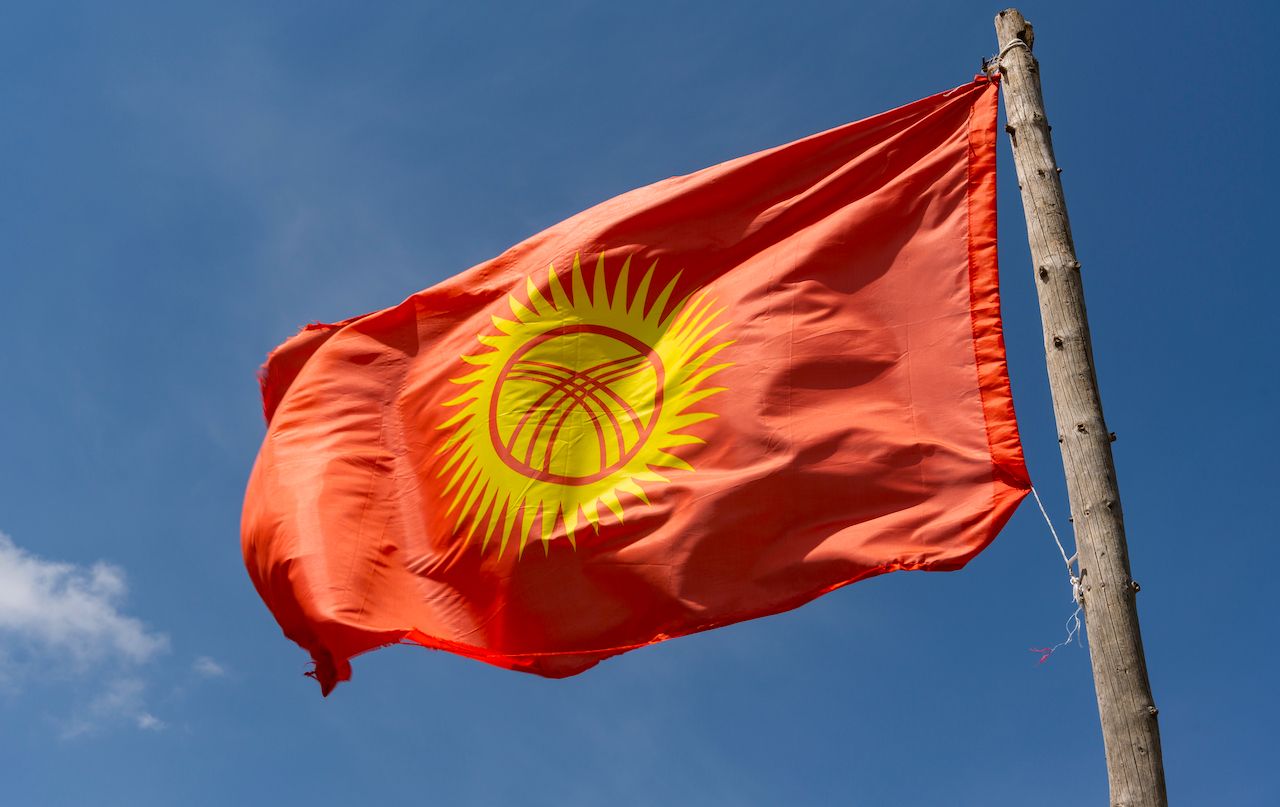 It might look like the official flag for the International Basketball Federation, but it’s actually the national flag of Kyrgyzstan, and it’s more complex than it looks. After declaring independence from the Soviet Union in 1991, Kyrgyzstan adopted the new flag in 1992. It features a sun in the middle, representing peace and wealth, against a red background symbolizing valor and bravery. The forty rays around the sun symbolize the 40 different Kyrgyz tribes that were unified by the epic hero Mansas against the Mongols. Inside the sun, a tundunk symbol — which looks like a red ring crossed by two sets of lines — is meant to resemble the traditional Kyrgyz yurt (more precisely the wooden crown that holds the poles together from the top of a yurt’s roof), and represent the family home. 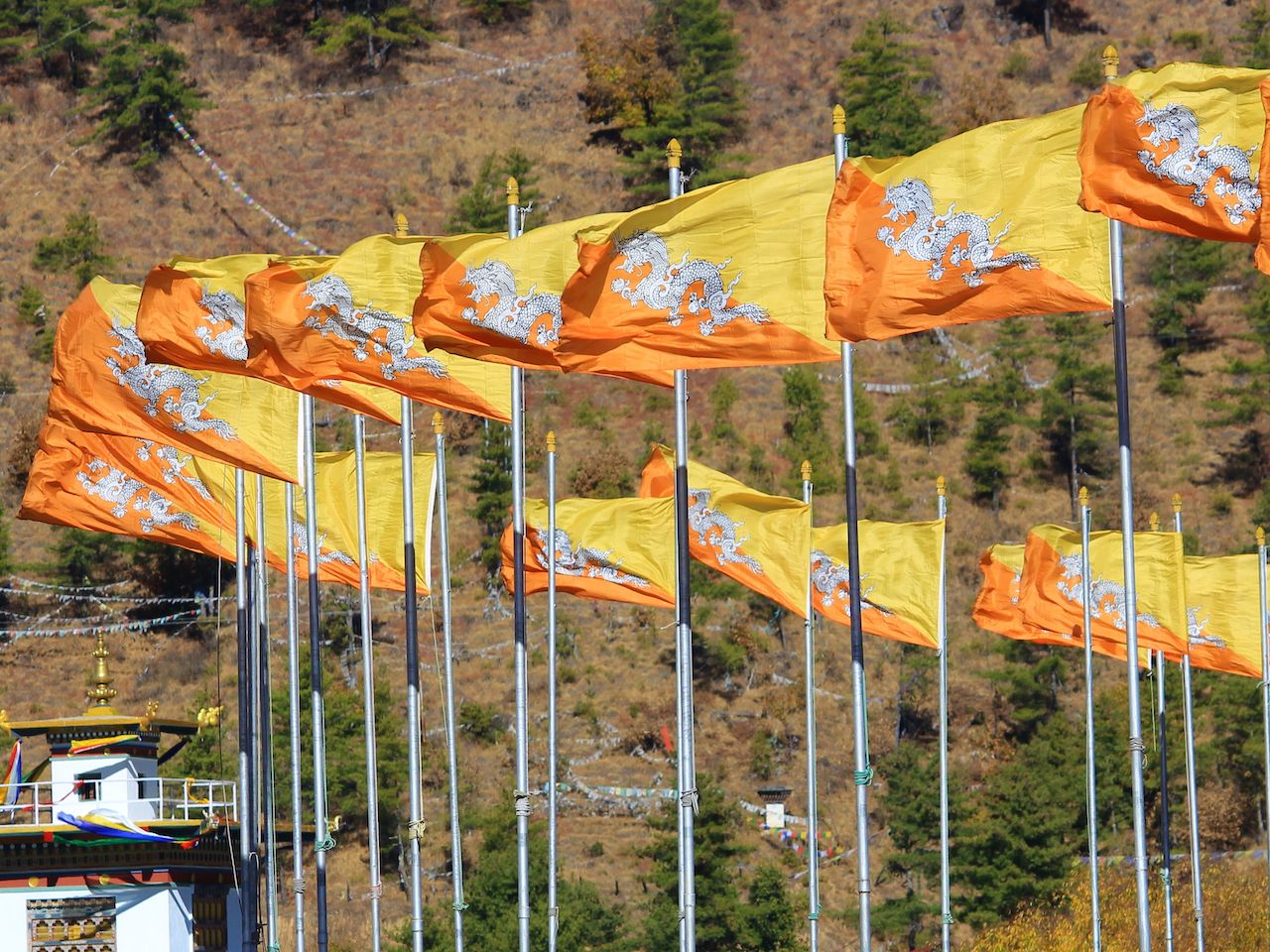 Any flag with a dragon on it is bound to catch your eye. The current design of Bhutan’s national flag has been in place since 1969, the background divided diagonally between yellow and orange. Yellow symbolizes the civil tradition and authority of the king, while orange represents the country’s Buddhist tradition. But it’s the white dragon that really steals the show. The Druk, or “Thunder Dragon,” symbolizes the purity of inner deeds and thought. The Druk is also clutching jewels in its claws, showing off the country’s wealth. 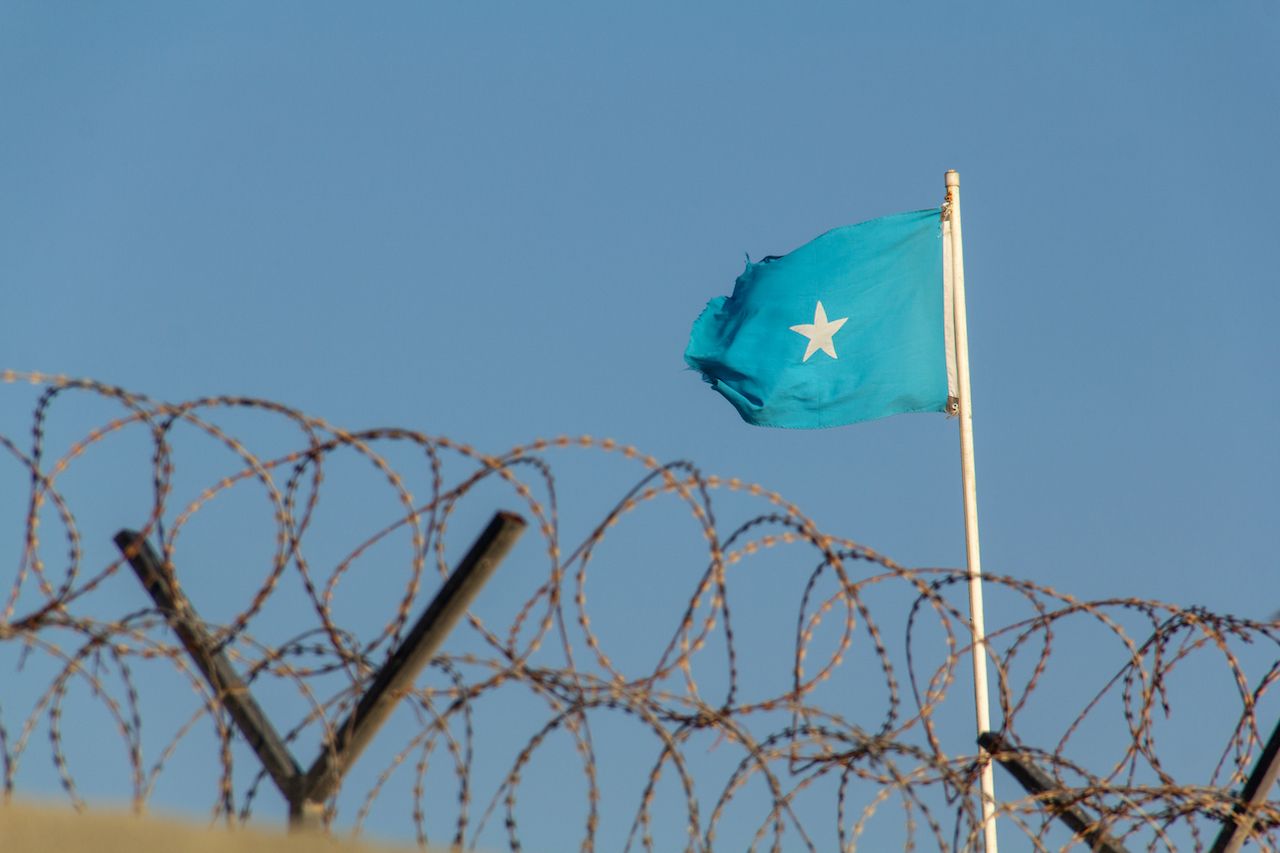 The national flag of Somalia proves that even the simplest, seemingly mundane designs are teeming with deeper meaning. From 1950 to 1960, Somalia had been the Trust Territory of Somaliland administered by Italy, and in 1954, the Somali labor trade union tasked Mohammed Awale Liban with designing a new flag to prepare for the country’s impending independence. Although composed of a simple blue background and a white star, the flag speaks to Somalia’s history and culture. Originally, the blue background represented the UN’s role in Somalia’s transition to independence. Now, it has come to symbolize the Indian Ocean and sky. The five-pointed Star of Unity represents the five areas where the Somali people traditionally lived: Djibouti, Somaliland, southern Somalia, the Ogaden region of Ethiopia, and Kenya’s North Eastern Province. 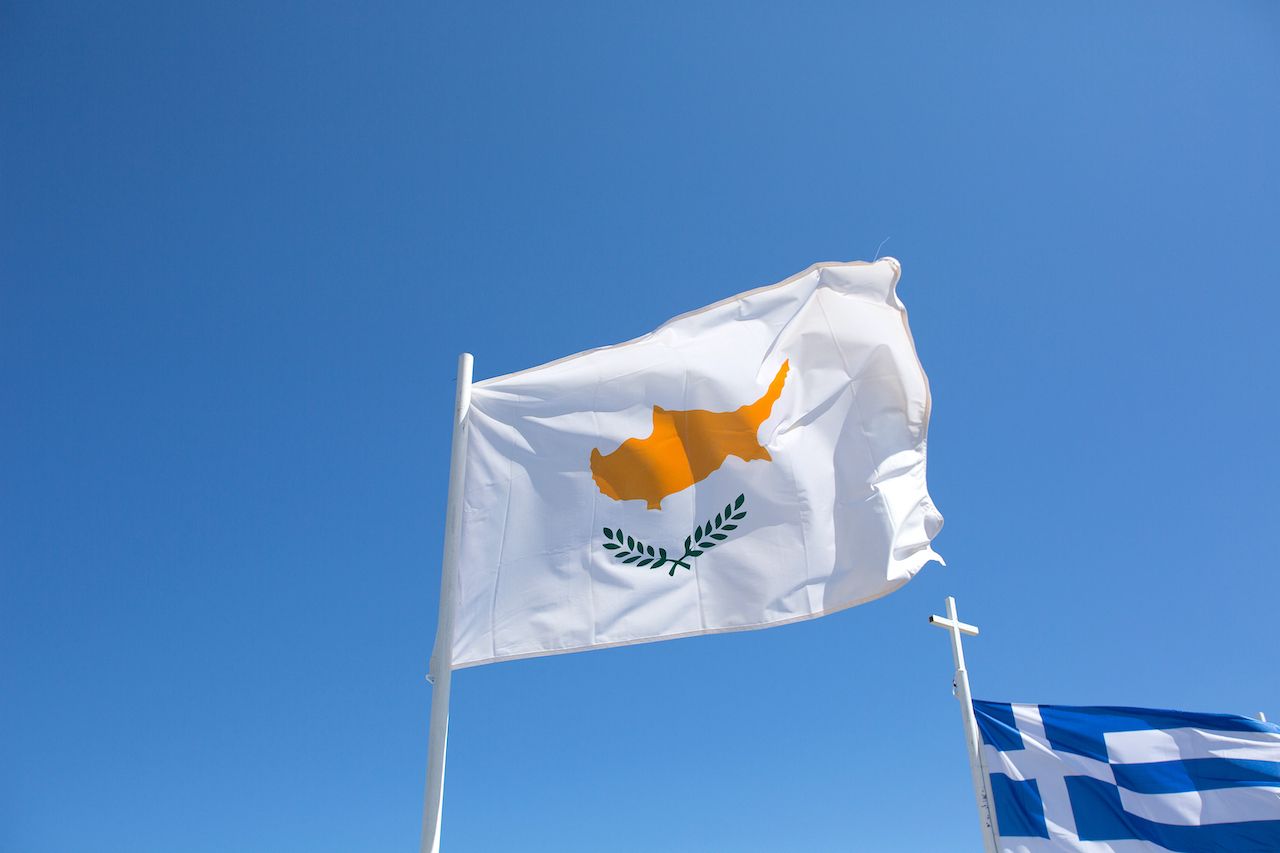 Nothing injures your national pride more than when people can’t find your country on a map. Cyprus, the small island nation in the middle of the Mediterranean, is using its flag to eliminate all doubts about what the country looks like. Against a plain white background, the silhouette of the country stands proud and prominent, its ochre color representing the island’s copper resources. When it was initially designed in 1960, the use of any blue and red was banned, as those colors defined the flags of Greece and Turkey; since 1974, the country has been divided in two parts, one led by a Turkish Cypriot government and the other one by a Greek Cypriot government. The crossed branches underneath the silhouette, however, represent the desire for peaceful relations with its neighboring countries. 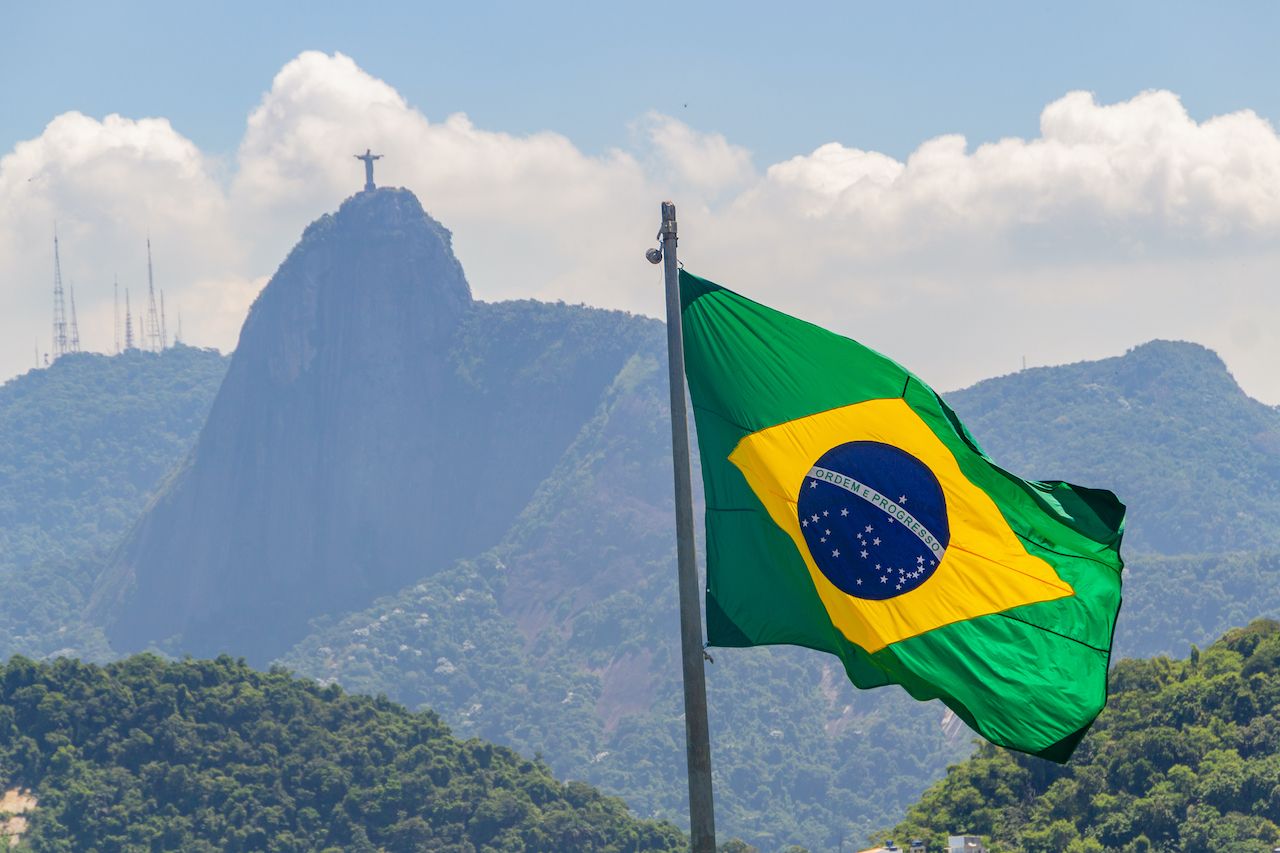 One of the world’s most recognizable, Brazil’s flag still raises many eyebrows for its unique design. Its most defining feature is the massive globe in the center, containing white stars that represent the various states of Brazil. The crosswise banner bears the country’s motto, Ordem e Progresso (“Order and Progress”). You might be wondering why only one star sits above the banner, and yes, it’s intentional. The lone star represents the sole Brazilian territory in the northern hemisphere — Pará state. Once standing for the country’s ruling Portugese families, the green background has now come to symbolize the Amazon forests. 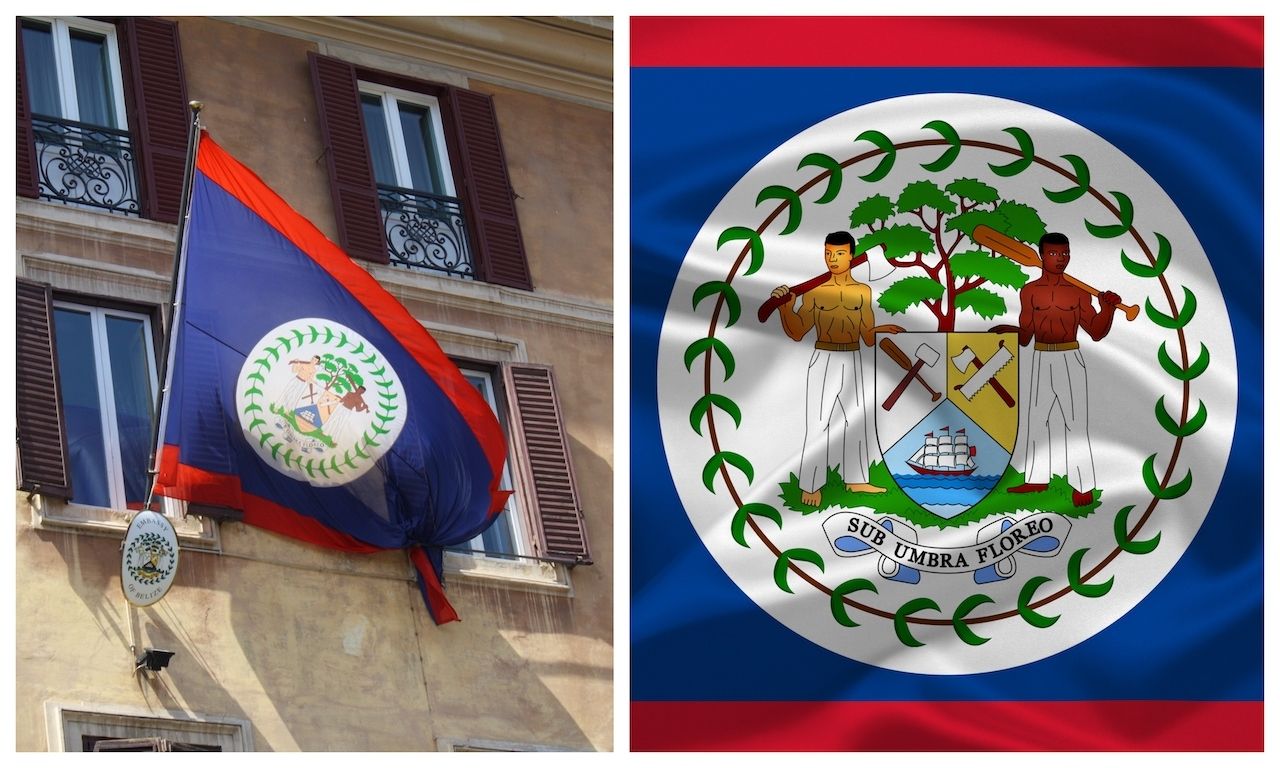 The national motto of Belize is one we can all get on board with: Sub Umbra Floreo (“Under the Shade I Flourish”). It’s featured prominently on the country’s flag, underneath two woodcutters, which symbolize Belize’s logging industry. Unlike many flags, which simply showcase stars and stripes, Belize’s national flag is more like a still-frame from a movie, or a work of art. It’s the only flag to have people featured as a major design element. The two figures, one of African descent and the other of mestizo (American and European) descent, showcases the country’s diverse cultural heritage, while the dozen other colors and shades make the flag one of the most colorful in the world. 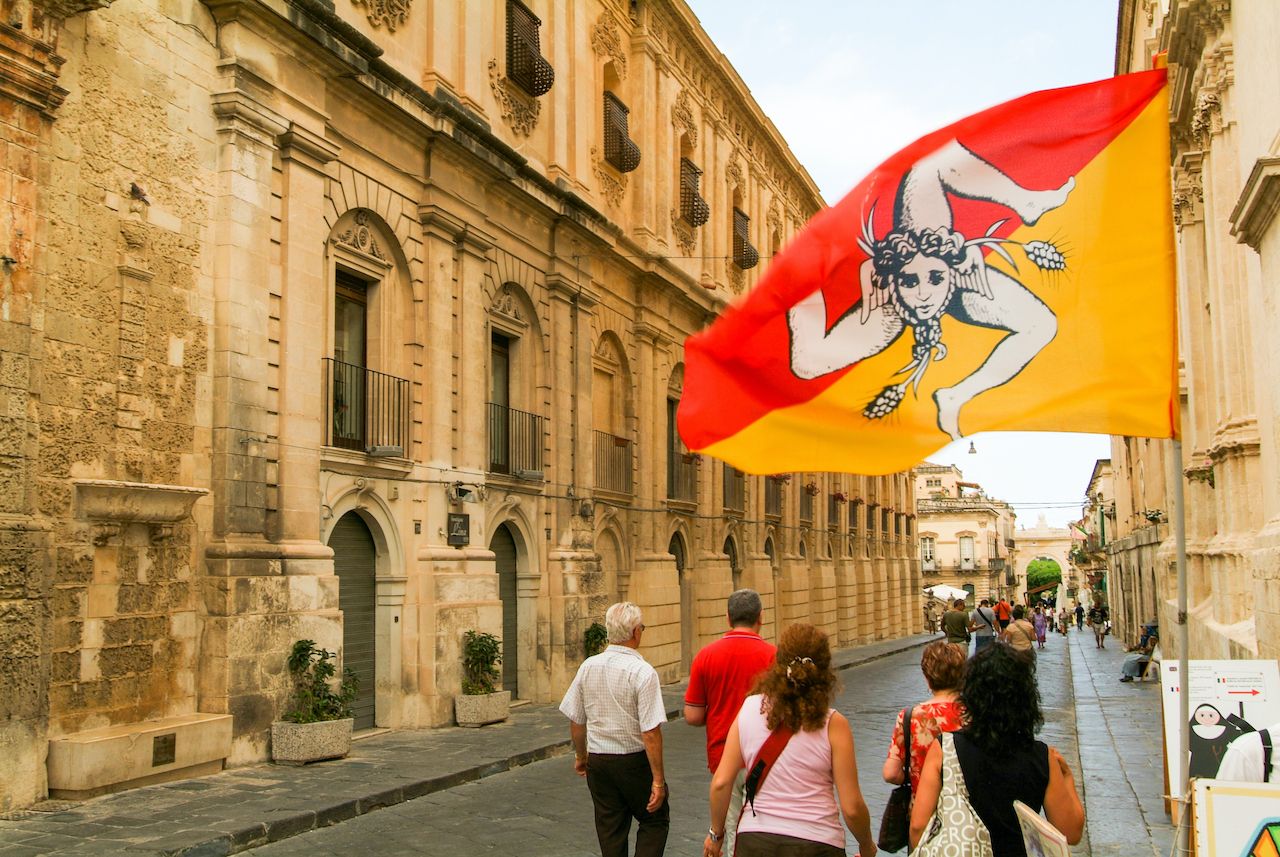 Sicily’s flag also features a mythological creature. Although Sicily isn’t technically an independent country, its distinct culture separates the island from the rest of Italy. This is evident in its flag, sliced diagonally into equal red and yellow parts, with a three-legged Medusa head staring ahead. The three legs are said to represent Sicily’s triangular shape, while the creature’s ears (made of literal ears of corn) are a nod to the island’s fertility.

Art + ArchitectureThe 7 Coolest Currencies in the World and the Stories Behind Them
Tagged
Culture
What did you think of this story?
Meh
Good
Awesome