Given the heatwave that is currently enveloping much of the United States and Europe, we know we aren’t the only ones ready to hop on a tube or jump into a lake. According to Eldorado Weather, Phoenix, Arizona, hit 109 degrees on July 22 while Granada, Spain, hit 105. In this light, we have both bad news and good news for you. First, the bad: It’s hot outside, and forecasts don’t look to cool down anytime soon. In Britain, for example, forecasters expect the hottest start to August since the 1800s, according to Express.

The good news is that lazy rivers, undoubtedly one of mankind’s best inventions for combatting such heat, continue to get better and better. We question the sanity of anyone who shames the tranquil act of just lying there, legs flopped over an inner tube and arms flailing to keep balance as you circle around a tubular hunk of plastic. It doesn’t even matter how old you are. Lazy rivers are epic, and these are the best of the best to cool off in this August and beyond — because there’s no telling how September will fare either. 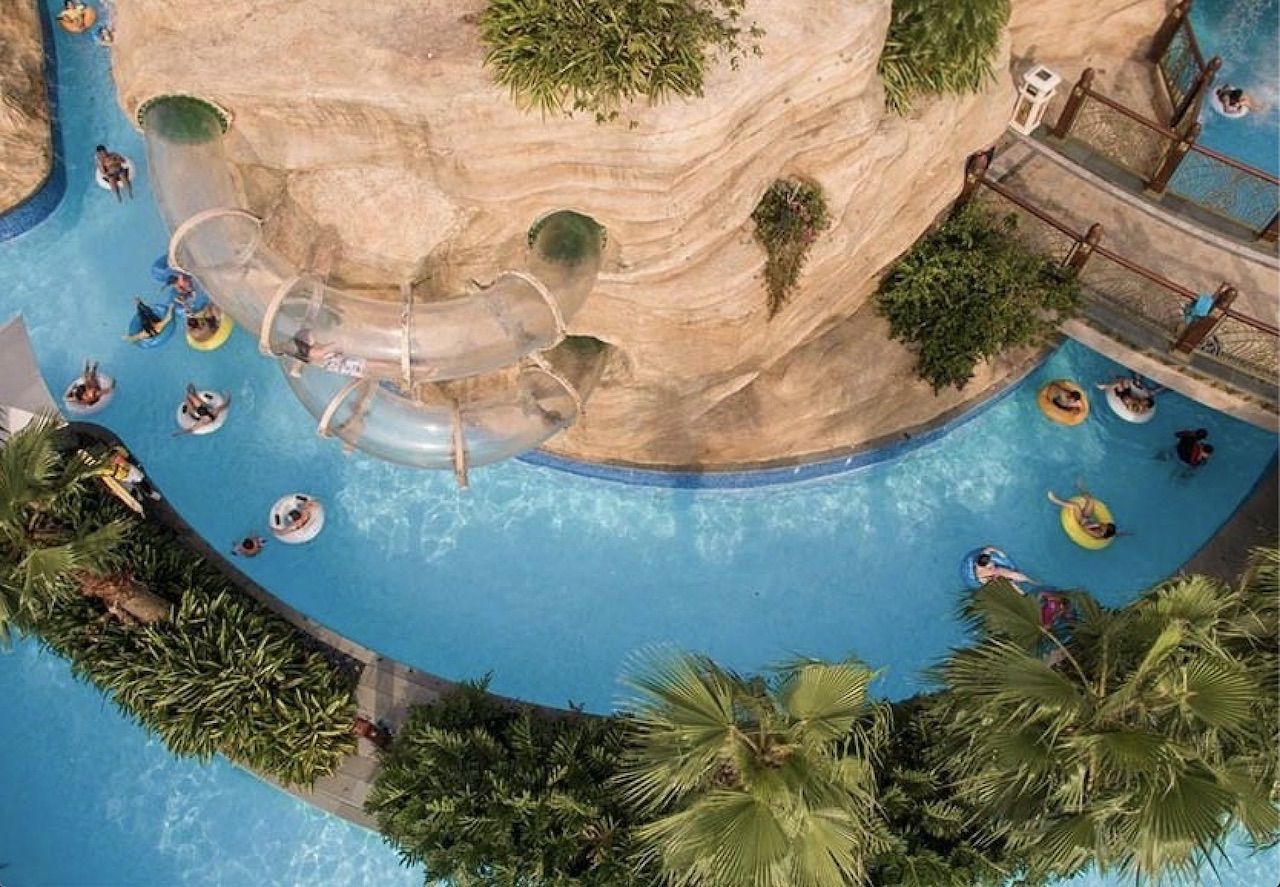 In the grand tradition of one-upmanship that gambling-driven resort cities like Las Vegas and Atlantic City have employed for decades, nearly every new construction project in Macau is designed to break some kind of record. Galaxy, a massive consortium of luxury hotels, shopping, and general revelry in the historic neighborhood of Coloane took the city’s muggy climate into consideration and included a massive waterpark-meets-forest-walk-meets-beach resort on top of the lobby.

It’s home to the world’s longest Skytop adventure river ride, an eccentric title for the lazy river that stretches nearly 1,900 feet across the complex. The lazy river is accessible via the park entrance inside the Hotel Okura and is free to guests staying in the hotel or at any of the five properties within the Galaxy complex. If you aren’t a guest, expect to pay MOP 568, about $70, but keep in mind this gives you access to everything in the park. And because it’s Macau, the Grand Resort Deck is done up like a full-on amusement park complete with three water slides, a white-sand beach with a waterside bar, and a wave pool that you can actually surf on (board rentals available). Take that, Six Flags. 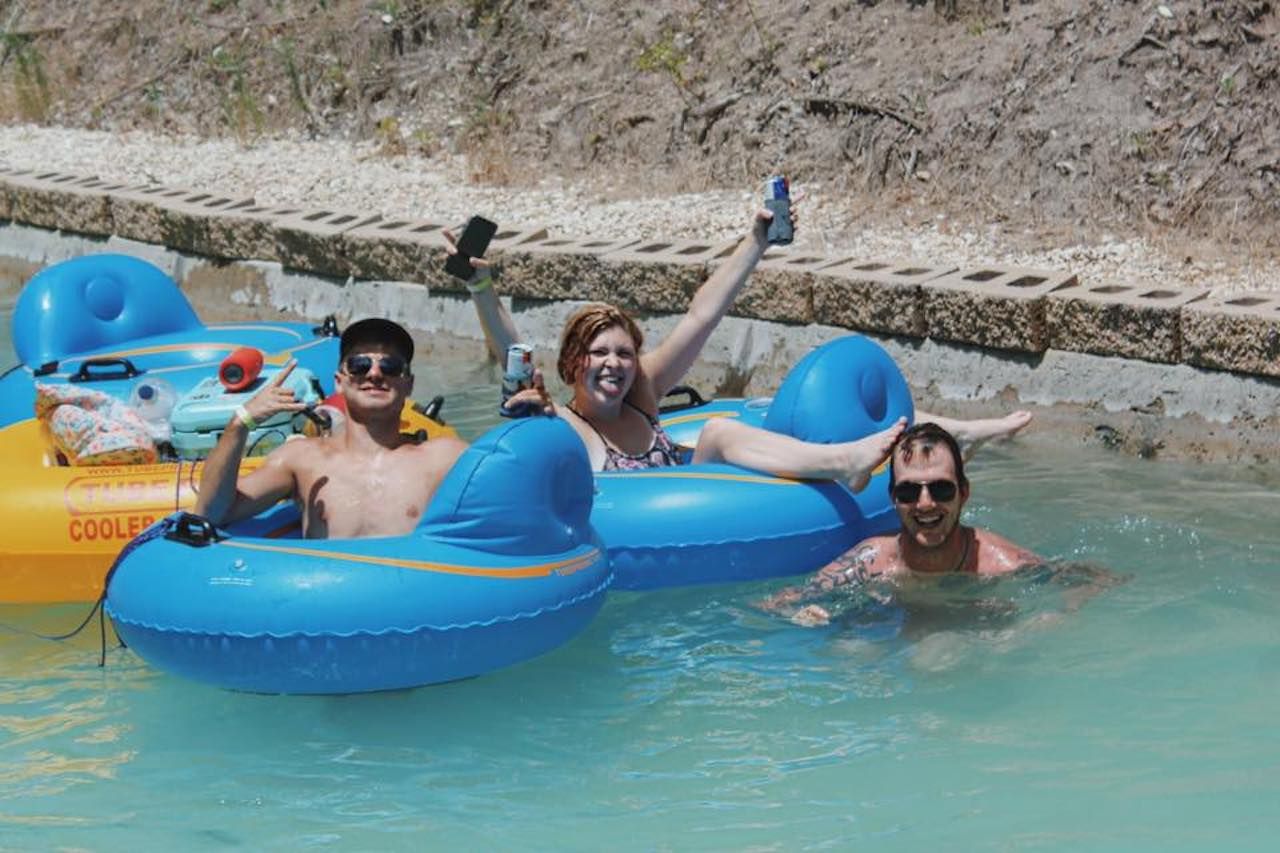 One of the most well-known attractions in Waco, Texas, is the world’s longest lazy river, located within the BSR Cable Park. It may not be located on a rooftop like the one in Macau, but this one stretches for a full mile — 5,280 feet — and hosts significantly more adults than screaming kids, a true rarity among water parks. The park is also BYOB, and you can actually rent a cooler to take with you on the river — so even your buddy who thinks he’s too cool to ride a brightly colored tube through a park lined with picnic lunchers just lost any reason to not show up. Beyond the lazy river, the Royal Flush water slides shoot riders into the air before plunging down into the pool and necessitate signing a waiver to ride, probably a good thing to do before you hit the inner tube and crack open a cold one. 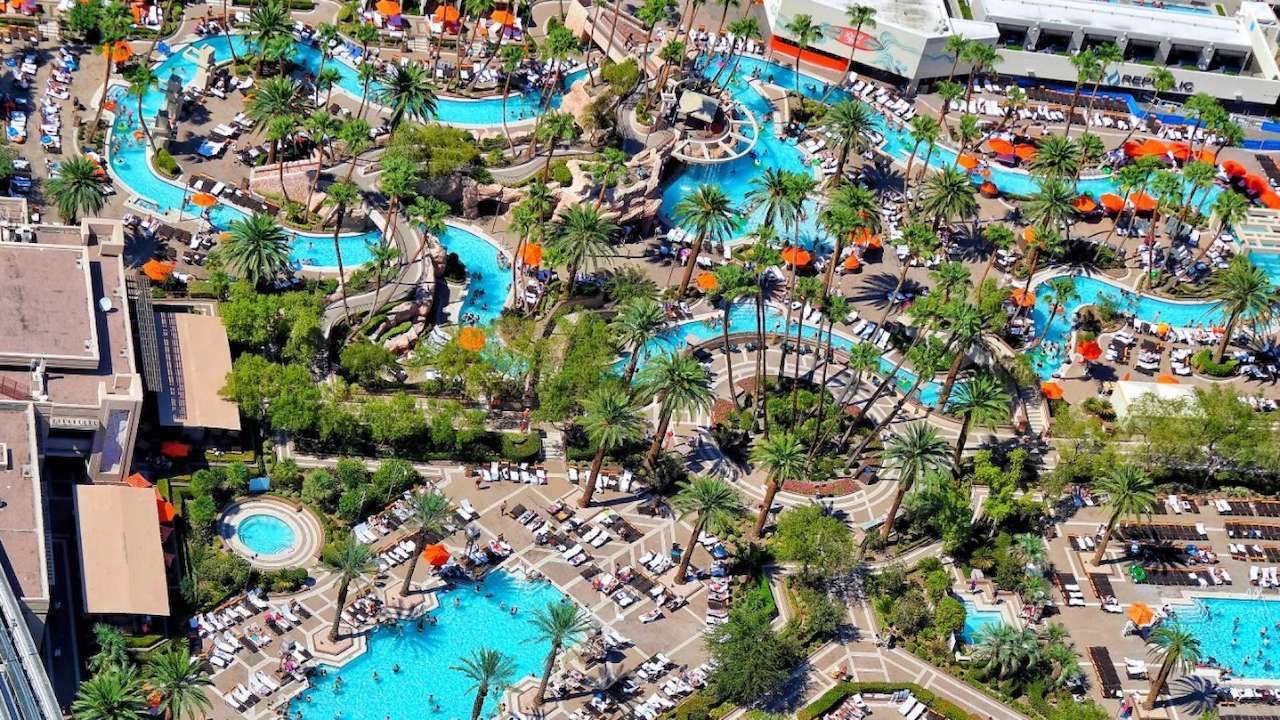 Backlot River, part of the Grand Pool Complex at the MGM Grand, is uniquely Vegas. By that, we mean that it’s more like a clubbing experience than a relaxing float across a controlled jet current. The ride is adjacent to the West Republic Ultra Pool, which hosts DJs on weekends and is the type of place where those who never actually made it back to their hotel room the night before tend to end up. The river itself is 1,000 feet of winding, tropical bliss complementing the private party cabanas and sunbathers parked along its side. Oh, and no kids are allowed — so the fist-pumping can continue uninterrupted. 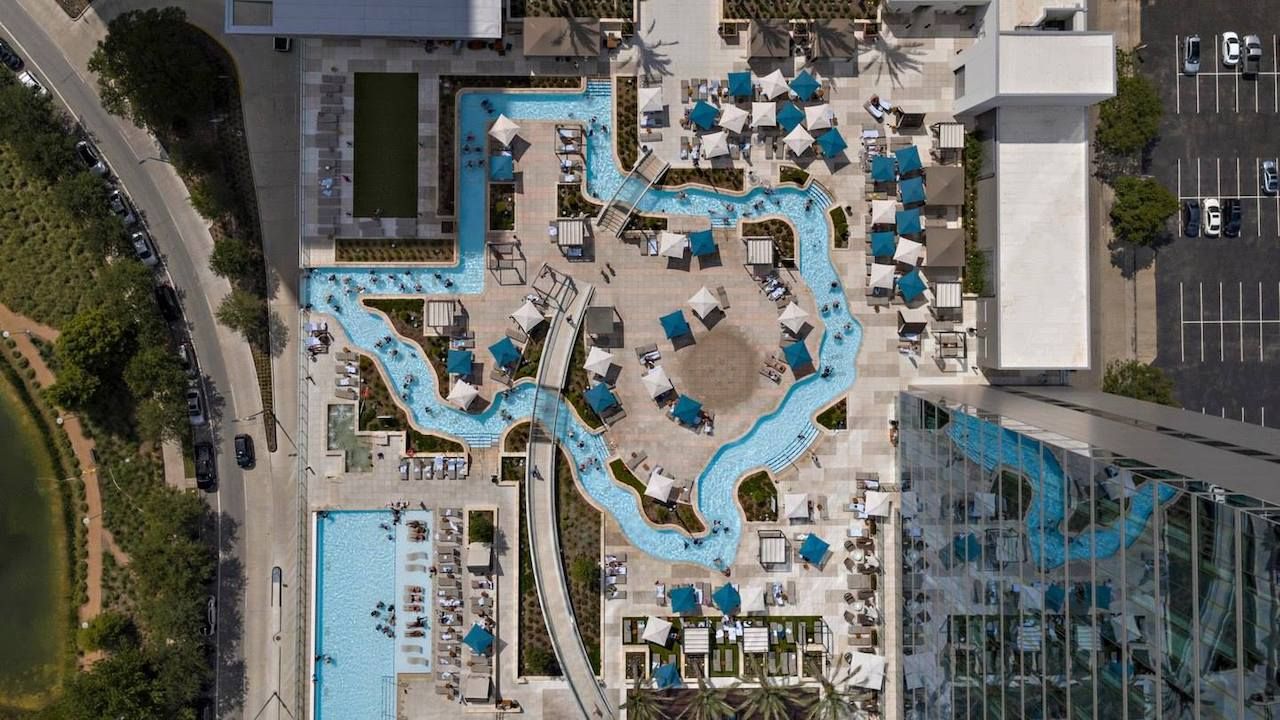 The draw to the lazy river at Houston’s Marriot Marquis is that the course is shaped like Texas. Regardless of whether you have ties to the Lone Star state, the ride is super mellow, and the deck both surrounding the river and within its confines tends to get festive in the evenings, with both locals and hotel guests letting loose on the surrounding Parkview Terrace. In addition, the views of Houston are just as impressive as the lazy river itself — and may induce vertigo if you gaze out too quickly after getting off the river. 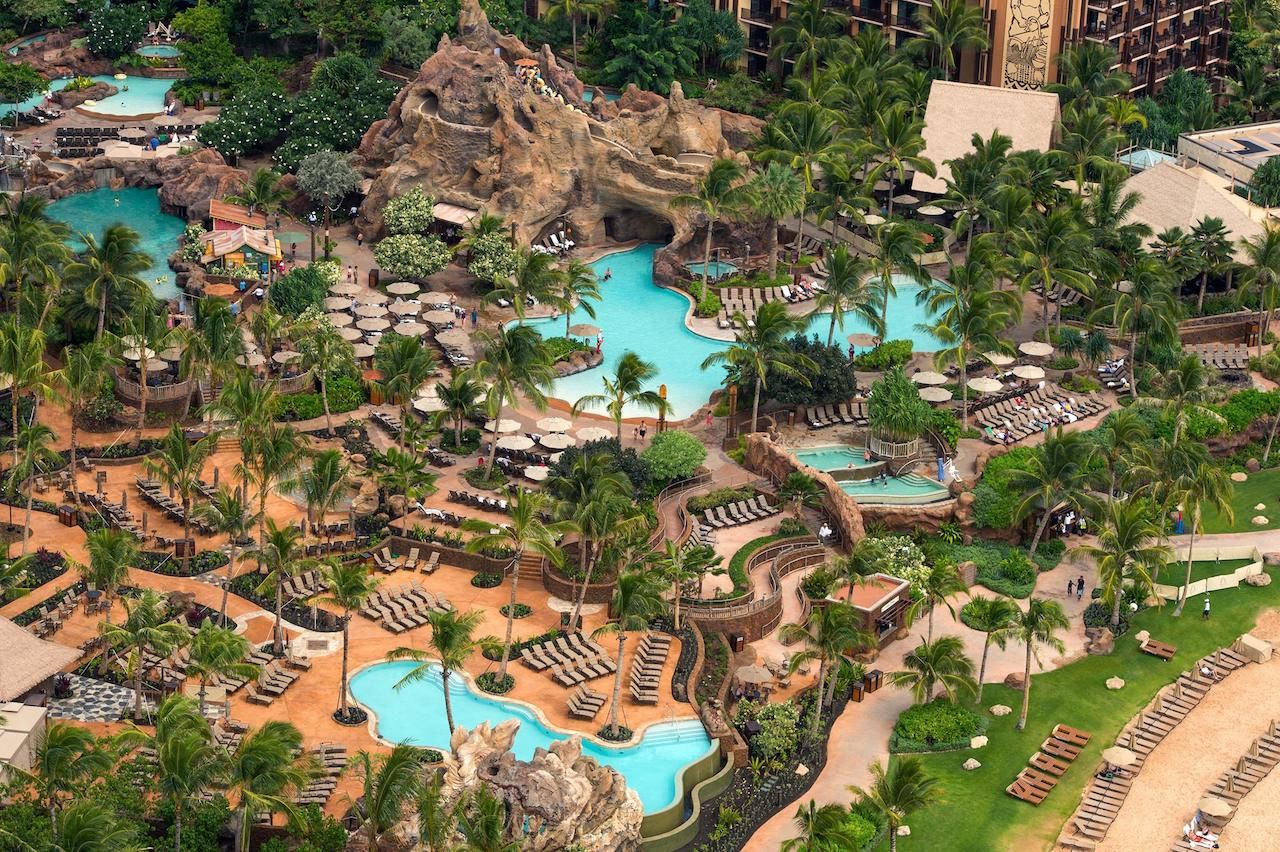 Alani, a Disney resort on Oahu, Hawaii, has an incredible lazy river for families. It’s not the longest, nor the most extreme, but it is the most fantasy-like. Where this ride shines is the man-made volcano that you pass through en route. If Indiana Jones was seven years old when he was tasked with protecting the Ark of the Covenant, the film set would have looked a lot like this ride. There are some hazards along the way — splashing fountains, mostly — but these can be avoided with a few quick paddles towards the opposing wall. It’s the perfect pre-Luau activity. 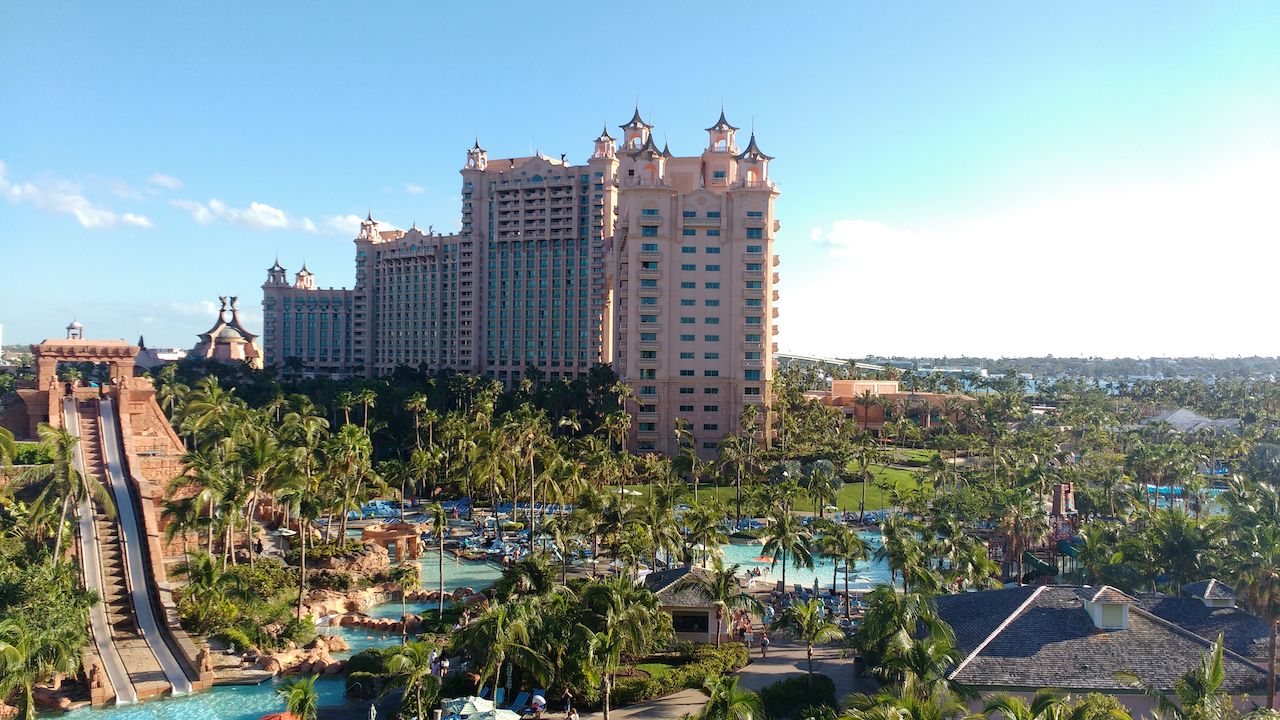 The Current is one of two that make the list for most closely resembling an actual river-tubing experience. Located within the Aquaventure waterpark at Atlantis Paradise Island in the Bahamas, The Current sends you over rapids and down seven-foot drops at a speed that falls somewhere between lazy floating and whitewater rafting. As a tip, don’t approach the big drops and rugged rapids straight-on; come in at an angle and use your body weight to keep yourself balanced on the tube. Probably best to not chug a bunch of daiquiris before riding this one, though there’s also a more mellow lazy river if you’re just looking to chill. 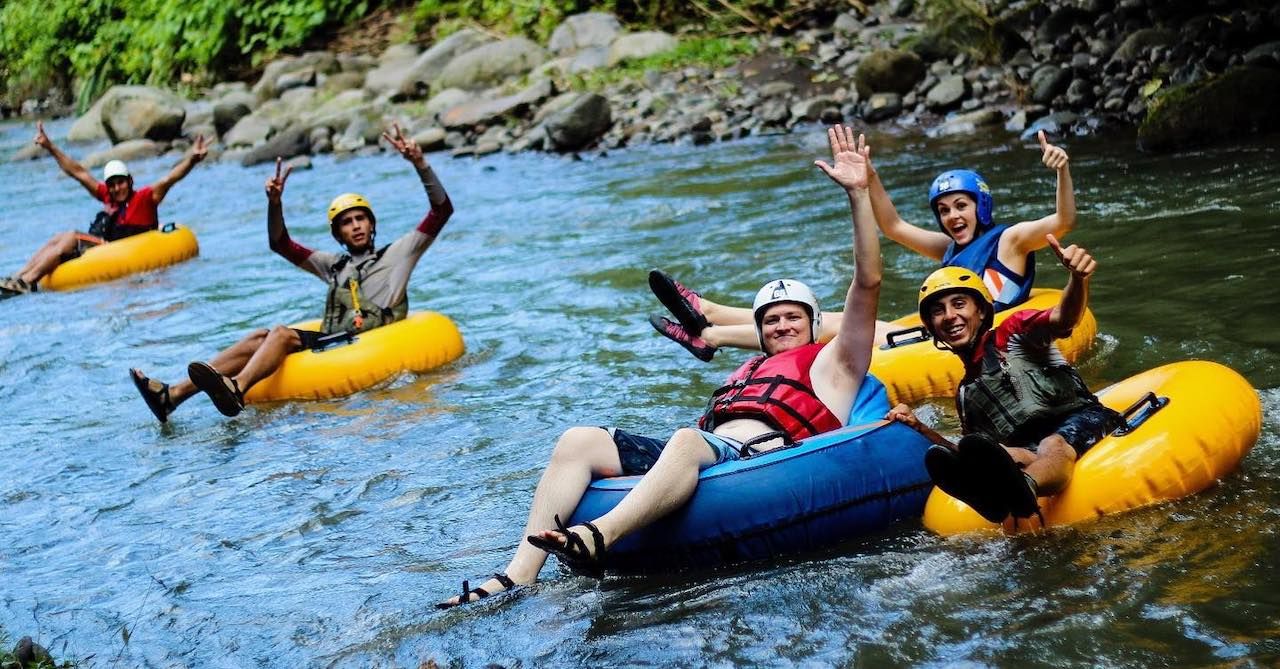 The Springs Resort in Costa Rica ups the ante even more by requiring riders to wear a helmet and life jacket as they coast through the Arenal River at Club Rio, just below the resort. The course is controlled and monitored, but you’re tubing on an actual river complete with fish and kayakers. There are some light rapids but nothing that requires the exertion of too much effort. Put-ins and take-outs are clearly marked, so don’t get too lazy and miss getting off the river at the right spot. Run either the full half-mile course or just the lower section, which never leaves the view of onshore onlookers. After you get out of the water, there’s fishing, a climbing wall, plenty of hiking, and horseback riding on site, as well.

Technology + GearEverything You Need in Your Pack To Travel To Southeast Asia
Tagged
Theme Parks Trip Planning
What did you think of this story?
Meh
Good
Awesome