There’s a dizzying number of types of German sausages. To name a few: bratwurst, bockwurst, knackwurst, blutwurst, weisswurst — and the list goes on. By some accounts, there are more than 1,500 different kinds of wurst (sausage) in Germany. In Berlin, however, there is one kind of wurst that locals and tourists alike have deemed to be the best: currywurst. And it never would have come about if it weren’t for the British occupation after WWII and an enterprising street vendor.

Currywurst is a street-food favorite made of pork and served either mit (with) or ohne darm (without skin). It’s sliced into bite-sized pieces and smothered in house-made curried ketchup that can have either an intense tomato flavor or be sweet and tangy. The sausage is usually served with a gleaming portion of French fries or a brötchen (bread roll). The final touch that all currywurst has in common is a sprinkling of curry powder. This all comes piled on a plate for around four euros ($4.50).

In all, currywurst is an amalgam of cultures — tomatoes from America, sausage from Germany, and curry powder spices from India. New food, especially food that combines different influences as currywurst does, can help cultures connect. That was the case with the invention of currywurst in 1949. 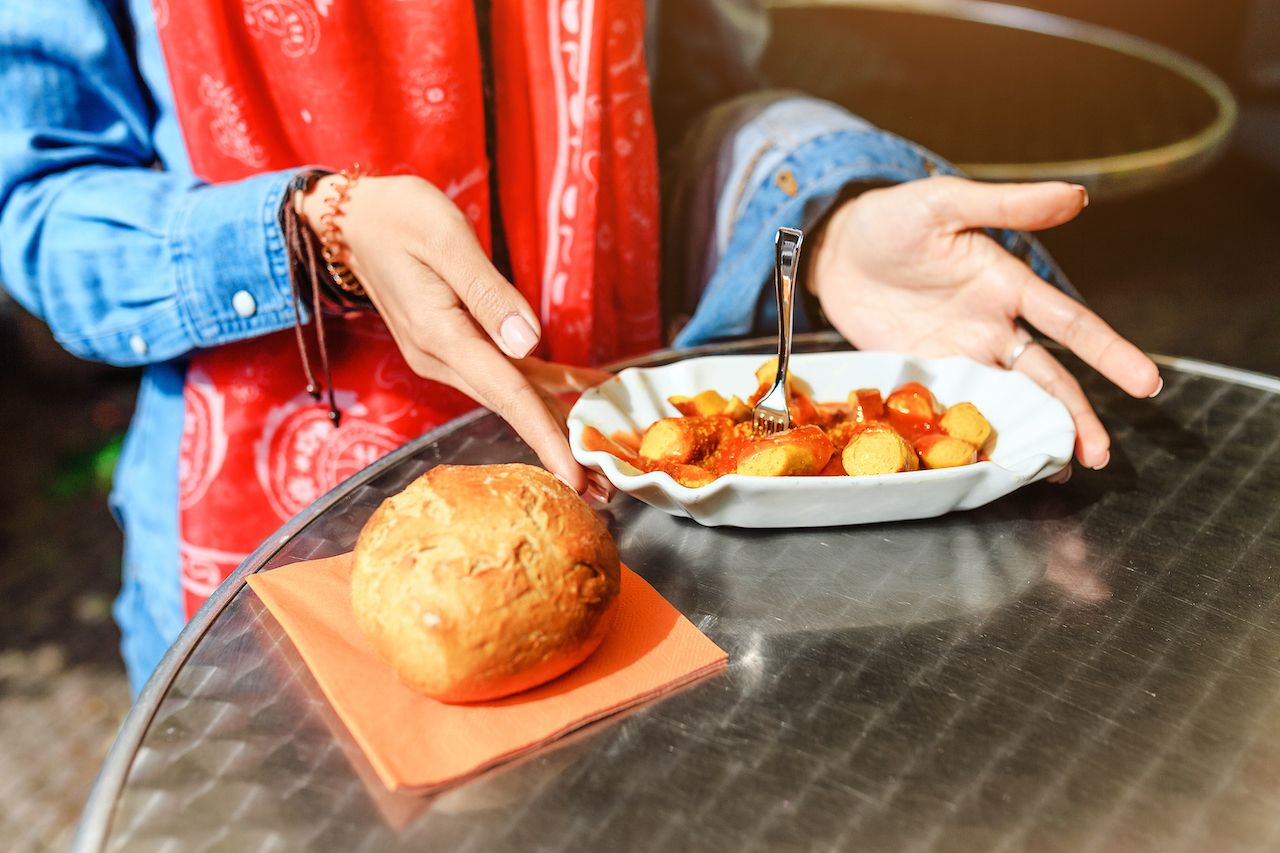 According to the Currywurst Museum, the snack was invented by Berlin street vendor Herta Heuwer. She was selling sausages in the British-occupied section of Cold War Berlin when she struck a deal with the soldiers stationed in the city. If they gave her ketchup to pour over her sausages, she’d trade them alcohol, so the legend goes. The British also had a mix of Indian spices, and through an unknown series of events, Heuwer started sprinkling the spices over the ketchup. This was the beginning of a tale of female entrepreneurship that led to the creation of contemporary Berliner’s most beloved street food.

British laborers were loyal to currywurst due to its high protein, taste, and cheap price. Heuwer opened multiple shacks to sell her creation, and other vendors built off her success. Eventually, flavor won out and currywurst broke free from its working-class roots to be consumed and loved by everyone. Now, you can find currywurst around the world. Few people adore it as much as Berliners, though. The Currywurst Museum, which recently ended a 10 year run in Berlin to start a traveling museum, estimates there are 800 million portions of currywurst eaten in Germany every year and 70 million portions eaten annually in Berlin alone.

Heuwer sizzled her last Currywurst and closed up her sausage shop on June 30, 1979, but you can still treat yourself to a Currywurst at one of the over 2,000 stands that continue to operate in Berlin today.

The best places for currywurst in Berlin 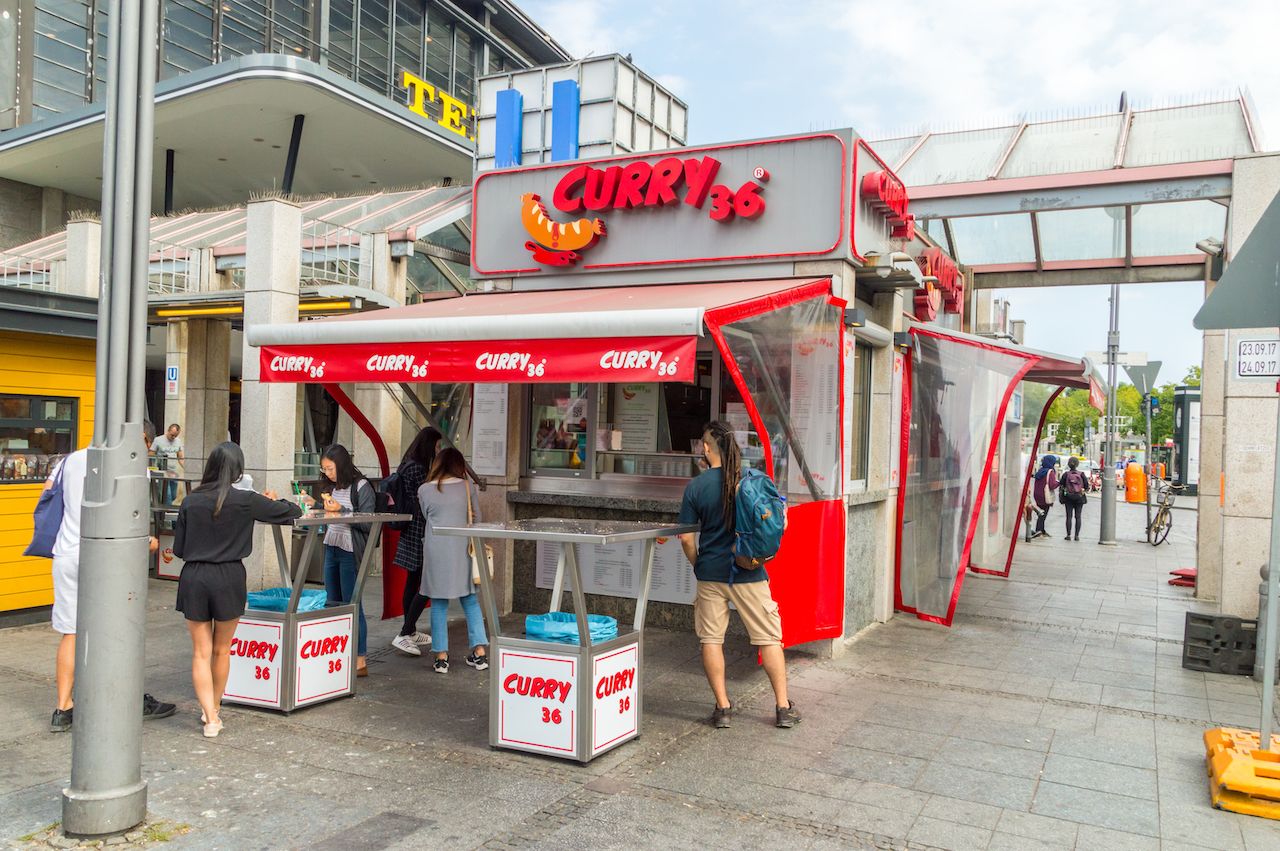 Given its immense popularity, Currywurst is sold almost everywhere in the German capital. You can find it at fast food joints, street-side kiosks, and even ordinary restaurants across the city. You can enjoy it on top of the famous TV Tower at Alexanderplatz or right at Tegel airport when you arrive. Wherever you find yourself in Berlin, you’ll find people enjoying currywurst both day and night, lining up for the fare or huddled around the high-top tables by the city’s sausage vendor kiosks. 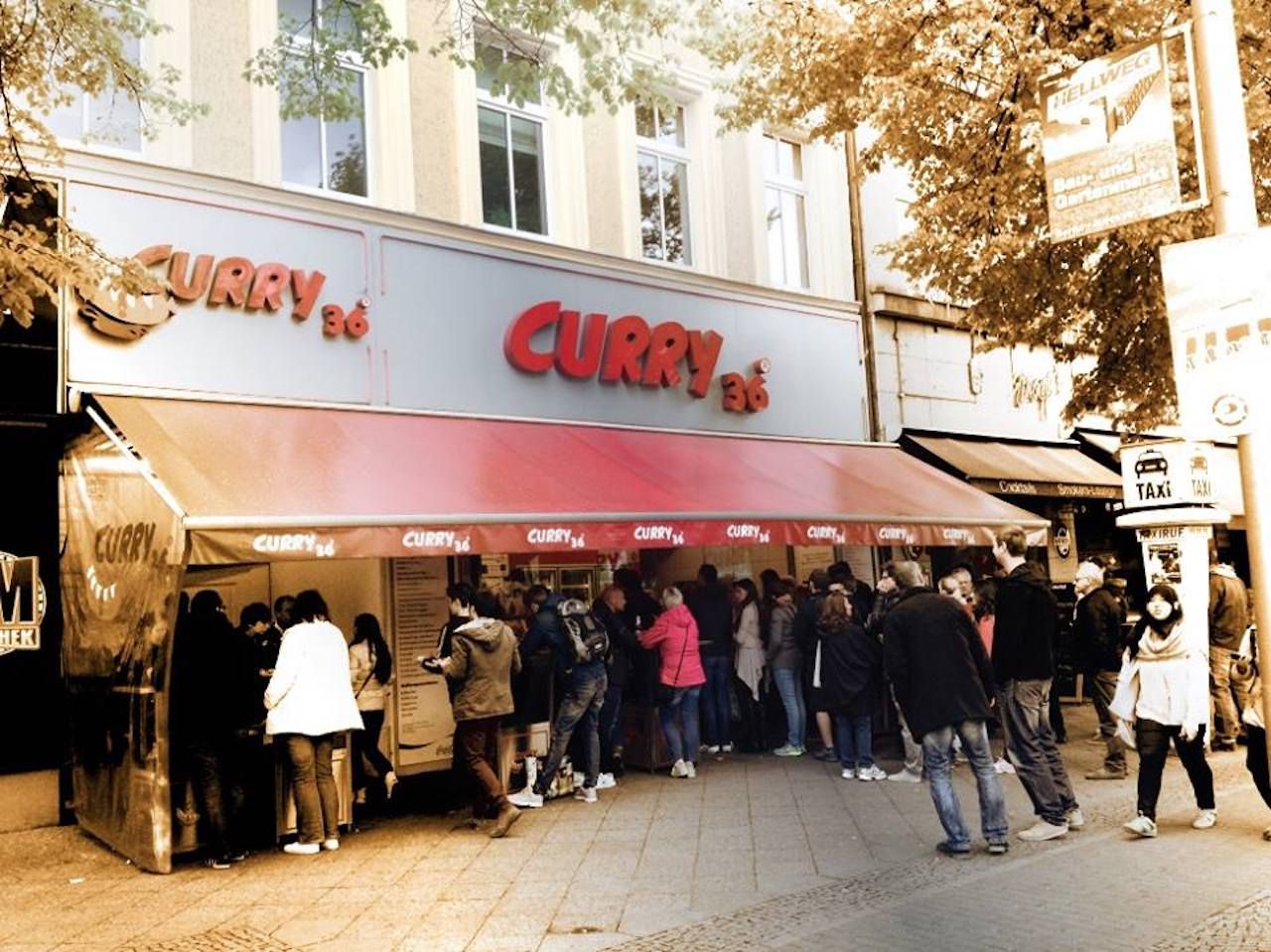 Curry 36 is a favorite for both Berliners and tourists alike. With multiple locations spread across the city, this kiosk makes currywurst available to you wherever you are. The motto, “From Breakfast to Sunrise,” is taken seriously, and the stands are open nearly around the clock to provide for all of your sausage-eating needs. There’s both classic currywurst and a vegetarian option.

One of Berlin’s best-kept currywurst secrets can be found just outside the entrance to the Gesundbrunnen train station in Moabit. This sausage stall looks like every other stand in the city, but a true currywurst connoisseur wouldn’t miss it. Curry-Baude has been around since the fall of the wall in 1989 and is a favorite of local residents. Run by Reina Lehmann, a skilled butcher with a well-established butcher shop, Curry-Baude offers homemade sausages served up with its coveted family ketchup recipe. 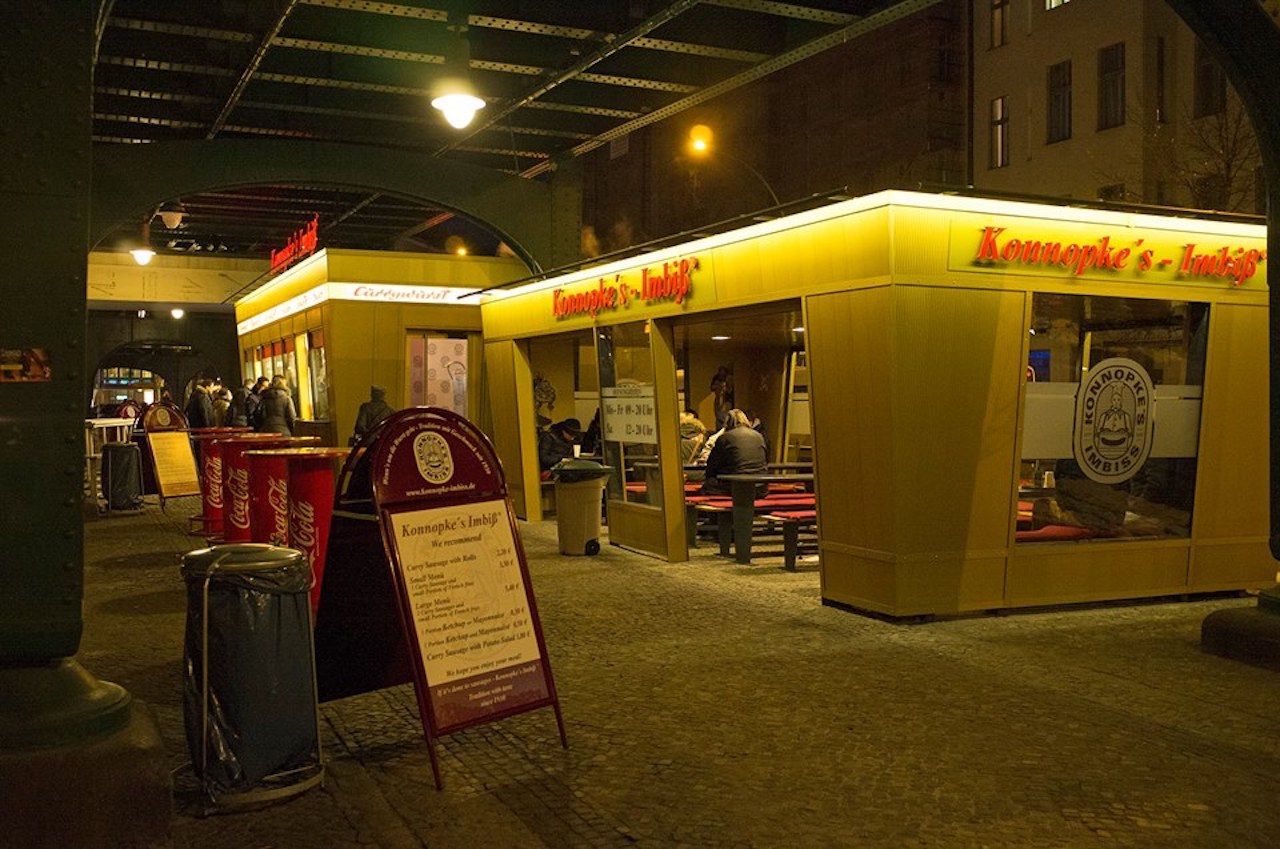 This popular snack stand has been in operation since 1930 and is found underneath the railway tracks at Eberswalder Station in the Prenzlauerberg district of Berlin. Konnopke’s Imbiss serves up many other German classics, but it became legendary among locals because it was the first place you could get currywurst in East Berlin in the 1960s. The stall remains a local favorite today. Both the stand’s vegetarian and vegan versions of currywurst taste pretty darn close to the traditional pork version.

If you’re looking for an organic and eco-friendly option for your currywurst cravings, Witty’s is the place for you. The chain proudly displays its various eco-certifications at each kiosk, and all of the products — from the sauces to the coconut oil — are 100% green. Along with your currywurst, you can enjoy Belgian-style fries made from an organic and regional variety of potatoes. The original location of this fast food joint can be found at Wittenbergplatz in Charlottenburg, but you can also visit their kiosk at Schönefeld Airport for one last bite of the Berlin delicacy before you leave the city. 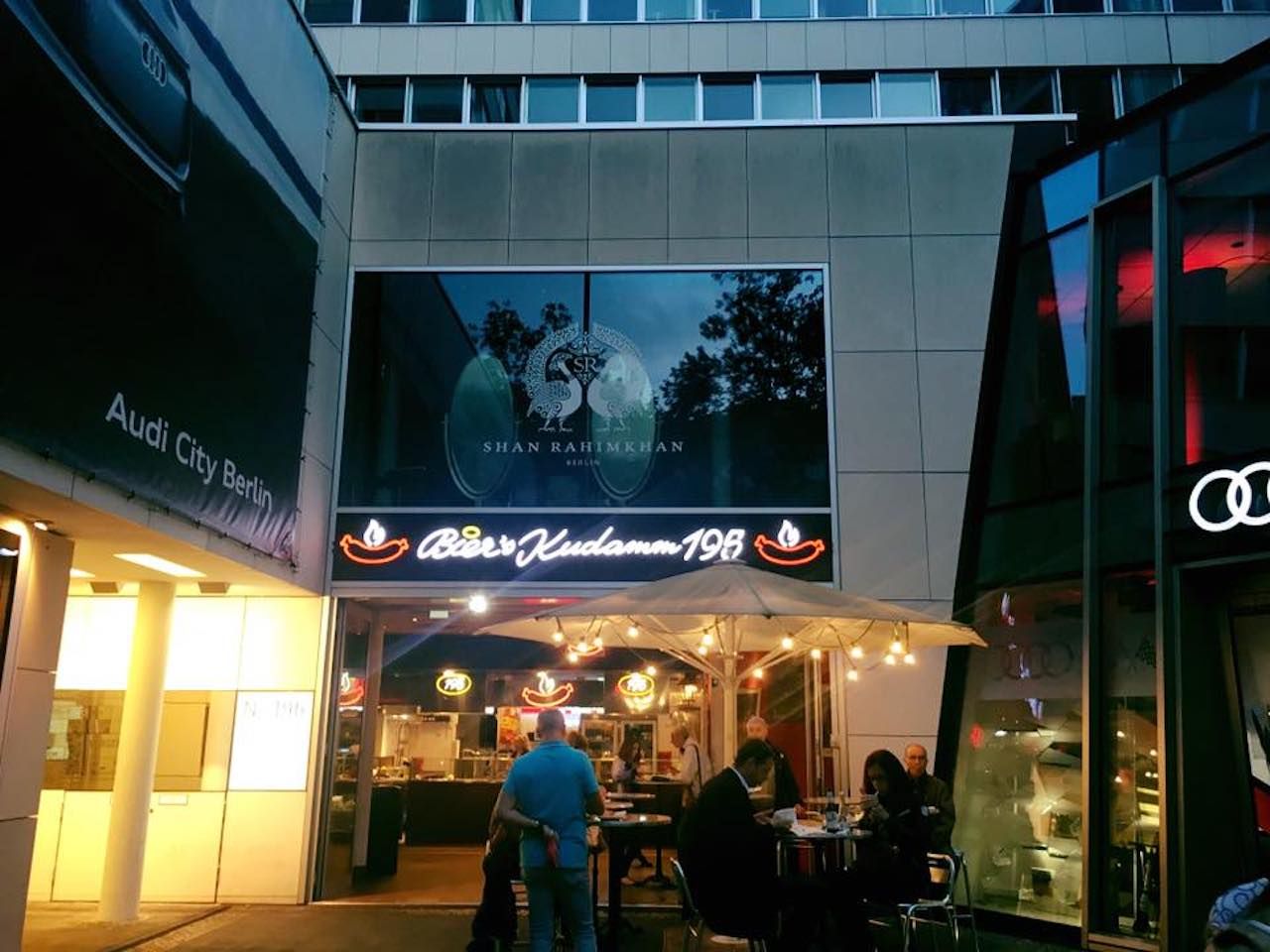 If you’re looking for the classiest version of the Berlin street food, wine and dine at Bier’s Kudamm 195. Located on Berlin’s most famous shopping street, the kiosk is nestled between top designer boutiques and other high-end stores. Instead of using paper plates, Bier’s Kudamm serves Currywurst on porcelain, and your meal can be accompanied with a glass of sparkling wine or a bottle of Champagne. Celebrities and wedding parties have been known to frequent this establishment.