If you’ve ever watched the Christmas-themed rom-com The Holiday, you’ve probably been gripped by the urge to leave your job behind, abandon the hectic urban energy that permeates your everyday life, and retreat to a cottage in a cute English village. While quitting your job on whim may be a dream that’ll never come true, renting an adorable little house in the English countryside is much easier than you think. England is full of adorable villages, and plenty of them are under three hours by train from London. Check out these seven cute English villages and start planning your cozy escape. 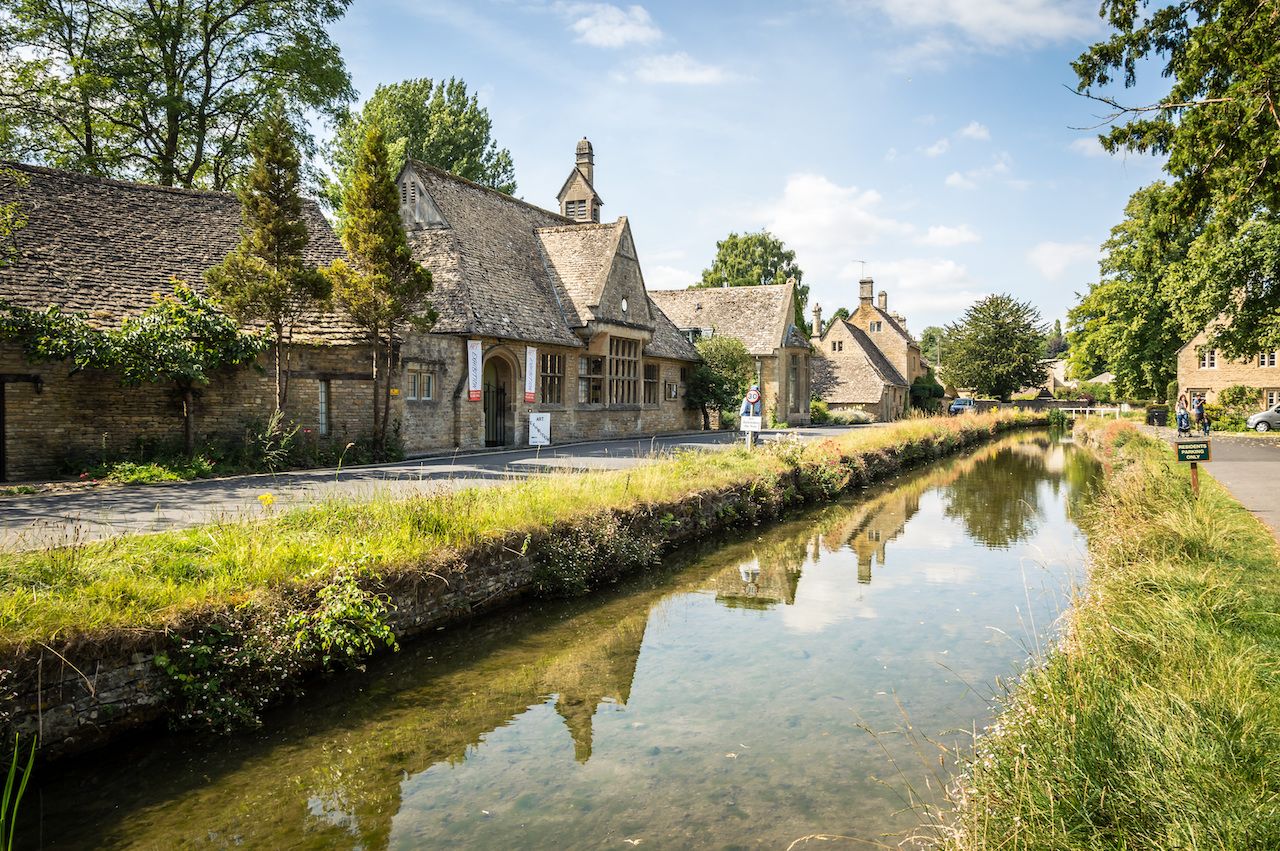 Much more visually appealing than its name suggests, Lower Slaughter is known for its limestone cottages and Old Mill (an old flour mill), which made an appearance in the 1086 Domesday Book — a famous survey of England’s land holdings. It’s also home to the River Eye and Copse hill Road, which was voted the most romantic street in the UK in 2011. Spend the day strolling along the river, crossing its historic footbridges, visiting the 12th century church of St. Mary, or tucking into some Gloucestershire sausages at The Slaughters Country Inn.

Population: 236
Where to stay: Three-bedroom renovated cottage on a quiet residential road with views of open fields. $407 per night. 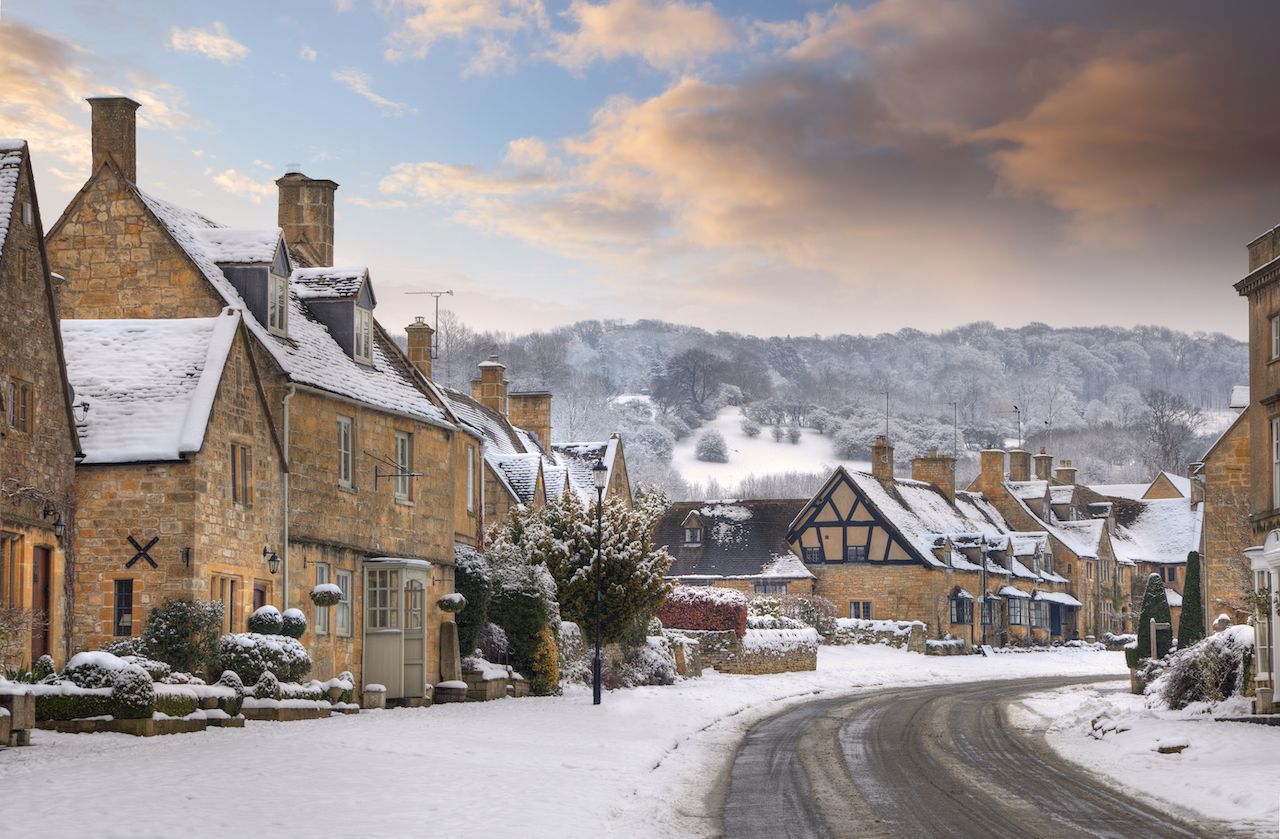 Strolling down the streets of Broadway, England, is a very different experience from walking down Broadway, New York City. A classic cute English village with limestone houses, quiet streets, dark pubs, and family-owned shops and galleries, Broadway is often referred to as the “Jewel of the Cotswolds” (a rural and notably picturesque region of southeast England). Besides admiring the postcard-worthy houses on Upper High Street, make sure to check out the Millenium Garden next to the Broadway Museum and Art Gallery. The garden has great views of the hills. For even better views, however, head to the top of the 18th-century Broadway Tower, which was built on the orders of Lady Coventry to determine if a beacon on this hill could be seen from her house 22 miles away. The tower, which can be climbed for a $10 fee, overlooks the countryside of the surrounding 16 counties.

Population: 2,540
Where to stay: Orchard Cottage is a thatched, timbered cottage on a quiet road, next to pubs, shops, and restaurants. $415 per night 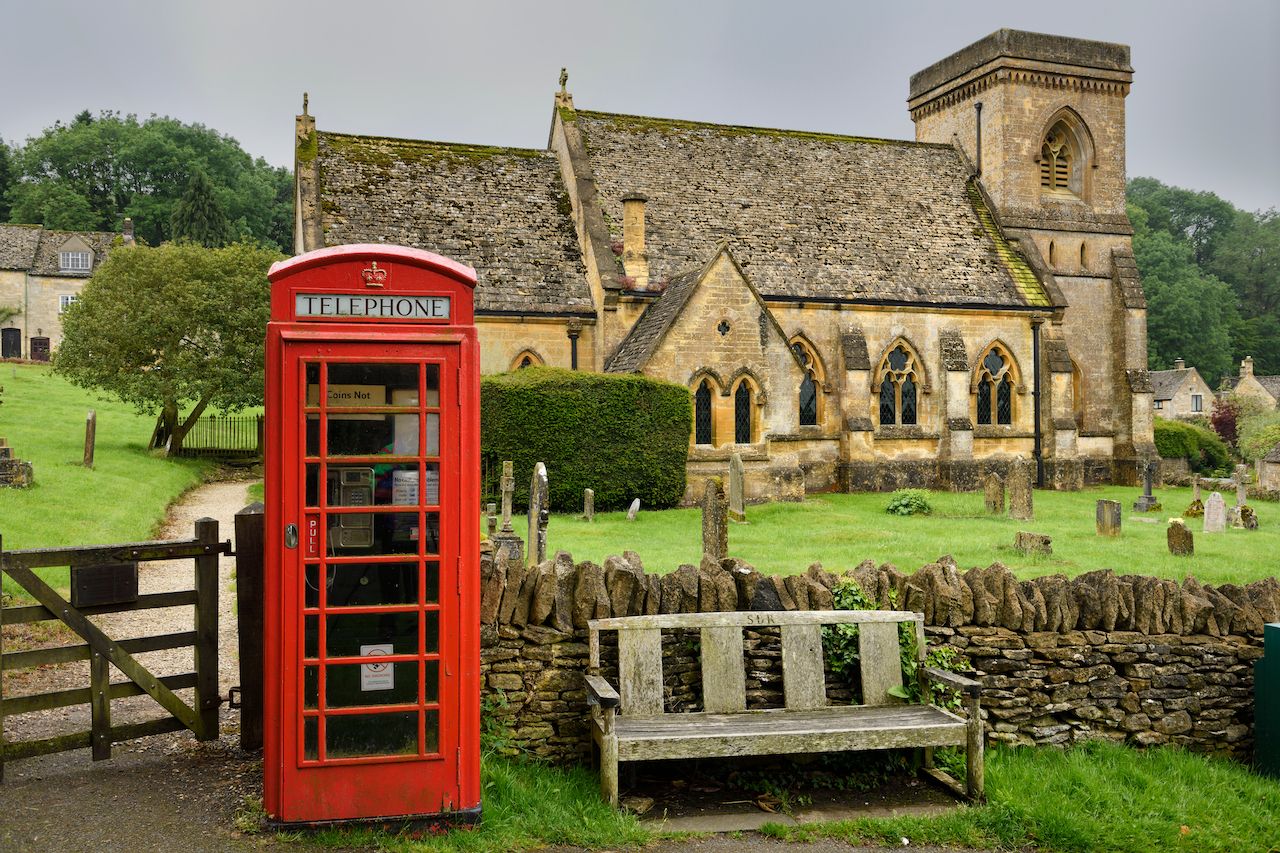 Snowshill is known for its stone cottages, grand Victorian church, and Snowshill Manor — a National Trust property containing poet Charles Wade’s vast collection of toys, furnishings, and musical instruments. The manor sits at the opposite end of a lavender field, which brightens up Snowshill with vibrant color in the summertime, while winter sees the same fields blanketed in snow. It’s also a great base for hiking the many walking trails around the Cotswolds countryside.

Population: 164
Where to stay: Willow Vale is a terraced cottage conveniently located in the heart of Snowshill. $459 per night. 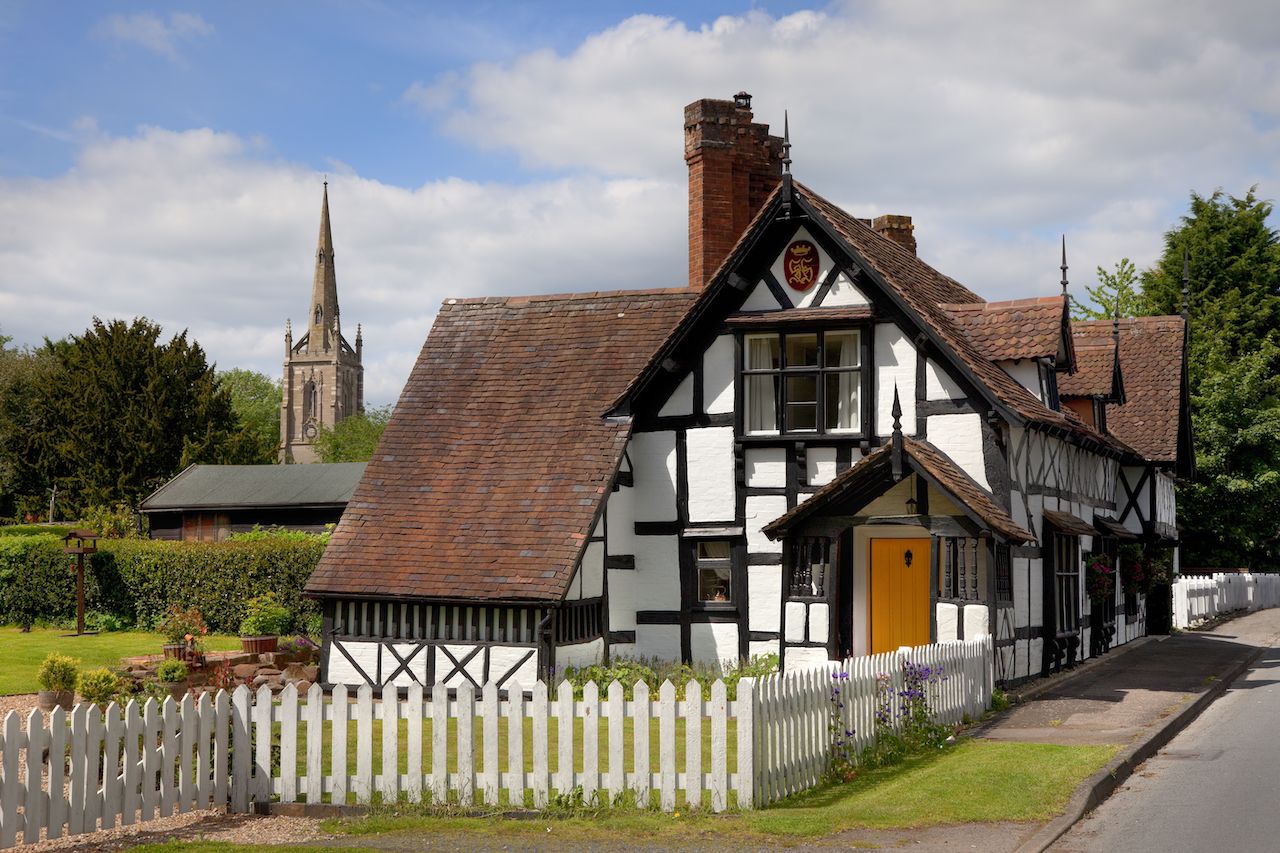 Ombersley is defined by its half-timbered houses, setting it somewhat apart from the stone aesthetic that defines many of the previous cute English villages mentioned here. It’s also located between the scenic Malvern Hills and Shropshire Hills, which are both Designated Areas of Outstanding Natural Beauty. In addition to the area’s beautiful landscapes, there are plenty of pubs and family-owned shops to keep you busy. You can even visit the Hawford Dovecote (a nest for domesticated pigeons) just a few miles south of town that has been untouched since the 16th century.

Population: 623
Where to stay: While there is no timbered home available on Airbnb to rent in Ombersley, this Georgian country home, at $275 per night, is just as lovely. 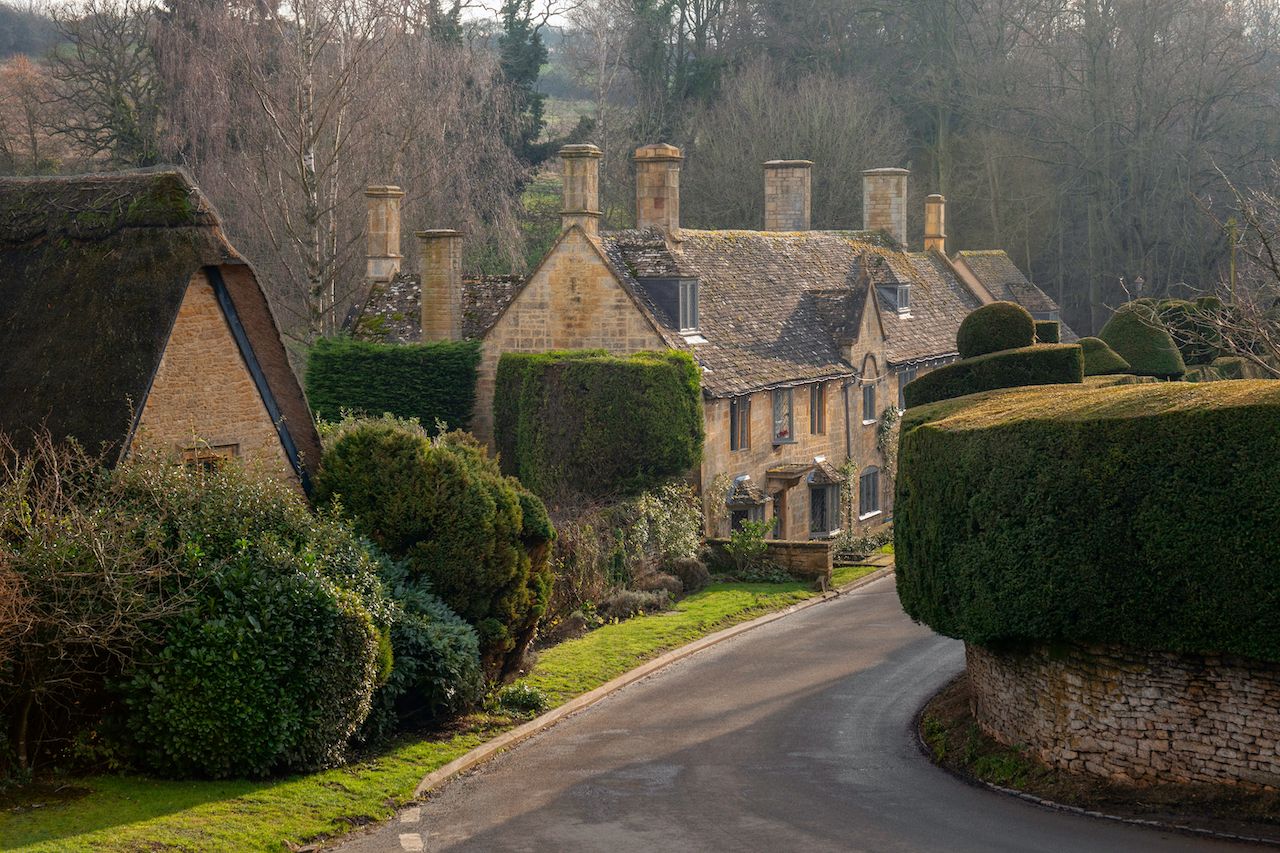 Broad Campden is home to a rare Friends Meeting House — a Quaker place of worship — that dates back to the 17th century, and has the distinction of being the oldest continually-operating meeting house in England. The town also has a small church with a unique round bellcote, and is defined by its thatched cottages.

Population: 100
Where to stay: This historic two-story cottage is a converted stone stable built in 1797. $241 per night. 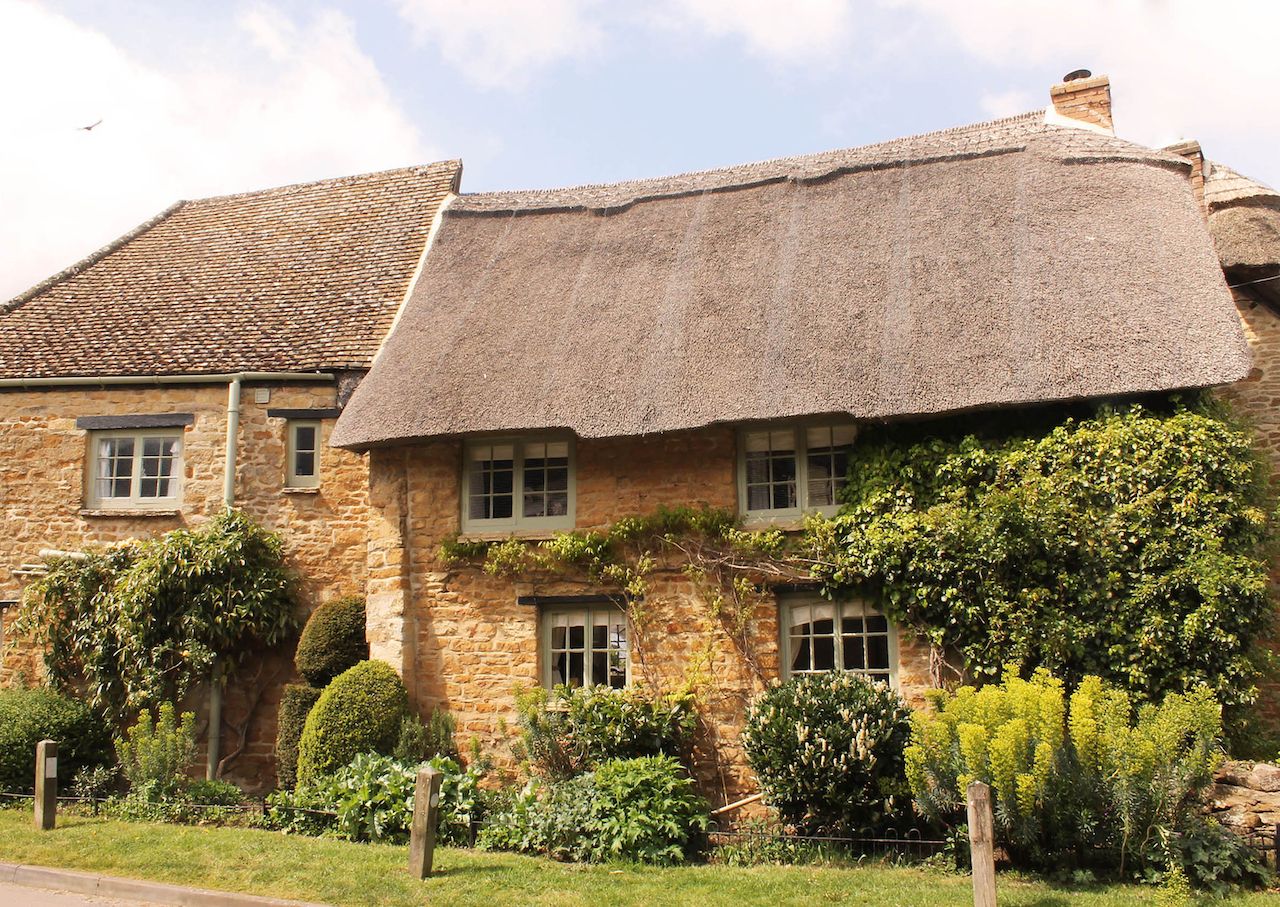 Kingham was named “England’s Favorite Village” in 2004, and it’s easy to see why. The small village is located in the bucolic Evenlode valley, and is filled with limestone cottages from the 17th and 18th centuries and a large village green. It’s also known for its church of St. Andrew, which has a 14th-century Gothic tower. Kingham is conveniently located next to several walking and cycling routes, making it a perfect base for visiting the surrounding area.

Population: 913
Where to stay: This thatched 16th-century cottage was built in 1544, and is just a few minutes’ walk from Kingham’s pubs and shops. $309 per night. 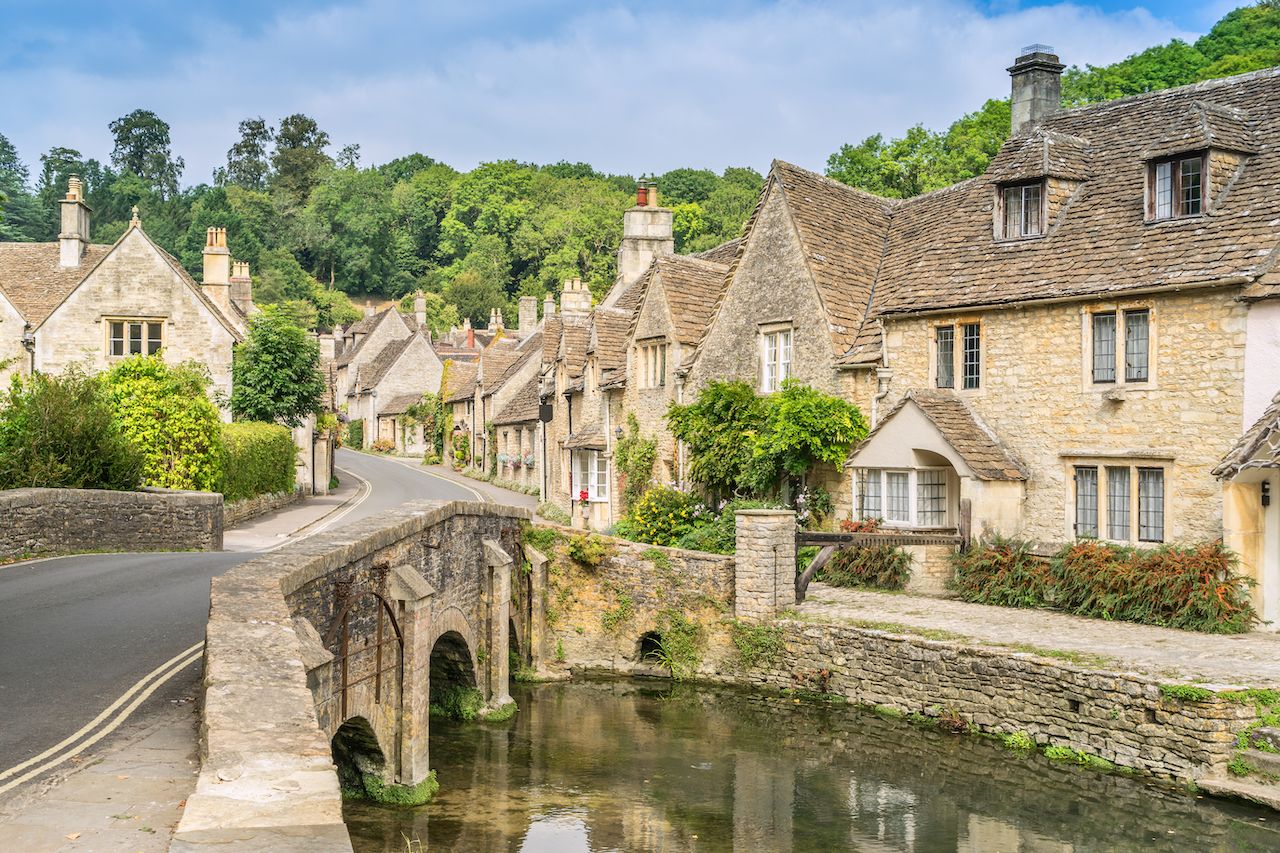 Unlike 99 percent of places in the world, no new houses have been built in Castle Combe since the 1600s. A modern home would look pretty out of place in a cute English village full of Cotswold stone cottages, wouldn’t it? The village has stunning views of the surrounding valley, and is home to St. Andrew’s Church which is fitted with what is said to be one of the oldest working clocks in England. There are also some luxury experiences like the ivy-covered Manor House, a five-star hotel with a Michelin-starred restaurant, and the Castle Combe Circuit where you can take a supercar for a ride.

Population: 344
Where to stay: This two-bedroom cottage has a garden and is surrounded by the bucolic countryside. $240 per night.