With the end of the year comes mixed feelings for different people. Some may be relieved to turn the page and start fresh, while others may see a new year as a reminder that time is always slipping through their fingers.

But whether you’re mourning or celebrating the end of 2021, there’s one thing everyone can agree on — tons of adorable baby animals entered the world in 2021, and that’s an objectively great thing.  While we’d like to spotlight every one of the cutest baby animals born this year, there are simply too many to count, so we’re narrowing it down to the ultra-huggable, ultra-heartwarming options below. But there are plenty of births from zoos, sanctuaries, reserves, and rescue centers to fill an hour or two of online browsing.

Without further ado: these are the cutest baby animals born around the world this year that will make your heart melt.

Not one but two pandas were born at Zoo de Beauval in Saint-Aignan-Sur-Cher, France, to mother Huan Huan. The birth is the result of contact between resident panda Huan Huan and male panda Yuan Zi, as well as artificial insemination by animal reproduction specialists just to make sure the mating was a success. Their naming, which took place in November, was the source of much interest, as Huan Lili was named after Paris (“lili” represents Paris), while Yuan Dudu was named after Chengdu, China. In addition to being incredibly cute, the pandas represent the joint efforts of the ZooParc de Beauval and the Chengdu Research Base of Giant Panda Breeding, indicating the potential for more border-crossing conservation and research efforts. — a symbolic nod to the collaboration between the two countries and institutions.

2. Brazos: Asian elephant calf at the Fort Worth Zoo, US

Brazos is one of the cutest baby animals The Fort Worth Zoo welcomed in 2021, though at 255 pounds, he’s a pretty big baby. But in elephant terms, that’s actually pretty small. Born Oct 21, he’s an Asian elephant, who came into the world at 37 inches tall and with a trunk length of 12 inches — apparently the perfect example of a bouncing baby boy. Since Asian elephant populations in the wild have been steeply declining, zoos and conservation parks may soon be the only place you can see them, thanks to the conservation efforts of places like the Fort Worth Zoo. It has a promising track record of elephant conservation; Brazos’ half-brother Bowie was born in 2013 and his mother (Bluebonnet) was born at the zoo in 1998.

No, “wild ass mare” isn’t a characterization of how this donkey behaves at parties. The youngest child of the Somali wild ass Mwana (also known as a wild donkey) Salia was born at Zoo Basel, and by all accounts is quite well-behaved. She enjoys spriting outside with her mother, and is described as playful. Salia is one of just 200 Somali wild asses in zoos around the world. Since these donkeys are endangered, she is an important part of a waning population and scientists help she’ll eventually have foals of her own.

This female Pygmy hippo is the first calf born at Sydney’s Taronga Zoo in over four years. Born to parents Kambiri and Fergus, the calf is still learning how to walk, and spends most of her time in an off-exhibit nursery den. She also doesn’t yet know how to swim or hold her breath underwater — those are skills she’ll have to learn from her mother. Pygmy hippos are native to the forests and swamps of West Africa, and are considered endangered with somewhere between 2,000 and 3,000 left in the wild. She’s so new to the world that she doesn’t yet have a name, but fans can vote for their favorite on the Zoo’s website until Dec. 19.

If they had just a few more siblings, these lion triplets could form the entire cast of “The Lion King.” Born at ZOOM Erlebniswelt Gelsenkirchen, Jamila (“the beautiful one”), Malaika (“angel”) and Kumani (“fate”) live with their mother, Fiona, in one of the zoo’s caves. They were born on October 8 and so far, handlers say they’re curious and playful. Visitors are welcome to pay the lion cubs a visit, though the cubs might not always choose to appear for guests.

6. Blue-crowned pigeon chick at the Santa Barbara Zoo, US 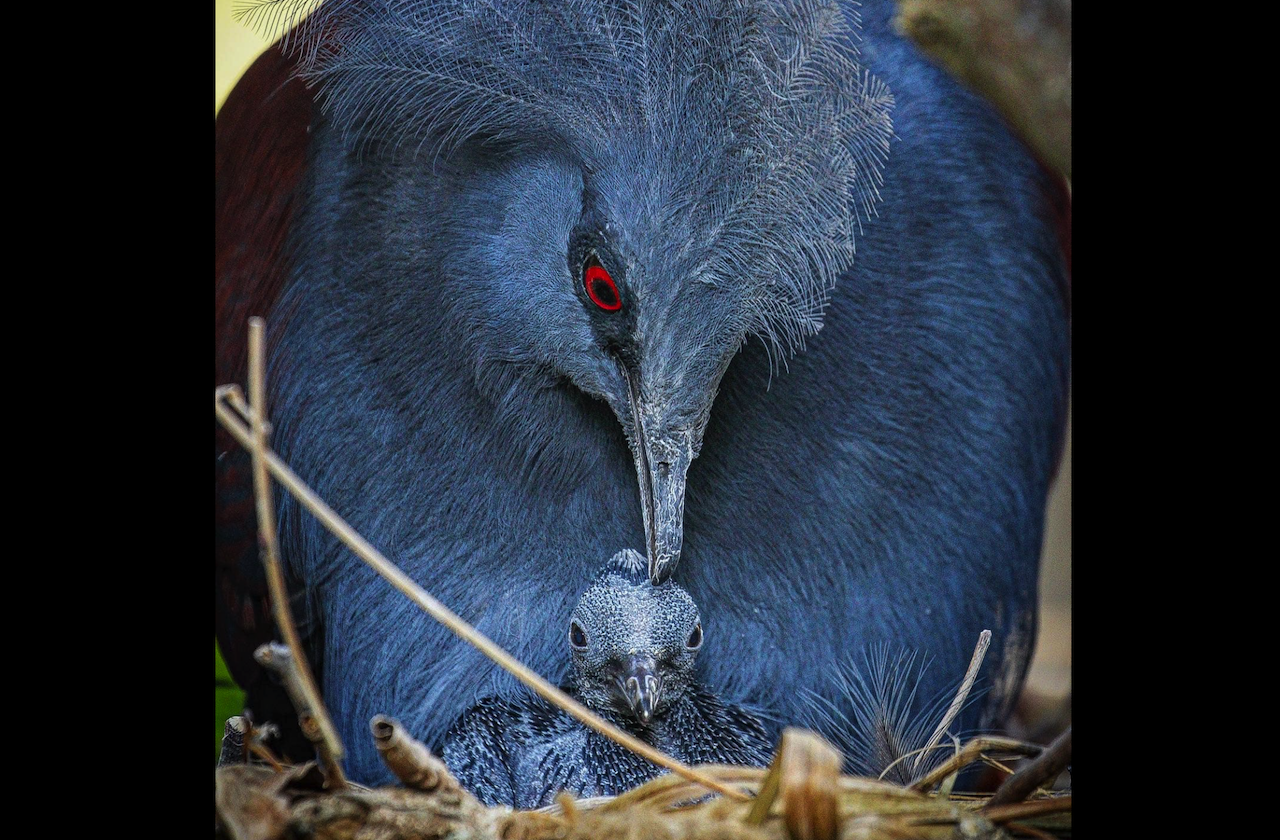 This as-yet nameless blue-crowned pigeon chick was born in the Wings of Asia aviary at the Santa Barbara Zoo. The chick was born with no feathers, but had a small, feather crest starting to appear on his head by the time he turned 15 days old. Now, he’s almost fully covered in soft blue feathers. Similar to his parents, he’ll eventually have a large crest on his head and be recognizable by his brilliant blue coloring — a hue that doesn’t often occur organically in nature. You can visit the chick as well as its parents in the aviary.

7. Baby gorilla at the Cleveland Metroparks Zoo, US

On November 4, the Cleveland Metroparks Zoo proudly announced the birth of the first gorilla in its 139-year history. He was born Oct. 26 and weighed just three pounds. Interestingly, mom Nneka didn’t seem too keen on motherhood, but one of the zoo’s other females, Fredrika, apparently took to the infant immediately. In fact, she even carries him to the zookeepers for daily feedings. The to-be-named gorilla will be in constant contact with Fredrika for the first six months, and rely on a nurse for three years after that. The newborn is currently being bottle-fed by the zoo’s animal care team, and trained using positive reinforcement techniques. Visitors can see the baby during a limited midday window, but even if you don’t see him during your visit, the cost of admission makes a difference. The zoo partners with the Karisoke Research Center, an organization founded by noted primatologist Dian Fossey, to protect wild gorillas in Rwanda and the DRC.

8. Lennie: Sea lion pup at the Columbus Zoo and Aquarium, US

One of the Columbus Zoo and Aquarium’s cutest baby animals this year was Lennie, a sea lion pup born in June. The name Lennie was picked by a zoo donor who shares Lennie’s birthday. The donor’s mother’s middle name was Lenore, and in her honor, the seal pup was bestowed with the same name — but it’s Lennie for short. Lennie is now around six months old and recently learned how to swim. Guests can visit with her and her mom on one of the zoo’s “Behind the Marina” sea lion tours.

9. Baby giraffe at the Henry Doorly Zoo and Aquarium, US 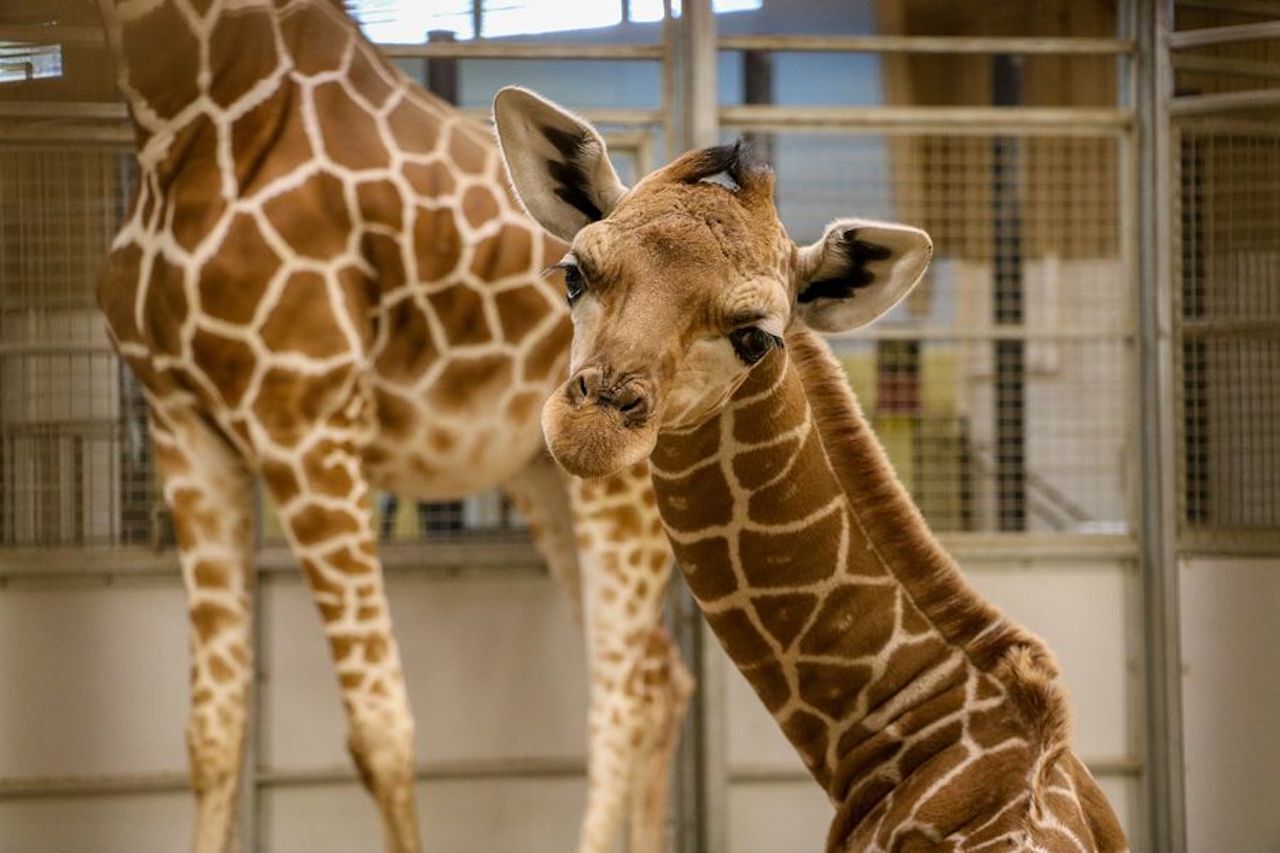 A new baby giraffe was born at the Henry Doorly Zoo and Aquarium in Omaha this past August to mother Betty Francis and father Jawara. Both parents and child are reticulated giraffes (Somali giraffes), which are endangered. Only around 16,000 are left in the wild, so any new addition to the species is welcome and encouraging news. The calf has been reported to be independent, attentive, and well-behaved. One of 10 giraffes now housed at the zoo, the calf has begun socializing with other giraffes and getting comfortable with the movements and dynamics of the herd.

Wildlife7 Adorable Animals That Are Actually Super Dangerous
Tagged
Wildlife
What did you think of this story?
Meh
Good
Awesome