Travel to the Maldives is, rather presumptuously, thought of as an activity for honeymooners or others not worried about breaking the bank — or perhaps those with an unbreakable bank to begin with. As tourism has grown to this island nation in the Indian Ocean, an increase in resorts and a diversity of options have made it more accessible even to travelers on a budget, as long as they know where to look. One such option is to stay on a local island as opposed to a luxurious, but less authentic, resort island. Dhiffushi in the Kaafu Atoll is one of the nearly 1,200 islands that make up the world’s lowest country and is the ideal place to see this transformation happening firsthand. The island remains more affordable than resort islands, without skimping on excursions. Here’s how to make the most of a trip here.

Dhiffushi is simple, and cheap, to get to from the capital. 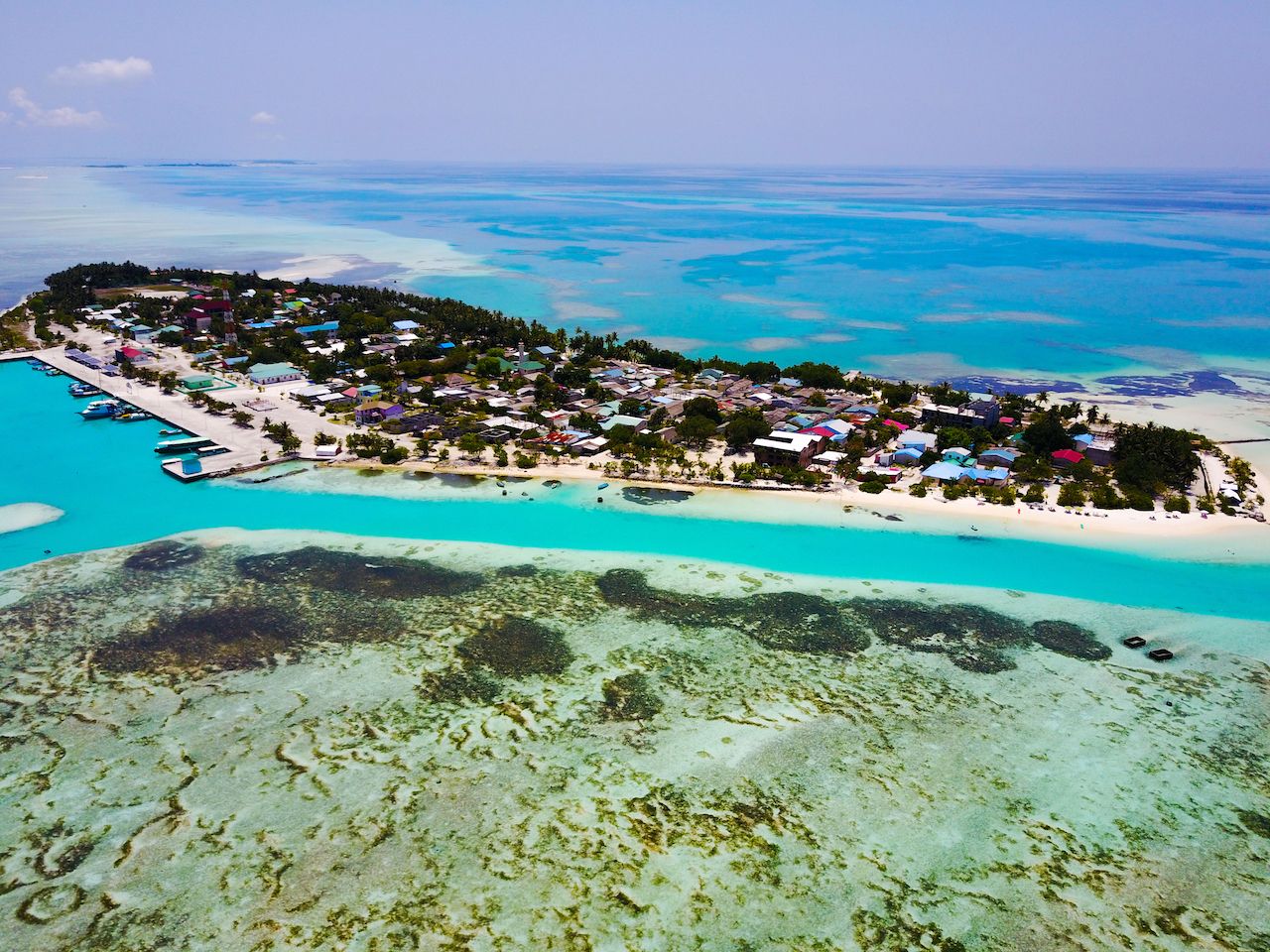 In the Maldives, distance costs both time and money — which is why Dhiffushi is a clever choice. It’s close enough to the capital city of Malé, yet further away than its bigger and more developed sister islands, including the popular tourist hub of Maafushi. Thirty-seven kilometers from the capital is less than 45 minutes by shared speedboat, which will run you between $20 and $25. It’s essential to book the transfer in advance, either through your hotel or directly with Mee Express Altec or Dhiffushi Water Sports. Boats depart from the jetty opposite Bank of Maldives, in Malé, and payment is in cash at the hotel reception or on board the boat.

If you’re traveling on a shoestring, a cheaper option is the public ferry, which costs about $1.50, but it will take you over three hours. The ferry also doesn’t run on Monday or Friday. Check Atoll Transfer for tickets and schedule. Once on Dhiffushi, you’ll be in the company of about 1,000 residents and a handful of travelers, the vast majority of which are European. Dhiffushi is a tiny island — less than one kilometer long and 200 meters wide — and it is the easternmost of all inhabited islands. 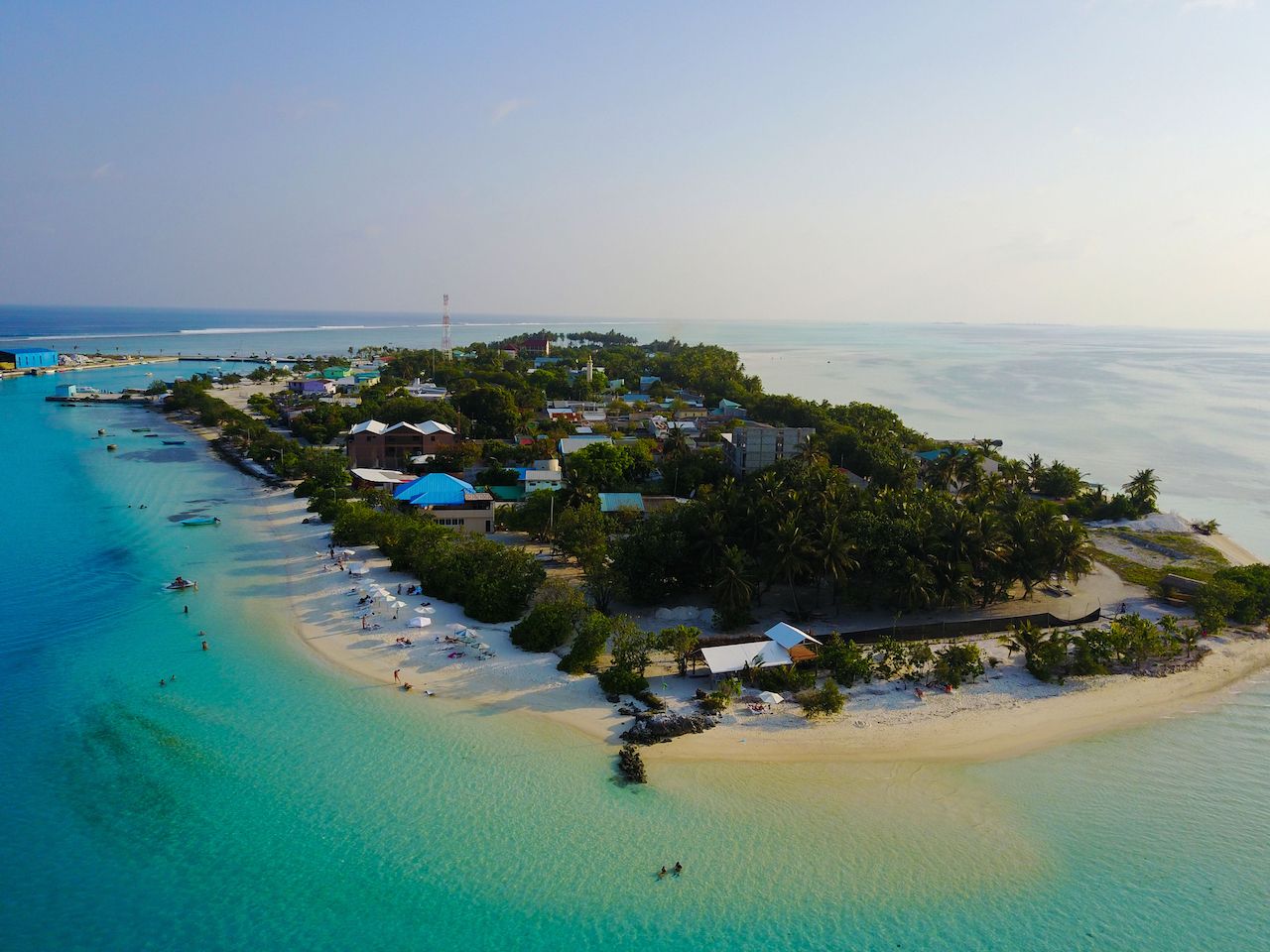 When planning your trip, keep in mind that you’re visiting a remote island atoll. Many basic conveniences that are commonplace even across country lines are all but non-existent here in the middle of the Indian Ocean. There are no ATMs, for example, and though cards are accepted in many hotels and even some shops, you’ll want to have cash on hand when you arrive. In most places you can pay in US dollars, though you’ll receive change in either dollars or Maldivian Rufiyaas and won’t always have the choice to choose between the two. Keep in mind some businesses may refuse notes older than the 2006 series. You won’t find cars, so be prepared to take mopeds around if you need motorized transport, though the island’s small size makes everything walkable.

Alcohol is also not the easiest thing to come by. As a Muslim nation, locals are forbidden from drinking alcohol though legally visitors over the age of 18 are permitted to. This doesn’t make it easy to find, but in most resorts and other areas that cater to tourism, alcohol is readily available. Just don’t count on being able to take a casual stroll up the street and find a liquor store — your quest will likely not be a successful one. 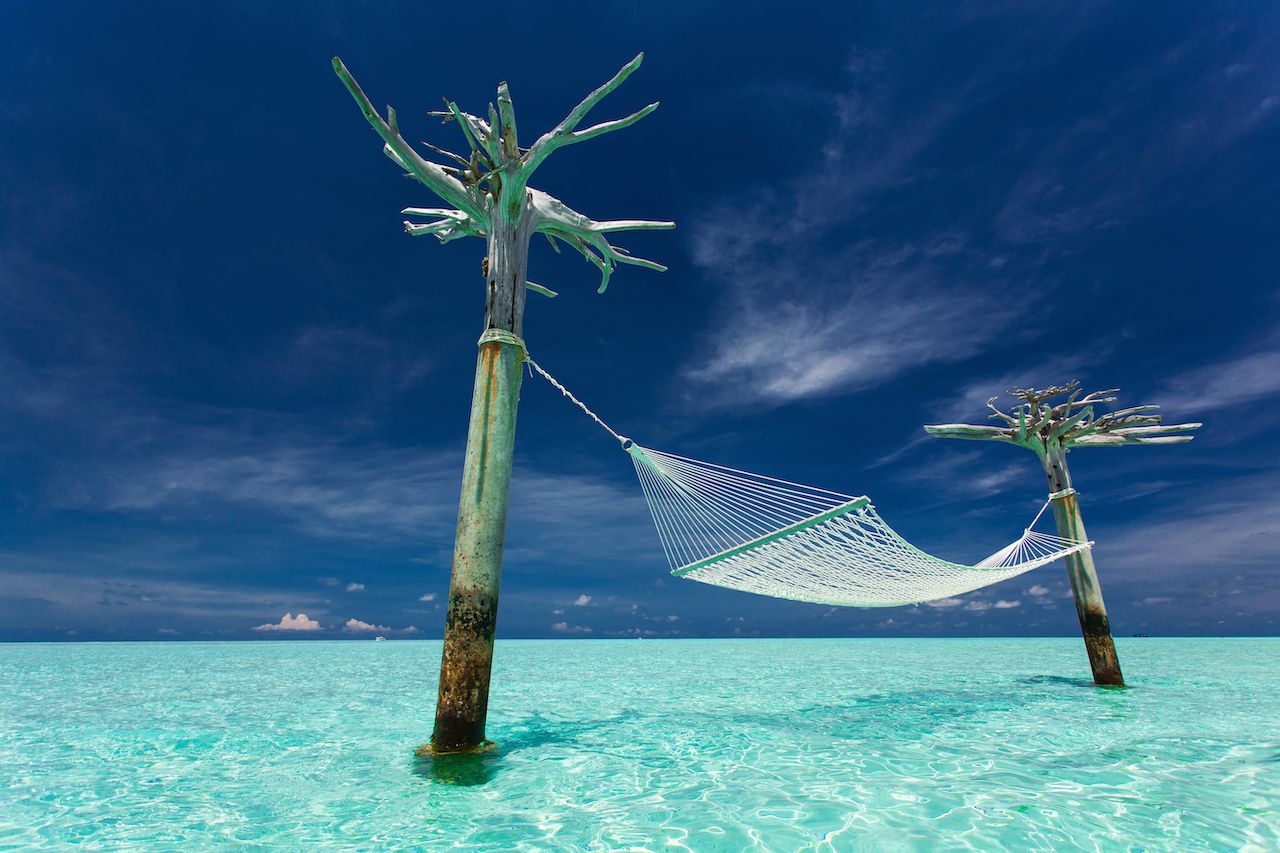 What you will find on the island is a school, a mosque, a health center, a stadium, a couple of shops and cafés, several hotels, and plenty of Maldivian hammocks (joali in the local language, Dhivehi). And what’s more, it’s crime-free, despite having no police station. The island is overall clean and tidy, but do expect to come across quite a few building sites. The west coast has the most potential for development, and many expect that part of the island to grow in the coming years.

Given the country’s Muslim population, it’s a good idea to wear conservative clothes outside of the hotel. This is true even though it often seems as though the locals are indifferent to visitors, however they’re dressed. It’s not a resentment, I learned, but more of a wariness. Most of the time, you’ll have the beaches near your hotel and the surrounding Indian Ocean all to yourself, even in high season.

The beaches — and their accoutrements — are all free. 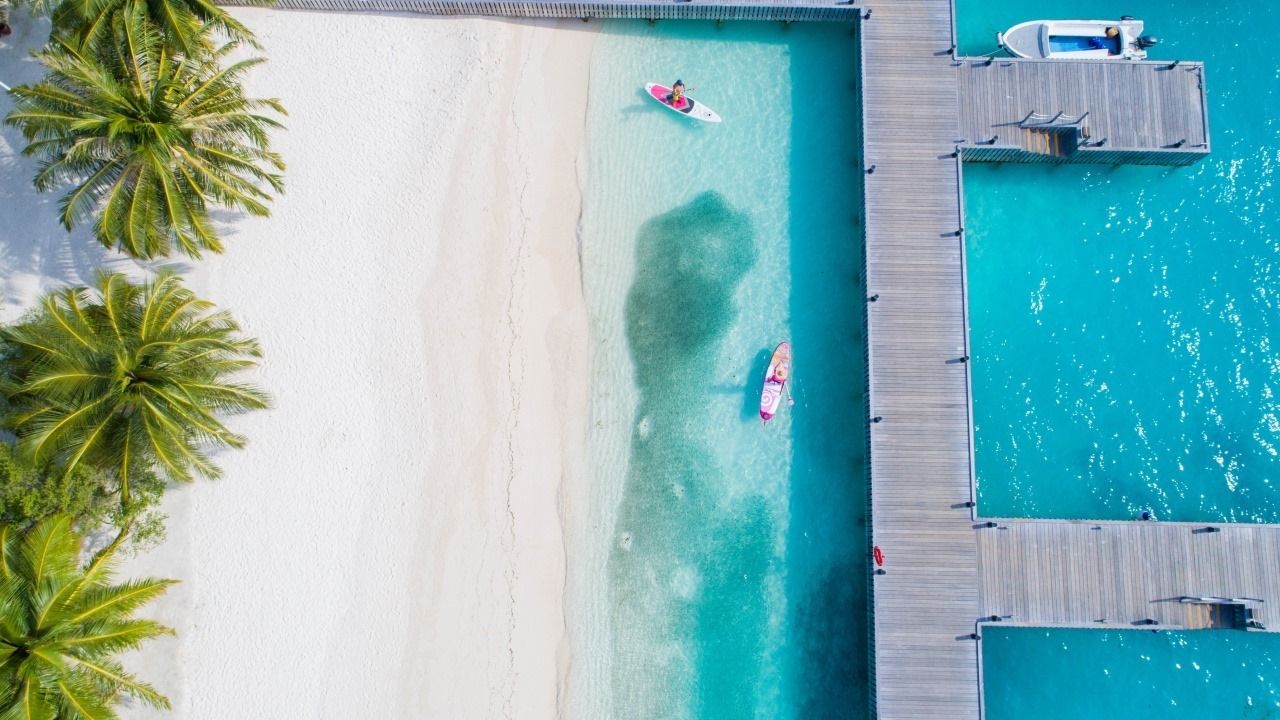 Picture a white, sandy, deserted beach framed by coconut palm trees. The whisper of a gentle breeze passes by, and warm water splashes your feet as you enter your own wide-open stretch of the deep blue Indian Ocean. This is an idyllic fantasy, but the coolest thing about Dhiffushi is that this is generally the reality here. While serious divers head to Addu Atoll and beach loungers stay on Maafushi, here you have a mix of both worlds without the tourist crowds. On Dhiffushi, the most stressful thing will be choosing between the three main “bikini” beaches, local parlance for beaches frequented by locals who tend to dress less conservatively. One, in the northeast of the island, overlooks neighboring Meeru Island Resort. Meeru charges a daily fee, the sunbeds on this beach are free to use, and you’ll be close to both a watersports shop and café.

The second bikini beach, in the southwest, has free sunbeds and shaded areas, as well. There are also hammocks, both on the beach and in the water — and they make for Instagram-perfect shots. This is a tidal beach and at sunset, it comes alive with both locals and visitors, on mopeds or on foot, taking in the view from where the latter were swimming just a few hours before.

The third beach is just to the south of the harbor. Sunbeds, parasols, and coffee tables are all to hand for free. This area has been developed for the guests of Araamu Holidays and Spa but can be accessed by anyone. There’s even an adjacent rustic outdoor gym, in case you’re inclined to workout in a tropical setting.

Getting on the water is cheaper than on the resort islands. 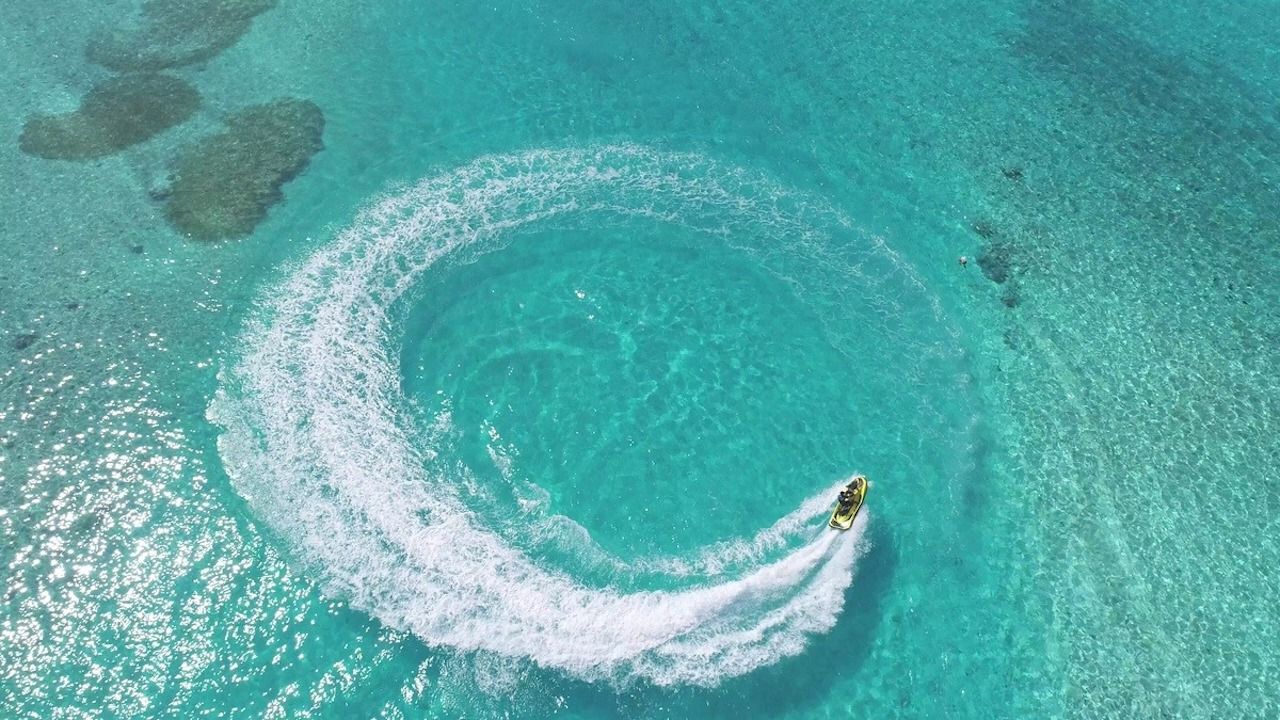 The free beaches are a primary attraction and a good way to settle into the laid-back vibe of Dhiffushi, but there’s more to do besides lounging on the beach. Snorkeling, scuba diving, stand-up paddling, kitesurfing, wakeboarding… all are readily available. A full kayaking tour around Dhiffushi lasts about an hour and is both good exercise and, at $15 per hour for a double kayak, super cheap. The northeastern coast is the most challenging stretch of an otherwise relaxing journey.

Morning fishing trips and excursions to the sand banks are also popular, with tours provided by Top Cruiser Maldives running $700. But a more inexpensive and adventurous combination is to reach the sandbank via jet ski, which will run you $70 for a three-seat jet ski that comes with a guide. To save some money, it’s always better to book directly at a watersports shop like Dhiffushi Water Sports, at the northern tip of the island, rather than through hotels. You’re essentially cutting out the middleman by going to the shop yourself. Here you can rent watersports gear by the hour and ask for advice based on the day’s conditions. 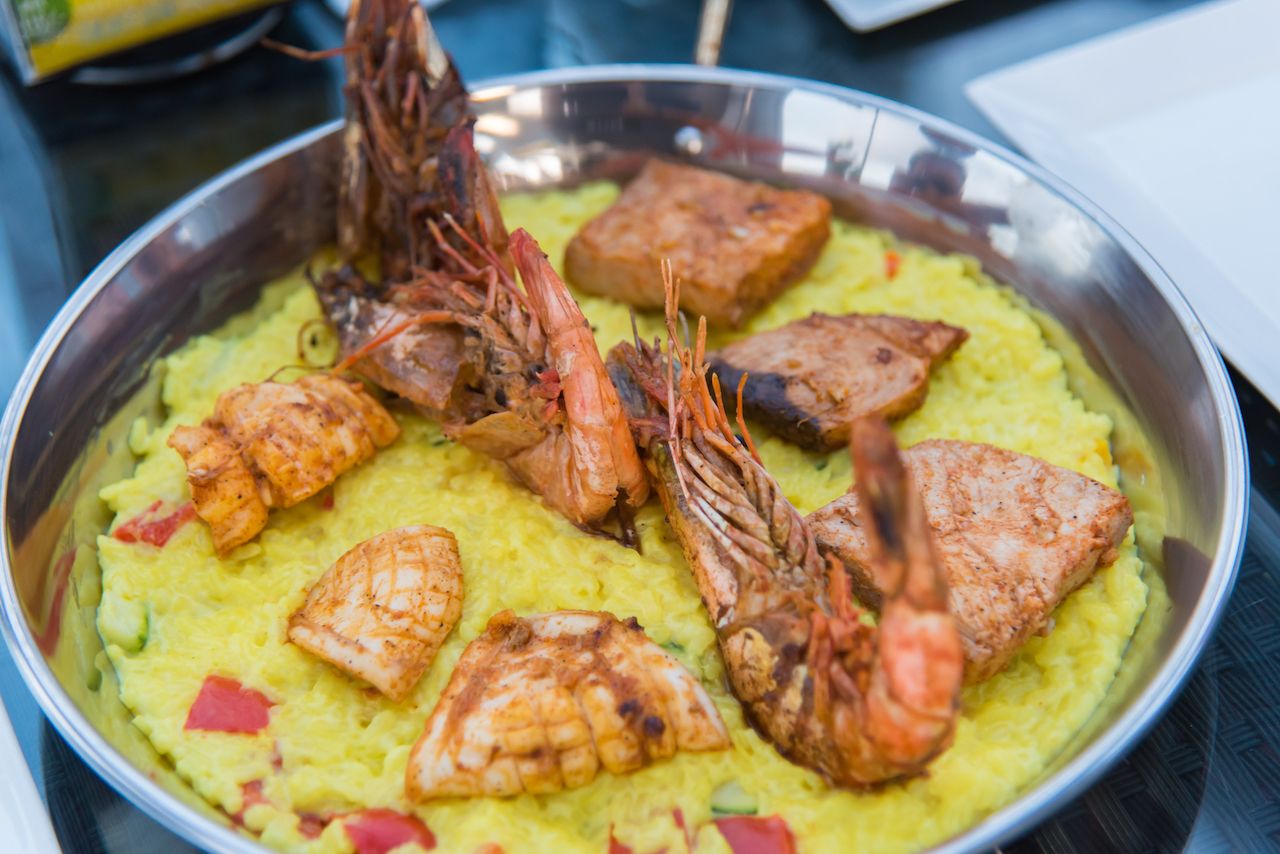 If you want to avoid spending $15 to $20 on buffet lunches and dinners in hotels, head outside. Curries are very common here, with influences from India and Sri Lanka, and tuna is the preferred seafood. Other seafood is common, as well, including shrimp and rice dishes. You’ll see it served in nearly every recipe on the island. M Cozy Café is an unpretentious eatery serving noodles, fried rice, or kottu, a sort of Malidivian stir fry often made with tuna. That’s it. For being an island, the service is actually quite fast, and your bill will come to about $5 per person for a main and a drink, plus complimentary papadum, a local bread.

A trendier and slightly more expensive option is Café 420. Here you’ll likely be greeted by a little black cat and a colorful parrot at the entrance, and you’ll immediately find yourself surrounded by quirky furniture. You’ll dine island style with feet in the sand. The menu is more varied than at M Cozy Cafe, with a selection of fish cooked on the BB, along with western dishes like pasta, pizza, burgers and chips, and fresh fruit juices. On that note — be ready for a lot of fruit juice. As on all inhabited islands in the Maldivian archipelago, alcohol and pork are prohibited. When the urge for something stronger hits, the Dhiffushi White Sand Beach hotel organizes sunset trips to a floating bar in the Dhiffushi lagoon.

You can stay in semi-luxury without paying for an overwater bungalow. 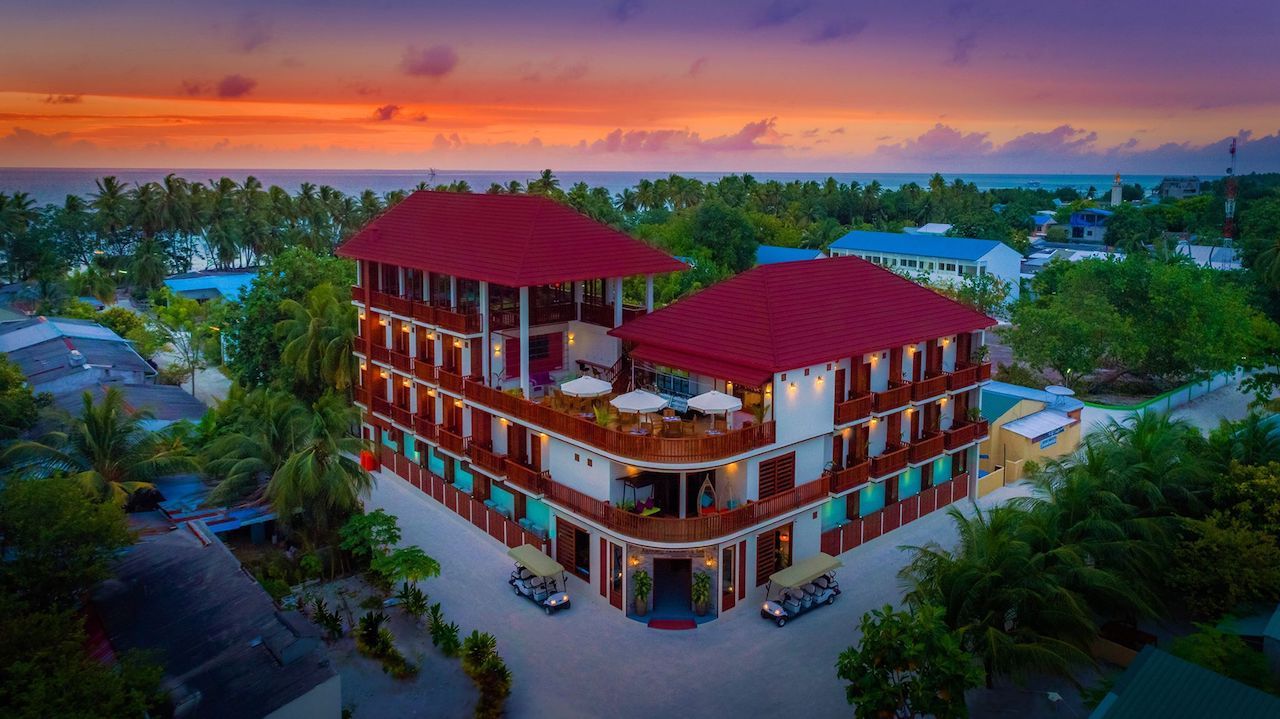 In 2011, Happy Life became the first and only guesthouse in Dhiffushi. Today, this small island is booming and boasts 12 guesthouses and hotels — with more and more accommodations currently under construction. Yet even the most modern of lodging here is very small-scale and low-rise, so it never feels crowded. You’ll find everything from basic guesthouses to four-star hotels, but you won’t be able to book a deluxe water villa with a personal butler. For that, you’ll have to head to Meeru.

Bibee Maldives is a budget option running about $50 per night, but it still offers the convenience of a heavenly beach on your doorstep. Rooms at the Araamu Holidays & Spa hotel run from $65 to $200, stepping up the comfort level a bit, with a touch of luxury by general atoll standards. It’s also worth mentioning its game room to have some indoor fun. Local bed and breakfast lodges are available, as well, with prices ranging falling in the $50-100 level.

Epic StaysThis Underwater Villa in the Maldives Lets You Sleep With Sharks
Tagged
Beaches and Islands Budget Travel Insider Guides Maldives
What did you think of this story?
Meh
Good
Awesome

This Underwater Villa in the Maldives Lets You Sleep With Sharks

This Is Not a Test: Stay at the Luxe Mercure Maldives Resort for Half Off With This Deal