As I sat in a gondola making its way from Breckenridge Station to Peak 8, my two dogs, an English Bulldog named Daisy and a Pomeranian-Chihuahua named Scout, stood staring out at Cucumber Gulch Wildlife Preserve from the side window. They wobbled a bit as the gondola moved before they looked at me with what most resembled confusion. After all, many dogs get to go on car rides and some even get to fly, but few get to ride a gondola to the peak of one of the most famous ski regions in the United States.

I found these types of unexpected dog-friendly experiences just about everywhere in Breckenridge, Colorado, when I visited in August. In warmer months, the mass of people with skis and snowboards are replaced with mountain bikers, runners, and travelers hitting the town and the trails with their dogs. In Breckenridge, it’s possible to plan an entire weekend trip without ever leaving your pup. 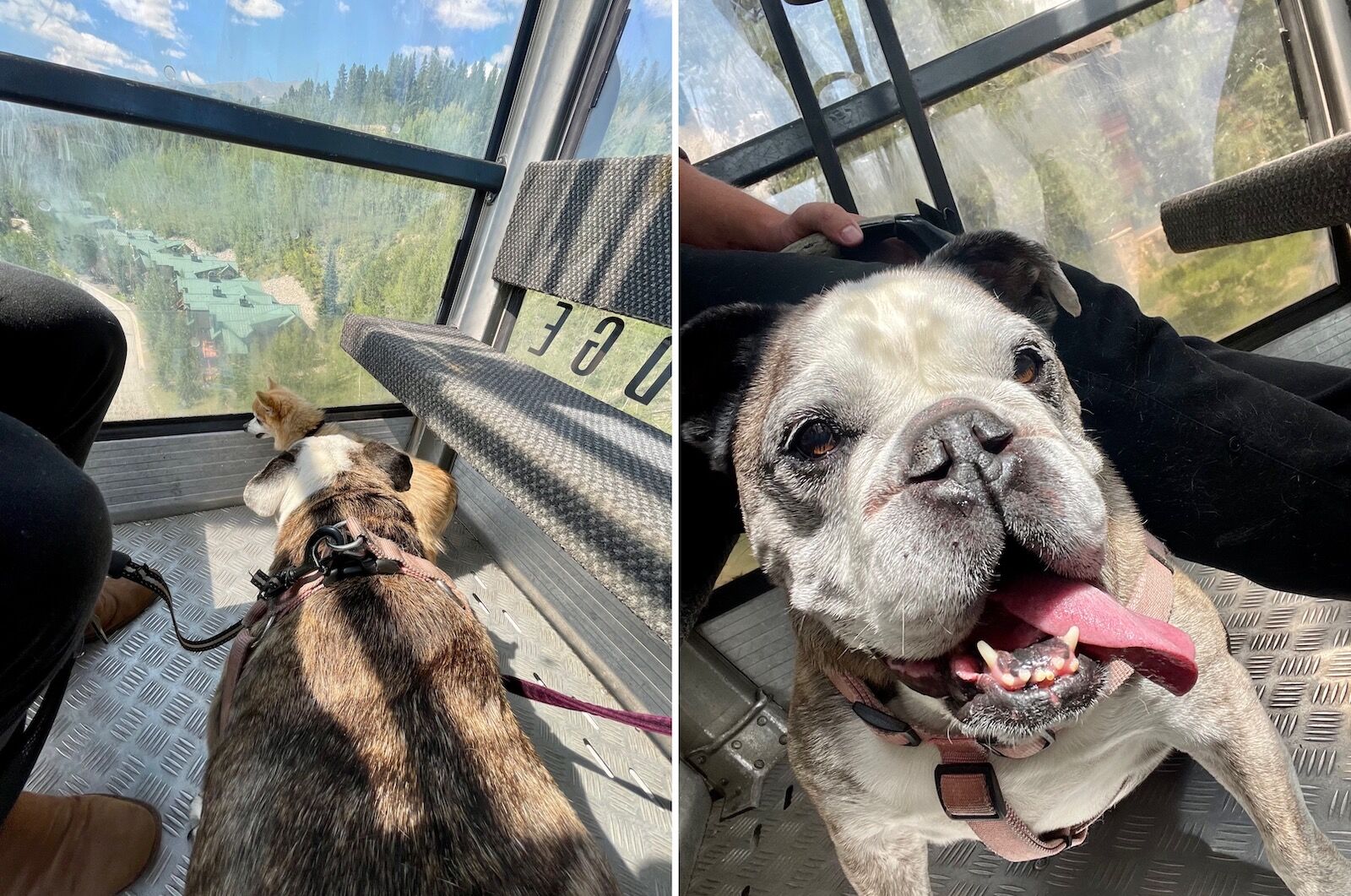 For one, pretty much all of the outdoor recreation space is dog friendly (things are slightly harder in the colder months, but summer happens to be one of the best times to visit Breckenridge). The Cucumber Gulch, as a wildlife preserve, is one area that is not to keep pets away from the frogs, beavers, and moose. Other than that, dogs are invited in most of the places that people are. Many restaurants have large outdoor patio space, and some even have dog menus. A good chunk of the breweries and bars have dog-friendly patios, too, and some allow four legged friends indoors.

Sure, anyone who has visited their share of mountain towns knows that they’re generally pretty dog-friendly places. But Breckenridge takes it a step further: Not only are pets allowed on the gondolas, but well-behaved dogs are allowed on all town and county buses, too.

Over the course of a weekend, Daisy, Scout, and my fianceé Heather joined me on a romp around Breckenridge to explore the best dog-friendly things to do in town (well, at least the things to do that a 12-year-old English bulldog could keep up with). And as for that look of confusion Daisy and Scout had on the gondola? On the trip back down after lunch, both hopped in and settled on the seats without hesitation for the 10-minute ride like any well-seasoned mountain dog would.

Dog-friendly things to do in Breckenridge 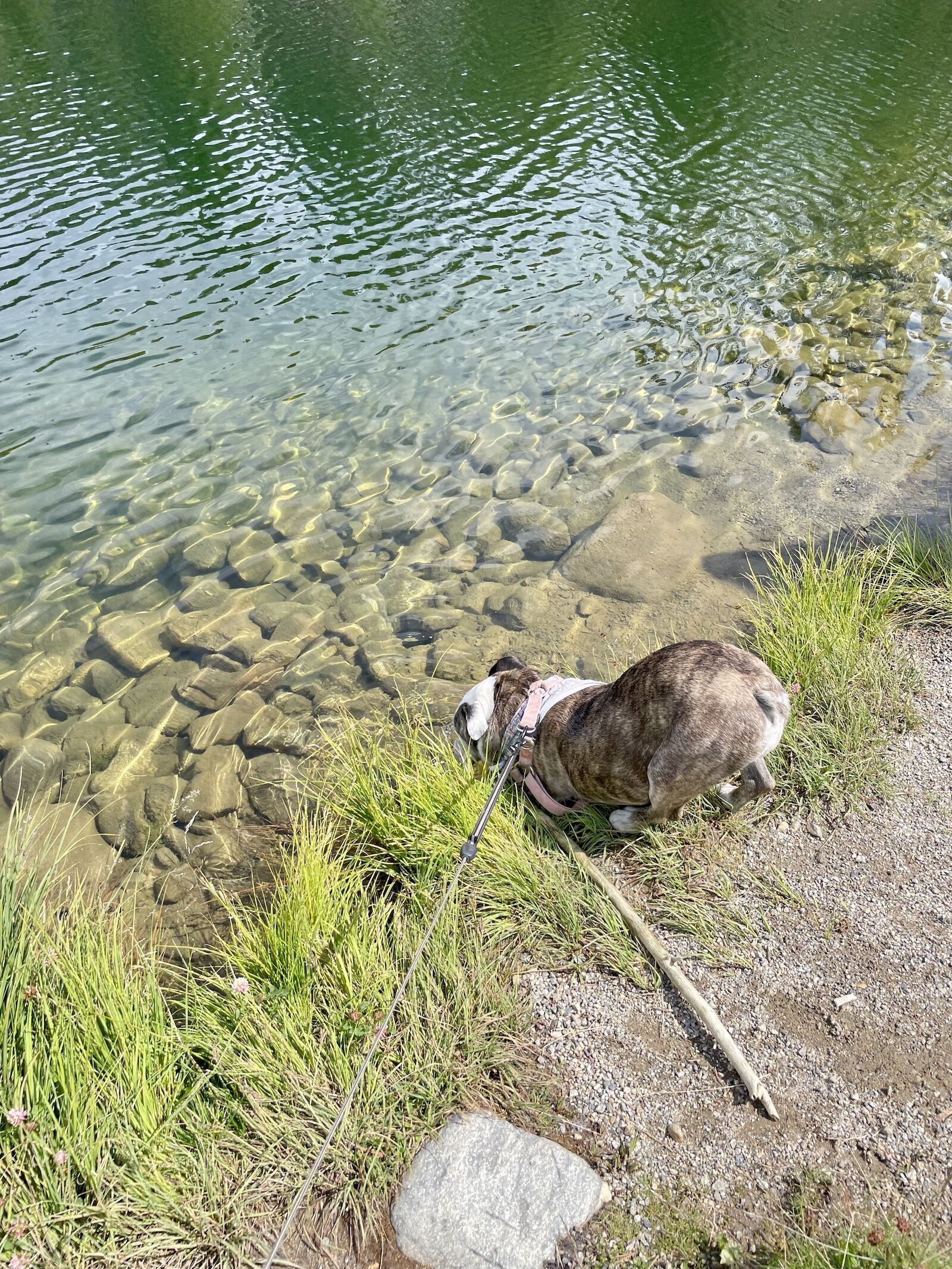 Tiger Dredge Pond: As a former mining town, Breckenridge is full of spots that were historically mined by dredge boats. Dredging was an incredibly effective way to get gold out of the ground, but also an incredibly environmentally destructive way that tore the bottom off the floor of a body of water, extracted the gold, and then spit out the remaining dirt into a piling heap. What was left behind was certainly not a pretty sight during the Breckenridge gold rush in the mid 1800s. But today, many sites have been repurposed, beautified, and, in many ways, restored. Tiger Dredge Pond is one of those, and it only takes a short and easy hike to get to. Wildflowers line the pathway up as well as the river, and people fish for trout that can be seen from the shore. The water is cold — perfect for a hot dog looking to cool their paws off.

Carter Park Dog Park: Sometimes the day calls for sitting back while your dog gets their energy out with with own species. Let your dog run free with other pups at Carter Park Dog Park, which has nearly an acre of enclosed park space — plenty of room if you have a semi-social dog like Scout that likes to wander alone for a bit in between short bouts of play time.

Sawmill Reservoir: Let the dogs splash around in Sawmill Reservoir, a popular spot for swimming, fishing, and hiking that’s just minutes from downtown. A mile-and-a-half hike (minimal elevation gain, plenty of shade) along a stream from Snowflake Lift ends with the reward of the reservoir. Its accessibility makes it popular among families and people looking to take it a little easier than the many other more involved trails that you can get to from downtown.

Gondola ride: The BreckConnect Gondola is a free, 10-minute ride that takes you from Breckenridge Station in town to Breckenridge Ski Resort’s Peak 8. Along the way, you and your dog can look over the Cucumber Gulch Wildlife Preserve and see the Ten Mile Range (plus get plenty of pets from the gondola workers on either end). At the top, there are dog-friendly restaurants like Robbie’s Tavern, outdoor family-friendly activities, and plenty of views. The gondola runs from 9:30 AM to 6 PM, but note that weather — especially from the afternoon thunderstorms common in the summer — could cause delays or service cancellations. If that happens, you can always take the black route on the Breck Free Ride to get back.

Breckenridge Arts District: Walk around the Arts District to see the thriving artist community working with a wide variety of mediums in Breckenridge. Note that not all venues, exhibits, and areas are dog-friendly, but there’s still plenty to see that is.

Take a hike: If you have a more active dog, check out the many trails that are either walking distance or a short drive from Breckenridge on AllTrails. Just remember to clean up after your pet, leave no trace, and keep your dog leashed where it’s required. 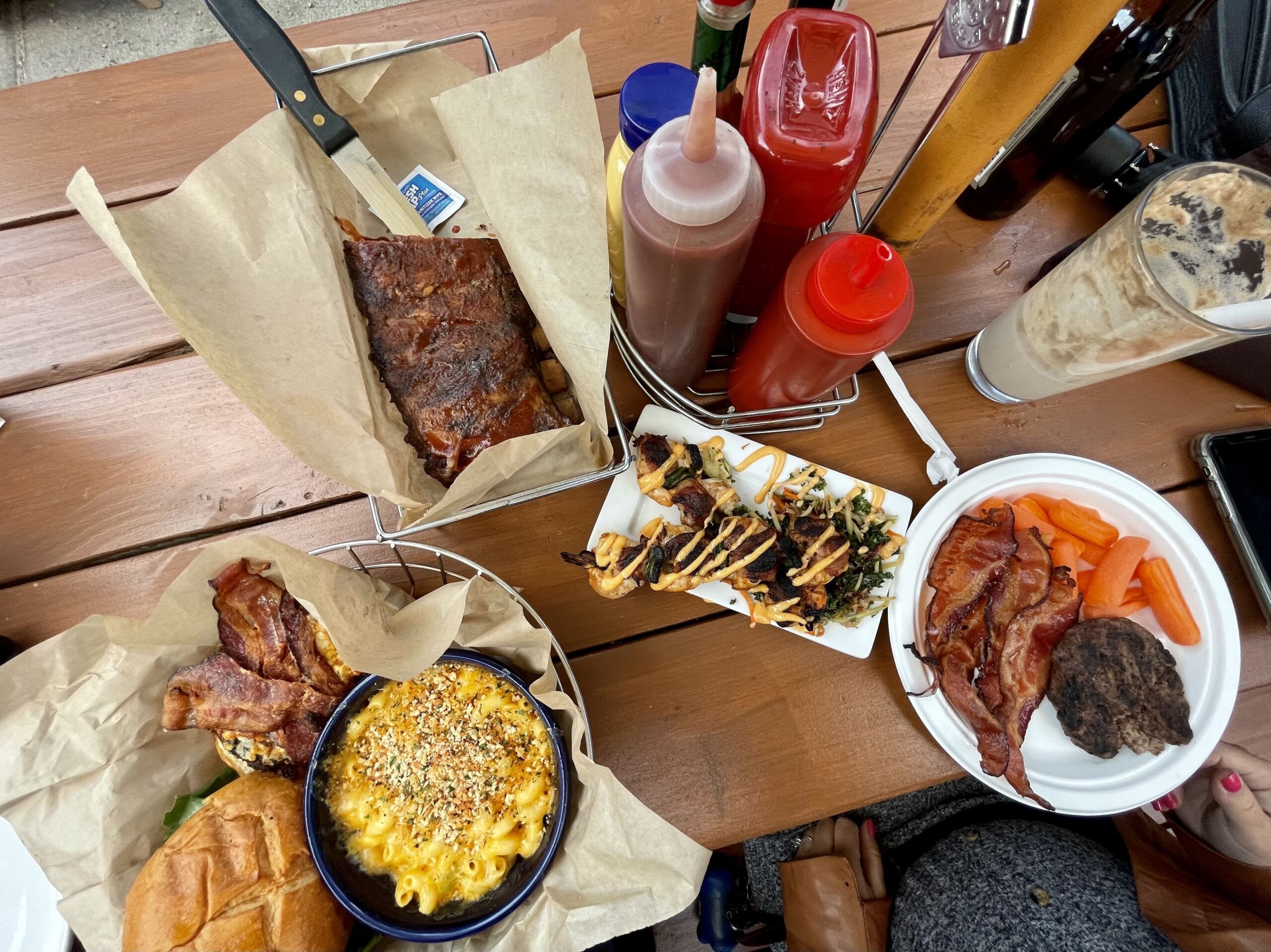 In many cases, outdoor areas are dog friendly. While there’s a good chance that your pup will be allowed to sit alongside you, call ahead to double check before going or head to one of these tried-and-tested spots. 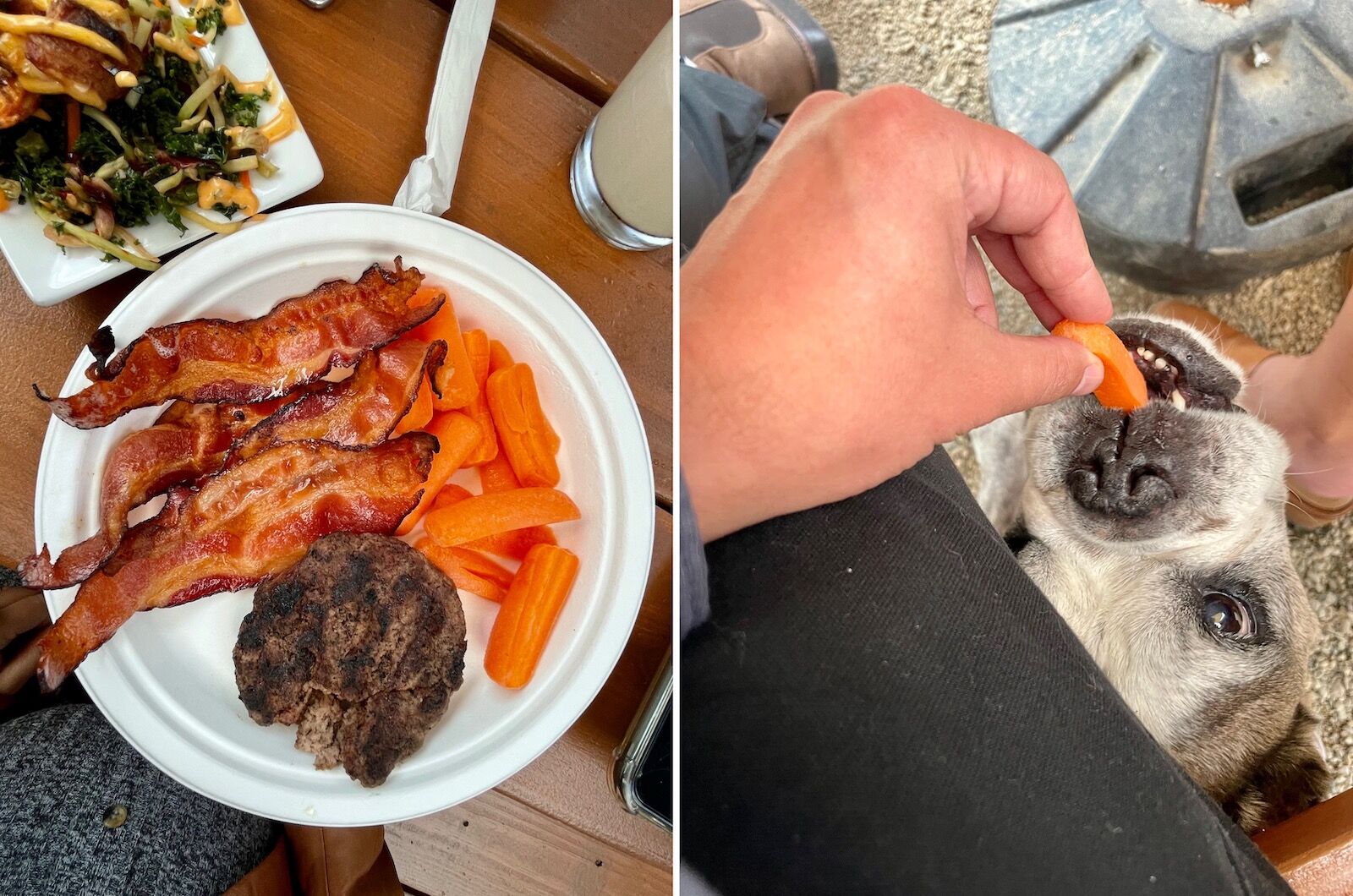 Kenosha: Nothing says “dog-friendly restaurant” like a dogs-only pawtio menu. Take a seat in the back with the dogs and you’ll quickly find that the staff are the only people who like your pet as much as you think everyone likes your pet. For people, there’s a solid selection of craft beer (including occasional picks that are rare on this side of the country, like Heady Topper) and other drinks, as well as a food menu with hearty burgers with heavy toppings, steaks, fish, and classic barbecue joint sides. The dogs get extra special treatment, too, with a menu that includes a full plate option filled with bacon, a hamburger patty, carrots, and fresh pupsicles.

Cool River Coffee House: This well-shaded corner cafe with an outdoor wraparound patio is the perfect spot to fuel up in the morning before heading out. The house-made cinnamon rolls are the type of sweet that even someone who doesn’t like sweets will appreciate, while the breakfast tacos are more than satisfying. 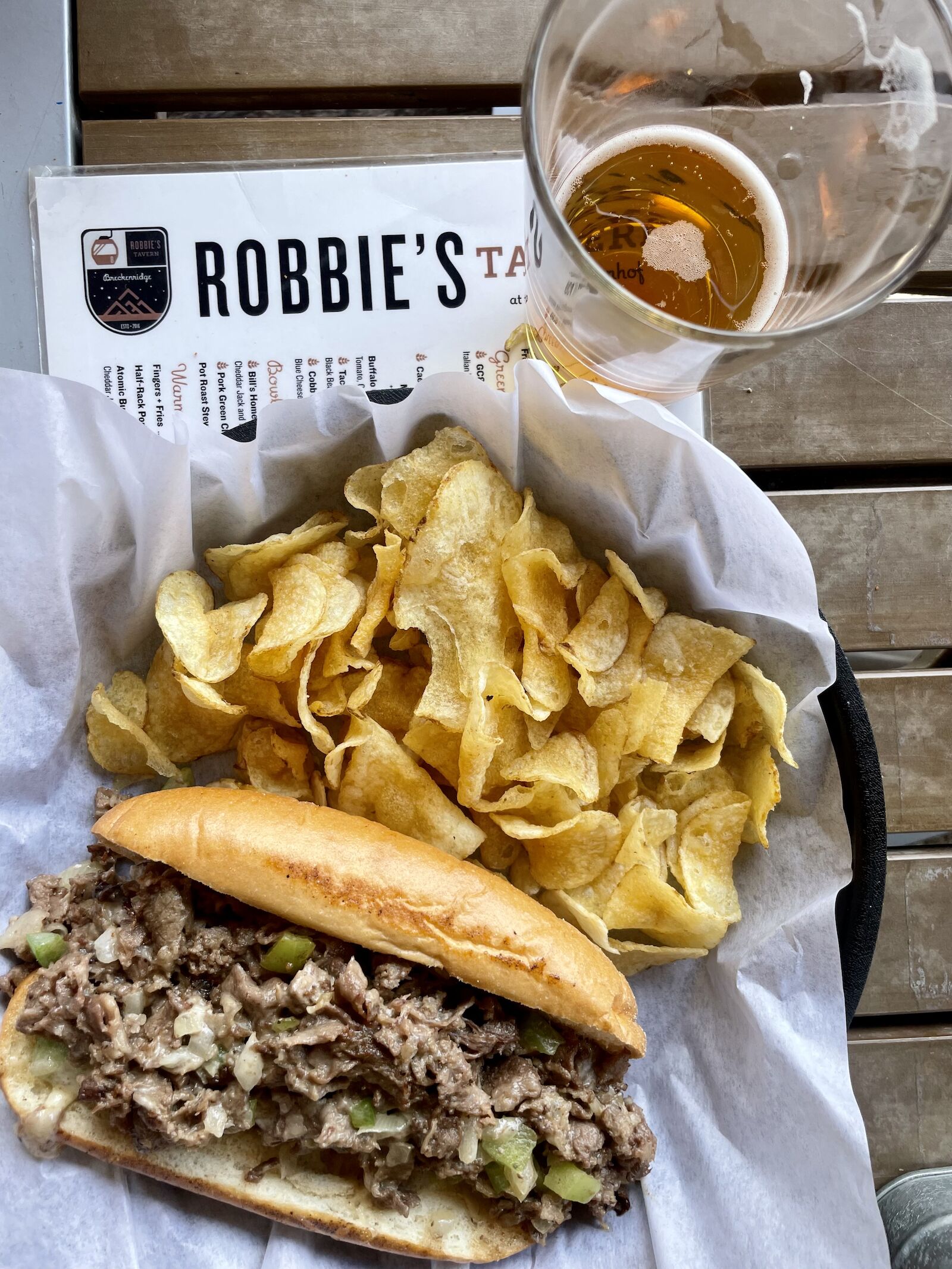 Robbie’s Tavern: After your trip on the gondola, head over to Robbie’s Tavern for a meal and a drink with your dog by your side. Start with the wings and go straight to the Philly cheesesteak as you watch the bikers head down the mountain.

BreckFast: While the name might sound like it emphasizes only one particular meal of the day, BreckFast is also a lunch spot. Bonus: The restaurant and patio sit under Broken Compass Brewery, so you can take your dogs from early beer time to lunchtime with ease. Order the Breck Bahn Mi, which is made with a French baguette from La Française, a bakery across the street started by a France native Margot Heraud that makes its bread daily.

Dog-friendly bars and breweries in Breckenridge

Broken Compass Brewery: The vibe of this Main Street taproom is clear from the slogan: “Drink beer, pet dogs.” All friendly dogs are welcome indoor and out, so you can hideaway inside during any afternoon showers or late night chills while sipping award-winning beer. The original location, which is also where the beer is made, is just north of town, and is also dog friendly. 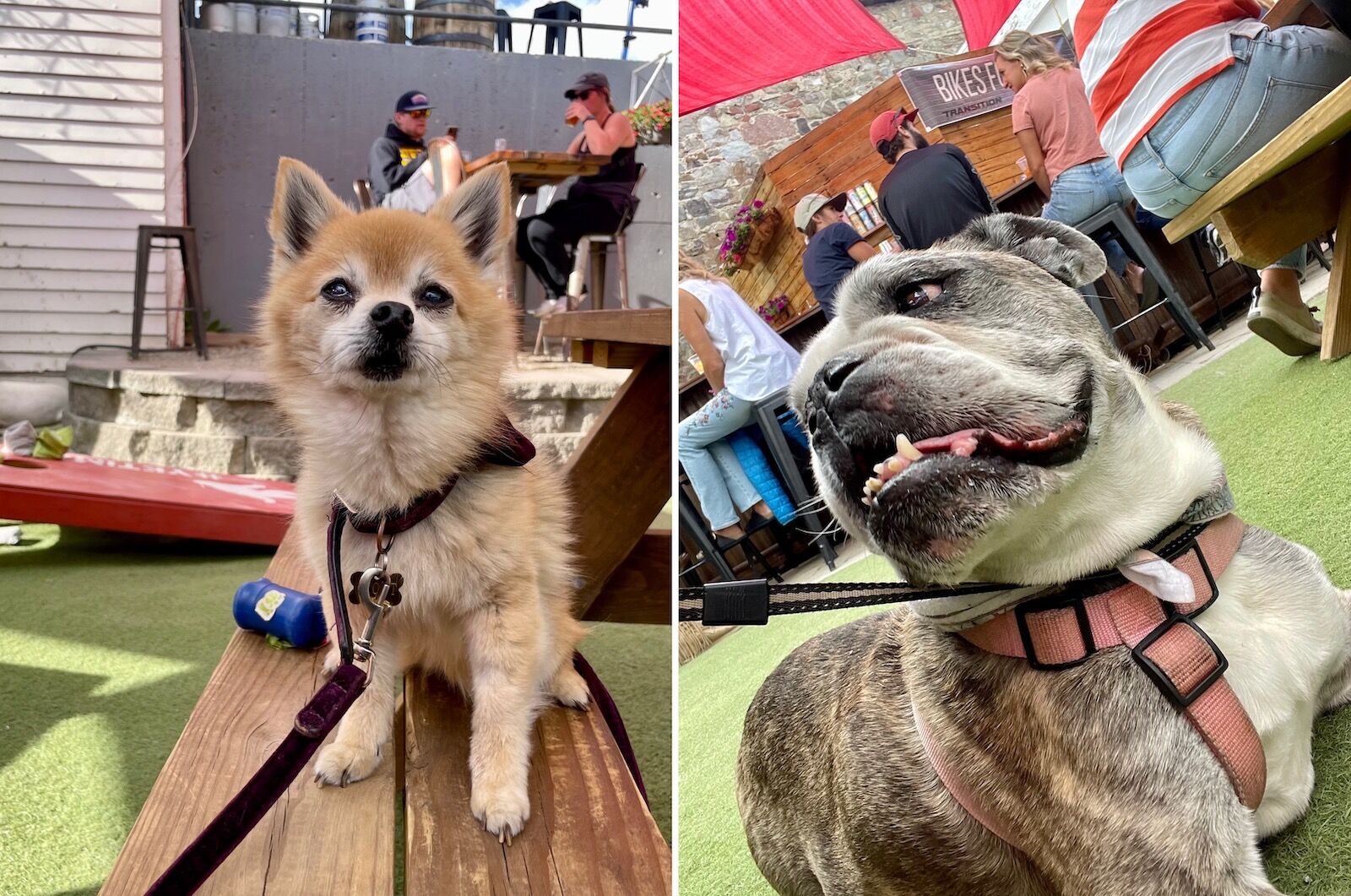 RMU: Go all-in on the outdoor mountain life at RMU. Inside, you’ll find skis, bikes, and all the gear you could hope for. Outside, a lively patio bar serves as a respite from activities (plus a bike wash center on the side, if you rode up dirty). The bar serves up beer and cocktails, while a grilled cheeserie provides the food. There’s also a stage for live music.

Breckenridge Distillery: The world’s highest distillery is, of course, also the world’s highest dog-friendly distillery. Sip on the many award-winning whiskeys neat or in cocktails and indulge in some lawn games on the patio. Don’t leave without spoiling your pup with locally made dog treats and a branded bandana. 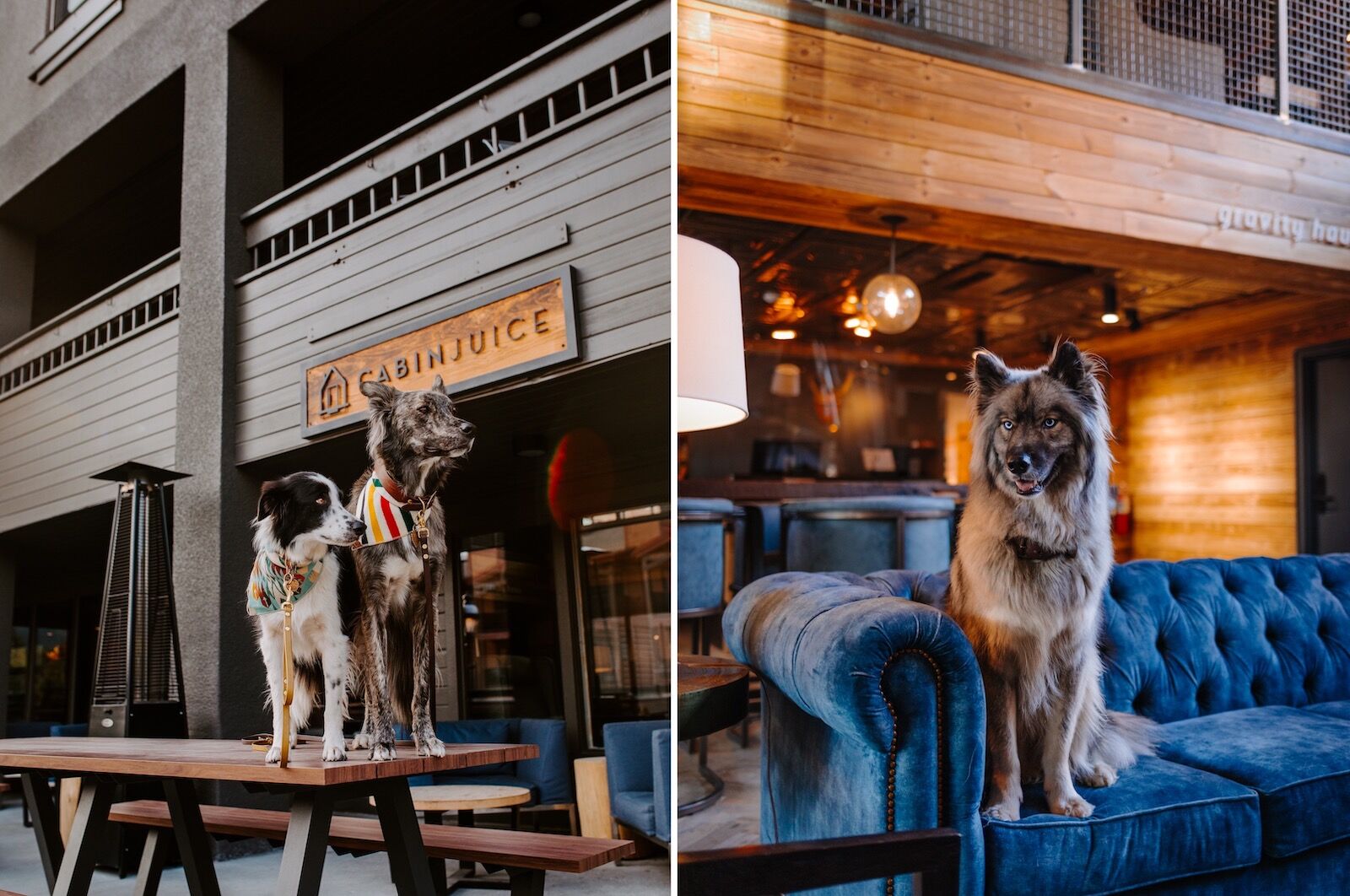 Gravity Haus Breckenridge has a prime location near Main Street and the base of Peak 9, and you’ll find one of the 60 rooms perfectly suited for you and your pet thanks to the amenities (doggie bed, bowl, and treats included), coffee shop, and restaurant and bar. Dogs get their photo taken and get to sign their name in the guestbook upon check-in. There are a number of other dog-friendly accommodations in Breckenridge as well that can be found on the Breckenridge tourism site.

Epic StaysThese Gorgeous Summit County Airbnbs Are the Perfect Home for Your Group Ski Trip
Tagged
Travel
What did you think of this story?
Meh
Good
Awesome