It’s hard not to love Breckenridge. Ask anyone who’s been, and they’ll probably rattle off a list of reasons they seriously considered staying after their last visit.

An old mining town, Breckenridge never quite lost its frontier spirit. It’s not splashy like Aspen or Vail, but it has 187 enviable ski trails to keep devotees entertained and a Victorian-studded downtown to keep them every bit as charmed. It even hosts the tallest chairlift in North America, the Imperial Express Superchair, which climbs 12,840 feet up the resort’s Peak 8.

Most fall for this Breckenridge, the one buried beneath powder six months out of the year, but it only tells half the story. And in many ways, it skips over the best parts.

“In winter, there’s really only two things to do a lot of here: ski and drink,” explains Jimmy Walker, the brewmaster at the Breckenridge Brewery and a Breck resident for 22 years. “So unless you’re proficient at both, it can be tough. In summer, there’s just so much more to do.”

Around here, recreation almost always involves good beer or the great outdoors, but the warmer months enable a wider variety of activities, from mountain biking to river rafting to summer concerts. Meanwhile, downtown businesses break out the patio furniture, and après-ski huddles melt into sunbathing sessions that make the historic center even more inviting.

Summer may not be the season most people associate with Breckenridge, but according to Walker, a July visit might actually convince you to relocate.

“I can’t tell you how many people have moved out here after visiting in the summer,” he says. “Anyone that falls in love with Breckenridge in the winter, I tell them, ‘Pack a big bag if you ever come out in July or August — because you won’t go back.’”

Everyone swaps their snowshoes for hiking boots. 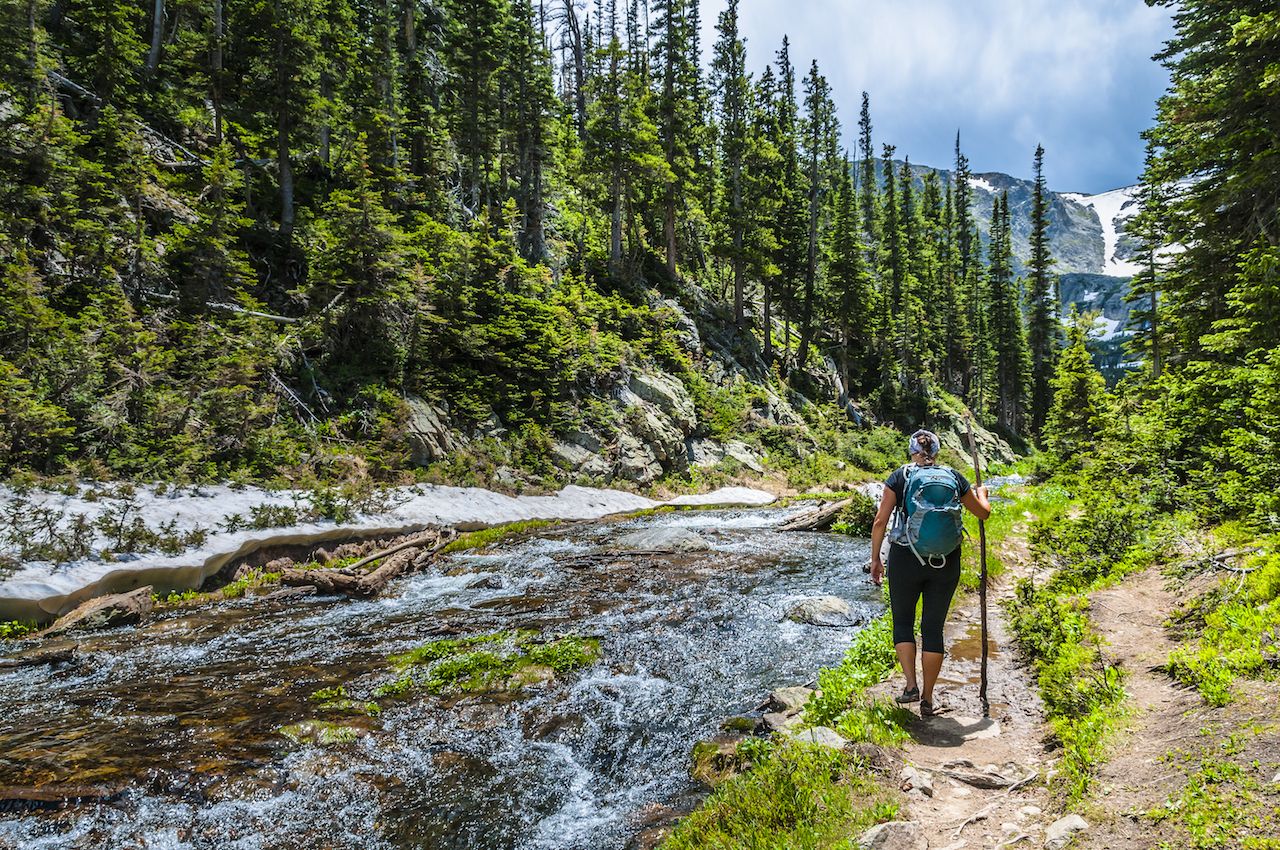 There’s no such thing as inside weather in Breckenridge. Snowing? Time to hit the slopes. Almost blizzarding? All the better if it means shorter chairlift lines.

As the temperature rises, that outdoor enthusiasm shifts from pistes to trails, which is hardly a surprise given the hundreds in the area. National forest stretches in every direction from Breckenridge. From the town center, hikers can access beloved trails like the Carter Park Trail and the Burro Trail at the base of Peak 9 without ever setting foot in a vehicle. Both splinter off into numerous backcountry roads, so there’s no risk of wearing them out.

For more elevation gain, plus the accompanying views, scamper up Bald Mountain, affectionately referred to as Baldy. Hike to the ridge for panoramas of the Blue River Valley and Tenmile Range, then carry on to the summit and complete the eight-mile out and back. Be sure to look out for the historic Iowa Mining Mill on your way.

You’ll pass mining ruins and what remains of an old lift on the Mohawk Lakes Trail, as well, but it’s the alpine trees, lakes, and waterfalls that make this hike an all-time favorite. Follow the six-mile loop from the Spruce Lakes Trail to Mohawk Lake and the Continental Divide, the biggest waterfall around. Prepare for switchbacks or opt for the easier McCullough Gulch falls hike instead.

Mountain biking is just as spectacular. 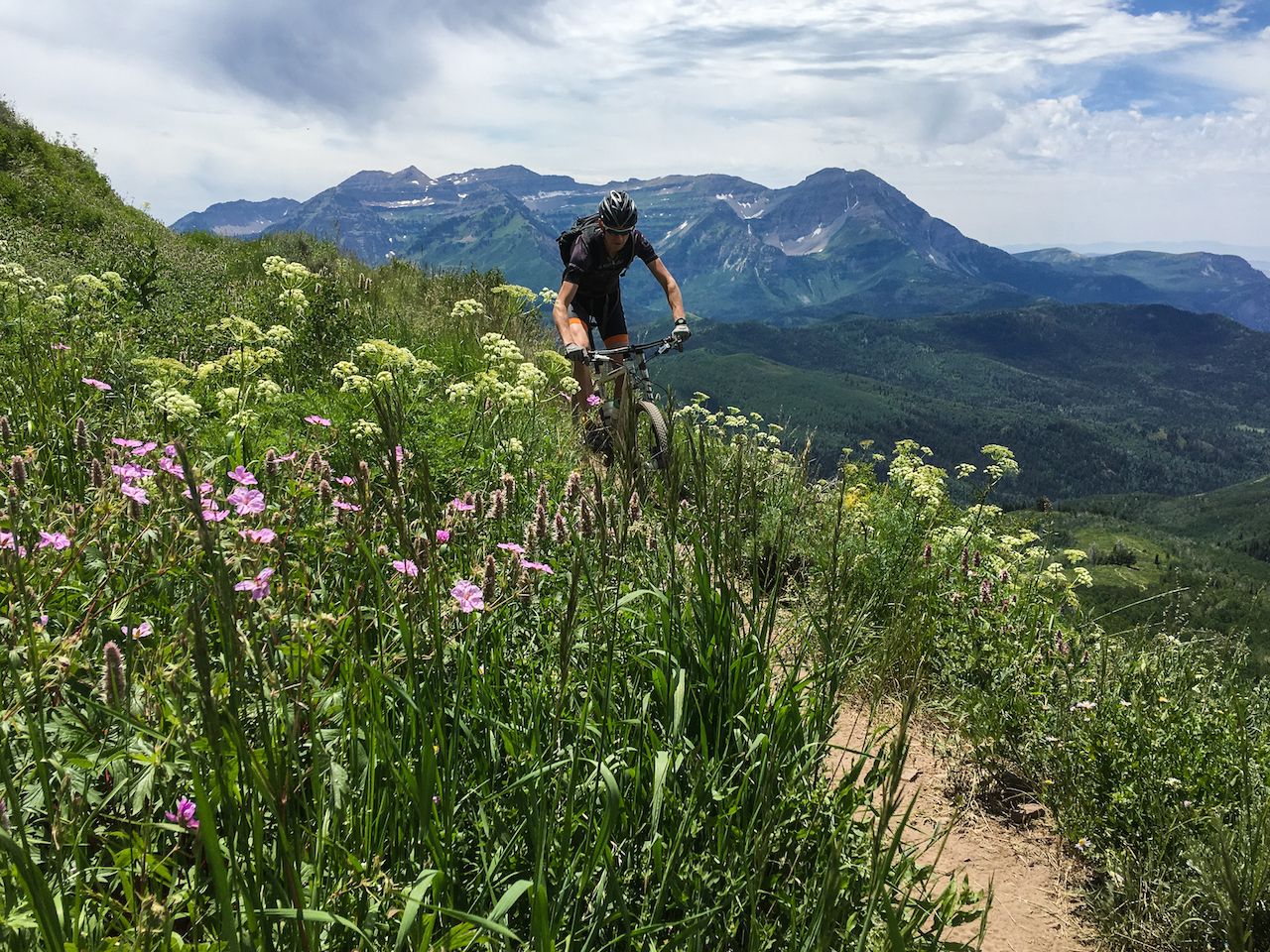 All those trails mean good times for mountain bikers, too. Breck’s seemingly endless singletrack has developed a cult following over the years.

“People come from all over,” Walker says. “Twenty-two years ago, there were a couple trails, and it wasn’t that big a deal. Now, it’s this bike frenzy; everybody’s biking all the time. And that’s just in Breckenridge,” he adds. “You can ride from here to Keystone, Copper, Vail. You can ride forever.”

Assuming you didn’t come to Breckenridge to wind up in Vail, there are still tons of trails that keep it local for riders of all experience levels. Easier trips include the mostly flat, 2.4-mile B&B Trail, which widens to doubletrack at points and only climbs 300 feet compared to the more challenging Burro Trail’s 800 feet. Also moderate, the Galena Ditch to Colorado Trail loop gains 2,251 feet and covers just over 15 miles of the 486-mile Colorado Trail, which connects Durango to Denver. For something tougher, traverse 26 wide open miles on the Wheeler Trail, riding over the Tenmile Range, all the way to Copper Mountain, and back via Frisco. It starts a few miles out from the access road at Peak 9 just outside town.

Breckenridge isn’t just for mountain bikers, though. It’s also great for road bikers and those who don’t know the difference but appreciate a good ride, anyway. The paved Blue River recreation path runs along the water beneath glorious Rocky Mountain peaks, spanning miles of Summit County, seven of which belong to Breckenridge. More serious road bikers may prefer cycling Hoosier Pass or Boreas Pass Road, which connects to mountain biking and hiking trails, too. 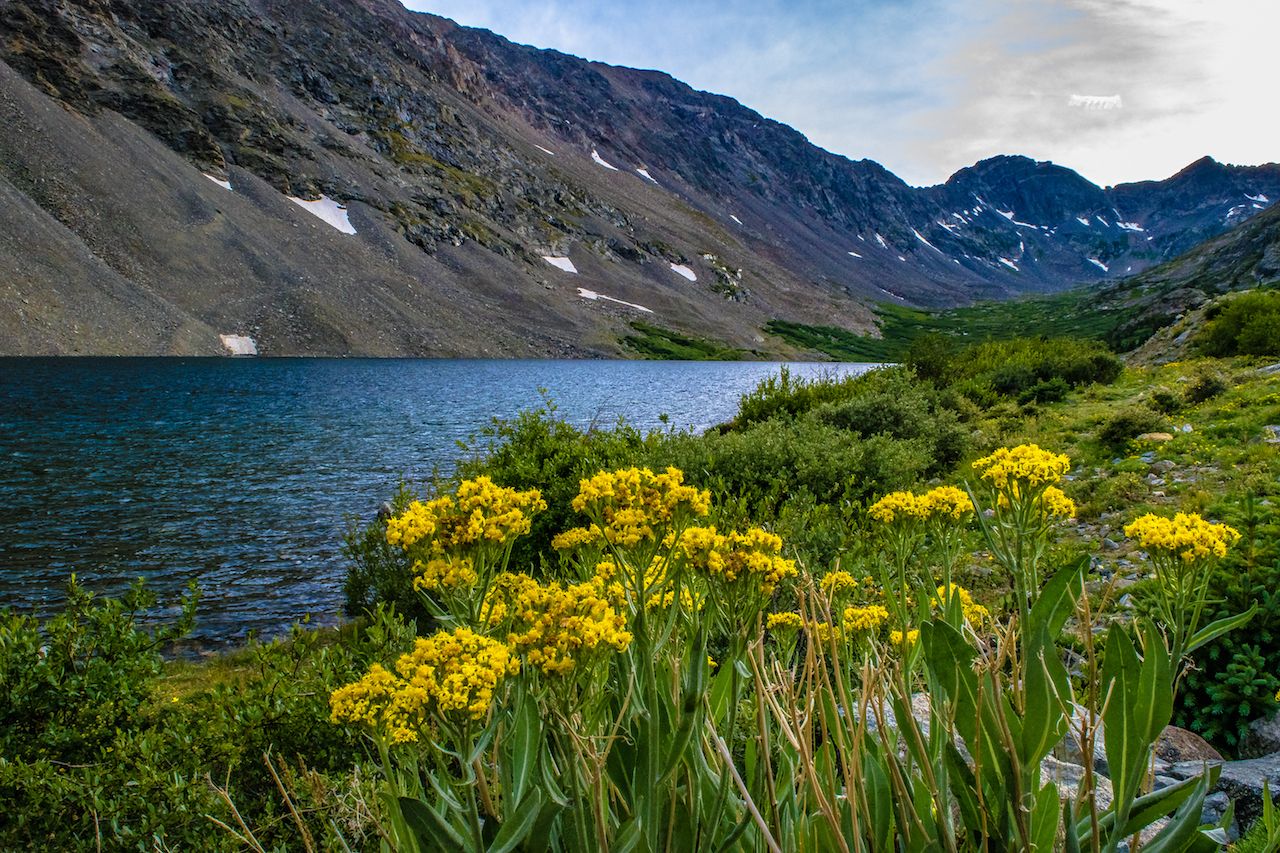 Breck’s wildflowers begin blooming when the snow starts thawing, and they generally peak in July. The forest floor disappears under carpets of lupine, wild chamomile, and columbine, the state flower. Iris blossoms adorn marshes; wild roses spruce up meadows. It’s breathtaking — and, like most things in Breckenridge, a great excuse to hit the trails.

If you make it to Boreas Pass Road, you’ll find meadows gilded with sunflowers in the alpine zone. In fact, most of the trails we’ve mentioned get showered with blooms of their own, whether that’s blankets of yellow arnica flowers or patches of rare fairy slipper orchids. Consider hiking around Cucumber Gulch and Saw Mill Creek for even more floral fireworks. 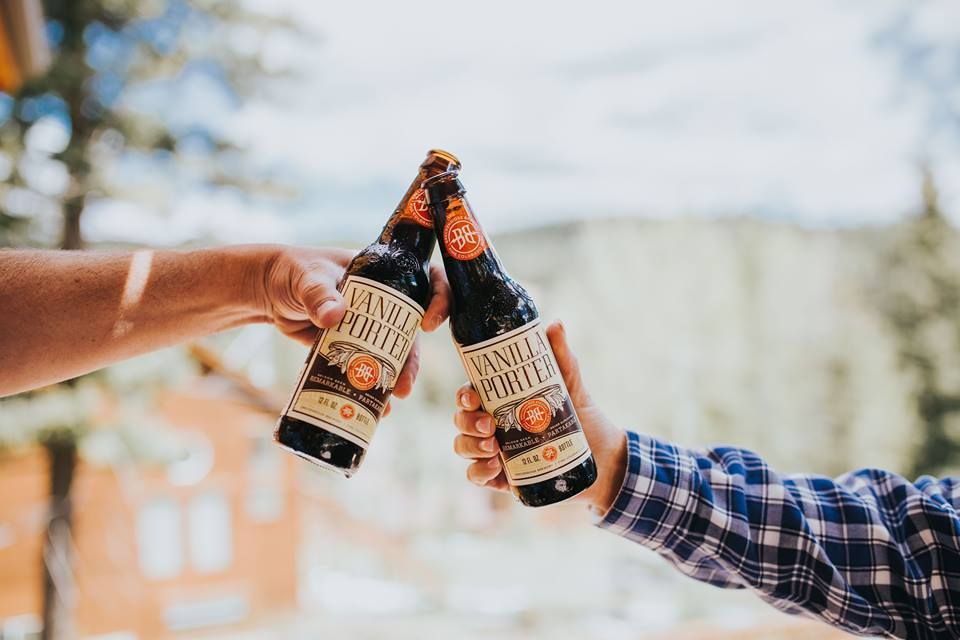 Craft breweries are serious business in Colorado. The beer culture’s strong whether it’s après-ski or barbecue season, but nothing beats a cold brew on a hot summer day, a ritual Breck residents know all about. The state’s third-oldest craft brewery, Breckenridge Brewery, has been a beloved fixture on Main Street for decades. So beloved, in fact, it’s recently expanded to a 12-acre campus in Littleton, about two hours away by car.

After big hikes, locals rely on the downtown location to refuel with a refreshing Summer Pils or Hop Peak IPA and Colorado-style pub fare like elk meatloaf or beer-cheese fries. It’s usually busy and always easygoing, so expect to meet new friends at the bar while the pub’s centerpiece, a row of brew tanks, stores upcoming batches just behind the bartender.

The real heavy-duty equipment is in Littleton, which makes an excellent outing for the Breckenridge-level beer enthusiast. Stop by for a 90-minute tour of the 100-barrel brewhouse and state-of-the-art facilities before a tasting. Stay for lunch in the airy Farm House restaurant, and cap it all off with a game of corn hole on the lawn. To really lean into the Breck lifestyle, cycle rather than drive the 17 miles to Littleton, which connects via a nice, neat trail.

All that said, there are bound to be those for whom trying a new beer with lunch or sampling a flight on a brewery tour still just isn’t enough. To them, we say mark your calendars for the Breckenridge Summer Beer Festival on July 13. More than 40 breweries will arrive outside the Beaver Run Resort & Conference Center to rep their brands as folks bounce from tastings to food stalls to live performances by the Frisco Funk Collective and more.

Plus the highest distillery in the world. 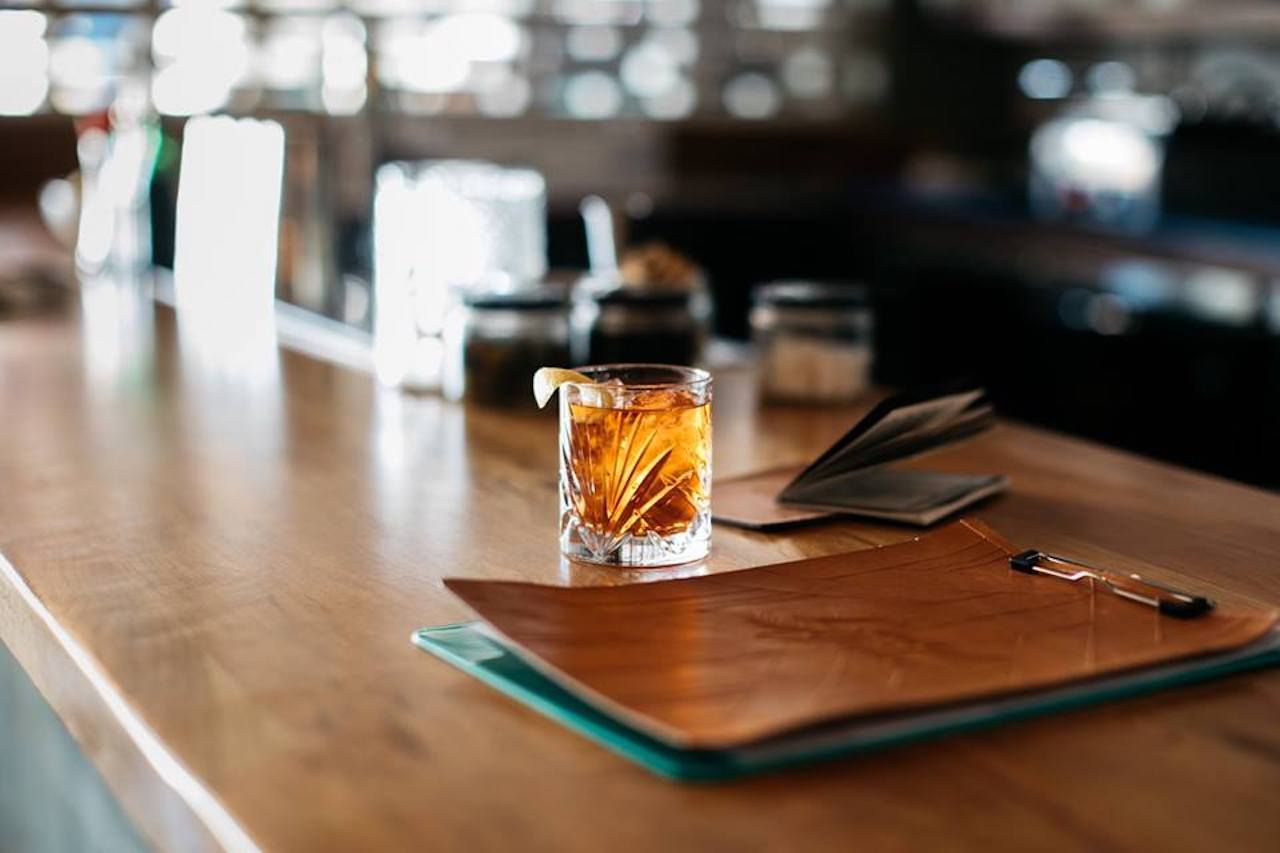 Okay, this isn’t season specific. But if drinking’s your thing, summery Saturday evenings are ideal for upgrading the beer-and-shot combo by downing a Vanilla Porter at the Breckenridge Brewery and then moseying down the street for a sip of bourbon at the Breckenridge Distillery. The impressive elevation may get you in the door, but the whiskey will make you stay.

Whitewater rafting is a lot easier when the rivers unfreeze. 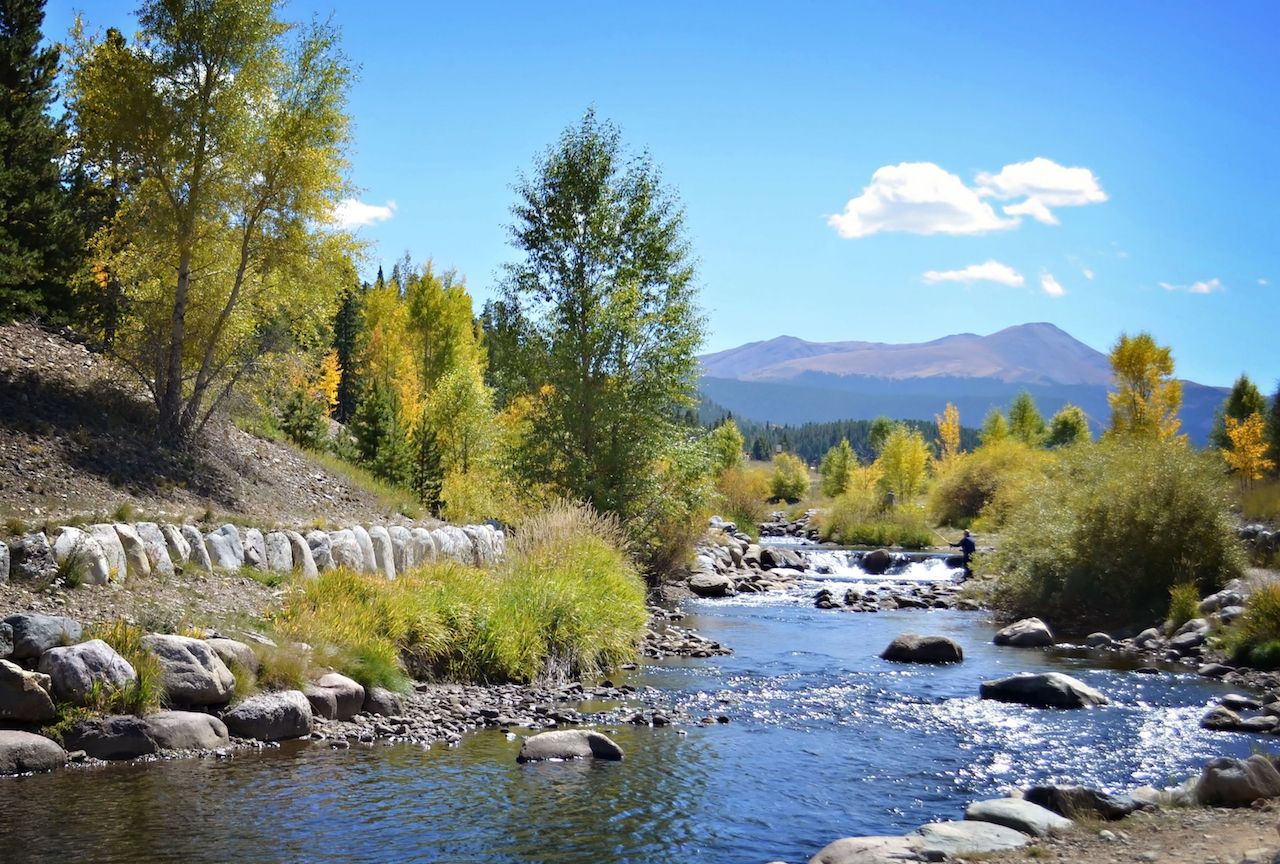 Rafting rockets to the top of many Coloradans’ agendas as soon as the rapids start picking up in spring. Only an hour from the Arkansas River, generator of some of the best whitewater in the state, if not the country, Breckenridge is an excellent choice for rafters of all skill levels. Nearby, the Blue River beckons both seasoned hobbyists and beginners keen on guided trips, which kids as young as three have been allowed to join. Come in June to kick off peak rafting season.

If you aren’t done soaking in the Gore Range scenery after tackling the rapids, switch to fly fishing mode. The Blue River is teeming with trout and welcomes licensed anglers and tour groups. If, on the other hand, it’s more time on the water you want, try stand-up paddleboarding or paddleboard yoga at Maggie Pond, created from the Upper Blue River.

The events calendar is stacked from June to August. 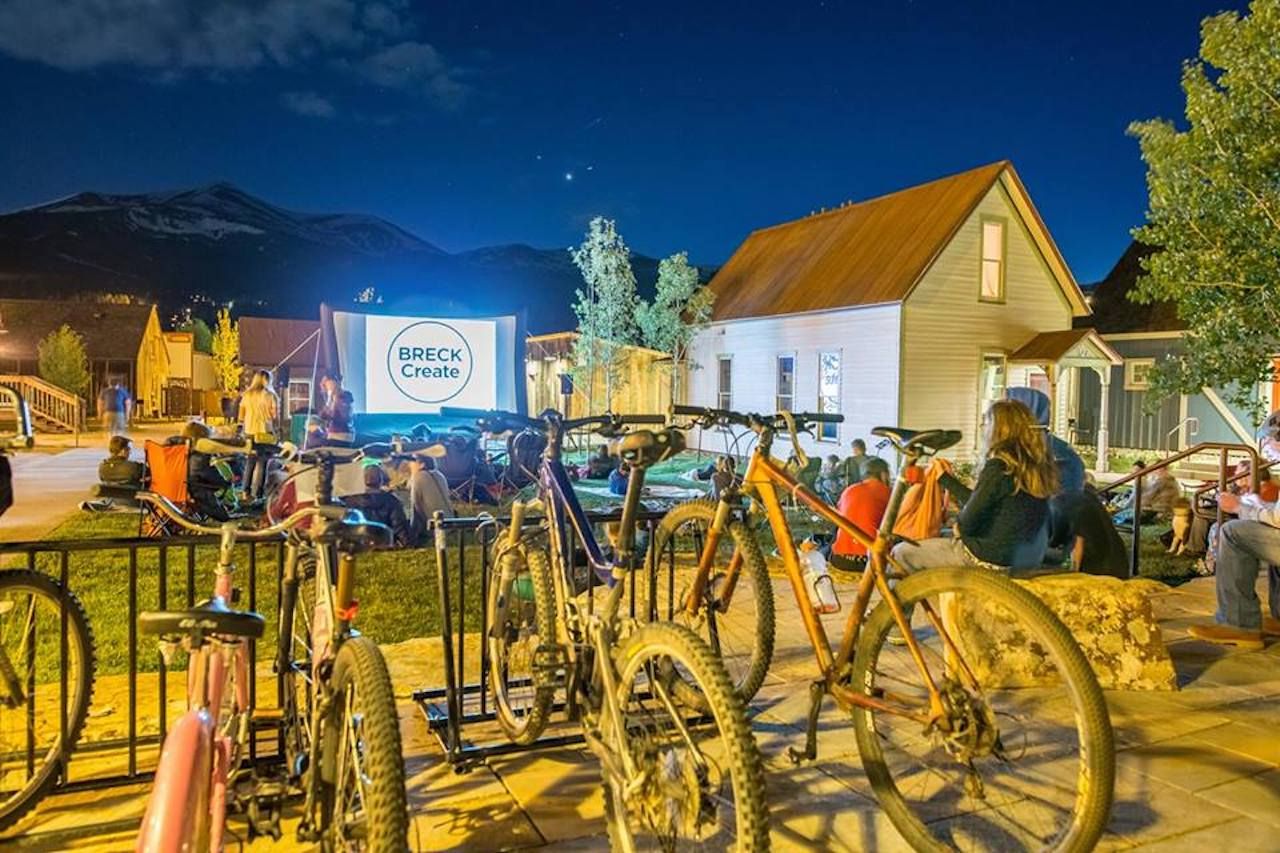 Breck doesn’t just perk up in summer because everyone’s excited to shed their thermal underwear and go patio surfing. There’s also a lot going on, from food and wine tastings to art exhibitions and live music — even a Gold Panning Championship.

This year, the WAVE Light + Water + Sound festival will kick things off from May 30 to June 2. Artwork including an interactive lightbulb installation and large, lacey wire sculptures will take up residence around Blue River Plaza, to be admired when attendees of the free event aren’t at a short film screening or listening to music, be it a pop-up orchestra or an audio installation.

On August 9-18, the Breckenridge International Festival of Arts will double down on the music, film, visual arts, and dance. Not just any dance — think aerial performances by vertical dancers who use the sides of skyscrapers, heritage sites, or, in this case, mountains as their stages. Other festival highlights will include riverside yoga and remedial environmental installations by eco-artists Mary O’Brien and Daniel McCormick.

Not just beer geniuses, the folks at Breckenridge Brewery also put on a summer concert series in Littleton called On Tap with KBCO. This year, Guster and St. Paul & The Broken Bones will liven up Brewery Lane on June 30, and Dawes and Moon Taxi will play August 10.

In between art and music extravaganzas, class it up at the Breckenridge Food and Wine Festival on July 26-28. Tastings will feature 300 wines from around the world, representing more than 70 wineries from Spain to New Zealand. Later, balance the scales with bacon and bourbon pairings at the Breckenridge Hogfest on August 23-25. Oh, and don’t forget that beer fest in July.

The most epic day trips from Denver you need to take
Tagged
Outdoor Travel Trip Planning
What did you think of this story?
Meh
Good
Awesome