Unlike many rafting trips that start with epic views of a big mountain objective, the put-in on the Owyhee River is unassuming. The start of this classic excursion lies at a small, grassy landing at the end of a dirt road near a tiny speck of a town called Rome in eastern Oregon. This Bureau of Land Management (BLM) land has more open-range cows than humans — but don’t let this fool you. The Owyhee, not far from the border with neighboring Idaho, is one of the best-kept secrets in the country, visited mostly by locals and in-the-know river-riders in the Pacific Northwest. If you only plan one rafting trip this summer, this should be it. Here’s how to make it happen.

Where is the Owyhee River? 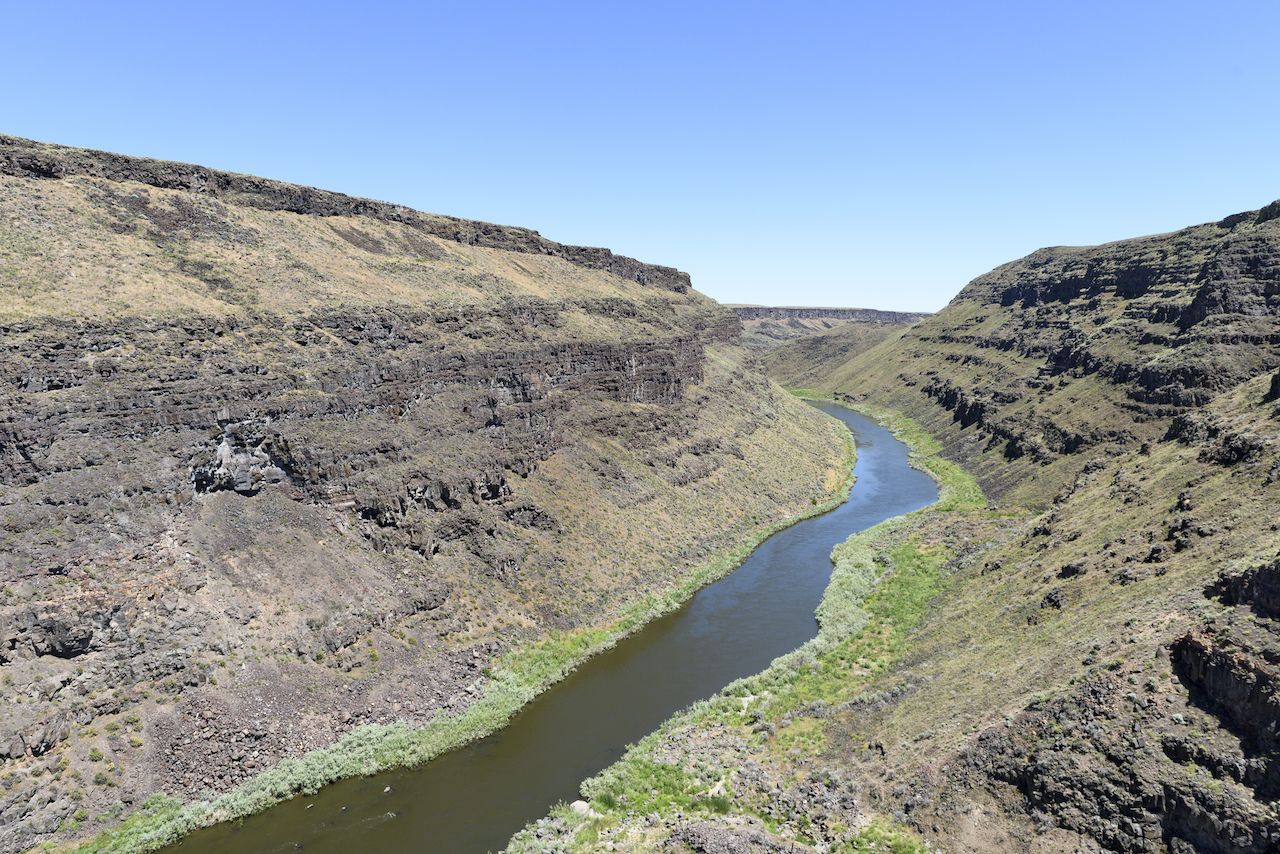 A winding, snow-fed roller coaster on the border of Oregon and Idaho, the Owyhee flows north and sits deep in a canyon often referred to as the “Little Grand” by locals. Due to the remoteness and lack of information about it online, it’s rarely paddled, despite being one of the best Class III-IV runs in the country. Most of eastern Oregon is a remote high desert, with no major cities and few towns.

This is one of the largest undeveloped areas in the lower forty-eight, similar to west Texas or desert parts of Utah and Nevada. To many, the ruggedness is one of the biggest draws to the area. A rafting trip here is the perfect chance to escape civilization for a few days and revel in the sounds, smells, and silence of the natural countryside.

Most of the vegetation is low-lying sagebrush and other similarly hardy plants. As you paddle downstream, the walls of the canyon grow, eventually hanging a thousand feet above you. The entire Owyhee is 346 miles long, from its headwaters in northern Nevada, through southern Idaho, and to its entry into the iconic Snake River in Oregon. In the canyon, you’ll see juniper and willow trees, as well as many types of grasses. If you get lucky with timing in the spring, you may catch full bloom when the canyon is covered in various colors. 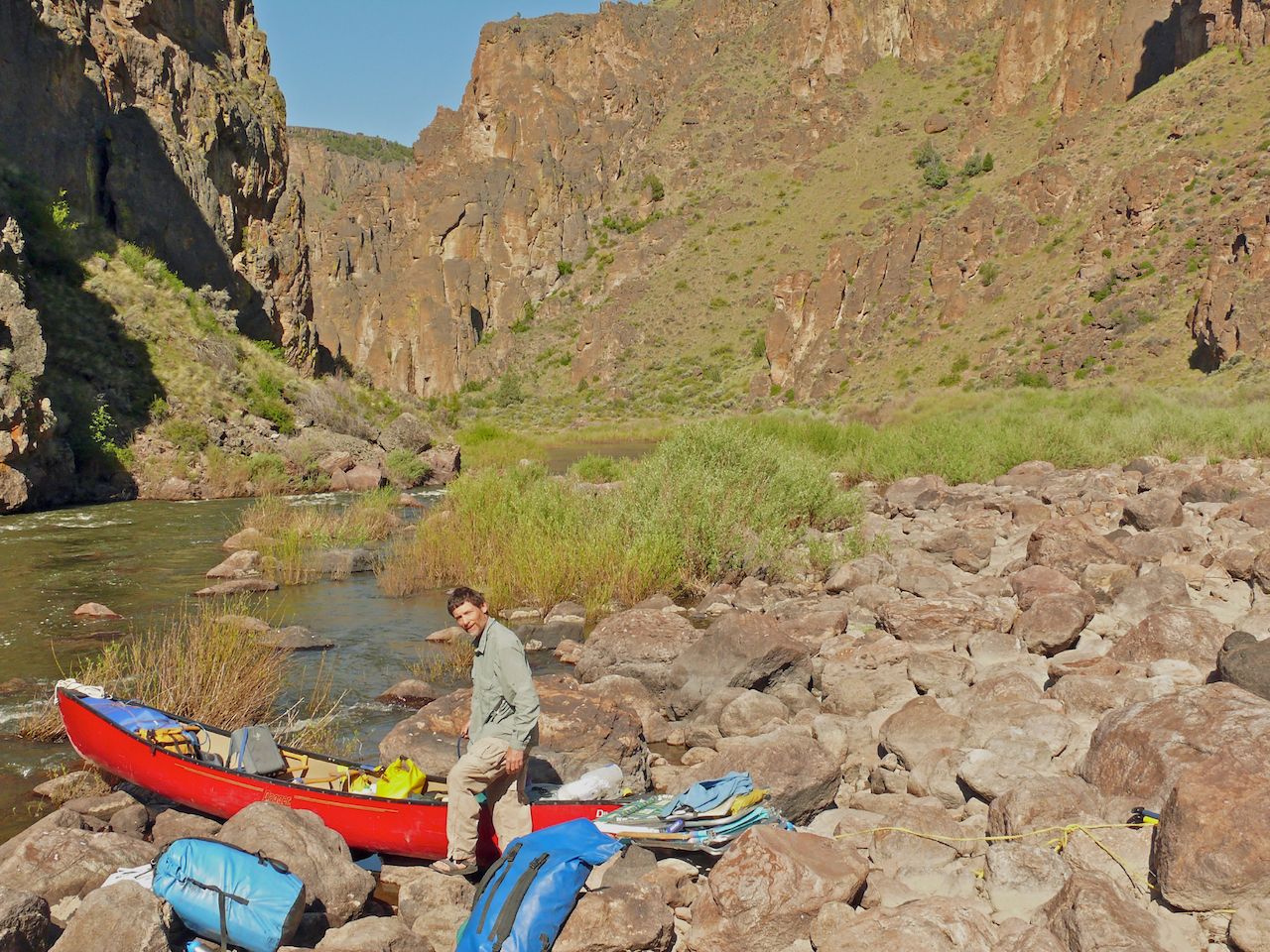 The best time to paddle the Owyhee is throughout May and June when the water level is highest. If you’re early enough, you might just catch the full bloom, but the canyon is photogenic no matter when you’re there. The ideal route takes you through the section of the Lower Owyhee from Rome to Birch Creek, which runs 48 miles. This route sends you through one of the most scenic and stunning stretches of the canyon, with various colors of rock stacked on both sides of the river.

Paddling the route typically takes three to five days from start to finish, depending on your skill level and how often you decide to get out of the boats to hike side canyons. Many other options for off-shoot river trips exist for folks who want to explore further into the side canyons and runoffs. Trips are possible on multiple forks and tributaries of the Owyhee, many of which could be attached to the main path for excursions longer than a week.

The brand Oregon River Experiences has made a full list of put-ins and maps, which you should reference when planning ins and outs, and where to camp each night. For all of these, flows are critical, as they often dry up in sections as the season progresses. Of course, because of the remoteness of the entire river, don’t expect cell service or help from outside. Proper planning is critical.

Weather-wise, take note that, like most canyons, temperatures can range dramatically. It’s not uncommon to experience both below-freezing lows and highs in the 90s or higher, even in the same day. It’s important to plan accordingly — bring multiple layers, spare clothes, and pack your stuff into dry bags when on the river. The Owyhee is well known for unpredictable weather year-round, often changing 40 or more degrees from day to day. Sunscreen is a necessity. 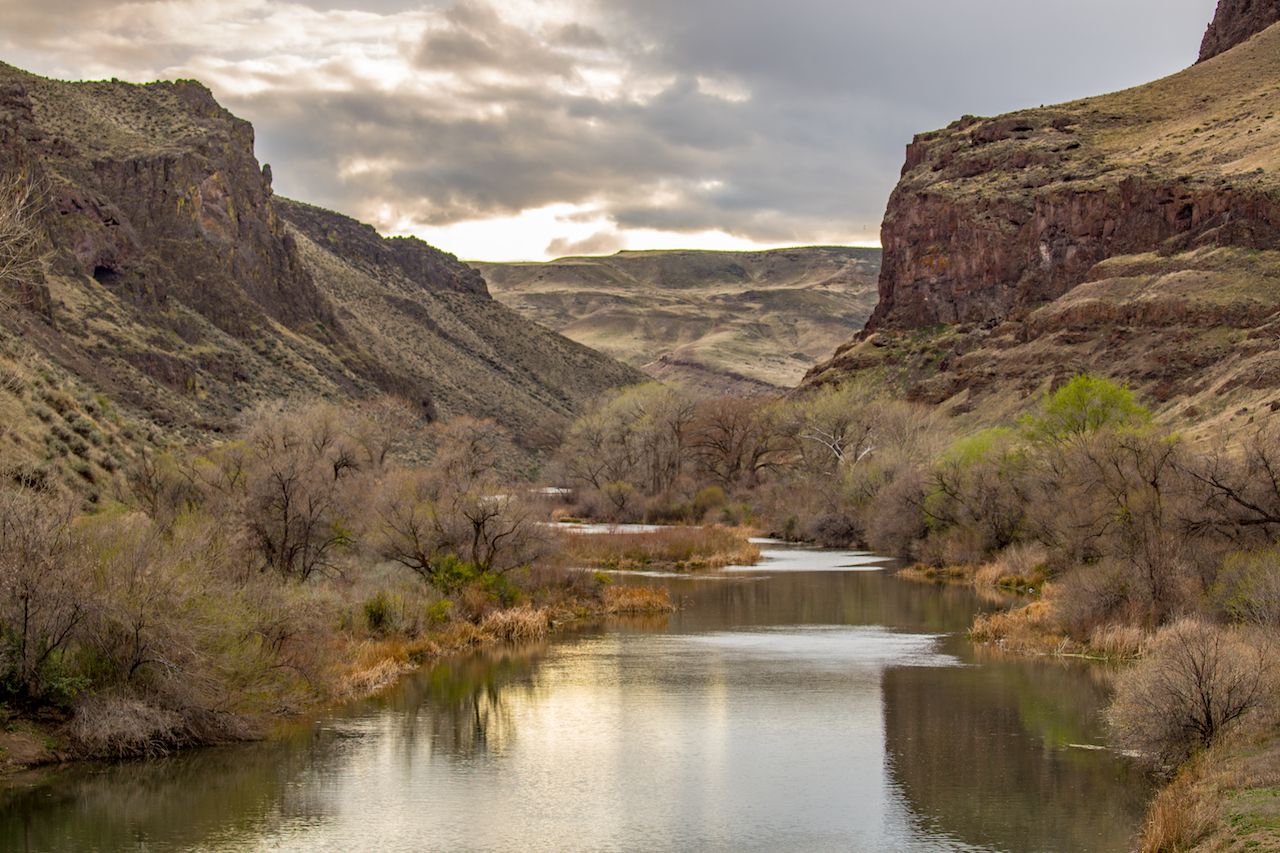 For private trips, permits are relatively easy — as self-registration through the BLM. Designated as a Wild and Scenic River in 2009, the Owyhee River is surrounded by over a half-million acres of protected wilderness. The protection of this area took 30 years, largely due to mining and grazing interests that fought to keep the land in private hands. The full run-down on permit information and regulations is available from the BLM.

Dozens of options for places to camp lie along the river, from sand bars to grassy knolls. Hike-out Camp at mile 14 is a great site for the first night, with a trail up the canyon to the rim. Lambert Dome at mile 26 is a great second night, with some of the best views of the canyon, or continue to Point Canyon around mile 31. At mile 43 you’ll paddle past hot springs on your left, just upstream from Greeley Bar Camp. Stays here are limited to one night.

Shuttling cars between the put-in and take-out requires that you have two vehicles, ideally both of which are four-wheel drive. The road to the put-in and take-out can be rough, and it takes about two hours to drive between the two. Some of these roads can be closed after a big storm, though you won’t want to be on the river if a big storm comes in anyway. That said, beware the risk of the getting your car stuck in the mud. And despite remoteness, don’t leave valuables in your car. The closest airport is Boise, roughly two hours away. Bend, Oregon, is four hours away and Portland is roughly seven hours by car. 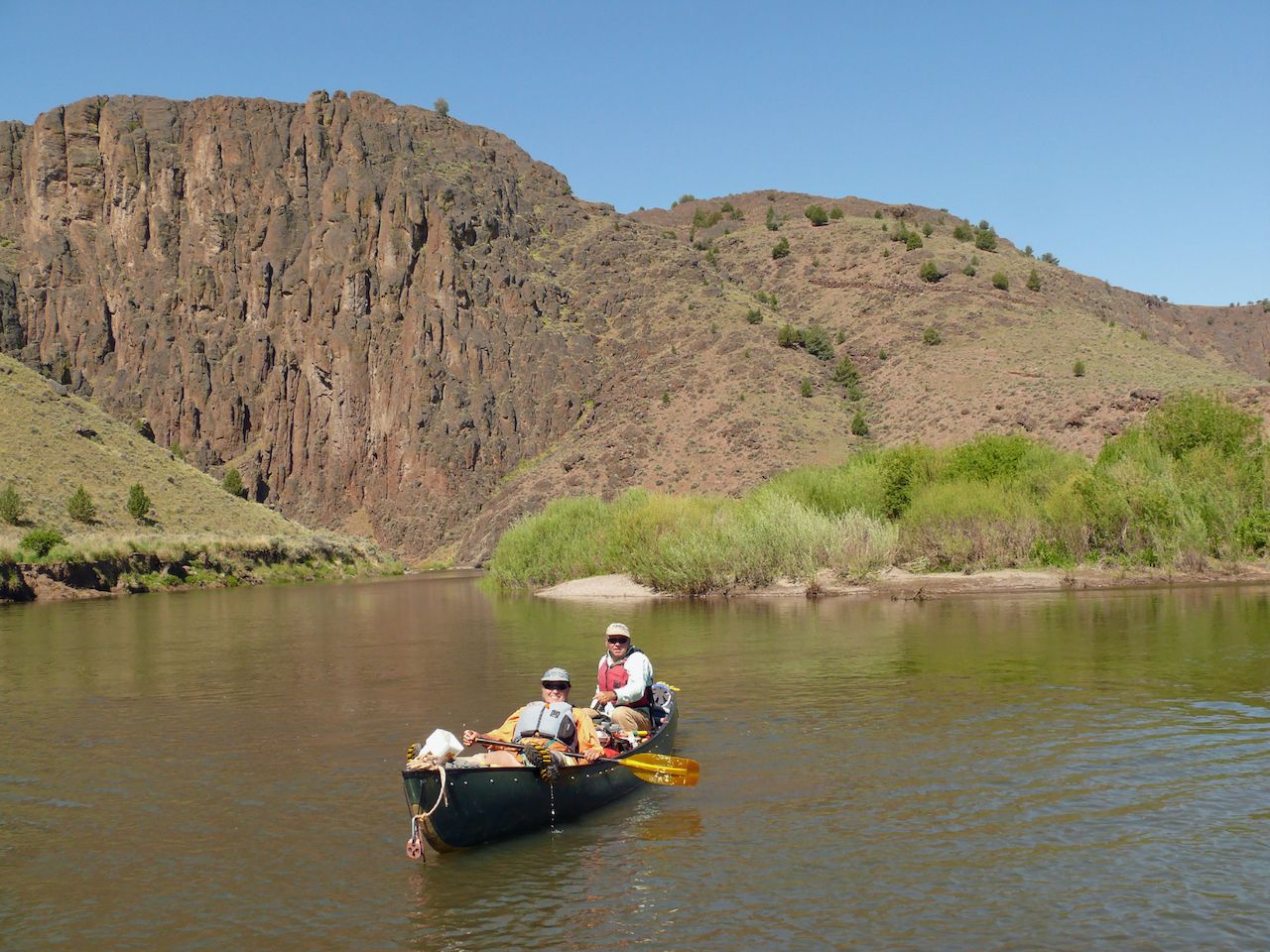 Because the river is snow-fed, the water volume changes dramatically over the course of the season, and sometimes even over the course of a week or two. The section from Rome to Birch has a gradient of 15 feet per mile (fpm) and in most flows is rated Class III. This section has a handful of technical and potentially dangerous rapids, so it’s imperative to have experienced paddlers and guides along.

We recommend flows above 1,000 cubic feet per second (cfs) up to 2,000 for kayaks, and up to 5,000 for rafts. Anything below this could mean walking some sections, as well as a higher risk of pins on rapids. Plus, the river is considerably more technical in low flows because there are more hazards to navigate around. Be sure to check the water gauge before you go to make sure the river is at a safe and navigable volume. 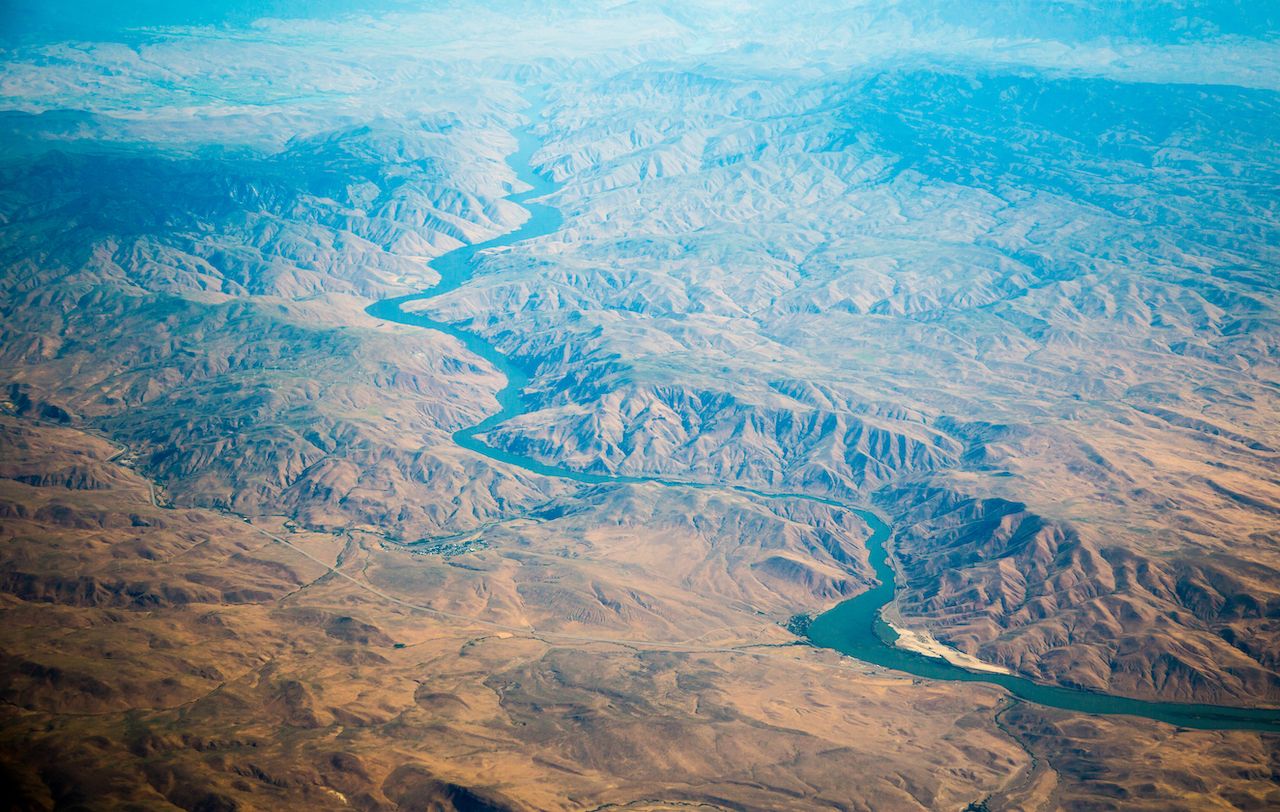 The river starts in a flat, braided section, surrounded by old ranch lands. The first major rapid is Bullseye, 13 miles downstream, a Class IV set. Eight miles downstream you’ll run into Read-it-and-Weep and Artillery Rapids, in quick succession; both are Class III. At mile 31 you’ll run Whistling Bird, a Class IV that’s dangerous at lower flows. We recommend scouting well before running. The most technical rapid on this section of the river is Montgomery, a Class IV that’s both long and complicated. The last few major rapids are Nuisance and Morcum Dam, both around mile 38. These are rated Class IV at lower flows.

Although it’s not renowned for its wildlife, the area is a safe haven for many birds, including golden eagles, hawks, geese, and a collection of songbirds. It’s also not uncommon to see beavers, otters, coyotes, deer, and bighorn sheep as well. Keep a camera handy in your drybag if wildlife spotting is your thing, though the water is often choppy and needs your full attention.

Like any expedition river trip, packing the right gear is essential. The Owyhee can be paddled with a hardshell or inflatable kayak, raft, or even a canoe — for those very proficient in whitewater. Every person on the trip should have a personal flotation device, a paddle, a spray skirt, and whistle. Depending on the weather, you’ll also want a dry top to stay warm.

For clothing, you’ll want a sun hat, sunglasses, and buff to wear during the day when the sun is out. Shorts are helpful too, as you’ll find yourself getting wet from time to time. Additionally, bring paddling gloves, a wicking shirt, a warm fleece or puffy jacket, neoprene footwear, and long underwear. Wool socks and a wool hat are ideal as well. Smaller items to bring along include sunscreen, a first aid kit that can pack into your dry bag, insect repellent, water bottle, and water treatment. You’ll want a backpacking setup that can come with you on the river, including camping and cooking supplies like a tent, sleeping bag, stove, cookware, and utensils.

If you plan to fish, bring fishing gear and your permit. Ample springs along the river are easy places to fill up bottles. Keep an eye out for small springs in rocks, all the way down the river. Despite a dry ecosystem, if you stay vigilant, drinking water will not be a problem. We recommend that everyone packs dry bags because of the volume of whitewater and high consequence due to remoteness. A paddle float, paddling knife, bow and stern lines, waterproof maps, sponge, pump, and float bags will keep your boat in order and on the right course. Two-way radios, GPS devices, and satellite text messenger are also highly recommended.