Quito is a brightly hued city in the highlands of Ecuador that is drawing ever more visitors, most of whom use the city as a base for day trips to sprawling Andean landscapes — most notably Cotopaxi National Park, one of Ecuador’s stunning highland preserves. But the park is just a glimpse of the spectacular landscapes hidden within the Andean highlands. The region is splashed with hundreds of remote, scenic lakes, many of them volcanic origin. And these startlingly beautiful bodies of water are perhaps Ecuador’s best-kept secret. 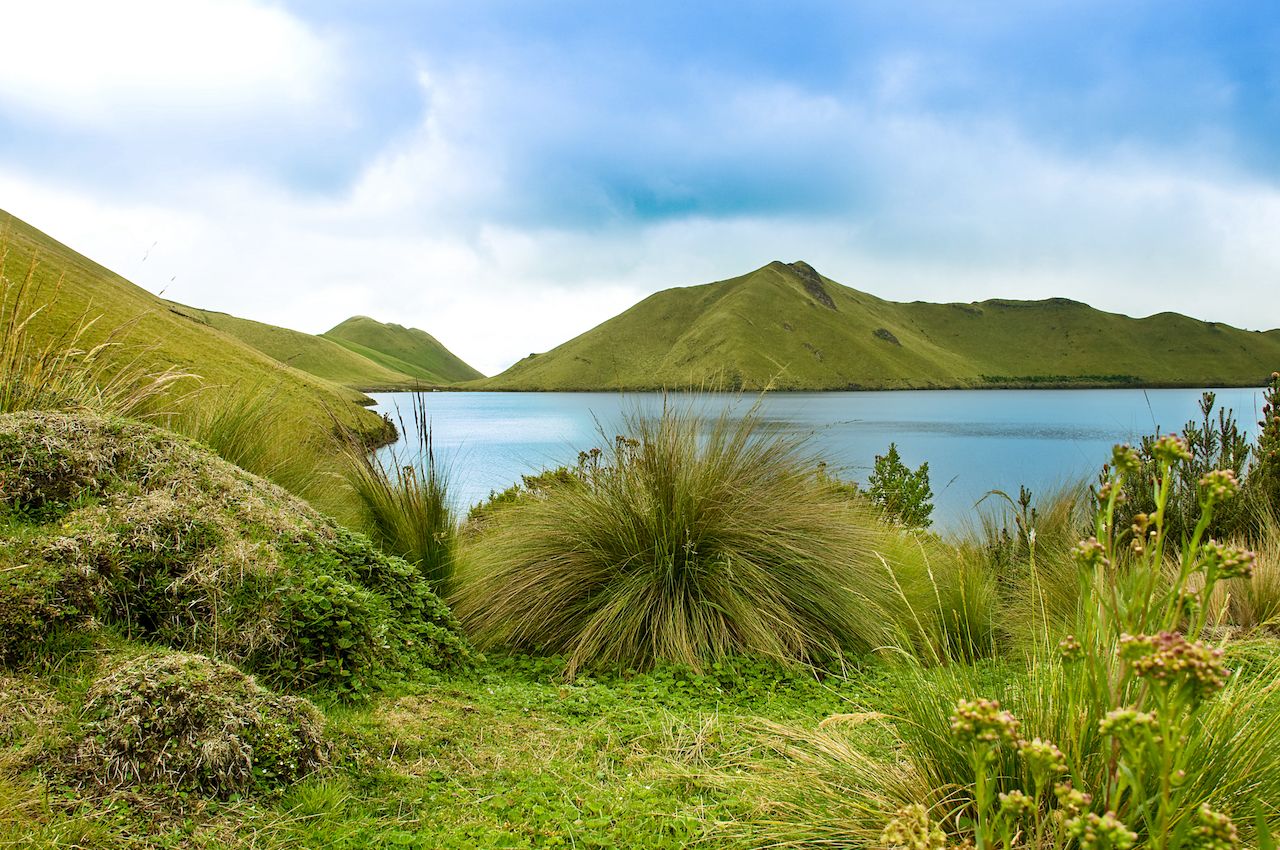 South of Otavalo, home to a beloved and colorful textile market, is a trio of less-visited, mind-bogglingly beautiful lakes called the Lagunas de Mojanda. Due to their remote, dirt-road access, they are the least frequented lakes on this list. But their expansive waters surrounded by Ecuador’s high-altitude paramo grasslands are a sight worth going out of the way for.

The three lakes are named in the native indigenous language as Caricocha (Man Lake), Huarmicocha (Woman Lake), and Yanacocha (Black Lake). Each is independently breathtaking, with layers upon layers of natural colors — from inky interior waters to clear Caribbean-like beaches, and all of it framed by the mysterious and cloudy Andean peaks.

Among the best ways to appreciate the cluster of lakes is through hiking or camping. The area surrounding the Mojanda Lakes is one of the few officially approved wild camping sites in Ecuador. However, the Andean moorlands can be both windy and cold with unpredictable weather. Therefore, wild campers should be adequately experienced and prepared for remote high-altitude camping before pitching a tent here. Otherwise, the three-hour hike up the Fuya Fuya volcano is suitable for most ability levels. It offers expansive views of all three lakes and the surrounding Imbabura, Cotacachi, and Cayambe volcanos. 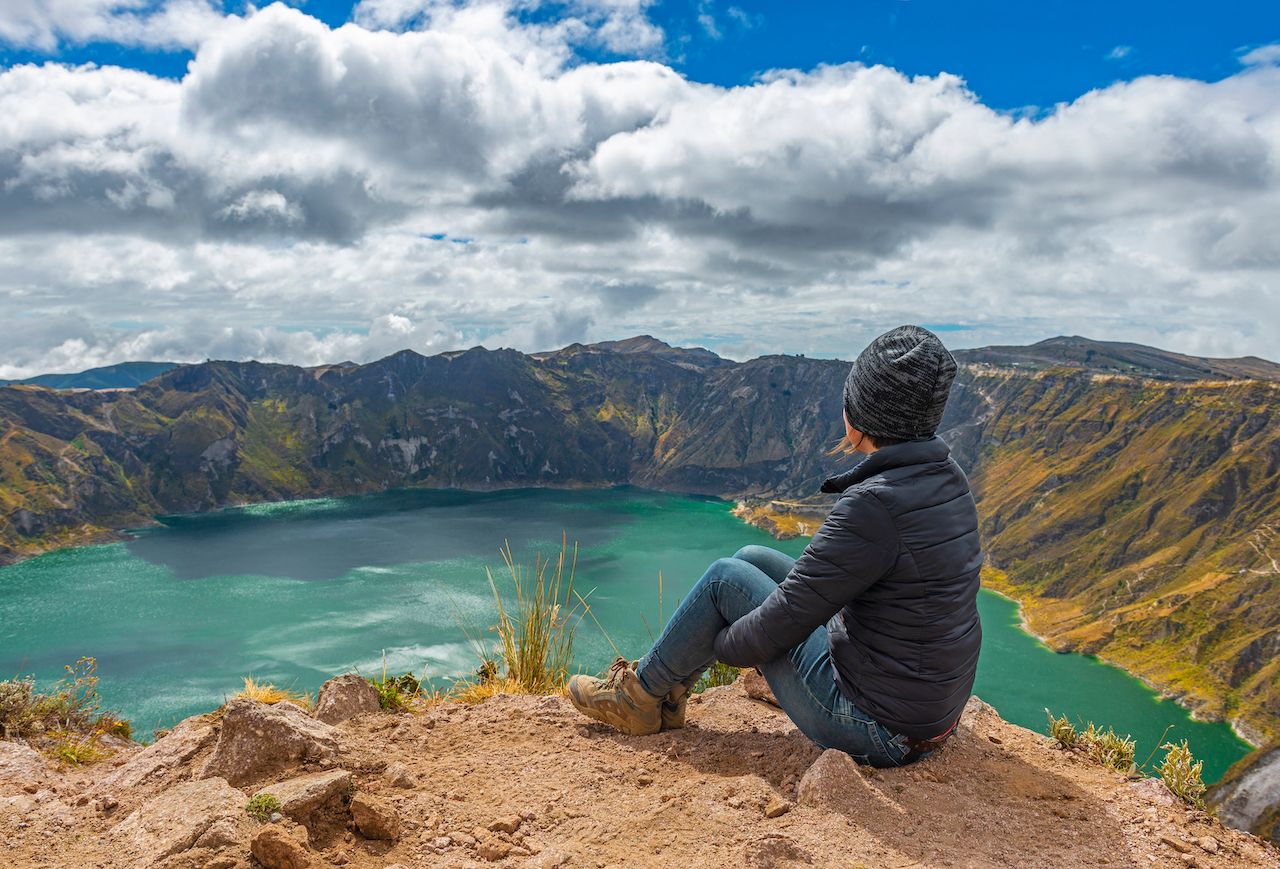 Hidden away in the Andes range about three hours southwest of Quito, Quilotoa lagoon is a two-mile-wide caldera that offers a majestic perspective of the Ring of Fire (the 25,000-mile-long string of volcanoes along the Pacific Rim in the Americas and Asia). The jewel-colored lake sits in a bowl-like crater crowned by a fringe of jagged peaks formed during its eruption some 3000 years ago.

The vibrant blue and green hues of the water are a result from continually dissolving volcanic minerals. Still, the seemingly color-changing properties of the lake are mostly credited to variations in overhead sun and cloud cover. The acidic content of the water doesn’t invite an abundance of species — it’s mainly comprised of algae and microorganisms — and is not suitable for swimming. Even so, the calm, majestic pool is ideal for a heavenly kayaking experience. But, perhaps the most significant draw for adventure-minded folks is the variety of hiking, horseback riding, and llama trekking trails that flank the lake.

However, the Quilotoa lake is perched a dizzying 12,000 feet up in the Andean mountains, so acclimation and appropriate consideration for high-altitude hiking are essential. The main trails include the multi-day Quilotoa Traverse, the four to five-hour Quilotoa Loop tracing the crater’s rim, and the steep 30-minute downhill hike from the viewpoint to the water’s surface. 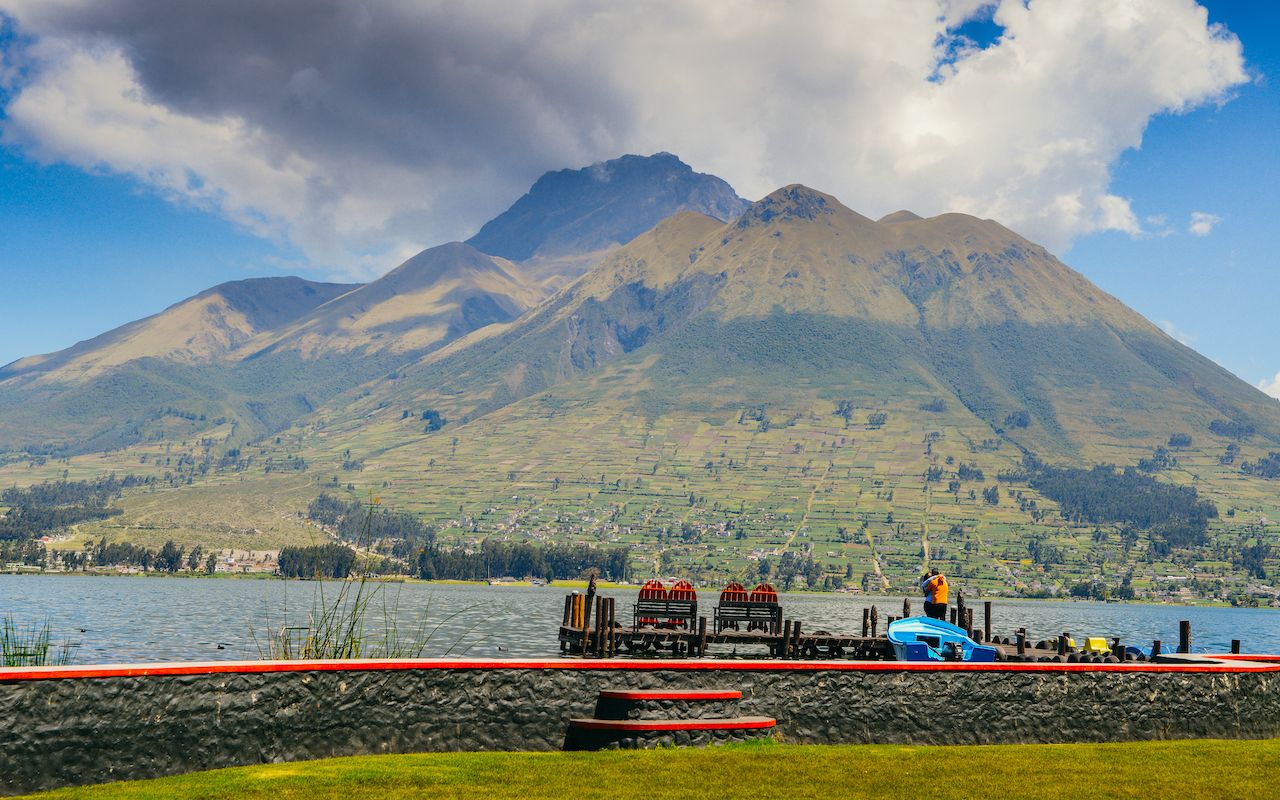 Heading northeast of Quito en route to the Otavalo textile market mentioned above lies the glistening San Pablo Lake. The surrounding area juxtaposes rolling crop fields and towering volcanoes with a sprinkling of hostels dotted in between. And part of this lake’s allure is the distinctly local vibe compared to others in the area. It’s a place to pause for nostalgia’s sake to relish in the scenes of families rowing traditional reed boats, children learning to sail, farmers bringing their cows to the shoreline, and perhaps even a hot air balloon drifting by. Then, come September, the locals gleefully take an annual plunge into the frigid water during the traditional Yamor Festival — a sight definitely worth seeing.

Alongside the cultural charm, San Pablo Lake is also a nature enthusiast’s dream. It’s a bountiful destination for hiking, biking, rowing, and horseback riding. Beyond the lake, explorers can also seek out trails to the hovering Imbabura Volcano, the hidden Peguche Waterfall, or the thousand-year-old tree named El Lechero.

In addition, the 1400-acre San Pablo Lake harbors a vibrant array of birds and aquatic species that beckon birding enthusiasts. They come here to glimpse the Andean condor, blue-billed Andean ruddy duck, herons, coots, sandpipers, and dozens of hummingbird species. But that’s not all. The nearby Condor Park is a must-see, particularly for anyone curious about birds of prey. It’s a bird sanctuary dedicated to the rescue and conservation of owls, hawks, falcons, and condors. 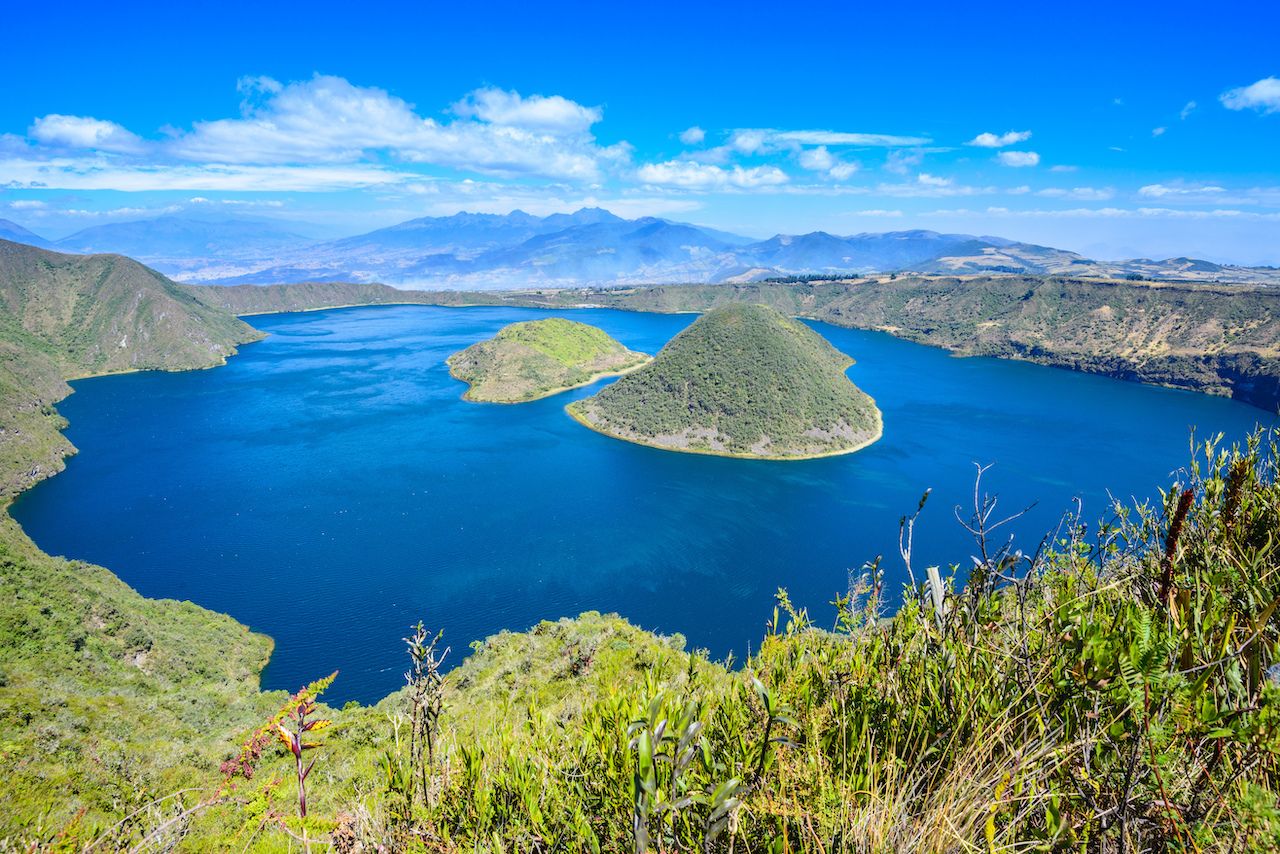 About 30 minutes west of Otavalo and nearly four hours from Quito, a day trip to the Cuicocha Crater Lake is the farthest one from the city. It’s a lake destination especially desirable for the conservationists at heart, as it lies within the Cotacachi-Cayapas National Reserve. It’s one of nine ecological reserves in Ecuador, dedicated explicitly to conserving biological diversity. And for this area, it means the volcanic grasslands, Cuicocha Lake, and islands are among the most pristine in the Andes.

Cuicocha is a deep and sprawling crater lake with impressive green cliff walls and two forested lava dome islands formed during a volcanic explosion thousands of years ago. The islands are protected from foot traffic, and the water is too alkaline for swimming, but Cuicocha Lake is well-known for its outstanding boat tours. The tours navigate through the fascinatingly clear and still bubbling waters before bobbing through canals and skirting along the island shores in search of wildlife.

Miraculously, despite their isolation within an inhospitable lake, the islands thrive with rare and endemic species including frogs, crayfish, snakes, and insects. But Cuicocha Lake’s most famous inhabitant is the silvery grebe, a diving bird only found in South American freshwater environments exceeding a whopping 13,000 feet in elevation.

The boat tour is inexpensive and lasts less than an hour, making it the perfect complement to the spectacular hike that loops around the crater rim. The Cuicocha Lake Trail is seven miles long and can take four to six hours to complete. It’s particularly appreciated for its isolation and immersion into alternating paramo and forested landscapes beneath the Cotacachi Volcano. And of course, for the elevated, panoramic views of the Cuichocha Lake and islands.

Insider GuidesEcuador Packs the Most Adventure Into a Small Space Better Than Anywhere Else in South America
Tagged
Hiking National Parks Ecuador
What did you think of this story?
Meh
Good
Awesome

This Artist Lends a Voice To Those Who Are Less Heard, and the Results Are Stunning