Japan has a vibrant barbecue scene, though it’s less popular in the West than Korean barbecue. In Japan, grilled beef of all stripes is called yakiniku. This culinary tradition is relatively new, and deeply enmeshed in Japan’s religion and politics.

Barbecued meat didn’t gain widespread popularity until around 1945 during Japan’s Shōwa period, but its history dates back to 1872. That year, Emperor Meiji committed a highly controversial act: He ate a piece of beef in public. For nearly 1,200 years, eating meat of any kind (except fish, a central element of Japanese cuisine) was illegal in Japan. The reasons are complex, but, put simply, Buddhism dictates that humans can be reincarnated as any living creature. You risked eating an ancestor if meat figured into your diet. There were practical reasons for the meat ban too. The Japanese received most of their nutrients from seafood and rice, and animals like cows that could otherwise be consumed were useful for farming.

In 1868 Emperor Meiji assumed power and abruptly ended Japanese isolation, welcoming, for the first time, outside influences. This included influences from Korea and China, where meat was (and still is) a dietary staple. It would, however, take generations for grilled meat to take root in Japan.

The end of World War II also marked the 35-year occupation of Korea by Japan. Around this time, yakiniku first emerged as an adaption of bulgogi and galbi, when Koreans who had lived most of their lives in Japan began opening restaurants serving grilled meat.

Yakiniku’s popularity grew through the ’80s and ’90s, when beef prices dropped. However, tense trade relations between the United States and Japan over imported beef, coupled with the dominance of the original Korean barbecue, may be at least partly responsible for its underappreciated status in America.

Now, Japanese barbecue restaurants are starting to pop up in the US more and more. Here’s what to know before going.

What to order at a Japanese barbecue restaurant 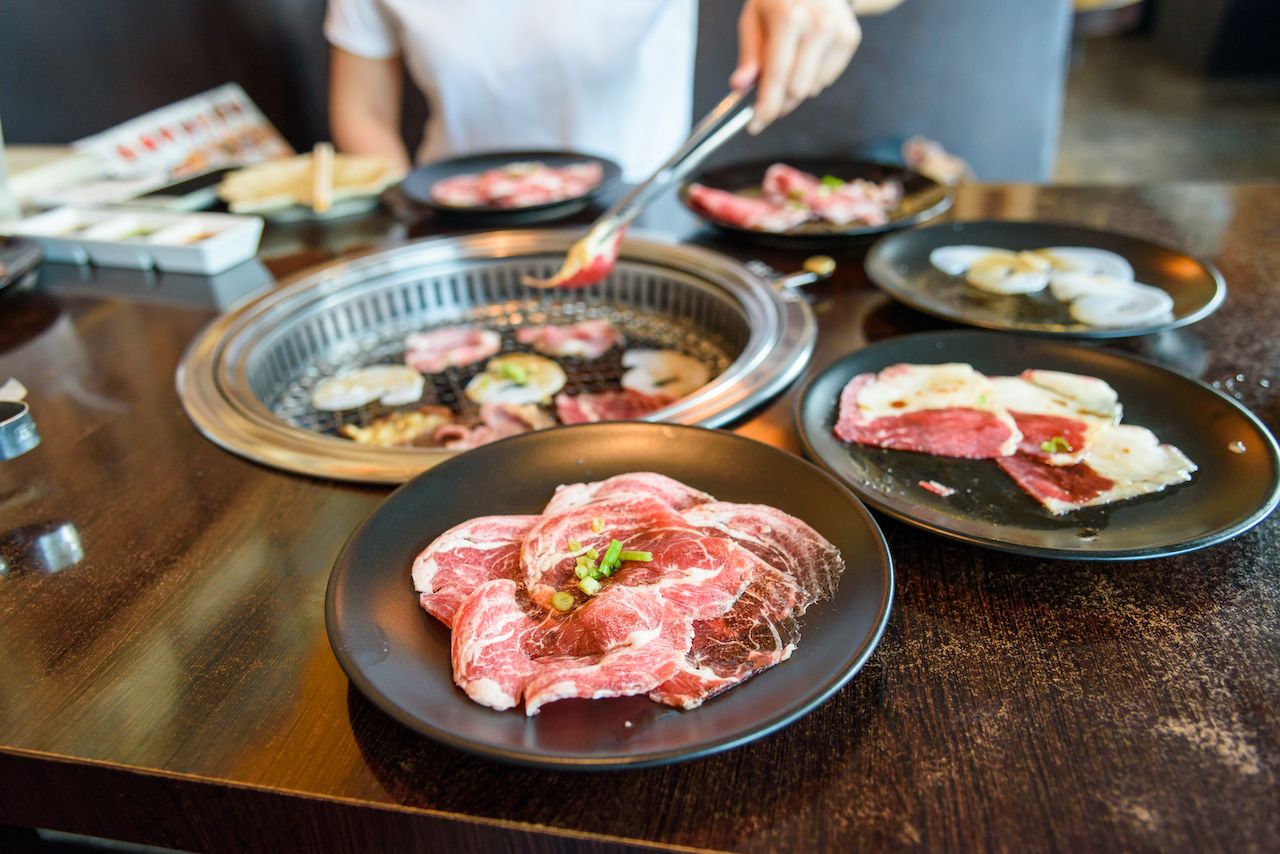 As in a Korean barbecue restaurant, you’ll order various cuts of meat to grill at your table. Side dishes like miso soup, eggplant, kimchi, and rice are also eaten with yakiniku. Keep in mind that the most traditional yakiniku restaurants will only serve beef — no pork or seafood.

The grill itself looks a little different than what you’ll encounter at a Korean barbecue restaurant. Yakiniku grills are circular and sunken in the center of the table.

How to order yakiniku 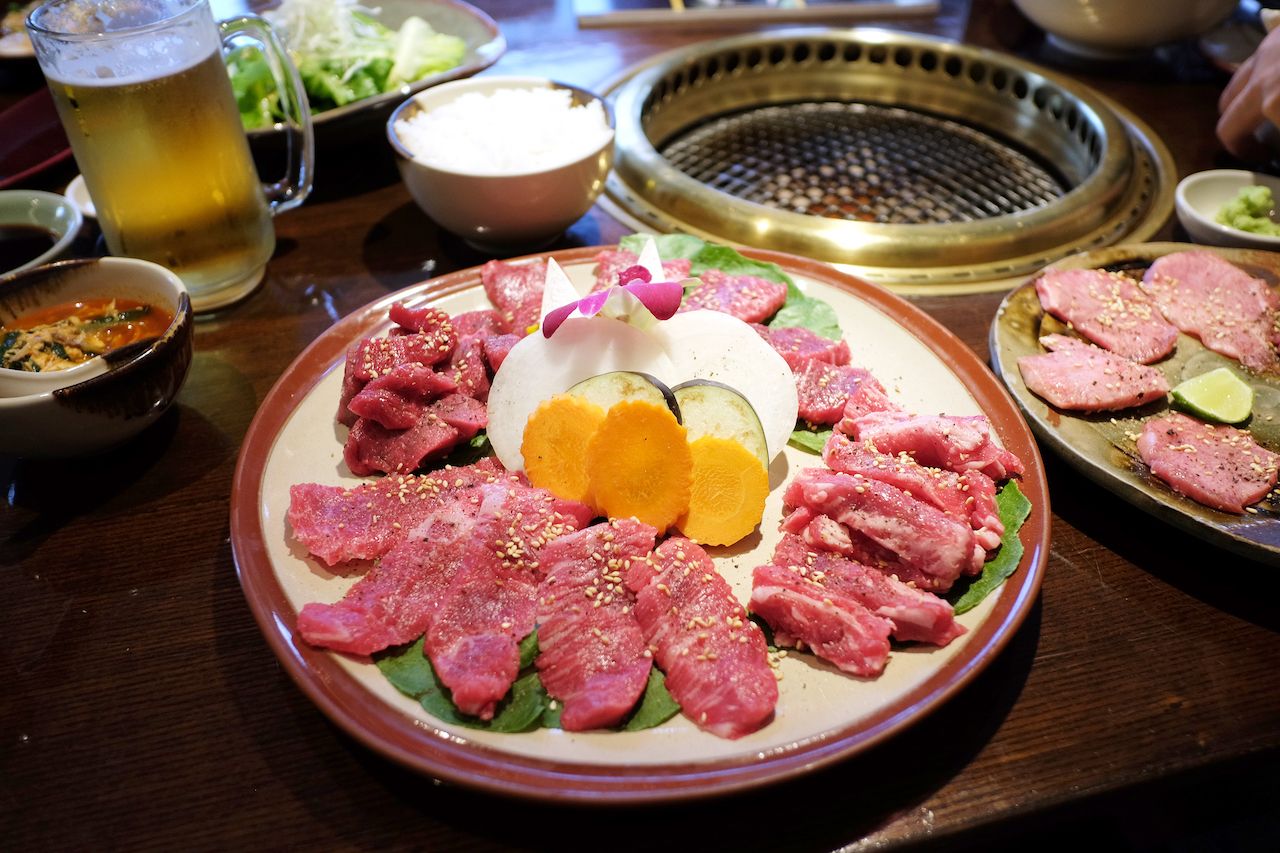 Many yakiniku restaurants offer tabehodai, an all-you-can-eat dinner based on the length of your meal, usually 90 or 120 minutes. You can order as many servings of meat as you want within that time frame. You can also order an à la carte option. Each one comes with a different combination and amount of meat, which you can choose depending on your appetite and budget.

Some restaurants also offer an order by the plate option, which simply allows you to pick a cut of meat and the quantity. You’ll then pay for each individual plate, which might be a better option for people who know exactly what they want to eat.

What is yakiniku barbecue sauce? 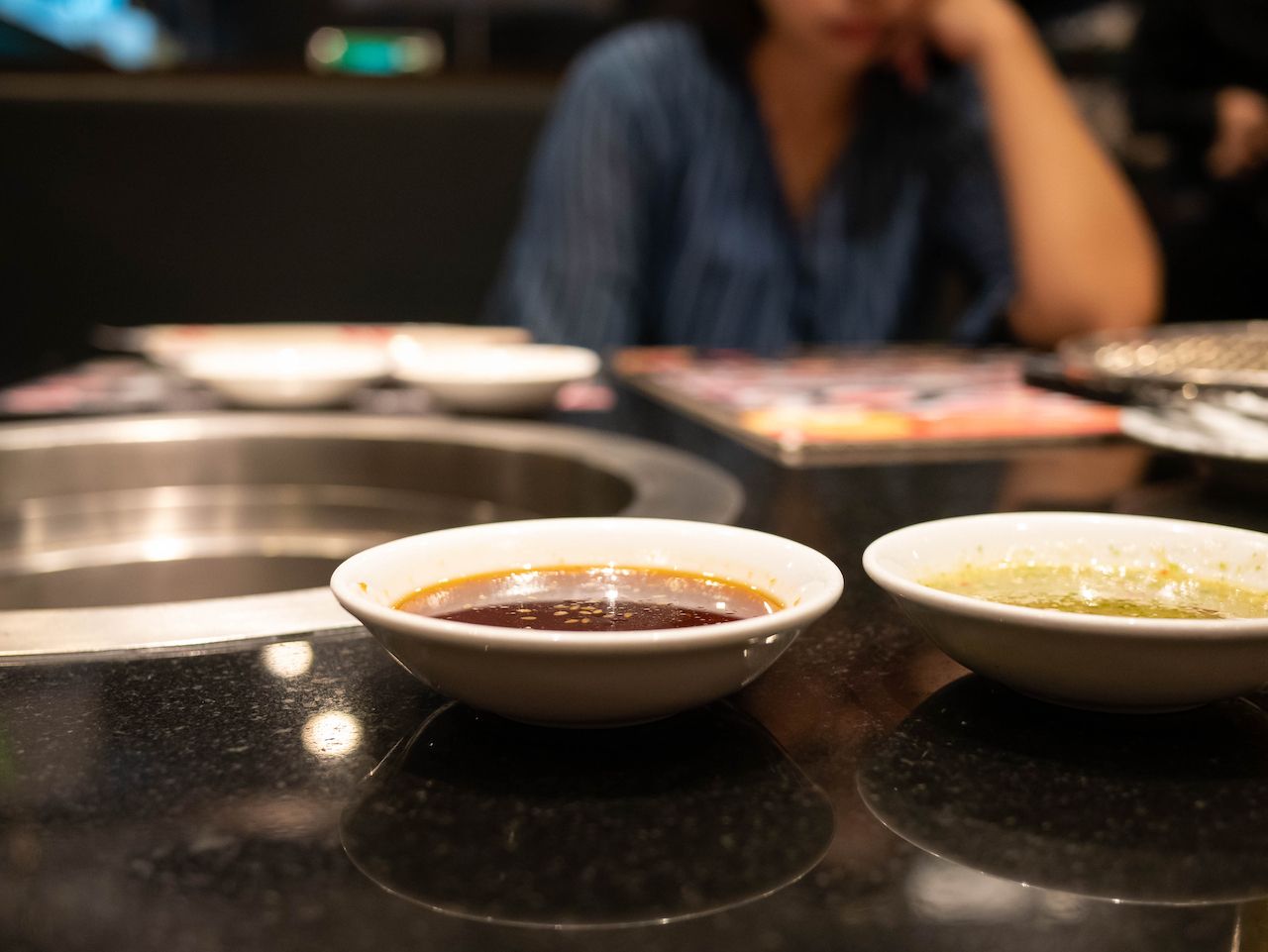 Unlike Korean barbecue, yakiniku is not eaten with ssam (lettuce wraps). Instead, you’ll be provided with a series of barbecue dipping sauces. These sauces are a substitute for marinades. Once the meat is grilled to your specifications, it’s dipped directly in these sauces. The most common among these is sweet tare, a mixture of sugar, sake, garlic, black pepper, and ginger.

However, a litany of sauces beyond tare will likely populate the dinner table, including gochujang, a Korean sweet and spicy hot pepper paste; sesame oil; soy sauce with wasabi; and miso dare, a thick miso paste. Miso is often paired with offal, while tare cuts through the richness of fattier meats.

How to cook and eat yakiniku 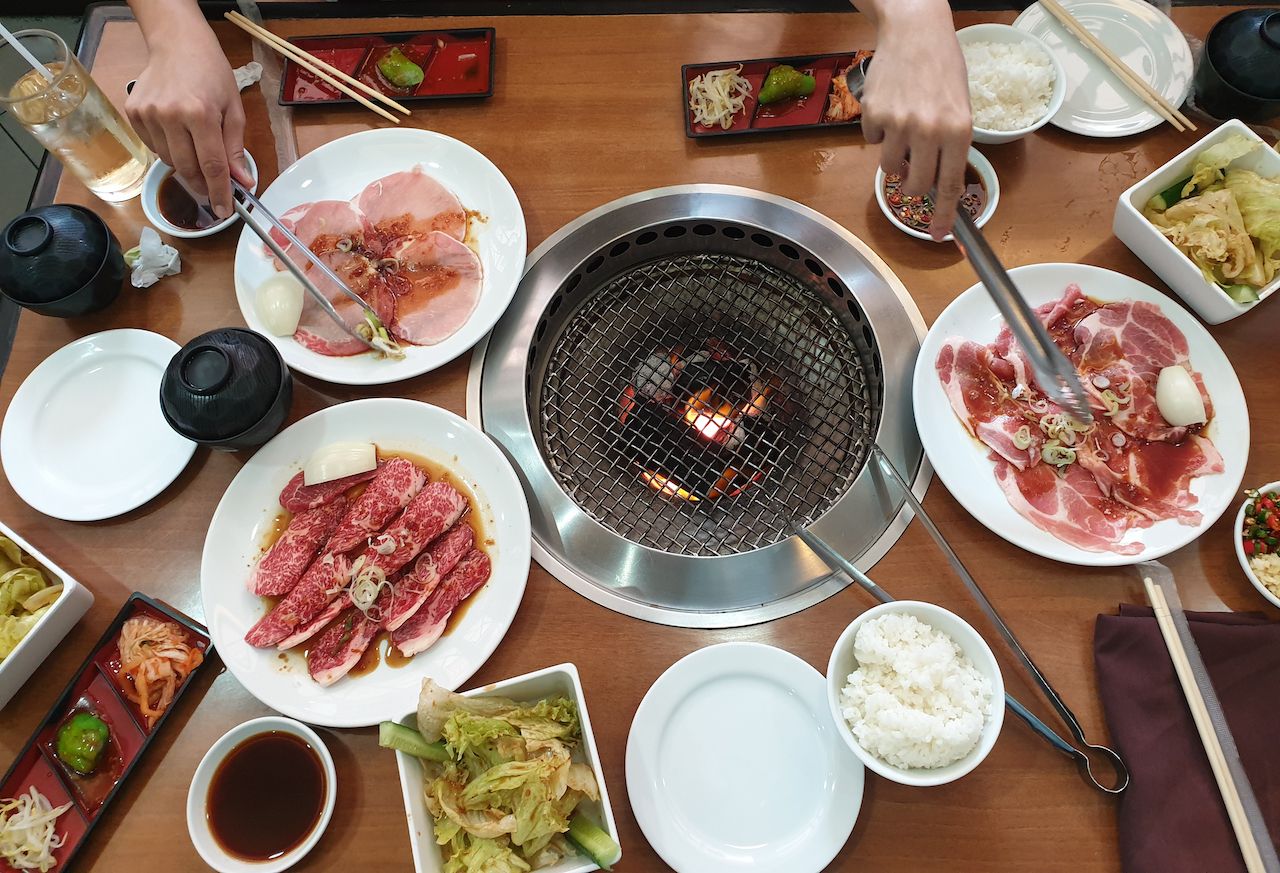 If you plan to order any cuts of meat that have been marinated, grill those last, otherwise the grill will become coated with fat drippings and seasoning that leach onto everything else you grill. If you order vegetables, grill those before the meat.

Cuts of offal aren’t seasoned, so start by grilling that cut first. End with short ribs, which have been marinated beforehand. Beef tongue is often served with a slice of lemon. After it’s done grilling, squeeze on some lemon juice before eating to add a tart kick.

Yakiniku meat is typically thin cut, so you need to be extra careful about keeping an eye on the grill. Some cuts will only take a few seconds to cook. Thin slices of rib and sirloin, for instance, should only be lightly seared. Tenderloin, which is served in slightly thicker slices, needs to cook a little longer on lower heat. Embrace your adventurous side and try more offal, like intestine or tripe. These cuts pair best with miso and sweet barbecue sauce.

Korean barbecue and yakiniku are similar in another crucial way: Both thrive on a celebratory, high-spirited atmosphere. Ravenous carnivores will fit right in at a yakiniku restaurant, but so will anyone who enjoys spending quality time with friends over a leisurely meal.

Spirits + CocktailsYou’re Drinking Sake Wrong. Here’s How They Do It in Japan.
Tagged
Food + Drink Japan
What did you think of this story?
Meh
Good
Awesome