If you want to swim with a fish the size of a bus, Mexico is one of the best places in the world to do it. At the right time of year, you’re almost guaranteed to see whale sharks in the Sea of Cortez (east of the Baja Peninsula) and in the Mexican Caribbean (near Cancún). It is possible to interact with wildlife in ethical ways, but you need to choose your destination and your tour operator carefully.

Whale sharks are giant but gentle

The whale shark is the largest fish in the sea, and you can snorkel alongside them in many places around the world. Whale sharks are usually between 18 and 32 feet long — though one was measured at almost 62 feet — and weigh about 20 tons. They mostly ignore those who swim around them, that is, if you follow the rules in place to protect them.

To swim next to an animal with a mouth that can open as wide as five feet is a thrill. But only plankton, krill, and the tiniest of fishes can pass through their throats, which are smaller than your fist. They have no desire to taste humans; they’re even known to spit out grains of rice and other foods not part of their natural diet. Whale sharks’ gills — which you can watch undulate beautifully as the animal pushes water out through them — are human-sized too, but also pose no risk to swimmers. Humans and their boats are much more dangerous to the endangered sharks than the sharks are to them.

Mexico has strict whale shark rules, and most tour boat operators are careful about following them. Swimming with the immense creatures is a popular tourist activity in Mexico, and it’s in everyone’s interest that the animals keep returning to their feeding grounds.

Tourists’ fascination with interacting with animals in the wild — and the fees they pay to do it — are often essential components of protecting species and the habitats they live in. The communities know it’s more profitable to protect the animals than, for example, eat them or jeopardize their food sources and environment.

Whale sharks are endangered and their population is decreasing, so respecting the rules is extremely important. Mexico’s whale shark tourism is regulated by the Secretaría de Medio Ambiente y Recursos Naturales (SEMARNAT) and the Secretaría de Turismo (SECTUR). Look for SEMARNAT or SECTUR certification when you choose a tour operator, as not all operators are certified.

The rules aim to protect and minimize disruption to the sharks. They limit the number of boats and people that can approach, the size and speed of boats, and the distance you must keep between you and the animal. The rules even restrict tour boats to specific hours so that the whale sharks have daylight hours free from humans. When these rules are respected, the animals don’t seem to notice humans or their boats.

Generally, two people plus a guide are allowed to snorkel with a whale shark at a given time, so you’ll take turns with the other people on your boat. Enter the water slowly and smoothly so as not to scare the marine animal away.

Try not to bring any unwanted chemicals into the sea with you, including sunscreen, moisturizers, hair products, and make-up. Rules around sunscreen are changing — at first biodegradable sunblock was allowed, but no-sunscreen practices are growing. Instead, bring a hat and a cover-up, especially for places where there’s a long boat ride to get to the whale sharks. Mexico also has restrictions on single-use plastics, including plastic bags and water bottles.

One of the main rules when swimming with whale sharks is to stay on the surface of the water. You’re required to wear a life jacket (or a wetsuit without a weight belt) to make it difficult for you to dive under the water. Whale sharks seem to have sensitive bellies and often turn them away from scuba divers’ bubbles and flee from an area where humans are swimming underwater. It’s perhaps because the sharks think the underwater humans are dolphins, which have been spotted ramming the sharks’ bellies. No one knows if the dolphins want the sharks to leave or if they’re just amusing themselves. But it is clear that whale sharks don’t like air bubbles below them and will swim away when they notice them.

Swimmers are asked to stay on the sides of the shark, generally between its eye and the base of its tail. Whale sharks swim at about three miles per hour and humans at about two, so you can keep up with one for a few minutes before it smoothly glides away in search of more plankton.

Keeping your distance from whale sharks helps protect both of you. If the shark is spooked and swims away quickly, its giant tail could accidentally swat you if you’re too close. Unsurprisingly, touching the animals is also not allowed. Know that it could lead to a cut or a skin infection for both the shark and for you.

Photography is fine, but not with a flash. However, it’s tough to get a half-decent photo. The water will be murky — the sharks are there because they’re feeding on all the plankton — so it’s better just to focus on enjoying the experience. If your shark decides to leave, your swim might only last a minute or two. But if you follow the rules, there’s a good chance every person in your boat will have a few turns in the water with them.

Where to swim with whale sharks in Mexico

It’s possible to see a whale shark in any ocean waters surrounding Mexico. But if swimming with them is on your to-do list, there are two main places to go: the Sea of Cortez and the Mexican Caribbean, each with several destinations to choose from.

Whale sharks are seen in Mexico’s Sea of Cortez throughout the year, but the fish are much easier to find between October and February. In the Mexican Caribbean, whale sharks congregate north of Cancún along the Yucatán Peninsula from mid-May to mid-September. 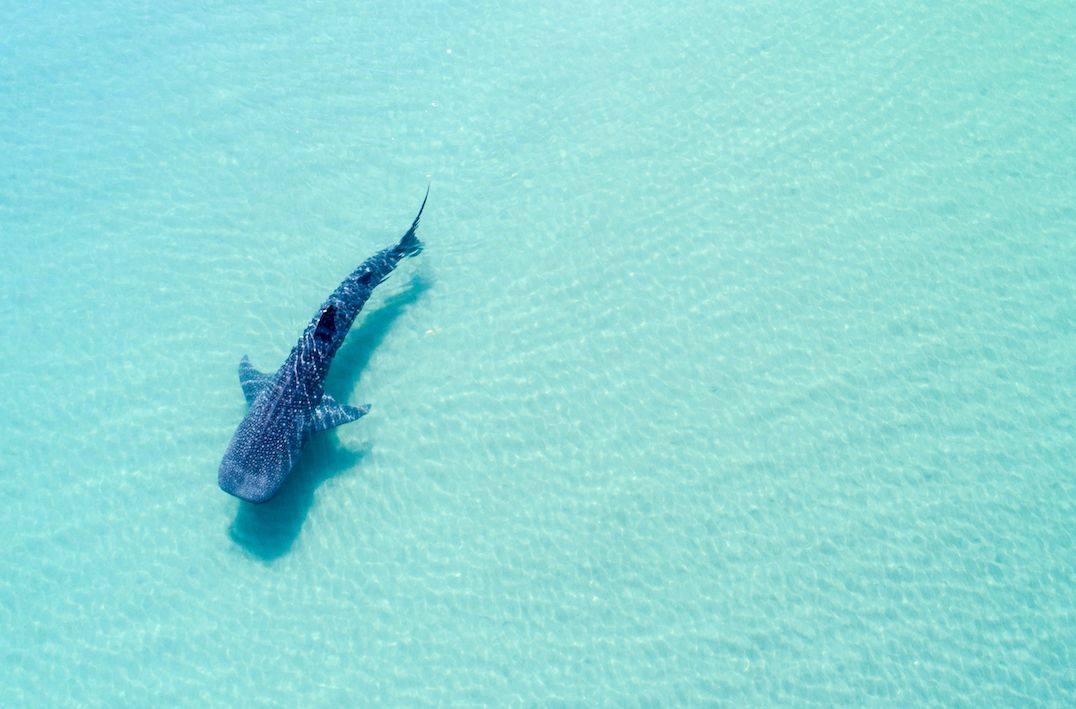 One of the most accessible places to see whale sharks is just a few minutes off the sea wall in La Paz, the laid-back capital of the state of Baja California Sur. It’s a two-hour drive north of Cabo San Lucas and has its own airport.

La Paz Bay is a critical habitat for whale sharks and has been a protected refuge since 2018. Within sight of the city, there are three plankton-rich spots that teenage whale sharks seem to love. There’s even a good chance of spotting a whale shark if you take another water-based excursion, like a swim with the sea lions at Isla Espiritu Santo or boating to the region’s Caribbean-like beaches.

Between October and February, it’s rare not to see whale sharks on a La Paz tour. Another advantage of choosing La Paz for your whale shark experience is how carefully the interactions are monitored in the refuge. Boats have to radio in and out of the whale shark zones and take their turns, so there’s no overcrowding. Only boats with certified operators are allowed to enter the zones, with no private vessels allowed. 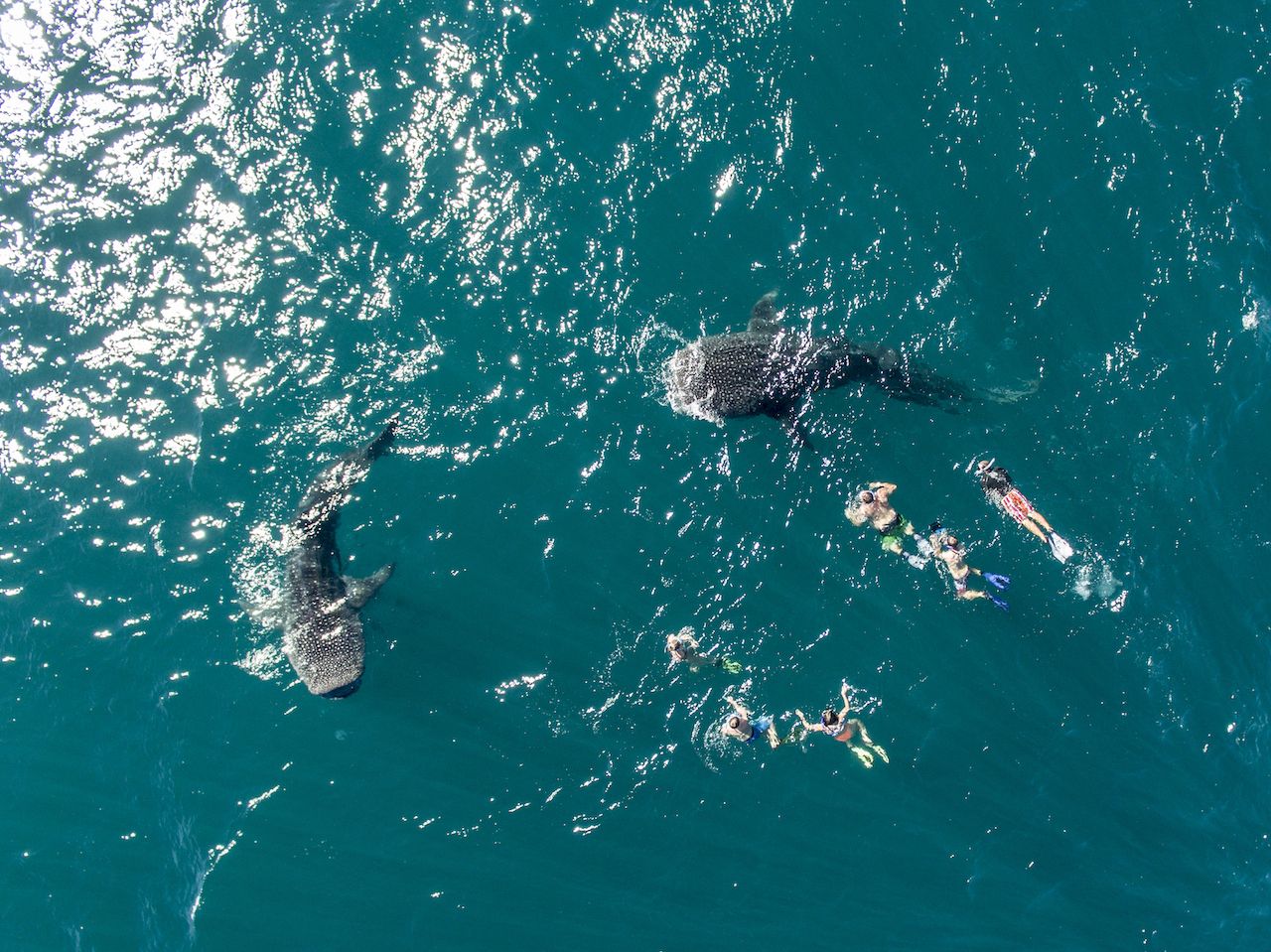 If you’re staying at the tip of the Baja Peninsula, in the Los Cabos area, you don’t need to miss out on swimming with whale sharks. It’s possible to get a whale shark tour to look for the animals in the Cabo San Lucas area. However, most tours will drive you up to La Paz for the day to ensure you get the experience you’re looking for.

Four hours north of La Paz, and even more laid-back, is Loreto. It was the first Spanish settlement on the peninsula, founded in 1697. The waters off Loreto are protected as the Loreto Bay National Marine Park. Even the world’s largest animals like the blue whale seem to love the waters here. While whale shark swimming tours aren’t on offer, you might get lucky and see the sharks while you’re on a whale watching tour.

This marine park is 60 miles northeast of Los Cabos. Unique here is a large coral reef, rare on the western side of North America. There are a few accommodation options in the town of Cabo Pulmo. Water lovers might prefer to book a live-aboard so that they can swim and dive in a different location every morning and afternoon, with multiple opportunities to look for whale sharks.

On Mexico’s eastern coast, whale sharks love the plankton-rich waters of the Mexican Caribbean and are frequently seen here between May and September (though the timing of their arrival and departure varies each year). The legal season for swimming with the sharks is between June 15 and September 15. You’ll have the best chance of seeing whale sharks in the Mexican Caribbean if you visit between mid-June and August.

The whale sharks’ favorite places seem to vary over the years. It’s probably easiest to spot them off Isla Mujeres. You can stay on the island itself — there are about 60 hotels to choose from — to explore everything Isla Mujeres has to offer. For example, North Beach is often named as one of the world’s most beautiful beaches. Most of the whale shark trips that depart from Cozumel, Cancún, Playa del Carmen, and elsewhere along the Riviera Maya go to Isla Mujeres.

Part of the Yum Balam Ecological Reserve, Isla Holbox is a 20-minute ferry ride from the Port of Chiquilá, about a two-hour drive northwest of Cancún. Holbox is a car-free island, with people getting around by golf cart, bicycle, and on foot. There are about 70 different accommodation options on Holbox.

A few whale shark tour operators will take you here from the Cancún area, but staying on Isla Holbox is easier. Plus, whale shark season coincides with the time some of the island’s beaches light up at night with bioluminescence. Isla Holbox also has a large number of beautiful birds to admire, including bright pink flamingos. 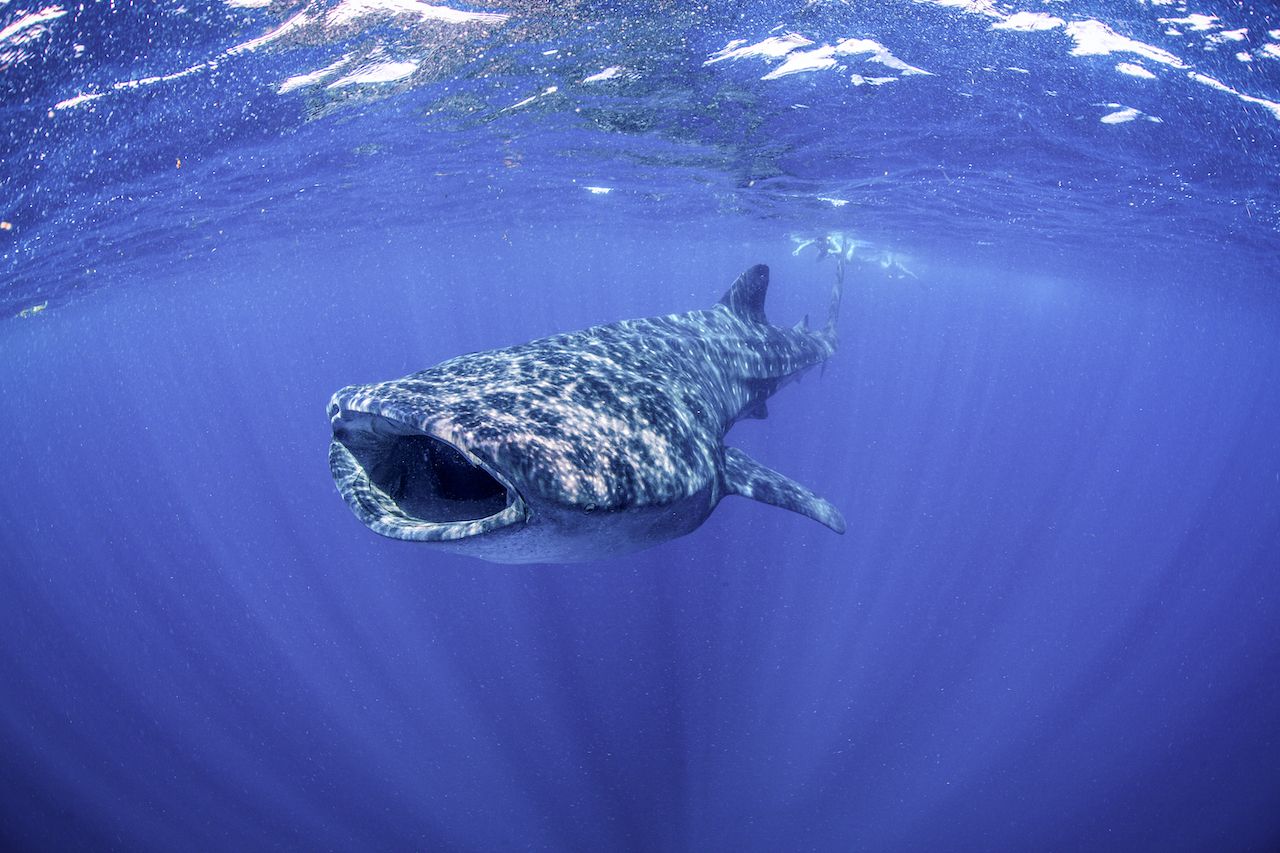 Isla Contoy is an uninhabited island north of Isla Mujeres on the way to Isla Holbox by boat. It’s a prime nesting spot for turtles and birds and more than 200 different bird species have been seen here. You can take a whale shark excursion here from Cancún, and the tours from Isla Holbox may come here if whale sharks aren’t found closer.