“have you ever had anyone freak out underwater when they see the sharks?” I ask Sean-Douglas Brand of Blue Life Divers. “Like, they just panic and totally forget what to do?”

“Actually, no,” he says. “But sometimes you look at their masks and you can see their eyes just bugging out.”

Brand is a divemaster with Blue Life Divers, based in Playa del Carmen, just south of Cancún, Mexico. The company runs an extensive list of dive-related activities, from reef and cenote dives for certified divers to classes and snorkel trips for non-certified divers. But between mid-November and mid-March, a huge number of their dives are dedicated to scuba diving with sharks: getting divers in the water with bull sharks, one of the most aggressive shark species in the world. Oh, and sometimes they’re feeding, too. 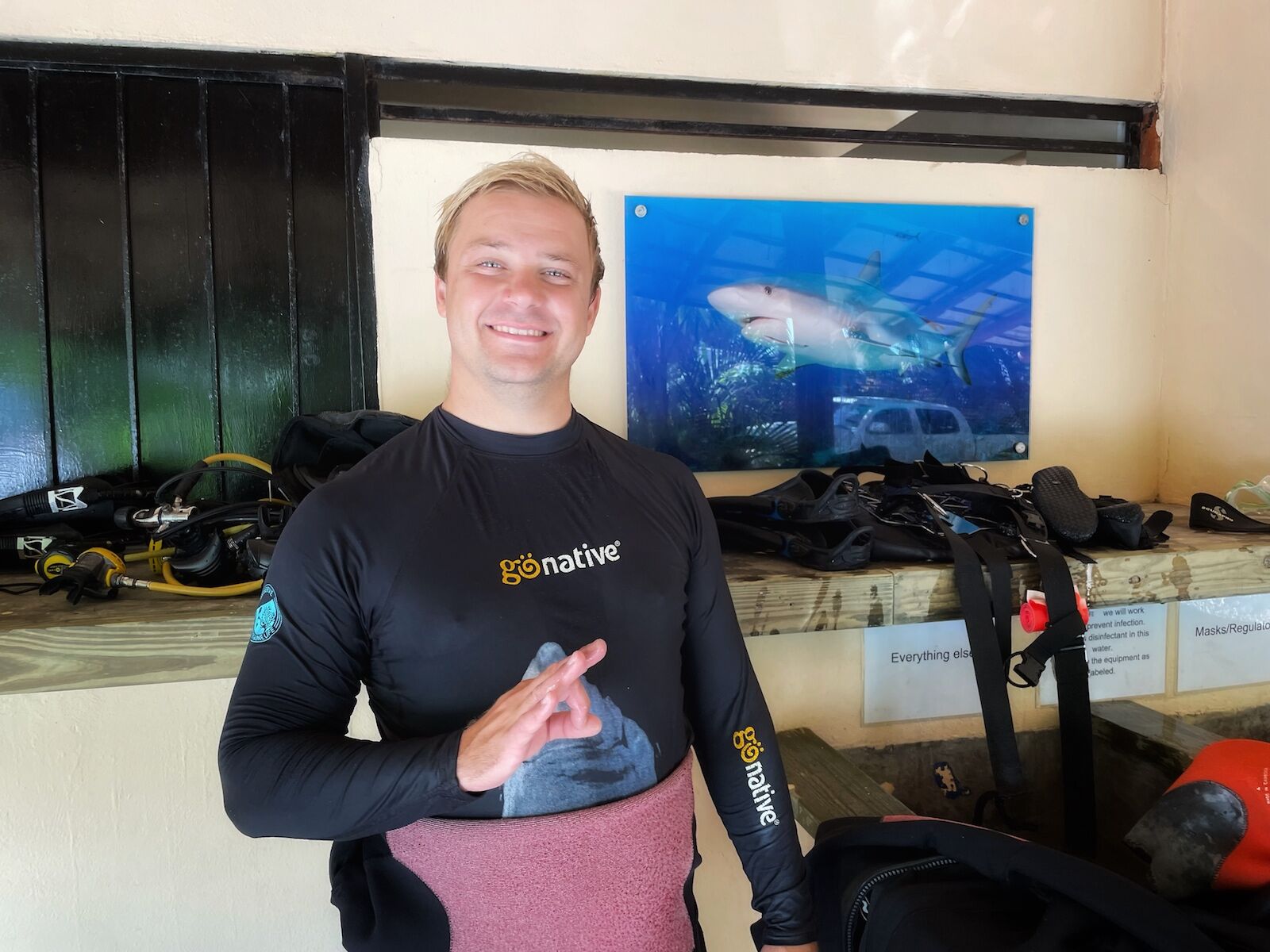 Brand has been leading bull shark diving tours since 2018 and estimates he gets in the water with them roughly four times a week during the bull shark season. While he’s a highly certified diver, the reason he was selected to dive with sharks was a bit more of a matter of convenience. “The owners said to me ‘you’re from South Africa, so you’re fine with sharks, right?'” says Brand.

Nearly every dive shop in Playa del Carmen offers bull shark diving, which means dozens of divemasters in the city are regularly in the water with the sharks on a weekly basis. And Brand knows the sharks well. While it appears to me that we’re seeing ten or more sharks during our dive, Brand tells me at the surface that it was only four. He recognizes the sharks by their markings and fins and can tell from their size when they’re going to give birth. Most of the sharks here are pregnant and come to feed in the warm water before heading south to give birth in the mangrove forests near the border with Belize.

Brand says he’s never been afraid of getting in the water with sharks, even when they’re feeding. (Blue Life runs observation dives, rather than feeding dives, which means they don’t offer chum or bait to bring the sharks closer to divers). Despite that, we’re in the water for less than 10 minutes when he gives our small group the hand signal to get very close to the sand — a bull shark is coming closer than expected to our group of four divers, and we want to make sure she doesn’t try to swim directly beneath us. According to Brand, “it’s just a safety standard. We let them pass above us. They’re peaceful, but it’s still nature out there, and if you bother them, they will react.”

Despite close encounters, Brand says he loves being in the water. “Sharks, in general are really misunderstood. They really are gentle and graceful animals, and just being able to observe them always makes me appreciate them.”

How to get over a fear of scuba diving with sharks 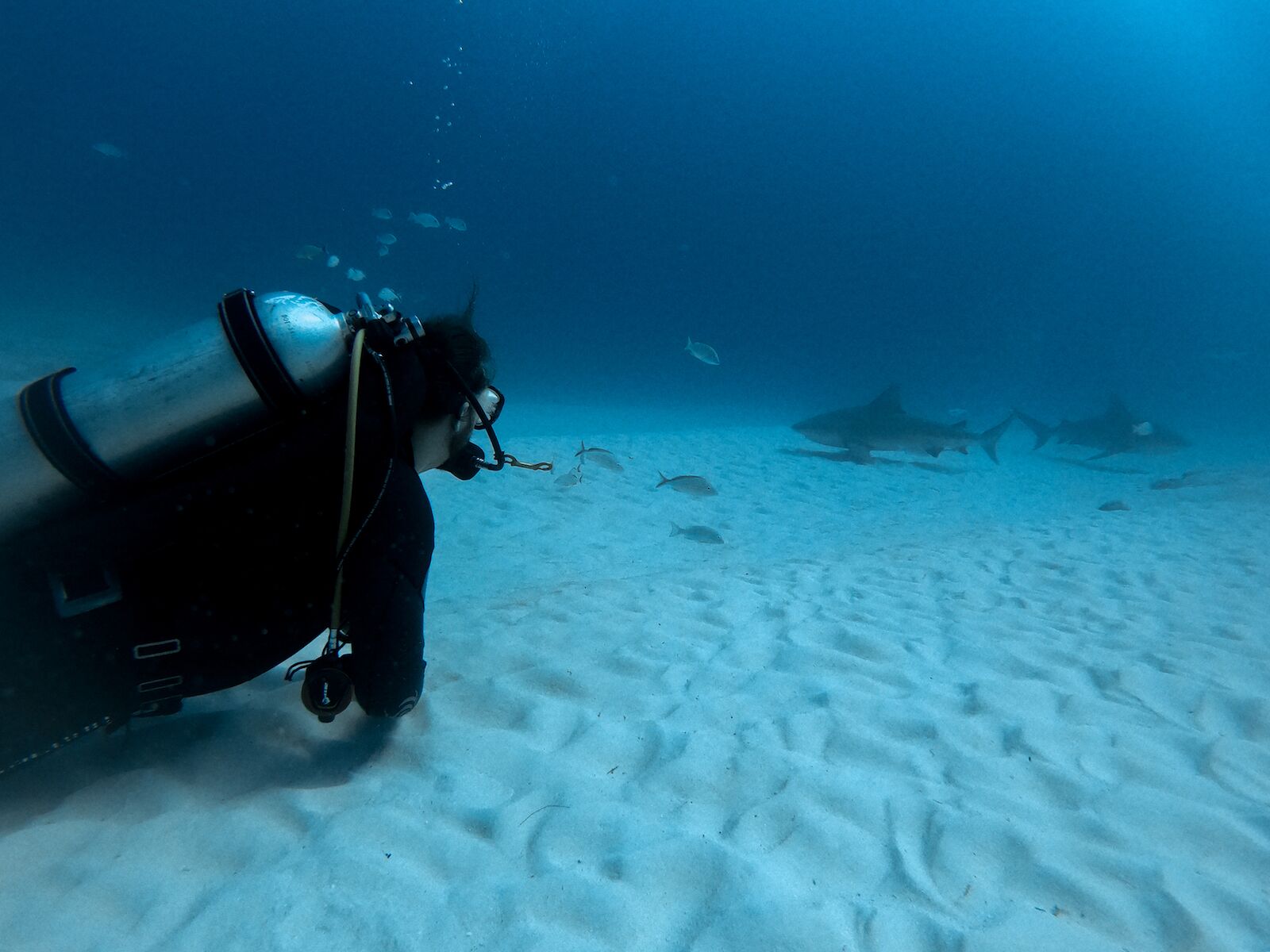 Bull sharks aren’t particularly small, nor are they particularly docile. They’re considered one of the world’s most dangerous shark species, partially because they can live in both fresh and saltwater and get up to 11 feet and 500 pounds in size. That said, unprovoked shark attacks are rarer at between 50 and 80 a year — but around 450 people die per year from falling out of bed. And of those 50 to 80 attacks, the vast majority are non-fatal. In fact, only three species have been linked to repeat deaths: great whites, tiger sharks, and — wait for it — bull sharks.

The Blue Life team and the lawmakers in Playa del Carmen are well-aware of the stats. The government and non-profit partners who manage the marine park set requirements for diver safety: divers can’t wear any flashy jewelry, full-body wetsuits are required, and bright colors are a no-go. While the small purple stripe on my personal wetsuit passes muster, a fellow diver’s orange fins get swapped for solid black.

With these precautions, there’s never been an attack while shark diving in Playa del Carmen. That may still be the case even without precautions, as only four percent of shark bites worldwide are on scuba divers. By a massive margin, humans at the surface are attacked far more often, especially as the silhouette of a human on a surfboard looks a lot like a fat seal to a shark looking up from below. 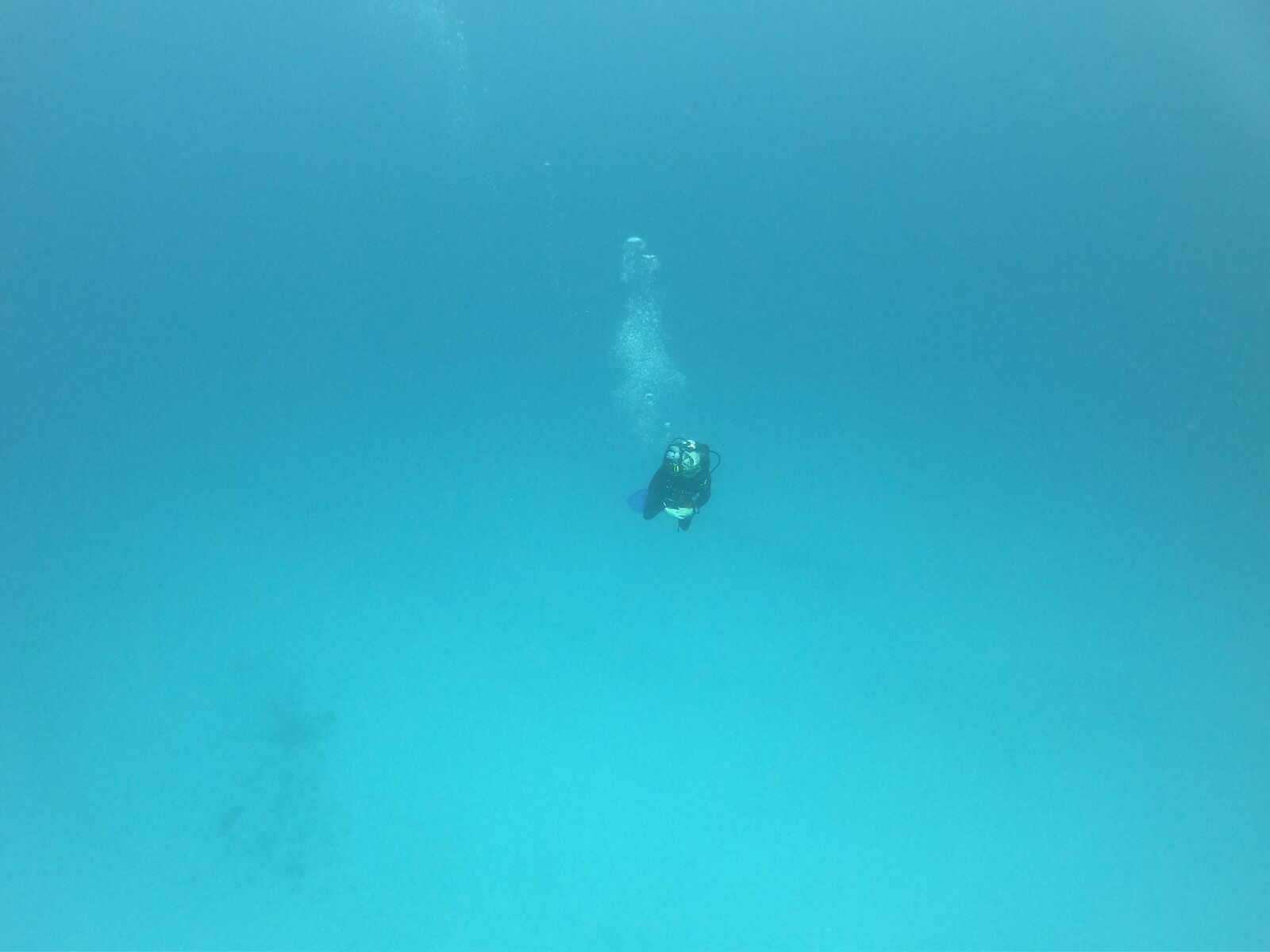 But for most people, logic and statistics won’t do much to quash their fears — but getting in the water probably will. You’ll need a certain amount of bravery to sign up and back roll off the boat, but once the dive starts, it’s surprisingly peaceful. While non-divers may envision murky water with sharks coming seemingly out of nowhere, it’s really the opposite. Average water visibility is 70 feet or more. So unlike being on the surface, you can see everything going on underwater in every direction.

When diving, you’ll see sharks coming from far away, and with multiple divers in the water at once, the odds of an approaching shark going unnoticed are almost zero. Fear is common, says Brand, who experienced it himself. “Before my very first bull shark dive, I was quite nervous because I didn’t know what to expect,” he says. “But as soon as I was down there, I felt really relaxed and loved it so much.”

Offering an additional level of peace of mind is that divers spend most of their time shark diving lying on the ocean floor at around 80 feet deep. It feels somewhat protected and more like watching a shark theater than being surrounded by sharks.

Of course, the show isn’t that exciting, at least from a danger standpoint. The sharks see divers every day of the season and appear more interested in keeping an eye on the nearby fish than us. It’s not the same as a chance encounter with a shark in the open ocean. These sharks know the nearby humans will leave them alone and return the favor. And with fins on, an adult scuba diver can be eight or nine feet long and far too large for a pregnant shark to bother tangoing with. After scuba diving for so many years, being underwater feels much safer than being at the surface. I’m used to seeing everything going on around me in all directions. It’s a luxury not afforded to paddlers, surfers, and swimmers.

Is scuba diving with sharks ethical? 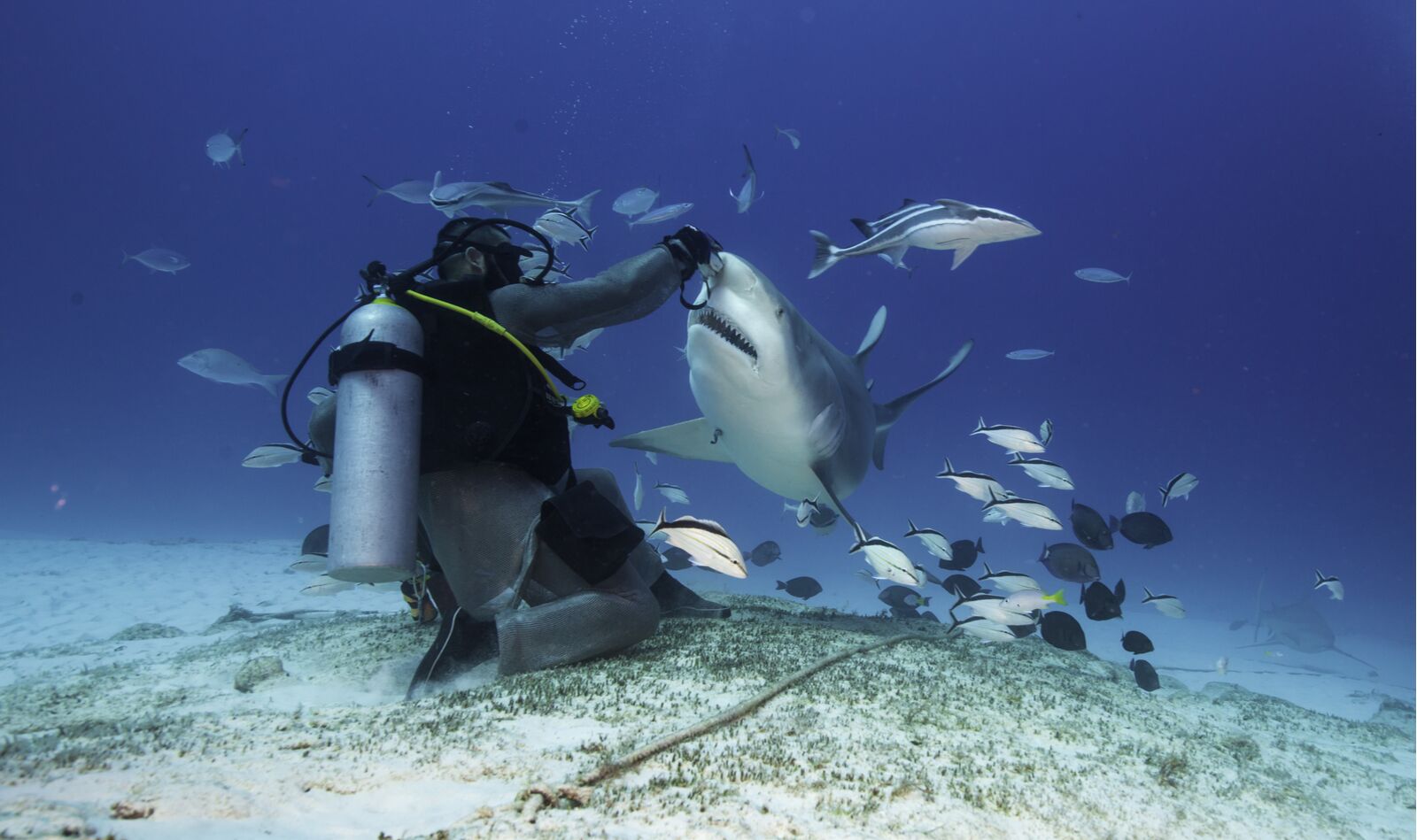 The ethics of scuba diving with sharks are a personal decision to make and one that I struggle with as a travel writer and scuba diver. Generally speaking, chumming or feeding wild animals is a bad decision. It impacts their natural behaviors and makes them more reliant on humans (and more prone to associating humans with food). For that reason, I chose an operator that doesn’t feed sharks. But we still benefited from the feeding, at least to some degree, since getting fed is the primary reason sharks congregate in the protected area just a few hundred yards offshore.

In a perfect world, everyone would understand the environmental value of protecting the sharks — not because humans get anything from it, but because sharks part of the food chain and are essential to ocean health. But in practice, the sharks here are only protected from fishing and boating because diving with them is more lucrative than fishing. If the sharks stop coming, the tourists stop coming, and it becomes harder and harder to keep the area protected against commercial fishing interests.

Another argument for scuba diving with sharks is that being close to the animals helps people learn not to fear them, resulting in better policies and more concern for their welfare. The area where we were diving in Playa del Carmen recently became a national reserve, which ensures the wildlife and reefs stay healthy — and it’s all because of the sharks.

Epic StaysThis Underwater Villa in the Maldives Lets You Sleep With Sharks
Tagged
Diving Outdoor Sustainability Wildlife
What did you think of this story?
Meh
Good
Awesome