Austin doesn’t feel, look, or act like a massive city. You may actually be surprised when you arrive to see just how small and compact the city core is. Though once you begin to move about downtown, you’ll realize that Austin has some sprawl to it. There’s no better way to efficiently travel the downtown corridors — and to the hotels, bars, breweries, and restaurants scattered among them — than by renting a bike and trekking around Austin’s wonderful and eclectic neighborhoods.

Pick up your ride 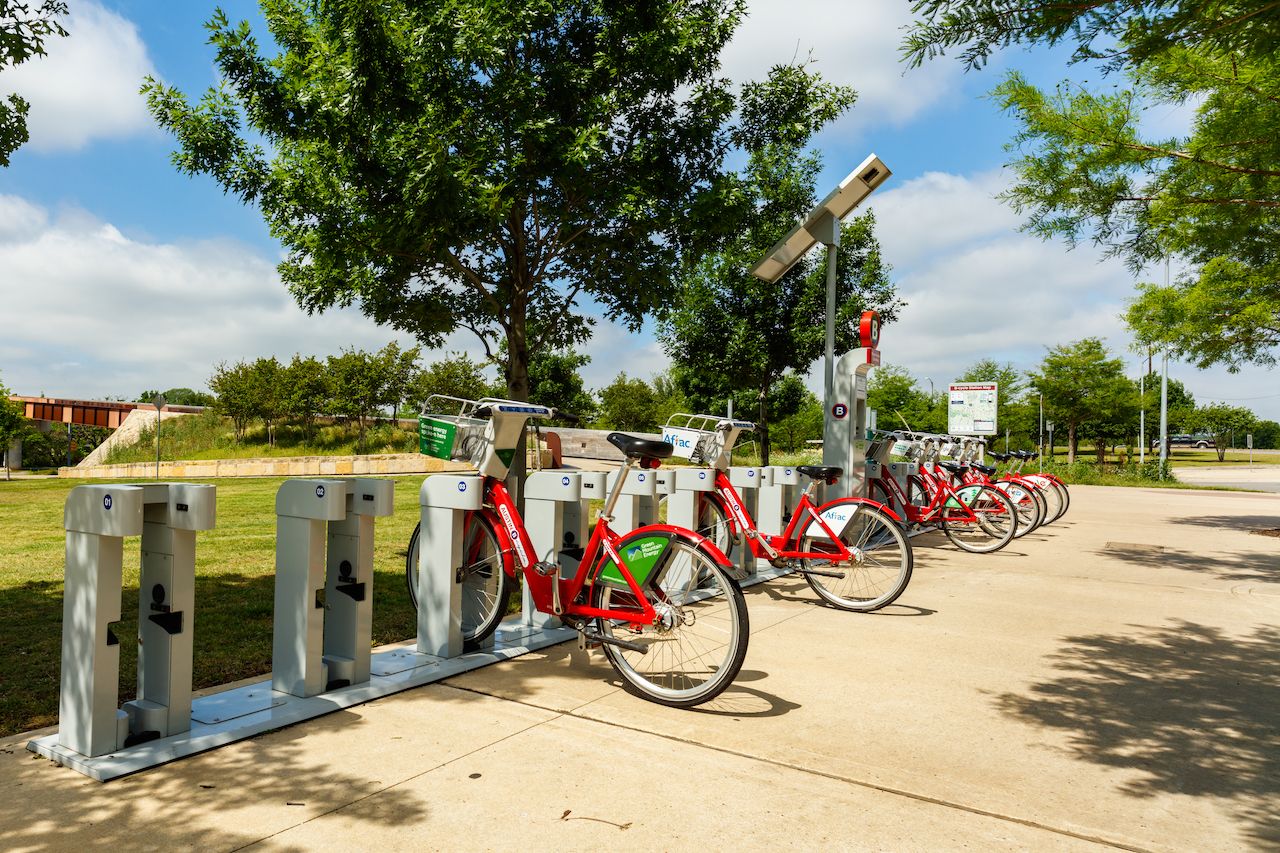 Austin is loaded with all kinds of goodness, so let’s cut through some of that chaos and streamline your trip with some suggestions from a local Austinite. A bike tour in many cities is a point A to point B to point C affair, but this is Austin, not Dallas or Houston. Here, it’s quite easy to eat, drink, and sightsee all in the same area, so lose the rigidity and instead be open to quick pull-offs and random encounters. As such, I’ve routed this for you by activity and location rather than a complete point-to-point itinerary, because you never know when the tempting beats of a rooftop jam session or a dip in “The River” are going to beckon you off your hog. I certainly wouldn’t want you to miss out on either.

Before you begin a self-powered tour around Austin, you need to rent a bike. No matter where you’re staying around town, there will be a bike rental place near you. If you’re staying near the urban core on Congress Avenue and you’re north of the river, head into Austin Bike Tours and Rentals to grab a set of wheels. These folks are also the best spot for guided tours, if you aren’t much for routing your way around an unknown city by yourself.

Around South Lamar and the surrounding restaurant district, swing by Bicycle Sport Shop. Or, for those of you who can’t be bothered to swing by a shop, Austin provides a municipal bike rental service with pick-up and drop-off points scattered all over the city. You’ll have to pay per use, but this can be the best option for a night out on the town or an impromptu pedal along the river. Most bike rentals will offer tour packages when you rent and these will be more capable of showing you around the city. 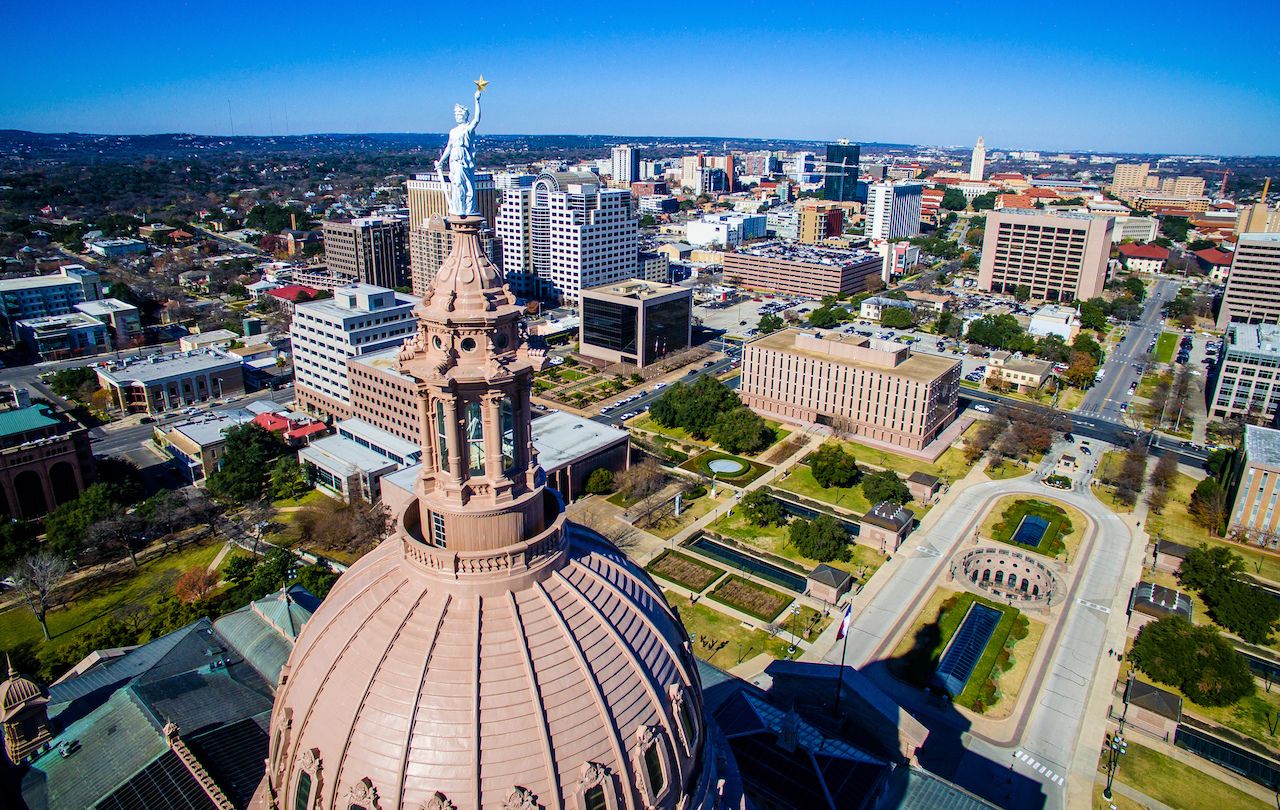 Austin is primarily known for two types of cuisine: Tex-Mex and BBQ. Both of these must be on your list, and if you’re here for longer than a day or two, should be routine parts of your visit. That said, given the global music scene, the University of Texas, and the fact that Austin is the state capital, the city also has excellent food across a variety of cuisines.

Around the city center, north of the River and near Congress Avenue, La Condesa is an ideal stop for quintessential, though slightly upscale, Mexican food. It’s easily accessible from downtown, Clarksville, and East Austin, and is a solid example of where a pair of locals might head for a casual first or second date, not least because the cocktails command as much attention as the food. In the same area, Moonshine Grill is the spot for classic Southern fixings; think chicken fried steak and blackened catfish. Or scoot over to Italic for Italian food and pizza. For something unique — more akin to a picnic, actually — head down to the Fareground food hall and grab a bite and a brew under the shade of a tall oak tree. If you’re looking for beer downtown, ask for local brews at any bar you walk into and there will be plenty of options.

To access downtown from the east, bike down Fourth Street north of Cesar Chavez Boulevard. From South Austin, head across the First Street Bridge or Congress Avenue. While in the area, spend some time walking the grounds and interior of the Texas State Capitol, enjoy the history of Texas (and maybe an IMAX movie) at the Bullock Texas State History Museum, or fill up your Instagram by exploring many of the fantastic iconic murals scattered around the city. If you want to really tack on some miles, enjoy the beautiful lakeside scenery and ride the Ann and Roy Butler Hike and Bike Trail for views up and down Town Lake (what locals call the river). The trail runs along the Colorado River south of downtown. 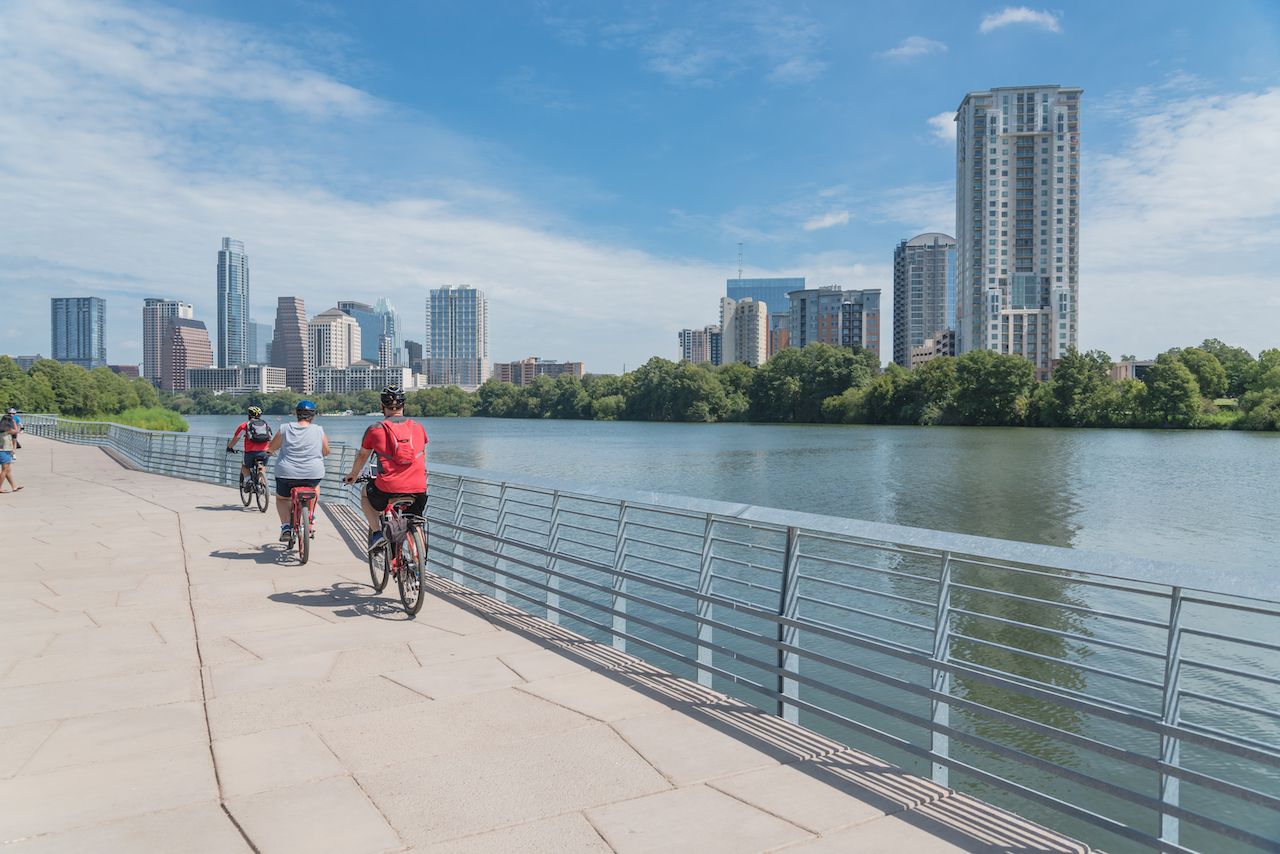 Moving over to East Austin provides your tour a wholly different look and feel than the downtown center. The neighborhood is home to the Pfluger Pedestrian and Bicycle Bridge over Lady Bird Lake, which you must ride across to say you’ve biked Austin. This neighborhood is in the middle of a transformation, which over the past few years has brought a variety of restaurants, coffee shops, and food trucks to East Austin. With that evolution has come a hefty dose of culinary fusion, which in Austin generally means smoking something or wrapping it in a homemade tortilla.

Nasha India is the quintessential example. Here you can have both curry queso and jalapeno naan. When the itch for BBQ hits, skip the long line at Franklin’s and head over to la Barbecue or Kerlin BBQ for an equally awesome selection of smoked meats with local Austin flavor. For something totally different, stop by Kebabalicious to enjoy some delicious Turkish-style street food.

Biking through this neighborhood around East Cesar Chavez Boulevard. leads you past food truck parks and pubs where you can grab a Lone Star or craft brew. It’s very bikeable, especially if you move onto one of the neighborhood streets off the main thoroughfare. East Austin is also the city’s brew hub, with local favorites including Lazarus Brewing, Zilker Brewing Company, and Hops & Grain Brewing all within a few minutes of each other and near both Cesar Chavez Boulevard. to the south and Seventh Street to the north. Shop along South Congress Avenue, pedal over to the Congress Avenue Bridge at sunset to watch the bats fly out, or cruise up and down Sixth Street for some live music. 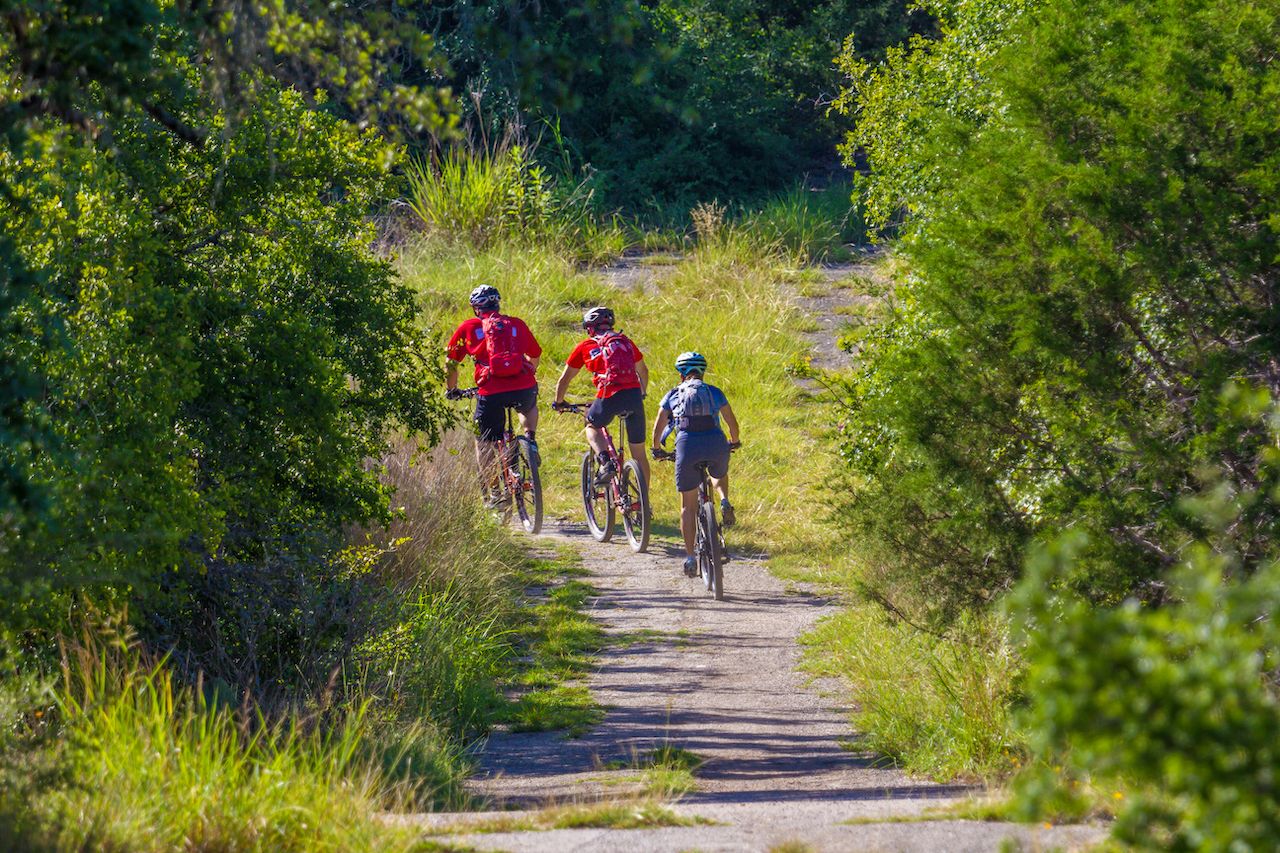 South Austin, across the river from downtown and East Austin, immediately offers a wide variety of selections just over Town Lake. This area is ideal for a mellow cruise because the easiest ride leads you to the most selections for food, drink, and sightseeing. Cross the river on Congress Avenue and immediately turn right onto Barton Springs Road. Travel Barton as far east as you’d like until one of the following options calls to you: Aussies for bar food and sand volleyball; Terry Black’s BBQ, which is the best place in town to get caught up in “smell porn,” as the place is always smokey; or Shady Grove. Longtime Austin favorite Chuy’s Tex-Mex makes homemade flour tortillas in house and serves the best margaritas in Austin.

While in the area, cool off with some stand-up paddleboarding on Town Lake. You can rent a board from SUP ATX. Or, more simply, jump into Barton Springs or Deep Eddy Pool for a dip at Zilker Metropolitan Park. For a mid-pedal rest, find some shade at Zilker Park to people watch and, if dogs are your thing, make new four-legged friends.