“There are times when it’s actually easier to die than to keep going,” says explorer Mario Rigby, reflecting on his solo, two-plus year walk across the continent of Africa.

Rigby — who was born in the Turks and Caicos, ran track in Germany as a teenager, and now resides in Canada — began his journey in Cape Town, South Africa, traveling through Mozambique, Malawi, Tanzania, Kenya, Sudan, and Ethiopia on the way to his final destination of Cairo, Egypt. He walked nearly the whole way but spent two months kayaking his way across Lake Malawi. Many challenges arose along the way.

Relying on maps, for example, that don’t tell you a river has run dry can mean you will run out of water before you expect to. But, says Rigby, he always found the drive to push forward. It’s a drive he says he believes “separates certain people, people who will be survivors and people who will be victims.” 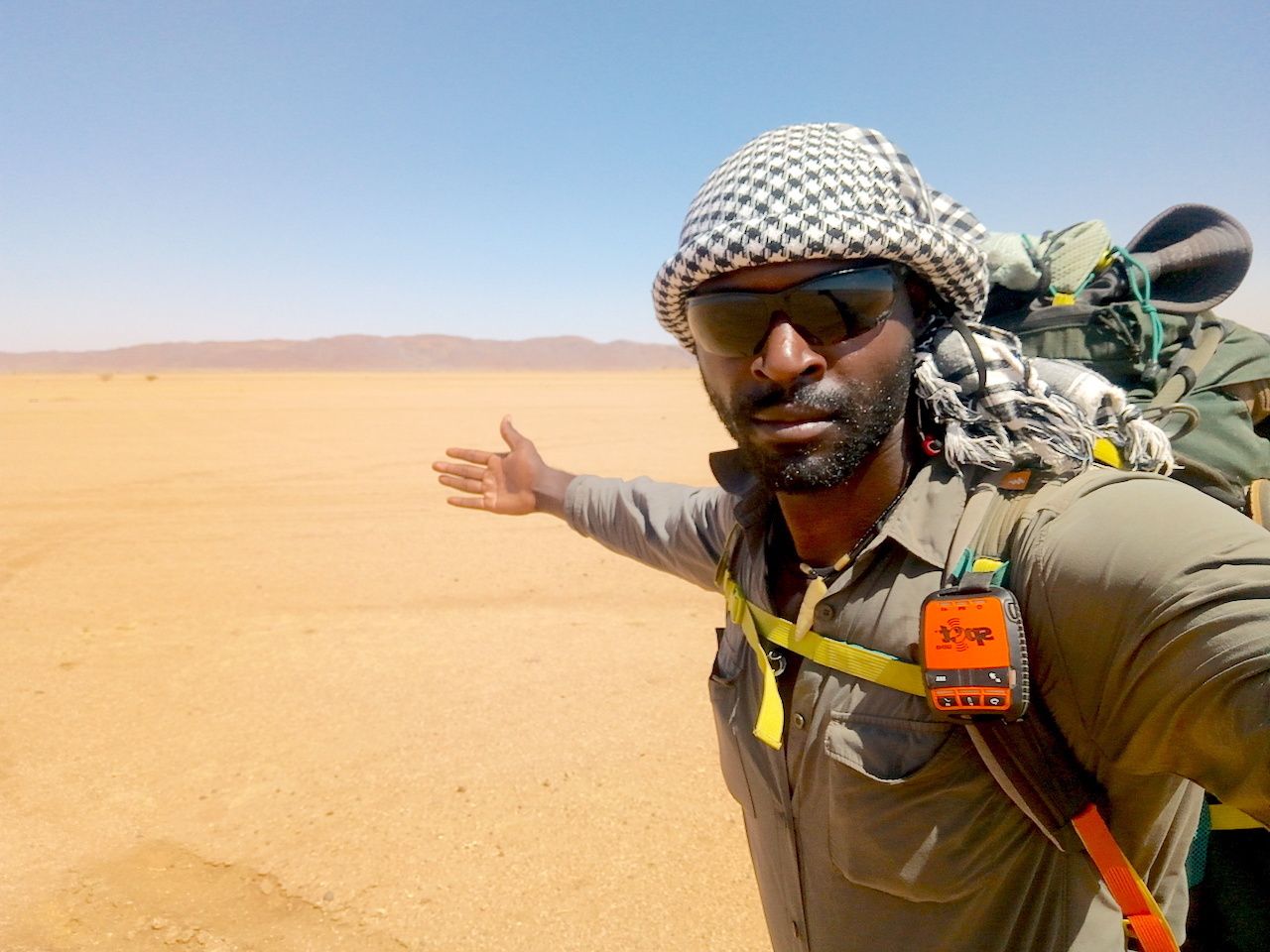 “When you’re out on the lake, in the middle of the lake, and your kayak is sinking, and you’re like, ‘Oh my God, I have five kilometers left to go,’ and you’re dead tired after 15 hours of kayaking, it’s easier to just sink,” says Rigby in a conversation with Matador. He adds, “Same thing with walking across deserts. It’s nice to just sleep and then you know you’re not going to wake up again.”

Rigby could well have been a victim on his journey. Although he chose the western route of Africa, a shorter journey than the eastern route and one where he’d face far fewer conflict zones, Rigby still was arrested several times, twice bitten by a snake, and caught malaria. He had AK47s pointed at him by guards in Ethiopia who mistook him for a rebel fighter.

Although the former personal trainer, who says he was unfulfilled with the money race of Toronto city life, had plenty of opportunities to die in Africa, Rigby says, “The people, the African people themselves, were the ones who saved me.”

Rigby contrasts that to the prevalent Western view of Africa, which tends to be one of pity. “A lot of the times the narrative is we go out and save Africa, whatever that means. But what happened actually is it was the opposite.” 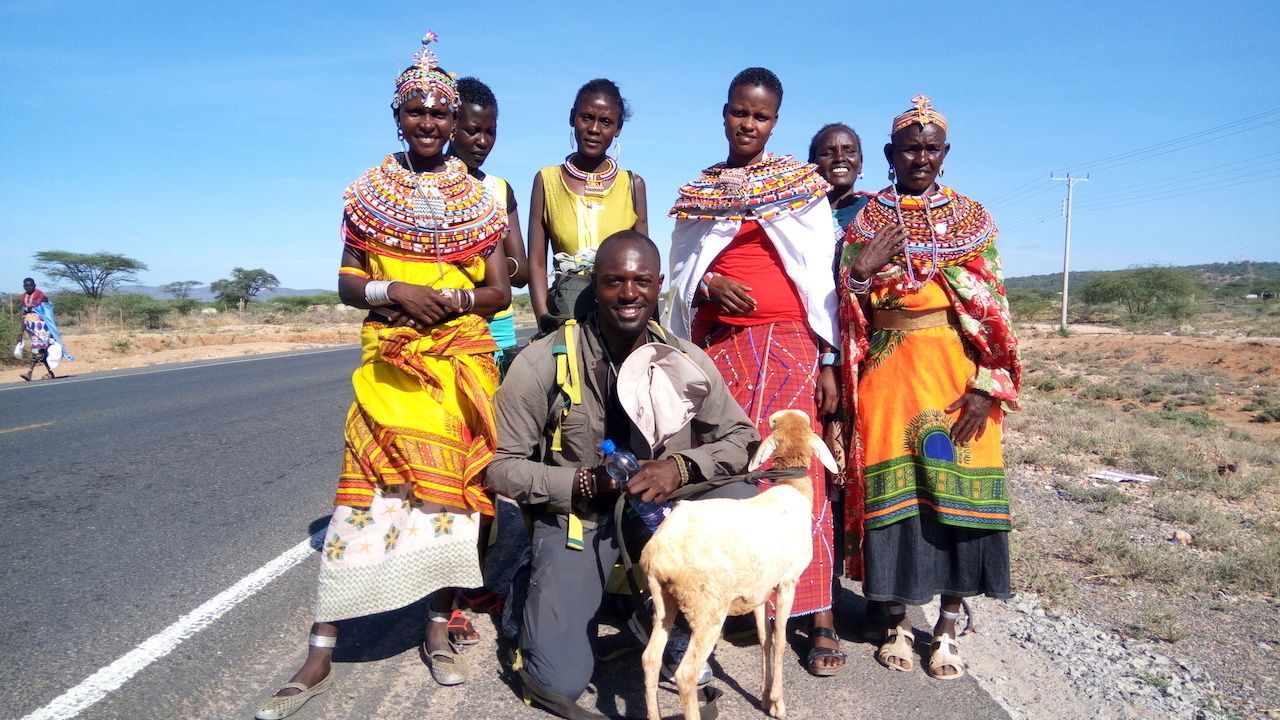 Beyond testing himself physically and psychologically, seeing that side of Africa that “people haven’t really seen” was another motivation for Rigby to undertake the journey. “African people themselves are quite innovative, unique, special. I feel like that has not been represented in the media as well,” says Rigby.

Rigby was also touched by the warmth and generosity of the people he met. Unlike in Toronto, where Rigby says even he found himself not taking the time to connect with people, he says that in Africa, everyone he met was ready to slow down and be present with him.

“I was encouraged to stay in people’s homes who only had a single thing of rice left, and they still fed that to me,” says Rigby. “Obviously I felt really bad,” he adds. In telling their stories, perhaps he can repay the favor.

Stories he may tell are of dancing in colorful festivals, perusing markets teeming with fruits and vegetables, exploring Nubian pyramids, walking with the Maasai between Tanzania and Kenya, or watching traditional wrestling in Khartoum. Rigby has several videos of his journey available on his website, but he’s also working on a longer Crossing Africa documentary. One of the most compelling stories he’s likely to share will be about his time in Sudan. 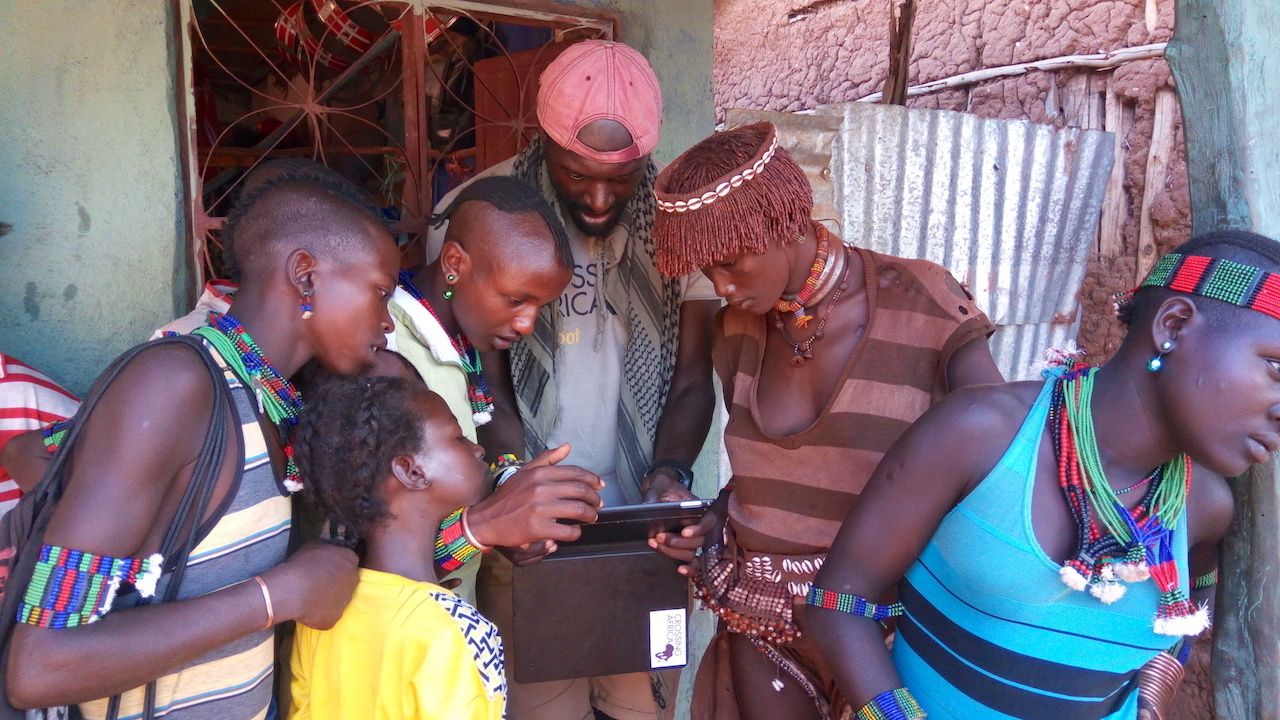 In Sudan, says Rigby, “You’re thinking Shariah law, and it’s going to be extremely strict and everyone’s going to tell you not to do this and not to do that.” While Rigby acknowledges that it was indeed strict, particularly for women, whose movements were more limited, he also says the Sudanese “were actually the most hospitable people I’ve ever met.”

“The country that I thought would be the worst country was actually the nicest country. I learned so much from these people,” says Rigby. “When I was in Sudan, that’s when I really learned about humanity, particularly, and how people treat themselves within a certain society.”

While finding Sudan unexpectedly moving, Rigby found other places surprisingly challenging. He began in Cape Town, on South Africa’s southwest corner, and walked eastward along the southern edge of the country before turning north and walking the coast well into Mozambique before turning inwards. The coastal walk wasn’t as lovely as it sounds.

“I call it the ‘beach trap,’” says Rigby. “You’re on the beach, and a lot of people think, ‘Oh this is a nice little vacation.’ It is not. I have pictures of my feet … look[ing] like grated cheese. There’s massive holes in them.” 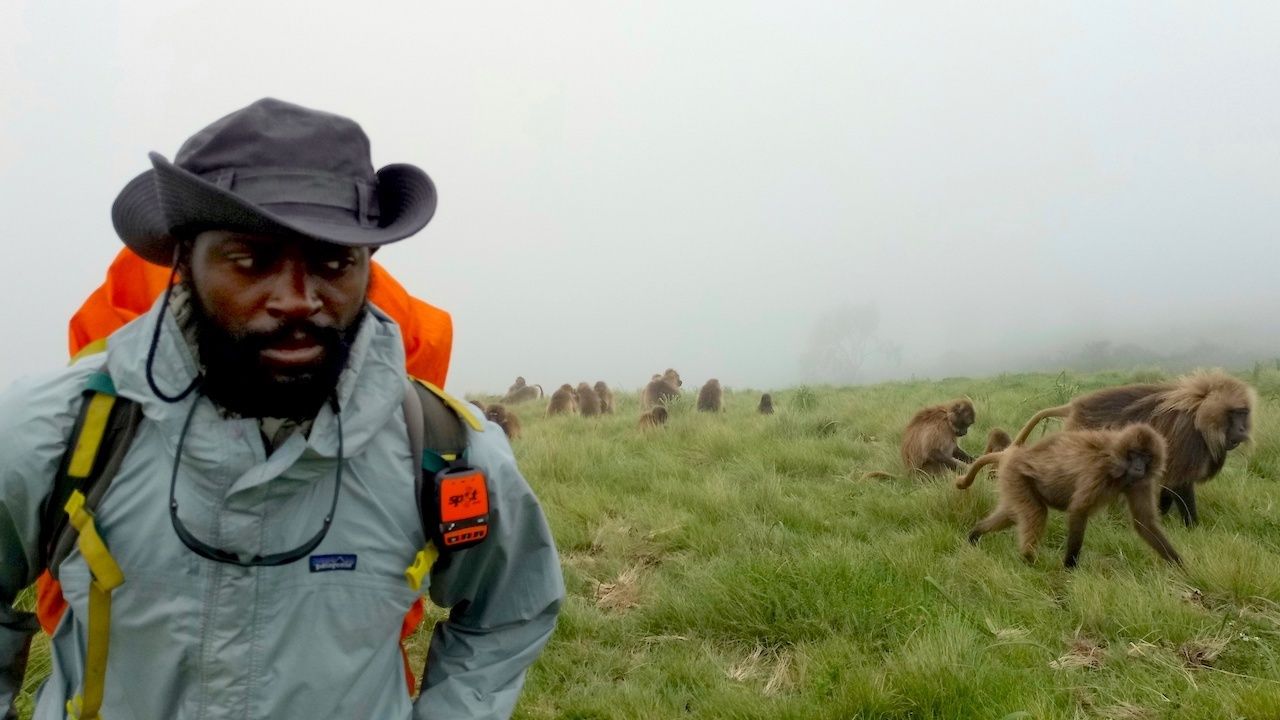 Rigby did survive, and the experience taught him that “anything is possible with research and understanding. You just have to have a logical approach to an impossible situation, and eventually, the outcome will come out as possible.”

Since returning from Africa in 2018, Rigby has translated that message into school talks where he seeks to inspire youth to understand that they can overcome personal obstacles of their own. “These kids, they message me still on Instagram and stuff like that,” he says. “They’re like, hey man, you know, you really inspired me.”

Rigby has since completed other challenges, like cycling across Canada, but he continues to be inspired by Africa. Upon his return from Africa, he was chosen by a UN committee as one of the year’s 200 Most Influential People of African Descent and encouraged to think about more work in the region. 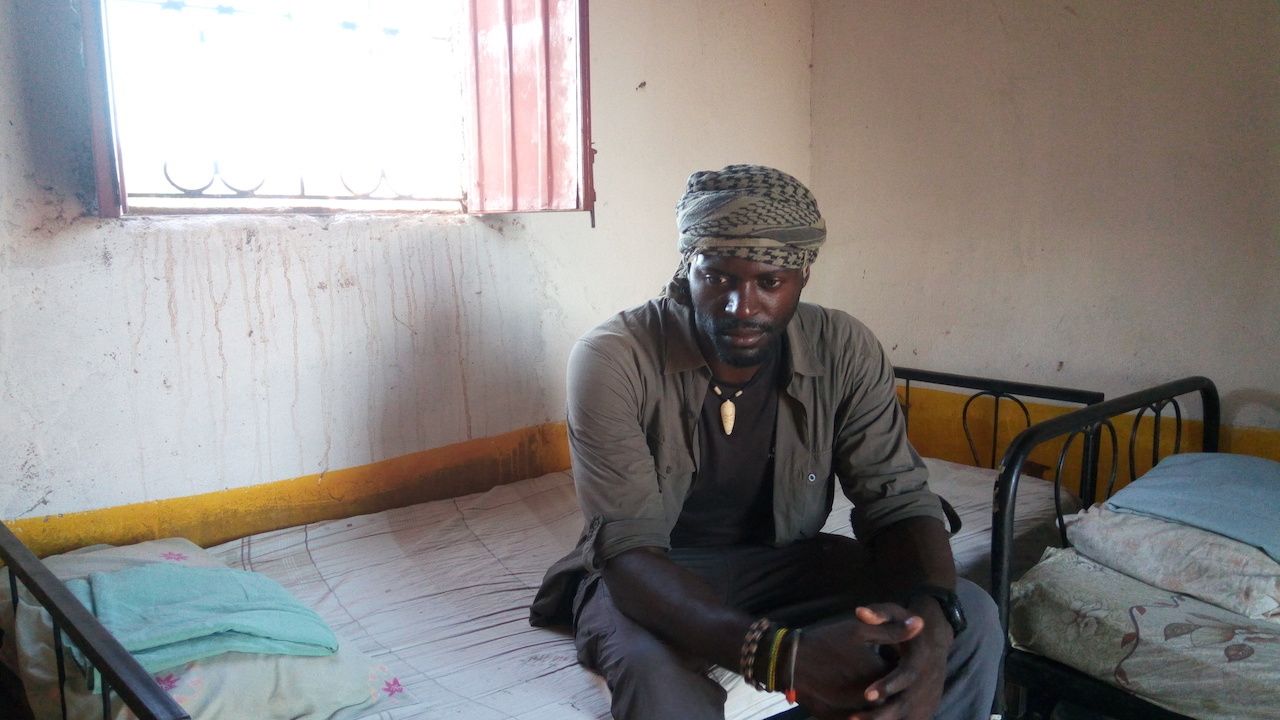 A future project Rigby is exploring is creating a documentary about the West African slave trade, which will have him tracing his own DNA to discover the African country, or countries, of his origin; traveling to major slave importing countries including not just the US and Caribbean countries but also Brazil; and traveling in a kayak across the Atlantic, to simulate the time and challenges of the journey.

Rigby says the kids he has met in the Caribbean and North America rarely want to confront their dark slave history. “The problem is that, particularly in America and the Caribbean, is that Black people do not want to tie themselves to slave history … You know I always ask the children, ‘Hey do you know what your roots are?’ And none of them say Africa. Except for maybe one person out of a hundred kids.”

“Nobody would ever say Africa, and they use Africa as a derogatory term, and that’s because of the history, the stigma that’s behind it. Because nobody has really talked about Africa in a way that it deserves to be told about. It is the cradle of mankind really. We all come from there,” says Rigby.

Rigby, for one, is ready to talk about Africa. And he has a lot of good things to say.

Female TravelThese 13 Women Are Shattering Stereotypes of Africa One Photo at a Time
Tagged
Black Travel Outdoor Solo Travel
What did you think of this story?
Meh
Good
Awesome