The southeastern corner of Turkey is a twisty coastline that looks like gnarled branches reaching into the Mediterranean — a collection of forested peninsulas, rocky inlets, and hidden coves. Dozens of islands lie just offshore, among them tiny, uninhabited islets claimed by Turkey. Most of the larger, populated isles, even those merely two miles from the Turkish mainland, belong to Greece. It’s a stunning corner of the world that begs to be discovered, and the best way to do so is on a week-long boat trip.

Situated at the crossroads between Europe and the fertile lands of Anatolia, Turkey’s Asian side, this region was once vitally important to the seafarers of the early Greek, Roman, and Byzantine empires. Nowadays, though, the fortified castles that once protected against invaders in coastal cities like Bodrum are now museums. The watery havens that long ago held trading vessels and warships are today picturesque marinas.

Travelers depart from these marinas to swim in quiet bays of clear azure water surrounded by wooded hillsides of pine and cypress; to smell the wild herbs growing in natural reserves where brown and black goats maneuver impossibly steep inclines; to marvel at stone cliffs that soar hundreds of feet up from the sea. By night, they’ll anchor near picturesque resort towns with seaside restaurants and late-night markets.

Options for booking a boat trip 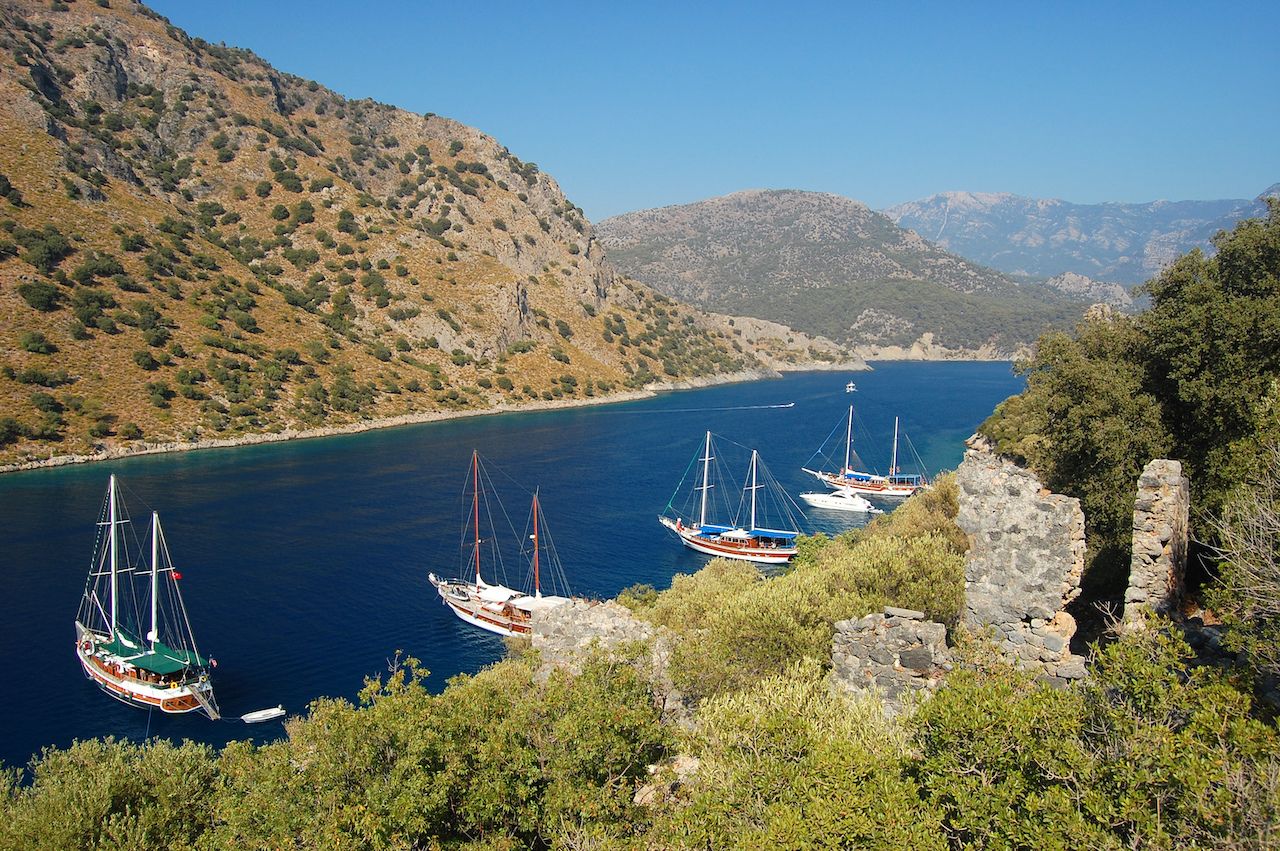 The most popular way to explore the Turkish coastline is on a gulet, a motorized sailboat that will likely seldom go under sail. If you opt for a private boat, Durukos Yachting is a family-owned business based in Bodrum that charters boats and crews. A boat with four cabins may come with a crew of three or four: the captain, the first mate, the galley chef, and perhaps another crew member.

Getting a private boat is not cheap, and is the kind of thing you might do for a special occasion like a major birthday. Or, if your boat has four en suite cabins — not including the area for the crew — you could get four couples in on it together for a blow-out vacation. Gulets come in different sizes and configurations, making some better suited to your group than others. If you do go the private route, you should book well in advance, as by May there may no boats left for an August excursion.

A cheaper alternative to private gulets is booking as part of a tour with a set itinerary. Some of these options are not for families, but rather for adults aged 18 to 39, who are read to spend a week relaxing, bonding, and partying with their new-found friends. Companies like TourRadar book with local operators for as low as $600 for the week, with most meals included. MedSailors operates actual sailboats that take longer to get places, but that means you’ll spend less time motoring. You can book solo, as a couple, or gather a big group of eight to 12 friends. Prices vary by vessel and by summer month; you could pay as little as $700 per person in late May and quite a bit more in August.

When you research options, check whether meals are included — although fortunately food is relatively inexpensive in Turkey. If you do go private, you can state your food preferences ahead of time. Depending on where you anchor, an entrepreneurial local may also pull up in a small motorboat selling fresh village breads baked in their home. Some boats serve nearly all meals onboard, but two per day might be better so you can visit restaurants at your ports of call.

No matter which option you choose, try to get Turkish-style breakfasts onboard since they really are the best breakfasts in the world. And nothing beats waking up, jumping into the sea, and then sitting down to an array of breads, eggs, cress, tomatoes, diverse cheeses and jams, tahini, olives, and fruit spread out on the table. 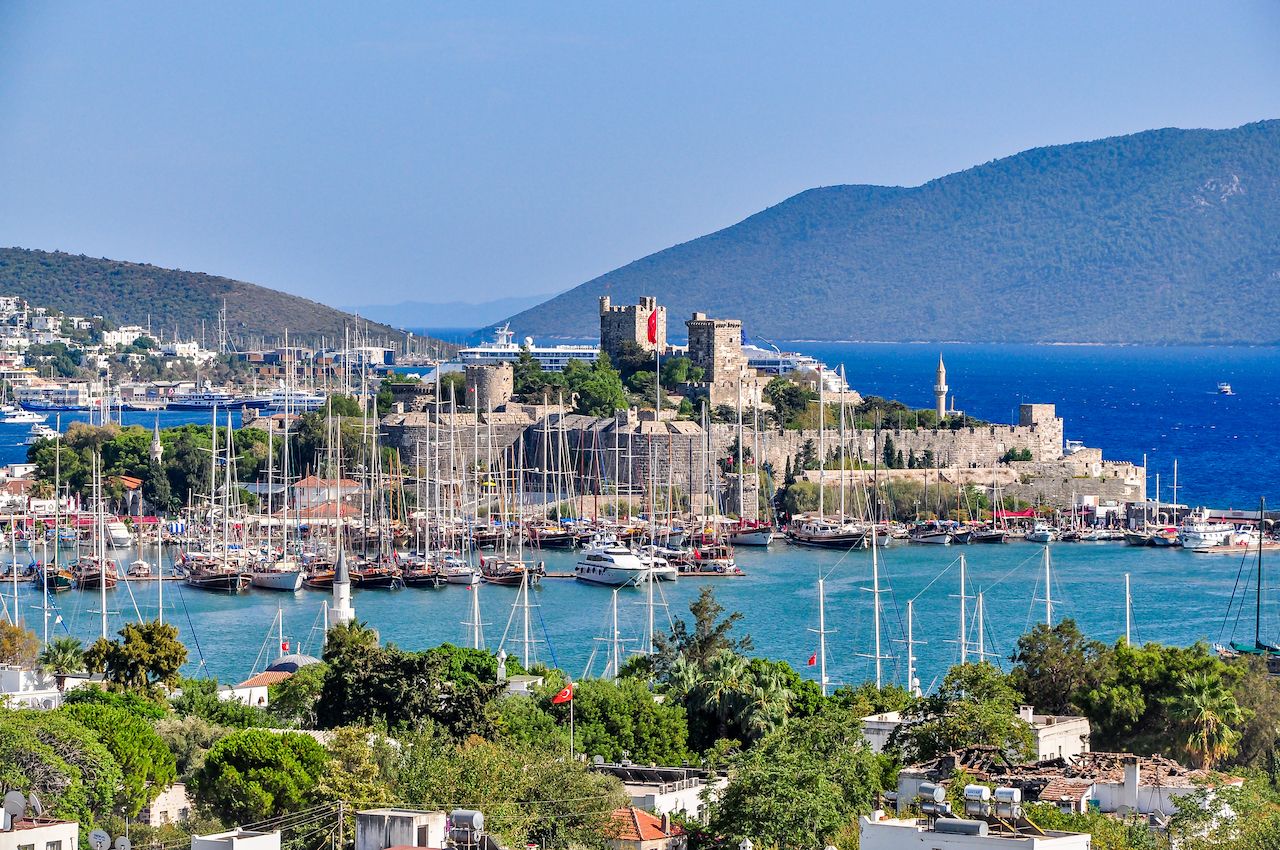 Bodrum, a one-hour flight from Istanbul, is the most popular departure point, and a typical schedule will have you leave Bodrum on Saturday afternoon, returning on Saturday morning a week later. (MedSailors, however, sails off from Göcek, a much smaller marina in a lovely area due south of Bodrum.) While Bodrum can be hot and crowded in the summer, its castle is worth a visit — not least for its view out over the bay.

Although the castle was built in the 1400s during the Ottoman Empire, the museum within it has artifacts from several nearby shipwrecks as far back as 2,500 years ago. You’ll see hundreds of amphorae, or conical ceramic jugs, that once transported wine, olive oil, Roman coins that lay unused on the seafloor, and even age-old swords. You’ll sense the deep history of trading, invasion, and conquest that preceded the holiday vibe of today. 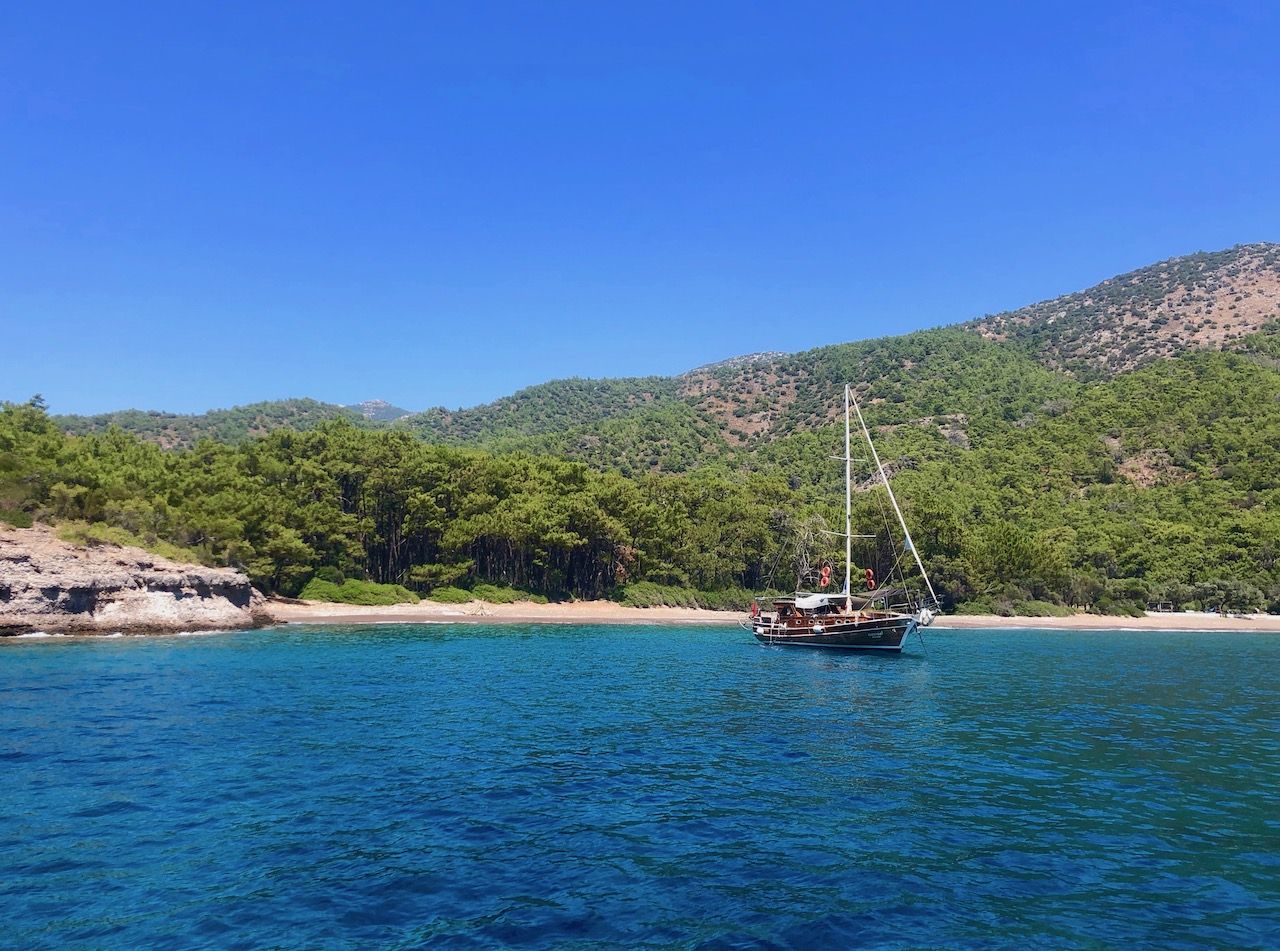 Where you go depends on the itinerary you’ve booked, but in any case be prepared for small changes if winds come up. Your captain may opt to spend less time on the open water between destinations or may anchor at a more protected cove for the night. Regardless of where you head, you’re likely to wake up in a quiet cove that feels a world away from the bustle of Bodrum.

Package tours like those booked through TourRadar stay on the southern end of the Bodrum Peninsula, while MedSailors sails by the Fethiye Peninsula. Should you explore the Datça Peninsula, which lies between those two regions, you’ll visit Turkish resort areas where you’ll hear little or no English. A portion of the Datça Peninsula is a protected reserve, and you may find yourself in a quiet bay surrounded by hillsides where wild herbs grow and agile goats nibble on tasty shrubs. 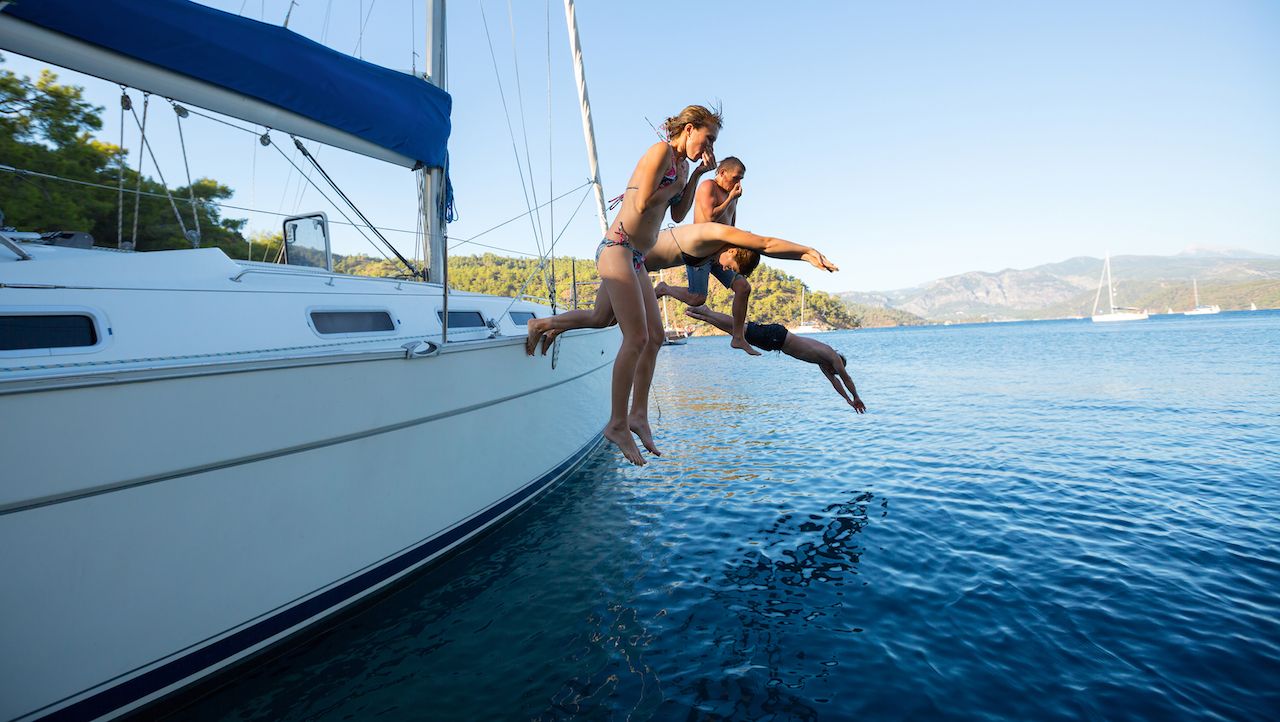 Bring good books and portable games that won’t blow away in the breeze, like Liar’s Dice. No matter where you cruise, spending a lot of time in the water will be part of the itinerary. You’ll be jumping off the boat aplenty, and possibly swimming to sea caves, where the sunlight filters through to make a brilliant aquamarine hue. If you bring reef booties, you could try to find cliff sides to scamper up and then jump off. (Ask your captain first whether it’s deep enough!)

Check before you travel whether your gulet has water toys like stand-up paddle boards. If you have the luxury of a private gulet, you could ask them to supply gear like windsurf boards and water skis at no additional charge. You could swim every day before breakfast, and find running routes in some towns like Bozburun, where you can head up into the hills and look down at the town of Selimiye.

Evenings on the Datça Peninsula 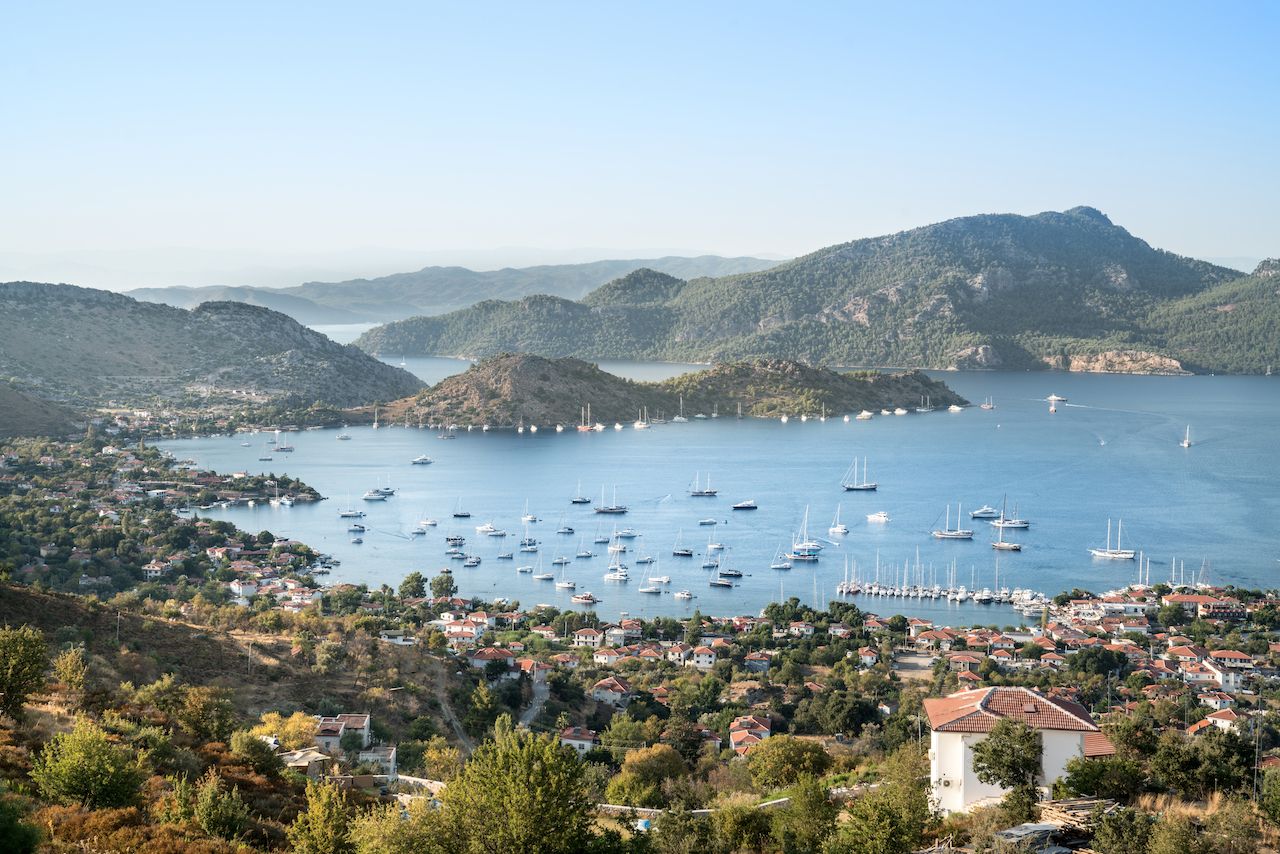 If you are in Bozburun, have dinner at the edge of town, your table right by the water, at the peaceful Bozburun Yacht Club. In Selimiye, the town on the opposite side of the Datça Peninsula from Bozburun, you may find stores selling international brands, but you’ll also find plenty of local artisans making beach jewelry and not a single international hotel chain.

Be sure to order some goat milk ice cream from one of the many vendors. They’ll play all sorts of games with you — almost like magic tricks with disappearing ice cream and multi-stacked cones — before relenting and serving up the curiously sticky, but intensely flavored, frozen treat.

If you’d like to venture to a Greek island, you’ll have to go to a town with an immigration control like Datça. You can explore Datça by night, where you can choose from several restaurants with tables set right out on the sand and lit by festive lanterns or strings of lights. Dine on small meze plates of yogurt dips, fried anchovies, roasted eggplant, and other goodies, followed by a whole roasted fish. (Be sure you know the exact price of the fish in advance.) Then wander along the wooden promenade toward the upscale late-night craft market.

The Greek island of Symi 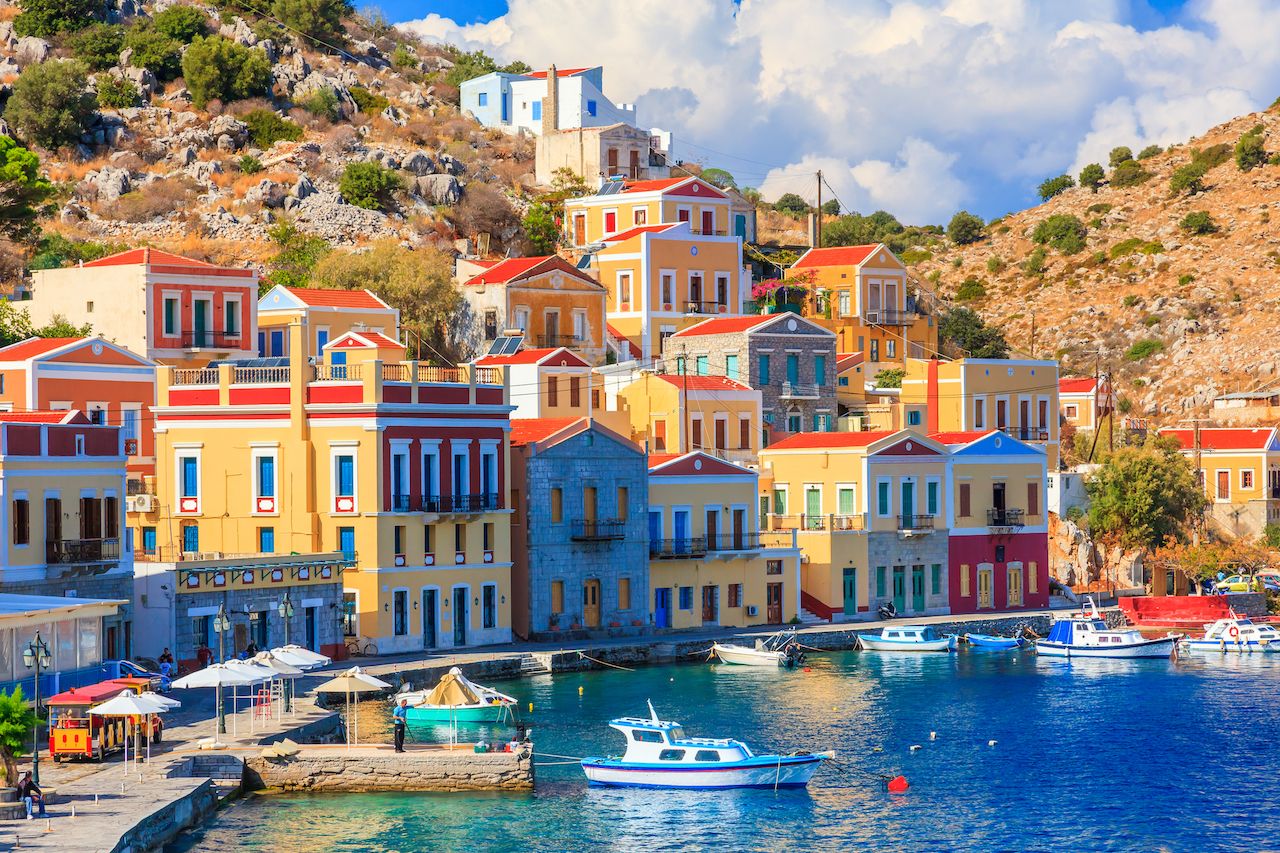 The Greek island of Symi lies very close to Datça. Once your captain has sorted out your immigration forms (probably with you in tow), you can head toward Symi. There, you’ll have to show your passport before anchoring. Symi feels much more international, and you’ll find boutiques and bars owned either by Greeks or Europeans of other nationalities. In Symi, have dinner at the edge of the harbor at Tholos, where you’ll be seated under olive trees with a view of the harbor lights beyond.

After departing Symi Harbor, head to the narrow, stunning Agios Georgios, or Saint George Bay, on the island’s eastern side. There, cliffs soar upward of 300 feet from the sea, yet the water is deep enough to accommodate sizeable sailboats. Swim ashore to explore the beach’s tiny white church, highlighted by the massive rock face behind it. Be forewarned, though: The beach is composed of tiny rocks, and you’ll want those reef shoes. 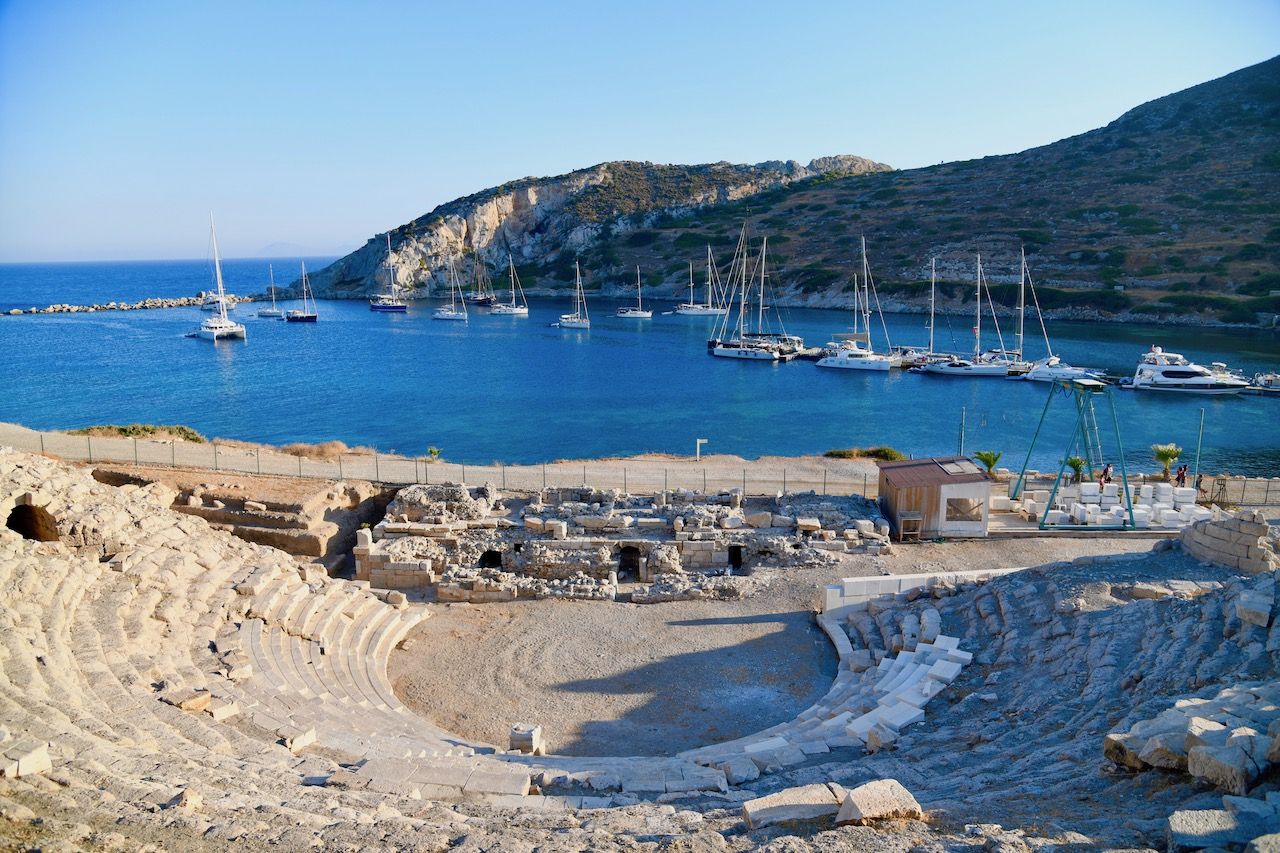 Another potential stop is Knidos, a city-sized museum of relics that date to 300 BC. Stunningly situated by a narrow isthmus with two protected harbors, Knidos was a major center in the ancient Greek Empire, which now is part of Turkey. Take a moment to walk to the top of the amphitheater for an incredible view of both harbors.

Walk a little further up the hills of this ancient metropolis, as we did on our last day, and you’ll find a still-functioning sundial. As the sun lowered on the horizon, the sundial confirmed for us that nighttime was not far away — and that, sadly, our cruise back to Bodrum, where we’d spend our last night on the boat, was just a couple of hours away.

TravelOn Your Next Trip To Turkey, Get Out of Istanbul and Head To Izmir
Tagged
Beaches and Islands Cruises Insider Guides Turkey
What did you think of this story?
Meh
Good
Awesome