While Istanbul is rightly lauded for its rich history and culture, the Turkish city shouldn’t be the only place you visit in this vast and fascinating country. The city of Izmir, on a bay in the Aegean Sea, is an excellent place to base yourself if you’re planning to visit the ancient ruins of Ephesus, explore Turkey’s wine and olive region, or get to know the beaches and thermal spas of the Cesme Peninsula. The most liberal city in Turkey beckons with an easy-going approach to life yet receives few foreign visitors. Here’s what you need to know about Izmir and its surrounding attractions.

Izmir is the most laid-back city in Turkey. 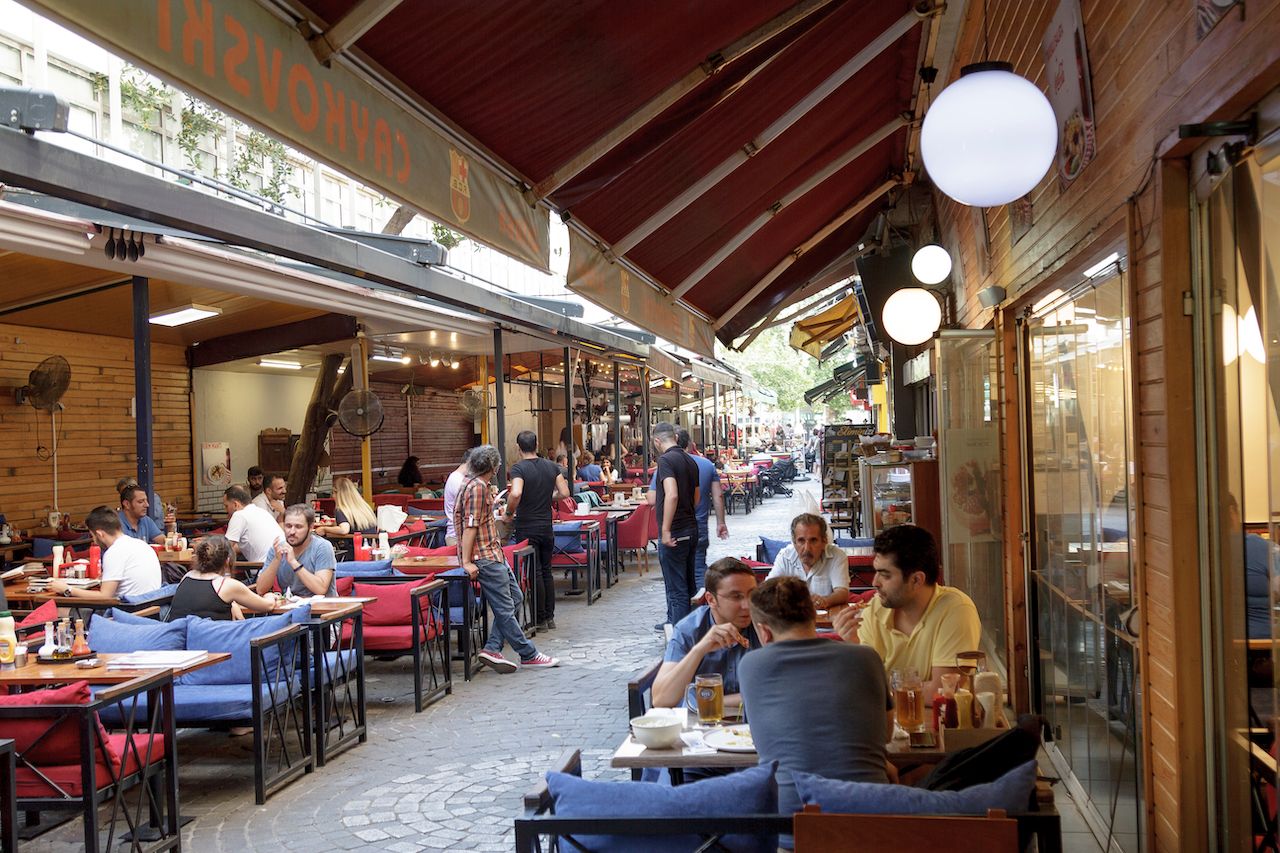 “Everyone in Istanbul and Ankara wants to retire in Izmir,” or so I was told by Ayça Kesici, an Izmir native and award-winning tour guide. With a population exceeding four million, Izmir is a sizeable city, but it offers a relaxed pace of life and easy access to the outdoors, Ayça told us. In just 15 minutes, you can be hiking in a pine forest, while in 30 minutes you can be swimming in the Mediterranean.

Izmir itself is situated on the shores of a beautiful bay. While you wouldn’t necessarily want to swim in that busy body of water, the sea views are lovely, and you can always grab dinner at an outdoor restaurant near the shore. On a summer night, those restaurants will be buzzing with diners until late into the evening, tables laden with grilled fish and small meze plates and locally produced wine flowing. On a warm August evening, you might find the women wearing skinny jeans and summery shirts that reveal their shoulders.

If summery attire and free-flowing wine doesn’t gibe with your image of Turkey as a Muslim country, you should know that Turkey also has a very liberal, secular side. While you’ll find neighborhoods in Istanbul as edgy as those in other big European cities, Izmiris will tell you their home is the most progressive of Turkey’s cities. As a port city, Izmir has long been open to influences from countries around the Mediterranean.

During the Ottoman Empire, Europeans came from Venice, southern France, and further afield to work in various industries and technical roles. In Izmir, these Christian expats became known as the Levantine Izmiris, and the business success of many of them can be seen in the so-called “Levantine Mansions” of Izmir today. Some of Izmir’s top industries are still run by the descendents of these western Levantines, and they continue to imbue the city with a more cosmopolitan worldview.

While a century ago Muslims were in the minority, today Izmir — like the rest of Turkey — is predominantly Muslim. Yet it retains its Christian Levantines and a small Jewish population of less than three thousand. 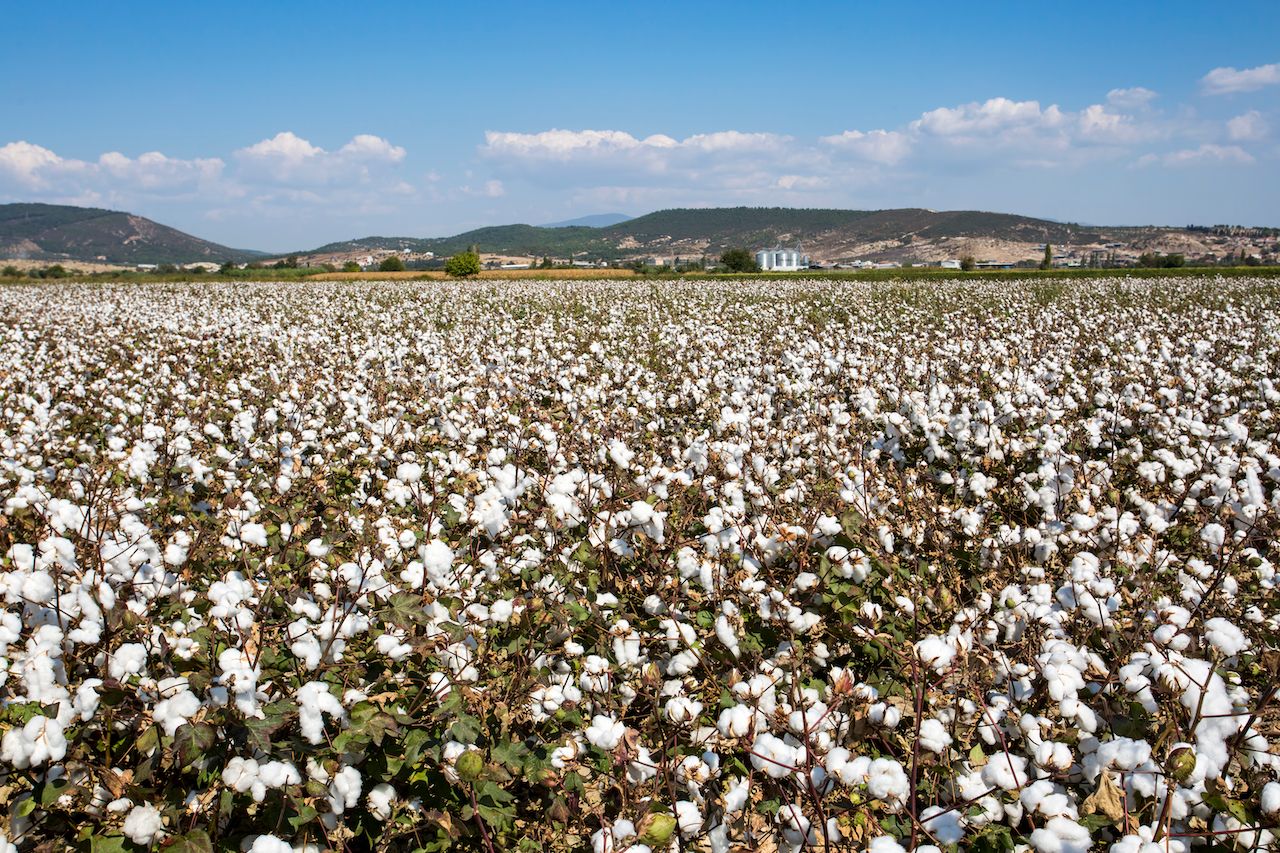 Calling Izmir the Milan of Turkey, as I heard while there, may be a stretch, but it is the textile capital of the country. You’ve probably seen “Made in Turkey” on a clothing label or two; if so, it likely came from Izmir, where companies like Hugo Boss produce a quarter of their clothing. On the fashion designer side, Izmir is known as the bride capital of Turkey. In the downtown area, you may see shop after shop selling very sparkly white wedding dresses.

Much of the cotton for the textiles grows in the Menderes, or Meander, Valley behind Izmir. Running through the valley is the Menderes river, called the Meander River in English, and the source of the English word “meander” for the odd way it loops across the valley floor. Beyond cotton, the region is home to many vineyards and some of the best wines in Turkey.

What this means for you as a visitor, beyond tasty food, is the possibility to go on wine and olive tours, for one. More significantly, the richness of this valley — and its proximity to the Mediterranean — means that the region was a favored destination for civilizations thousands of years ago. And Izmir is a great jumping off point to visit the ruins of at least one of these ancient civilizations.

Culture within and near to Izmir 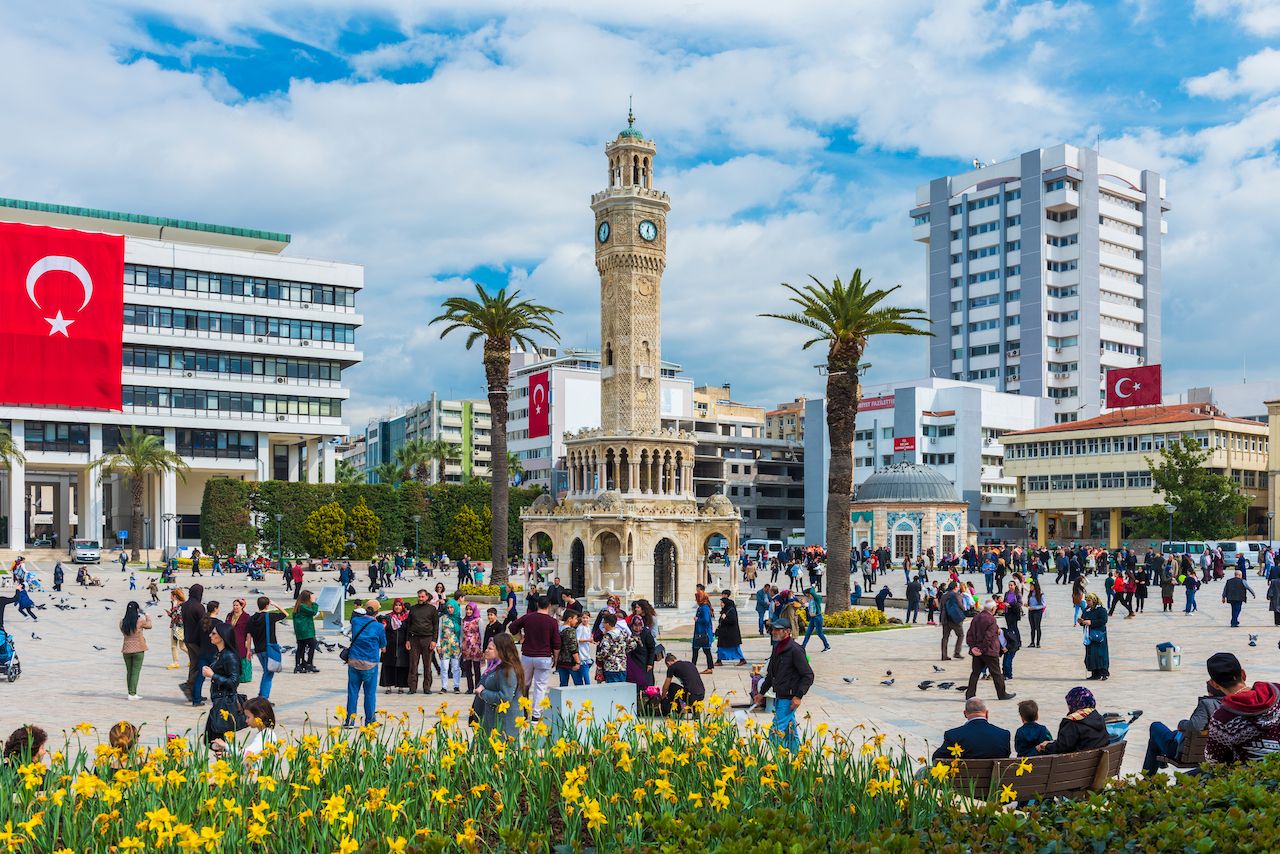 Before you head out of Izmir to see the remnants of those ancient cultures, you should visit its present cultural center. Head to Konak Square, Izmir’s cultural center and home to the 1901 clock tower that is the symbol of the city. Nearby is the Yali Mosque, the Izmir State Opera and Ballet, and the Archeology Museum of Izmir, which has artifacts from as far back as five millennia ago. You’re also close to İzmir’s major market district, called Kemeralti, a massive bazaar where you could spend hours shopping, haggling, and just absorbing the sights and smells. You’ll find seafood restaurants near there as well.

A 20-minute walk north along the waterfront from Konak Square leads you to the lovely white building of the French Honorary Consulate. There, you’ll find the Arkas Art Museum. It was established to show the art collection of Lucien Arkas, a Levantine Izmiri industrialist whose ancestors came from Marseilles, France. In addition to classic works, the museum features excellent rotating exhibitions, as well.

About 45 minutes south of town is the Key Museum, a gallery with completely different works of art from the Arkas Gallery. Created by two sons of the Izmiri business tycoon Erdogan Özgörkey, the museum is a 75,000-square-foot space filled with mind-blowing automotive vehicles — from the first models of Mercedes-Benz, Porsche, and Cadillac to motorcycles and a collection of over 2,500 model cars. Even if you thought you weren’t into cars, this ode to one of humanity’s most influential (for better or worse) inventions will make an impression.

The ancient city of Ephesus 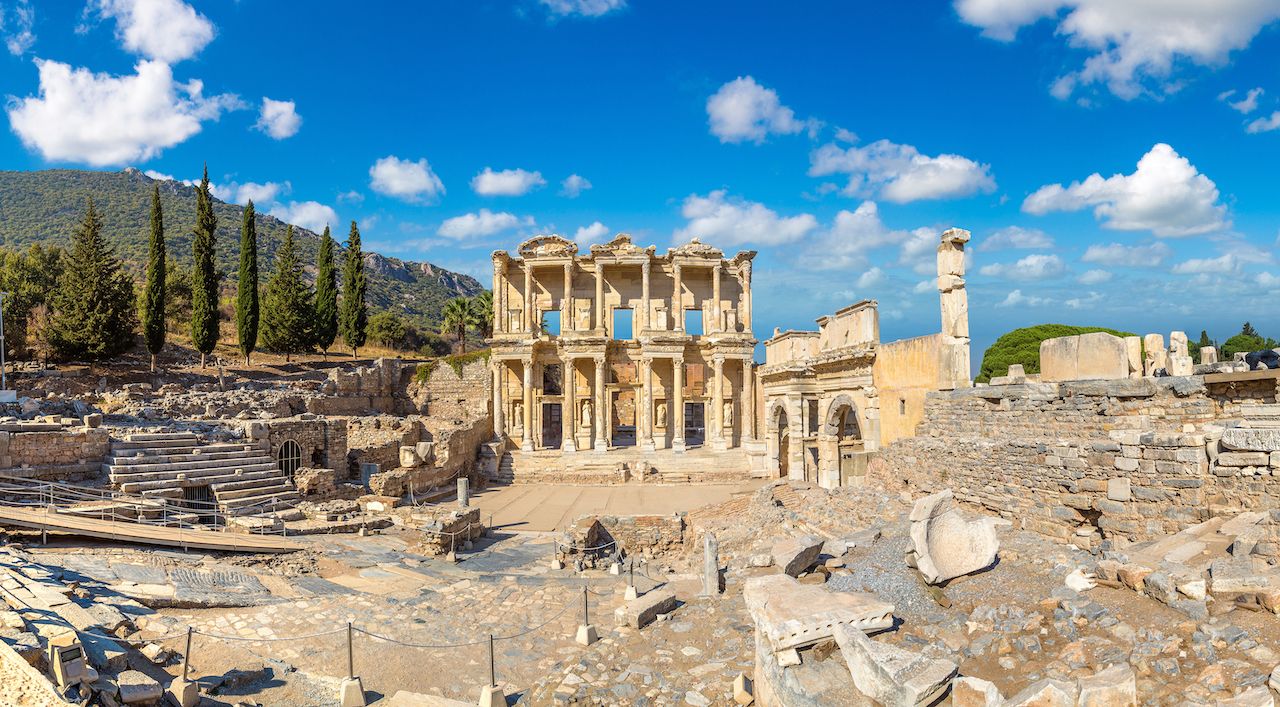 The Key Museum is on the way to Ephesus, a remarkable place that is the reason many travelers come to Izmir at all. Ephesus was an ancient Greek city that came under the rule of Roman governors in the first century BC. It continued to grow until it became the biggest Roman city in Asia Minor, with estimates putting the population between 200,000 and 400,000 residents. Ephesus had a library that was the third largest in the world at the time, a coliseum that could fit 25,000 people, a glorious temple, statues, open air markets, heating and plumbing, and attractive housing for its wealthier residents.

All that is visible in Ephesus today. You can walk down the market gallery where vendors sold their wares to locals and visitors. You can see the backgammon boards built into tables, where the merchants whiled away the hours. You can head to the wealthy hillside homes and tread on walking paths built above them. You’ll marvel at the lay-outs of the rooms, the shopping lists carved onto tablets in the kitchens, the doodles etched into the walls of kids’ rooms two thousand years ago.

While Ephesus once housed an impressive Temple of Artemis, and thereafter turned its attention to the Roman Gods, it later became an important center for the growing Christian religion. The apostle John spent his last years in the area, and he may have written the Gospel of John in Ephesus.

Give yourself plenty of time to see Ephesus, and tour it with a knowledgeable guide if you can. We were fortunate that Ayça’s schooling and early work were in archeology, and she helped make tangible the lives of the ancient Romans who once walked Ephesus’s streets. After marveling at the ancient metropolis, head to the Ephesus Archeological Museum in nearby Selcuk. You’ll be able to see more of the richness of the ancient city, and learn a bit more about its Greek and Roman cultures. 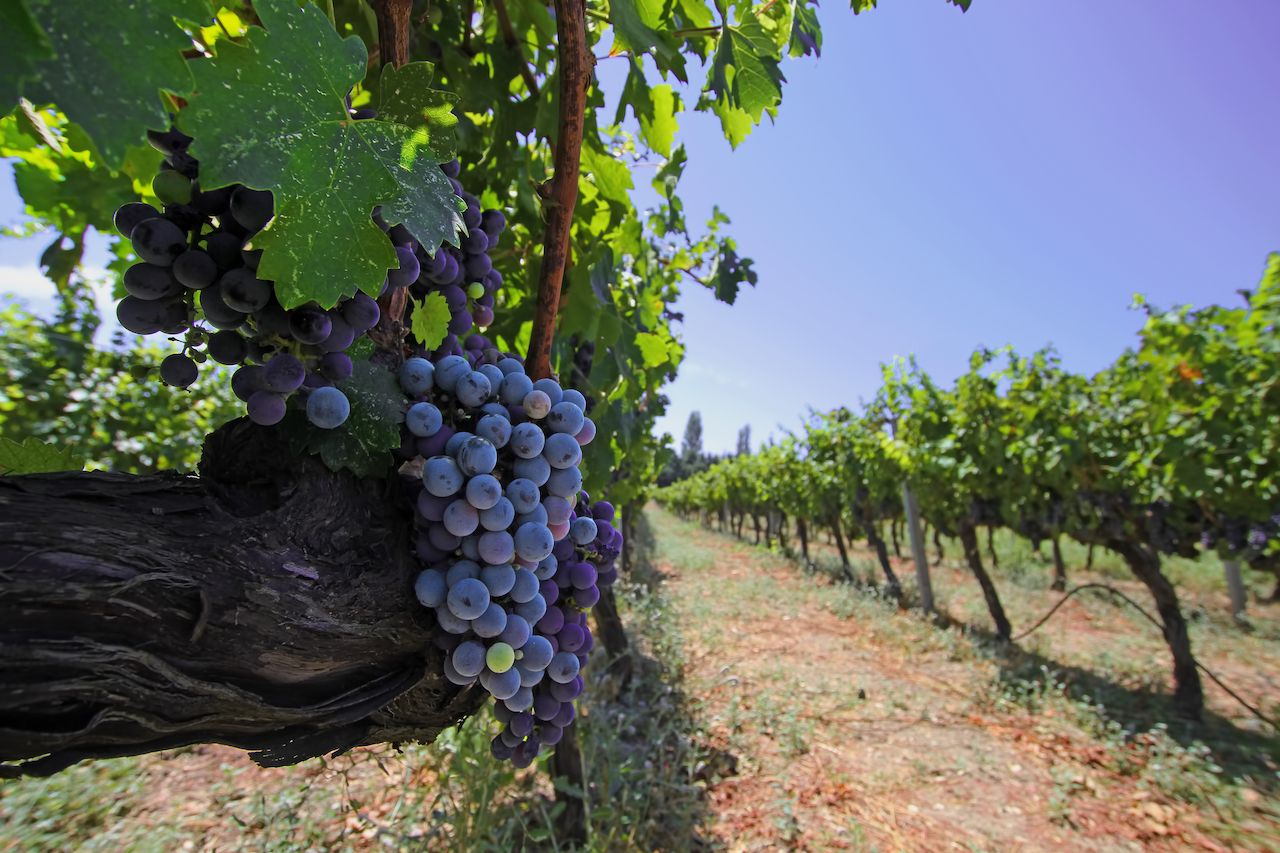 Half of all the wine produced in Turkey is from the Aegean region around Izmir. If you’ve spent the morning in Ephesus, on your way back to Izmir you could stop at Lucien Arkas Vineyards. They’ve established Tukey’s largest organic vineyard on a single area of land, cultivating native varietals and many brought from other regions. In the tasting room, you’ll understand why their wines have won awards and accolades. You could also stay for dinner in the winery’s excellent restaurant.

The wine region of Urla is in the opposite direction, due west from Izmir. Among the wineries to visit there are Usca Winery and Urlice Vineyards, where you can also stop for lunch and wood-oven-fired pizzas. The Urla region is also a big producer of olive oil, and you could spend an entire day here focusing on wine and olives. 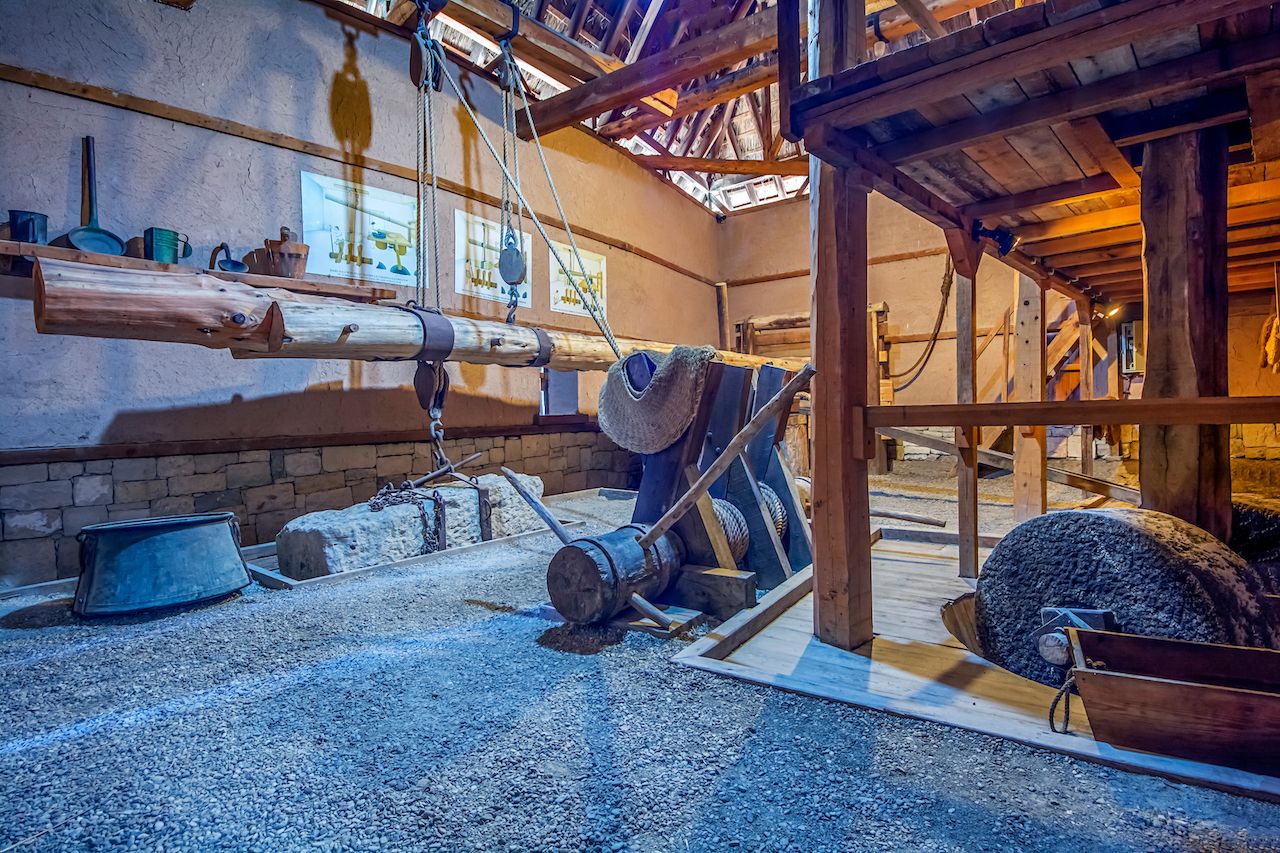 In fact, the Kostem Zeytinyagi Museum in Urla is the world’s largest museum dedicated to olive oil. It’s a fascinating look into the cultivation and production of olive oil, an essential ingredient in some of the best cuisines in the world. You’ll see ancient olive presses and learn how olive oil has been produced and stored throughout history. Kostem runs an organic olive farm and works to educate the community about environmental issues. You can taste olives and olive oils, peruse the shop with every olive oil product imaginable, or stop for a bite at the on-site restaurant and cafe. 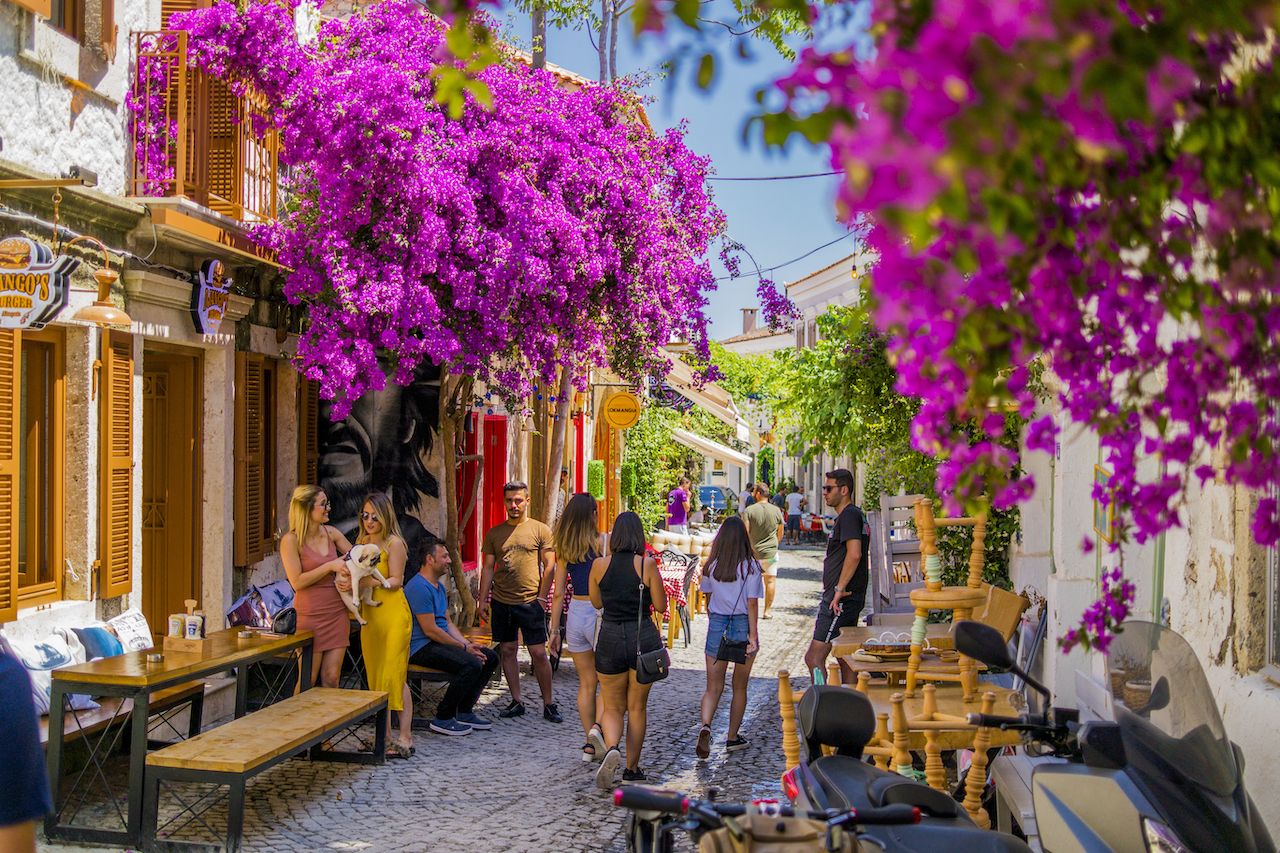 The Urla region is on the Cesme Peninsula, which is a popular resort area for Izmiris. At the tip of the peninsula is the town of Cesme, just an hour’s drive from Izmir. The town itself, decorated with a 500-year-old fortress overlooking the water, is packed with great places to shop and waterside restaurants. You can drive to over a dozen nearby beaches like Ilica and Altinkum, each with its own vibe.

Because of the peninsula’s many coves, you’ll find diverse wind and swell conditions; while some beaches are calm and perfect for small kids or swimmers, windier beaches can be packed with windsurfers in the afternoon. Yet others even have enough waves to surf on. Cesme is also famous for its hot springs, which were considered to have healing properties, and a handful of hotel spas are still centered on its thermal springs and mud baths.

Food + DrinkTurkey Has the Best Breakfast in the World, and It’s Not Even Close
Tagged
Travel Trip Planning İzmir, Turkey
What did you think of this story?
Meh
Good
Awesome