No longer is restaurant dining simply something families do on Wednesday nights when your parents forget to go grocery shopping. It’s not merely a means of filling you up, but an experience almost like going to the theater. Food and restaurant enthusiasts not only expect a delicious and inventive menu, but a presentation to match, an immersive venue, and stunning views to go with your $27 guacamole. Restaurateurs know this, and they’re giving the people what they want by opening extreme restaurants in imagination-defying locations.

From dining under a waterfall in the Philippines to shivering in an ice restaurant in Finland, these are the most extreme restaurants you can experiences all over the world. 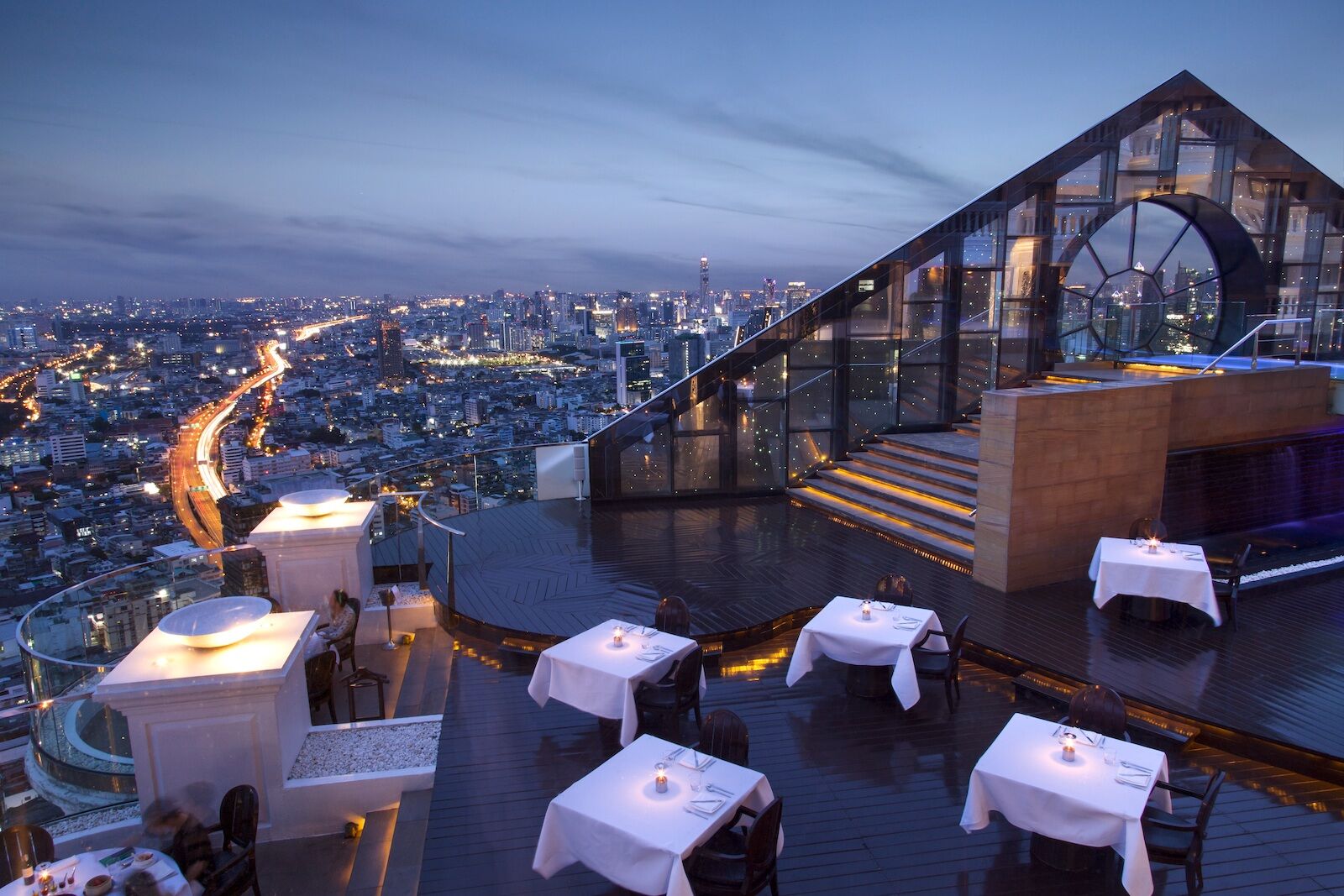 Why you should go: Come for the views 820 feet above the Bangkok skyline, and stay for the creative specialty cocktails.

Rooftop bars are a dime a dozen. Restaurants on the top floor of a hotel with panoramic views aren’t exactly breaking new ground these days. But the Sky Bar at Lebua at State Tower in Bangkok is redefining the rooftop dining experience. You’ll be sitting on a precipice 820 feet in the air – one of the highest rooftop bars in the world – surrounded by open-air panoramic views of the city skyline. While you’ll certainly be safe perched atop the tower, those with a fear of heights will still feel acute, though fleeting, pangs of fear as they behold the awe-inspiring view.

In addition to its stunning backdrop, Sky Bar is known for its creative take on mixology, serving up imaginative cocktails. Its signature drink is the Hangovertini, made with Chivas Regal, sweet vermouth, rosemary syrup, and fresh apple juice. There’s also the popular Purple Sky, with Elyx vodka, Pimms No. 1 cherry brandy, green apple, butterfly pea, and ginger beer. While Sky Bar doesn’t offer a full dinner menu, there’s a menu of bar bites to help soak up those specialty cocktails, with options ranging from crispy chicken tacos to a chili lobster roll. And Lebua at State Tower does offer a number of restaurants in the skyscraper, including Breeze, perched on an outdoor terrace and only accessible by sky bridge. 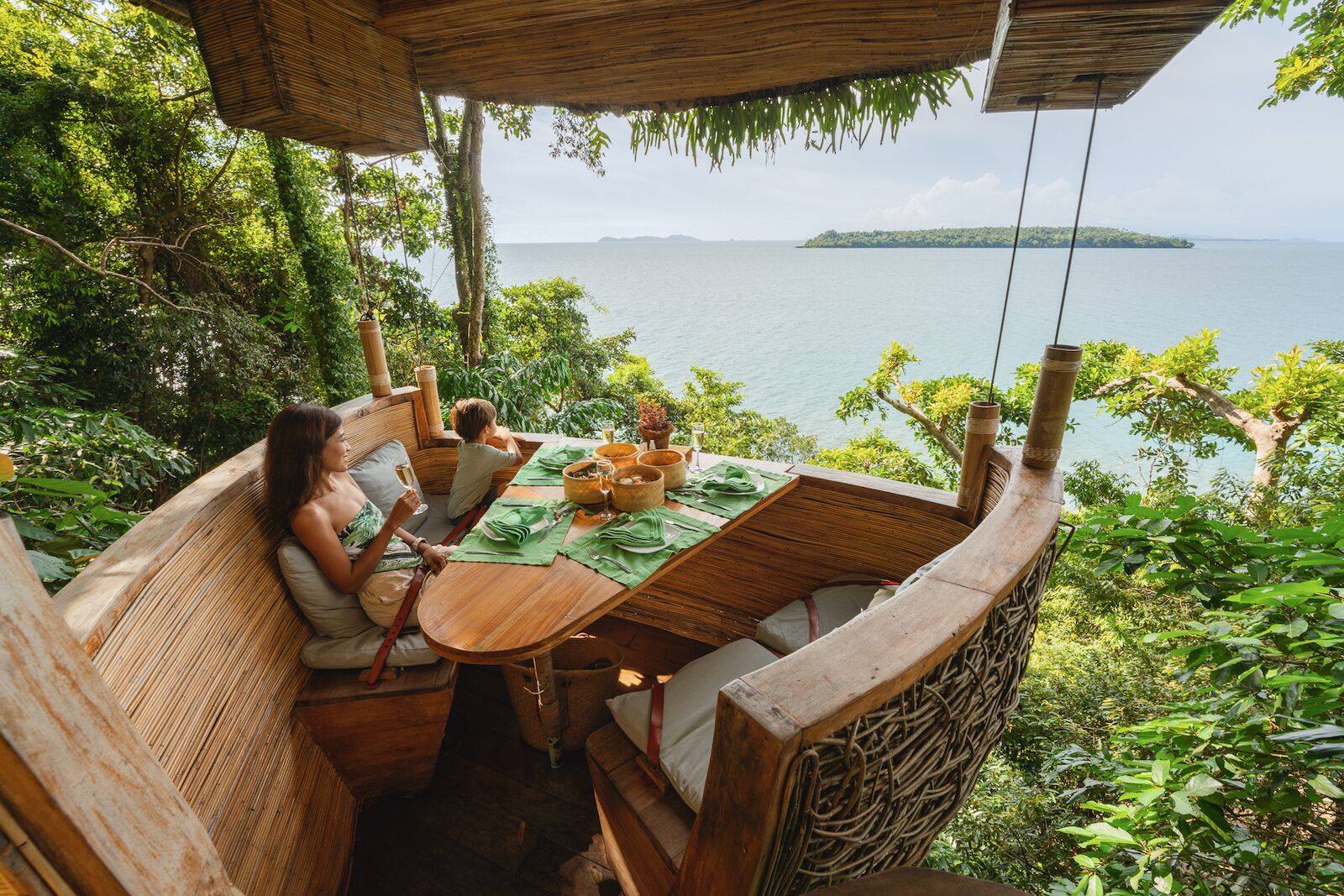 Why you should go: Where else are you going to see servers so dedicated they’re strapped into harnesses?

Treehouse accommodations have had their moment, from this hotel in Finland to these Airbnbs around the world. But treetop dining? That’s something you’ll want to travel to the Soneva Kiri resort on Koh Kood, one of the largest yet least populated Thai islands, to experience.

As if the prospect of devouring fresh seafood infused with Thai flavors like galangal root and kaffir lime — much of which is sourced from the ecoresort’s organic garden — wasn’t exciting enough, perhaps the prospect of having your meal delivered via zipline will grab your attention. Or maybe it’s the bamboo pods where diners are seated and then hoisted up 20 feet into the rainforest canopy by cables that’ll sell you on the experience.

Designed in the image of a bird’s nest and woven by local craftsmen, each pod can accommodate up to four people. Reservations are required, and diners have two options for experiencing Treepod: the one-hour Gourmet Picnic or the two-hour Luxury Picnic. Both come with complementary views of the Gulf of Thailand, but the Luxury Picnic also includes wine and Champagne tastings to really elevate your meal. 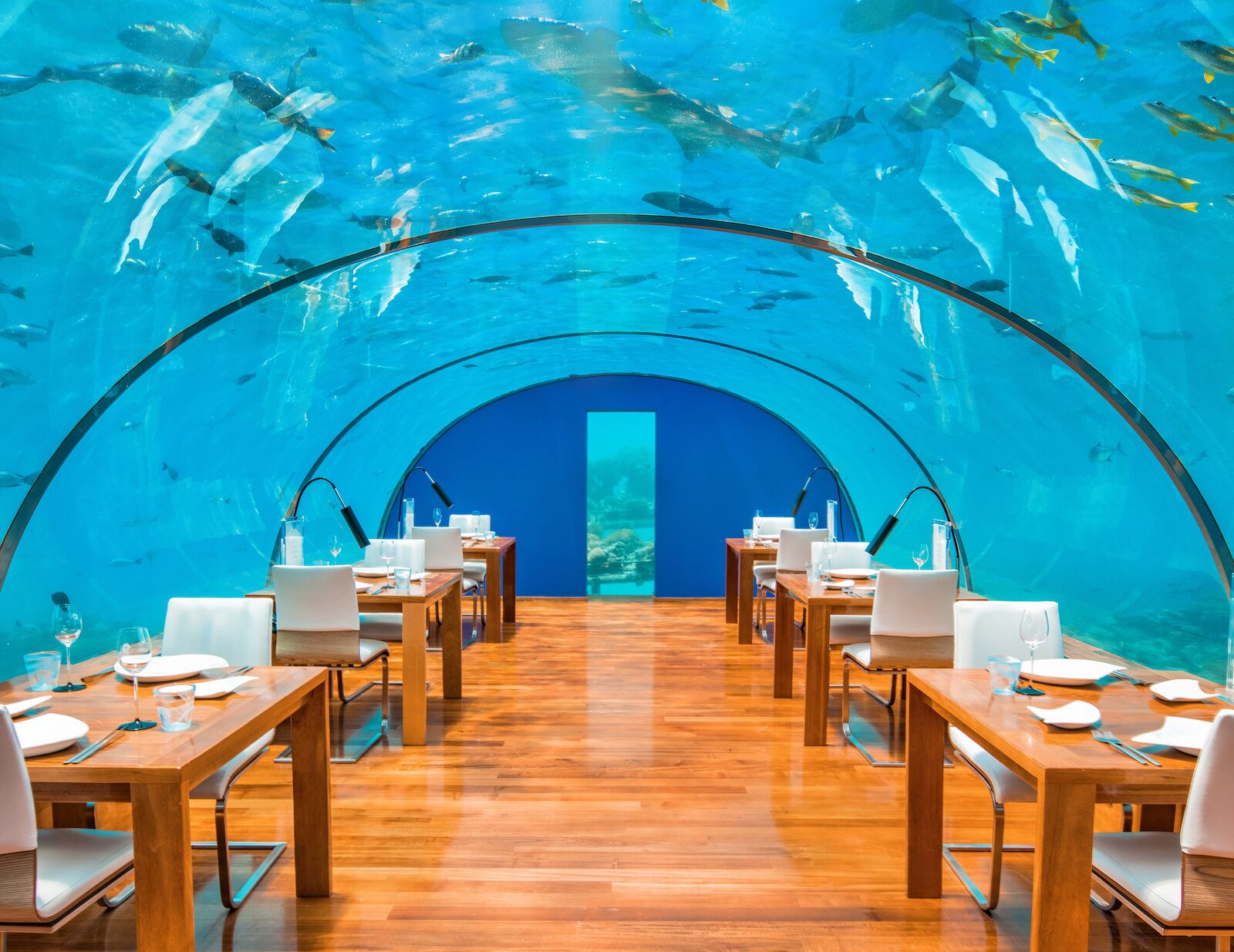 Why you should go: It’s like scuba diving but with fine wine.

Ithaa is taking oceanview dining to a whole new level — one 16 below the surface of the Indian Ocean. Part of the ultra-luxe Conrad hotel on Rangali Island in the Maldives, Ithaa claims to be the the only underwater restaurant in the world. Dining there is like eating at a Michelin-starred restaurant in the middle of an aquarium — only more exclusive given its remote and romantic location. In addition to prix fixe lunches and dinners — during which guests are encouraged to don their island best — the restaurant is open for chic mid-morning cocktails.

The chefs at Ithaa specialize in fusion cuisine, blending South Asian and Western flavors. The menu is split into seven courses — aperitif, amuse bouche, appetizer, entree, cleanse, passion, and indulge — taking diners on a journey from small bites like caviar blinis and truffle dumplings to heartier fare such as lobster carpaccio with reef fish tartare, yellowtail king fish with saffron Champagne risotto, and black Angus beef tenderloin with apple and goose liver tortellini. For dessert, past diners have raved about the restaurant’s Valrhona chocolates with pralines, caramel sable, and mango sorbet — but you know anything Ithaa plates up is going to be equally sumptuous. 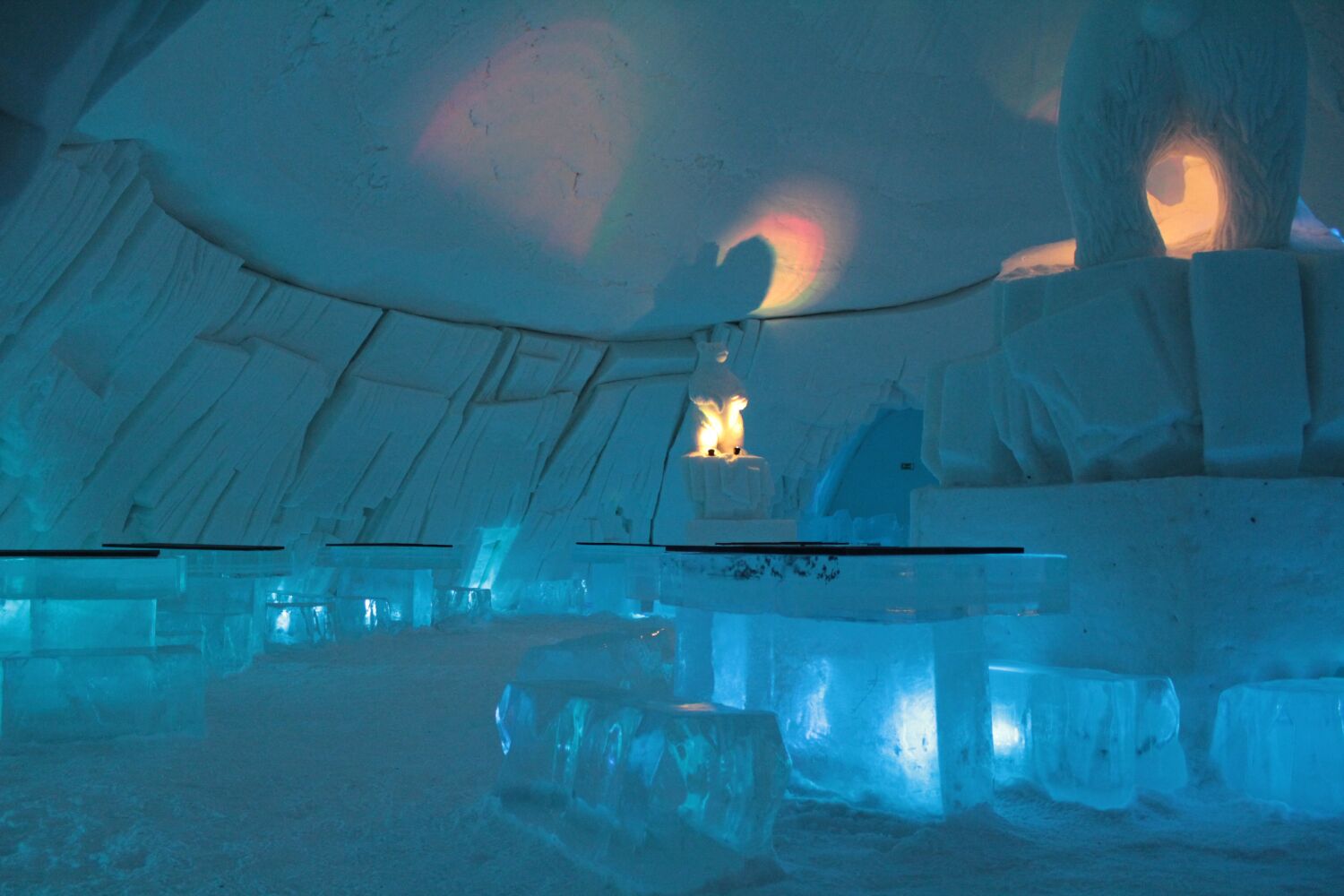 Why you should go: You can sample reindeer meat three ways and wash it down with insanely chilled spirits.

In the middle of Arctic Finland, 600 miles north of Helsinki, there’s a hotel that’s only open between late fall and early spring. In the off season, it not only shutters but ceases to exist. That’s because this dreamy hotel is made entirely of ice and snow — roughly half a million pounds of the two combined — including the restaurant and bar.

Much as the very foundation of the SnowVillage hotel celebrates its surroundings, the menu at its Ice Restaurant showcases the tastes of Finnish Lapland. Reindeer features prominently — as carpaccio, shanks, sauteed, and smoked, to name a few possible preparations — alongside Arctic char, Bothnian whitefish, cloudberry and lingonberry jam, and a variety of root vegetables including Lapland puikula potatoes. You may even get to sample Finnish goat cheese. The restaurant’s three-course menu is 70 euros per person, and reservations are required.

For the perfect complement to your meal, be sure to stop at the hotel’s Ice Bar for a pre- or post-dinner drink, be it a frosty cocktail or a cup of cocoa. And if the whole experience sounds a little chilling to you, have no fear: The hotel has a second restaurant, the Log Restaurant, where guests can also dine off the ice.

Why you should go: You eat with your hands while soaking your feet.

Where to find it: X8VW+J23, Tiaong, Quezon, Philippines

They say you should wait 30 minutes to swim after you eat. But there’s no rule against eating while you’re splashing around at the base of a waterfall. At the Villa Escudero Plantations and Resort outside of San Pablo City in the Philippines, that’s exactly what guests are encouraged to do.

Lunch at the Labasin restaurant is served kamayan-style beneath an artificial waterfall, with diners’ toes submerged in a refreshing pool at the base. Kamayan is a Tagalog word meaning “by hand” that refers to a type of Filippino buffet — only instead of loading up your plate at a separate buffet table, kamayan meals are spread out right there on the dining table, and they’re meant to be enjoyed family-style without plates or cutlery. Crispy lechon (roast suckling pig), chicken adobo, lumpia (Pinoy spring rolls), and a variety of grilled seafood are among the delicacies you might expect to find at Labasin’s traditional feast — along with heaps and heaps of rice, of course.

Dining in the Dark — Various locations 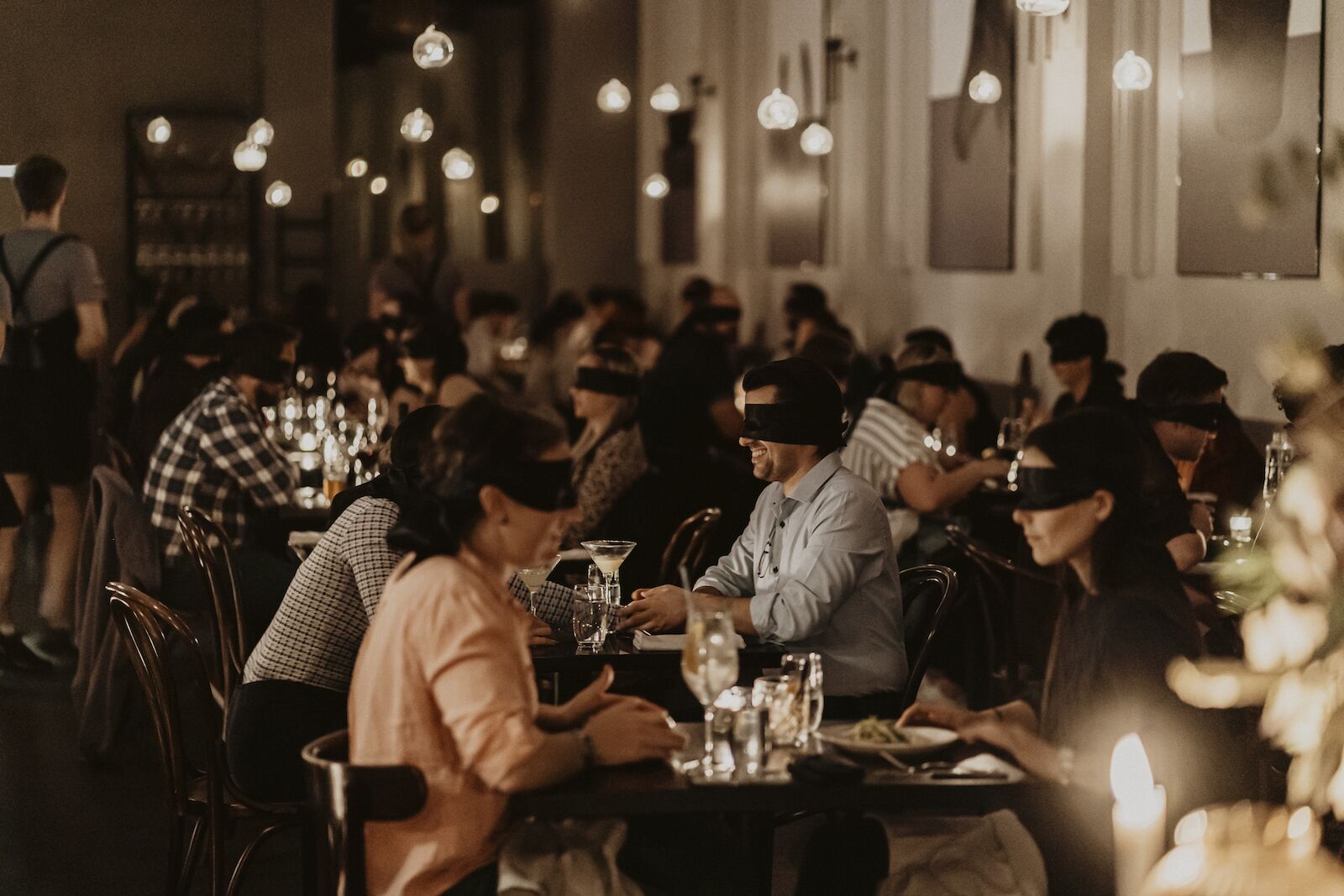 Photo: Dining in the Dark

Why you should go: Studies suggest flavors are most intense when you can’t see what you’re eating.

Where to find it: Various locations to be announced

It’s often said that you eat with your eyes first. At Dining in the Dark, a pop-up restaurant experience that’s hosted in several cities around the US including San Francisco, the idea is that dining blindfolded will enhance the way you smell and, most importantly, taste your food.

While the experience revolves around three set courses, diners can choose between three themes: vegan (green), seafood (blue), and meat (red). Each of the three menus is thoughtfully designed to showcase a variety of textures and creative flavor combinations, from soft and crispy to sweet and salty. The exact dishes you’ll be eating are a surprise until the last minute, but the chefs are happy to accommodate any allergies or dietary restrictions.

A culinary experience unlike any you’ve probably had before, Dining in the Dark lasts for 90 thrilling minutes and costs $80 per person.

Food + DrinkThe 15 Most Expensive Luxury Restaurants in the World
Tagged
Restaurants + Bars Thailand Maldives Finland Philippines
What did you think of this story?
Meh
Good
Awesome