Among the wonders of Laos are its vast and wondrous limestone caves. From a lovely shrine packed with over 40,000 statues to a vast wartime shelter to a flooded underground cavern to a lengthy river-passage carved through a mountain, these caves offer more than a cool respite from the sweltering heat. The varying caves offer a taste of Laos’ ancient Buddhist culture, a profound lesson in history, and exhilarating adventure. These are our favorites. 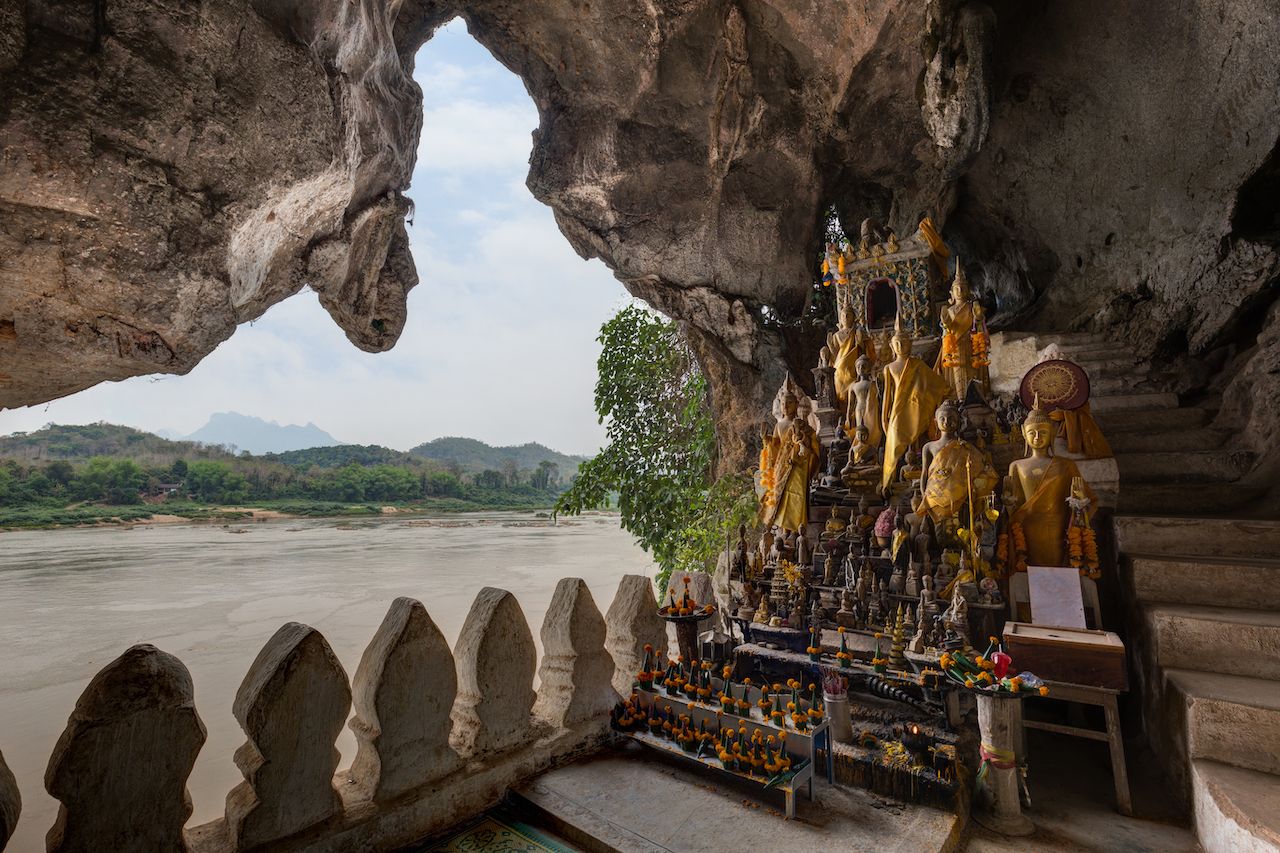 Embedded into riverside limestone cliffs and dating back thousands of years, the caves of Pak Ou are home to over 4,000 Buddha statues. Serene figures of all sizes, colors, and positions line the floor and walls. Cobwebs grace the older figures while bright paint decorates the newest.

You’ll have to take a boat down the Mekong to reach the Pak Ou Caves, located 15 miles north of Luang Prabang. Disembark at the wooden dock and follow the steps up to the first, and most popular, of the two caves. Inside, soft light illuminates a staggering collection of Buddha statues.

Follow a steep stone staircase up a cliff to the second cave. This quiet, uncrowded sanctuary is smaller than the first and similarly teeming with Buddha statues. You’ll need a flashlight to explore further than the entrance. The best time to visit the Pak Ou caves is in the afternoon. The morning tour crowds tend to detract from the caves’ spiritual ambiance. 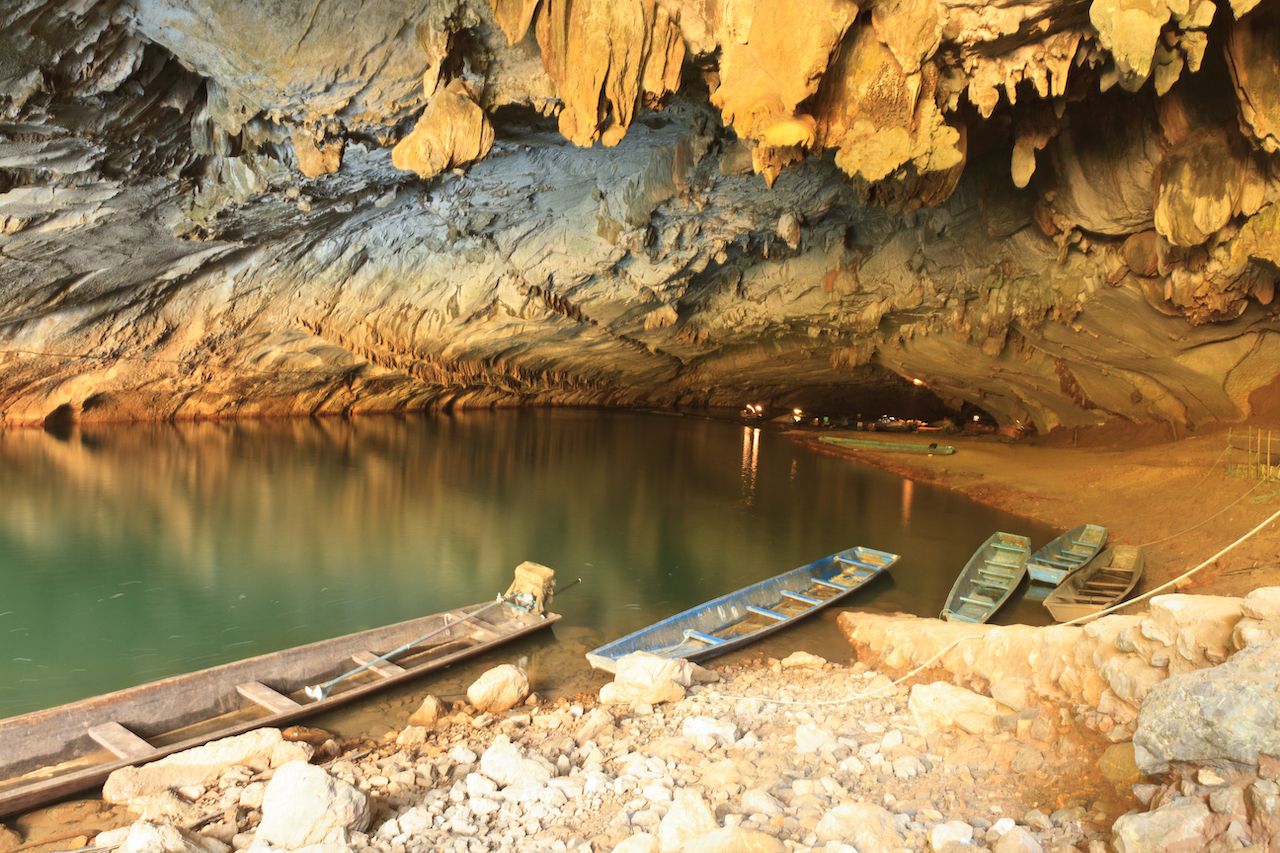 A vast passageway tunneled through a limestone mountain by the Hinboun River, Konglor Cave is home to innumerable rock formations. Only navigable by boat, the cave stretches out over four miles. Local people use the river that flows through the cave for transporting goods, and they also run tours that allow you to explore this geological wonder from end to end.

Step into a wooden boat at the mouth of Konglor Cave with your head lamp and life jacket; when you sit down, make sure you have a firm grip. A tour of Konglor Cave is no pleasure cruise — it’s a thrilling, high-speed boat ride through the pitch black.

The bright light in the distance doesn’t mean you’re at the other side. Partway through the dark cave, you’ll stop at a walkway. This is your chance to see the cave’s stunning formations up close, as colored lights give the fascinating stalactites and stalagmites an otherworldly glow.

Back in the boat, you’ll continue to the cave’s largest chamber — 300 feet wide and 330 feet tall — before exiting into the blazing sunshine on the other side of the cave. Here, you can break for lunch or a snack and relax before making the return trip at an exhilarating speed. It’s best to visit Konglor Cave during the dry season, from November to April. 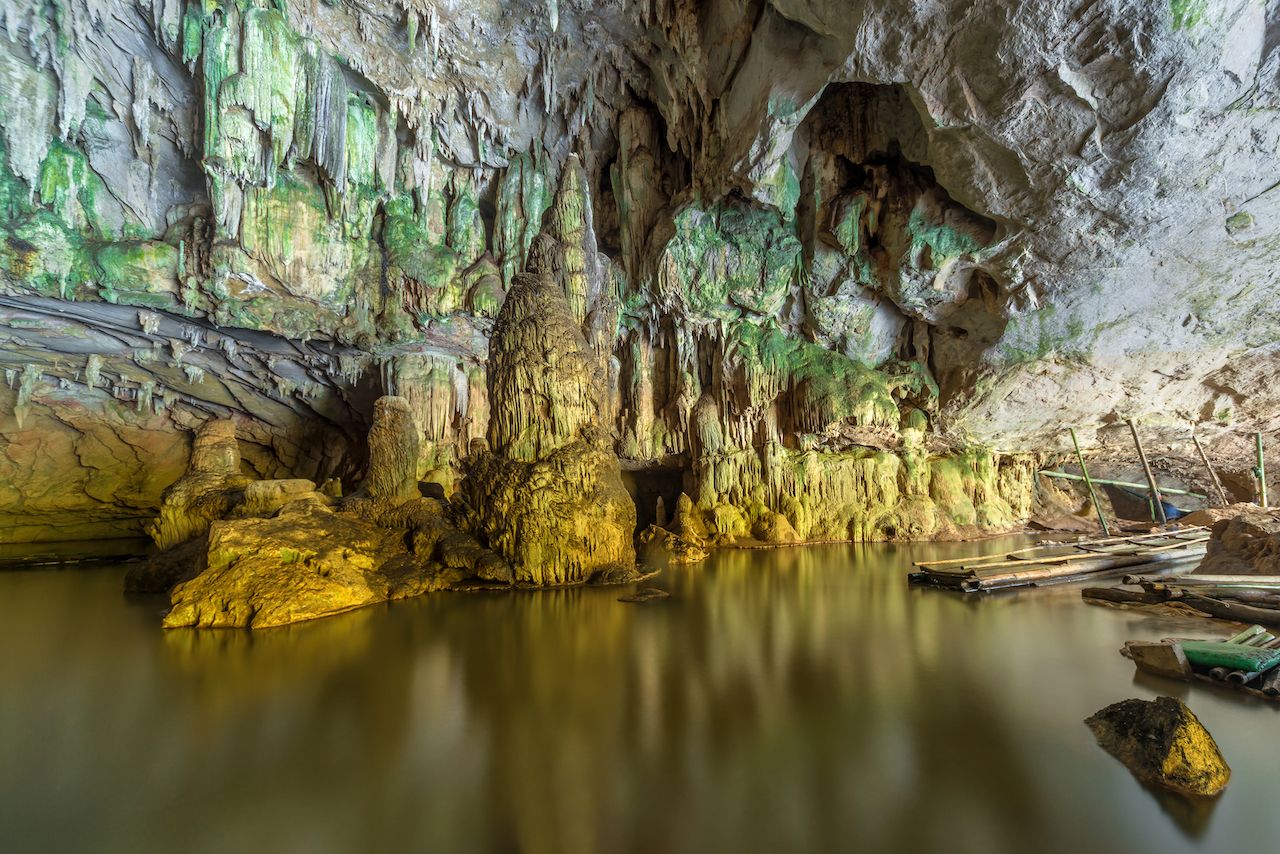 Famous for outdoor adventure and natural beauty, Vang Vieng boats karst formations packed with visitor-friendly caves. The Water Cave, four miles north of town, is the perfect place to cool off on a hot day.

Rent an inner tube, headlamp, and a drybag for your valuables at the entrance, and make your way into the pool at the mouth of the cave. From there, you’ll follow your guide through the flooded cave. Floating on an inner tube, you’ll pull your way through the narrow passageway using a rope attached to the cave walls. Illuminated only by your headlamp, the cave has a spooky atmosphere if you’re alone. When the cave gets jammed with inner tubes and tourists, the splashing and laughing make for a different kind of enjoyment.

Arrive early to avoid crowds, and wear footwear you don’t mind getting wet — you’ll have to wade through the water to get your tube over the shallow patches. The best time to visit is at the beginning or end of the dry season when the water level in the cave is ideal. Not so high that your head bumps on the ceiling and not so low that your tube drags on the bottom. 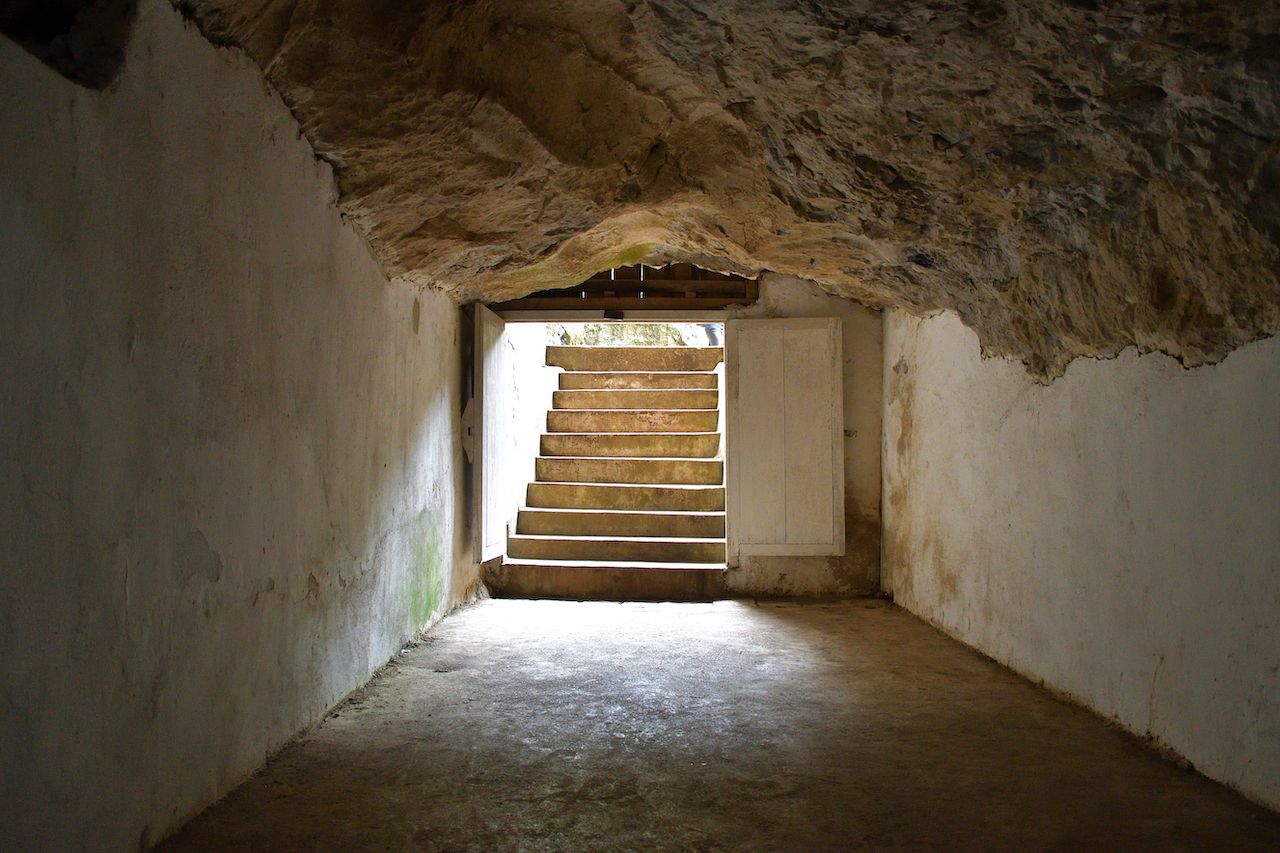 Within the mountains of Laos’ northern Houaphan Province, you’ll find the Vieng Xai caves, a sprawling subterranean complex known as the “Hidden City.” During the 1960s, these caves housed over 20,000 people, including civilians and Pathet Lao soldiers. The caves provided protection from the live ammunition dropped over Laos during the Vietnam War bombing campaign.

You won’t find stalactites in any of these liveable caves and passageways. The sophisticated construction includes underground military barracks and the Pathet Lao headquarters, as well as a school, hospital, radio station, and a theater. Of the nearly 500 limestone caves in Vieng Xai, seven are open to the public. Tours in English include an audio guide and an English-speaking local guide who accompanies you to the caves.

Life underground may have been safer than above, but it sure wasn’t easy. To avoid becoming targets, people would only come out of the caves at night to farm and cook. Livestock and crops were frequently destroyed by bomb raids. And the fear of a chemical attack was ever-present — though thankfully never occurred — and the Russian air-circulation pumps that you can see were never used.

Some caves are quite far apart, so it’s best to rent a bicycle from the visitor center, and don’t forget to bring a sweater to keep warm in the chilly caves. Because travel throughout northern Laos is difficult and dangerous during the rainy season, the best time to visit Vieng Xai is between November and April. 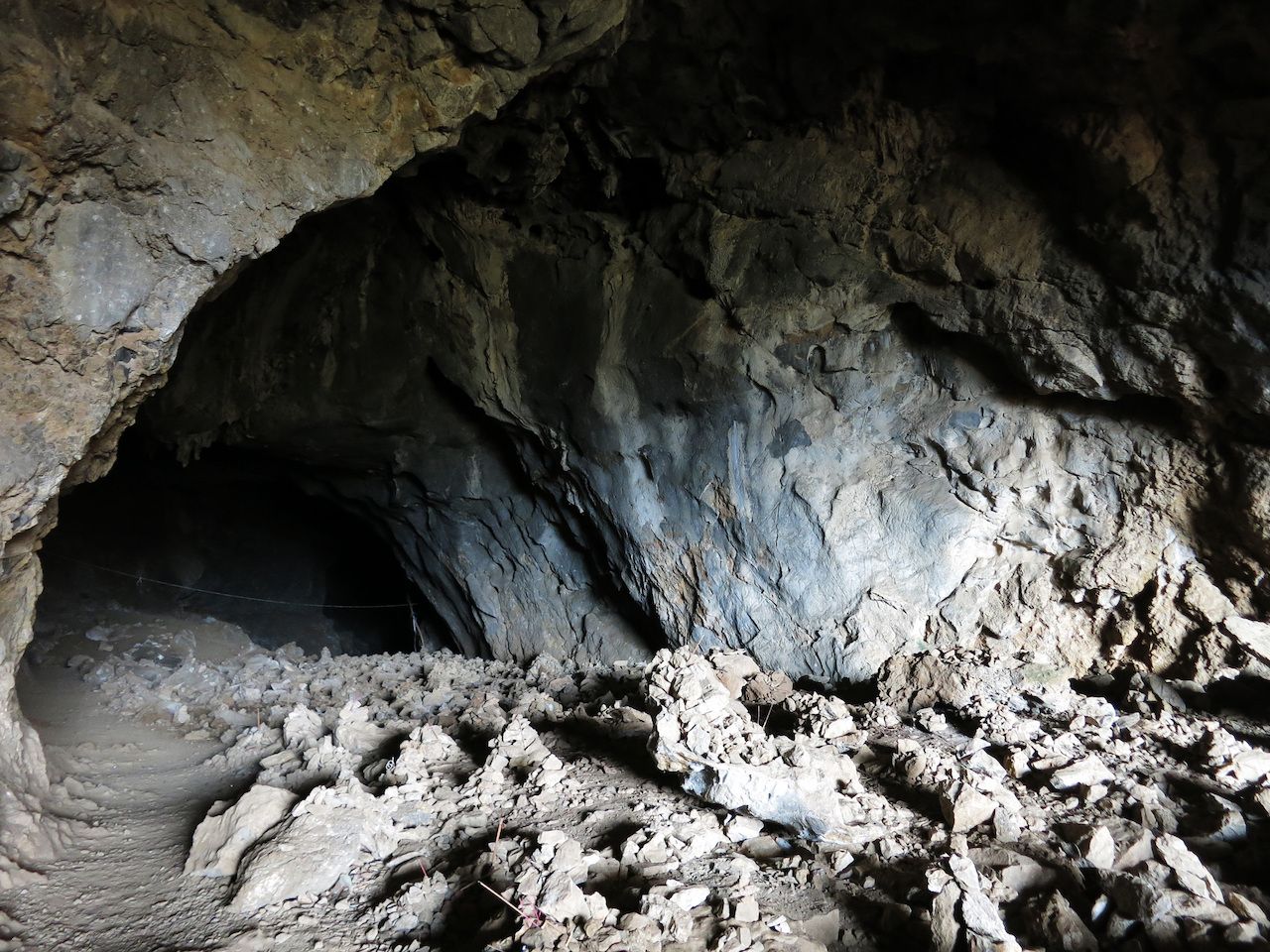 In northern Xieng Khouang Province — one of the most heavily bombed places in the world — lies Piu Cave. A visit to Piu Cave, the site of a devastating missile strike, is an important reminder of the victims of war. A single attack on Piu Cave ended the lives of nearly 400 innocent villagers as they sought shelter. The blast scorched the living, collapsed the cave walls, and left no survivors.

Today, a small museum gives visitors a sobering glimpse of the aftermath of the missile strike. At the base of the trail up to Piu Cave is a memorial shrine: a statue of a grim-faced man holding the lifeless body of a child.

The steep staircase, with rickety handrails you should use cautiously, leads up past a golden Buddha statue, grave markers, and bomb craters before reaching Piu Cave itself. The ceiling is still blackened from the strike, and cairns of rubble litter the floor where locals light incense for the dead. The resilience of the Lao people in the face of tragedy is both heartbreaking and inspiring.

Be sure to avoid the rainy season from May to October when you visit. Piu Cave is especially busy on November 24, the anniversary of the missile strike.

8 things you can only experience in Laos

A unique journey into the heart of Northern Laos