Food and travel go hand in hand. Yes, you need some sustenance to get where you’re going, but restaurants, food trucks, farmers markets, and anywhere else you can buy something to eat all provide insight into the culture and history of a place.

The latest issue of the travel magazine Fifty Grande shines a spotlight on food across the United States that will tug on the heartstrings of anyone with fond memories of road trip pit stops and surprising meals after hours of travel.

Importantly, the well-known food centers of New York, Chicago, and San Francisco don’t get the entirety of the magazine. From the rebirth of Denver’s Casa Bonita to a look at gas station meals in Mississippi, Fifty Grande’s food issue is a guide to the eats that need to be on your radar no matter where you’re touching down for a visit.

“I’ve always said that we’re a mash-up of travel, music, and food, and travel leads the way,” says Fifty Grande founder and editor in chief Chris Walsh. “Initially, this was more about me wanting to create a magazine about these three topics because they are what I love, but it turned out lots of people love this mix. It was also a way for us to stand apart, since no other travel magazines do exactly what we do.”

Walsh and his team ran audience surveys for Fifty Grande to have a better gauge on what people are interested in. They found that 65 percent of their audience considers food as important in their lives as travel, and 35 percent said the same for music.

While travel stories go up on the Fifty Grande site, there’s something special about the experience of reading a physical magazine. The words, design, and art all interact differently on the confines of a page than on a screen.

“If you’re just looking for five places to go this year, you’ll find that in this issue, but you’d be missing the best part of the magazine, which is that lean-back editorial experience. You’re not always looking for that with digital,” Walsh says. “I think Fifty Grande fits well on the coffee table and I’ve heard from a lot of people they go back to it over and over for inspiration. I like that as our place — something that people pick up again and again to be entertained in some way or for inspiration or for planning purposes.” 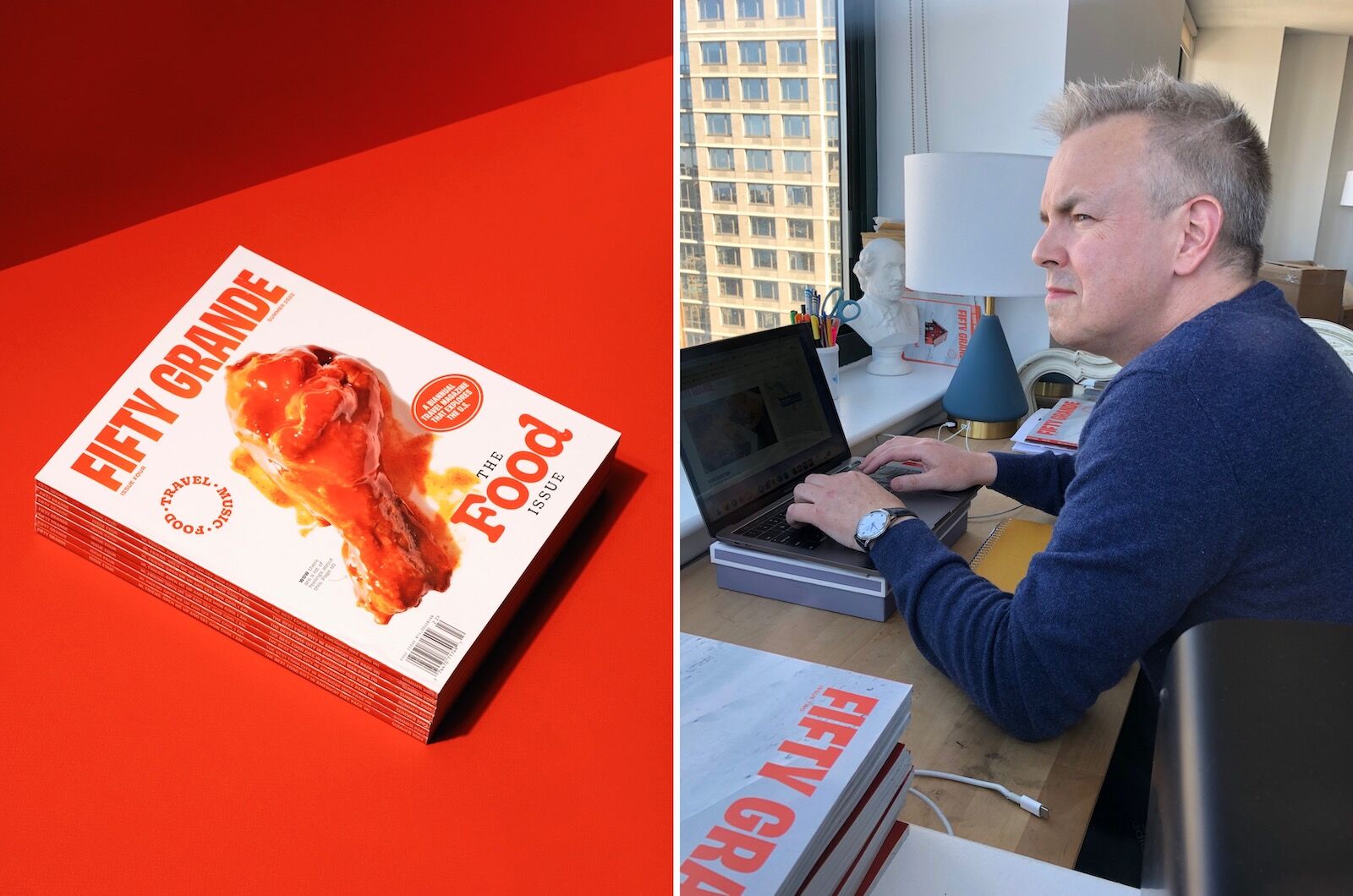 We caught up with Walsh to learn more about why now is a good time for a food issue and some of the surprising things he found while putting together the magazine.

Matador Network: Why is now a good time to do a food issue?

Chris Walsh: We always knew we’d do issues devoted to food and music in the first handful that we published, since they are pillars of our editorial. But I also think it’s a really exciting time in dining and food in this country. Especially if you’re interested in finding cool, notable food experiences near you and you can’t go to New York or San Francisco or New Orleans or any of the other great food meccas here. So many of the mid-sized American cities have upped their game over the past twenty years. Diners now have a lot more options — more cities to go to and more places in those cities — making these notable food experiences accessible to more people.

What do you think is the most exciting city or region to eat in the U.S. right now and why?

The mid-sized markets in places you wouldn’t necessarily think of right away. For the issue I talked to a couple who quit their day jobs and traveled the country in a RV for five years, painting a series of murals along the way. I asked them the same question and one of them said “every big city has something going on food-wise,” which I think is really true. That’s why I think it’s an exciting time to be looking at food right now. I asked him to pick one city that surprised him and he said Fargo, North Dakota, which surprised me.

But I think every conversation about this country’s best dining cities comes down to a group of five or six, and it’s been like that for a while. You’re always going to be talking about New York, New Orleans, San Francisco, Chicago, LA, and I’d say Vegas should be in that group too. But there are really so many amazing food cities. Travelers have a lot of options.

Has putting together this magazine changed the way you’ll travel or pick somewhere to eat the next time you head out?

One of the things that I’m doing differently is taking notice of seaweed or kelp any time I see it now. It seems like we’ve heard for a while now that seaweed is going to be the next big thing, because of the health benefits and how eco-friendly it is. So we looked at some of the reasons that it hasn’t taken hold yet in the states. And part of what we heard is the distribution and where it’s available. Now I’m noticing when I see it on sale. I live in Manhattan and just realized that a deli I go to once a week carries kelp snacks, but they’re way, way in the back of the store. Which is fitting, I guess, after you read the story.

There are a lot of people out there who travel first and foremost for what they can eat. What do you wish they knew before planning a trip?

That was one of the questions in our survey — have you ever taken a trip solely to experience a place’s food and restaurants? The split was 62 percent yes, 38 percent no. For people in both groups I think it’s worth noting that having great food while traveling doesn’t have to mean expensive. The idea behind Fifty Grande is that travel should be accessible and attainable by everyone, and there are places in every state worth seeing. The same thing can be said about dining.

Have you noticed any trends while putting this together that others should expect to see as they’re making their road trips and visits?

That you can get really good chicken fingers at gas stations if you know where to go, like Oxford, Mississippi.

Can you give us a highlight of some of the things that you’re most excited about in this issue?

Man, there’s a lot. I love this issue. There’s a story about a new generation of Pueblo chefs and artists who are building on the foodways of their ancestors that’s really interesting. The focus of that is in New Mexico. The writer was really thoughtful in his approach and it was done while COVID was raging through the country. But he pulled off some great reporting. He’s a photographer too and the photos that accompany that story are so rich and intimate. You’re right there in the story. I think travelers who are interested in the evolution of dining habits and practices, especially in the southwest, will find that to be a great read.

There are also the usual quirky, funny stories. Like the rebirth of an off-the-wall Denver restaurant called Casa Bonita. The journalist who wrote this is the son of a former Denver restaurant critic and he has a unique, funny perspective to it. The art on that story jumps off the page, too. I love those pages.

One of the fun things we do each issue is ask a bunch of artists and chefs one question. So we have Jean-Philip Grobler (St. Lucia singer), Ben Bridwell (Band of Horses singer), Alex Guarnaschelli (author, chef, host of Food Network’s “Alex vs. America”), Maggie Rose (country music singer), Natasha Leggero and Ludo Lefebvre (hosts of TBS’ “Rat in the Kitchen”), Kristen Kish (chef and Bravo’s “Iron Chef,” Travel Channel’s “36 Hours”) and others sharing their favorite American food cities. We did a Q&A with celeb chef Chris Cosentino about his Houston restaurant Rosalie, which is in the Baldwin Hotel. And we did a round-up of the coolest hotels coming this year, and a bunch of other stuff.

I wanted a story about Mississippi or Alabama in this issue because our coverage to this point has been really limited. So we took a look at the role that gas stations play in Mississippi’s dining scene, especially in dining deserts there. Photos lead the story in that piece, so it puts you right into these places very quickly. I was skeptical about this whole idea, but the writer was adamant this is a trend there and you can get a “good meal,” which were her words, at a gas station. So, I wanted to know what dining at these places looked like. It’s not like eating at the pump at an Exxon station, but maybe akin to a bodega-deli in New York City, if that makes sense to people.

You launched at a rough time for publishing and for travel. What have been some of the biggest surprises that you’ve found?

Yes, that’s putting it very diplomatically. Our first issue was in January 2020, the second one late 2020. It wasn’t the best time to launch a travel magazine, especially if you’re concerned with reporting and inspiring people to go explore new places. I’m generally a look-at-the-positive side guy, so the flip side of that was, it seemed like people were trying to escape during 2020, and part of that for travelers meant dreaming about travel from home. And I’ve genuinely been surprised at how supportive customers can be. I get really nice, unsolicited emails and messages from people way more often than I expected. I’ve also been pleasantly surprised at how many issues we’ve sold in stores. Like everyone, I’ve read my fair share of stories about struggling retail sales and I didn’t expect much to happen in stores. But, the majority of our sales have been newsstands and wholesalers.

What’s the best way for people to get their hands on a copy of the magazine and keep up with all that you’re doing?

They can check us out on FiftyGrande.com or we’re in bookstores nationwide like leading indie bookstores, Barnes & Noble, Whole Foods, Books a Million, and others. Also, a tip if you want to try the magazine: if you sign up for the newsletter you’ll receive a 50 percent off discount, good for any purchase in our store. So you can grab an issue or a subscription for 50 percent off just by signing up for the newsletter.