There are many types of tequilas out there made by a wide range of producers. There is only one, however, that’s made with a turkey breast suspended in the still: Maestro Dobel’s Pavito.

Using turkey, chicken, or another meat during distillation is traditionally only done with mezcals. The resulting spirits are called pechuga, which translates to breast in Spanish. Maestro Dobel, which is known for its cristalino tequila, released the world’s first pechuga tequila in September 2021 with a suggested retail price of about $60. Even for people well versed in agave spirits, Pavito is unlike any tequila you’ve tried before.

Production starts with Maestro Dobel’s double-pot-distilled Silver tequila that’s made using 100 percent Blue Weber agave sourced from a single estate. A proprietary mix of fruits and spices including mango, guayaba, tejocote (Mexican hawthorne), cinnamon, and others are then briefly macerated before the spirit is distilled for a third time. Then the distillers attach the pechuga to the top of the still for the final distillation. The vapors heat and pass over the raw turkey, cooking the meat while also bringing the tequila, fruit, spices, and meat flavors together into the final spirit.

It is, described in the most basic way, a complex flavored tequila made similarly to a vapor-distilled gin. Only, gins don’t typically have animal proteins thrown into the mix. Pavito has a strong anise aroma with hints of sugarcane and cinnamon that don’t overpower the agave backbone. The initial flavor is anise-forward as well, along with a minty tropical fruit vibe with a subtle savory quality. Don’t expect it to taste like Thanksgiving dinner — the meat adds more body to the liquor than it does flavor.

Though this is the first commercial pechuga tequila, Maestro Dobel is building off of well established traditions. The practice can be traced back to mezcal, a spirit made in central and southern Mexico using a number of different types of agave (tequila, in fact, is a type of mezcal). It’s not exactly clear when the first mezcal de pechuga was made. Some sources claim the distillation method goes back at least a century, while others believe it only dates to the 1940s.

Del Maguey was among the first mezcal brands to bring mezcal de pechuga to the States. It doesn’t come cheap at about $200 a bottle. Other mezcal brands have followed suit over the past decade, and each has its own mix of fruits and herbs. Even the meat can vary — chicken and turkey are the most common, but some producers have used rabbit, pork, or venison.

Mezcal de pechuga is often made when the seasonal and regional fruits and herbs are ready to harvest in the fall, and the spirit itself is usually reserved for special occasions or holidays. It should be sipped neat to fully appreciate the flavors, as putting it in a cocktail would only mask the ingredients that make pechuga spirits special (though if you must mix it, Maestro Dobel suggests a splash of sparkling water and pineapple juice). By bringing these mezcal traditions to the most famous agave spirit, Maestro Dobel is opening up the pechuga concept to a wider base in the United States at an affordable price point.

I caught up with Alex Coronado, maestro tequilero and head of production at Maestro Dobel, for more insight into the first tequila de pechuga and what makes Pavito special. 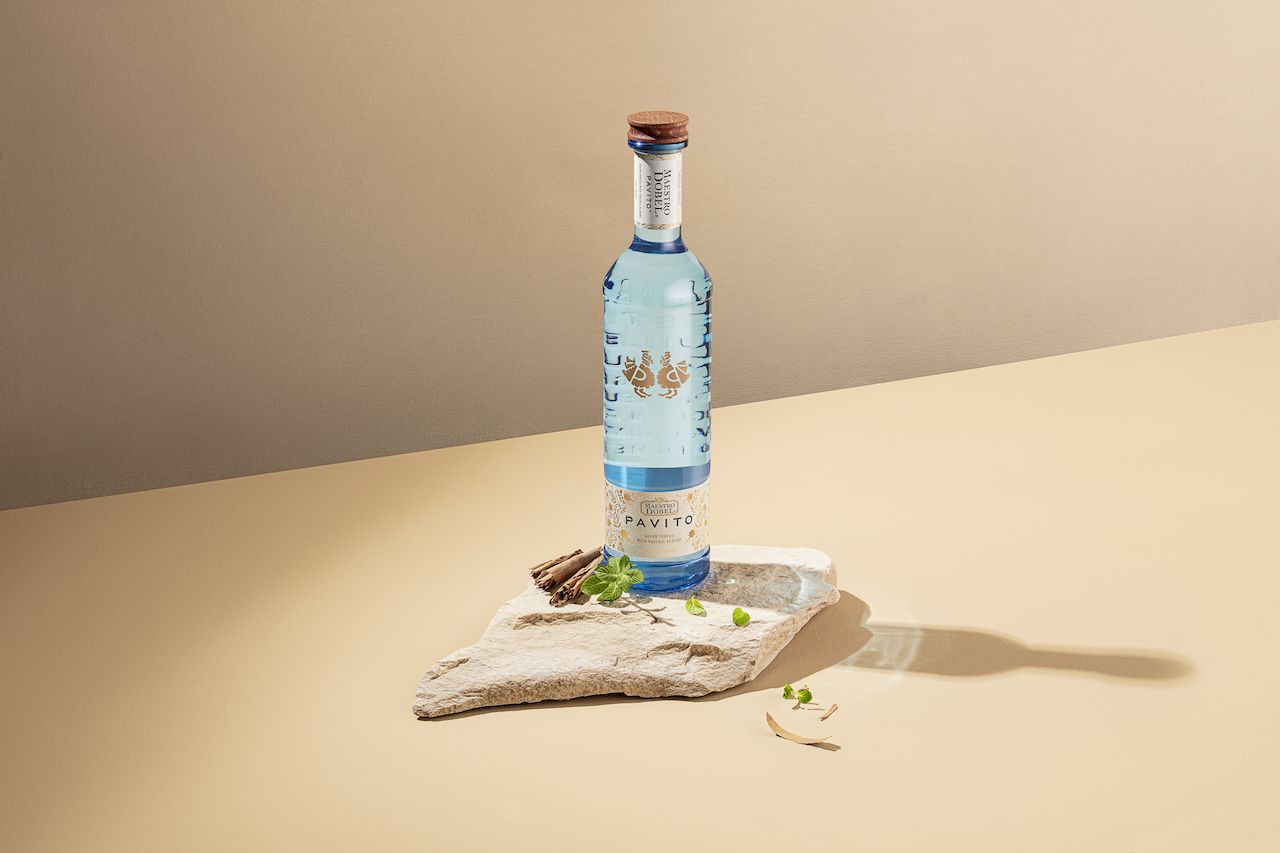 Why do you think there hasn’t been a pechuga tequila made before?

The use of pechuga has only been used in other agave distillates, making Maestro Dobel Pavito a revolutionary addition to the tequila category. Maestro Dobel spent years perfecting how to bring this innovation to life; the process itself is extremely labor-intensive and requires a third distillation. The third distillation of Dobel’s silver tequila, unique to Maestro Dobel, intensifies the tequila, resulting in a smooth, yet complex final product with layers of rich, savory notes.
​​
Can you give me any insight into the seasonal fruits and spices that are used?

Pavito uses a combination of multiple local Mexican fruits such as pineapple, apple, mango, guayaba and banana alongside traditional herbs and spices including sugar cane, cinnamon, and tejocote, a Mexican aromatic, evoking the spirit and tradition of the holiday season.

Can you describe how the pechuga influences the taste while suspended above the still?

The pechuga is placed at the inside top of the still, infusing the tequila vapors with the aromatics of the fruits, spices and savory turkey breast. Therefore, the slight smoky notes in the resulting liquid come from a third distillation with turkey breast, intensifying the tequila and creating layers of complexity. Shining through are notes of cooked agave, fruits and spices, while also achieving a rich, savory profile.

What was the inspiration behind using a method traditionally reserved for mezcal?

Maestro Dobel Pavito draws inspiration from centuries-old, ancestral Mexican agave distilling techniques and traditions. The ancestral recipe including pechuga was used before spirits were placed into categories and names were coined such as “tequila” or “mezcal.” While it is true that pechuga is more commonly found in mezcal, it has not always been limited to the category.

Do you think pechuga tequilas are something that could catch on with other producers? Why or why not?

Yes, pechuga tequilas are something that could catch on with other producers. The tequila category overall has shown impressive growth over the last year, with consumers increasingly interested in purchasing as well as trying new premium and ultra-premium tequilas. However, the process of creating Maestro Dobel Pavito is extremely labor intensive and took years to perfect the recipe. The final product is a smooth, yet complex liquid with layers of rich, savory notes.

What’s done with the turkey breast after distillation?

The lovely, cooked turkey breast is given to the distillers to enjoy after the process has been completed, creating no waste!