Few countries are as vegan-friendly as Israel. More than five percent of residents are vegan, according to Forward. Tel Aviv alone has more than 400 restaurants with vegan options. Even the military has a strong vegan connection: One in 18 Israeli soldiers is vegan, making it the most vegan army in the world.

The food industry publication Chef’s Pencil ranked Israel at number three on its list of the most popular countries for vegans in 2020. According to the publication, one of the reasons people in the country have long paid attention to diet is because of Kosher dietary laws, called kashrut, which requires meat and dairy to be separate (fish, or pareve, fall into another category).

“Vegetarian and vegan dishes are an absolutely integral part of Israeli cuisine,” says Ellen Shapiro, the North America PR director for the Israel Ministry of Tourism. “Much in the way coastal Japanese cuisine includes fish at breakfast, Israeli meals always include numerous vegetarian and vegan options.”

Shapiro cites the abundance of fresh fruits and vegetables as one reason Israel is a dream destination for vegetarians and vegans. Even meat-centric restaurants, she says, start the meal with vegetarian and vegan appetizers brought to the table as soon as you sit down.

“When I was a vegetarian living in Israel many years ago, being veg was less of a regular practice globally,” Shapiro says. “But even then I found I could always find something delicious, fresh, and nutritious to eat whether I was in Tel Aviv, Jerusalem, or Haifa — or a little further afield in the Negev Desert or up north in the Galilee (where much of the produce is grown). Now, so many more people are choosing a vegetarian or vegan lifestyle, and Israel seems to be leading the way with both the number of restaurants offering creative plant-based dishes and chefs who are constantly pushing boundaries to create new and elaborate dishes.”

For vegan travelers — or anyone who is looking to sample why a vegan diet is so popular in Israel — these are the dishes you don’t want to miss. 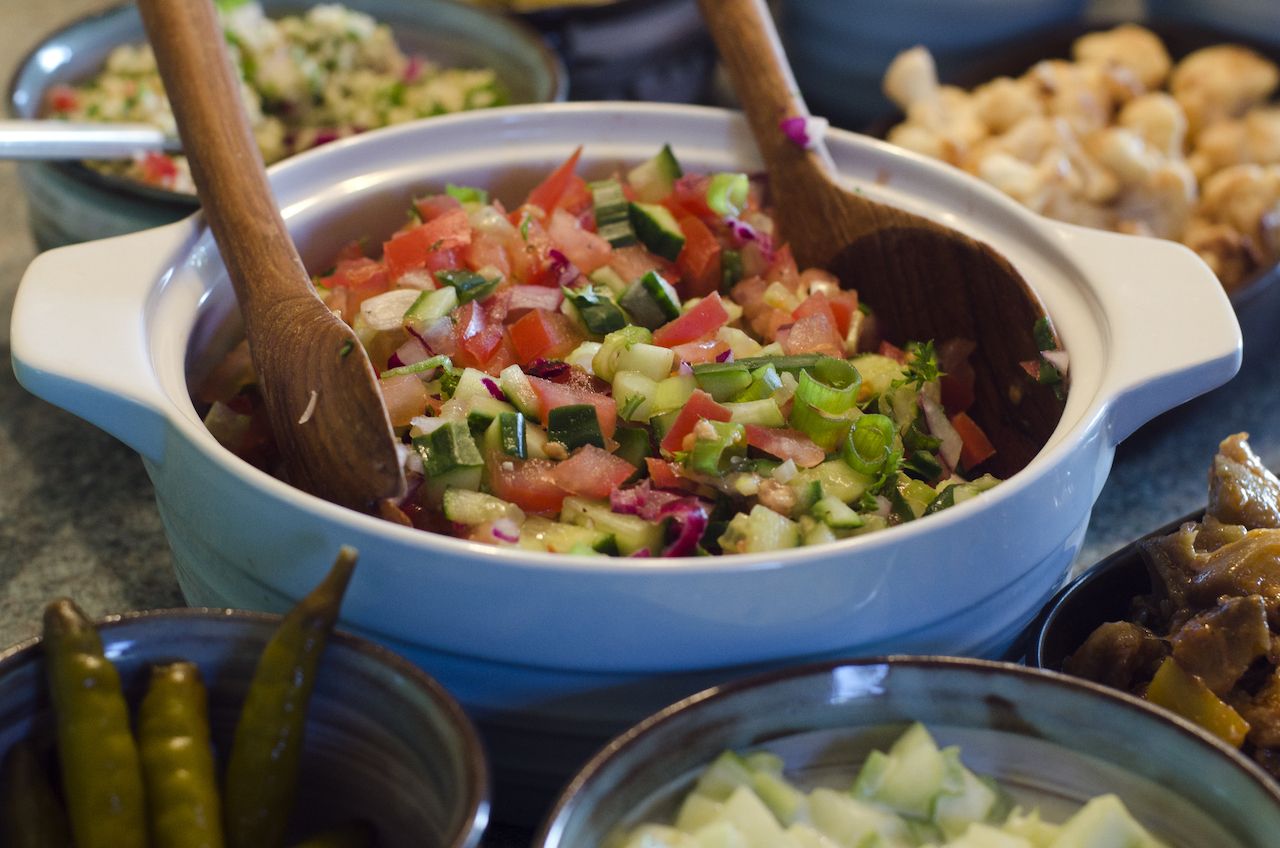 Salads are a big part of Israeli cuisine. Israeli salad is similar to other fresh and raw ingredient salads found around the Mediterranean. It’s made of chopped tomatoes, onions, cucumbers, and bell peppers, along with a mix of spices that vary depending on who is making the salad. As Israeli journalist Gil Hovav told the BBC, Israeli salad has Arabic roots just as other dishes like hummus and falafel do.

Israeli salad can be found at restaurants and in homes all over the country, as well as stuffed into a pita. 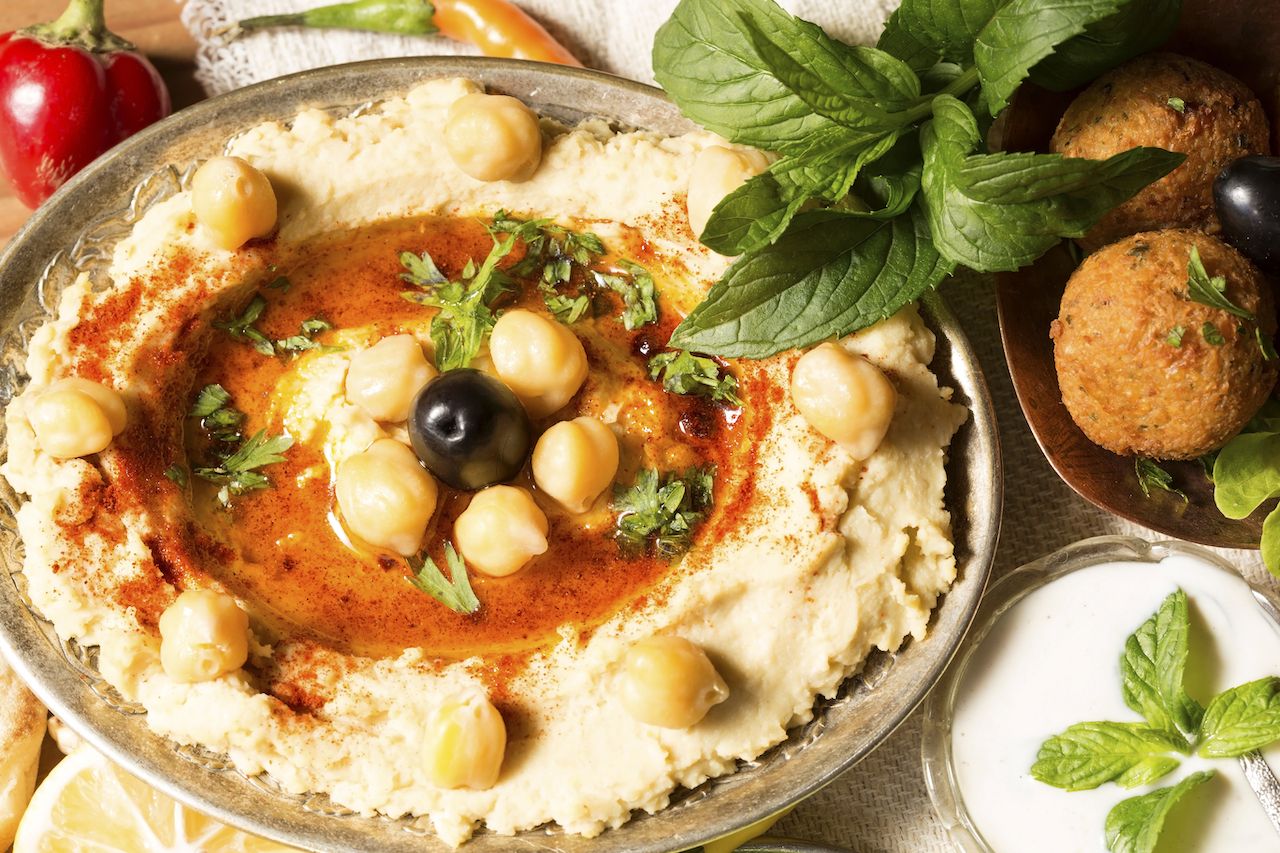 Hummus is as widely consumed as its proper origins are debated. Case in point: the “Hummus Wars,” which, as NPR describes, was the fight to recognize Lebanon as the origin of hummus. The Hummus Wars ended unresolved, with multiple countries in the region laying claim to the food. And for good reason, considering it’s hard to pin down exactly when hummus was created. The name, after all, simply means “chickpea” in Arabic, and the dip as we know it is hummus b’tahini (hummus with tahini).

Regardless of the origin, hummus made with chickpeas, tahini, olive oil, lemon, and garlic is a popular dip served alongside cucumbers, carrots, pita, and other vegetables around Israel. 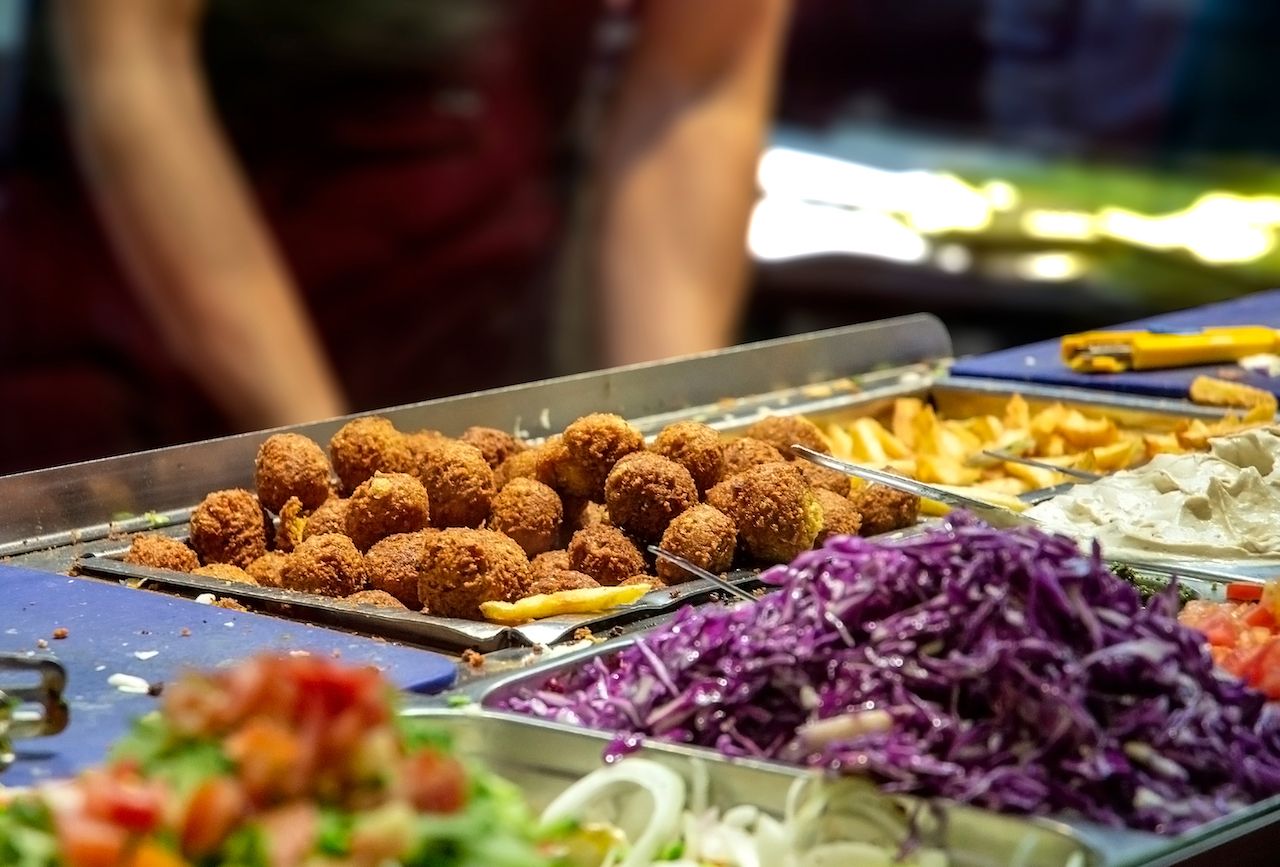 Hummus isn’t the only chickpea-based food found around Israel. Falafel is a ball of ground chickpeas spiced with ingredients like cumin, coriander, pepper, and chili powder. The ball of spiced chickpea is then deep fried.

Falafel is popular throughout Egypt and the Middle East. In Israel, it’s widely considered the national dish and is commonly eaten as a sandwich with pita, along with hummus and Israeli salad. 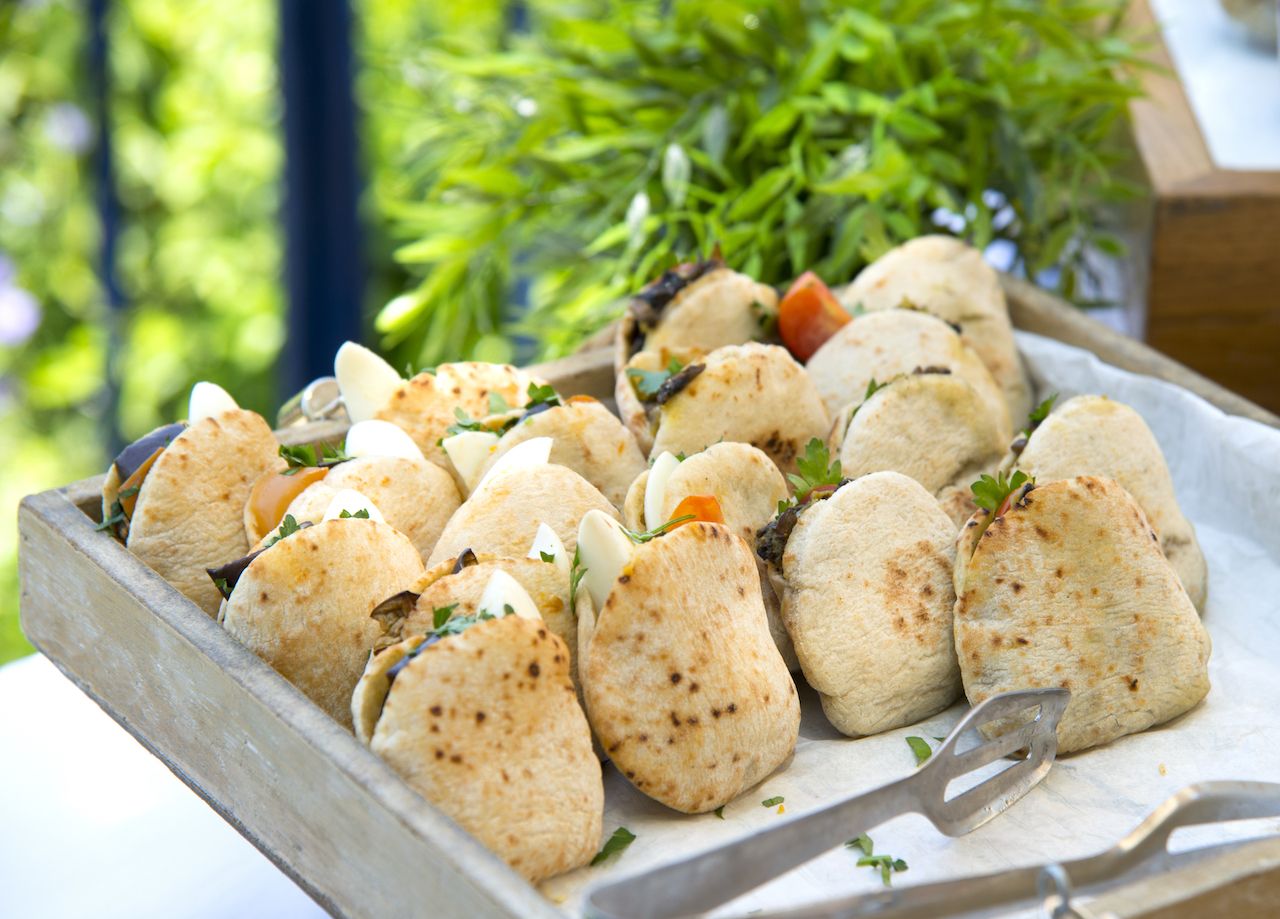 This pita sandwich is easy to eat on the go, and it’s a classic Israeli food eaten for lunch or as a snack. It’s made with fried eggplant, pickles, potatoes, parsley, hummus, Israeli salad, and tahini. It also commonly incorporates hard-boiled eggs, which can be removed for vegans. All of the ingredients are then stuffed into a pita to make a sandwich.

The sabich is believed to have been created by Iraqi immigrants who owned a small food stall in Ramat Gan. It’s the perfect example of how wrapping your favorite foods in pita is sometimes the best way to enjoy everything all at once. 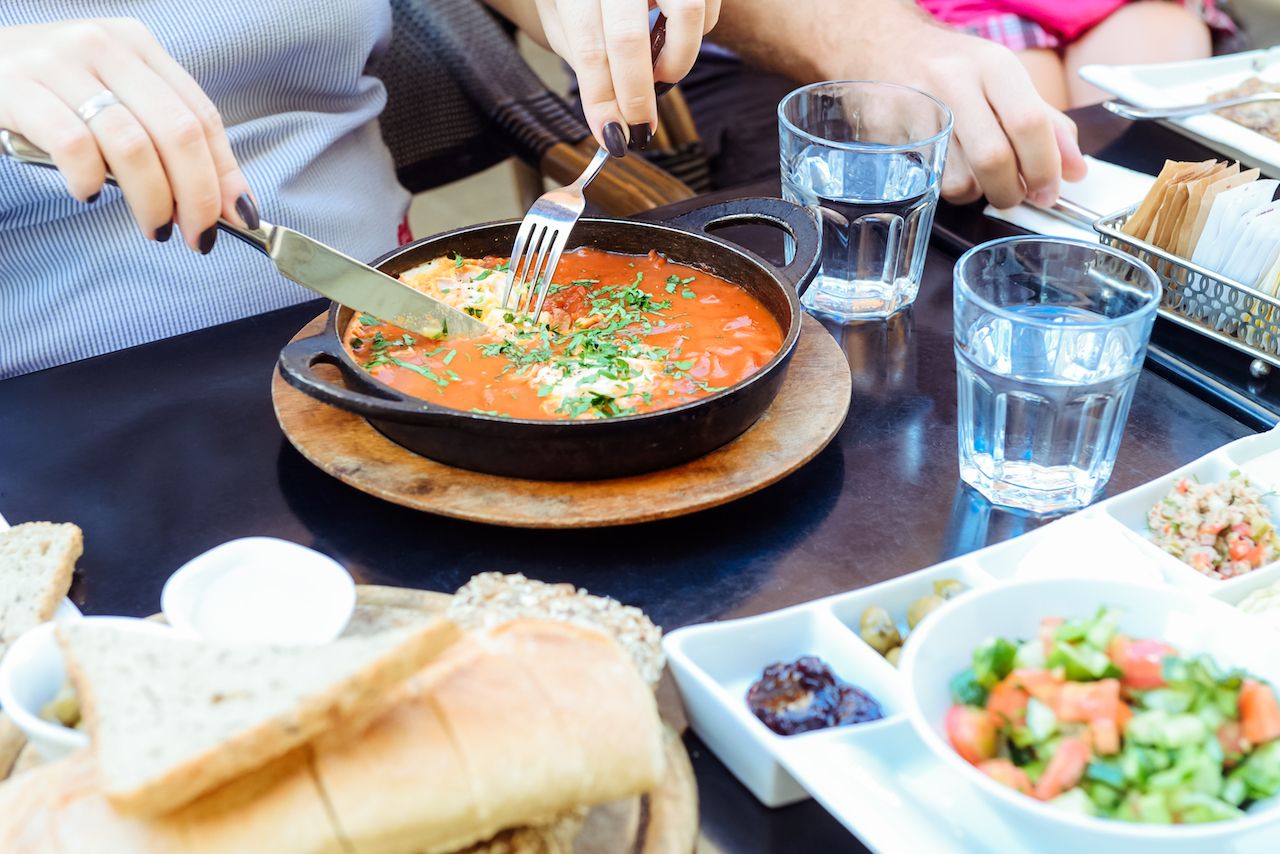 If there’s one dish that can rival falafel when it comes to classic Israeli food, Sala Levin writes in Moment, it’s shakshuka. Shakshuka is made with tomatoes, peppers, chickpeas, onions, garlic, and cumin. Shakshuka is usually topped with eggs, but can be left out to make the dish vegan. All of the ingredients are stewed together and served alongside bread or pita.

Shakshuka originally comes from North Africa. People in the Ottoman Empire, which spanned from Eastern Europe through the Middle East and North Africa at its peak, had a stew called saksuka made with vegetables and meat. North African Jews took the meat out, Levin writes, to make the dish pareve. Today, there are variations that incorporate a myriad of different spices and vegetables, depending on the preferences of the cook.

CultureFrom Markets To the Masada, These Are the Most Exciting Experiences in Israel
Tagged
Vegetarian Israel
What did you think of this story?
Meh
Good
Awesome

The Truth About Artificial Vanilla Extract (and Why You Should Always Splurge for Pure)
These 7 Cannabis-Fueled Restaurants Will Take You To New Highs in the Most Delicious Way
7 Literary Pubs Where You Can Drink Like Your Favorite Authors
Houston’s Sugar Land Suburb Is One of the Most Diverse, and Exciting, Places To Eat in Texas
These Boston Food Tours Showcase America’s Most Underrated Food City

8 American Habits I Lost When I Moved To Israel

16 Differences Between a Normal Friend and an Israeli Friend

11 Things I Wish I Knew Before Moving To Tel Aviv

9+ of the Most Peculiar Spots in Israel

10+ Must See Spots in Tel Aviv