Anyone who lived in the Mile High City prior to the past decade knows that Denver wasn’t always thought of as “cool,” at least not beyond the lore of John Elway, Jack Kerouac, and Big Head Todd. This is no longer the case. Buoyed by recreational marijuana sales and easy access to the outdoors, Denver’s streets now run with lattes, and the pubs stock locally made spirits. Take the A-Line into downtown from Denver International Airport and you’re bound to hear no fewer than four languages spoken. But nothing signifies Denver’s emergence as an international destination more than the triumph of the food hall.

“Part of the reason that markets are blowing up is that cities, and especially industrial parts, declined for so long,” Justin Croft, vice president of development at Zeppelin Development, says. The company is behind two of Denver’s most prominent food halls, The Source and Zeppelin Station. “Developers are coming in and kind of building cities and neighborhoods from scratch, one big move at a time, in an effort to create compelling places for people to go.”

For Zeppelin and other developers, Denver is the perfect landscape for these spaces. Much of the area that now makes up the trendy neighborhoods of RiNo and LoDo — home to both of Zeppelin’s food hall developments, among others — was formerly industrial warehouse space that largely sat vacant until Coors Field was built for Major League Baseball’s Colorado Rockies in the 1990s.

“The reason market halls are happening is because there are interesting, independent brands with people who have devoted their lives to that endeavor,” Croft says. “Twenty years ago, that just wasn’t the case because cities were filled with chain restaurants in their core, making it extremely difficult for local entrepreneurs to find their way to a storefront. Market halls really make it possible for mom and pop businesses to come together with their limited budgets and operational capacity and draw people in to enjoy them together.”

And come together they have. These are Denver’s eight best food halls right now.

1. The Source in RiNO 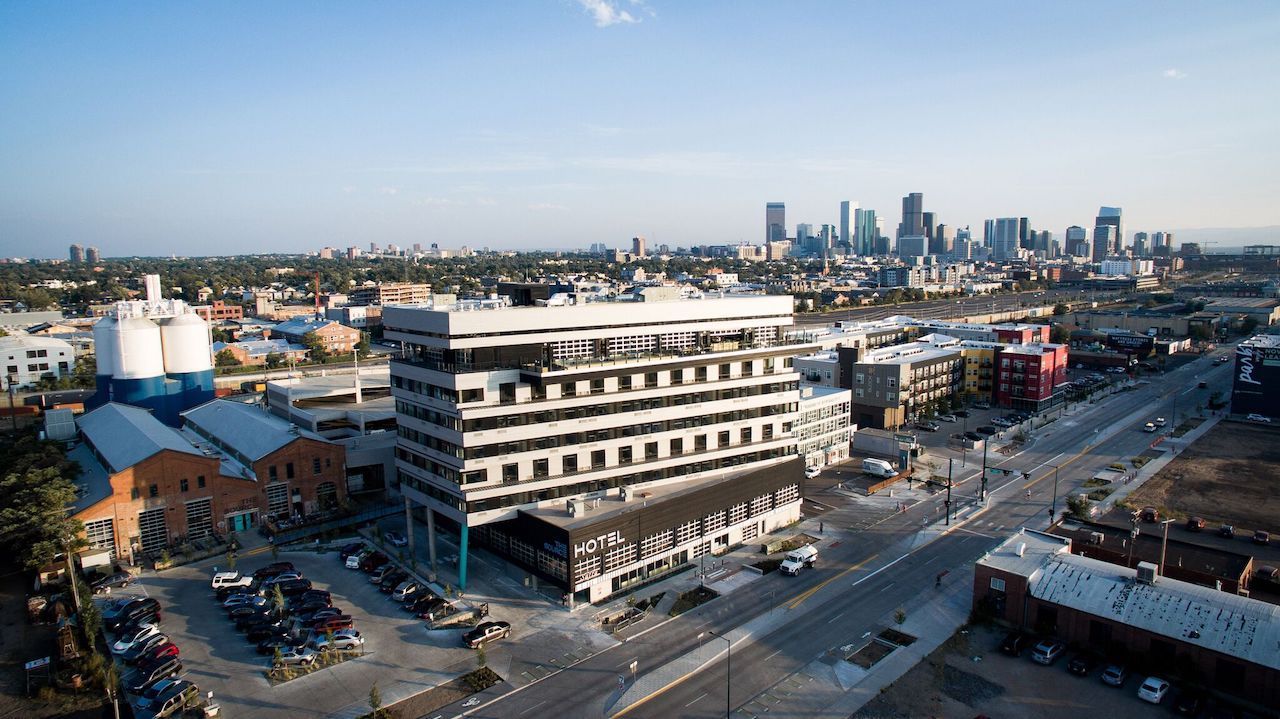 The Source opened in 2013 as Denver’s first full-scale food hall. In addition to staples like a butcher, a barber, and a brewery, you’ll find locally renowned restaurants like Acorn from chef Ian Palazzola and the innovative Israeli restaurant and market Safta. There’s also a central bar called Bar Isabel, a liquor store, and The Source Hotel. 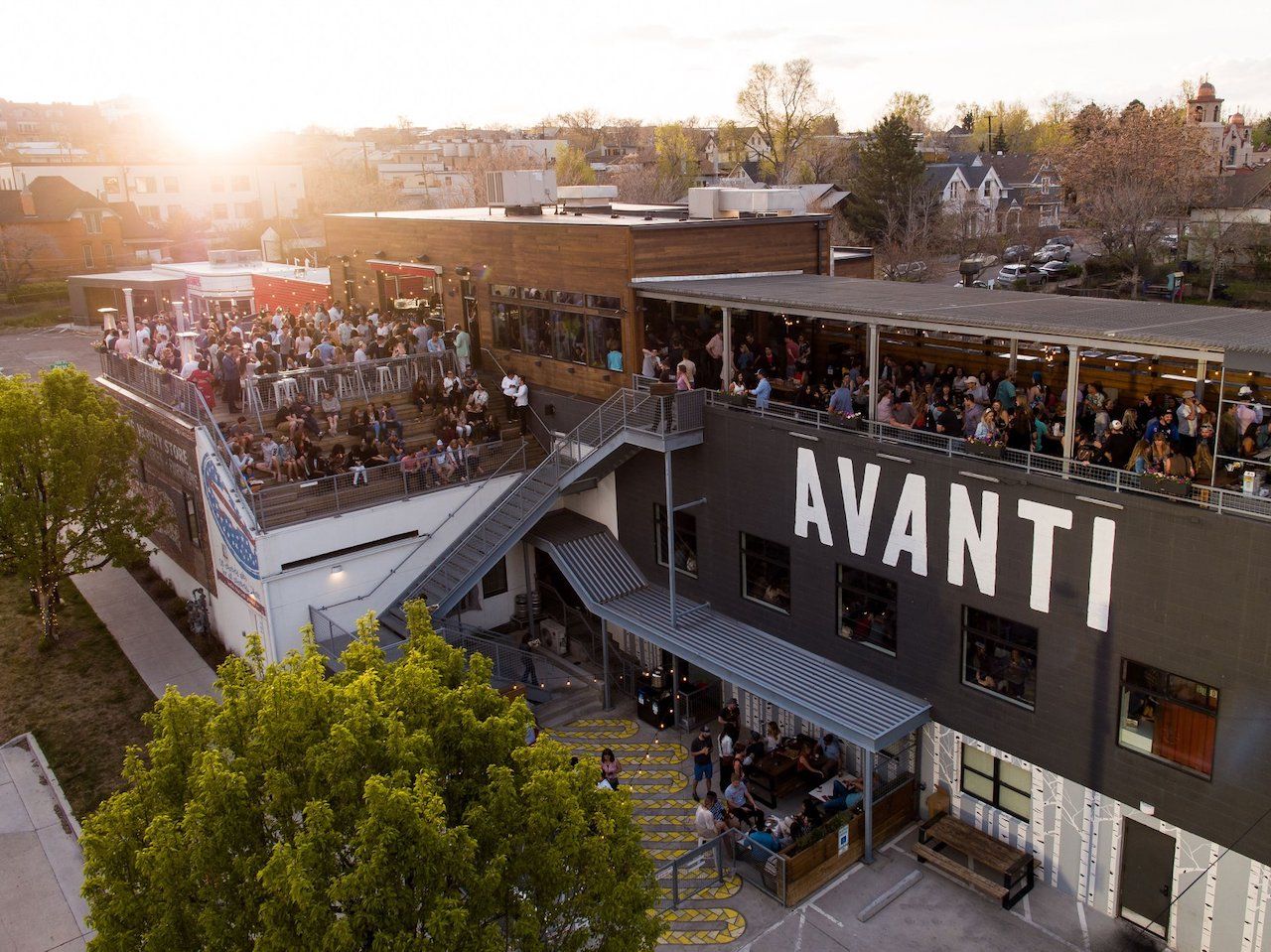 In 2015, Avanti F+B bought a collection of shipping containers, renovated them, and arranged them into a massive two-floored warehouse with a patio overlooking downtown. The building is mostly populated by a rotating cast of chefs and restaurateurs trying out a new concept before bringing it to the brick-and-mortar market. If you want to learn about the dishes that will define the coming year in Denver’s restaurant scene, this is the place to try them. Stop by the bar to grab a cocktail as you enter, meander through the eight or so restaurant offerings until one catches your fancy, and, finally, find a seat outside overlooking the Platte River. 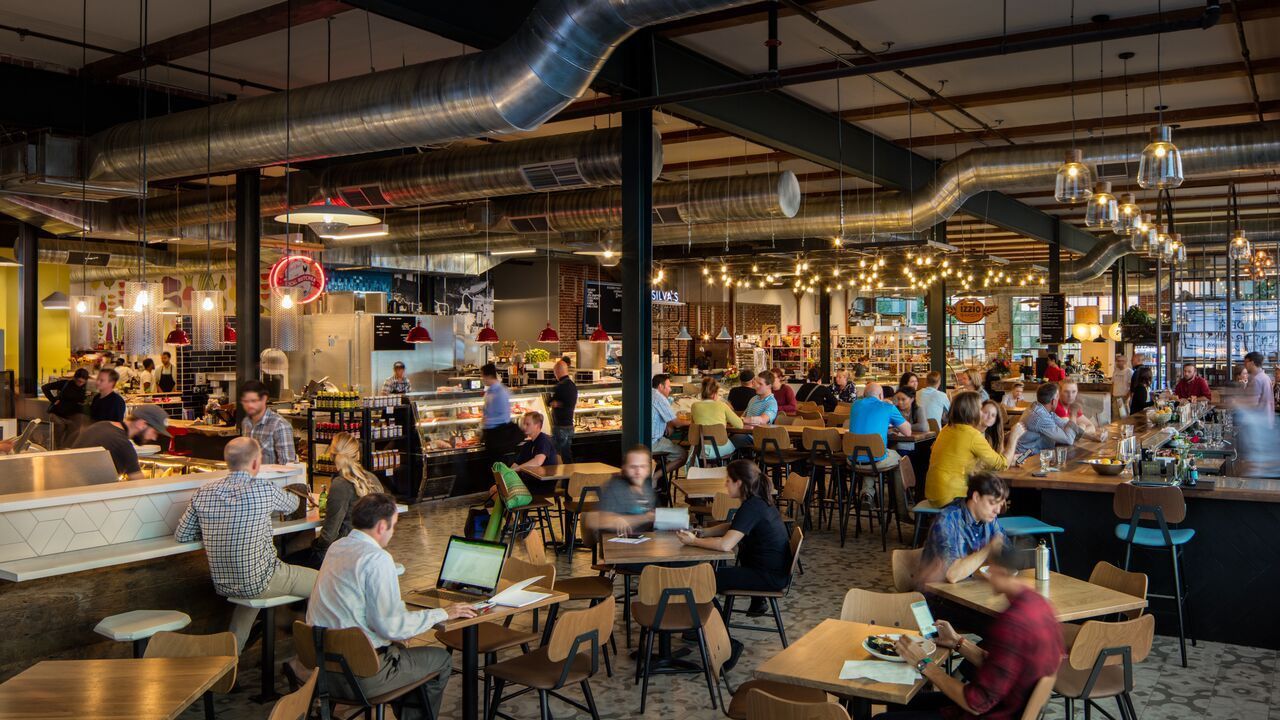 Denver Central Market is the local incarnation of the European-style urban market. Basically, it’s everything the big-box specialty grocery stores try so hard to be but never actually pull off. In the grand hall you’ll find a butcher, an artisan bakery, specialty shops, and several deli counters serving the food that lured you from Larimer Street in the first place. A second outpost of Denver Central Market opened inside the airport in late 2018 — in case you missed the flagship while in town. 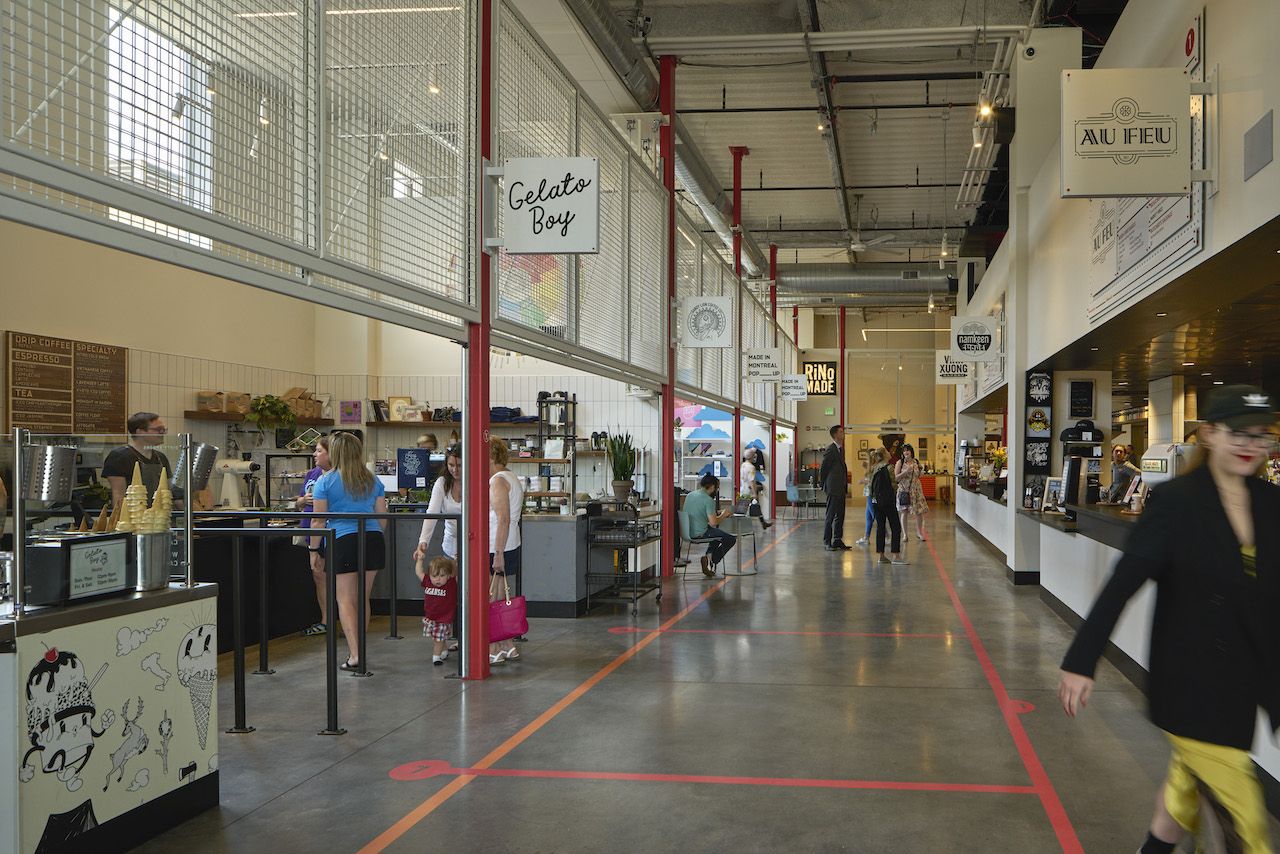 Named after the blimp, not the band, Zeppelin Station is the embodiment of what we meant by “international destination” above. Here, you’ll find Denver’s best banh mi at Vinh Xuong and the city’s only location of Nashville Hot Chicken chain The Budlong. Grab a meal and sit down at the bar on the main level to pair with a cocktail or glass of wine. 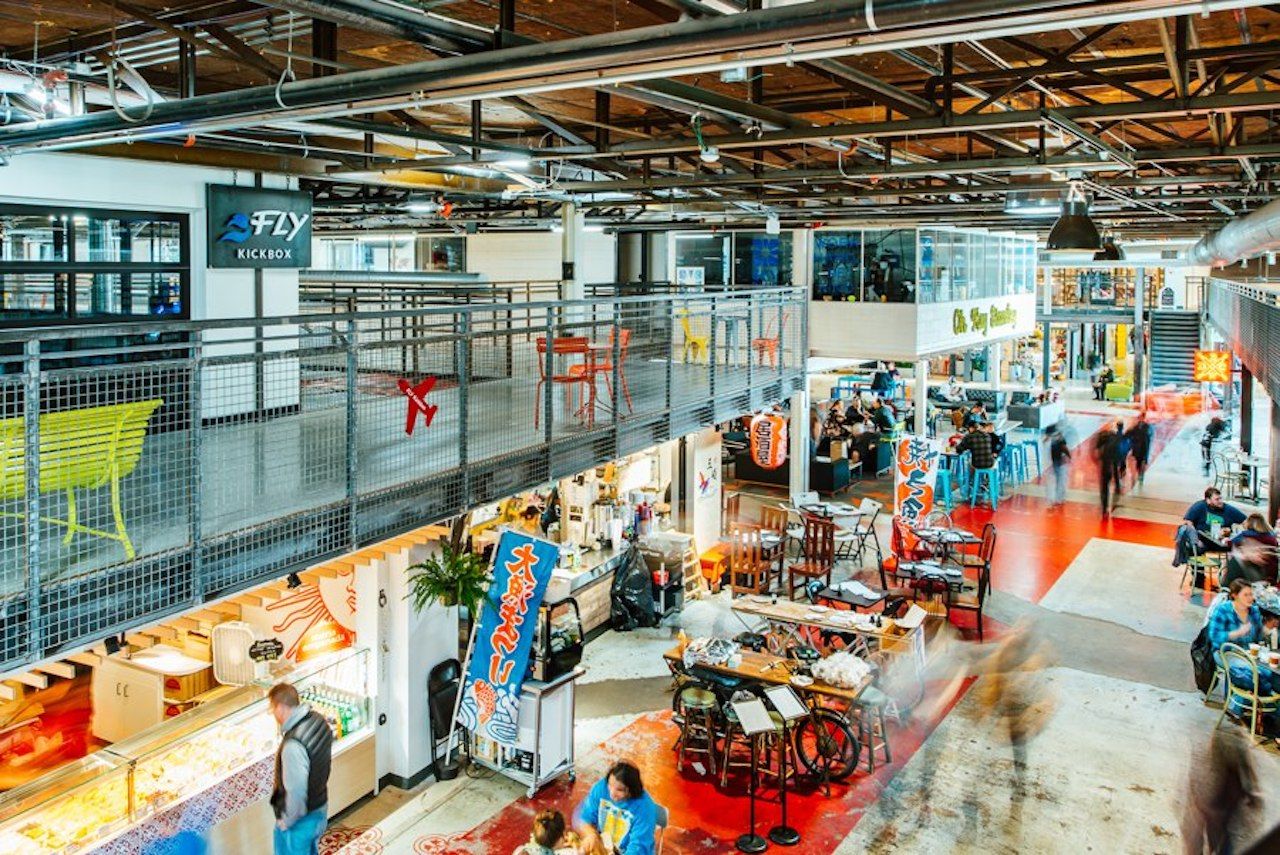 The Stanley Marketplace is what happens when the generally understood idea of a suburban mall is re-thought to be an inclusive destination that’s actually a fun place to hang out at for people over the age of 17. Located in Aurora near the Anschutz Medical Campus, Stanley Marketplace has everything from a zero-waste store to a coworking space to a Japanese restaurant that flies fish in daily from California and Japan. 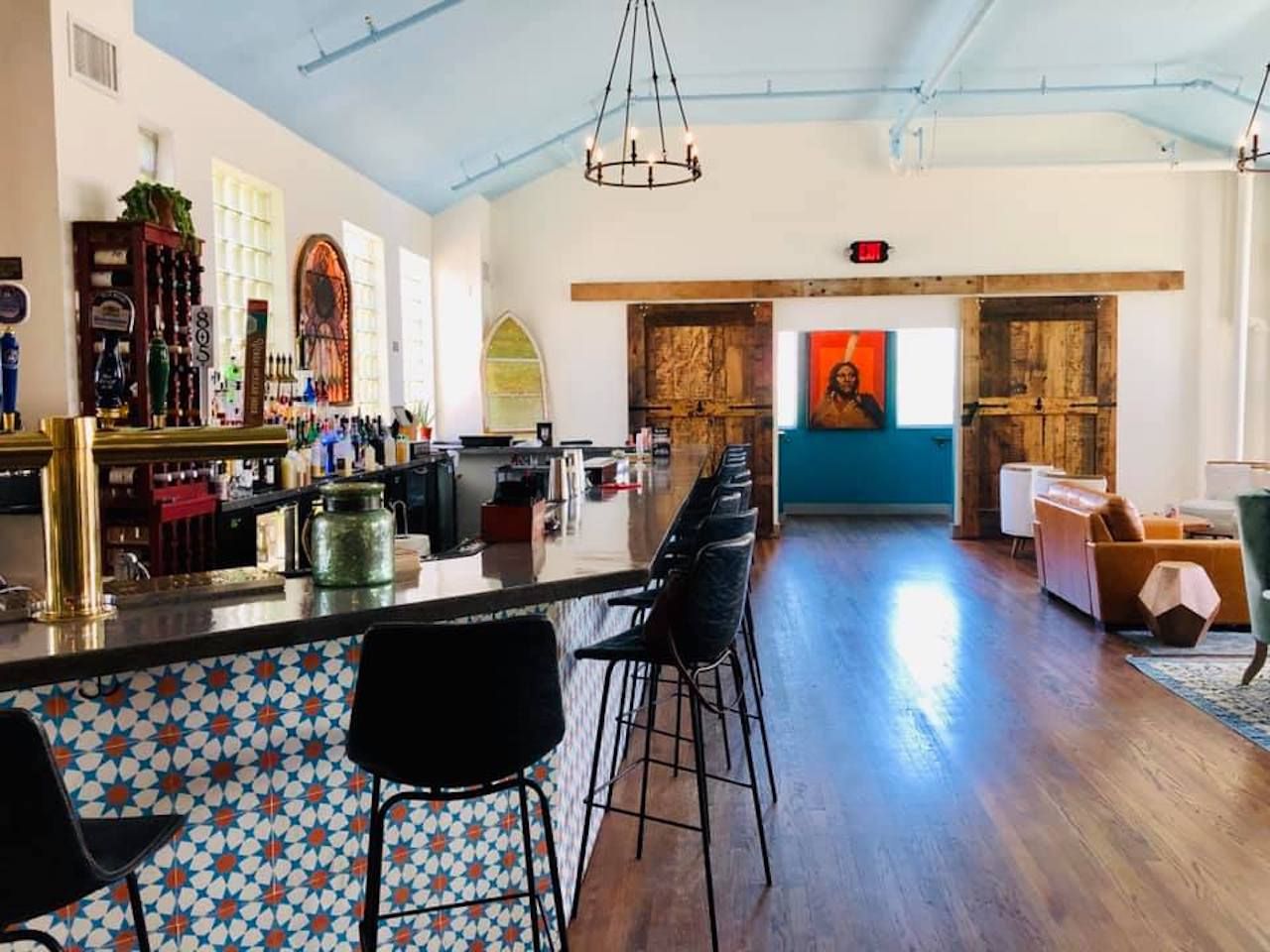 Until about 20 years ago, Castle Rock was separated from metro Denver by a small but mighty stretch of open prairie south of Highlands Ranch along Interstate 25. Due to the state’s complete inability to curb suburban sprawl along the front range, it’s now as much a part of the metro area as Littleton or Englewood. Ecclesia Market stands as a beacon of hope among the endless stream of box houses and strip malls, a decidedly anti-streamline approach headlined by a former church that has been converted into a cocktail bar called Sinners & Saints. 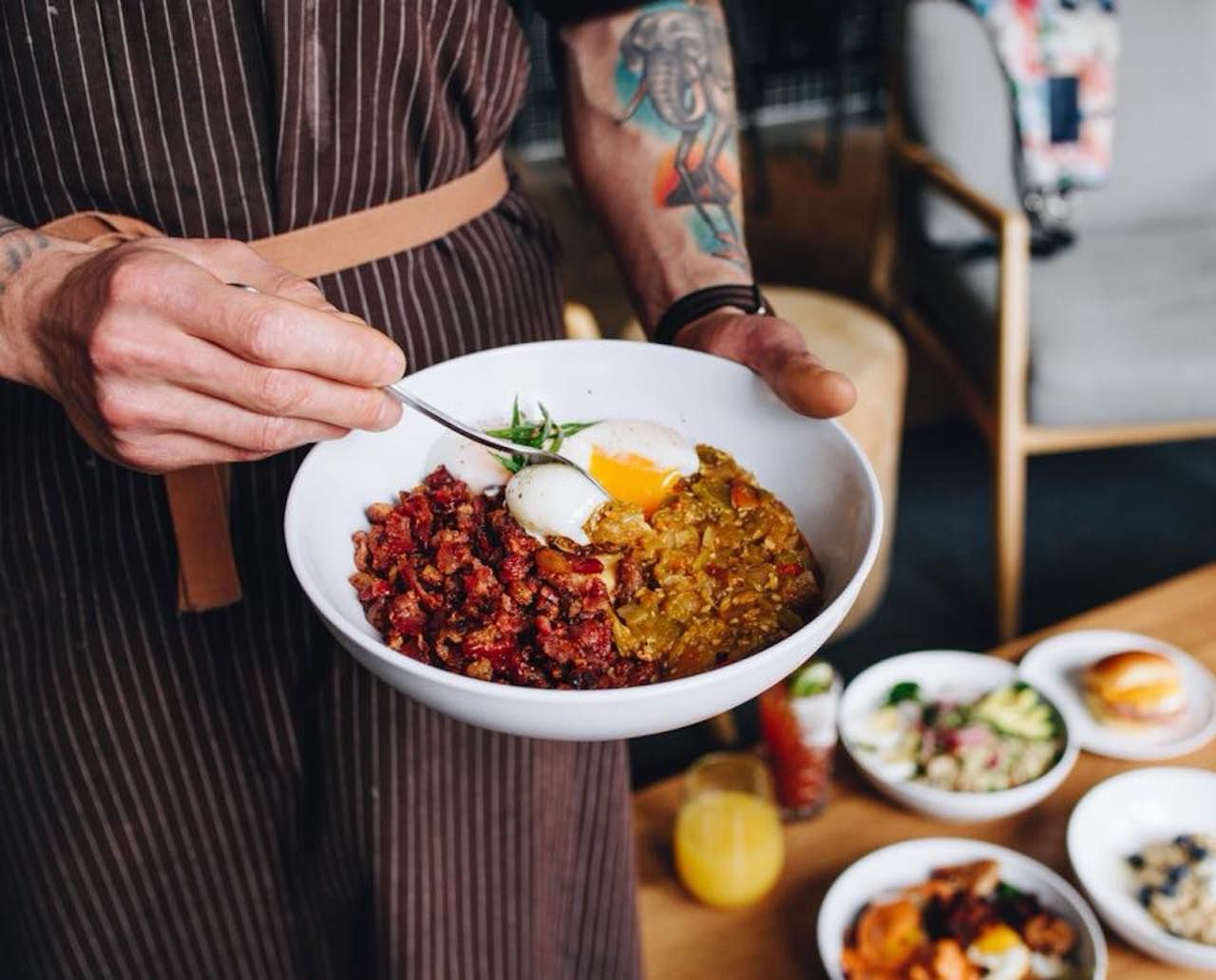 A newer concept, Broadway Market is located just south of downtown along a stretch of Broadway that has been home to just about every incarnation of “hip” that Denver has attempted. Its modern approach to food hall presentation allows you to dine and shop at multiple spots on one tab, including a pour-your-own beer station, so you can be as sporadic and impulsive as you want. This is the place to pregame before hitting the clubs of the Golden Triangle or live music on south Broadway. 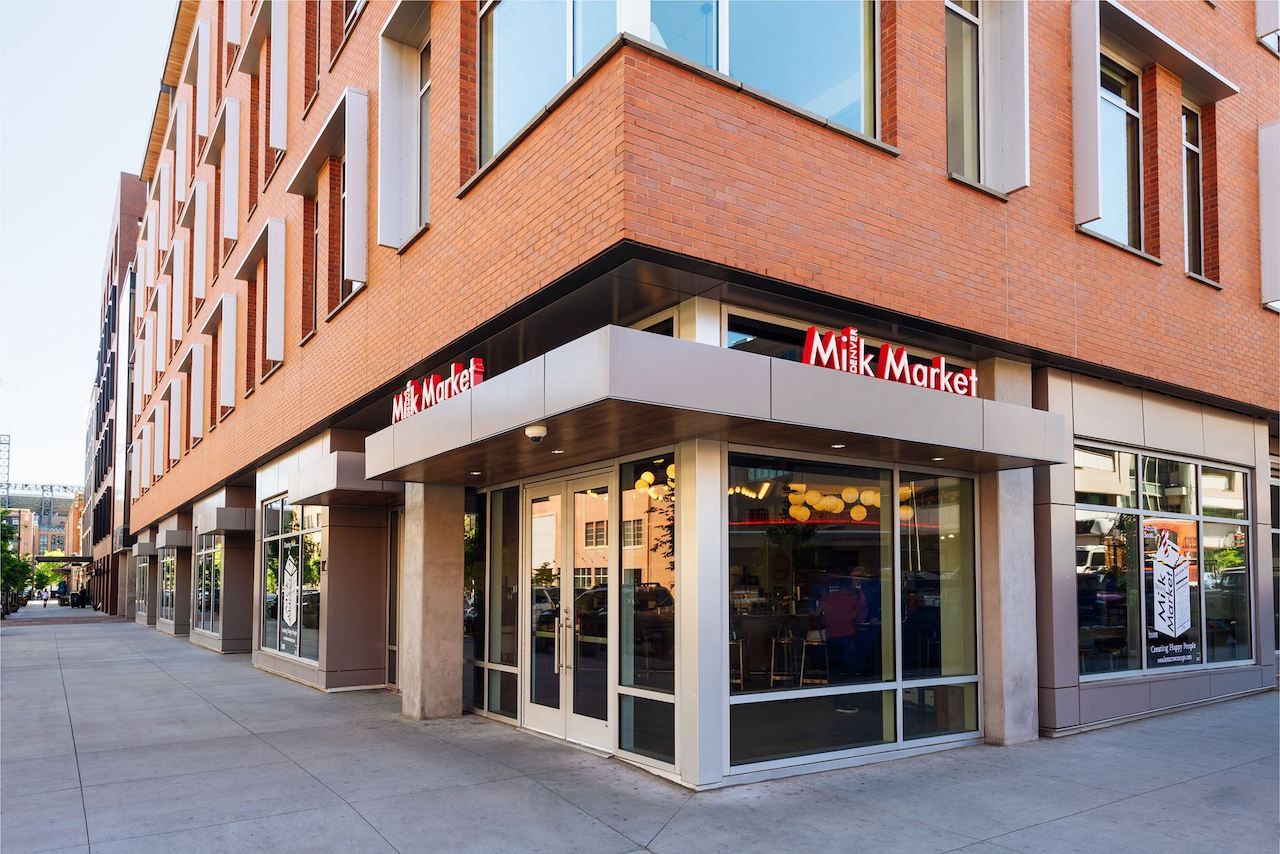 Not limited to milk and milk products, Denver Milk Market gets its name from the legacy of Denver’s Dairy Block (though it is home to a cocktail lounge called Moo Bar). It has 16 permanent resident kitchens that draw influence from around the globe and is the only place in town that can boast that a salad joint is its most unique attraction. The Green Huntsman makes salads that even the heartiest of carb-lovers will crave.