The Loire Valley is the epitome of romantic France. It is a region most famous for its opulent French royal châteaux, its rich diet of Renaissance art, photogenic cities with manicured gardens, bucolic natural landscapes, and exceptional food and wine.

The area once known as the Valley of Kings was favored by French monarchs and the noble families who sought to remain close to them. The sheer number of castles and country houses that are somewhat crammed into the valley — albeit beautifully so — is astounding. The region is so full of elegant architecture and regal history that it can feel a tad overwhelming, and, now that it is no longer a playground for the few, you’ll find you won’t be alone on the well-trodden Trail des Châteaux, or Trail of Castles. That said, you don’t have to wander too far to find enchanting hamlets, serene woodlands, and hidden waterways that have inspired some of the world’s greatest poets and artists.

For wine lovers, the Loire may not challenge Burgundy or Bordeaux, but for those who live and work there, wine is a way of life — both for business and pleasure. Here you’ll find a food and wine scene of quality and sophistication in both their traditional French cookery and a more modern use of local produce. The cities here match the elegance of Paris but lack the crowds and expense. Each has its own character offering a wealth of impressive architecture, well-tended parks and gardens, world-class museums, and irresistible restaurants.

Beyond the mentioned attributes of the valley, it is the Loire River itself that quite simply, brings life to this part of France. A constant pleasure, the river’s energy seems to change daily but the seasons invite the most dramatic transformation. From golden poplars lining the river banks in autumn to the fresh scent of wisteria and rose in spring, there is never a bad time to visit the waterway; you’ll just have a different experience.

If you’ve ever pondered if leaving Paris and visiting Loire Valley is worth it, it certainly is. Here are a few more reasons why.

How to get to The Loire Valley from Paris 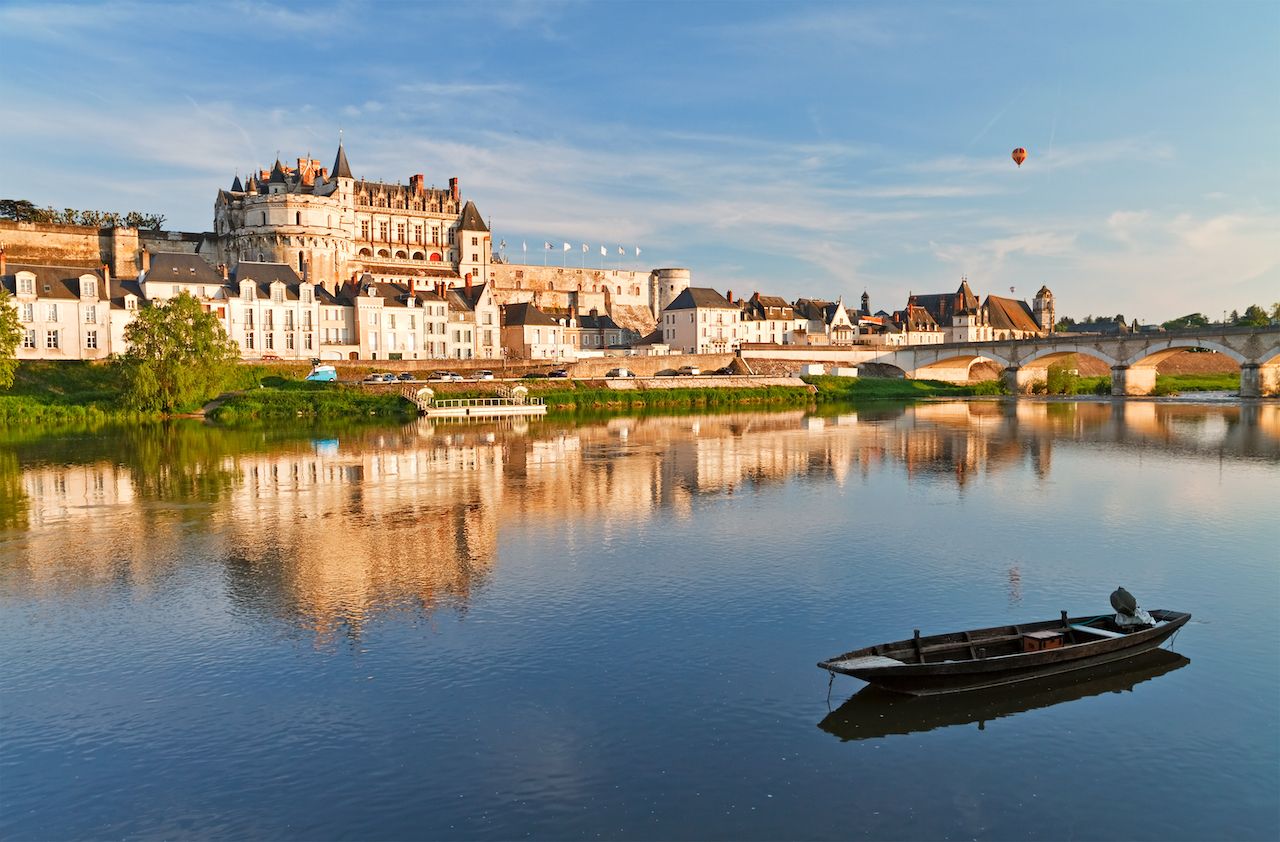 If you are not driving, the more efficient and fast way to reach the region from Paris is via the high-speed train, the TGV. The journey time is as little as 57 minutes to the city of Tours. All routes leave Paris Montparnasse. The train itself is of a very high standard; the only downside is that you’ll hardly have time to crack the spine of your châteaux guide book or enjoy a glass of Chinon as you watch the French countryside zoom past. On arrival, train travel around the region is also very good, but it might be worth looking into renting a car or bike, which you can do at most main stations. The TGV ticket and hiring of local transportation can be built into a package. 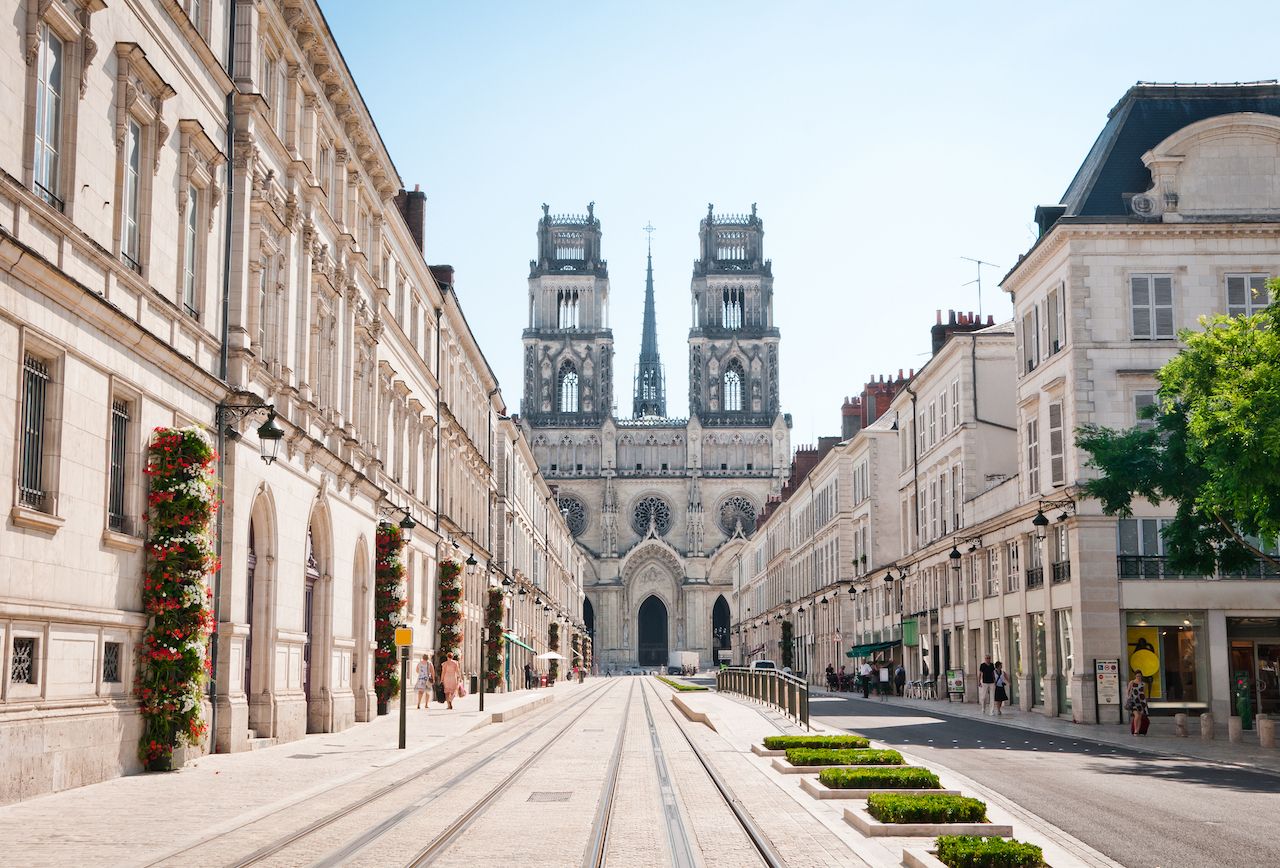 The Loire River is the main character in the history of the development of modern towns and cities and of the country of France itself. It stretches 627 miles and is the longest river in the nation. Fueling farmland and pastures and transporting not only crucial trade but also people and ideas, its role in history is integral to the development of urban dwellings.

If you are looking for a quieter alternative to Paris the cities of Tours and Orléans offer similar attributes as the capital but have a little more charm. 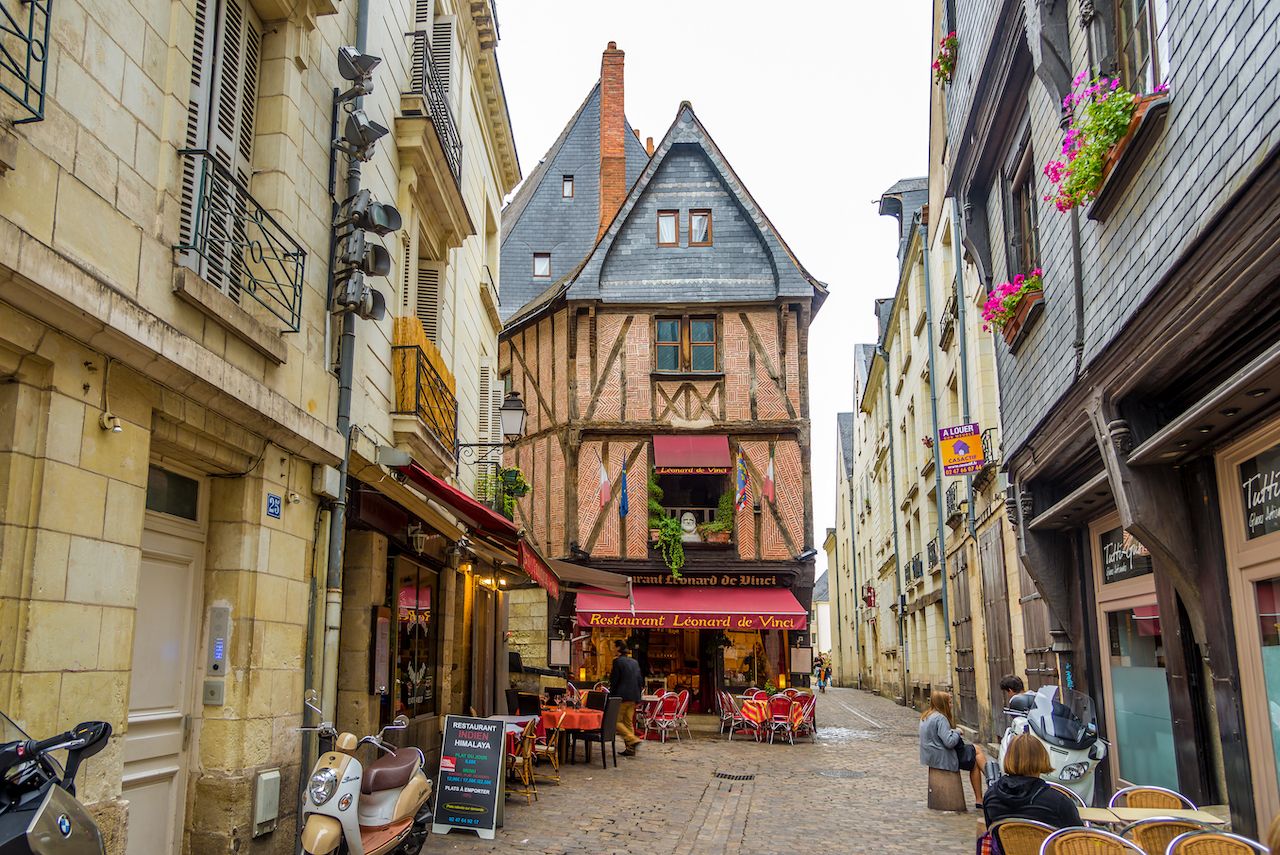 Home to French novelist and playwright, Honoré de Balzac, Tours was developed from a Roman town and a medieval religious center linked to the life work of Saint Martin. Surrounding Saint-Gatien Cathedral the medieval streets retain original buildings with gothic accents such as gargoyles, and the blend of classic French Renaissance architecture against the bold half-timbered facades of the medieval sector makes for a fascinating walking tour.

Tours is indeed a city to discover on foot and if you are interested in history, art, and architecture you are in for a real treat. Some of the highlights include the Saint-Gatien Cathedral, a masterpiece of French Gothic architecture; the neighboring Musée des Beaux-Arts, Hôtel Goüin, one of the finest Renaissance buildings in the city; and the restored Place Plumereau square, a perfect spot to relax and sample some of the best regional produce from one of its many restaurants. 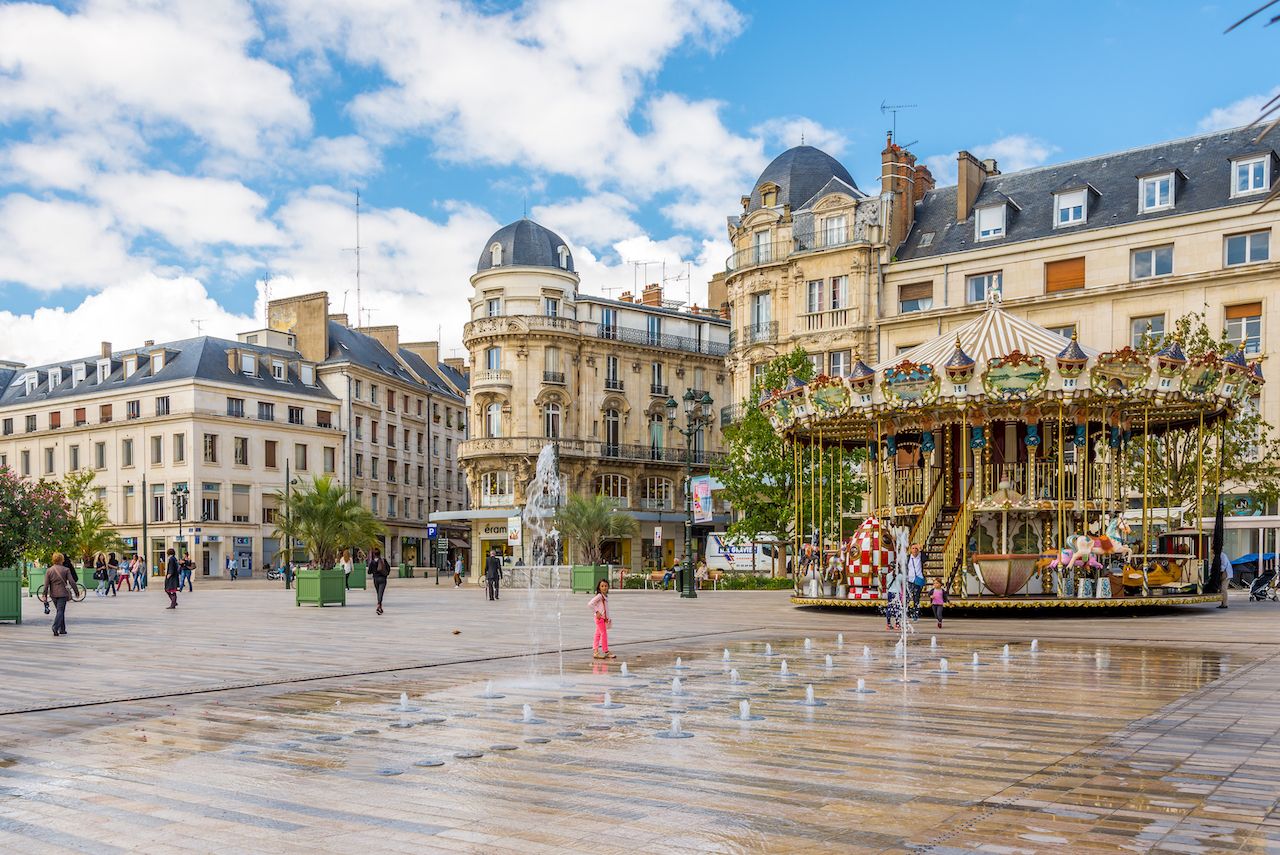 The city of Orléans is where you need to come to eat, drink, and enjoy live music. The quality of dining establishments here is hardly surprising considering the city draws locally from the vast amount of market gardens and sources meat, poultry, and cheese from the nearby farming region of Beauce. Some of the higher quality restaurants such as La Parenthèse, La Dariole, and L’Hibiscus offer Michelin distinction menus, but what makes Orléans a particularly special city to eat are the small restaurants and cafes in hidden courtyards or those with a terrace overlooking The Loire — of which there are plenty.

Orléans is an energetic city that begs to be enjoyed from first thing in the morning right through to late at night. The city’s planning is harmonious with the river and its elegant architecture is as stunning in the afternoon sunshine as it is dramatically floodlit at night. In the evening the historic Rue de Bourgogne is the perfect place to have a drink and listen to live music. The streets are lively and it’s welcoming to all, including families.

Some of the grandest châteaux are here 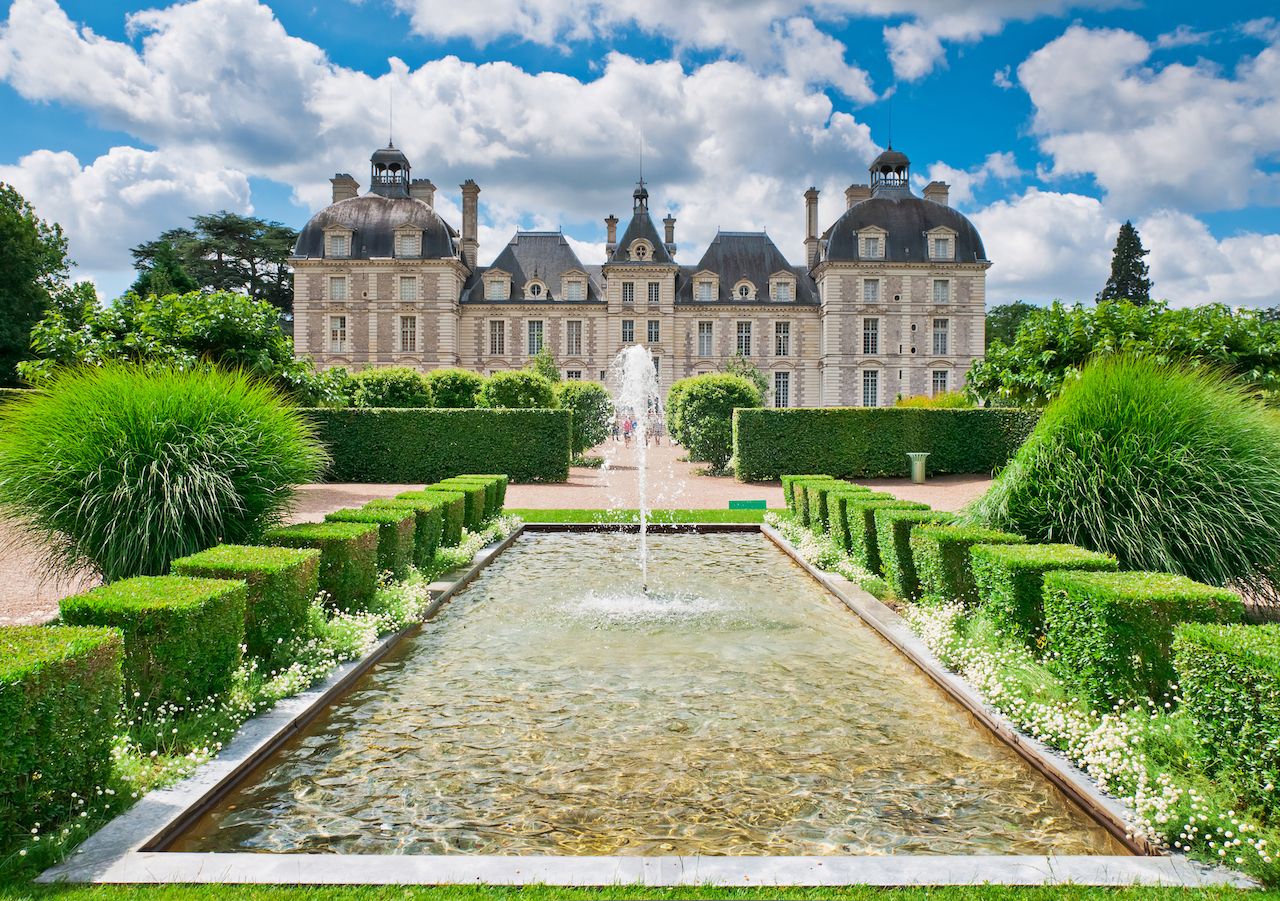 The castles and country houses of the Loire are reason alone to visit the region. Even if history and art don’t normally excite, this was once the epicenter of the Renaissance in France and some of the buildings and the stories behind the opulence and occupants will not disappoint. As noted, though, the quantity of noble manors you could visit can feel overwhelming. Although you may want to tick off every château on the route, we recommend choosing a select few, going early in the morning to avoid crowds, and spreading out the visits throughout your stay in the region. 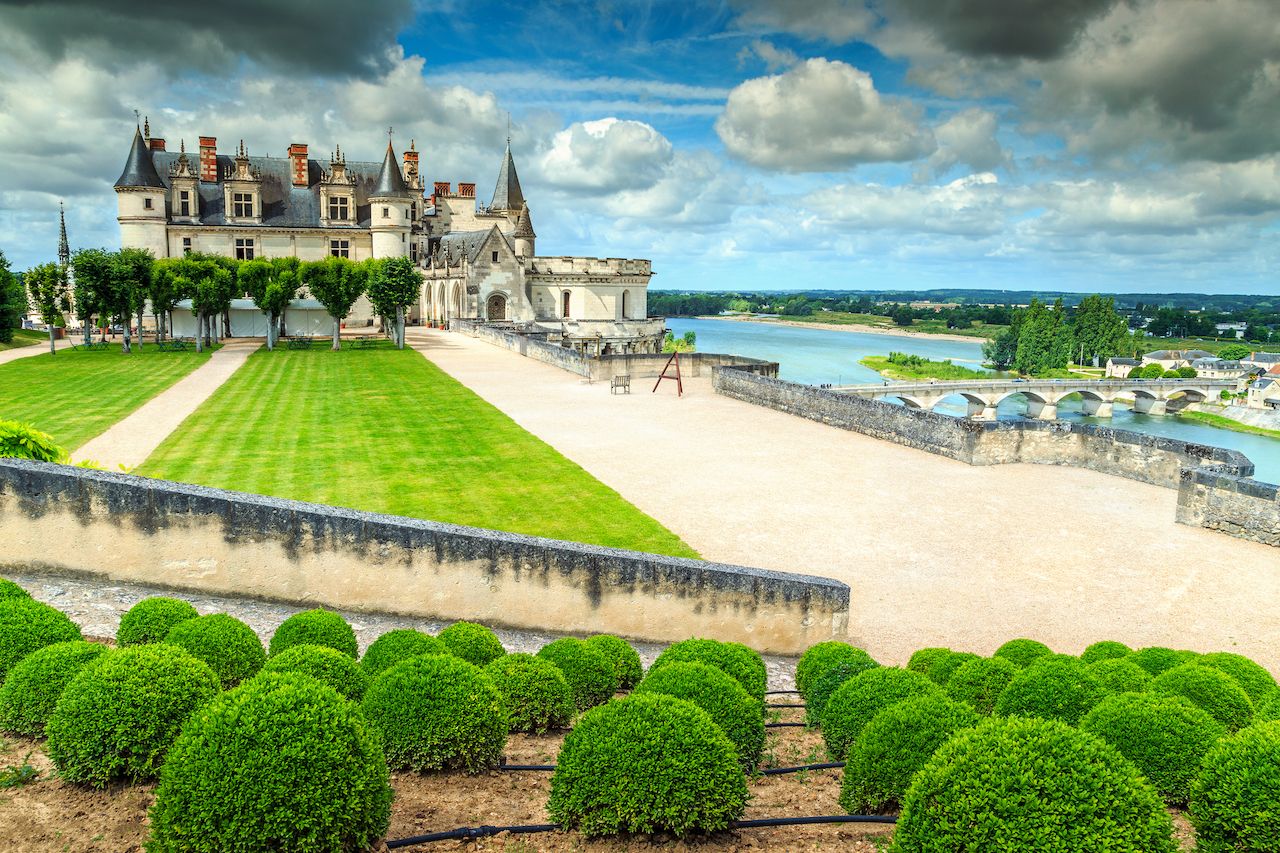 Considered the most royal of the chateaux of the Loire, Château d’Amboise was once home to five kings, and it is whispered Julius Caesar spent a winter in its quarters. This was also where Leonardo da Vinci was laid to rest. Da Vinci spent many years in Amboise as an honored guest of the King of France and resided in the charming manor house in Amboise called Clos Lucé.

You can explore both the châteaux and Clos Lucé in one visit as they are but a short five minute walk away from each other. The châteaux of Amboise towers over the village and looks out of the Loire, offering spectacular views of the region. The interior has been restored in places, but the furnishings are authentically and wonderfully French. Down the hill, Clos Lucé has on display models of Da Vinci’s canon, car and helicopter, and many sketches and drawings that are a unique collection in his final residence. The gardens of the manor are quite fantastic too and it’s worth planning a visit around lunchtime, as its restaurant, L’Auberge du Prieuré, offers a menu from the Renaissance period and prepares all food with traditional methods of the time. 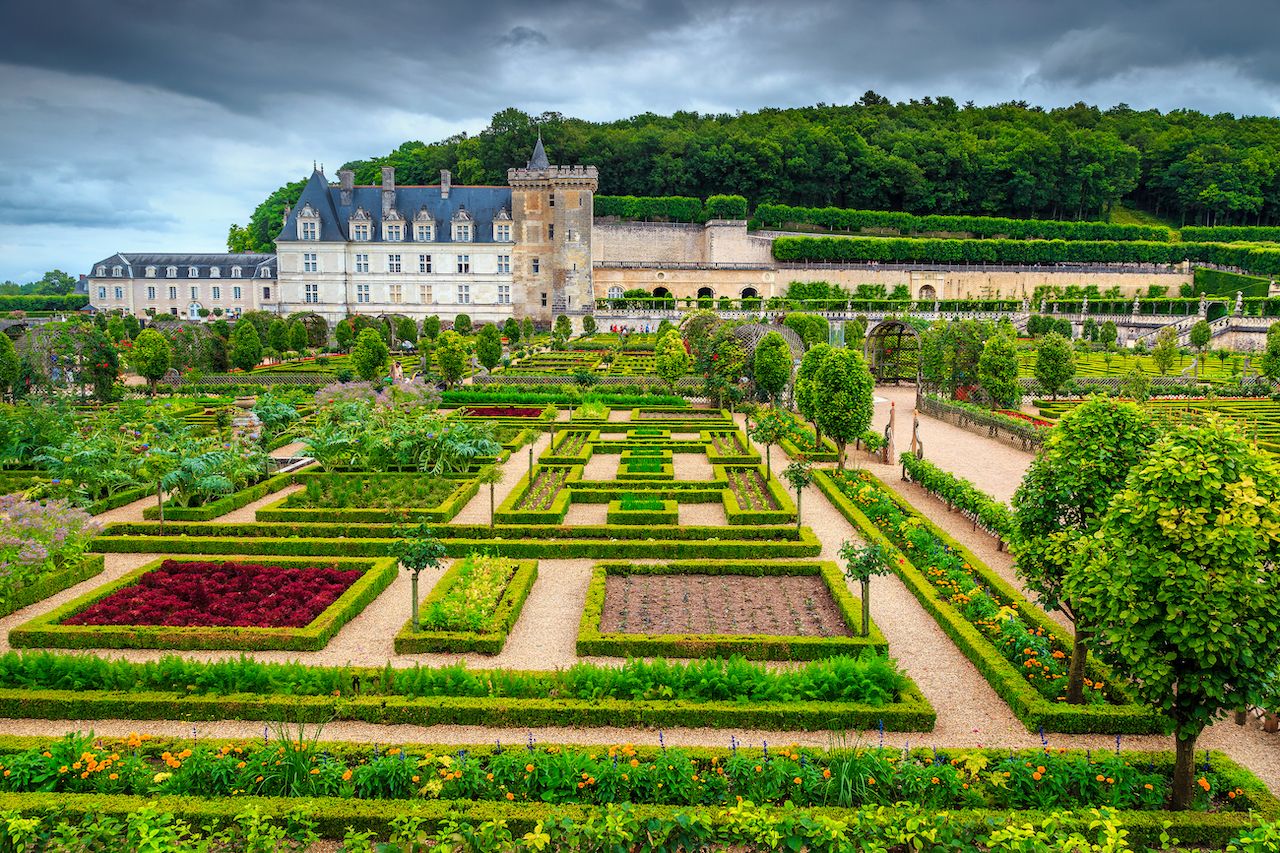 Villandry is a treasure in an already spectacular valley. One of the last great châteaux to be built in the Loire Valley during the Renaissance, it is a perfect example of 16th-century architecture. The building is bordered on three sides by a moat, which creates a dramatic impression on the visitor. The luxe interior and its scattered family heirlooms are worth viewing, but it is the gardens that people really come to see.

Inspired by the influence of the Italian Renaissance, Villandry’s geometrically styled grounds are arranged into three terraces. The top level has a huge pound from which the fountains and the moat draw their water. The second tier is an ornamental flower garden and the lower is home to the spectacular vegetable gardens. The château owner, Dr. Joseph Carvallo, still lives there today with his family and enjoys picking vegetables and herbs from the gardens for their family kitchen. The gardens are so incrementally detailed and so delightful that you could easily spend a long afternoon exploring the grounds.

The Loire is also known as The Garden of France 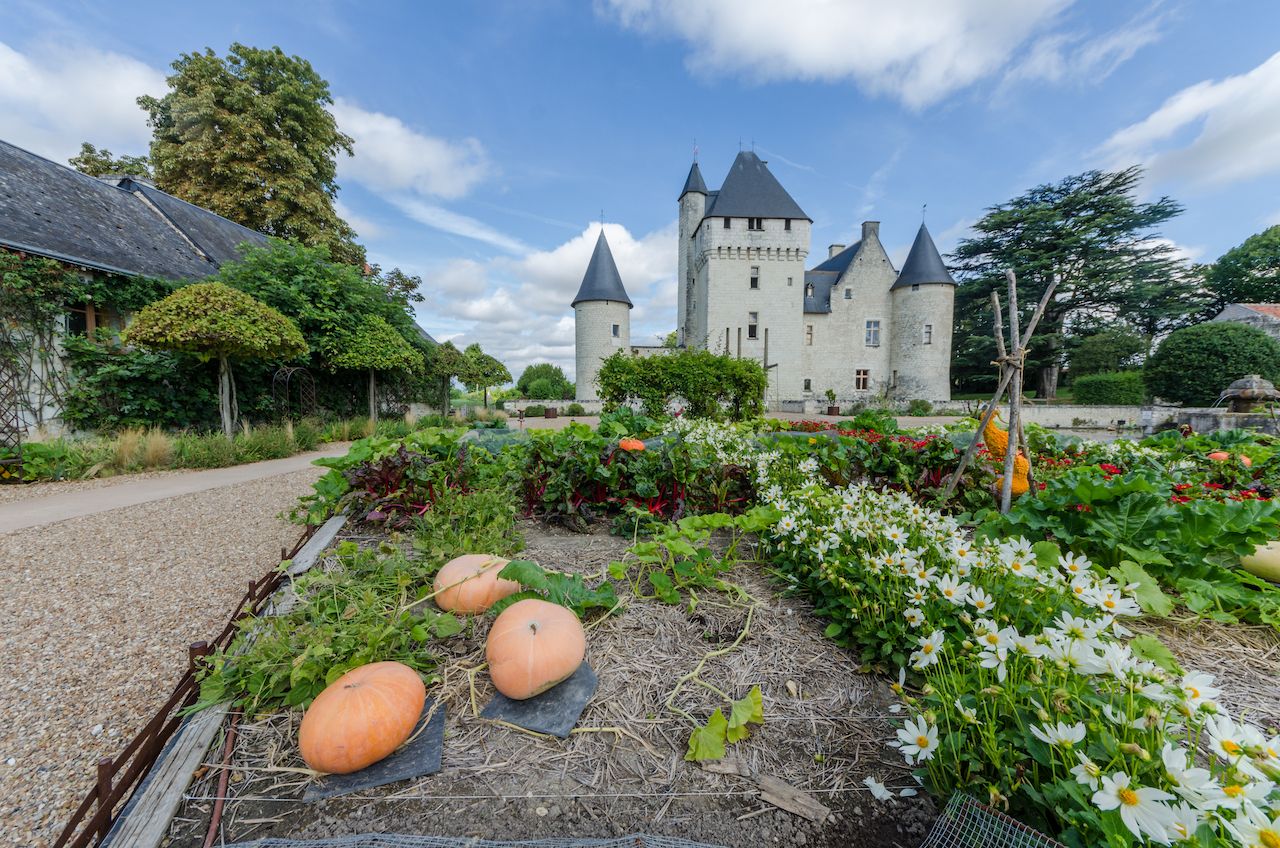 Along the Loire, you are never more than a stone’s throw from nature — even in the cities. It’s known as the Garden of France for very good reason. The long tradition of curating gardens, both for pleasure and for consumption, started during the Renaissance. Today the region still produces some of the country’s finest fruits and vegetables and has some of its loveliest green spaces.

While the gardens of Villandry may be the most perfect all-in-one stop to visually appreciate the level of landscaping and work that goes into French formal gardens, there are others worth visiting — and each has its own distinct character.

A little over six miles from Chinon and Richelieu, the château gardens of Le Rivau are home to over 450 different varietals of rose. Similar to Villandry, it has a notable kitchen garden and a maze. Just as grand are the wooded 55-hectare gardens of Château de la Bourdaisière, located between Tours and Amboise. Its tomato conservatory is home to over 700 varieties and an afternoon could easily be lost in its ancient orchard. The groundskeepers have also arranged the garden of dahlias — of which there are over 400 varieties — by color.

These quintessential examples of some of the world’s most manicured and well-planned gardens can be busy during the summer, so a quieter option such as the cultivated gardens of Saint-Cosme Priory, located only two miles from Tours, is an ideal place for a quiet afternoon stroll, offering peace and sanctuary beside the buildings of the old monastery.

Within the cities and towns, there are many planned gardens and green spaces to enjoy, too. The botanic gardens of Orléans are particularly special, but the region is also an excellent place to rent a bike and enjoy the natural beauty of the landscape along the banks of the river. Cycling is a perfect way to hop between towns and vineyards — either on a planned route, of which there are many, or just for a casual ride in the countryside.

Food + DrinkFind the French wine tasting of your dreams in the Loire Valley
Tagged
Travel France
What did you think of this story?
Meh
Good
Awesome

A carrier pigeon message from WWI was discovered in France