Road trips invite unscheduled stops regardless of where you are. En route from Tours, France, to the wineries west of the city, a minimalist sign with the words “cave” and “dégustation” called for a u-turn and exploration. It was before noon, and myself, my fiancée, and my future brother and sister-in-law were just getting started on our second day of winery hopping in the Loire Valley. Here, we quickly learned, every detour is worth taking.

France is a wine country. That’s no secret. But the Loire Valley is often overlooked by visitors from the United States who are more familiar with the vineyards of Bordeaux, Burgundy, and Champagne. Nevertheless, the Loire Valley is the perfect stereotype of the ideal French wine getaway, complete with plentiful (and accessible) vineyard tastings, a vibrant central city, and too many chateaux to see in one visit. 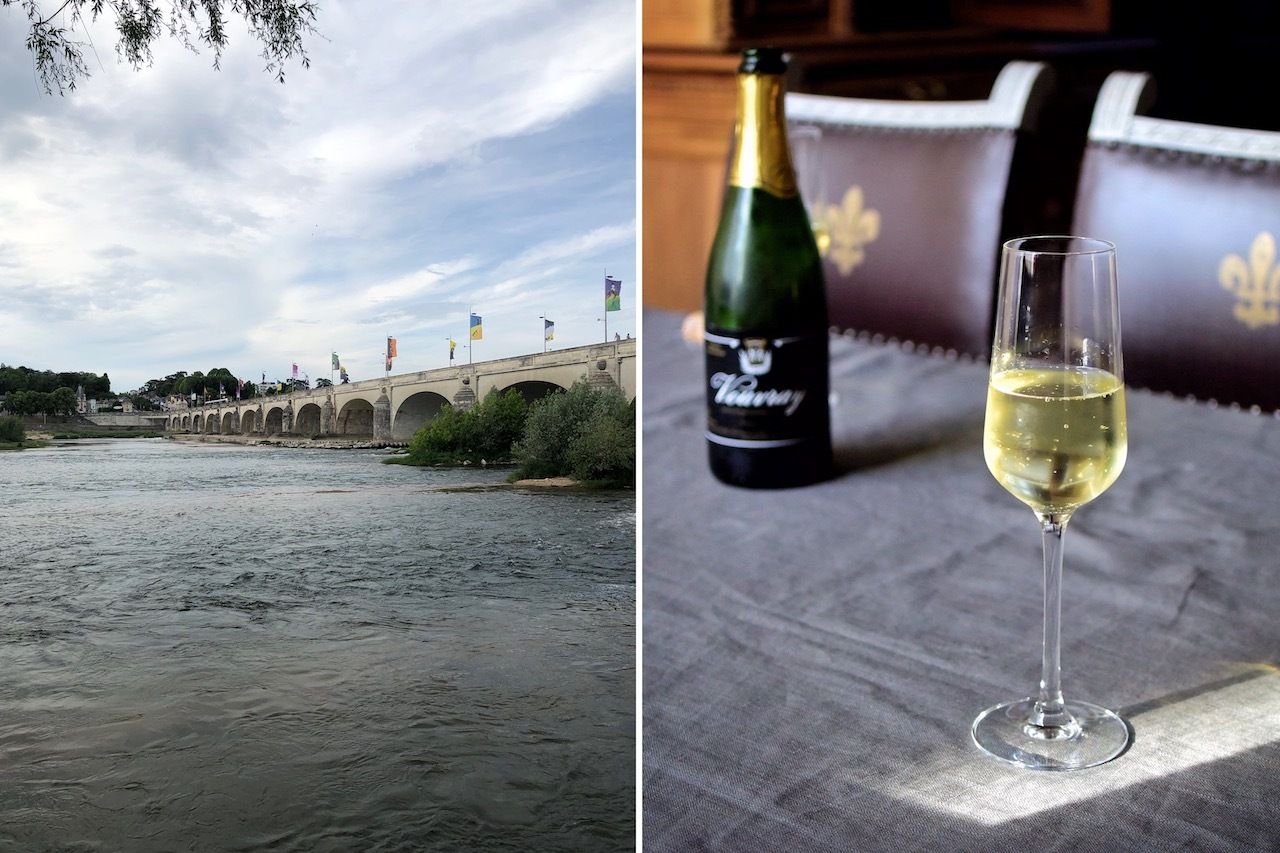 The Loire Valley is defined by the Loire River, which runs from the Atlantic to central France. The valley’s primary wine region is centered around the first half of the river, which stretches from Nantes to Orléans. The range of styles made here is as vast as the region itself. The sparkling wines of Vouvray, a quick bus ride east of Tours, are as refreshing as the country’s more famous bubbly without the price tag. It’s where you’ll find Sancerre, one of France’s most famous white wine regions, as well as Chinon and Saumer, both of which are known for light, chillable reds made with cabernet franc.

On our drive, the cave that caught our eye was exactly that: a cave. The hollowed out mountainside faced the Loire River, and the stone was removed centuries ago to build surrounding cities. Wine barrels from regional vineyards took the place of the solid rock.

It being early, we asked the woman if we could taste some wine and if by chance she spoke English. Her response was “very little, but I will try for you.” We laughingly told her it was probably better than our French, as one does when there are few shared words. She asked us to show ourselves around the cave while she pulled some bottles. 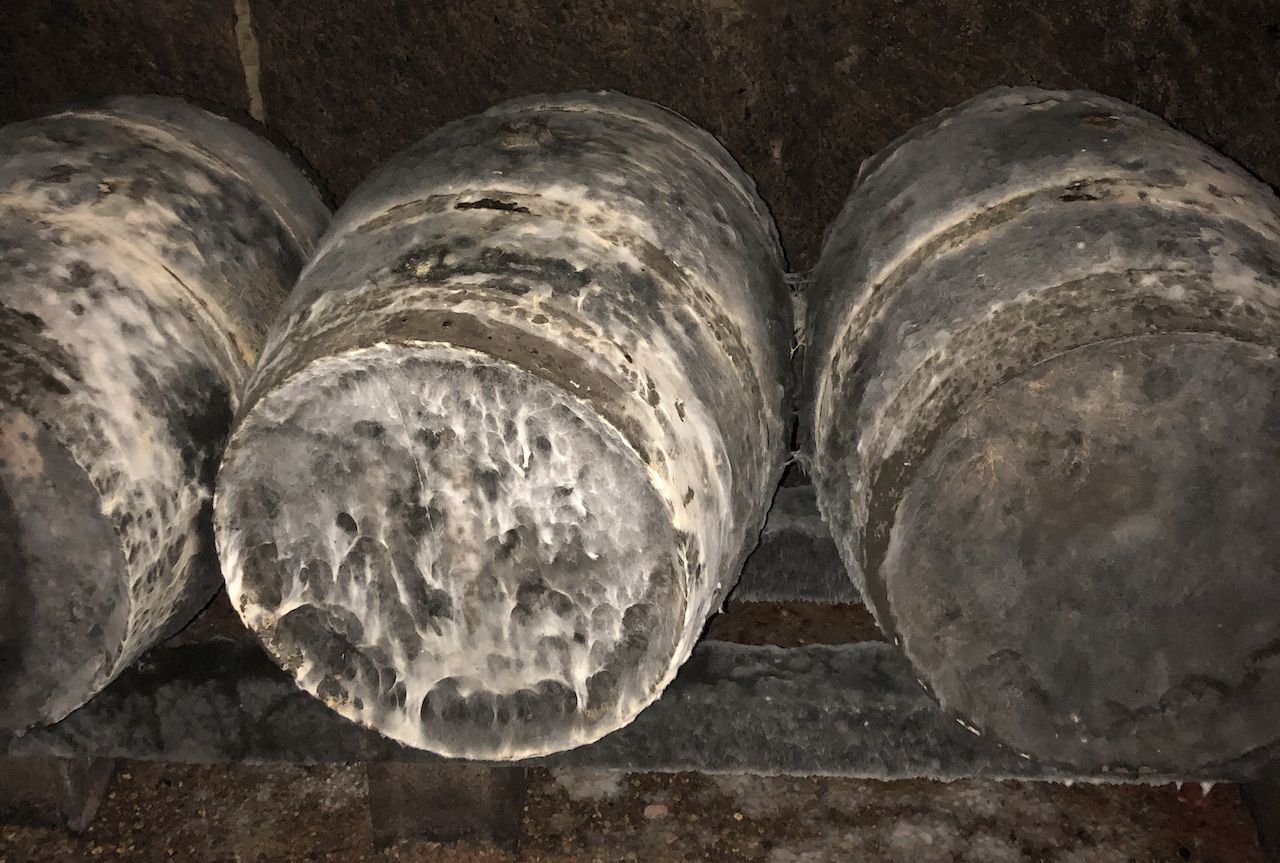 The lights strung on the ceiling stopped once we walked far enough off the worn path, but the barrels continued. The small radius of light from our phones revealed mold-covered barrels with names we didn’t recognize and dates from before we were born. The level of freedom to simply walk among the aging wine before tasting was a bit shocking coming from the US, a country where every unsupervised area is a potential lawsuit waiting to happen. Yet the go-as-you-wish nature of exploration guided much of our trip.

The four of us were in France for a number of reasons. My fiancée Heather had just finished dental school at Columbia University, for one, and I proposed shortly after. Her sister Jen and brother Bryce were eager for a vacation and the timing worked out — even more so for us, as Jen was pregnant. That meant no drawing straws for who would drive during the tasting days so long as we budgeted in some non-drinking activities as well. 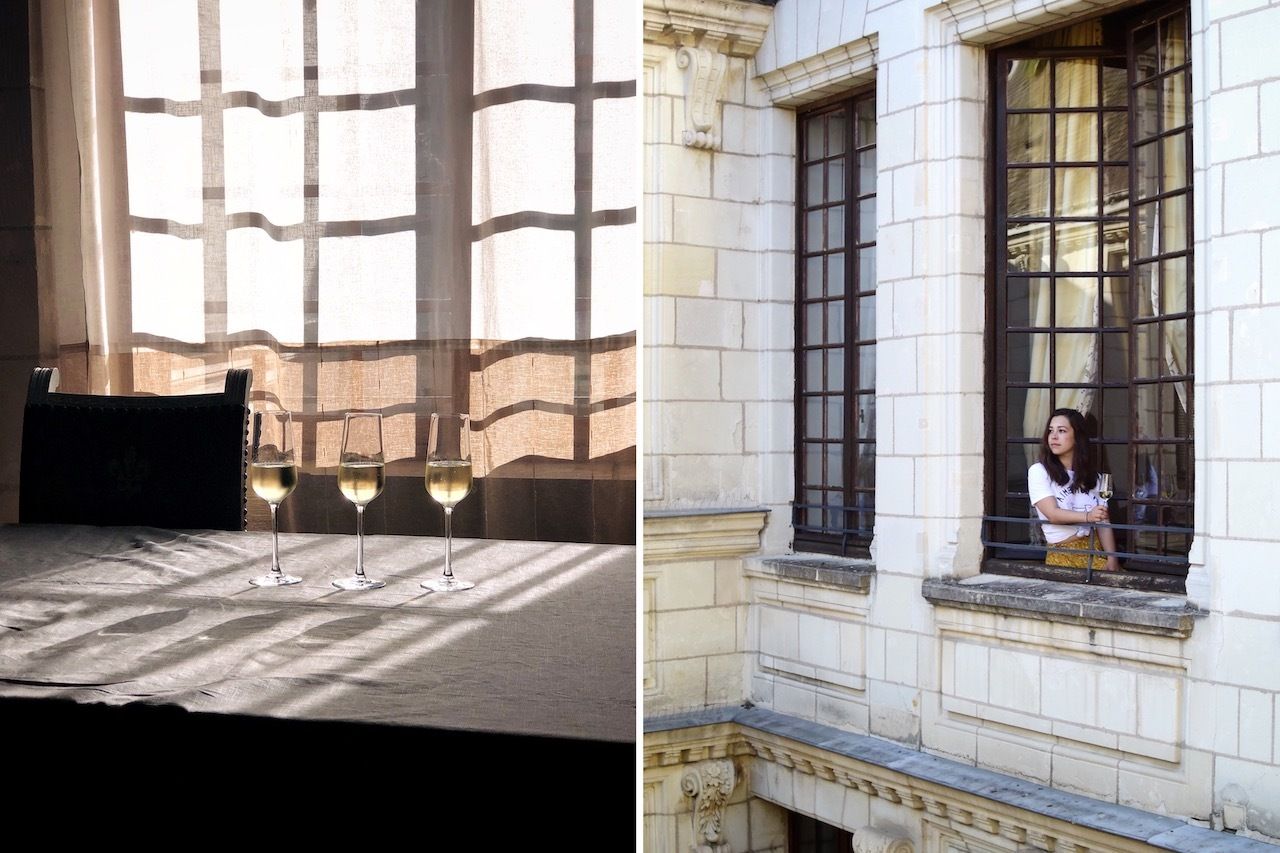 We landed on visiting Tours because of its affordability and accessibility. A college town with a little more than 135,000 people, Tours seemed like a natural starting point for a first visit to the Loire Valley. We arrived in Tours from Paris by train and walked to our Airbnb on Rue Paul-Louis Courier after a quick beer stop at Les BerThoM. The Airbnb was ancient — the courtyard, worn stone steps, and massive wooden doors showed as much — yet luxurious, with plenty of space and a welcome bottle of Vouvray sparkling wine. Best of all, it checked off the two most important qualities: extremely affordable and near the main strip of bars and restaurants. 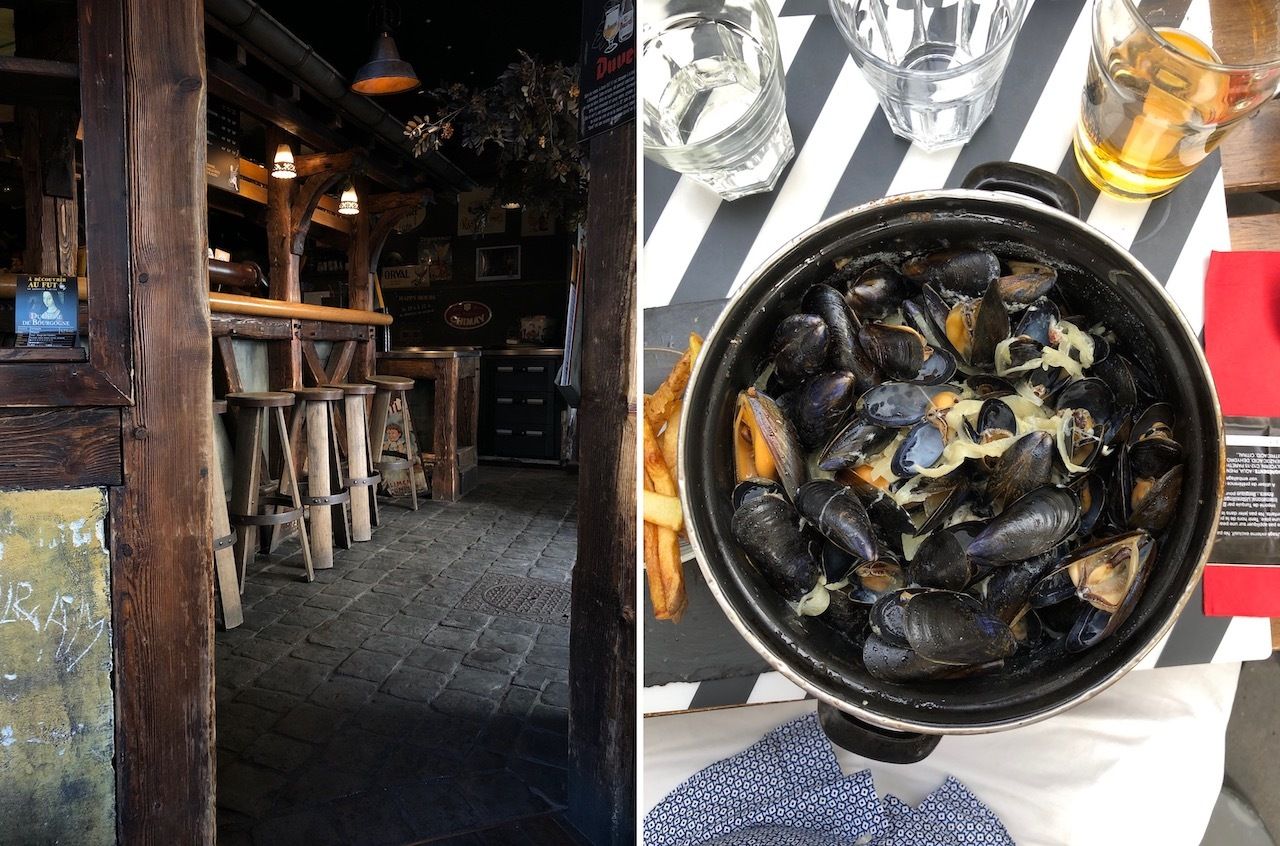 Daily life itself makes Tours worth a visit. We took the bus for a couple of euros to Vouvray and walked to various tasting rooms and wineries to sample sparkling wine, following local recommendations from the tasting directors for each next stop. In the evenings, we took advantage of the town’s nightlife as we transitioned from mussel-filled dinners to drinking pastis and craft beer at riverside bars during sunset. At night, we strolled Rue Colbert and stopped for food and wine as we pleased, enjoyed palate refreshers of French craft beer at Les Dix Fûts, and ended the night with Cognac or pastis at whichever spot was still open.

The true draw, however, were the wineries to the west of Tours.

Many will tell you that guided bus tours are the only way to see the Loire Valley’s wineries and chateaux, which are nearly just as famous. Our Airbnb host was one of those people and went so far as to call bus companies that she is connected to in order to set something up. Just say no. All you need is a rental car (easily obtainable and affordable from the rental spots near the train station), internet to map out places open for tastings, basic French and a phone to ask if places are open, and someone willing to drive.

You won’t be left thirsty for options. The Loire Valley Wine Route is the longest in France at around 500 miles, with large cooperatives, small family vineyards, and, of course, the famous chateaux with sprawling manicured gardens. Vins Val de Loire, the marketing arm for the region, has an interactive map with itineraries, making the wineries easy enough to find on your own. In general, someone at the winery will speak English (or at least enough), but the tastings are far from the organized affairs you’ll find in many popular wine regions. 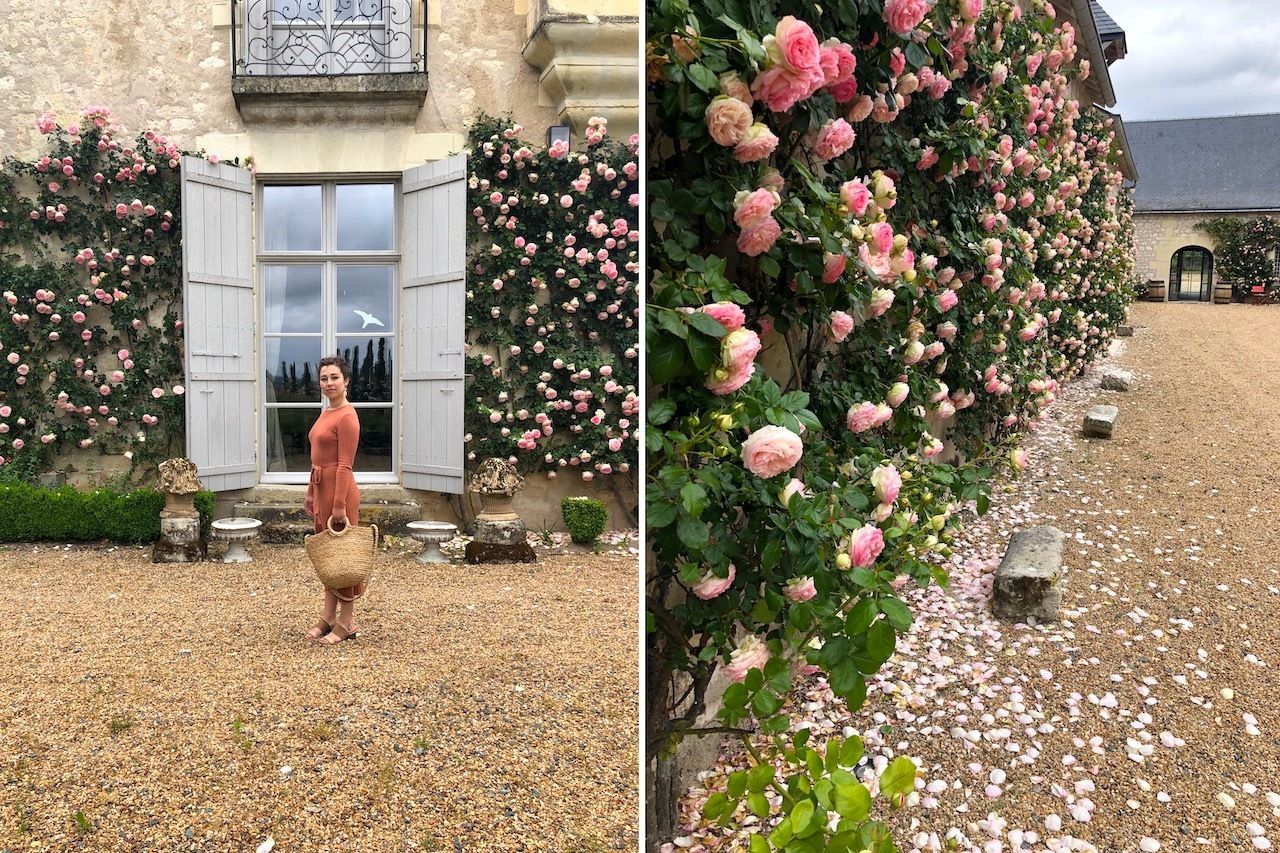 At Château de Minière, a woman in the office told us to wander the property while she finished her lunch. Fields dotted with red poppies that rose about four feet surrounded the property, and pink roses covered the walls of the chateau. The tasting, which included the full range, was free. We left with a few bottles — something that quickly became a habit. At the Chinon winery Les Georges, we entered through the winemaker’s home and waited for the tasting in the courtyard as his children, who spoke three languages, played around us with their dog. The tasting itself was a long affair complete with stories of his travels to New York (and, naturally, we left with some more bottles).

We managed seven stops on our loop. Some were planned, but most came from asking where we should go next. We saw many flower fields and pet more than a few winery dogs. We drank lots of wine and bought far too many more — something that’s hard to avoid when each is around 10 euro (around $11.30 at the time). I’d remember all our bottle splurges well a week later as I lugged a case of wine stuffed into my suitcase up a two mile hill at 4:00 AM to catch a train out of Cassis on the southern coast.

Over our time in the Loire Valley, we tried to mitigate the number of bottles by having wine at every occasion. We kept stumbling on new finds, however, as happens when wine can be found on every detour. But that’s what makes the Loire Valley such a dream location. 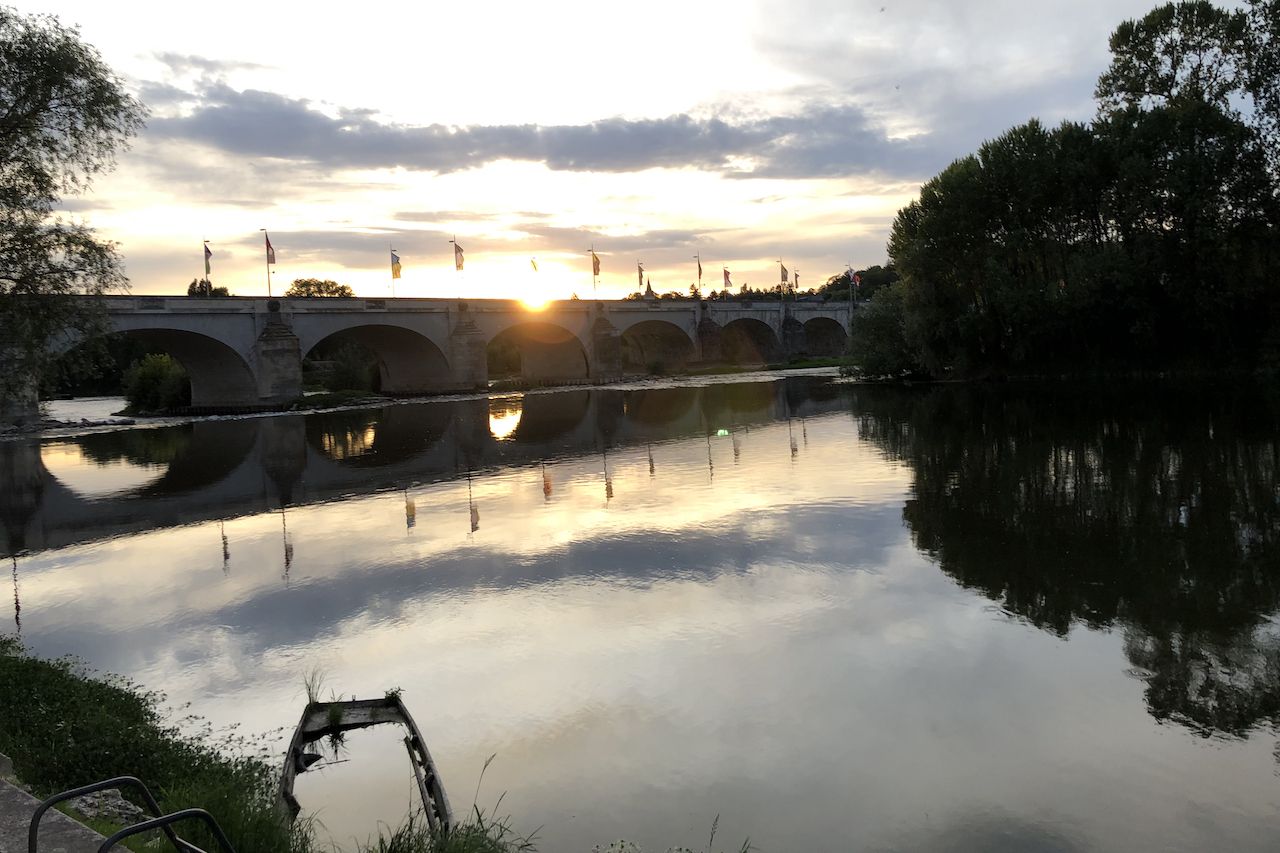 Where to stay: Tours is a natural home base to see the Loire Valley. Rental cars are easily accessible, or there are plenty of guided tours if you’d rather go that route. Airbnbs are the most affordable option in the city, but you shouldn’t have trouble finding a hotel. The most scenic way to get to Tours is to arrive at Gare de Tours by train.

Where to day trip: For a quick stop, head to Vouvray and sip sparkling wine. The best place to start is Caveau de l’Oiseau Gourmandeur — Vignobles Feray, where you can taste and purchase bottles as well as gain intel into what’s open that day. Cave de Vouvray is a modern tasting room where you can learn about the region.

If you rent a car, I recommend heading west from Tours and following the river to Saumer and Chinon. Here you’ll find whites made with chenin blanc and sauvignon blanc, along with reds made with cabernet franc, gamay, and malbec (called côt here). Use the Loire Valley winery guide to plot your trip, and call ahead to make sure someone is around for the tasting. Be prepared to be flexible, though, and always ask for suggestions of where to go once you finish your tasting.

WineWhy Champagne Is the Gold Standard for Food and Drink Sustainability
Tagged
Food + Drink Wine France
What did you think of this story?
Meh
Good
Awesome