Editor’s note: While French Polynesia is open for tourism, COVID-19 has affected operations. Normal schedules and tours are expected to resume in 2021. Check with individual establishments for confirmation.

French Polynesia may seem like the edge of the world, mere specks of land on a vast, watery horizon. But there’s nothing remote about it. For centuries, French Polynesia (often called Tahiti though that is technically just the name of the main island) has been one of the busiest places in the South Pacific.

“Tahiti is at the center of the Polynesian Triangle,” says Milton Laughlin, a celebrated Polynesian outrigger canoeist, “with Hawaii, New Zealand, and Rapa Nui at the corners. Polynesians colonized all the Pacific with double-hull sailing boats.”

But European arrivals in the 18th century, annexation by France in 1880, and the islands’ discovery by the international jet set in the 1960s nearly killed Indigenous traditions.

“We always fished, we always sailed, we always surfed,” says Tahiarii Yoram Pariente, a Polynesian “cultural coach” who has dedicated his life to preserving the oral history and ancient ways of his country. “But we lost so much of our wisdom, knowledge, and peace.”

The revival of Polynesian culture began around 1980, says Pariente. Before that, few people wanted to learn the Tahitian language. Tattoos were frowned on. Traditional clothing, dance, and music had almost died out. Now the old ways are everywhere to be found.

Unfortunately, a typical Tahitian holiday often focuses on four-wheel-drive ATV trips in the back-country, French cuisine at candlelit restaurants, jet-ski afternoons in a resort’s lagoon, and, of course, a stay in an overwater bungalow, often run by an international chain. But it would be a shame to limit one’s time to such cliché attractions when, with little effort and great satisfaction, a traveler can dive into (and support) the Indigenous culture of French Polynesia. 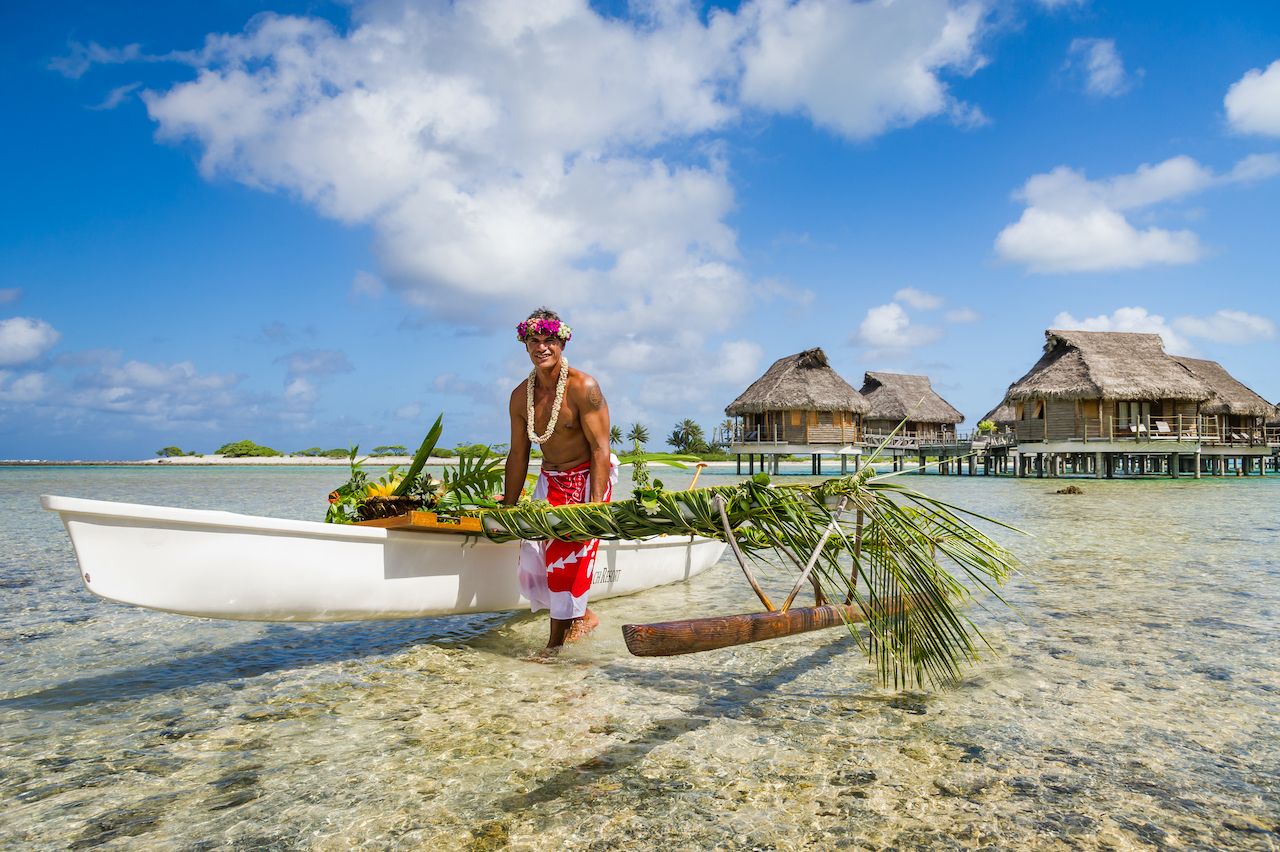 The age-old Polynesian outrigger canoe, called a va’a in Tahitian, enabled the islanders to settle a vast expanse of the South Pacific. They sailed the breadth of the Polynesian Triangle by celestial navigation more than 1,000 years ago. But with European colonization and modern sailing technology, much of that knowledge was lost.

Today, Tahitians are once again masters of the racing sport. Travelers who want to learn the skill can take multi-day lessons or just an afternoon jaunt at Va’a Spirit on Moorea or Tahiti Va’a on the island of Tahiti.

Tahiti Va’a, organized by Tahitian professional racers, uses only Tahitian-manufactured equipment. Milton Laughlin, a certified coach at Tahiti Va’a, is lauded as part of only the second all-Tahitian team to win the fabled Molokai Hoe, the men’s grand championship of long-distance outrigger canoe racing. And though he can wax poetic about va’a and the Polynesian spirit, when it comes to outrigger coaching, he’s all business.

“You will learn how to paddle first,” he announces to a small group of first-timers preparing to launch a six-person outrigger.

Thanks to the short-handled, slightly flexible wooden paddles, paddling isn’t as difficult as it might seem at first. The important thing is to maintain a rhythm among all the paddlers. To do that, one of the team is chosen to shout “Ho!” on every seventh paddle. At that shout, everyone paddles once more, then switches sides, alternating left-right, left-right.

The va’a glides across the surface, like skate blades on an iced-over pond. An abundance of coral (some 170 species throughout the islands) rises from the seabed. Grouper, slender long red fish, black fish with yellow faces, and yellow fish with black faces loiter in the coral shallows. The effort of paddling is rewarded with a swift passage that gives an honest sense of accomplishment — and an understanding of how the early Polynesians conquered the seas. 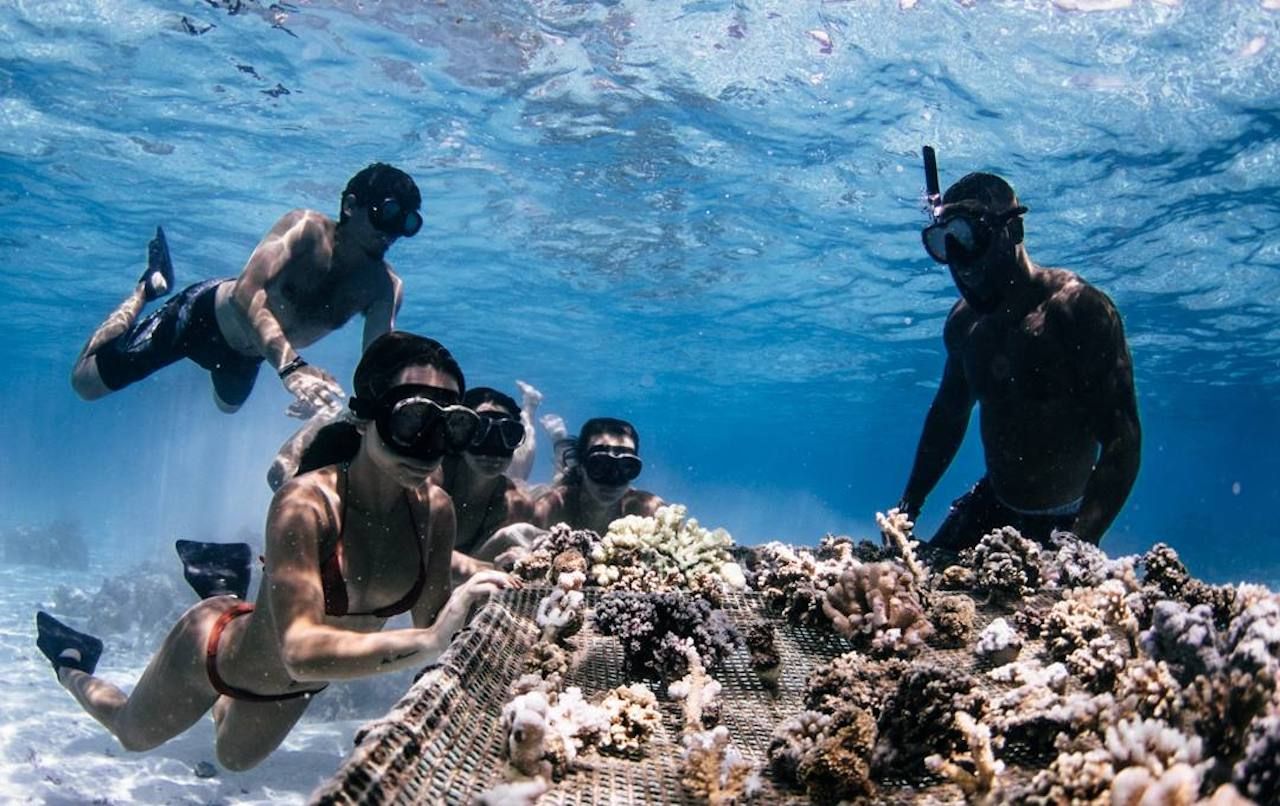 French Polynesia is famed among divers the world over for its wealth of coral gardens. And rightly so, except for one thing: They’re dying.

Global warming has taken a terrible toll on the islands’ coral. Unseasonably high water temperatures produce a bleaching effect. Cyclones, the crown-of-thorns starfish, and even some sunscreens (with oxybenzone and octinoxate) can kill the coral reefs.

The Tahitians, however, are not waiting for that to happen. Te Mana O Te Moana, on Moorea, is the local representative of Reef Check International and focuses mainly on research and education. Some hotels, including Bora Bora Pearl Beach Resort, have implemented voluntary guest fees that help underwrite the Biorock program, which uses electricity from solar power to help regenerate dying coral.

On Moorea, travelers can get a much more hands-on experience by visiting Coral Gardeners, an upstart replanting organization founded by Titouan Bernicot, a young freediver who realized the established powers simply weren’t doing enough. Begun in 2017, Coral Gardeners started an adopt-a-coral program to raise funds to repopulate the undersea life forms. They use “super” corals that are resistant to rising water temperatures.

“The government doesn’t do much on its own about the coral issue,” says Taiano Teiho, a founding coral gardener, thus leaving much of the work in private hands.

Visitors select a baby coral plant then swim with Teiho, Bernicot, or another staff member into the waist-high water of the lagoon and plant the coral in a bed where it will mature. Three weeks later, the staff replants it on dead coral mounds where it’s most needed. Guests are invited to name their coral. I called mine Esperance, French for “hope.” A two-and-a-half-hour tour costs $50 USD, plus a $30 contribution to select and adopt one’s own coral. 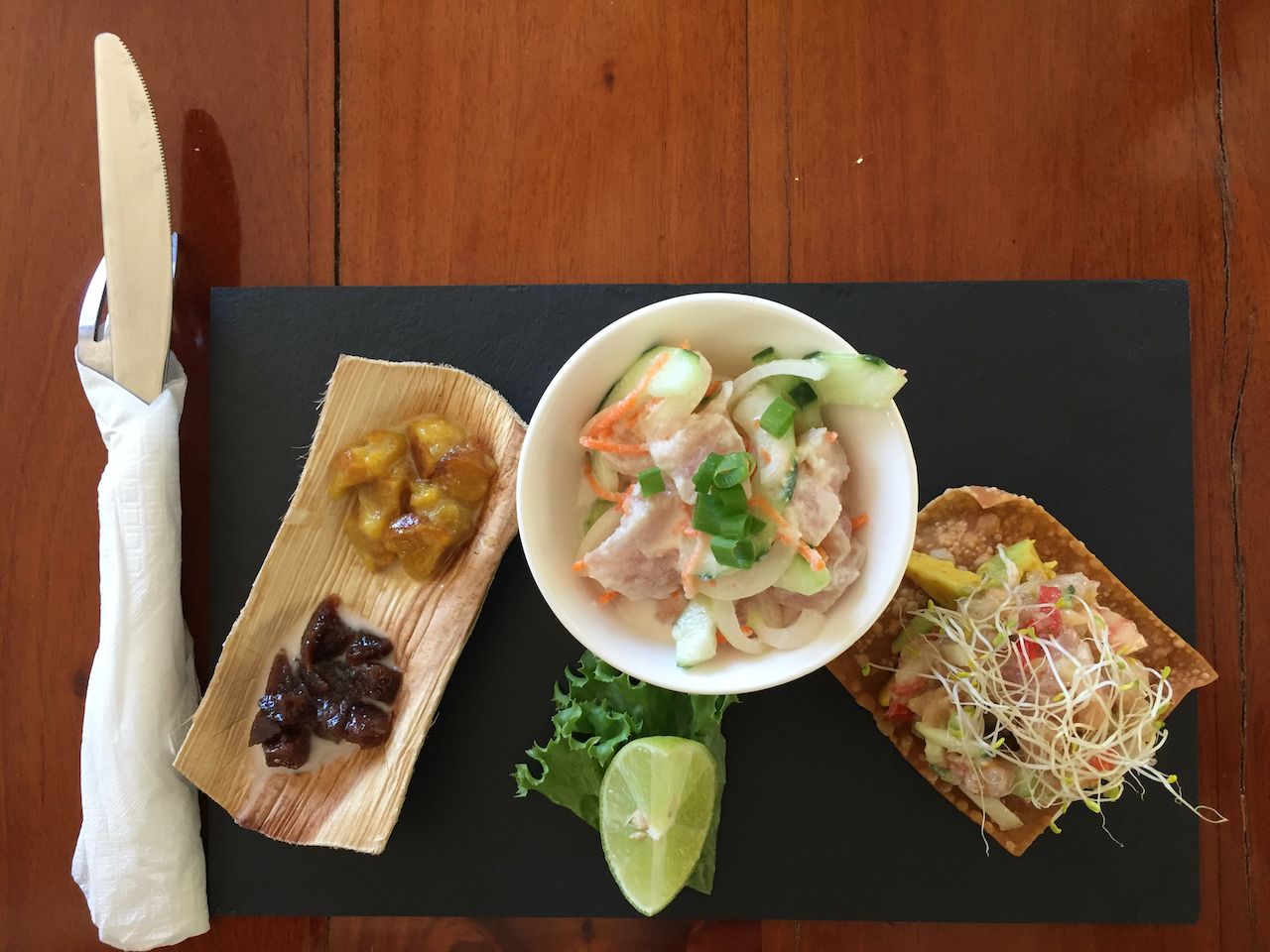 The temptation in Tahiti, as in so many resort-intensive destinations, is to dine on little more than omelets, crêpes Suzette, chicken wings, and other familiar fare in the hotel restaurant. But there is enough variety in Polynesian cuisine to satisfy any diner, and enough locally owned eateries to provide curious travelers a surfeit of sustenance.

First and foremost is tuna. Poisson cru (raw tuna with vegetables) is for all intents and purposes the islands’ national dish, a marinated fish salad with lime, peppers, coconut milk, and whatever else the chef has in the larder.

But there’s far more, of course, thanks not just to the bounty of the sea but also to the treasures of the rich Polynesian soil. Local produce, often found at roadside stands and farmers’ markets, includes eggplants, zucchinis, bok choy, radishes, carrots, cucumbers, pumpkins, mangoes, bananas, avocadoes, and sweet potatoes.

Casual visitors to the islands can create their own culinary excursions or sign up for an organized food tour on Moorea or Papeete. Any itinerary would do well to focus on locally owned mom-and-pop cafés, out-of-the-way groceries, and so-called “snacks” (humble fast-food eateries) that cook up some of the best of what Tahiti has to offer, ranging from Chinese-influenced chow-mein sandwiches to boiled chestnut, called mape (pronounced mah-pay). Such homegrown purveyors provide a peek into the daily life of the islanders, offer a cultural alternative to steak au poivre back at the resort, support a grassroots economy of local Polynesian businesses, and present an appetizing (and memorable) way to taste Tahitian culture, quite literally. 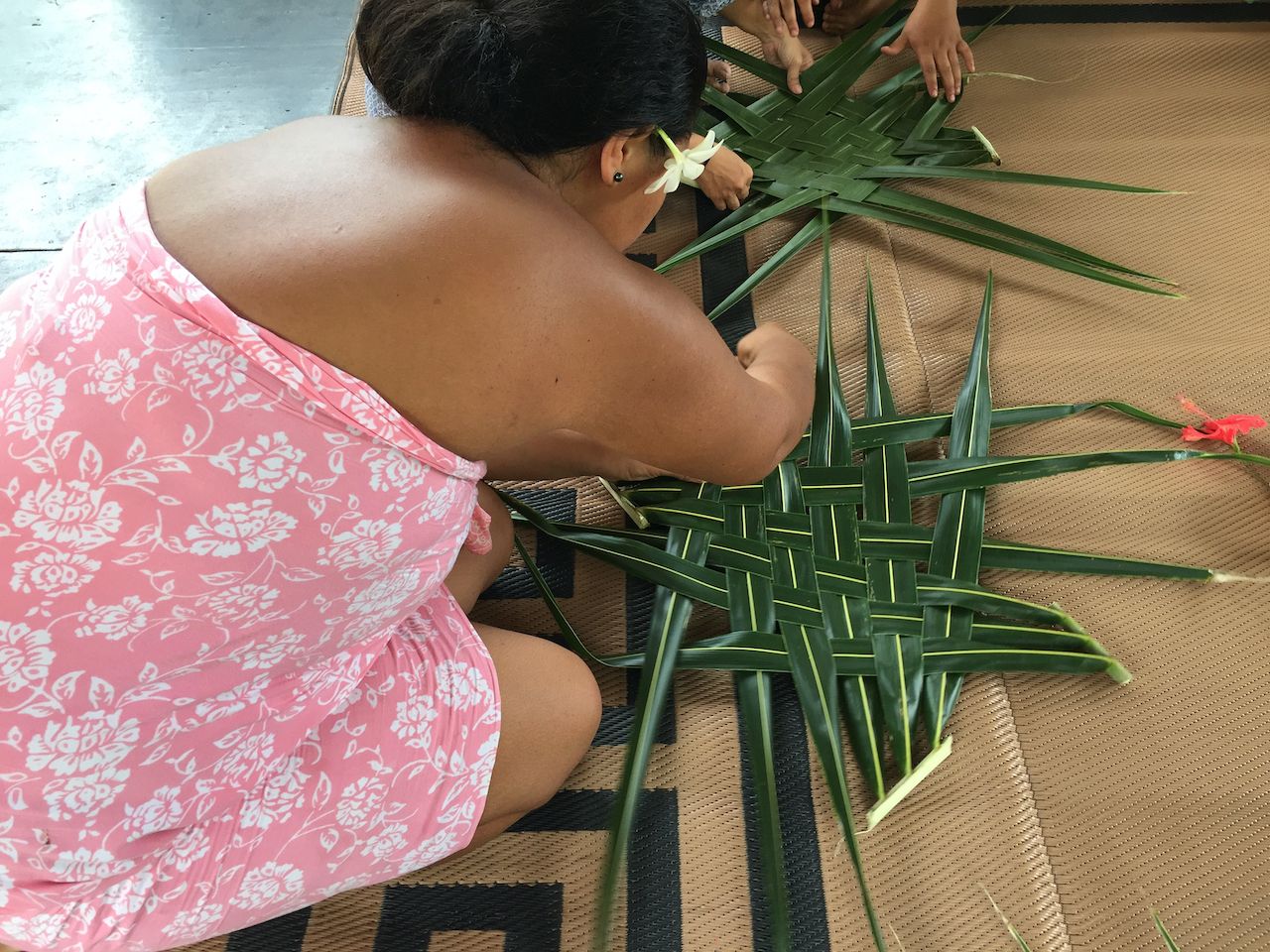 One of the newest ways to experience the depth of Polynesian culture is to visit the nonprofit Espace Loisirs Kultur (ELK), a cultural center on the island of Moorea.

“We want to teach our children about our culture,” says Tamara Teina, born on the Polynesian isle of Rapa and a cultural interpreter at ELK. “These things aren’t taught in our schools, but we don’t want to lose them.”

The roster of activities is like a restaurant menu: lei-making, palm-frond basket-weaving, ukulele-building and -playing, and traditional dance. Guests can come to ELK for the whole day, and the center’s staff will build a program around their interests, including massage, coconut-oil-making, and Tahitian language lessons. (They don’t currently have a tattoo or traditional fishing program, but they are developing them.) The goal is to offer a comprehensive exploration of all things Polynesian.

The center’s programs also include such homey offerings as oral traditions. The Legend of the Coconut, for instance, is told by Tore, who was born in Tahiti in 1945. Today he wears a traditional skirtlike pareu and a crown of palm leaves, but his deep-brown chest and shoulders are shirtless, exposed to the harsh Tahitian sun. “The prince of the lake was a big eel,” he says in his native tongue, while Teina translates. “Maui cut off its head and gave it to Hina, who set it down. There, coconut trees began to grow…”

Without an education system willing or able to carry out the mission, ELK has determined to spread such Polynesian traditions to Tahiti’s youth, as well as to share those traditions with visitors from across the seas.

On the dance floor 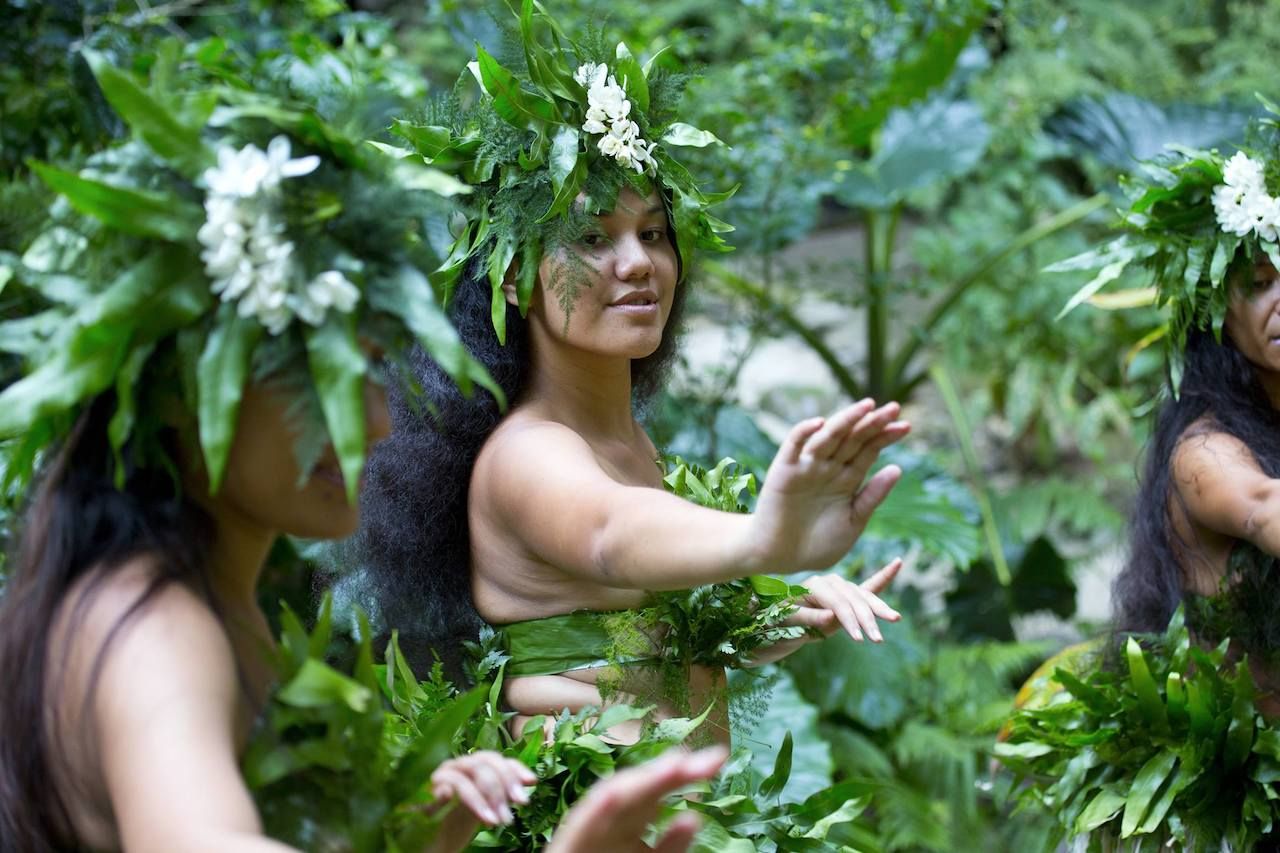 Tahitians throughout history have danced for many reasons — for weddings, to welcome visitors, to honor community milestones. Dance is a joyous expression of the Polynesian spirit of celebration and hospitality. But because of the hip-shaking and exposed flesh of the dancers, European colonizers banned the practice in the 19th century for being too overtly sensual. The tradition wasn’t revived until the 1950s, and its regrowth was slow.

Today, though, Polynesian dancing, by men and women, is once again a cherished part of local life. Dance schools are rife in the islands, specializing in Ori Tahiti — similar to but distinct from Hawaiian hula. Many of them offer one-day group or private lessons at the schools or nearby hotels. Large resorts throughout the islands routinely stage Polynesian dance shows, often as part of a dinner-and-show package. Travelers to the Islands of Tahiti in July are fortunate because they can witness those dance traditions during the annual Heiva I Tahiti competitions, the Olympics of Tahitian dance. Events are held on Bora Bora, Raiatea, Moorea, Huahine, Rurutu, Nuku Hiva, and the main island of Tahiti, where the biggest festival is held.

But dance isn’t mainly about contests.