Near the end of the seventh season of The Office, Michael Scott, played by Steve Carell, announces he’s moving to Colorado from Scranton, PA. He sits on the building’s roof in a lawn chair as Dwight Schrute, played by Rainn Wilson, comes up with a scheme to turn Michael against the Centennial State: feed him the delicacy that is Rocky Mountain oysters.

“Oh these do not taste like oysters,” Michael says, spitting out his bite.

“That’s because they’re not oysters,” Dwight says, smiling. “They’re bull testicles. I cut them off fresh this morning.”

To which there is only one predictable response: “Sick freak! What’s wrong with you?”

It’s an understandable reaction to many — especially in a country where it’s common to buy individually packaged meats that are drained of excess blood from a refrigerated supermarket aisle without ever having to picture the animal or the person who raised and slaughtered said animal. But Rocky Mountain oysters have a long, storied history in Colorado. Today, you’ll still find them served simply across the state: sliced, battered, and deep fried with horseradish sauce on the side. Whether you call them by their most common name or any of the many nicknames (cowboy caviar, prairie oysters, or straight up sliced and fried bull balls, to name a few), there’s no getting around discussing this regional delicacy when talking about Colorado cuisine. 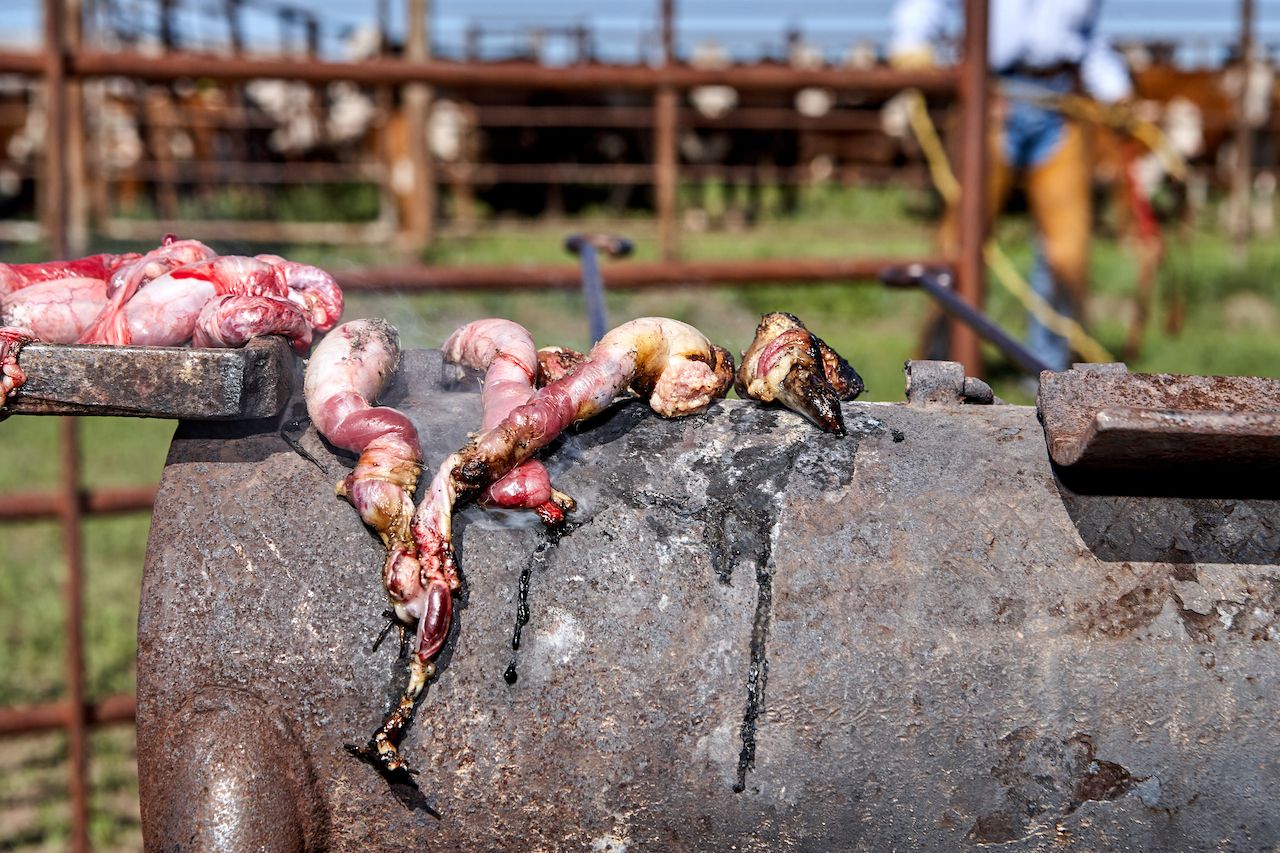 When, exactly, the dish came about is impossible to pin down. People have long eaten all parts of animals, and people around the world turn to frying to make their food taste delicious. One line of thinking is that testicle consumption in the plains comes from a time when it was wrong to waste any part of the animal that could be potential food. Cattle being the primary livestock for much of Colorado’s recent history, the nether regions of a bull were ripe for the picking.

Still, the dish isn’t as famous in Kansas or Texas, or anywhere with a thriving beef industry, for that matter. Rocky Mountain oysters have been labeled a Colorado-specific delicacy, and it’s likely because of publicity and promotion, says William Philpott, associate professor of history at the University of Denver.

“Looking back at the history of this dish in the western United States and Canada, it had a lot of different names,” Philpott says. “In fact, historically, ‘Rocky Mountain oyster’ seems to have been a lot less common name for it. The much more common name in the US, before the mid-twentieth century, was just mountain oyster.”

Philpott says his theory is based on scattered evidence, but all signs point to a certain branding of the Old West Colorado lifestyle. Other regions eat them just as much or more under different names. It’s a prairie oyster in parts of Canada, and a calf fry in Texas and Oklahoma. They’re called ngầu pín in Vietnam and criadillas in Spain and Mexico. Sometimes bull testicles are considered a simple snack, other times they’re thought to increase a man’s sexual virility. In many cases, the delicacy isn’t limited to bulls — sheep, pigs, and other livestock testicles are consumed as well.

Around the 1940s and 1950s, the term “Rocky Mountain oyster” became widely known throughout the US as another name for bull testicles. The Denver Post positioned itself around this time as the newspaper of record for the region. Food columns and human-interest features from well regarded writers like Red Fenwick would position Rocky Mountain oysters “as a dish of state and regional pride, especially the kind of pride that hearkened back to a romanticized old rural West of cowboys and other (primarily manly, primarily white) iconic figures,” Philpott says.

“For many people living in Colorado in those postwar decades,” Philpott continues, “the state seemed to be changing a lot: becoming more urban and suburban; developing new industries that were different from the ranching, farming, and mining that had long anchored the state’s economy; attracting more tourists and other ‘outsiders.’ For someone like Red Fenwick to joke or brag about Rocky Mountain oysters was to mark himself a Colorado native or local, tougher, earthier, manlier, and generally more legitimate than the citified newcomers who were — the stereotype went — horrified by the thought of the dish, too squeamish or scared to even try it.”

Restaurants played a myth-making role during this time as well. Sam Arnold, a food historian, founded The Fort, a restaurant west of Denver, in the early 1960s. He focused on recreating dishes from the days of cattle trails and pueblos, and the popular restaurant came to be known for “authentic” Mountain West cuisine, Philpott says. It helped set Rocky Mountain oysters as a regional specialty, as did other restaurants like the Buckhorn Exchange in Denver.

“That’s my suspicion,” Philpott says. “That the association of Rocky Mountain oysters with Colorado (and the solidification of the terminology itself) had a lot to do with post-World War II Colorado boosters celebrating the dish, holding it up as the kind of thing that defined the ‘real’ Colorado in a rapidly changing West, and also using it (like Sam Arnold) to pique the curiosity of tourists.”

It worked. The dish is still on the menu at many Mountain West restaurants, as well as at Coors Field in Denver in case anyone has a craving while watching the Colorado Rockies play ball. They’ve even made their way into other consumables Denver is known for, like the Rocky Mountain Oyster Stout from Wynkoop Brewing, one of the city’s first modern craft breweries.

Today, Rocky Mountain oysters are in many ways a novelty rather than a serious dish people in the state eat regularly. The dated Mountain West reputation isn’t exactly helping prop up Colorado’s food reputation. As Philpott wrote for the American Historical Association’s magazine Perspectives, Denver cuisine is much more than the meat and potatoes it’s known for. World-class chefs call the city home, and a range of cultures from Native American to Chinese to German to Hispanic New Mexican and much more influence the city’s restaurant landscape.

Rocky Mountain oysters are just one facet of Colorado cuisine. Still, you can’t deny the position that fried testicles have in Colorado lore. The world will never know if the character of Michael Scott tried true Rocky Mountain oysters once he left The Office for Colorado. If you’re ever presented the chance, however, you should try a taste of what is, for better or for worse, a Colorado delicacy.

Restaurants + BarsWhat To Eat in Denver, According To Denver’s Best Chefs
Tagged
Food + Drink Colorado, United States
What did you think of this story?
Meh
Good
Awesome