The term “glamping” almost sounds like a snide put down from hard-core backpackers towards bougie people in nature.

“Oh, they got BATHROOMS at that place?” a salty, grizzled hiker might say. “That’s not camping. That’s glamping!”

But you know what? Sometimes it’s nice to take a hot shower, sip a couple glasses of wine, and retire into 1,000-thread-count sheets at the end of a long day of outdoor activity. And if that means people who don’t mind going a week without changing t-shirts look down on me, then so be it.

And for families, it’s exponentially easier to expose your kids to the great outdoors when you don’t have to convince them sleeping on an anthill is “fun.” So as you plan your summer vacation, we put our heads together with Pitchup.com, a site that specializes in finding glamping hotspots, to find nine glamping resorts you should seriously consider booking. 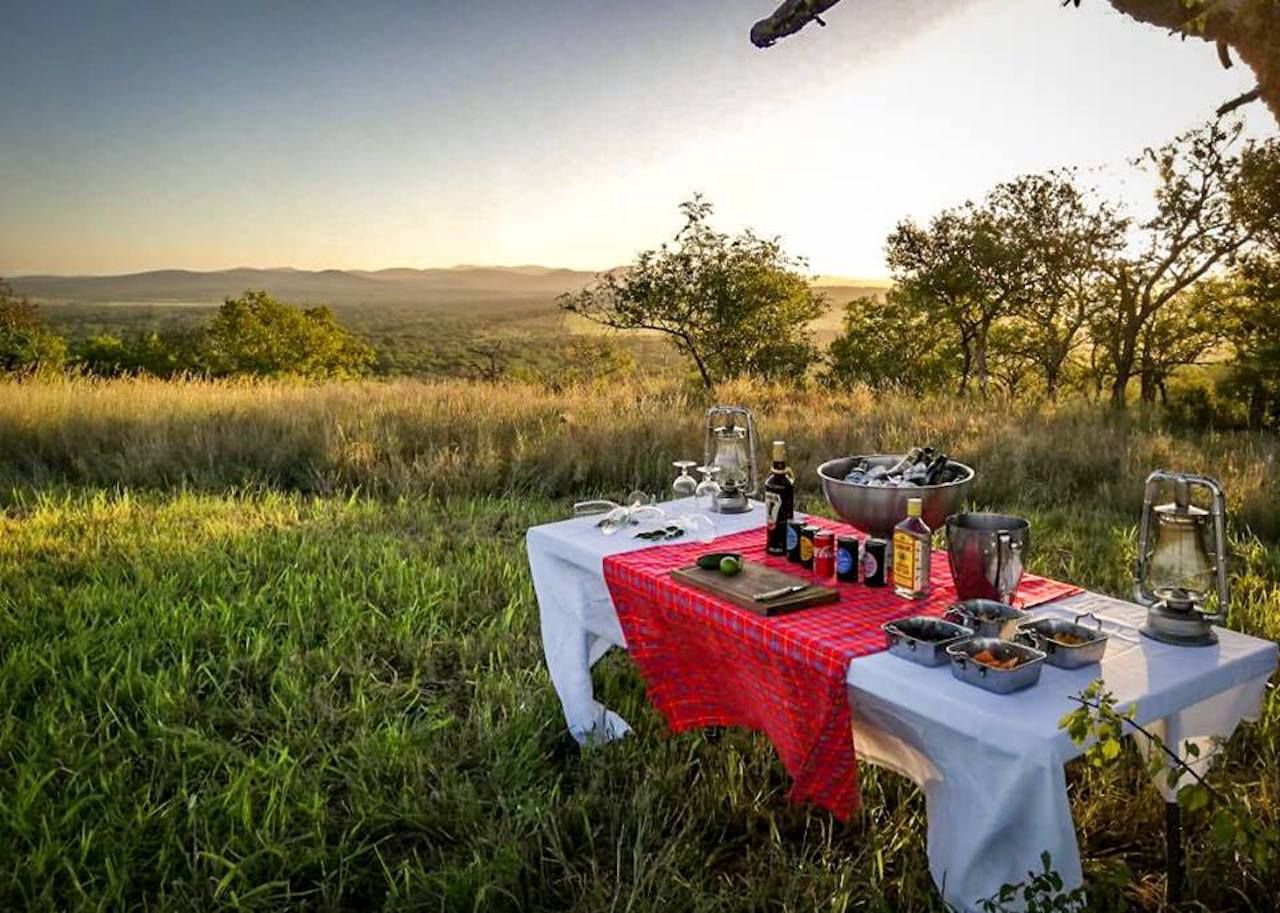 See enough pictures of the Four Seasons glamping safaris and you’d get the impression luxury African wildlife treks are only for those who can afford thousands of dollars a night. But spend a few days in the intimate confines of Rhino Sands, and you’ll see that dream vacation is a lot closer than you think. For just under $375 per person, per night, you’ll get a private, netted tent complete with stand-alone tub and outdoor shower, plus a private plunge pool to cool off during the hot days.

You’ll also get private rides through the Manyoni Private Game Reserve, where, unlike in bigger parks, you’ll see only one or two other jeeps per day. After getting closer than you ever thought possible to giraffes, zebras, elephants, and cheetahs, you’ll retire to a gourmet meal and fireside cocktails, all included in your rate. It’s still not cheap, mind you, but allows you to live like a millionaire for a few days without selling everything you own. 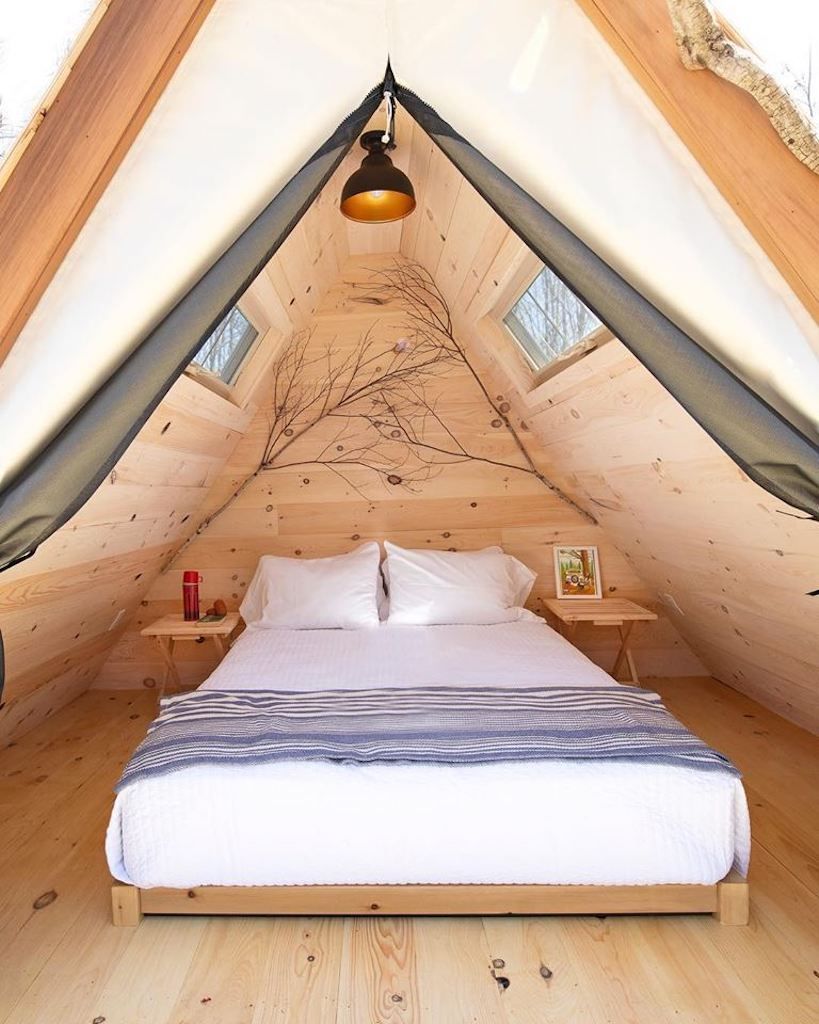 America’s coolest collection of glamping lodgings is found along the waters of Kennebunkport at Sandy Pines, which might sound a little like an ill-fated South Florida TV retirement home but is nothing of the sort. The options at this resort run from the Zephyr, an Airstream trailer outfitted to look like 1960s Hollywood on the inside, to the Wild Blue Yonder covered wagons, which let you live like pioneers — if pioneers had air conditioning and power outlets. You can also literally live in a glass house, provided you don’t say anything bad about anyone, or in a 13-foot glass dome. In addition to its unique sleeping quarters, this summer Sandy Pines will also offer a carnival in mid-July and National ‘Smores Weekend August 9-11. 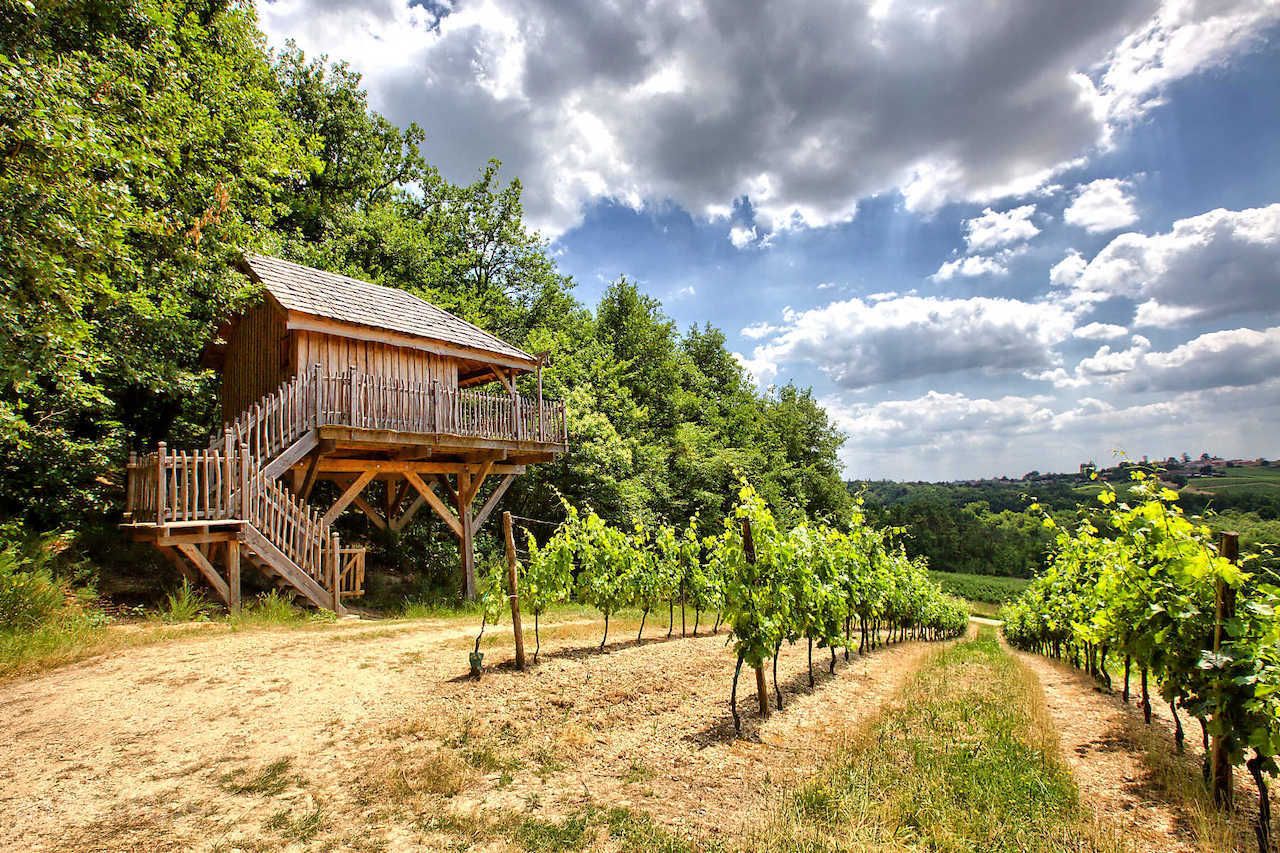 Combining one of the great joys of childhood with one of the great things about being an adult, these treehouses in the French countryside are set smack in the middle of wine country. Not just in an area near some vineyards but literally right over the grape vines. As you’re tempted by the vines at your feet, you can tour the nearby wineries in Saint-Émilion and Sauternes, then bring back a bottle to enjoy on your porch. If wine tasting gets old, you’re also only a short drive to swimming, golf, horseback riding, and the castles of Entre-Deux-Mers. 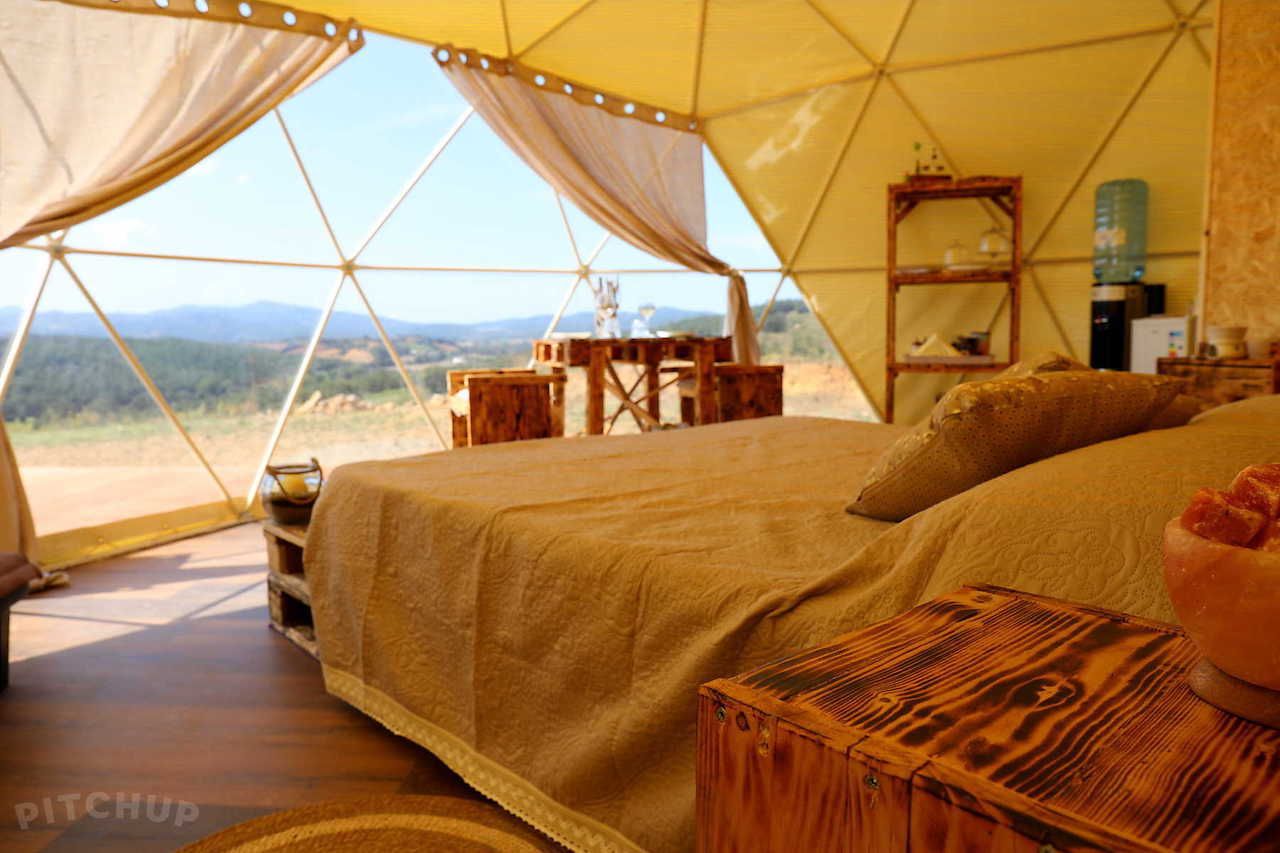 Food tours of Tuscany don’t need to be gluttonous affairs. You can also enjoy farm-fresh Tuscan food from inside a geodesic dome, set right on a working farm. At Il Sole, each day you’ll wake up and look out your glass walls to a lush Italian hillside, filled with olive groves, orchards, and pastures. After enjoying a meal of food from your surroundings, you can tour the nearby Chianti wine region or head down to the Maremma Coastline to get your fix of the Med. For those who don’t want to be woken early by the Tuscan sun, Il Sole also offers yurts with full walls and a little more shade. 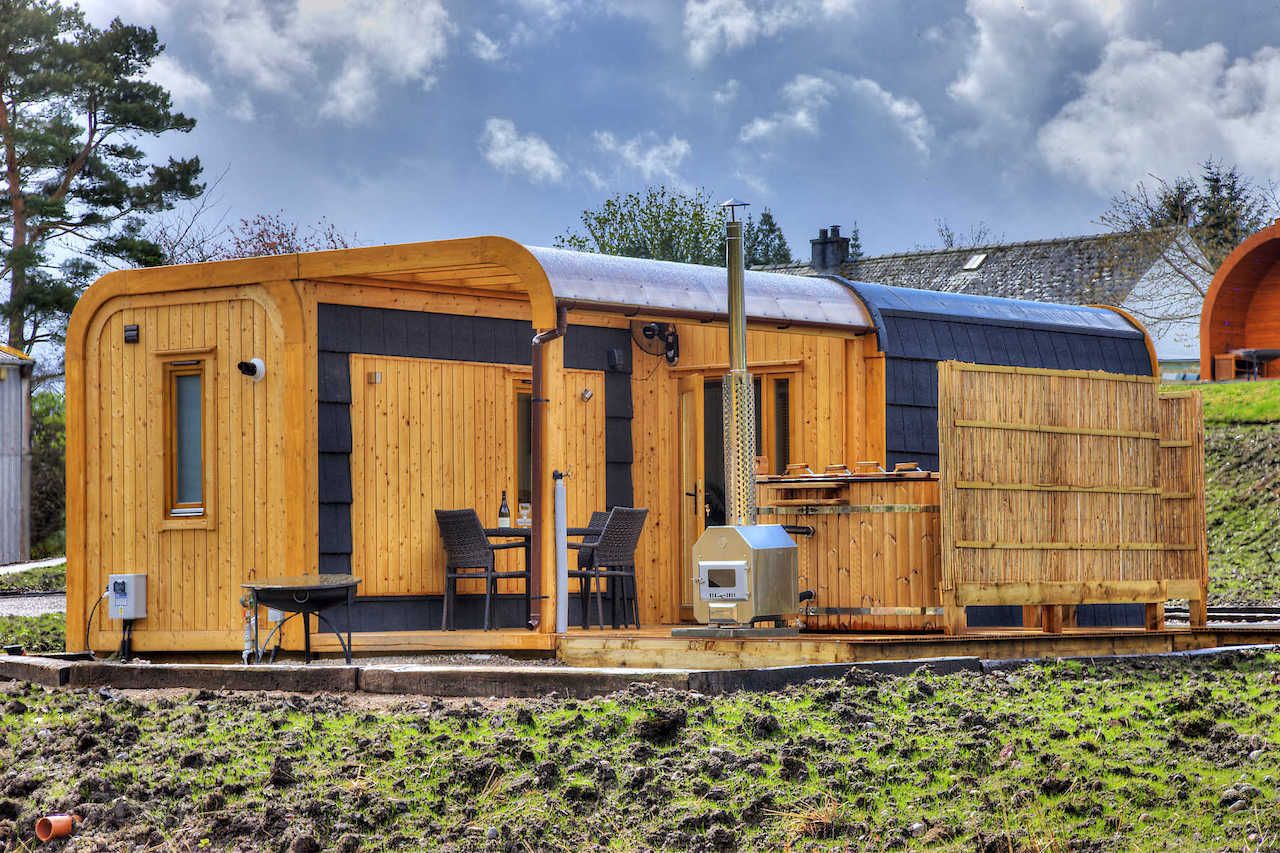 You may recognize the name of this hilly Scottish beach town from the whiskey of the same name. But locally it’s equally known as a spot for a quick weekend holiday, where the dark sands of Tralee Bay Beach are only about 400 yards from this modern glamping resort. The property sits on seven acres, where little mini-lodges sit tucked behind grand trees, almost hidden from the view of anyone on the water. Some have porches that lead right down into the bay, and all have private, wood-fired hot tubs and fire pits, so you can enjoy the stars while staying warm at night. The mini-lodges are decked out in plush, colorful furniture and light woods, with a beach house ambiance despite the cooler temperatures. Plus, the resort sits across from a farm park with animals and pony rides for your kids. 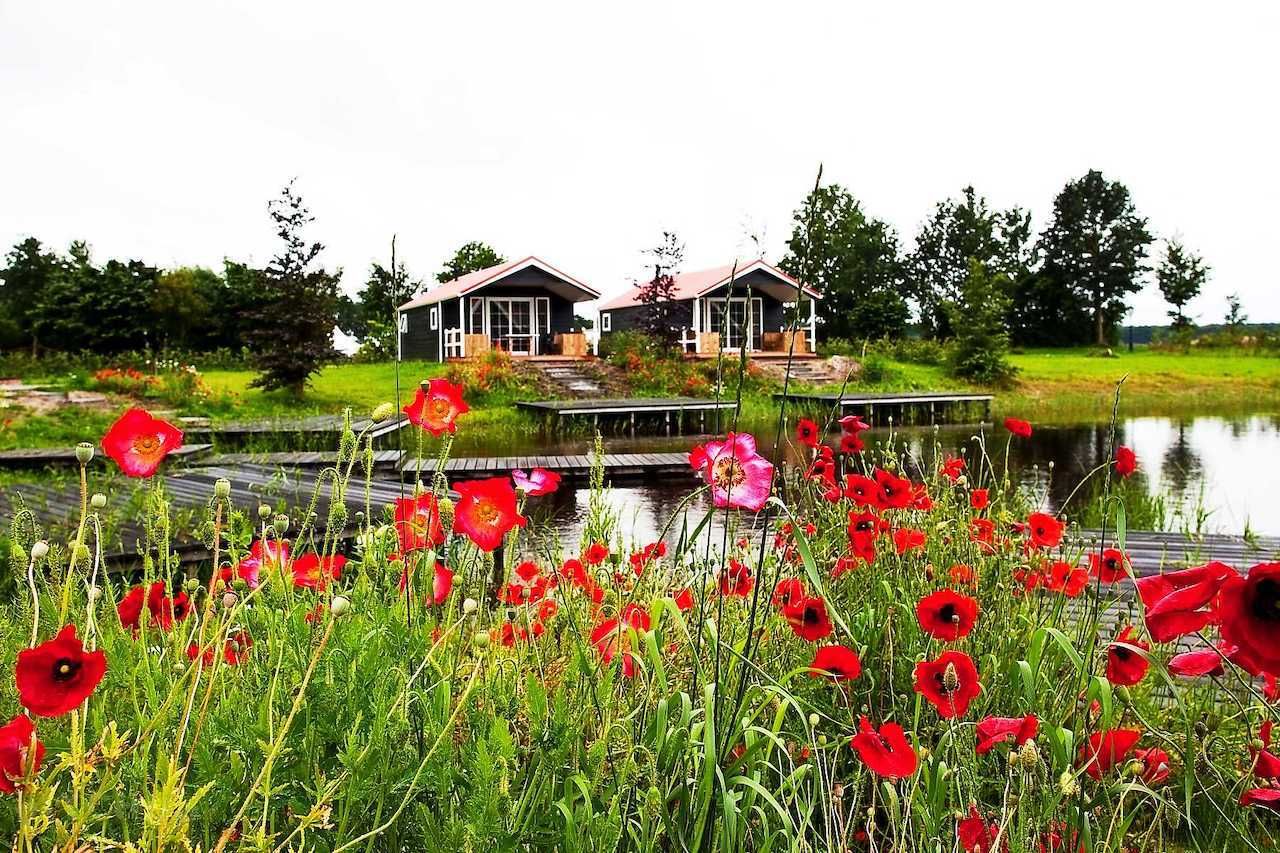 Holing up in a traditional Dutch A-Frame house is the stuff of European vacation fantasies, and it’s easily accessible at this park set around a series of lakes in Bant. Set in a sprawling agricultural area full of colorful tulip fields, the Vakantiepark Eigen Wijze has both two-bedroom lodges and three-bedroom safari tents set around small lakes like a Dutch village. Since your little ones might not be as entertained by flower-gazing as you are, the resort also offers go-karting, trampolines, tennis, and a pirate ship. 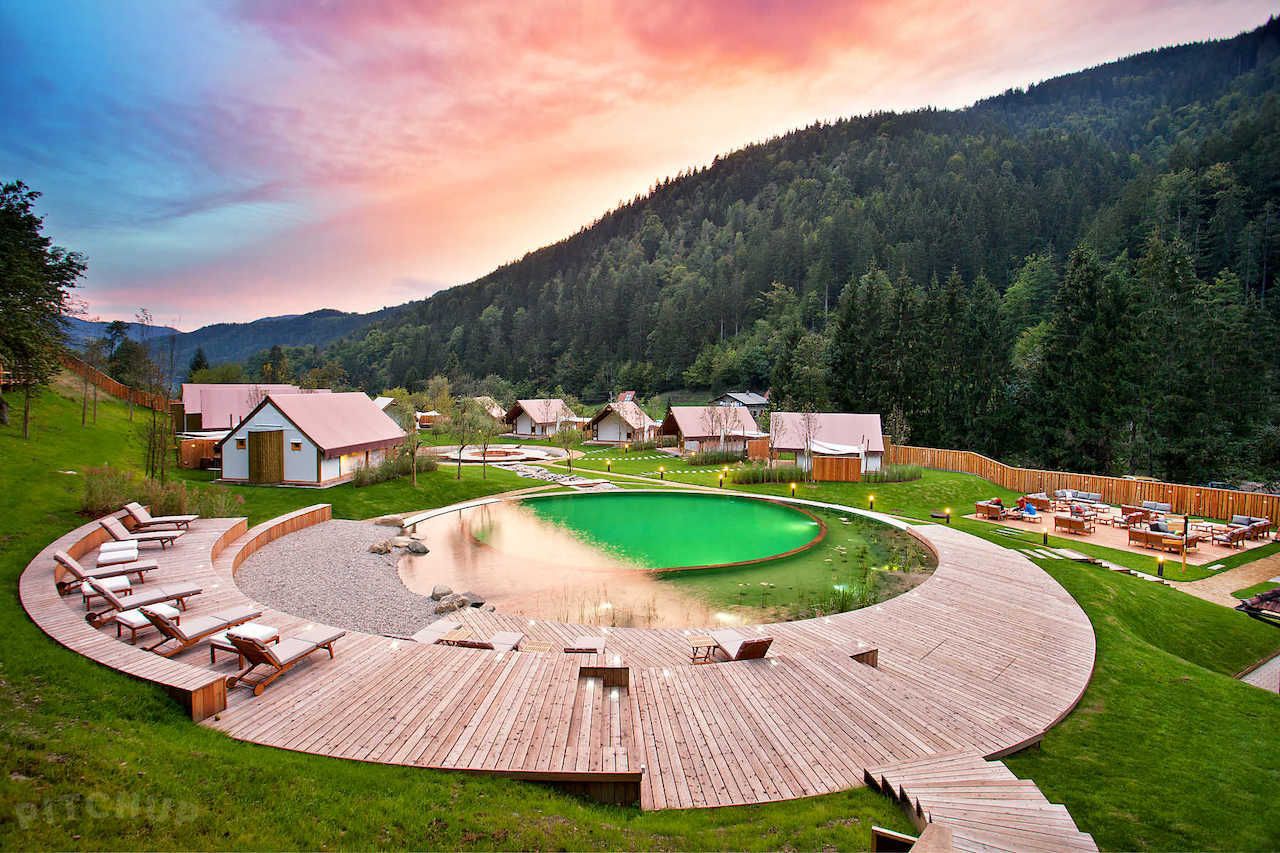 Slovenia seems to be the Eastern European hotspot du jour, and though it does lack any actual wild game preserves you can have the pampered safari experience at this green mountain resort. Each six-person tent is supported by thick beams and rich, dark-wood furniture set under white canvas tops. They also each have private saunas and herbal-scented pillows, using the same local herbs you’ll find in everything from the food to the tent’s scent. There’s also communal sauna to relax in after a long day of hiking the hills near the Savinja River, which butt right up to the pool deck. You’ll also get a hearty breakfast included every day, as well as access to fishing, biking, and an herbal pharmacy. 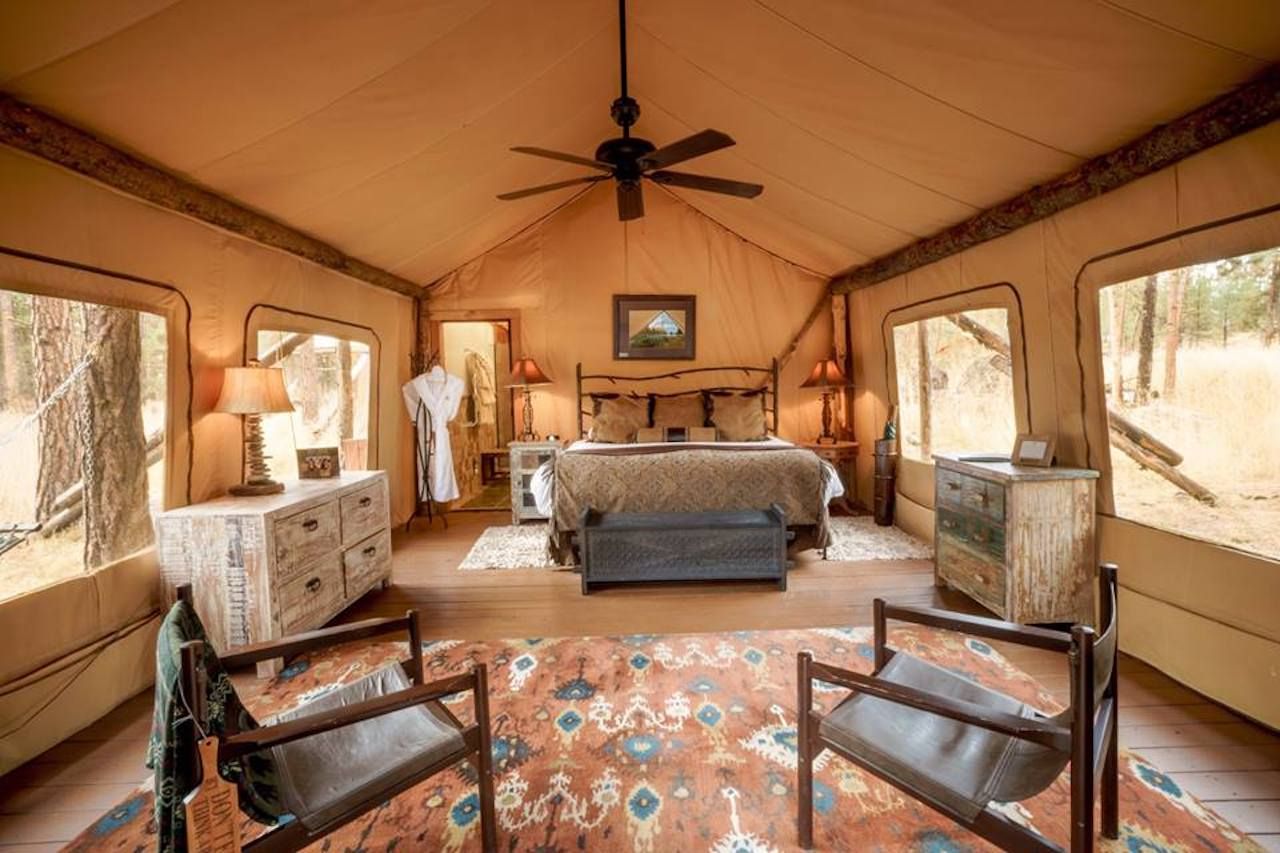 Photo: The Resort at Paws Up/Facebook

Since “glamping” is a relatively new term, few know that one of the original spots to offer upscale roughing it was Paws Up in Montana. Since 2005, this resort on 37,000 acres in Montana’s striking Blackfoot Valley has offered safari-style tents under the big sky, with private butlers, heated floors, air conditioning, and bathtubs big enough for two. The resort employs its own executive chef too, who this year will be offering Paws Up’s first Montana Long Table event, a throwback to chow halls of the old west with a farm-to-table twist. June 13-16, you’ll be able to dine on gourmet meals crafted from local ranchers, farmers, and beverage-makers at night, and peruse a local farmers market onsite during the day. 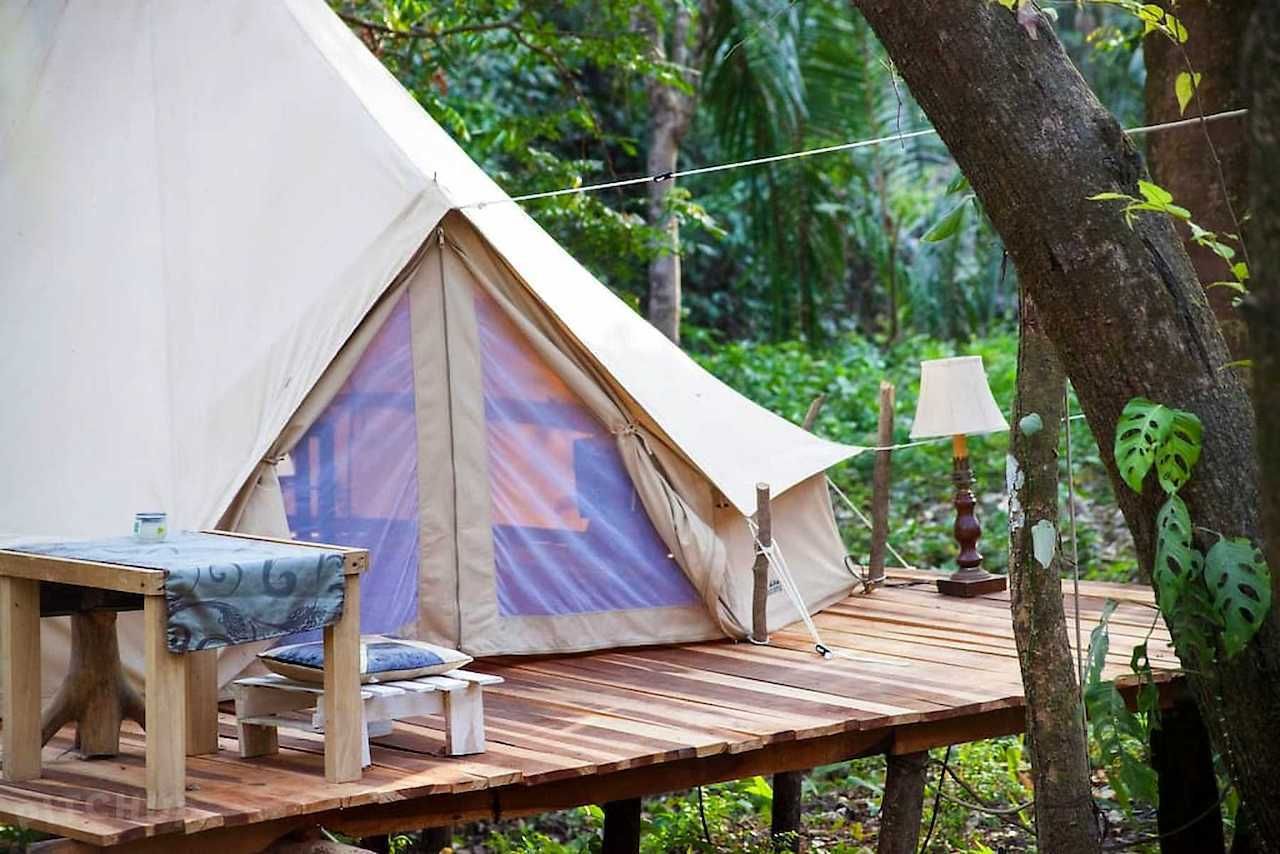 Taking a trip through the jungles of Costa Rica doesn’t mean sleeping on wet muddy floors, or in remote, not-so-modern hotels. Nor does visiting the country’s famous coastline. Rather, you can get both your rainforest and beach fix in sheer glamping comfort by staying at Bar’coquebrado. The resort is a beautiful 20-minute walk from Barco Quebrado Beach and its majestic cliffs and destination surf breaks. Plus, your plush tent is covered in Persian rugs and fine linens, allowing you a good night’s sleep after a rough day traversing the jungle/ocean.

CampingGlamping Experiences Around the US for Campers Who Hate Roughing It
Tagged
Camping Epic Stays
What did you think of this story?
Meh
Good
Awesome