The Midwest tends to get a bad rap in the travel world. Even when publications aim to tout it, a backhanded slight is rarely far away — take Vogue’s write-up on Kansas City, for example. The first four paragraphs amount to “Where? Mississippi?” underscoring the idea that a Midwesterner’s ignorance is intolerance but coastal ignorance? Well, that’s just cute and relatable. The Washington Post sums this phenomenon up nicely with its “You’re Going Where?” series, though it’s kind enough to include places like Raleigh and Boulder.

The hero-goes-on-a-journey structure serves this trope well: Our lone, daring protagonist armed with nothing but fortitude and a pen treads warily into flyover country, making headlines with his or her claim that, as it turns out, decent craft beer is not a high-rent privilege. But those who believe Kansas City “lives differently” or that Fargo has no streetlights are about to have their worldview shattered in two words: Grinnell, Iowa. This town, population 9,027, is the most badass — and overlooked — destination in the state, and perhaps all of the Midwest. Here’s why you need to pull off I-80 to check it out. 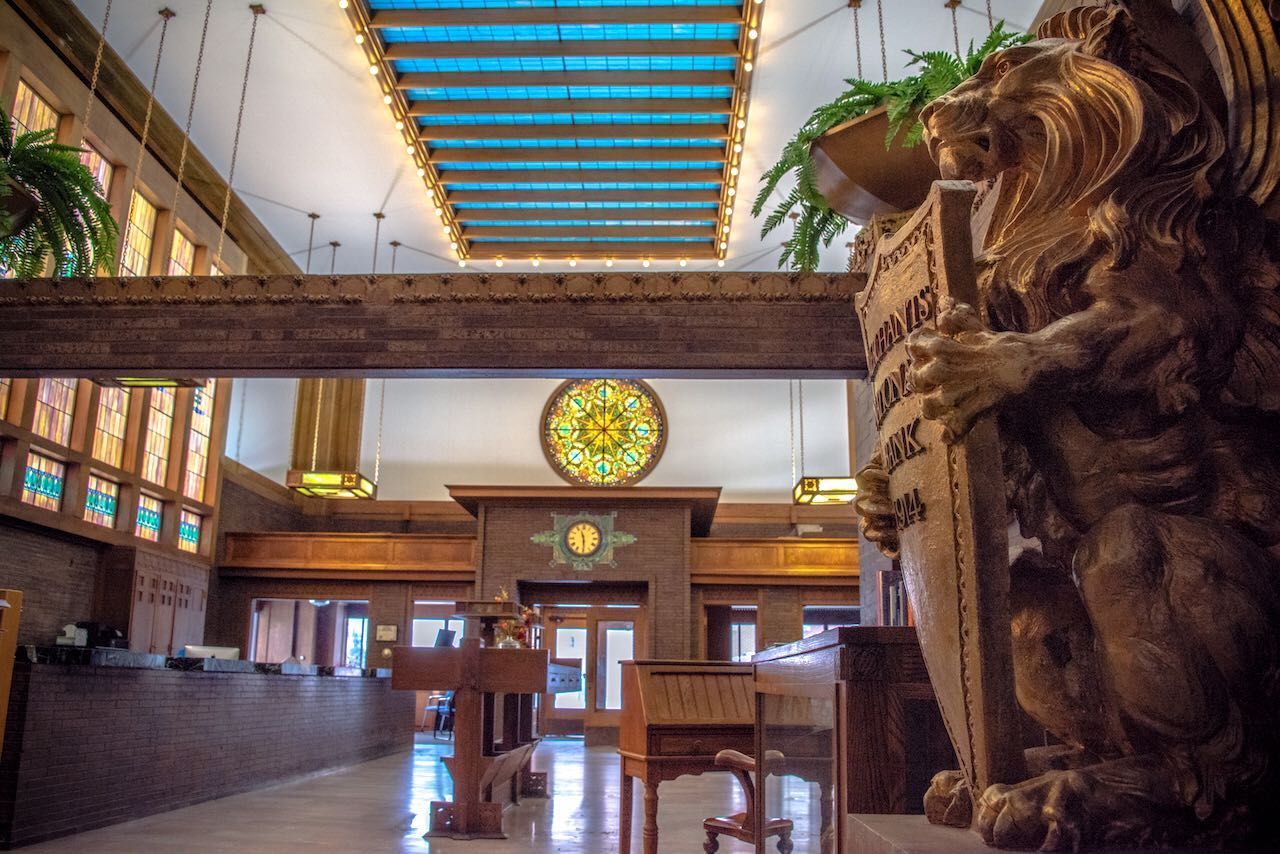 Grinnell is about an hour east of Des Moines, Iowa’s capital city. Just like in nature, Grinnell seems to be subject to the “edge effect” in which two vastly different environments collide. It’s home to both Pete Brownell, former president of the board of the NRA, and a recent 26-day protest for gun control. It’s a farm town with a bustling Monsanto plant that also has a wine bar that passes around cheeky Putin-Trump greeting cards. You can dine at an upscale New York Times-reviewed restaurant or nurse a cheap cup of coffee over a newspaper at the Frontier Cafe.

If you’re familiar with Grinnell, it’s probably due to the college. In addition to its $1.8 billion endowment, one of the largest in the country, it’s among the top-rated liberal arts school in the nation. The average ACT score is 32, leading to its handy moniker The Harvard of the Midwest. And that’s not even mentioning the basketball team: They’re one of the highest-scoring college teams around (this year’s average was 118 points), and they currently hold the NCAA record for the highest scoring player in a single game (137 points). Their run-and-gun style, otherwise known as the Grinnell System, is controversial — and a hell of a lot of fun to watch.

Basketball games are free as are most events in Grinnell. This is on purpose, and you can consider it part of the town’s intrigue. 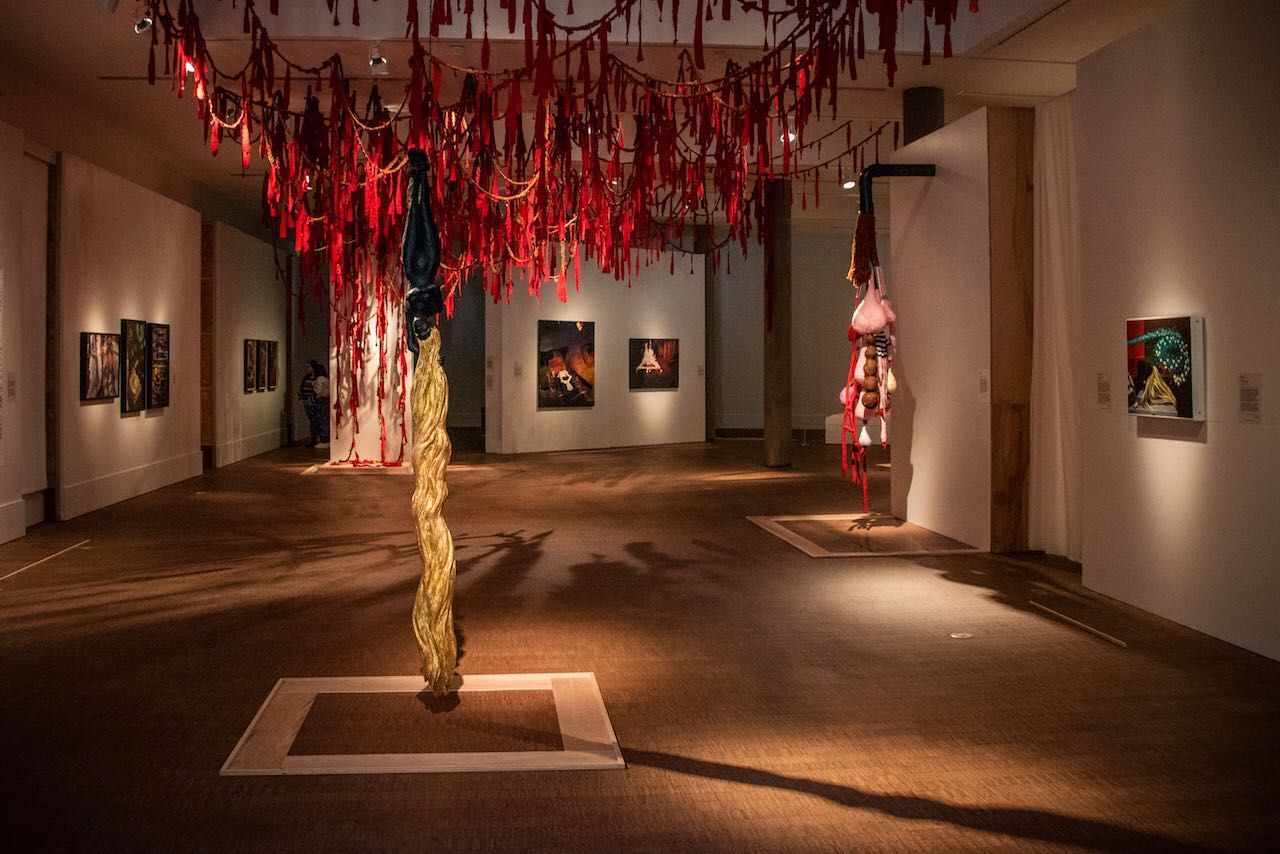 Grinnell’s motto is “The Jewel of the Prairie,” and while that sounds like a slogan you read on an old painted sign on the edge of a field, in this case, the claim’s backed up. The phrase refers to the Louis Sullivan Jewel Box Bank in downtown, a National Historic Landmark that now serves as the visitor’s center — a fitting place to kick off a trip. Architecture fans will recognize Sullivan as the “Father of Skyscrapers,” the man behind Chicago’s Sullivan Center and Buffalo’s Guaranty Building. The jewel design in the stained-glass centerpiece can be found all over town, wherever you can imagine a logo being covertly placed.

Less than a block from the bank is the Grinnell Arts Center. Currently, there’s an exhibit on the incredibly cool Cornelia Clarke who was both a nationally known nature photographer in the 1920s and an Iowan. The center also runs The Stew, a collaborative art space with a maker’s lab, garage, and concert space. Visitors can pop in here whenever though the busiest times are when a Local Artist Market is in full swing.

The piece de resistance is Grinnell College’s Faulconer Gallery, widely known as one of the best small-town art galleries in the country. Right now, you’ll walk into Dread & Delight: Fairy Tales in an Anxious World. It takes all of the stories you know and love and shines a light on their darker sides, calling out misogyny, racism, and homophobia as the villains we cannot escape rather than witches and wolves. Despite the town narrowly voting red, the louder voices here seem to be rainbow, as colorful signs that boil down to “Everyone is welcome here” dot the downtown. 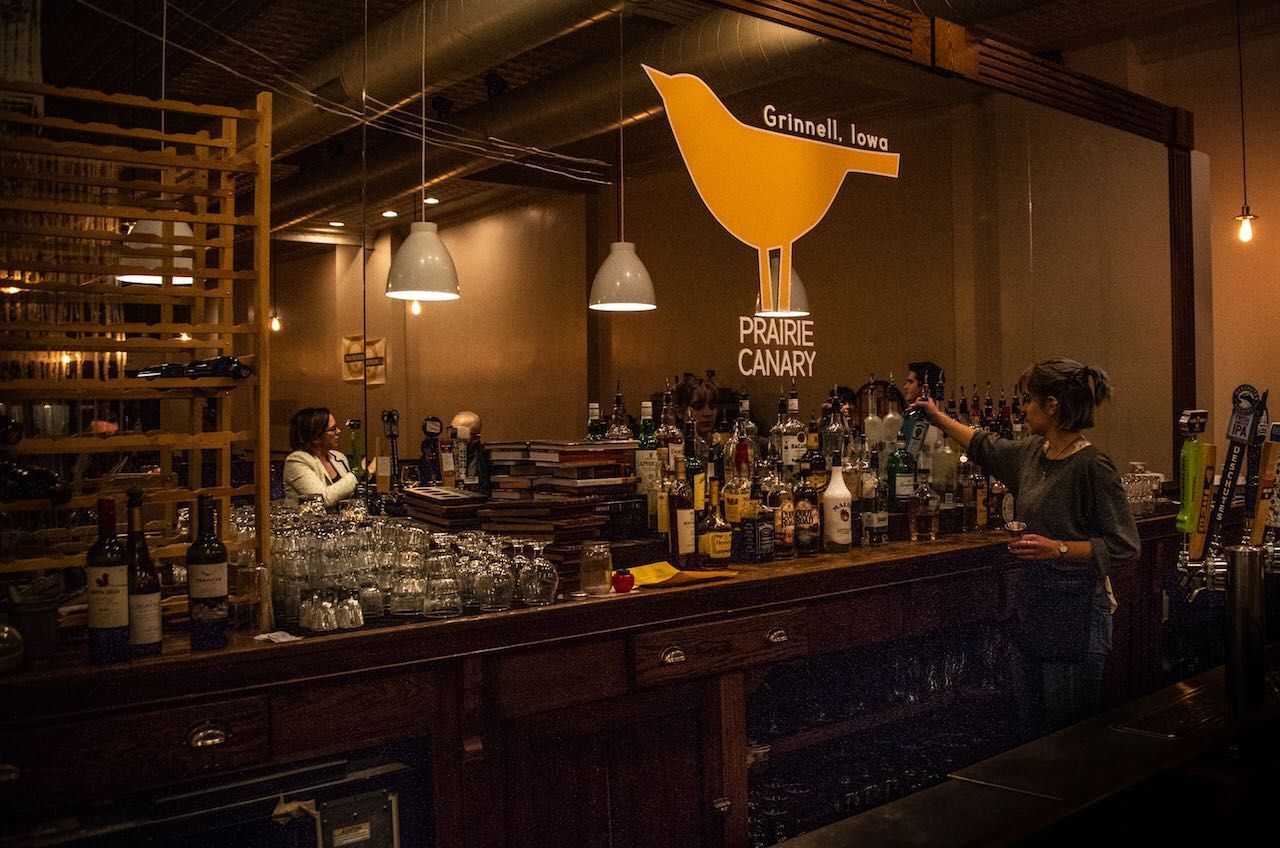 Once you arrive in town, hike it to Peace Tree Brewing Co. ASAP. Not only is it female-owned, but its famous Blonde Fatale took the Gold Medal for Belgian-Style Ales at the 2014 World Beer Cup. Their website reads, “Our hope is that the beer made under the Peace Tree label will be shared with friends and strangers alike and act as a catalyst for conversations, new friendships, and important agreements — in line with the lore of the Peace Tree of Red Rock.”

For dinner, you have two headlining choices: Prairie Canary and Relish. The former — your downtown, urban, also-does-brunch option — had a write-up in The New York Times spotlighting its (again, female) head chef, the town’s international population, and the need for both down-home comfort food and eclectic, inspiring, out-of-the-box dishes, all sourced from local suppliers. If you get a burger, let me save you from asking the staff how to eat it: You smash it, cut it in half, and pray.

Relish, on the other hand, is open only for dinner. The giant yellow Victorian is almost out of place for its grandeur, but the town is littered with 1900s beauts — and it’s an apropos space for local food with a sophisticated, global bent. Iowa beef, for example, anchors the Egyptian Beef Stew. Small town assumptions be damned.

If you’ve got time and room afterwards, don’t miss a stop at Solera. It’s the aforementioned wine bar with excellent taste in postcards. The owner, Colleen, routinely goes around asking who would like a fresh-out-of-the-oven chocolate chip cookie. It would seem strange, apart from the fact that customers are talking to each other from opposite ends of the bar, and save for said bar, you might think you’re in Colleen’s house — photos of political figures photoshopped with friends’ faces very much included.

Places to stay in Grinnell, Iowa 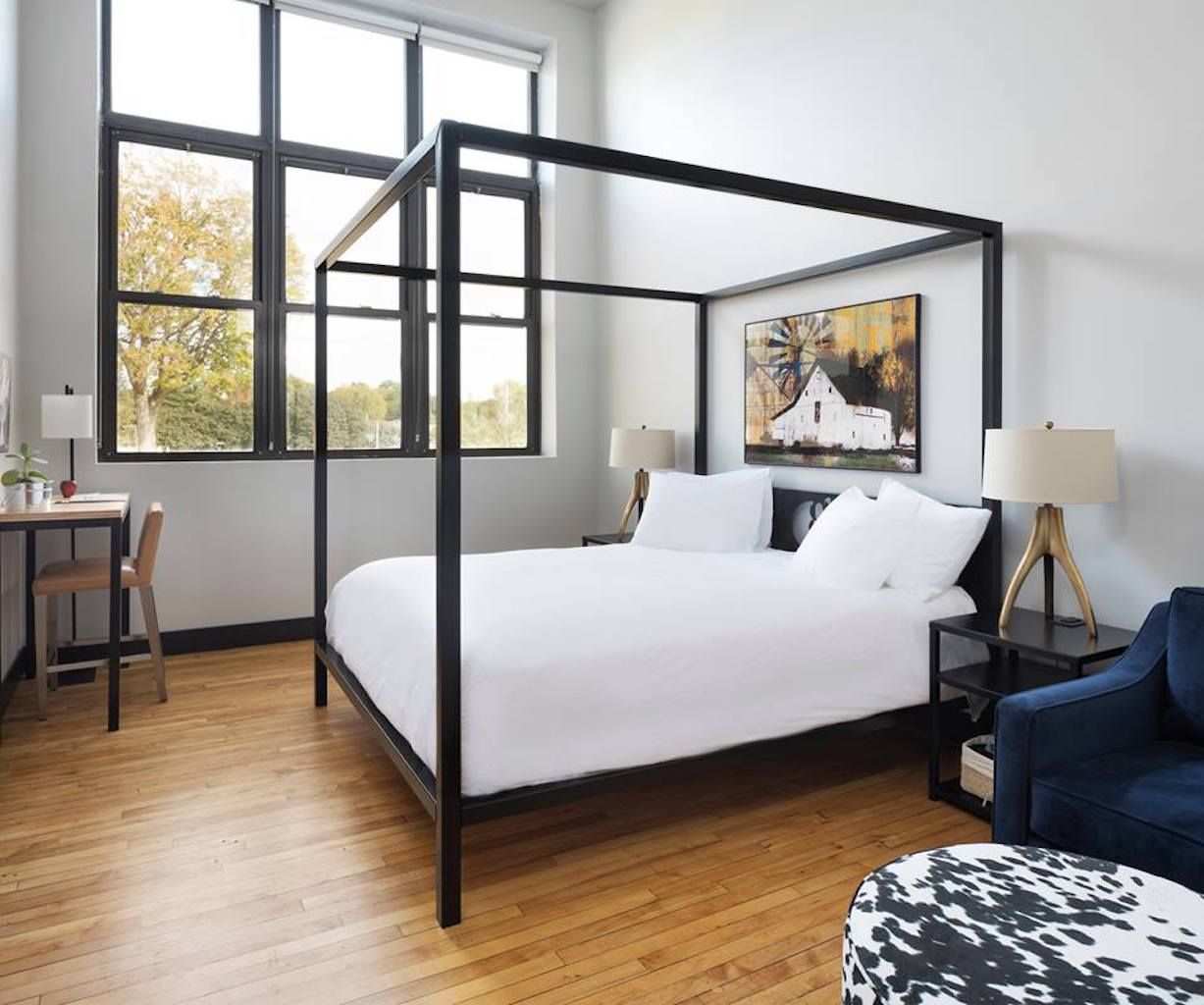 There’s only one name in the downtown hotel game, and that’s Hotel Grinnell. You wouldn’t want to stay anywhere else anyway. It’s a boutique hotel remodeled from a giant junior high school, and as they say in Kinky Boots, “It’s not what you change in a renovation; it’s what you keep.” The rooms have chalkboards while the Periodic Table — the hotel restaurant — displays the old gym scoreboard. Bikes for rent dot the main hallway, the theater’s fly space has been turned into a loft, and old locker rooms are now bunk rooms that lend themselves to kids’ (or adults’) sleepovers. There’s a huge fire-lit patio for drinks after a day of exploring downtown, hitting up nearby Rock Creek State Park, or one of the two small lakes in town.

Most places you’ll visit are within walking distance of the hotel save for the campus — though that’s doable on a nice day or with one of Hotel Grinnell’s bikes. For more things to do and to check it out yourself, visit Get Into Grinnell or literally send them an email. One of the 9,027 people will actually get back to you.

TravelThe 25 Coolest Towns in America: 2019
Tagged
Culture Insider Guides
What did you think of this story?
Meh
Good
Awesome