There’s a place high up in the Rocky Mountains of Colorado where you can actually live out that crazy Halloween dream (or rather, nightmare) that creeps forward each October. A place where you can feel the spirit of REDRUM-inspired paranoia hanging in the air like a curse: Estes Park. A small mountain town about 90 minutes outside Denver, Estes Park is the perfect spot to actually celebrate Halloween, not just put on a sailor hat and get faded on jungle juice at a house party. Most famously, Estes Park is home to The Stanley Hotel, which inspired Stephen King’s novel The Shining, iconically brought to the big screen by Stanley Kubrick. The hotel stands as a dramatic and intimidating backdrop to Estes Park; you’ll want to start there — but there’s more to Halloween in Estes Park lurking around the corner.

Get your freak on at The Stanley Hotel. 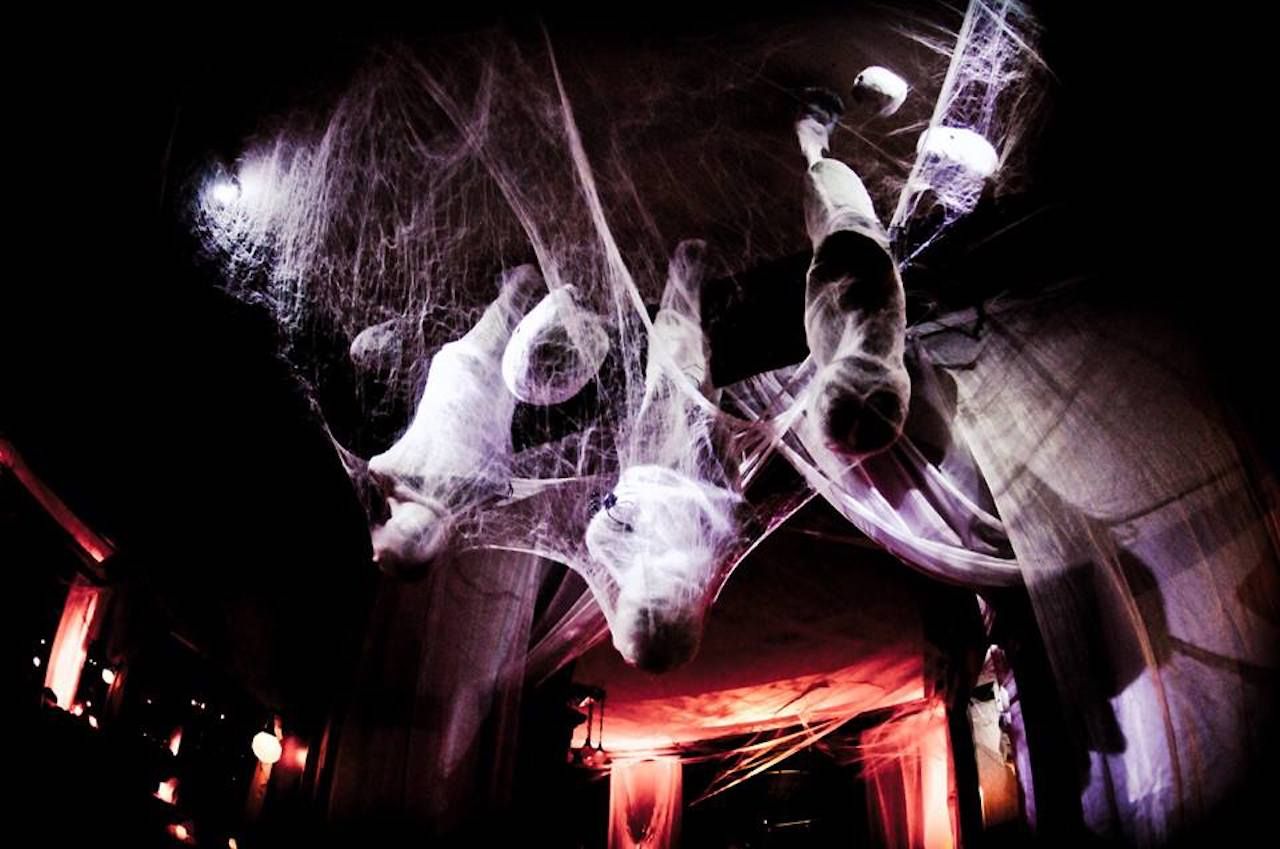 There are haunted hotels around the world, but there’s only one Stanley. Show up with your game face on because once you’re here, the vibe is freaky from the moment you pull into the parking lot. The hilltop building towers over the town like an overlord staring down discouragingly at his minions, itself a formidable presence, but the most unsettling aspect of the approach is that you’re greeted by the infamous hedge maze based on the scene where Danny Torrence narrowly held onto his life in the film. No one will blame you if you look over your shoulder as you walk in the front door. Once inside, you should probably head straight to Whiskey Bar and calm your nerves over a stiff drink. 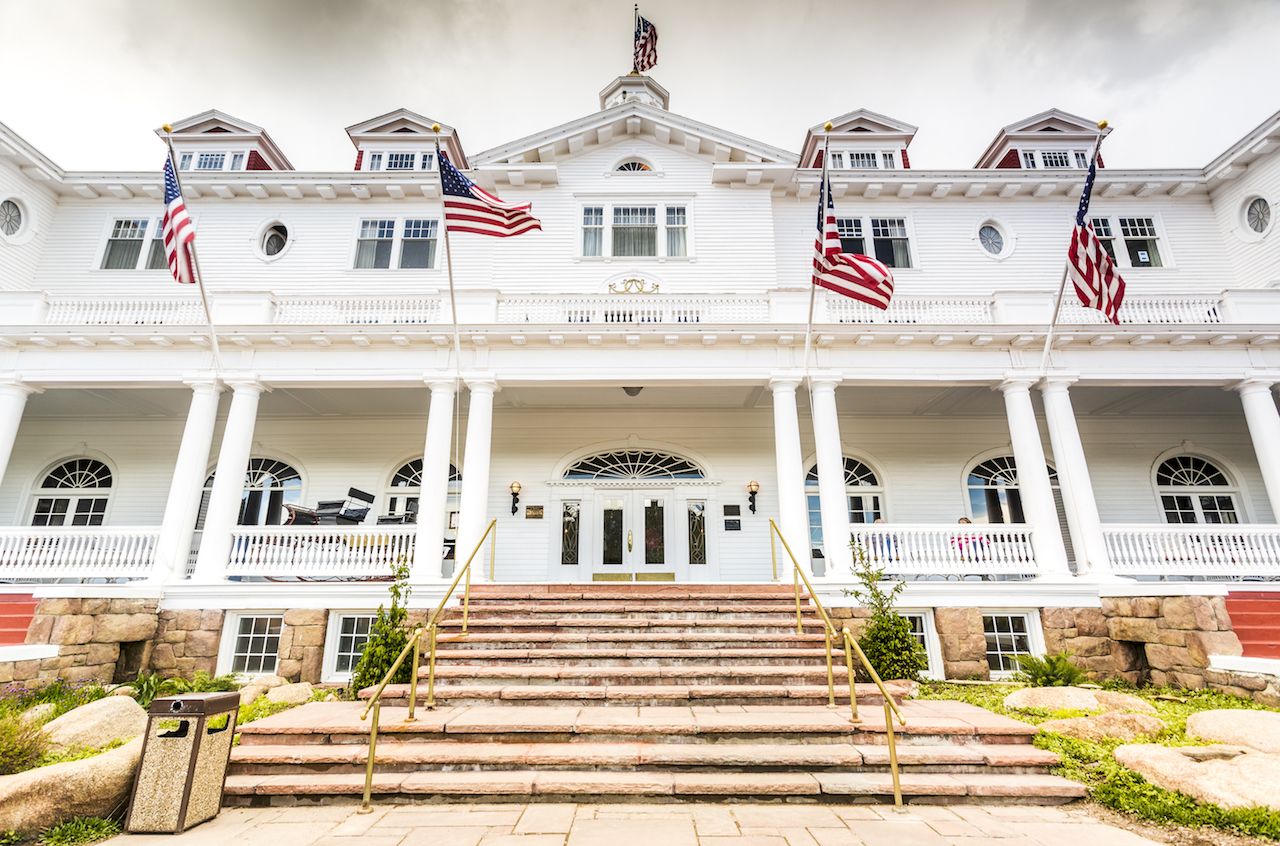 If you aren’t freaked out by a raucous, blood-red cocktail party, score a ticket to the hotel’s annual Halloween Masquerade Party ($119) or Shining Ball ($159). Both are lined with costumed revelers who can’t quite seem to get that possessed look out of their eyes, so you’ll fit right in as long as you dress the part. Even if you don’t make it to one of the parties, the hotel offers multiple nightly tours of the grounds and its most haunted spots. On the Historic Stanley Tour ($28), you’ll be led through the hotel and shown where many of the story’s memorable moments took place, getting the rundown on the facility’s legacy both pre- and post-Shining.

The Night Tour walks you through several supposedly haunted rooms and nooks and crannies throughout the hotel, and it’s generally filled with anxious tourists ready to shriek in terror the moment the lights dim — the type who find themselves more rattled by campfire ghost stories than six-year-olds. There’s also a Murder Mystery Dinner for problem solvers. You can meander much of the property by yourself though you might not be able to make it up to any of the main sights unless you book a room for the night. Unfortunately, room 237 is booked out on Halloween for years to come — but you can still take a selfie in front of the door. As a consolation, The Shining plays on repeat on the TV in every room, so you’ll still get the effect.

Dress up and head downtown. 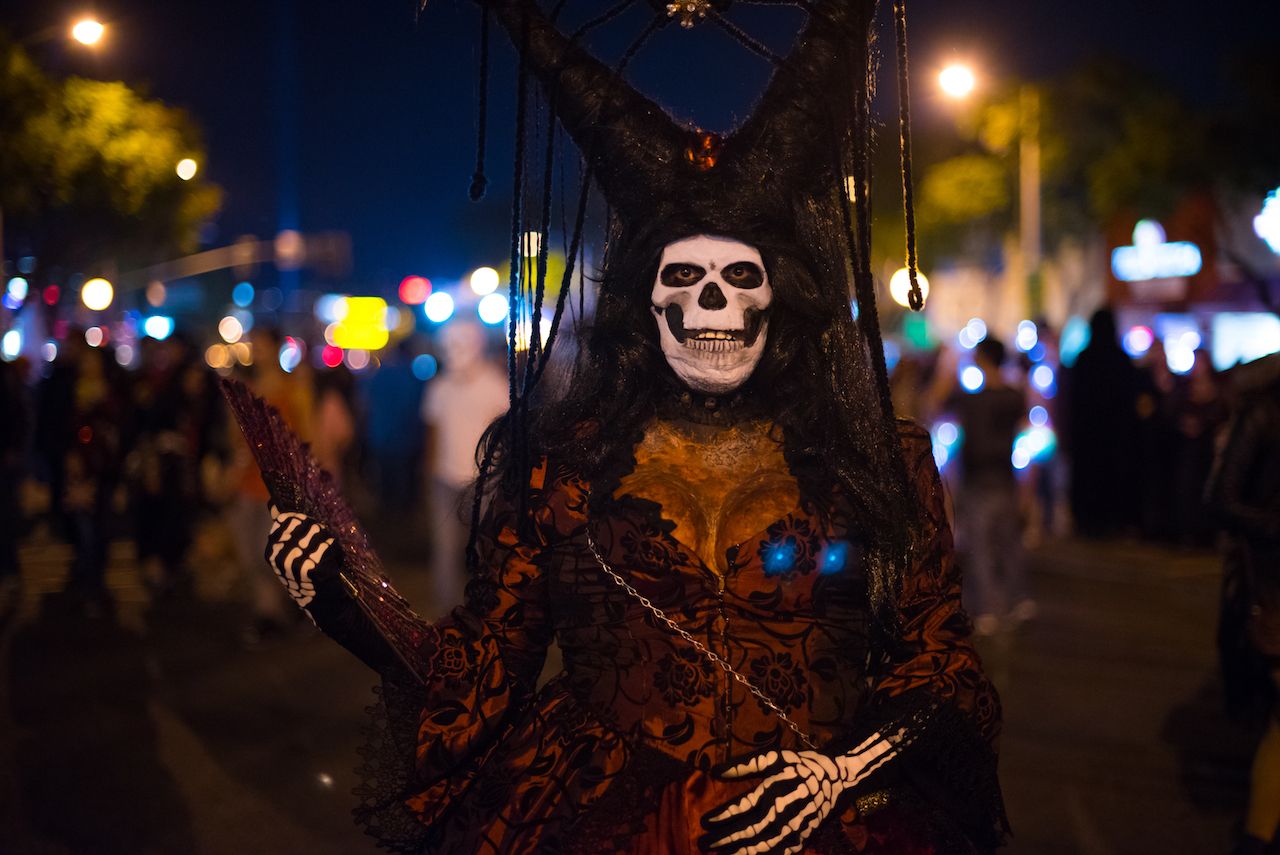 The streets of Estes Park are lined with action on Halloween weekend. The city shuts down Elkhorn Avenue from car traffic on Halloween itself for the annual kids’ parade, which takes place in the early evening. This is the perfect opportunity to dress up and make your way downtown even if you don’t have kids because the street party lives on long after the family crowd heads home in the early evening. You should definitely go all out with your costume — there is absolutely no way you’ll be the weirdest dressed. Everyone is doing it, and if you own it, odds are you’ll land yourself a free drink or two. The party tends to center around The Barrel, an outdoor pub right downtown on Moraine Avenue, but because the entire town can’t fit onto one patio, the whole of Elkhorn and Moraine Avenues are packed. Wheel Bar and The Slab are hot spots, as well. Restaurants and bars up and down the city center fill up with visitors and locals, with celebrations going until last call.

Hike with a spirit at Carter Lake. 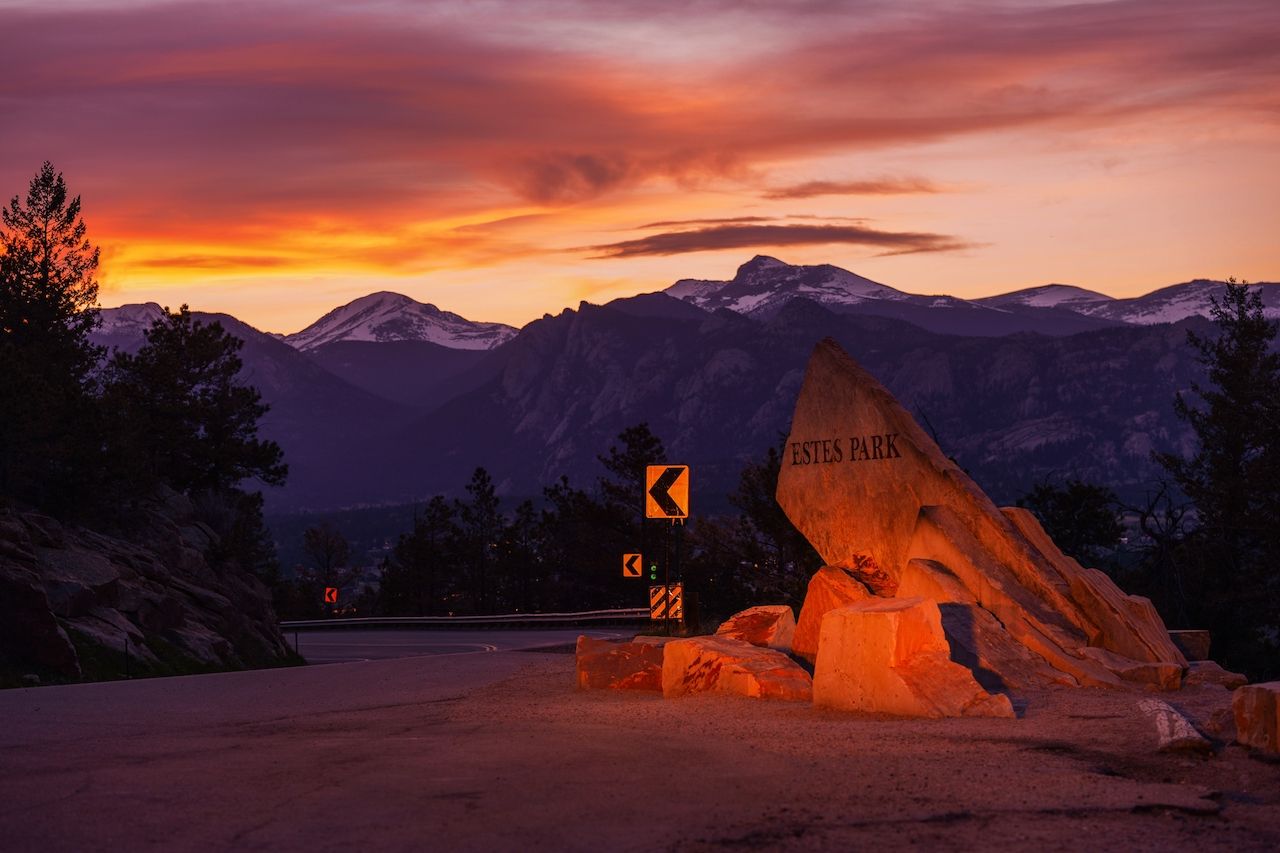 These days, he’s known only as Mr. Bennet after the street on which he was killed. This man, a settler of the area about 30 miles east of Estes Park around Carter Lake, was murdered as the result of a land dispute more than 100 years ago. The crime is confirmed, but many around here will tell you that Mr. Bennet never left. Legend has it that he now walks along the trails of Carter Lake, dressed head to toe in the style of the era and carrying a bag with his belongings. Multiple people have reported sightings — though none have gotten close enough to touch, or even talk to, the ghost of Mr. Bennet themselves. The story goes that you can see him as you hike along the trails near the lake, starting from County Road 31. Maybe your experience will be nothing more than another mysterious sighting, and maybe no one will believe you — but it seems that if a twist on one of the area’s most legendary ghost stories were to unfold, there’d be no better time for it to happen than Halloween.

What to know for visiting Estes Park in 2020 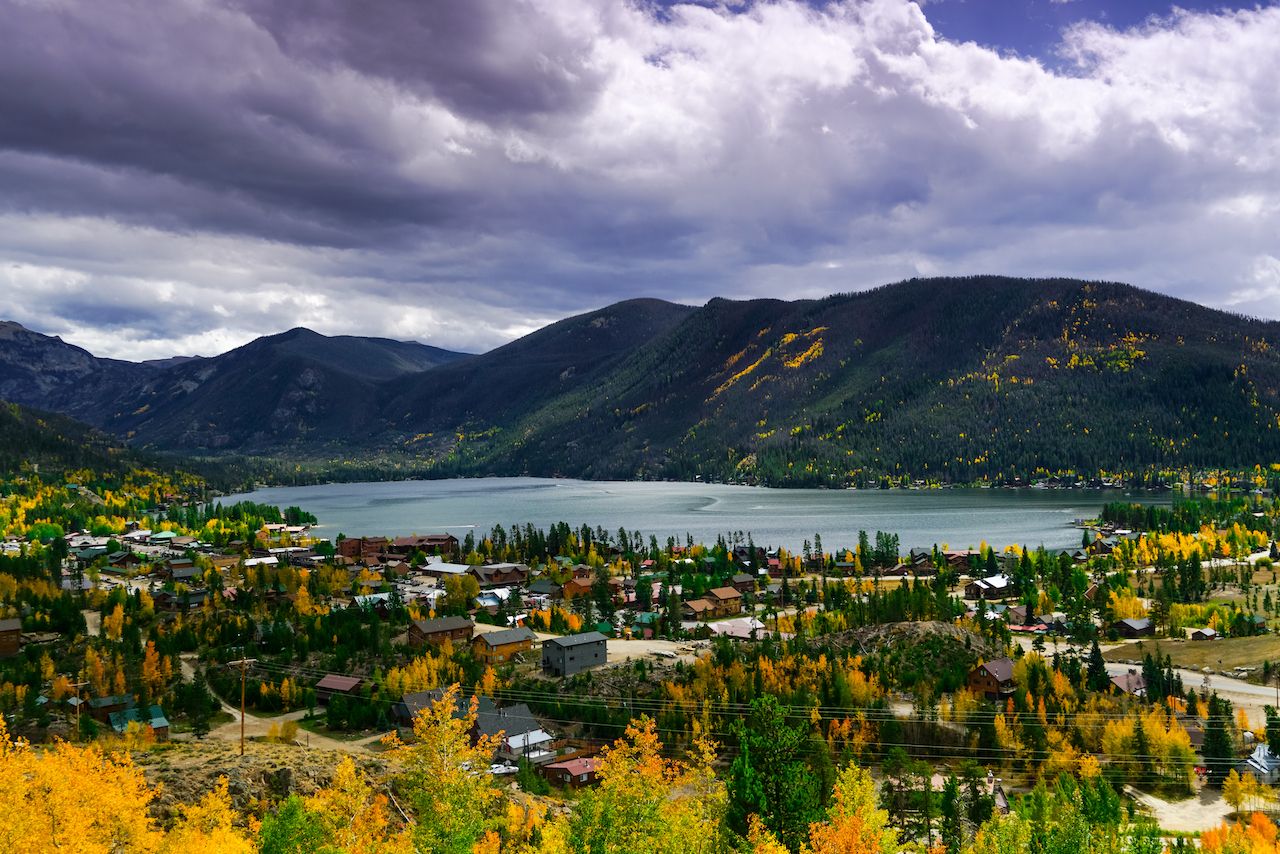 As with live events around the world, the COVID-19 pandemic has halted or altered Halloween celebrations in Estes Park. All non-recurring events at the Stanley Hotel, including concerts and parties, have been canceled or postponed. Hotel tours — including the popular Night Tour — are still on, but with restrictions. Each tour hosts up to 10 people and requires advanced reservations. Current Colorado policy requires a mask or face covering in all public places, including on the hotel tours.

In lieu of the usual Halloween revelry, you could camp just outside town. The Mary’s Lake Campground puts you near both trails and on-water activities on an established site with RV hookups and restrooms. While its 125 spots require reservations and cost at least $45, dispersed camping is available in the Arapahoe and Roosevelt national forests free of charge (thank you, public lands). Reservations are required for entry to Rocky Mountain National Park before 5:00 PM, though you can drive, hike, and spot wildlife after that time without a reservation. If you plan to camp inside the park, be sure to reserve your permit or campsite in advance.

As for downtown celebrations, the Estes Park Visitors Center has not announced plans as of yet, citing the need to follow any restrictions and mandates that may be in place. Large gatherings will likely not be permitted. Check its website for updates.

A version of this article was previously published on September 17, 2018, and was updated on August 18, 2020, with more information.