When planning a cross-country road trip with my mother from the Bay Area back to the East Coast, I sought out eccentric accommodations with a strong sense of place at every pit stop — from a teepee in the Nevada desert to a train caboose in Oklahoma. My search for a spot to stay in New Mexico required the least amount of research. In fact, it was the first place I booked. A former 19th-century brothel and saloon in Albuquerque? That also bills itself as a bed and brew? Instant done deal.

The illustrious history and refreshments at The Painted Lady Bed & Brew were enough to pique my interest. For my mother, there was a different draw. She’s known to overload the DVR with marathons of The Dead Files, and she relished the potential to stay somewhere haunted. Nowhere on the website did the property claim to host any ghosts, but with such a macabre past, she insisted there had to be a spirit or two floating around.

The Painted Lady is situated in a quiet industrial neighborhood that’s a short walk from the adobe buildings of Old Town. There’s only a handful of apartment-style suites, all with a modern Southwestern aesthetic, which adds to a sense of neighborhood intimacy. Rooms exit directly to a covered porch adorned with hanging ristras of hatch chilies, desert flora, and Adirondack chairs. Red string lights criss-cross above the walkway, and games like giant Jenga and cornhole dot the patio, which also has a swing set and a cushioned fire pit. The technicolor Painted Lady mural overlooks the giant showpiece of the hotel: a vintage, bright-red Albuquerque trolley car. The whole vibe feels like the backyard of someone’s exceedingly cool home — because it is. 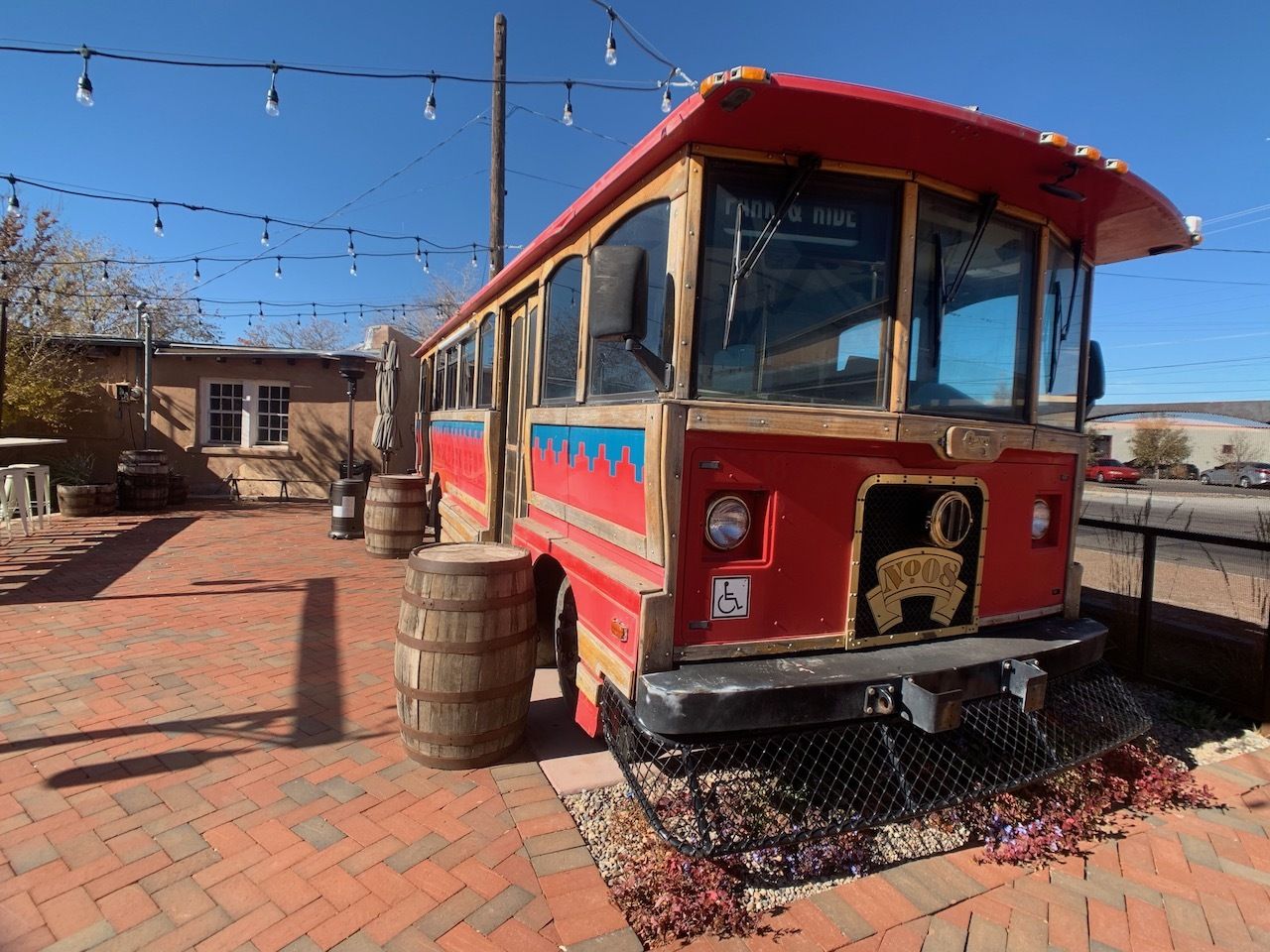 During our stay, live-in owner Jesse Herron met us with a triple tier platter of canned craft beer and a basket of snacks, and he flipped on the red lights as we all pulled up stools. Herron, also the longtime co-owner of an Albuquerque tour company, doesn’t just serve the beer. He’s also the one decorating the suites, taking reservations, and planning events like magic shows on the patio. Over seven years in the making, the Painted Lady is Herron’s passion project.

Armed with proper questions to ask Herron about Albuquerque’s cultural revival and the challenges of the boutique hospitality industry, my mom beats me to the punch with the question I feared she’d interject with: “Have you seen any ghosts?”

Before I can pivot back to business, Herron enthusiastically responds, “Oh yeah,” and launches into tales of the ghosts of Old Town’s past. I kick back with an ale and listen to the kindred souls rhapsodize about the supernatural. 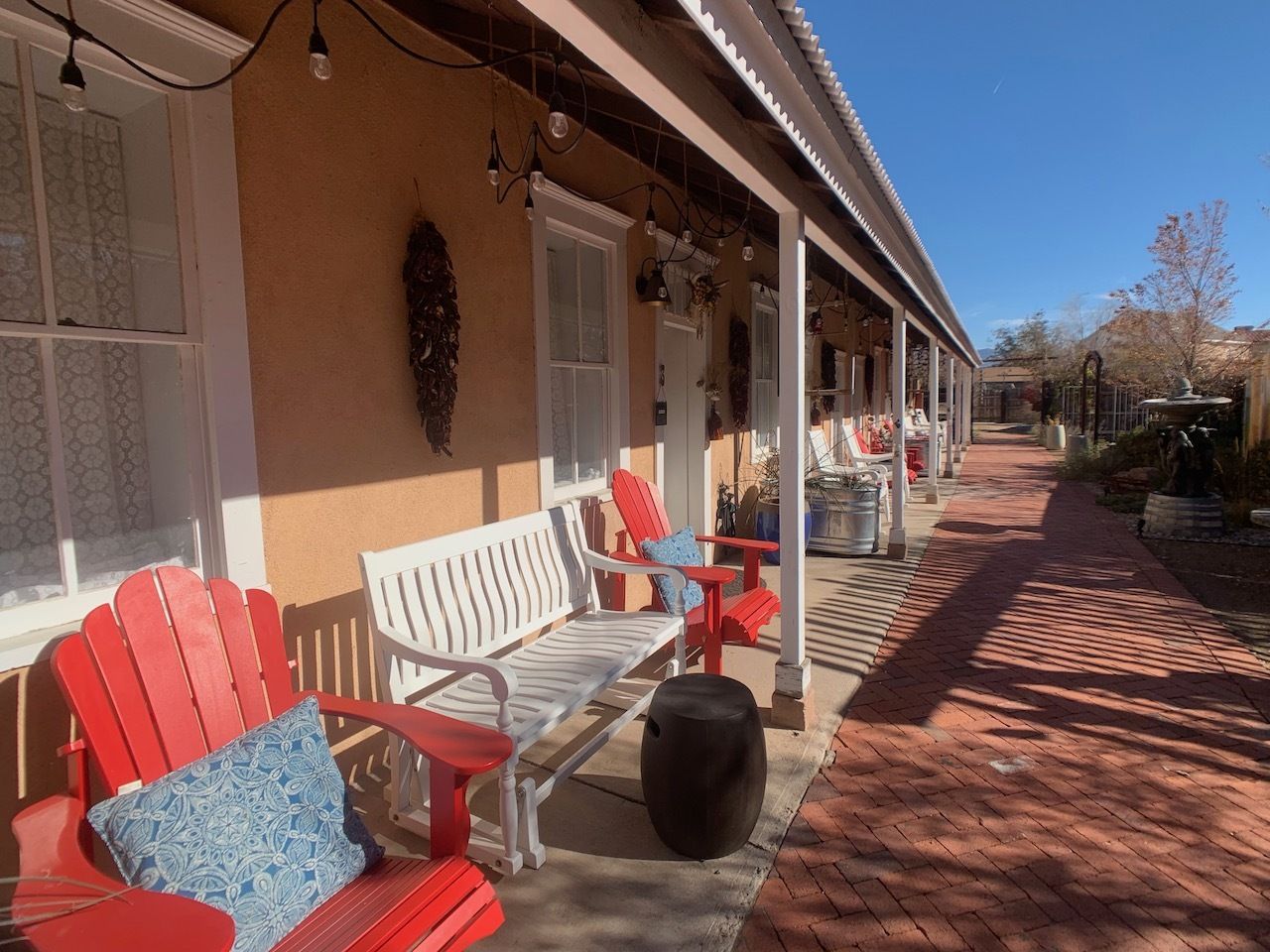 The original saloon was built in 1881 and quickly gained a sordid reputation. Before you conjure up a glamorized image of the Old West with a ragtime piano playing in the background, know that this was not a high-end parlor. This was a “crib” brothel, an in-and-out sort of place across the sawmill, where women saw upward of 50 customers a day and violence made newspaper headlines. Thus, its ghosts do not exactly have Casper’s disposition.

“The building was on the market for two years and it was basically abandoned, it was terrible,” Herron said. “So I was standing out on the street and this guy comes up and asks if I’m thinking about buying this property, and I say ‘yeah.’ He says, ‘Do you know the history?’ And I say ‘Well I know a little bit…’ and he says, ‘You don’t know shit.’”

The man claimed to be related to the family that owned the brothel. He said the owners would never go into the room Herron was planning to turn into the master suite (it’s now his office), because it was “haunted as hell” by the victim of a gory axe murder. As the months went by, Herron began to feel the negative presence of the spirits of two females and one aggressive male who he believed was tormenting his dog. Multiple psychics, one Buddhist priestess, a German seance, and a smoking demon trap later, Herron was finally able to exorcise the malevolent male (a 19th-century top hat-clad man named Bill, so says a psychic). With Bill gone, more friendly spirits were left behind to cohabitate with the Painted Lady guests.

“My mom yells at me ‘Don’t tell people that story!’” Herron said as we sat on the stools. My mom, on the other hand, could not be more thrilled. 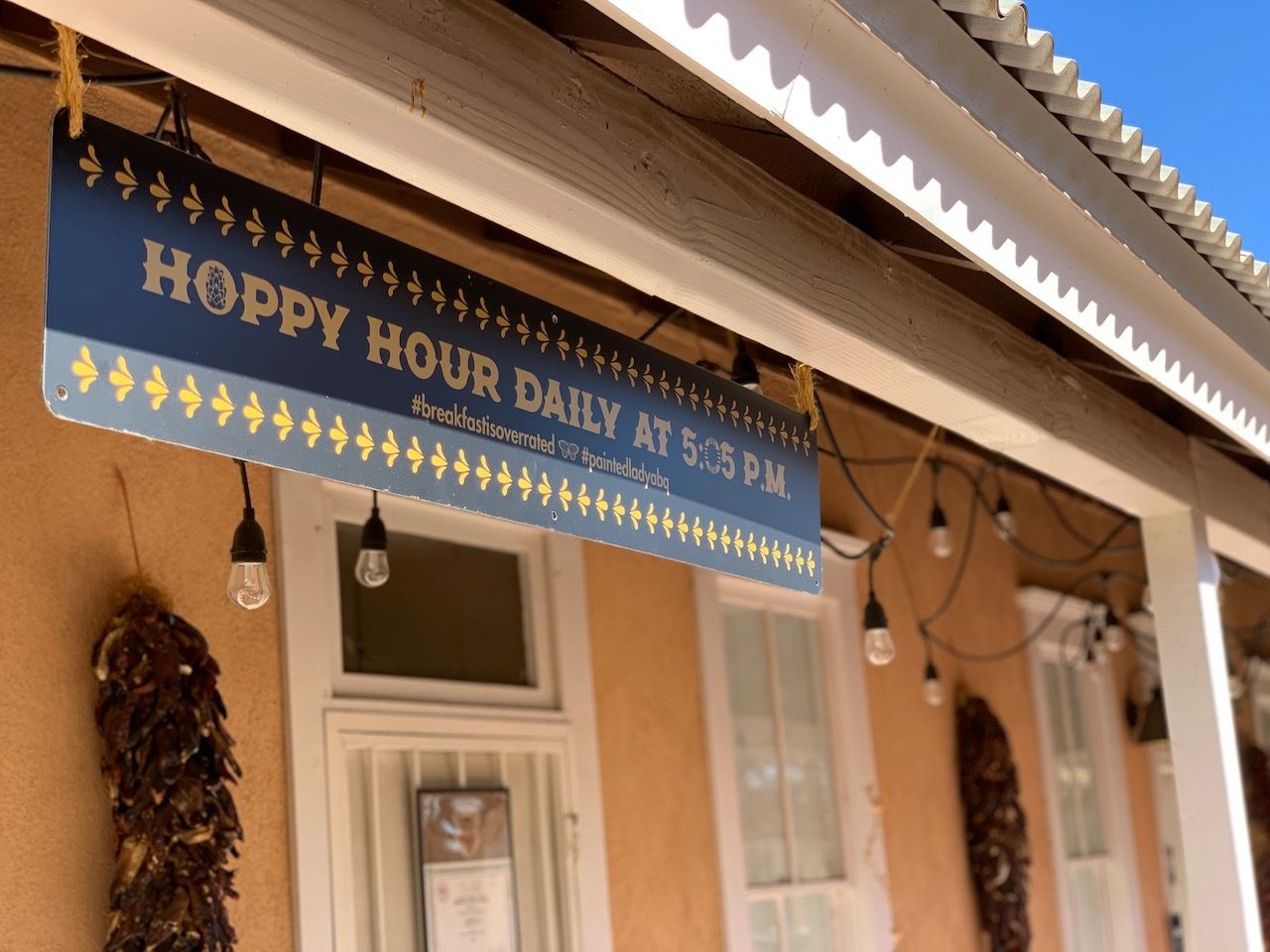 If you remain supernaturally skeptic, as I tend to be, the Painted Lady has a much more delectable draw: Hoppy Hour. Every evening, guests can saunter to the patio for some complimentary local craft brews at 5:05 PM (the ABQ area code), not-so-sharp. (“I’m always late also, so 5 o’clock? I can’t get here,” Herron jests. “I gotta walk all the way down the sidewalk. But 5:05? I’m good to go.”)

Herron’s decision to serve cans of beer to guests is partly because of his love for the craft, partly because breakfast was never a viable option. But his lack of culinary prowess doesn’t affect his knack for hospitality. Over a dozen different cans are up for grabs, all handpicked by Herron. I opted for the Peach Dynamite kettle sour from Steel Bender Brewyard followed by a red ale from Marble Brewery. Herron also uses the time to connect with guests and offer his neighborhood recommendations, including what other nearby breweries to hit to complete a beer-themed trip to Albuquerque. 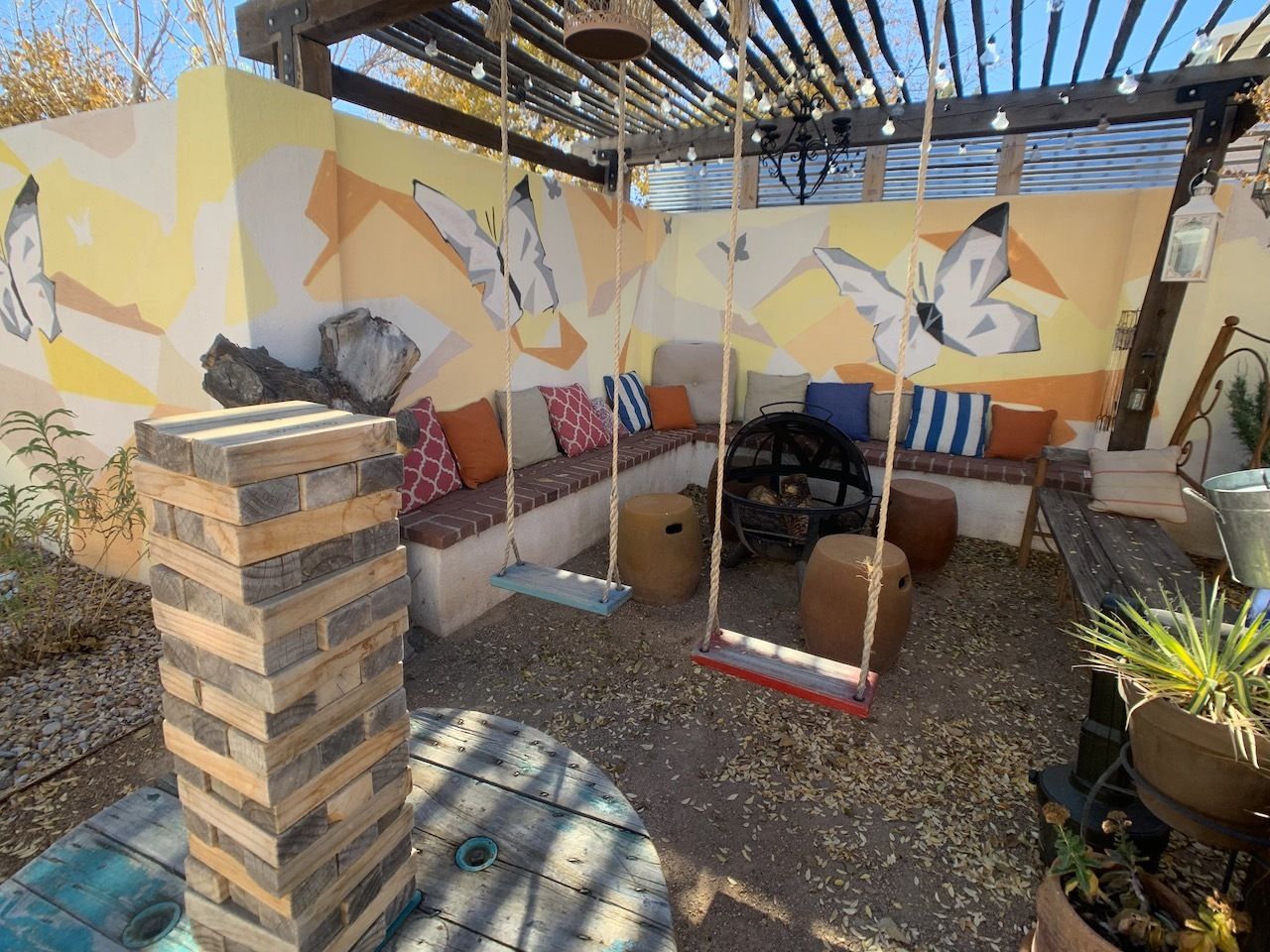 “When I first moved here, there was one brewery within walking distance, and now within a one-mile radius of the property there are about seven breweries and two distilleries,” Herron says. “So it’s turned into this little brewery district. You can stay here, have beer here at Hoppy Hour, and then you can go walk through the neighborhood.”

Whether you go on a brewery crawl, spend the day exploring the markets of Old Town, or venture higher into the Sandia Mountains, your porch chair will be waiting for you to unwind in. And if you think you feel a cool breeze or a tap on the shoulder, maybe leave another can cracked open — just in case.