When people think of Chicago, skyscrapers, Lake Michigan, comedy clubs and music venues, shopping, and museums usually come to mind. And honestly, most people don’t come to Chicago for nature, but the Midwestern metropolis has a surprising amount of unique, protected natural spaces.

Sure, Chicago doesn’t have any 14ers with scree-filled summits to conquer, but the Windy City makes up for it with rolling hills, wetlands, dense forests, rivers, and, of course, stunning views of Lake Michigan. Plus, thanks to Chicago’s distinct seasons, the same hike can offer a completely different experience if you hike it in summer or winter.

Chicago is also a birder’s paradise, so you can ditch the bear canister and have more room for your binoculars. And there’s no risk of mountain lions, either. Honestly, the biggest concerns you’ll encounter on hikes near Chicago are quite small: mostly just mosquitos and ticks.

From dirt to concrete to sand, along the water or deep in the woods, there’s a lot more variety to the hikes near Chicago than you’d expect. And it’s that natural diversity that keeps outdoorsy people in Chicago — or at least brings them back to visit.

One last important note: traffic. There’s lots of it, and in some areas, it lasts all day (looking at you, I-90). Drive times below were measured mid-day from the centrally located Art Institute of Chicago. Heading out of the city during late afternoon rush hour will considerably increase your travel time.

The Chicago Lakefront Trail: A paved trail with world-class views 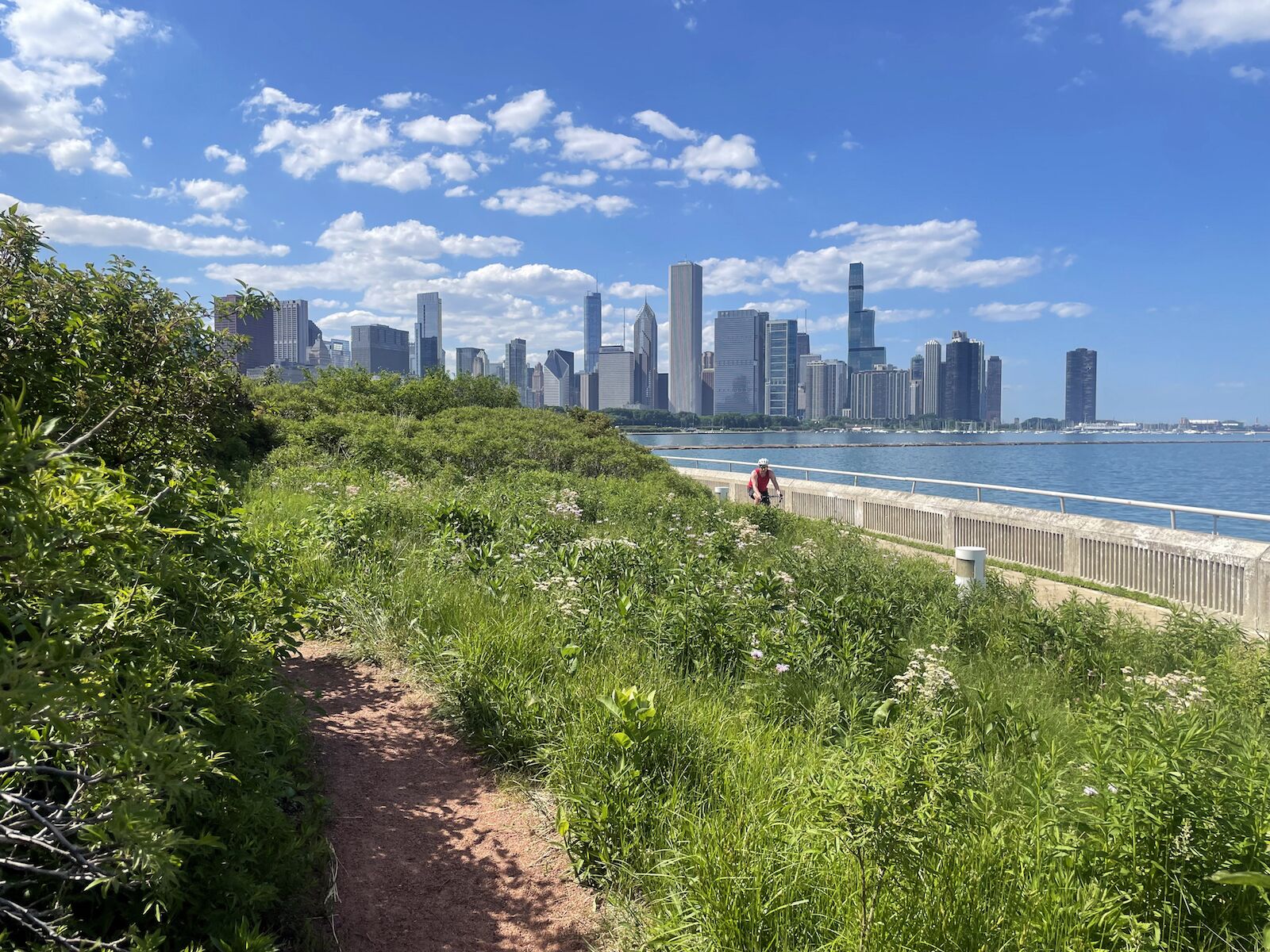 This trail offers the best views of downtown Chicago and Lake Michigan as well as access to nearly all the hot spots along the Lake Michigan shoreline. It more or less parallels Lake Shore Drive, which runs along Lake Michigan through the heart of the city. It’s exposed to the elements most of the way, so dress for the weather.

Expect crowds on weekends and holidays and during evening rush hour when many Chicagoans use the trail to commute home or exercise after work. The paved trail has separate lanes for bicyclists, making walking safer and more enjoyable. You’ll catch the best skyline views if you start south of downtown and head north.

The lakefront trail leads to all the major beaches, Lincoln Park, Navy Pier, the Chicago Riverwalk, Millennium Park, Grant Park, the Museum Campus, and Soldier Field. Check out this interactive map to browse all the great attractions you can reach from the trail. 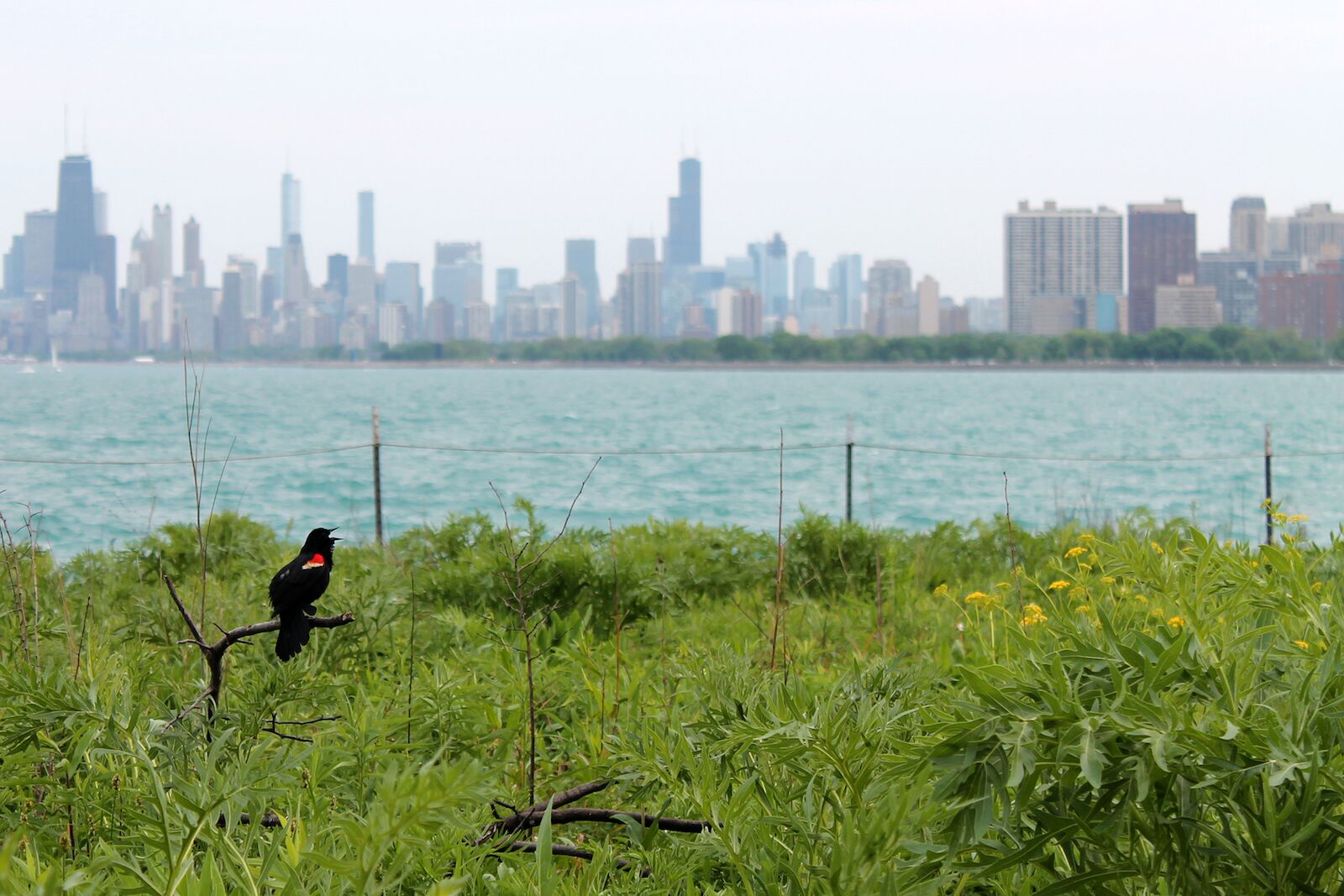 The Montrose Point Bird Sanctuary provides 10 acres of much-needed space for winged wildlife along the shores of Lake Michigan. The sanctuary is a hot spot for birds, birders, and hikers alike during fall and spring. Between the sanctuary and the adjacent dunes, tens of thousands of birds representing over 300 species stop here during their yearly migrations. Outside migration seasons, you’ll still see lots of birds – mostly those common to Chicagoland, like Canadian geese, robins, seagulls, and red-winged blackbirds.

The sanctuary is small. You can hike across it in under five minutes on a .5-mile paved, accessible loop. The fun comes with following the dirt trails that branch off in all directions, winding through thick woods, providing shelter from the blazing summer sun and relentless wind off the lake.

Be sure to follow the dirt trail between the edge of the trees and the prairie on the southern and eastern sides for unparalleled views of the Chicago skyline. The sanctuary has several entry points, all well marked with helpful “you are here” maps. Be sure to pack your bug repellant, sunscreen, snacks, and binoculars. 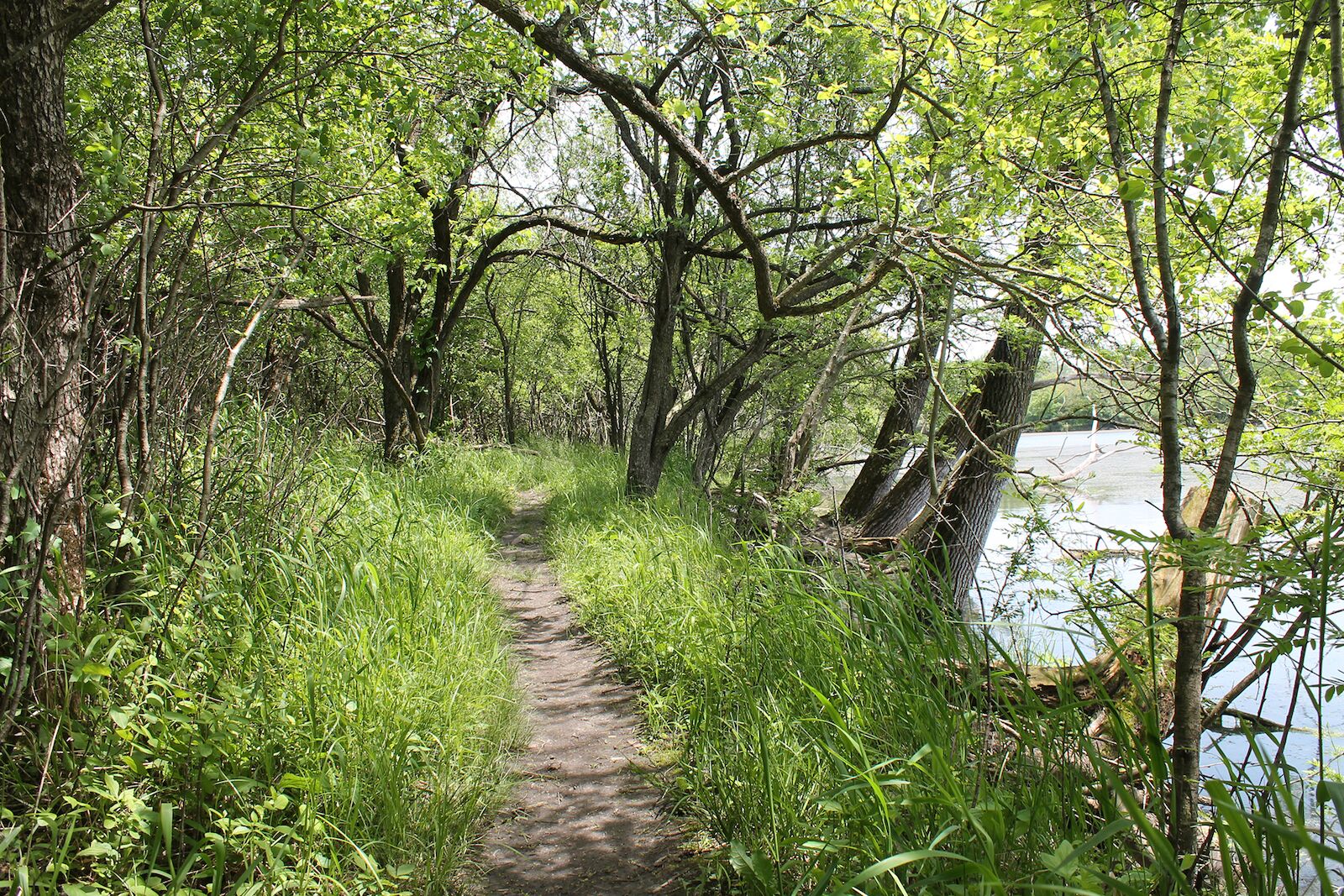 If you’re in Chicago and looking to put literal dirt beneath your feet, the Inner Trail at Skokie Lagoons is where it’s at. Hike there in spring, and expect to spend at least part of your adventure squishing mud between your toes.

The Inner Trail has no trailhead or signage along the way, which is part of the fun. It begins on a dirt path from the parking area. Follow it to the north end of lagoon number six, where you can hop on a few trails around the lake or into the woods.

Much of the trail is wide but some sections near the water narrow down to singletrack as they wind through the woods. Expect to crouch under a few downed trees and know that most of the little bushwhacked paths lead to muddy sections in spring.

The lagoons are teeming with wildlife, including deer, ducks, foxes, and herons. You can see animal tracks all year (though they’re especially noticeable after a fresh snowfall) and in spring, parts of the lagoon are lined with wildflowers. In summer, ticks and mosquitos make their presence known, and it’s one of the best hikes near Chicago come fall for strolling beneath the colors of autumn foliage.

You can also combine this with the Skokie Lagoon Trail, an 11ish-mile loop with rolling hills.

Waterfall Glen Forest Preserve: For a swim or longer hike through the woods 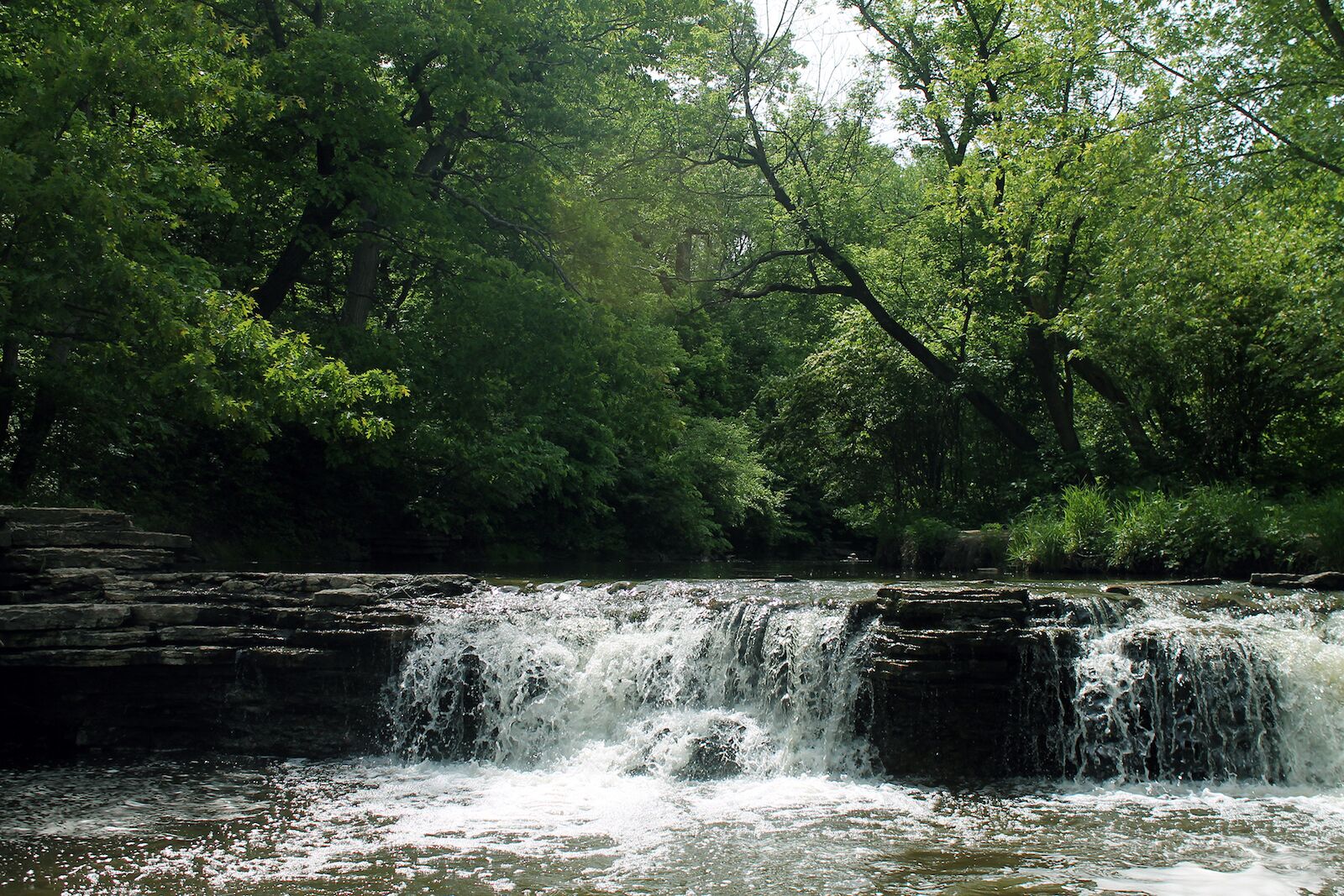 One would assume the Waterfall Glen Forest Preserve was named for its main attraction: a small, rocky waterfall. Not so. Originally named “Rocky Glen,” the preserve was renamed to honor Seymour “Bud” Waterfall (yes, his last name was Waterfall), who worked for the forest district.

If you want to start with the highlights – the waterfall and the Sawmill Creek overlook – don’t park at the first signed parking area for Waterfall Glen. Instead, keep driving to Bluff Road and park in the loop near the Waterfall Glen Youth Campground. To reach the falls, you’ll follow the main trail for less than a quarter-mile, then take the offshoot for the Rocky Glen trail on the right (here’s a trail map). From there, it’s only about half a mile to the waterfall and Sawmill Creek overlook, no matter which of the few paths you choose to follow. You’ll also find a few prime spots to take a dip in the creek or swim in the waterfall pool.

Fun fact: if you come in the winter, you can cross-country ski. Rangers groom the main trail when there are more than four inches of snow on the ground. 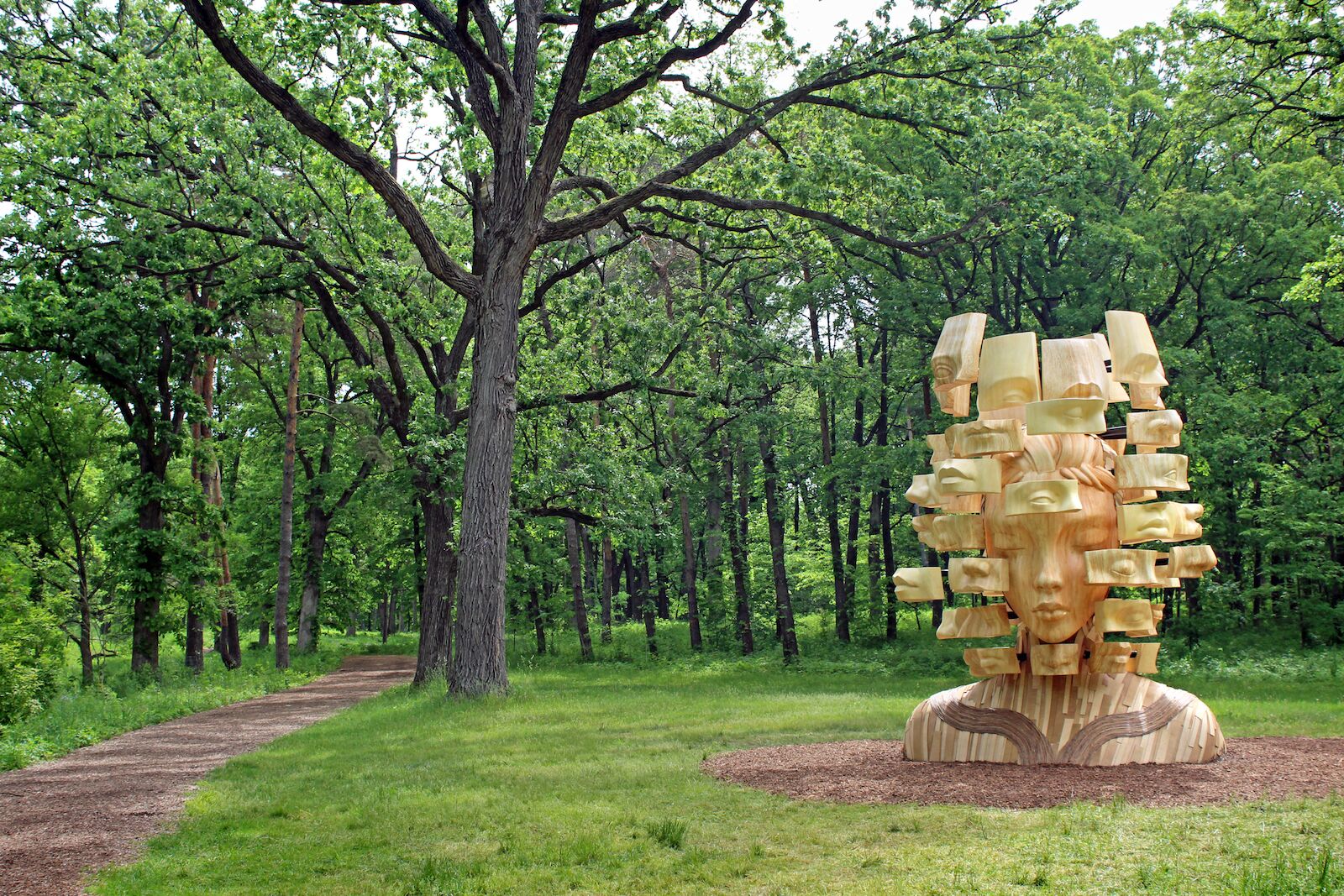 With over 16 miles of pedestrian-only trails, visitor centers, a hedge maze, lakes, sculptures, and a children’s garden, the Morton Arboretum has a lot to offer regardless of what kind of trails you prefer. It’s one of the best hikes near Chicago for nature near the suburbs and for accessible hiking options. Buy your tickets in advance if you can; adults get $5 off on Wednesdays.

The sheer number of options of trails and parking lots within the arboretum can be overwhelming. Save a copy of the trail map on your phone or pick up a paper copy at the entrance. That said, the signage is impeccable, and there’s very little chance of getting lost for very long, even if you fail to pocket a map.

The hike to Big Rock via either the Heritage or Woodland trails (or a combination of both) is a must-do. Make your way to the Big Rock Visitor Station on the east side (parking lot 13). The drive there is gorgeous, winding past meadows and marshes and through forests. You can also hike to it from anywhere else in the park. The “Big Rock” itself isn’t that impressive (it’s a granite boulder deposited by the glaciers), but that part of the arboretum doesn’t see as much traffic. So even on busy weekends and holidays, it’s easy to find solitude in the densely wooded section of the forest.

On your way out, check out the ginkgo trees near the East Side store and cafe. Their fan-shaped green leaves turn yellow and all drop on the same day, known as “Ginkgo Drop Day.”

The Cowles Bog Trail: A variety of landscapes on one trail 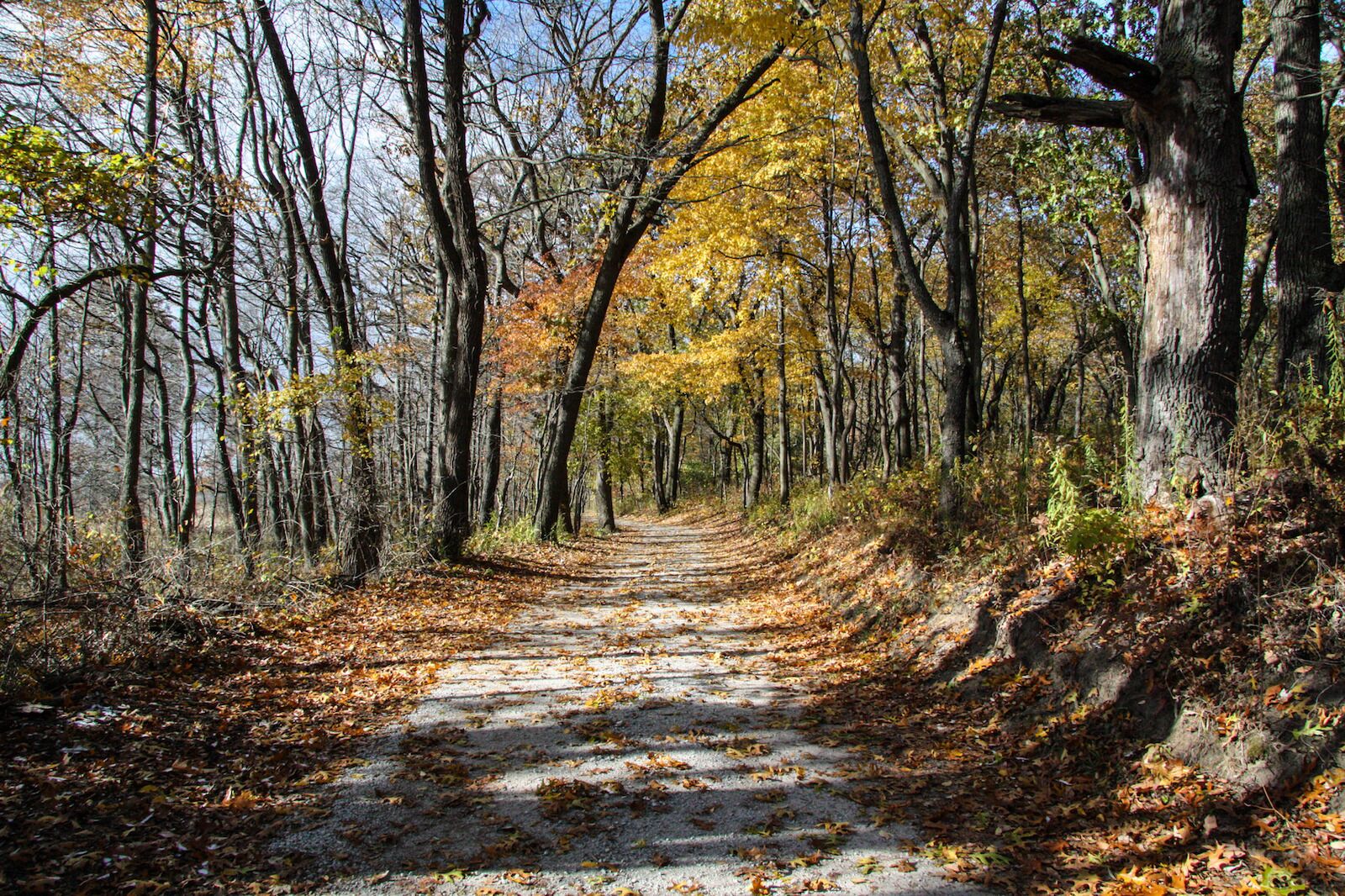 While your favorite navigational app will tell you it takes just over an hour to drive to Indiana Dunes National Park from downtown, it must be said outright that this route has arguably the worst traffic in Chicago. Expect the drive to take twice as long if you leave on a Friday evening, Saturday morning, or holiday weekend.

But it’s worth it. The Indiana dunes are an incredibly unique hiking experience worth the drive time (and the $25 entrance fee, unless you have a national parks pass).

When you arrive, head to the Cowles Bog Trail. The 4.7-mile hike accesses small areas that represent the ecology of the dunes: ponds, marshes, savannas, and the beach.

The most memorable part of the trail is hiking up (then down) the steep dune heading to Lake Michigan. Depending on the haze and clouds, you may even catch a glimpse of the Chicago skyline from the beach.

The 3 Dunes Challenge: Fire in your quads, sand in your shoes 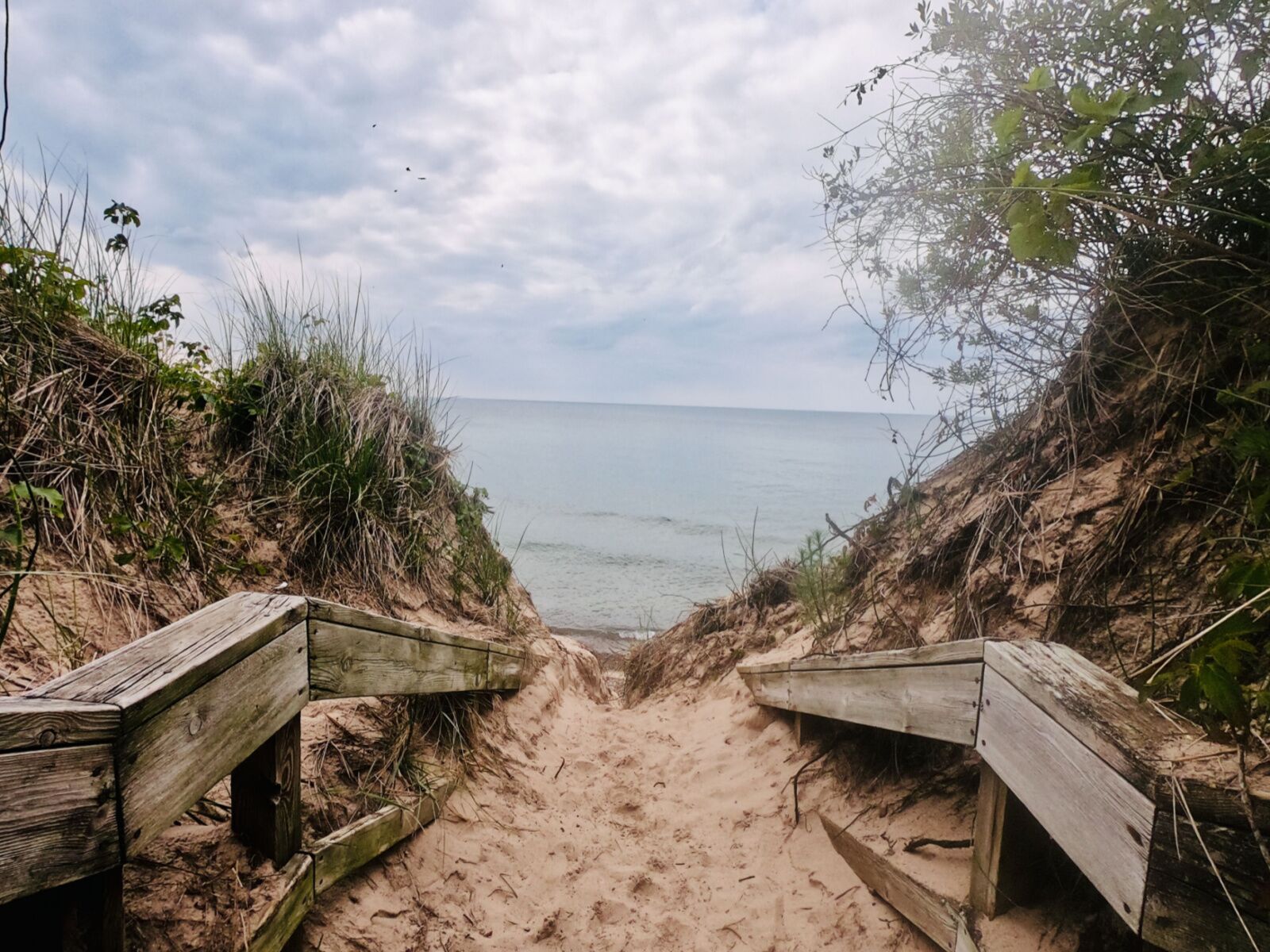 Indiana Dunes isn’t just a national park – it’s also a state park, which has some of the best hikes near Chicago. If you’re headed there, take the 3 Dunes Challenge to summit the three highest dunes in the park – Mt. Jackson, Mt. Holden, and Mt. Tom – using Trail 8 and Trail 4. Both are sandy, so choose your footwear accordingly.

Though not a part of the official challenge route, Trail 7 intersects with Trail 8 and leads to the beach if you want to jump in the water for a bit. When you arrive, park at the nature center, and be sure to stop in for a free commemorative “3 Dunes Challenge” sticker.