Border walls are a testament to humans’ obsession with boundaries and our preoccupation to constantly define ourselves against those who exist on the other side. They are among the most important and consequential man made monuments, and understanding them is crucial to understanding the history of human civilization — something as simple as a stretch of raised brick, stone, or concrete can forever impact a region and change how it develops. Many of the world’s most significant border walls still survive today and can be visited. Here are the ones that should be on your list. 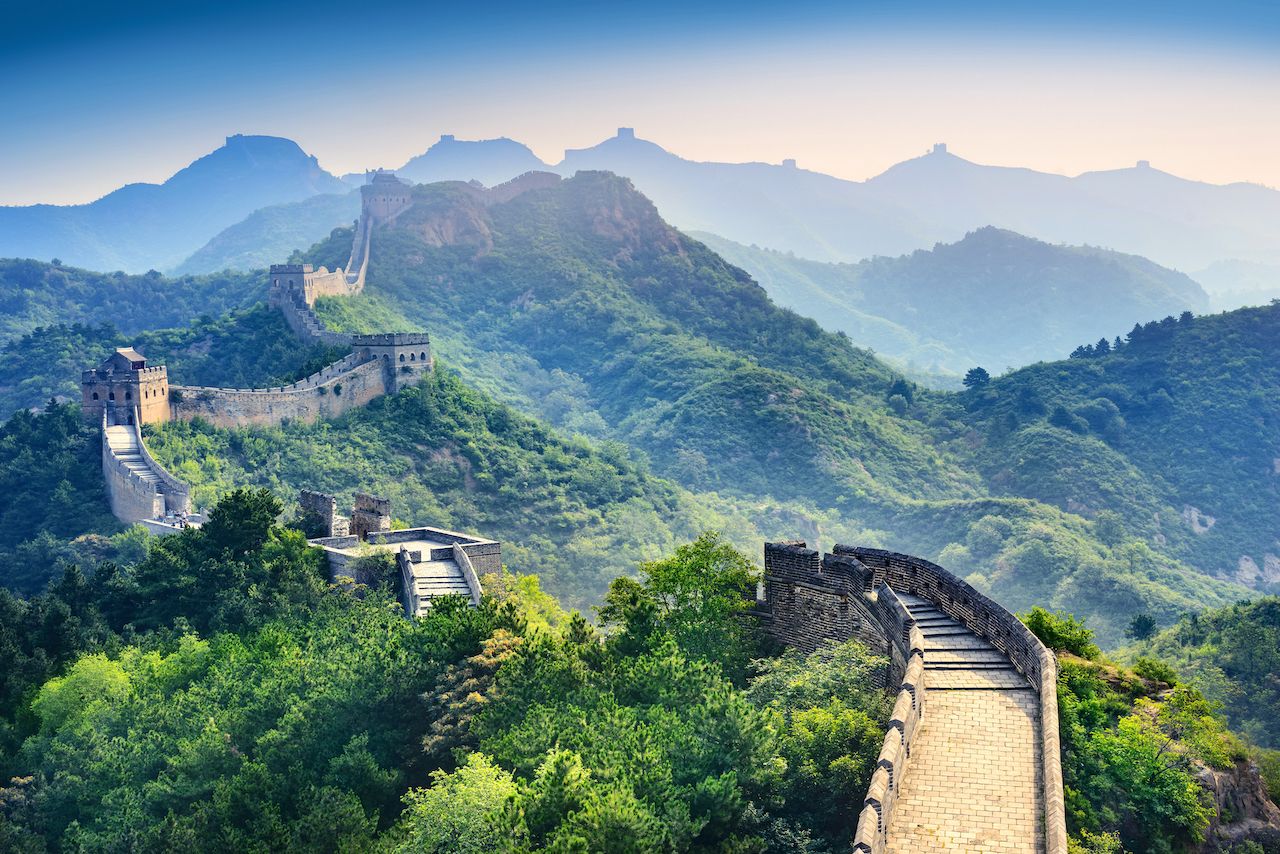 The Great Wall of China is probably the world’s most well-known barrier wall, though while marveling at its architectural brilliance, it can be easy to forget that its purpose was strategic. The stone, wood, and earthen wall spans over 13,000 miles from the Gobi Desert to the border of North Korea. Its construction began in the third century BC to defend against the Mongols, but sections continued to be built all the way through the 17th century, when the Ming Dynasty wished to strengthen its position against the steppe nomads to the north. Watchtowers along the length of the wall were used to communicate via smoke and fire signals, and gates were used to manage the flow of trade and migration.

Although it is indeed epic in proportion, and was once the largest man-made object in the world, it wasn’t exactly the most effective defensive barrier. Mongol leader Altan Khan bypassed the wall in 1550 and sacked Beijing, and in 1644, the Manchus broke through the wall, resulting in the fall of the Ming Dynasty.

No longer used as a defensive structure, the Great Wall is now one of the world’s most popular tourist attractions, and arguably China’s most famous structure. 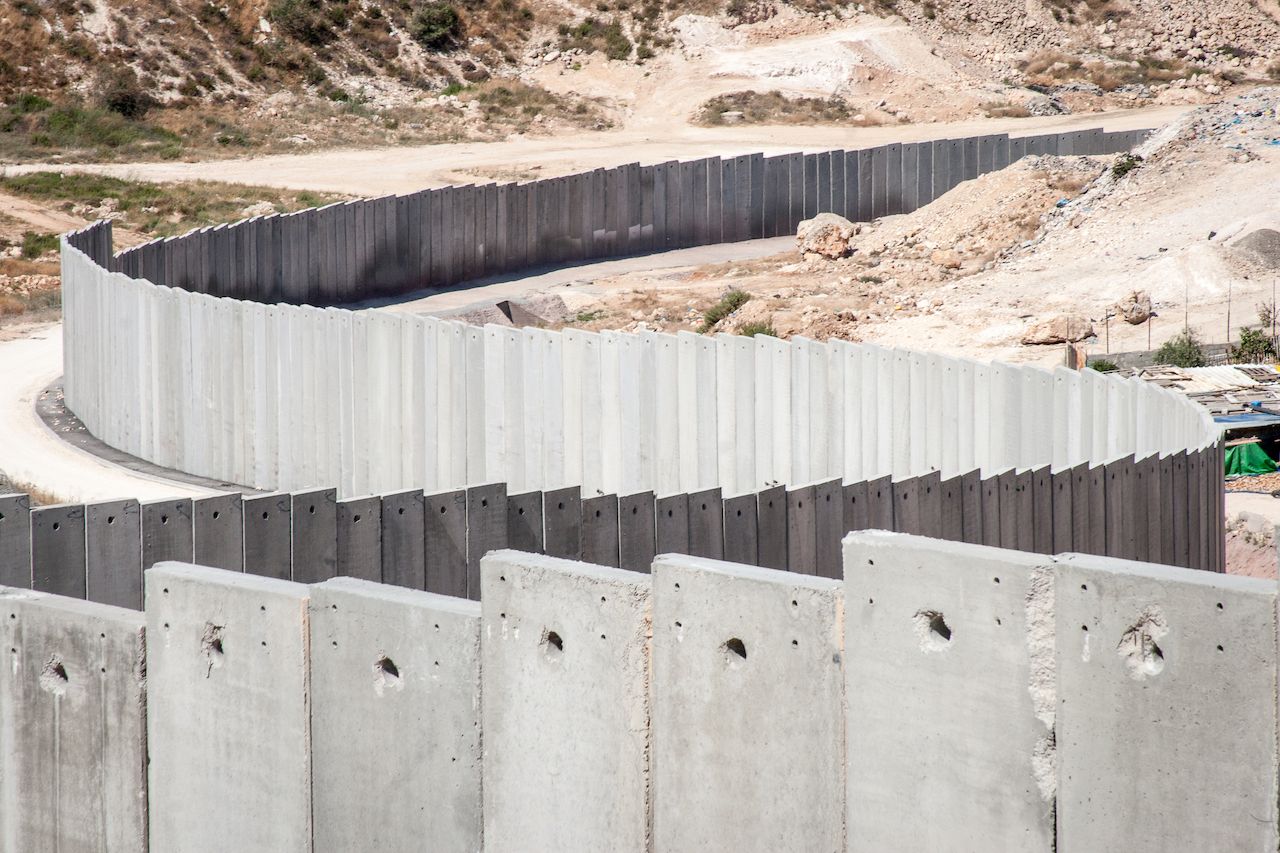 A far more modern example of a border wall, though built for exactly the same purpose, is the West Bank Wall built by Israel in 2002. The goal of the 435-mile concrete wall was to protect Israel from Palestinian suicide bombers, and though there had been a decline in the number of attacks since the wall was built, it has nevertheless generated much controversy.

Many believe the wall is not directly responsible for the reduction in attacks but rather political and military moves by the Israeli government combined with Hamas’ discontinuation of suicide bombings. As it completely cuts off the West Bank from other Palestinian areas, some have also called it a human rights violation, as well as an attempt by Israel to secure Palestinian land.

While Israelis consider the wall a defensive necessity against terrorist attacks, Palestinians believe it is a means of racial segregation and refer to it as the “Berlin Wall.” Perhaps more than any other wall that stands today, the West Bank Wall shows how a single structure can be viewed completely differently by two opposing sides.

The Sumerians, one of the world’s earliest known civilizations, were building walls all the way back in the 21st century BC. To keep out the rival Amorites — nomadic tribes people who had been making unwanted forays into Mesopotamia — Sumerian rulers Shulgi and Shu-Shin constructed a fortified barrier. It stretched over 100 miles in what is now Iraq, between the Tigris and Euphrates Rivers, and is believed to be the first extensive defensive barrier not built around a city.

It was first was quite successful in keeping the Sumerians’ enemies at bay, but it was soon overrun (or simply circumvented), after which Sumeria was under attack from multiple forces. Around the year 2000 BC, the capital of Ur fell, and Sumerian culture all but disappeared, though sections of the wall still remain. 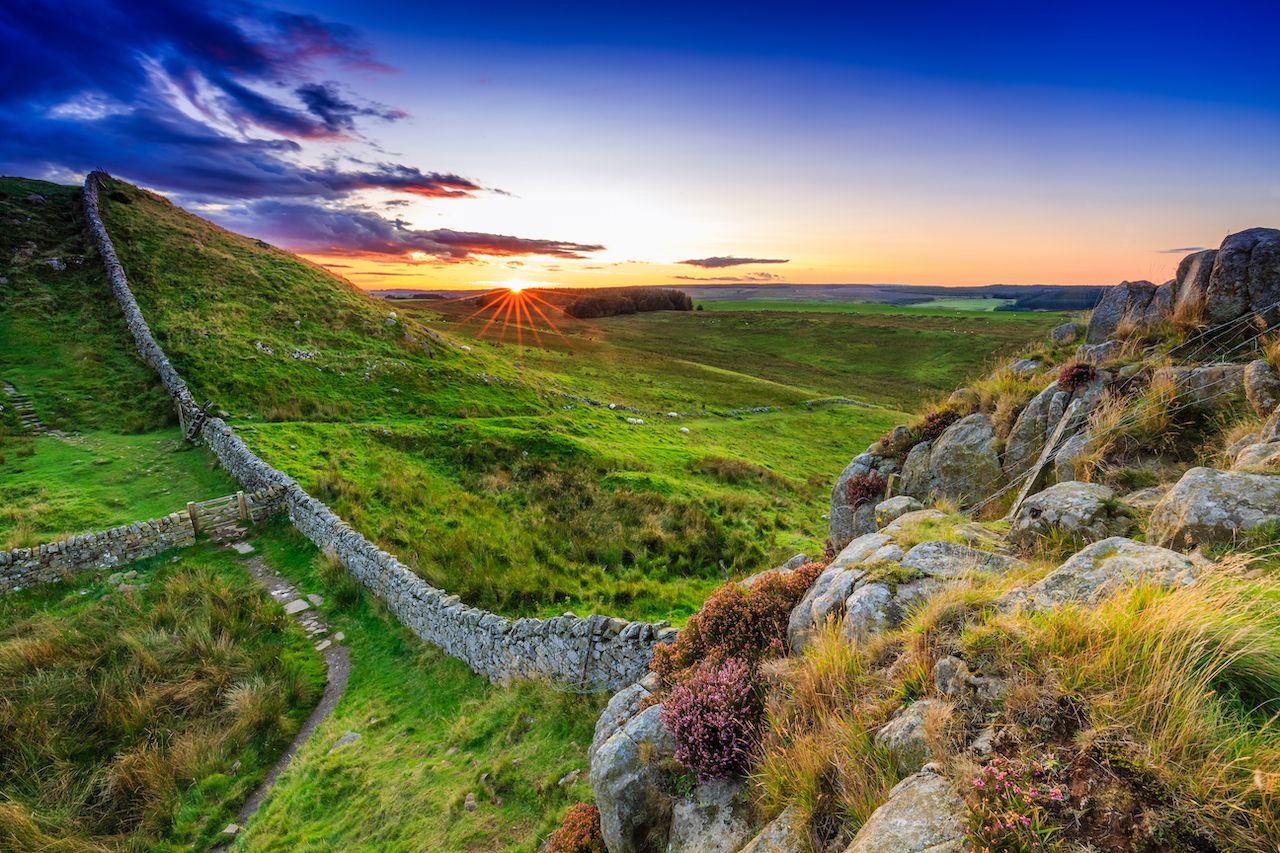 One of the oldest border walls ever constructed, Hadrian’s Wall spans 73 miles and was built on the orders of Emperor Hadrian in 122 AD. Hadrian built the wall from the Solway Firth on the west coast of England to the mouth of the River Tyne in the east, and wanted a solid border to protect Roman Britain from the Picts and other hostile hostile tribes in Northern England and Scotland. Ten-feet wide and 15-feet tall, the length of the wall is dotted by forts with gates one mile apart to allow soldiers to control movement in and out of the area. The wall was mainly used to protect against raids from the north, as well as to collect taxes.

Hadrian’s Wall remained a towering and effective structure until Rome’s withdrawal from Britain in the fifth century. What followed was 1,600 years of decay, made even worse by frequent looting for building materials. Now the wall is a shadow of its former self, both in size and integrity, but there are still several sections you can visit throughout northern England. Located in Northumberland, Housesteads Roman Fort is perhaps the best-preserved portion of the wall. It’s popular for both quick visits, as well as day-long hikes along the length of the remaining ruins.

Not quite as famous as the Great Wall of China, the Great Wall of Gorgan is nothing to sneeze at. Extending for 121 miles, from the southern edge of the Caspian Sea to the Elburz Mountains in modern-day Iran, the barrier was built by the Sasanian Persias around the fifth century. It also included over 30 forts, a garrison of 30,000 troops, and a series of canals that acted as a water supply system, as well as a defensive moat. At the time, it was one of the longest walls ever built and still remains the longest fort-lined ancient barrier between Central Europe and China.

Despite its enormity, however, relatively little is known about the wall’s history. Originally it was called “Alexander’s Barrier” as many believed that it was built by Alexander the Great. More recent research has suggested that the Persians used it to guard against the Hephthalite and other northern enemies.

You can still visit the wall’s remains near the modern town of Gorgan in northeastern Iran. 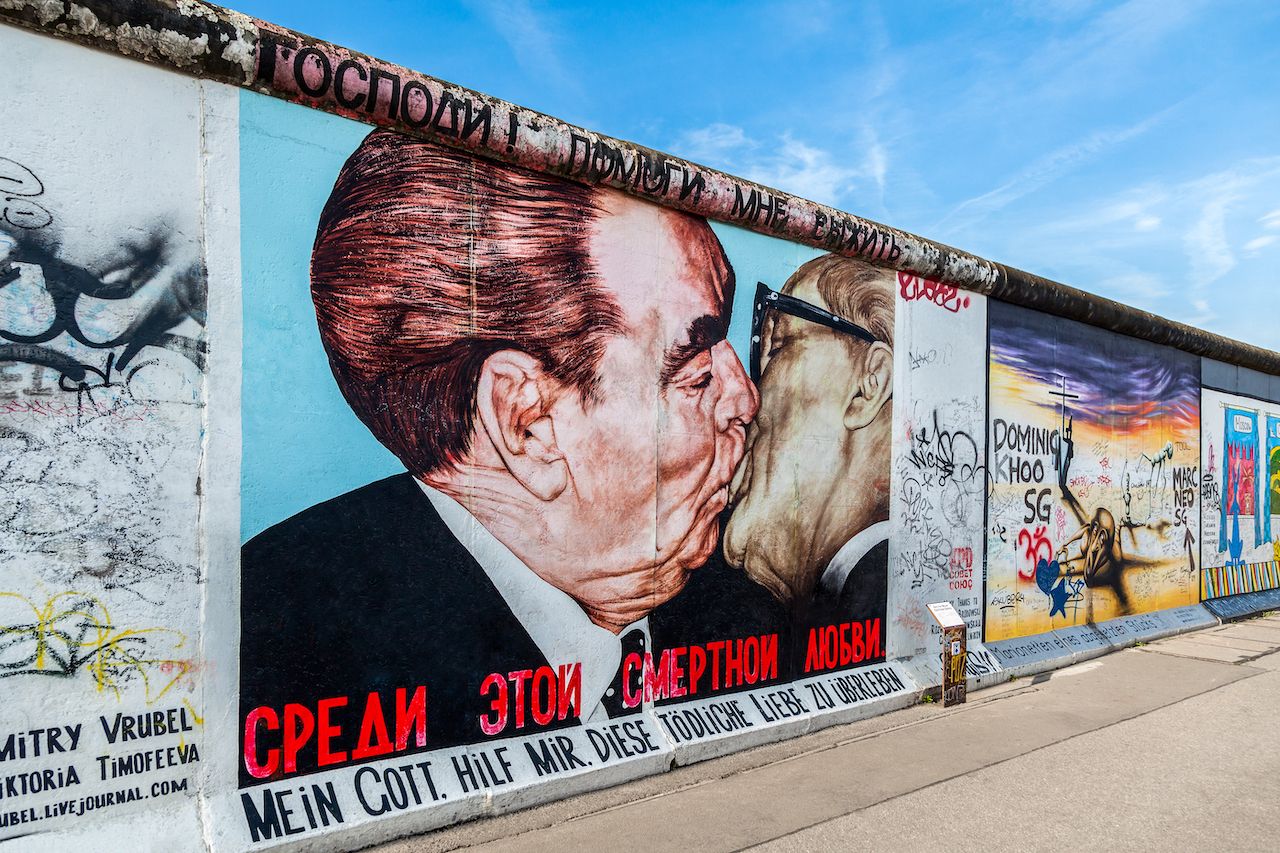 Perhaps modern history’s most famous border wall, the Berlin Wall recalls troubling memories for many who lived during the period when it was standing. Erected in 1961 after the fallout of World War II, the wall was built by the Soviet East German government, who claimed its purpose was to keep out fascists and enemies of the state. In reality, it was constructed to prevent East Germans from fleeing to the West and to keep them from learning about the vast disparity in quality of life that existed between East and West Berlin.

The wall was a maze of guard towers and electric fences, and many people were killed trying to escape. By the time it was eventually torn down in 1989, thousands had successfully escaped to the other side by scaling the wall, tunneling underneath, or even flying over it in homemade hot air balloons.

Parts of the wall still remain throughout Berlin, often covered in graffiti advocating for peace and acceptance. 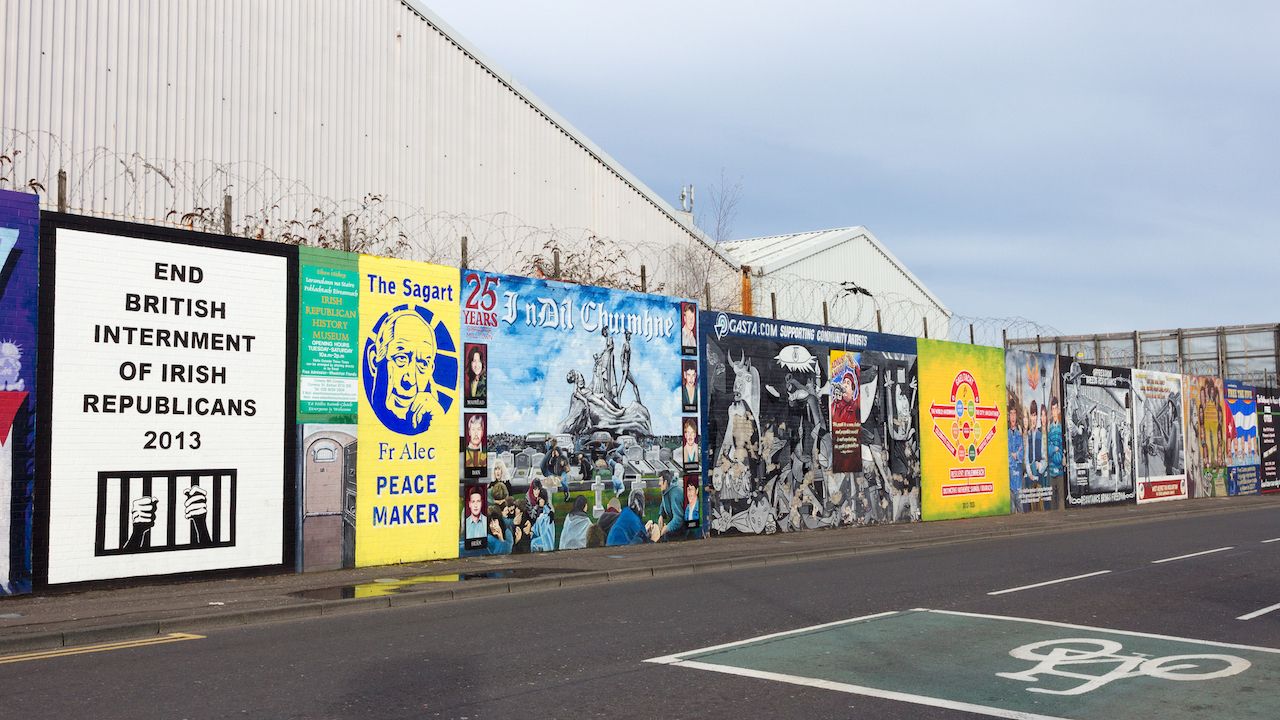 The Belfast Peace Walls were built to divide neighbor from neighbor. In this case, the division takes place on religious grounds, with the intent of separating Catholic and Protestant neighborhoods. Erected in the midst of Northern Ireland’s Troubles in 1969, the wall was a physical representation of the political conflict raging all over the country.

Around 100 walls and other barriers were built in total, with the purported aim of “keeping the peace.” Although these Peace Walls were meant to negate conflict, they ultimately created a hostile environment detrimental to communities all around Belfast. Despite their relative failure, the walls remained in place for decades, and it wasn’t until 2013 that the Northern Ireland government promised to begin removing all the walls.

You can still see the Peace Walls around Belfast, but you’d better get there quickly. The first wall was torn down in 2016, and the government plans to have them all destroyed by 2023. Although less dramatic than the fall of the Berlin Wall, the tearing down of the Peace Walls similarly represents improved relations and an important step toward peace.

Culture6 Places Where You Can Be in Two Countries at Once
Tagged
Activism Art + Architecture
What did you think of this story?
Meh
Good
Awesome